Würzburg is a beautiful old Franconian city, located in Northern Bavaria between Frankfurt am Main and Nuremberg. It heartily welcomes its guests with its fine masterpieces of medieval and more contemporary architecture, numerous monuments from different eras, picturesque views of the River Main, and, of course, the classical music concerts (with 300 being held here yearly), as well as the Mozart and Bach festivals. Würzburg has much to offer to its visitors, and in this article, you can explore its main city sights.

Be astonished by the grandeur of Würzburg Cathedral!

In Würzburg you can find a lot of small and big churches, but you should begin your tour with Würzburg Cathedral. This impressive church is the fourth-biggest Romanesque church building in Germany. You can see its proudly rising towers of 105 meters (344 feet) tall from afar, pointing to the entrance of the cathedral. Its construction was ordered by Bishop Bruno in 1040, and it was dedicated to Saint Kilian, the first bishop of Würzburg, who was also called the apostle of Franconia. In contradiction with the exterior of the church, which looks rather simple and without frills, the sumptuous interior literally amazes everyone who enters it. You will be profoundly astonished by its Baroque white interior, which is decorated with spectacular pieces of art including the baptismal font from 1279, a crypt with stained glass, and a wonderful seven-armed candelabra.

The next impressive construction, which is actually located not far from Würzburg Cathedral, is called Neumünster. This amazing Romanesque basilica dates back to the 11th century. It was erected on the site where Saint Kilian and his missionary companions were murdered. The altar inside the church depicts these people. Unlike Würzburg Cathedral, Neumünster will welcome you with its solemn Baroque façade in a brick-red color. Inside this baroque building, you will see noteworthy works of art, such as the statue of Madonna and a crucifix, the authorship of which is attributed to the famous sculptor Tilman Riemenschneider. In the west, the crypt is the sarcophagus of St. Kilian, the apostle of the Franks, while in the former cloister you’ll find the tomb of the medieval minstrel Walther von der Vogelweide, who died in Würzburg in 1230.

Discover the dark history of Marienkapelle! 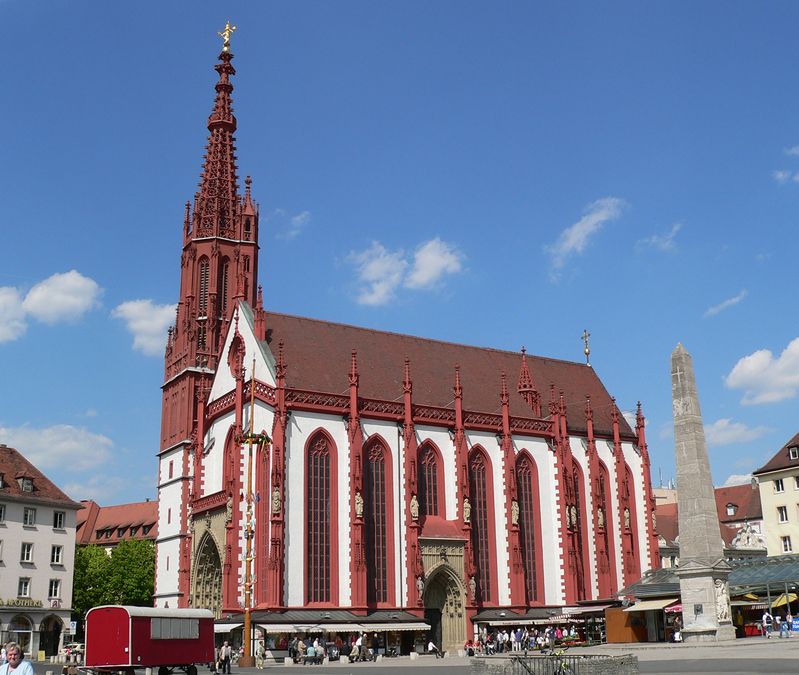 The next church, which is called Marienkapelle, is a “must-see” on this list. It has a rather dark history. Until the 14th century, the Jewish quarter was on the site of the church, and the market square was located near it. In 1349 a terrible plague erupted in the city, for which the citizens accused the Jewish community. This resulted in a b.r.u.t.a.l m.a.s.s.a.c.r.e. All Jews were k.i.l.l.e.d, their quarter was demolished, and a market was established in its place. There used to be a synagogue on the site, where nowadays the church stands. Obviously, it was also demolished. As a sign of atonement to God for the fact that this place had been desecrated by the synagogue, a Catholic church was built here instead. Today’s appearance was acquired in the twentieth century. During the Second World W.a.r, it was almost completely destroyed, and afterward, it had to be recreated from scratch. Architects tried to convey the sixteenth-century style as accurately as possible. So now Marienkapelle is one of the best examples of the late Gothic style. After exploring all the historical and cultural sights of Würzburg, you’ll obviously need some time out. So, here’s a tempting idea …

The main appeal of Würzburg is its picturesque location on both sides of the river Main, surrounded by hills, on the slopes of which vineyards descend. And it’s not by chance that the local wines are considered to be city attractions in their own right. In Würzburg and the surrounding area of the Franconia region, wine is bottled in Bocksbeutel, a special type of wine bottle in the form of a flattened ellipsoid. If you are eager to taste and savor the local wine, I suggest you visit MainWein Weinbistro, located right near the Old Main Bridge.

Be impressed by the amazing views from the Old Main Bridge! So if you are already at the foot of the Old Main Bridge (Alte Mainbrücke), why not know a bit of its history. This 180-meter-long bridge (590 feet), with statues of saints and bishops, is also one of the symbols of Würzburg. In 1720 the figures of six saints were positioned on it, and later another six historical figures, of kings and bishops who left their mark in the history of Würzburg, were added. Apart from the historical importance of this site, it also offers a breathtaking panorama. Take some time to enjoy the fantastic views of the fortress of Marienberg, the pilgrimage church of Käppele, and the famous vineyards in the area.

Immerse yourself into the Franconian culture!

Würzburg is undeniably a thrilling destination to visit. It is a place that not only lures you into its rich history and culture but also gives you an insight into the Franconia region of Germany. Here you’ll see Germany from a different perspective while discovering a different culture and dialect. So don’t miss the chance to dive into a new destination, and enjoy the wide range of flavors it has to offer.