This wild baby elephant refused to leave his injured friend’s side — no matter what.

Earlier this week, rangers patrolling the Maasai Mara National Reserve in Kenya spotted five elephants who’d been wounded by arrows. When the rangers gathered information from nearby communities, they learned what had happened — local farmers had shot the elephants after the herd ate some of their crops. 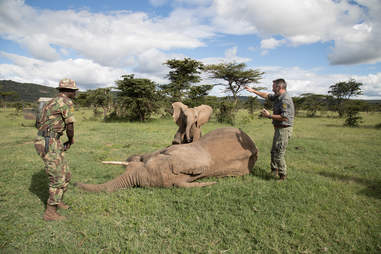 The rangers, who were from Olarro Conservancy, immediately got in touch with the Kenya Wildlife Service (KWS) and Mara Elephant Project (MEP), who, in turn, got in touch with the David Sheldrick Wildlife Trust (DSWT). Then everyone worked together to get a mobile veterinary team to fly out and treat the elephants.

Before the team could help the injured elephants, they had to dart the animals with sedatives — and this had to be done by helicopter. When the team darted the first bull, the bull veered away from the herd, along with an older elephant and a baby. 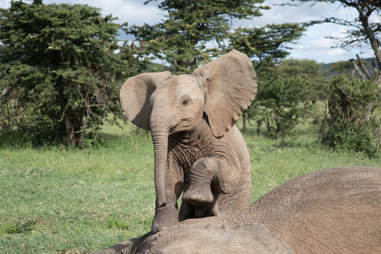 “It was assumed from the air to be a mother and her calf accompanying the young bull,” Angela Sheldrick, CEO of DSWT, told The Dodo. “It was later confirmed by the ground teams to be two young bulls with the little calf.”

This calf, who was about 18 months old, stayed close to the sedated elephant, who may have been the calf’s brother, although this couldn’t be confirmed. The calf’s mother wasn’t anywhere to be seen. 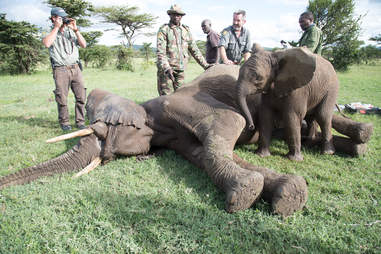 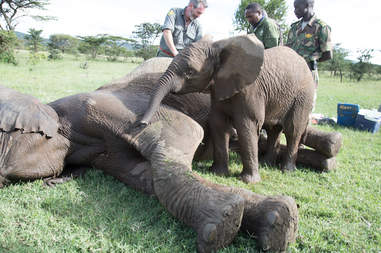 Being surrounded by humans was probably scary for the baby elephant, especially since it had been humans who injured his friend in the first place. But nothing deterred him from remaining by the bull’s side. 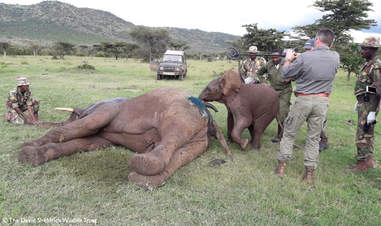 “The calf stayed close, sometimes climbing on the young bull, obviously concerned by his recumbent state, but was far too protective to run away or leave his side,” Sheldrick said. “He was remarkably unaggressive given that he was completely surrounded by humans during the operation, such was his love and loyalty of the recumbent patient.”

While no one will ever know what the baby elephant was thinking, Sheldrick suspects he knew the vet team was helping his friend. 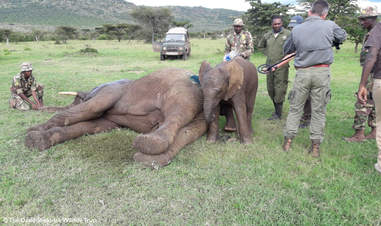 “This is not a tiny calf,” Sheldrick said. “At 18 months of age, he would still be very capable of knocking a grown man off his feet. He displayed no such aggression throughout proceedings, which is extraordinary behaviour for a wild elephant in a situation such as this. Normally one so young would run away, or charge around trumpeting, knocking into people.”

Yet the baby elephant remained calm and attentive throughout the ordeal, despite there being multiple people and vehicles driving in and out of the area, according to Sheldrick. 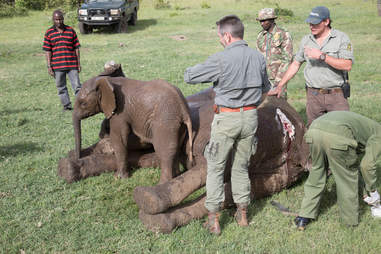 “He showed concern and protectiveness, but elephants are such intelligent animals, and, somewhere, we feel sure he knew help was on hand,” Sheldrick added. “[This was] made all the more remarkable given the recent human-wildlife conflict and the injuries inflicted on this herd at the hands of humans. One would expect aggression and fear; this baby elephant knew the difference between the two situations as there was no panic.” 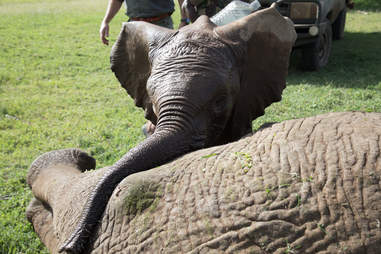 The vet team worked for two days to help the five injured elephants. Thankfully, none of their wounds were life-threatening, and the elephants were able to fully recover and rejoin their herd. 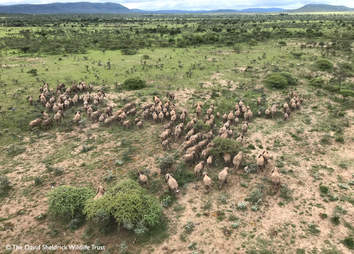 “[It was] a very unusual day for all concerned, and those on the ground made clear how touched they were by the protective behavior of the youngster,” Sheldrick said. “Of course, attending to incidents like this, where elephants have been injured through no fault of their own … is always emotive for the teams. However, knowing you can make a difference is uplifting.”

Help me mum, I’m stuck: Baby elephant struggling on muddy river bank is saved from drowning when its mother comes to the rescue

Baby Elephant Refuses To Leave Mom Who Was K.i.l.l.e.d For Tusks