Zeus sniffs the air at the wolfdog rescue sanctuary. He smells treats, but he sees humans. Among his pack mates, he’s the alpha male and he walks with authority. But when it comes to people, he’s wary.

Some people yearn to run with the wolves.

We are sitting quietly in the wolfdog enclosure, hoping Zeus will come closer.

This is the Yamnuska Wolfdog Sanctuary, a non-profit rescue center and home for these magnificent animals, just west of Calgary, in Alberta, Canada. 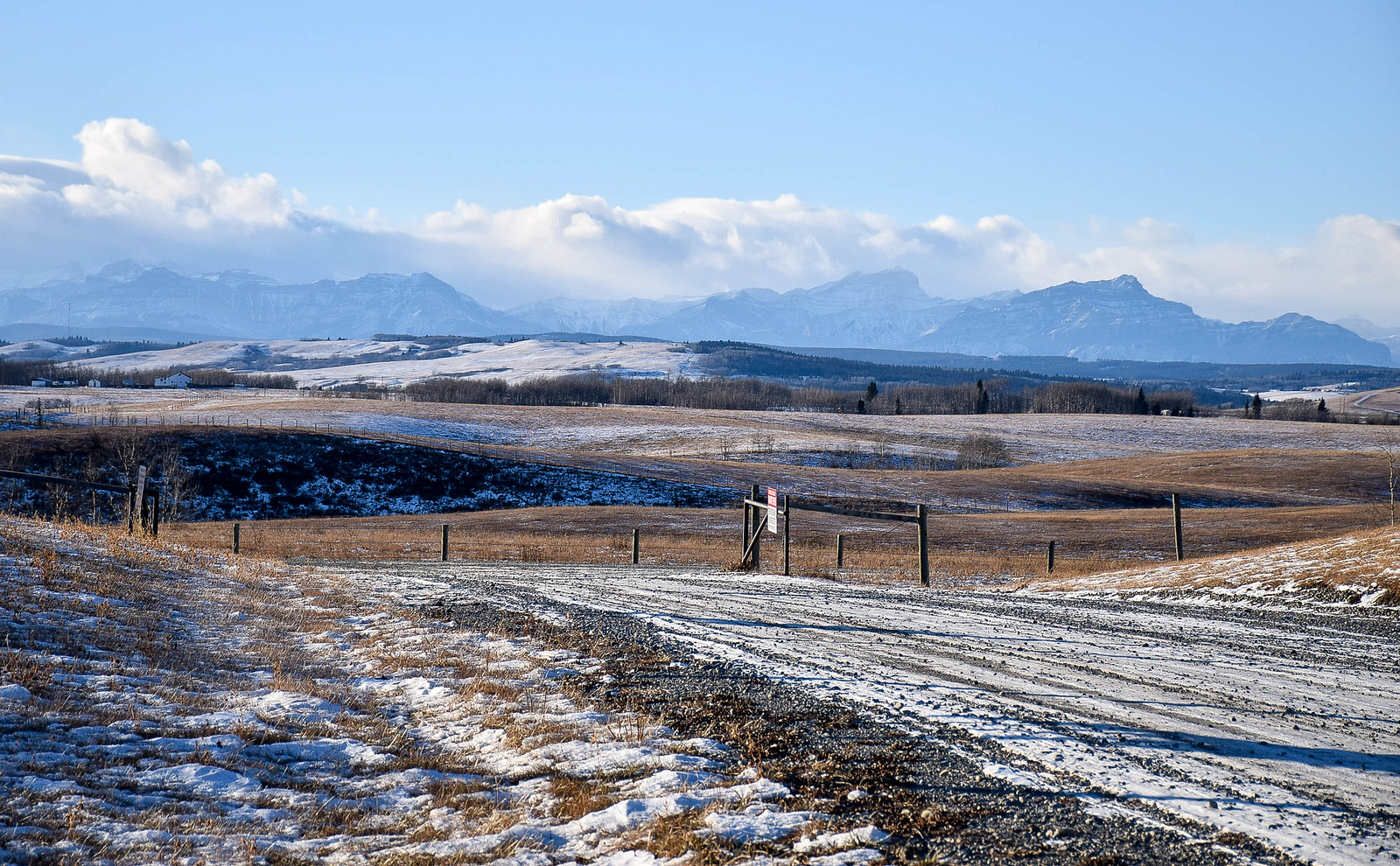 What is a wolfdog?

As you might expect, a wolfdog is a dog that has some amount of wolf in it. The greater the wolf content in the dog, the more “wolfy” the behavior you’re likely to see. Wolves are strong and intelligent, with a predatory instinct and a tendency to roam.

That can be a problem when people buy these dogs as pets and then find them too hard to handle.

The wolfdog rescue sanctuary looks after abandoned or mistreated wolfdogs, and it provides education about these animals by offering tours which can include an opportunity to get up close and personal with the wolfdogs. The tours also provide funding for wolfdog care. 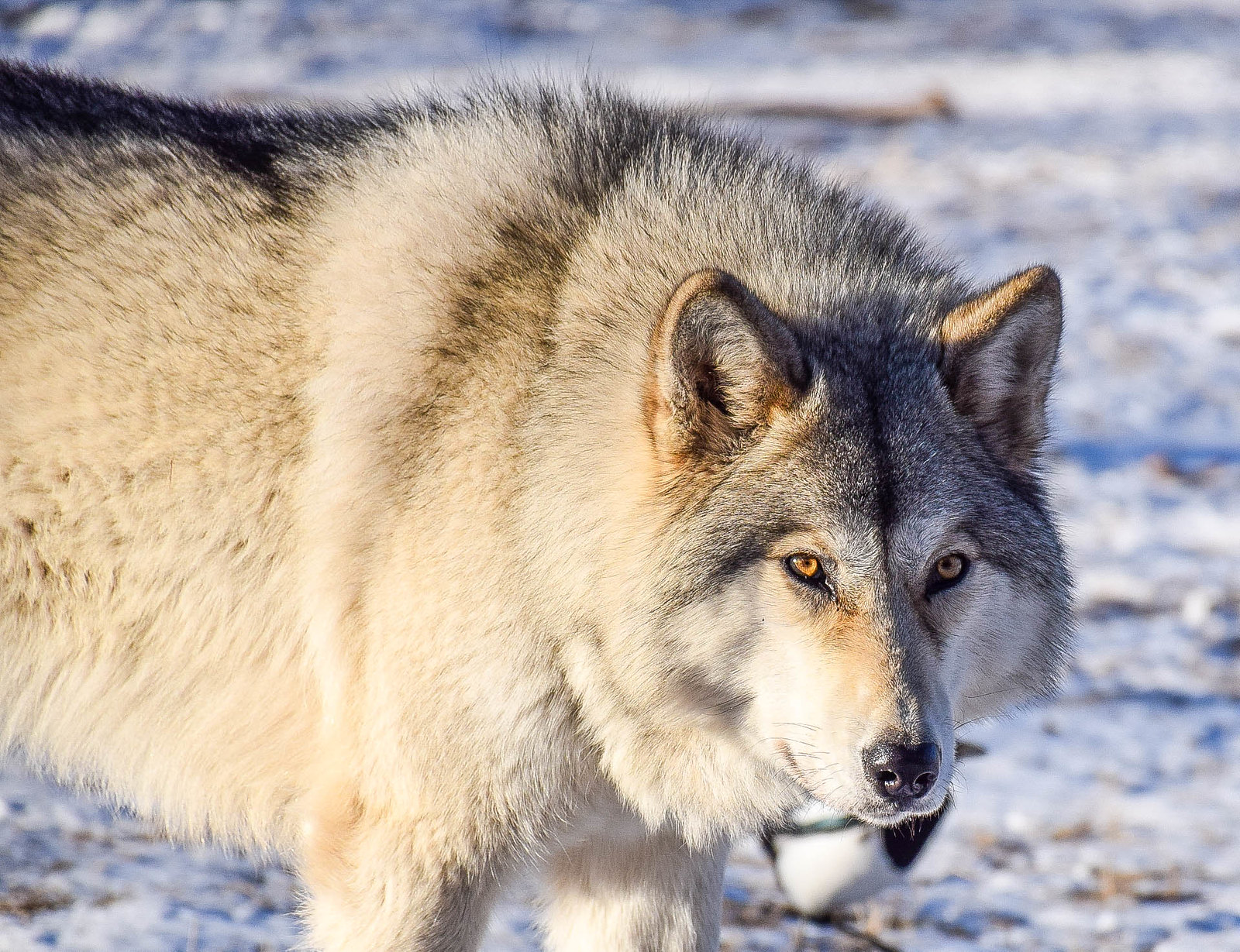 The Myth of the Big Bad Wolf 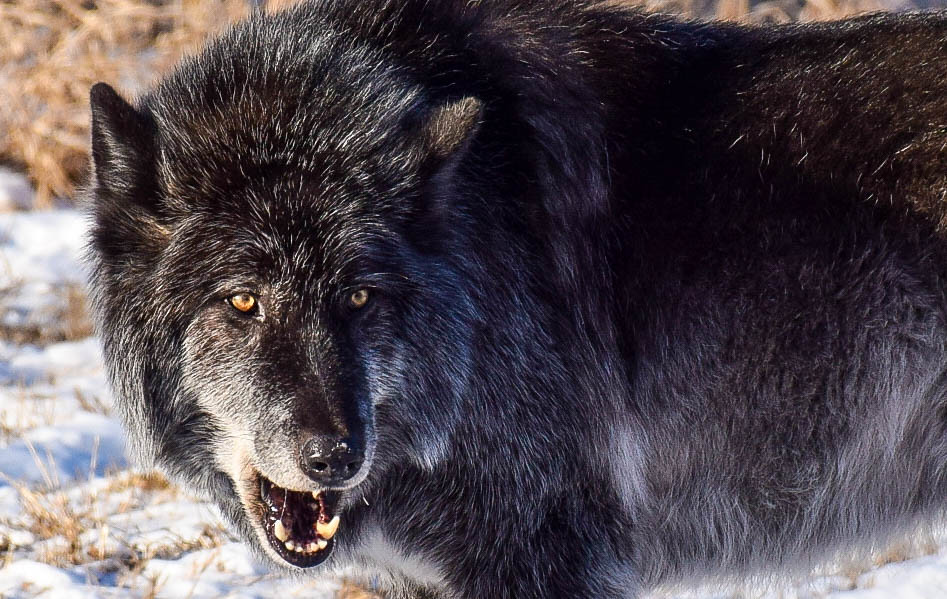 After signing a waiver, the tour starts inside the half-acre enclosure of the high content wolfdogs. It’s surrounded by an 8-foot high fence that curves inward at the top.

We are seated quietly and immediately see why. These wolfdogs are timid and wary of people – not exactly the big bad wolf-type we learned about in Little Red Riding Hood. Our guide, Scott, tries to lure them over with treats. They’re interested and approach cautiously, but they’re not prepared to get too close.

Scott explains that while the high content wolfdogs can get used to people they know, they’ll always be uneasy around strangers and skittish about sudden movements or noises. These wild instincts can’t be trained out of them. 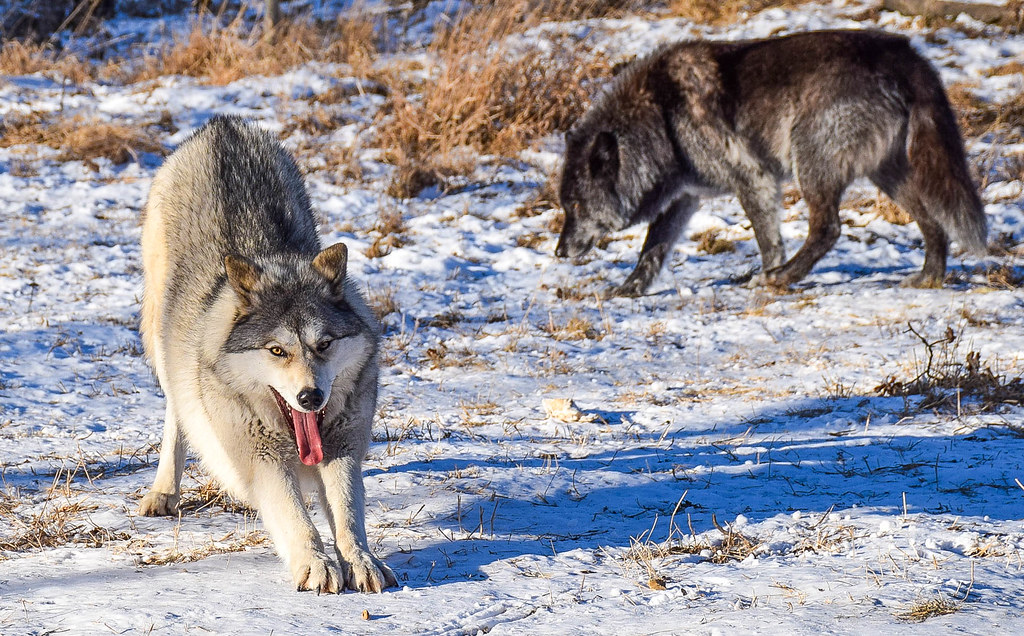 Rue and Zeus. Spunky Rue has less wolf content than Zeus and the folks at the Sanctuary like to say she speaks “wolf with a bit of an accent”. Her high content pack mates put up with her mischief because they figure she may not know any better.

Why start a wolfdog rescue sanctuary? 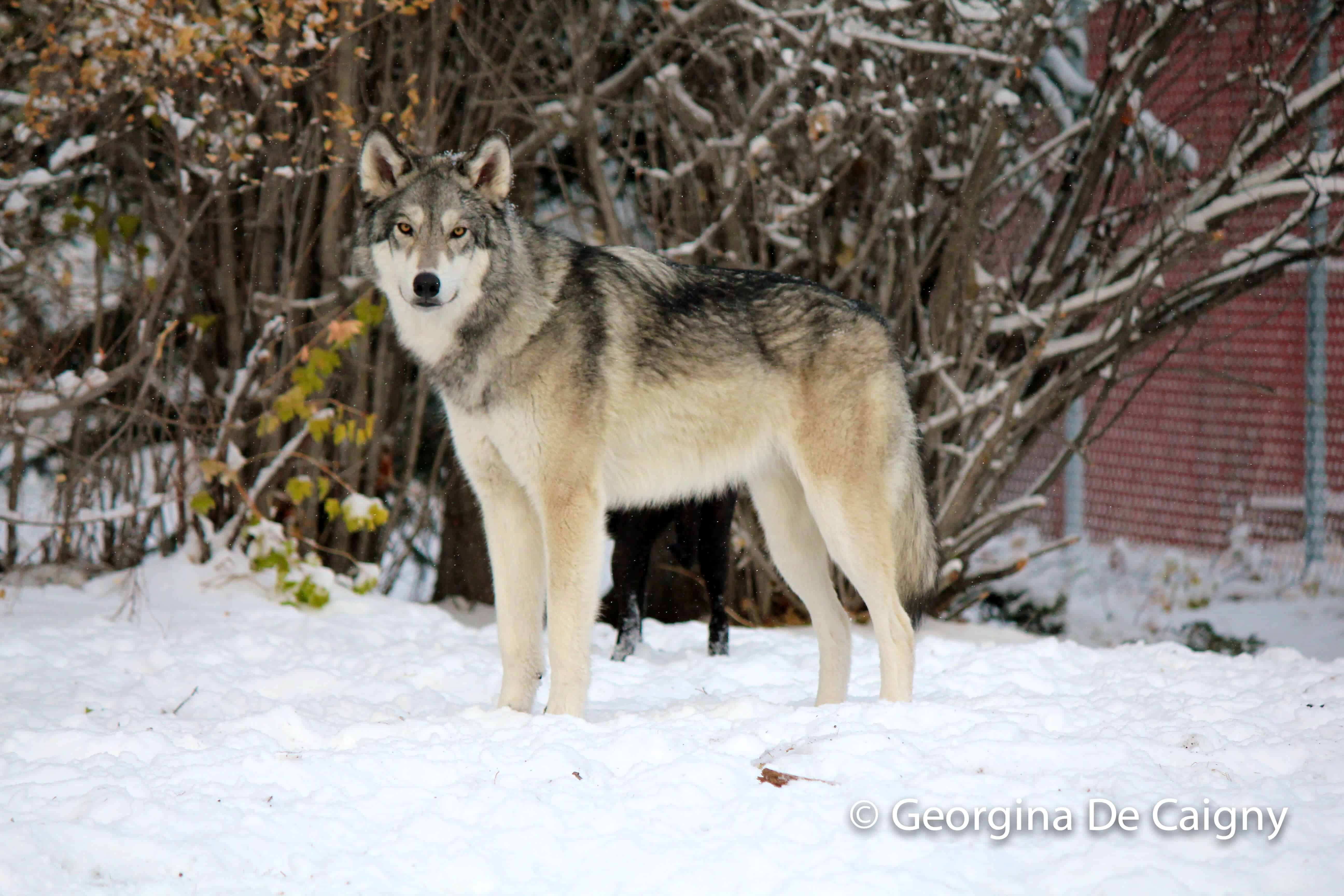 This is Kuna, another high content wolfdog and the alpha female of the pack. She rules the roost and she’s the inspiration for the sanctuary.

It’s Executive Director, Georgina De Caigny says her life changed when she adopted Kuna as a puppy after her owners gave the dog up. That’s when De Caigny discovered that wolfdogs aren’t like any other type of dog and that there aren’t many organizations that can look after this breed. These dogs are escape artists, requiring heavy chain link fencing with dig guards, aren’t easily house trained, and can’t be left alone because they may chew their way through your house. They can’t live in the city or visit the dog park.

De Cantigny says Kuna often sleeps on her bed at night, but will also jump onto the table and eat their food. She says it’s useless to try to tell a wolfdog not to act like that. They’re like cats, she says, they’ll do what they want. She describes them as “companion animals”, not pets. 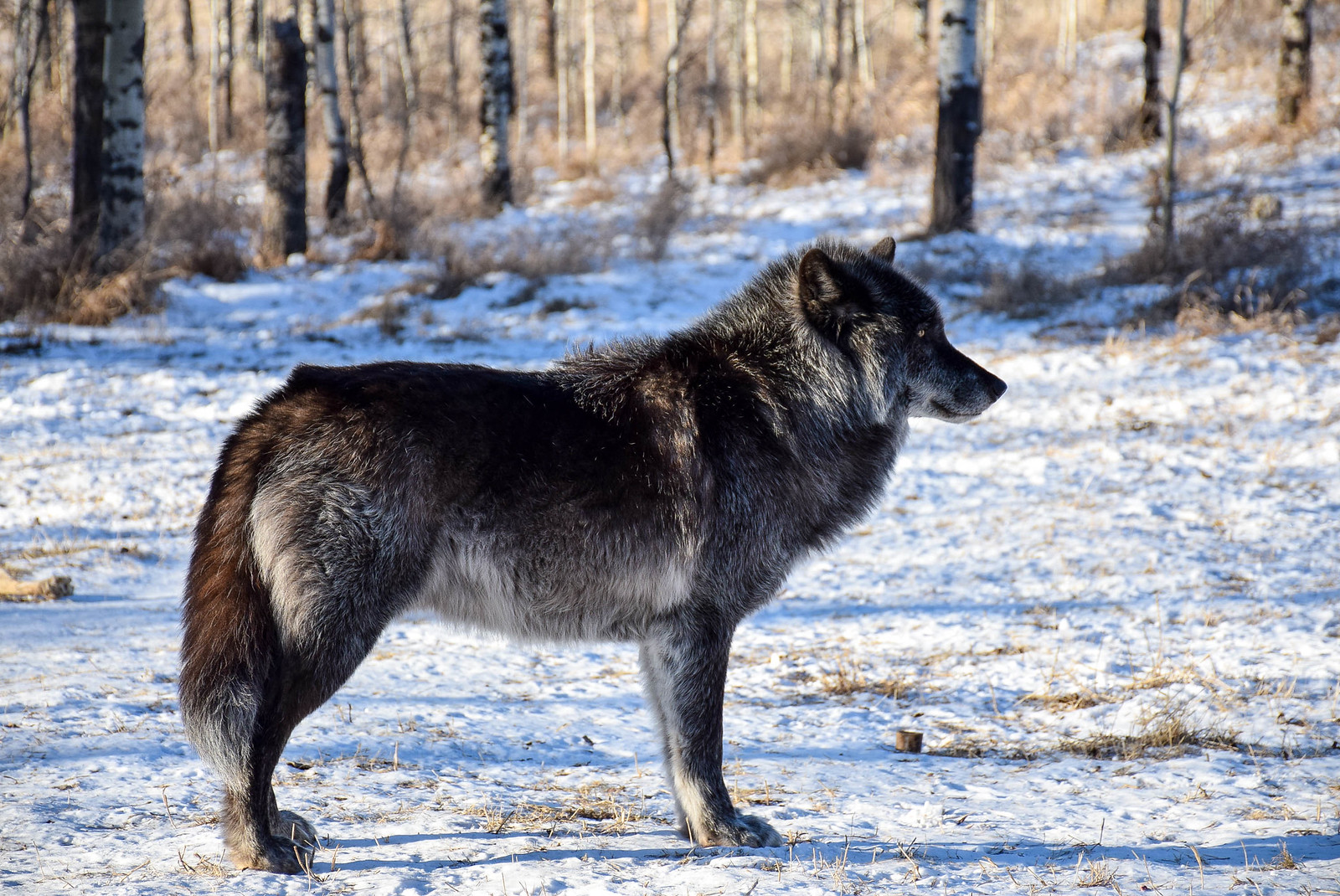 It’s rare for dogs and wolves to breed naturally in the wild. Wolves are pack animals and would be more likely to attack an outsider dog.

So how do we get wolfdogs? It’s because of breeders who claim they’re selling dogs that look like wolves but act like dogs. The dogs can sell for up to $5000.

People buy these so-called “glamour dogs” for the wrong reasons. They mistakenly believe that they’re house pets. At the same time, the wolfdogs are too “dog-like” to live in the wild. Without a wolf hybrid rescue sanctuary, the sad truth is that many ends up being euthanized. 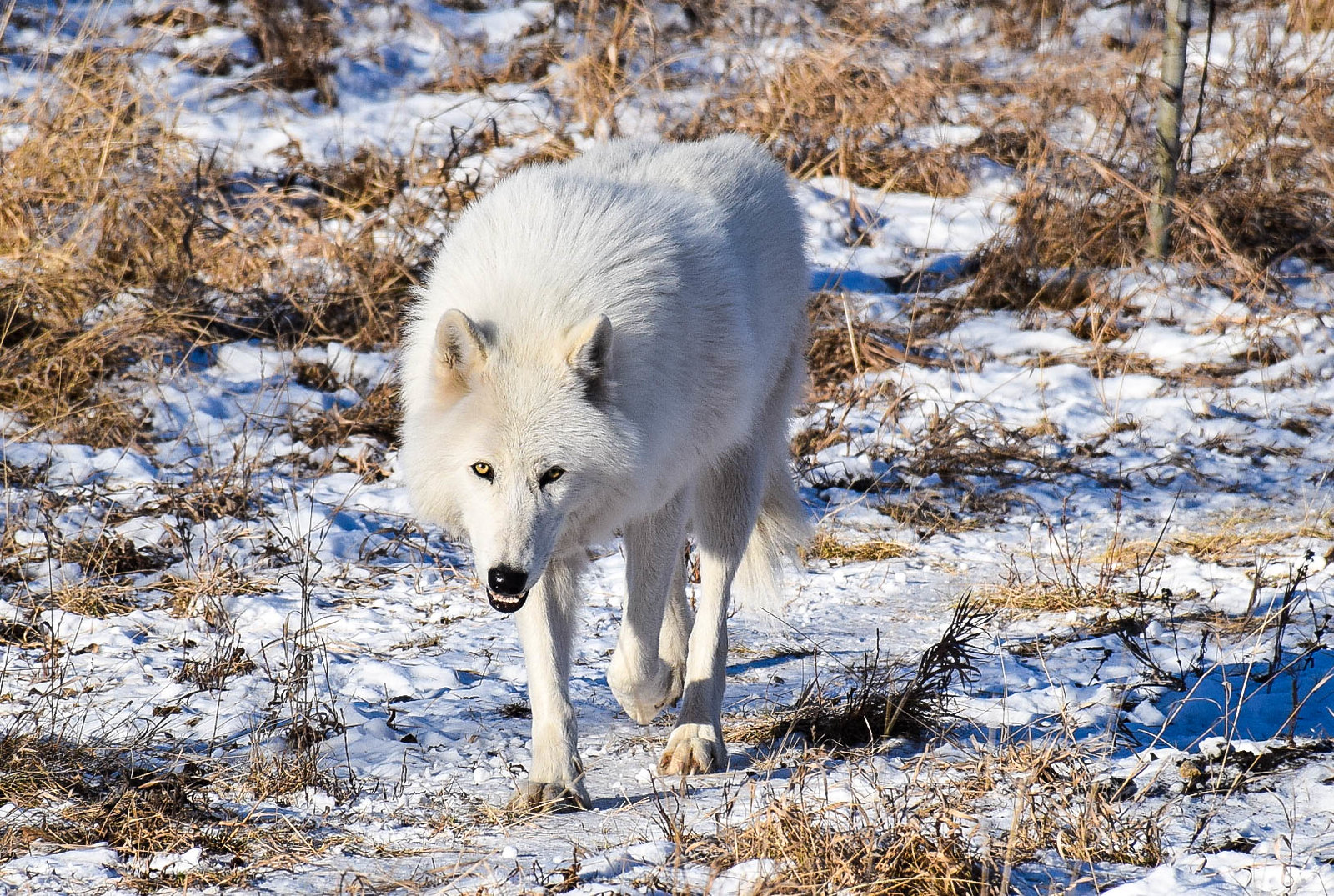 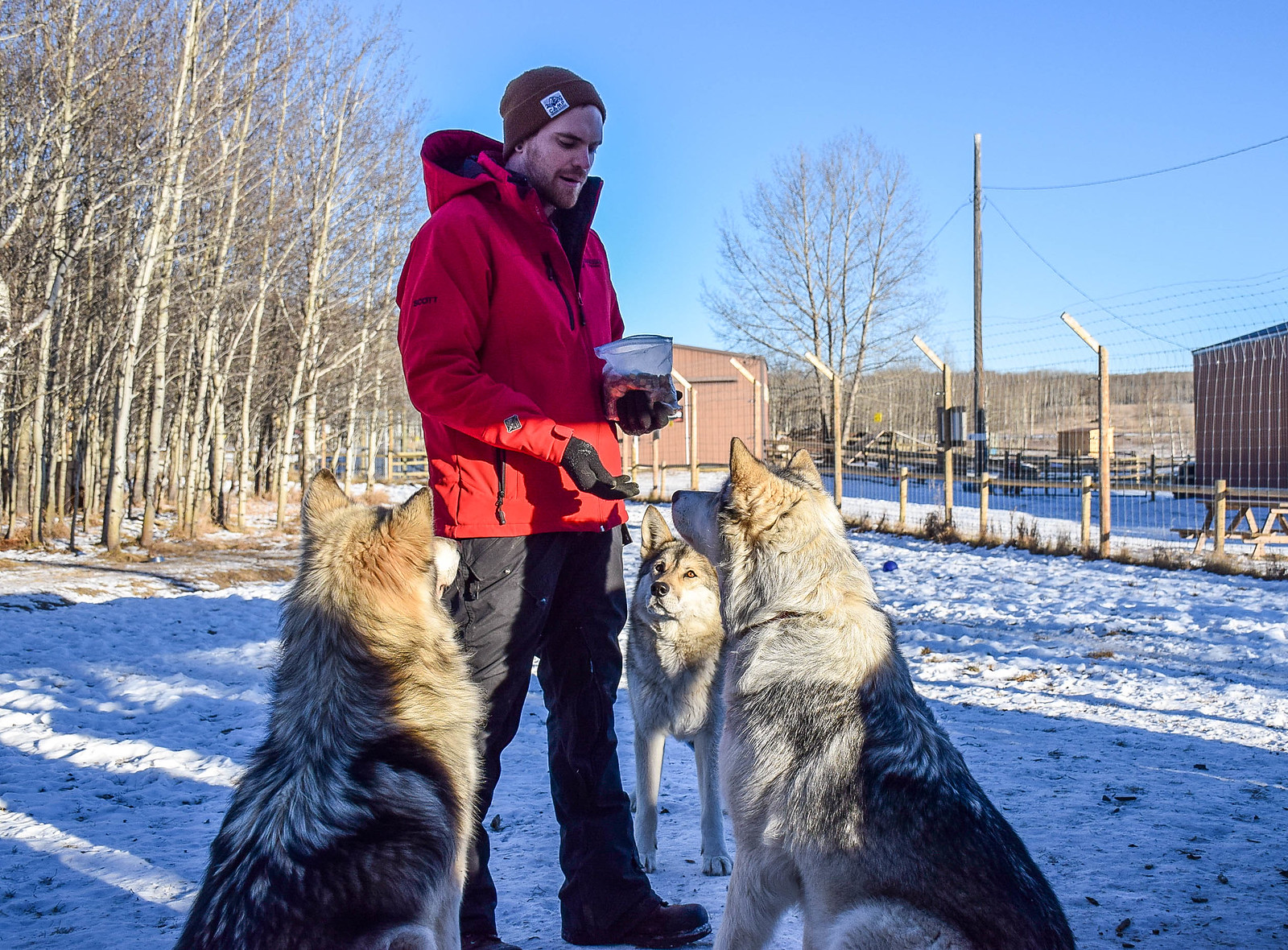 After teaching us about wolfdogs, Scott takes us to the low content wolfdog enclosure and arms us all with doggie treats. Although we’re still asked to remain seated during the visit, we can see the difference with these wolfdogs. They’re prepared to get social in pursuit of the treats. One of the dogs was a little lacking in manners at times, but I did get all of my fingers back. What a pleasure to get to know these beautiful animals! 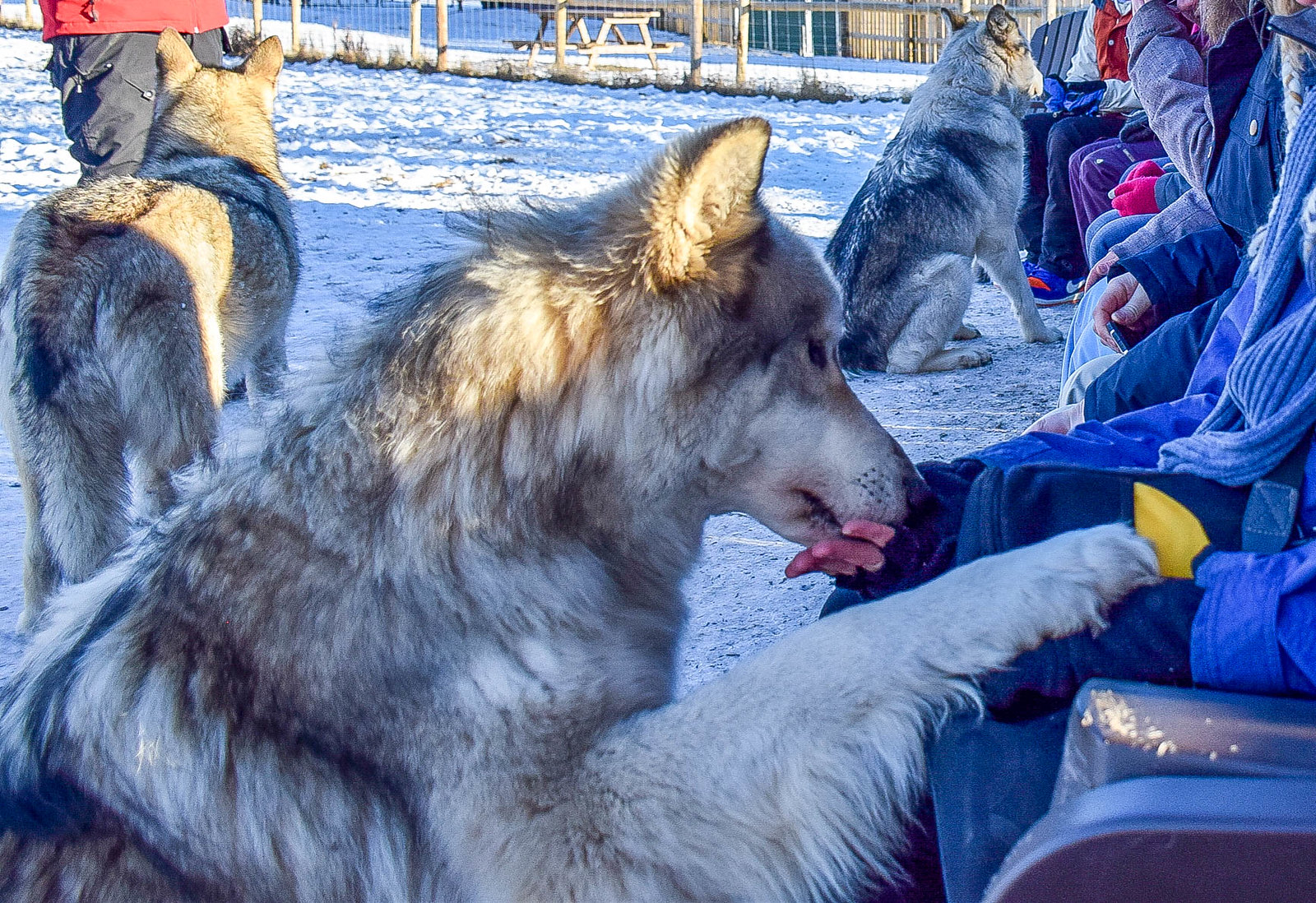 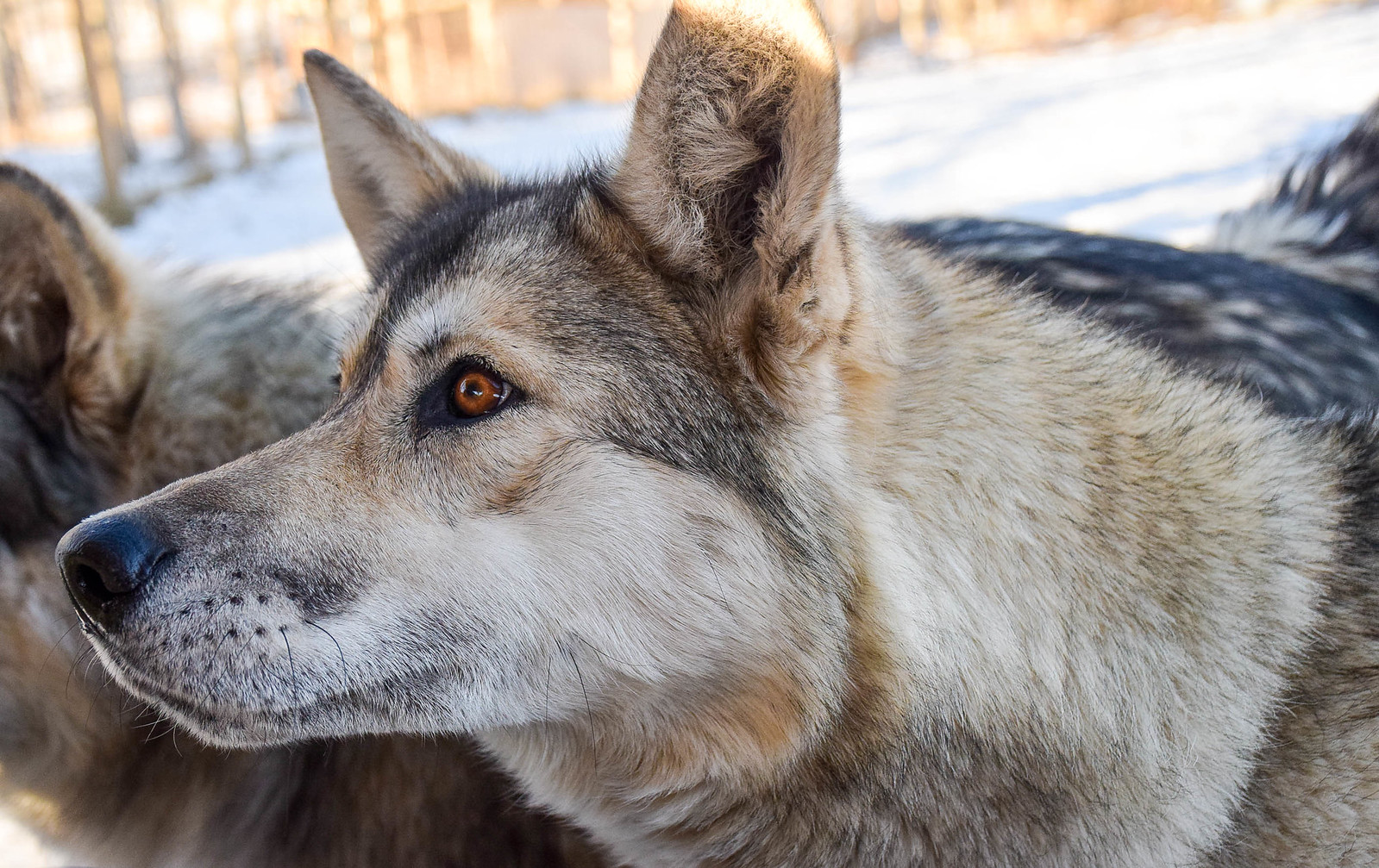 The Sanctuary will be the forever home for most of its high content wolfdogs. But the staff assess the low content wolfdogs to determine which ones are good candidates for adoption. Of course, applicants are also thoroughly assessed to ensure that they can meet the needs of these dogs to keep them happy and healthy. 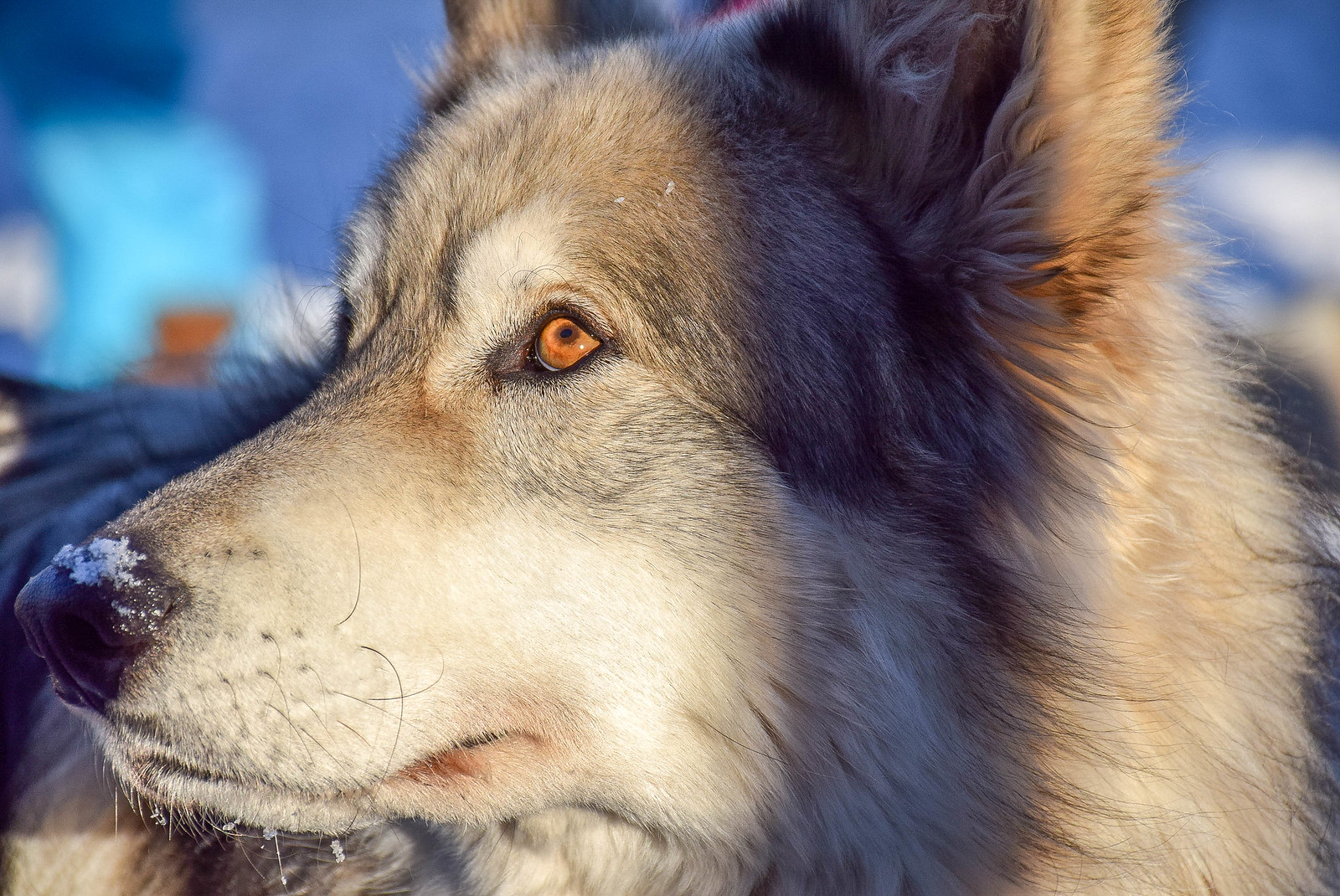 It was an extraordinary experience to see and to learn about these unique animals.

But I couldn’t help but feel that it had a bittersweet quality also. It was sweet because of the striking beauty and character of the wolfdogs, and because they have a home where they are so obviously well cared for.

The bitter part is that the breeding goes on, and those wolfdogs might not be so lucky. 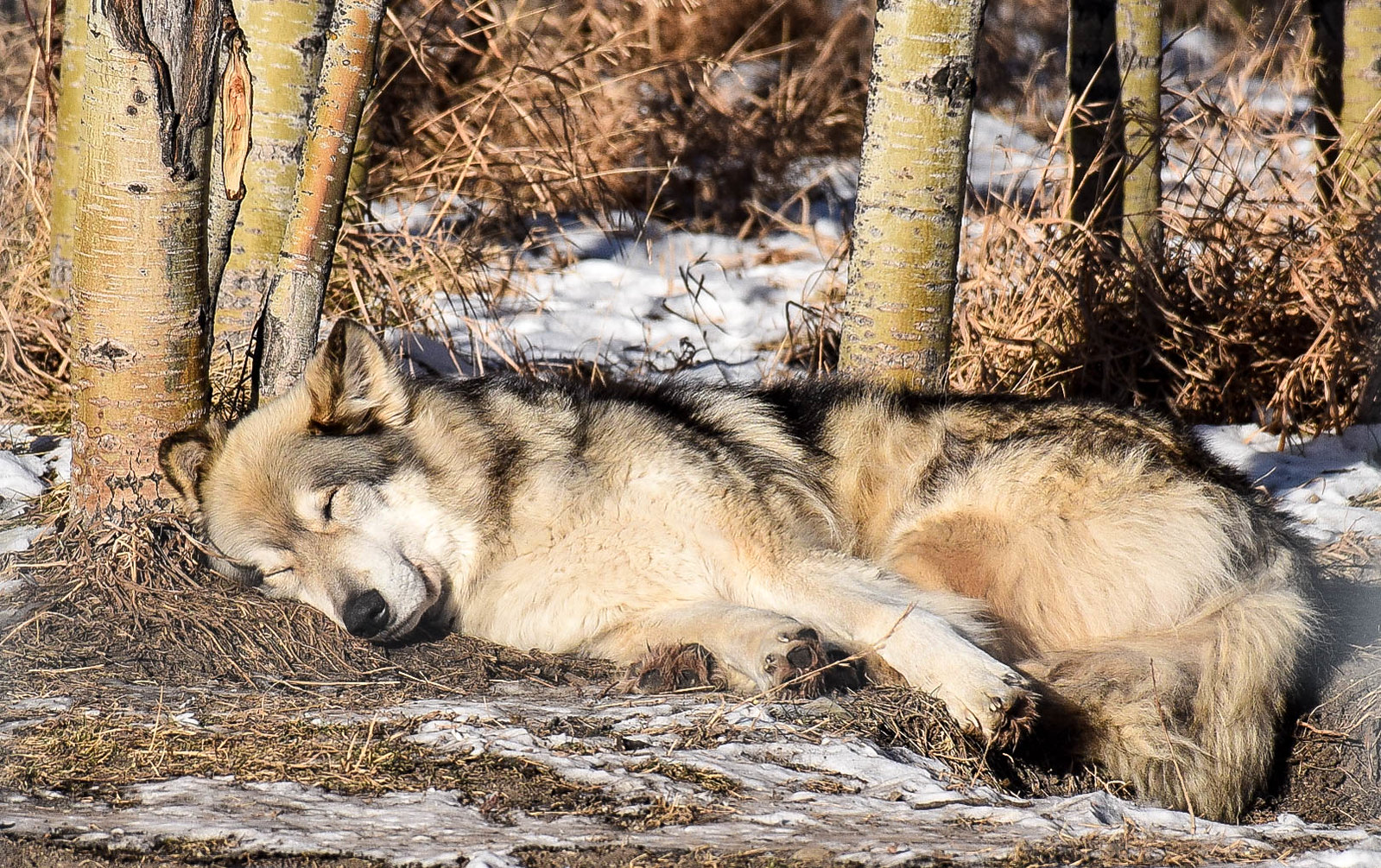 10 Most Amazing Destinations in Western Canada

Top 10 Things to do in Jasper National Park