Scattered throughout Germany are collections of what look like tiny houses surrounded by well-kept gardens. But people don’t live in these small structures with flourishing yards. These are allotment gardens — a take on community gardens also known as Kleingarten or Schrebergarten. Originally developed to facilitate health and wellness, these gardens are described by The Local as “a concept, a goal, a way of life.”

In the early 1800s during a strong period of urbanization when many people had moved to the cities for work, impoverished families often had difficulty finding enough to eat. Some churches, city administrators and factory owners offered to lease them community land for a small fee so that they could grow their own food. These became known as Armengarten, or gardens for the poor, according to DW.com.

As urbanization continued, Dr. Moritz Schreber, a doctor, and teacher from Leipzig was concerned that children raised in the city would suffer both physically and emotionally if they didn’t have more outdoor experiences. He proposed the concept of playgrounds where everyone could get physical exercise and enjoy the outdoors. Just a few years after he died, the idea gained traction and the concept of Schrebergarten was named for him, reports the Local. The early spaces were mostly played areas on the outskirts of town. But families quickly realized there was value in the land and also began planting gardens in their outdoor plots.

While the kids ran around and soaked in all that fresh air, the adults grew vegetables for the family. But there was downtime for them, too. They pulled up their chairs and talked or played cards. The gardens evolved into a hub for relaxation and social life for everyone in the family. The gardens also became known as Kleingarten (“small garden”) or Familiengarten (“family garden”).

Most of the plots were converted completely to family gardens by World War I, and those plots helped a hungry populace survive both world wars, reports German Girl in America.

As the popularity of the gardens grew, laws were passed to keep leasing fees reasonable. The plots of land were kept in the family, passed down from generation to generation as long as the fees were paid.

Many of the gardens were located in relatively undesirable areas where most people didn’t want to live, like along railroad tracks, airports and even on both sides of the Berlin Wall. They were usually grouped together in colonies, forming communities.

A way of life Though they are no longer a necessity, Kleingarten is now considered a luxury or, some say, a key pillar to a recreational way of life.

These days, there are about 1 million allotment gardens in Germany and 95% of them are occupied, according to a study by the German Institute for Construction, City and Space Research.

The average age of a garden association member is 56, a drop in about five years since 2011.

“The allotment garden system continues to have a permanent place in the green and open space system of cities and fulfills important social, ecological and urban planning functions,” the study authors write. “The allotment garden is rejuvenating: the generation change is becoming more noticeable … The main reason for this is the increased demand from young households, mostly families with children, who are also becoming more international. In the big cities, club members are more often younger than in the smaller cities.”

And these younger people appreciate the opportunity to be outdoors.

“Overall, this also reflects an increasing need to become more involved in nature and environmental protection and to use, secure and make green and open spaces, especially in the metropolitan areas, as places of rest and relaxation,” the researchers write. 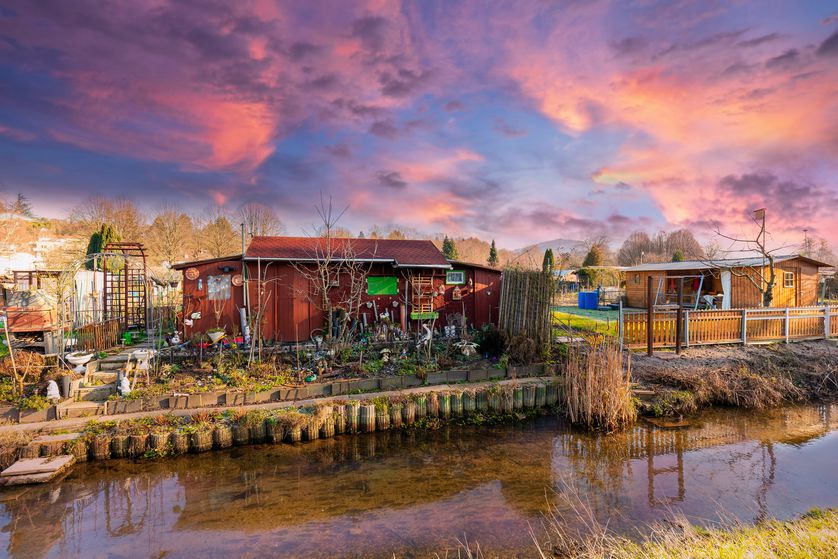 Gardens now are often so much more than just a few veggie plants. They can be elaborate spaces with loads of flowers, water features, barbecue grills and even the occasional garden gnome. They are spots for people to relax and socialize and enjoy the outdoors.

But it’s not easy to just grab a plot and start growing. There’s often a waiting list. According to the BBC, Berlin’s gardens have a waiting list of 12,000 people, and it typically takes at least three years to get a plot.

And as attractive as the gardens might be now, with their colorful flowers and home-like accouterments, there are national laws to control what goes on in the plots. The garden huts can’t be too big or used as residences, according to DW.com, and at least one-third of the garden must be used to grow fruits and vegetables.

But for many, the balance of rules versus relaxation is worth it, as generations mingle in the gardens.

“The amount of work that goes into taking care of the garden also makes you appreciate what you’re eating — and makes you realize what’s in season,” Paul Muscat, 32, of Wedding, Germany, tells the BBC. “Except for the parks, there’s no immediate escape from the urban environment. This offers a reprieve from that.”

Top 5 Things to See and Do in Cologne (Köln)