Animal keepers worked around the clock to hand-rear a baby rhino that couldn’t walk back to health.

Belle the white rhino was born at Cotswold Wildlife Park and Gardens in October 2017 to parents Nancy and Monty, but her front right foot wouldn’t extend.

Staff separated the calf from its mum to look after the leg but then the keepers had to take over feeding the 70kg baby. 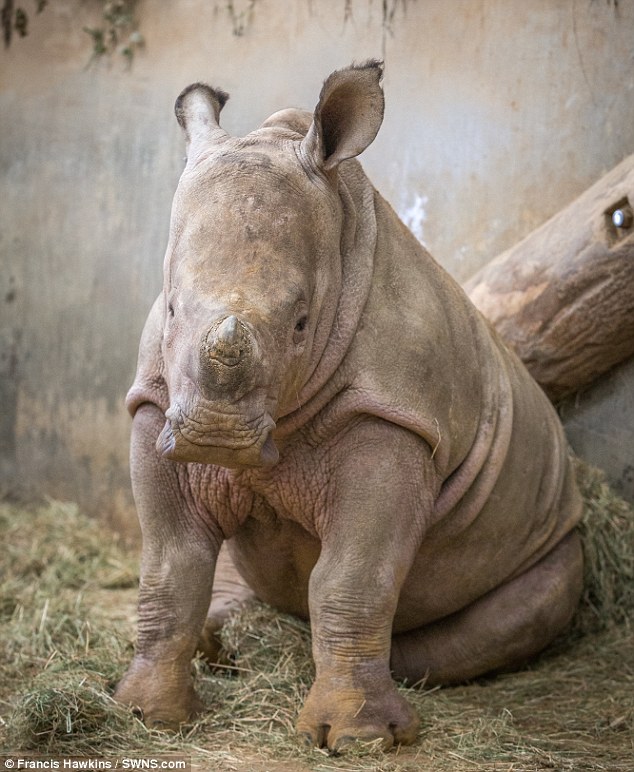 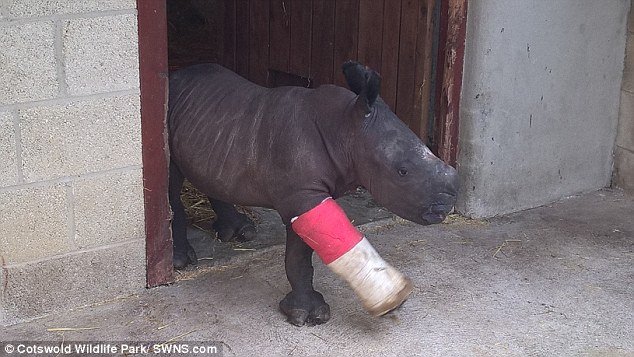 When she was born, her right foot twisted over and it was decided to her leg in plaster to give the joint and tendons the chance to heal 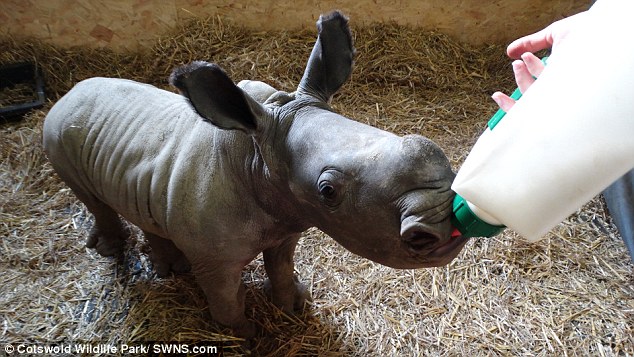 Belle was fed 40 liters of milk or roughly 70 pints, in a bid to restore her back to health 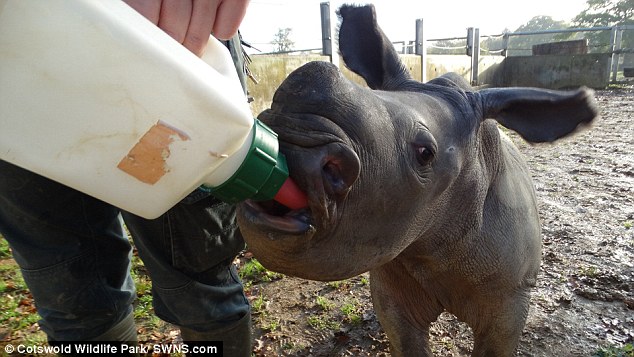 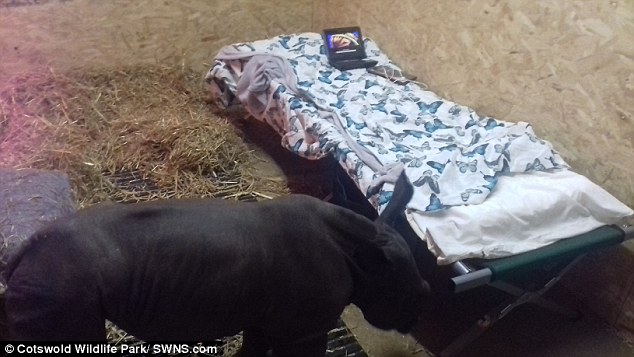 They drew up a rota and roped in co-workers, monitoring Belle and caring for her 24 hours a day, seven days a week, for three weeks 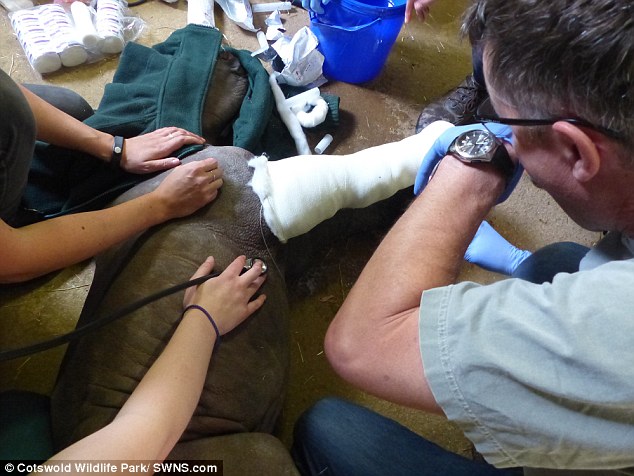 Belle’s leg being put into plaster shortly after birth. She injured herself when her right foreleg twisted 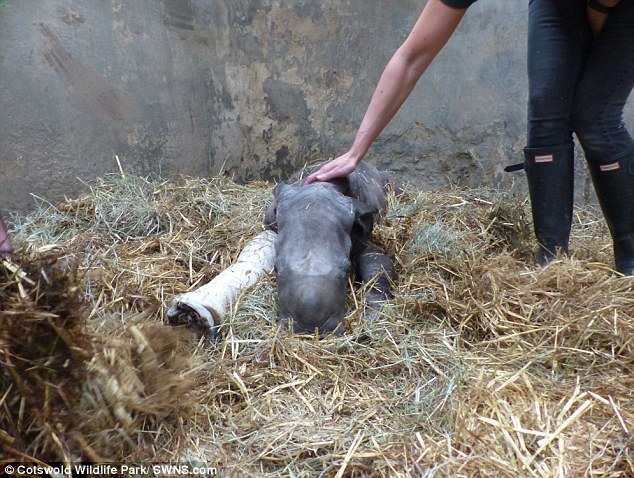 Belle needed 40 liters of milk, roughly 70 pints, every day, and workers drew up a rota to feed her the mammoth amount in two-hour intervals.

Belle is the fifth white rhino to be born at the wildlife center, but unlike the other four, her arrival didn’t go smoothly.

Although Belle was standing fine, when she went to walk her right foreleg twisted, leaving her standing on her carpus joint, similar to a wrist.

She righted herself and staff thought the worst had passed, but come morning Belle couldn’t straighten out the joint and curator Jamie Craig knew they had trouble.

Jamie, 46, said: ‘When we arrived at the Rhino House the following morning, it was immediately apparent that there was a major issue.

‘Although lively and attempting to suckle from Nancy, the front right foot was twisted over.

‘After observing for some time, it became clear that she was now walking on the joint and that it would not correct itself.’

Experts were called and the difficult decision to separate Belle from her mother was made so that the staff could attempt to save the calf’s mobility.

They decided to put Belle’s leg in plaster to give the joint, and tendons within, the chance to heal.

Jamie continued: ‘The decision was made to cast the leg to allow the nerve to recover.

‘After some time, and much effort, the calf finally stood but was struggling to walk with the cast and clearly in a state of distress. 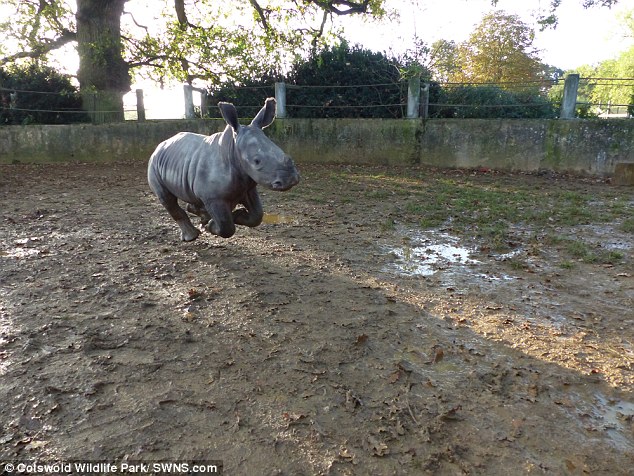 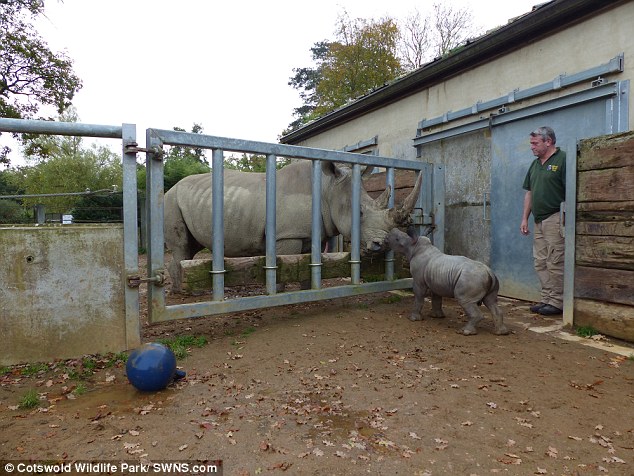 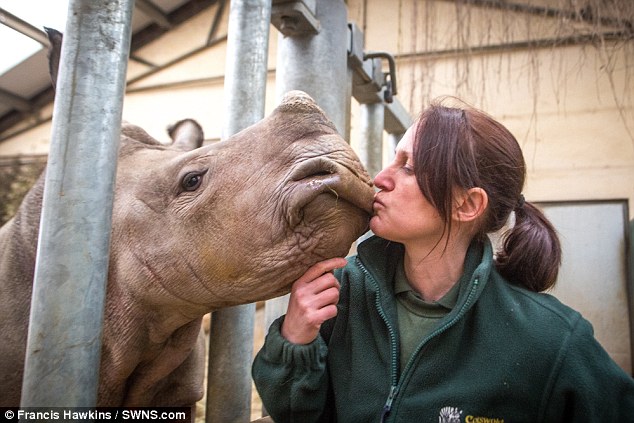 Keeper Hayley Mullaney, head of large mammals at the wildlife center, and Belle sharing a special moment together

‘At this point, it was clear that the calf could not be reintroduced as it had not mastered walking with the cast and its erratic behavior would have agitated the mother.’

Jamie and another keeper named Hayley Mullaney, 39, realized that Belle would need round-the-clock care, as she still needed feeding every two hours.

They drew up a rota and roped in co-workers, and between them, they monitored Belle and cared for her 24 hours a day, seven days a week, for the next three weeks.

Jamie said: ‘It’s hand-rearing on a mammoth scale. I’ve hand-reared a lot of animals but I’ve never seen an animal drink so much milk.

‘I think the local dairies are doing well thanks to the amount we’ve been going through. The empties have been piling up.’

Hayley, head of large mammals at the wildlife center, said: ‘The first 24 hours panicked her but when she got her strength back she was fine.

‘It was difficult, we did shifts so we could get some sleep or we’d go home to get a shower – we took it in turns.

‘At the beginning, there were five of us but now it takes three because she is doing well.

‘We just sat with her, spoke to her if she was awake and anxious or stressed. She was being fed every two hours initially.

‘After a couple of weeks it took its toll and we were all a bit tired and bleary-eyed.

‘But it’s why you do the job so it was all worthwhile, it was the best thing I’ve done in my career so far.’

Now five-months-old, Belle has gained over 220kg and is officially too big for the keepers to go into her enclosure.

Her leg has healed well, and staff is now trying to reintroduce the calf to her mother.

Jamie continued: ‘It was vital we got her back into the Rhino House so she could integrate again with her mum and the herd. 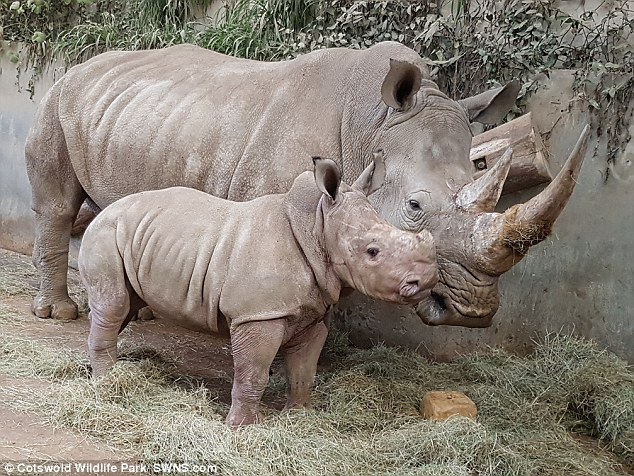 Belle alongside mum Nancy. Belle is the fifth white rhino to be born at the wildlife center 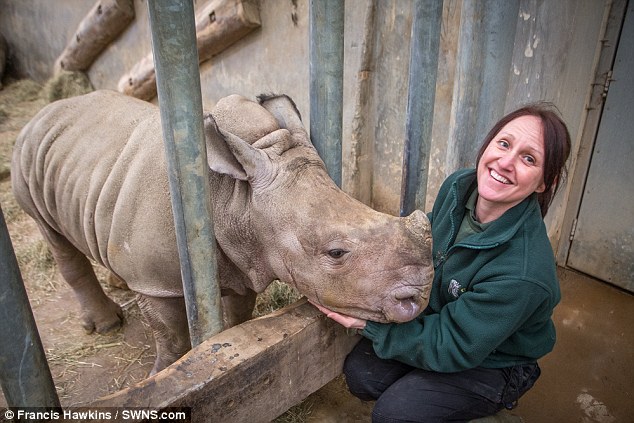 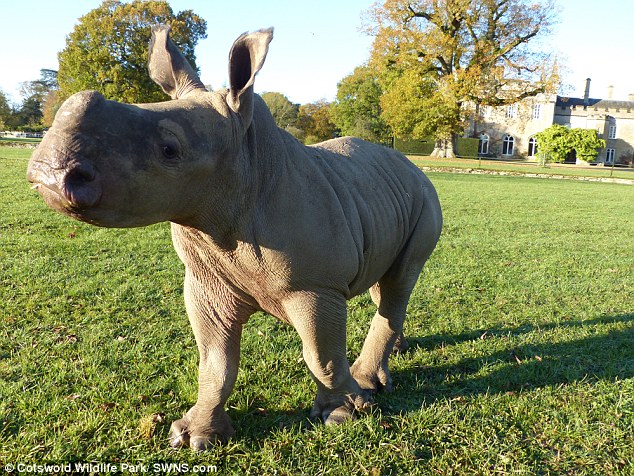 ‘She was moved to a pen next to the main house so she could first experience all the smells and sounds of the adults and was then introduced to other herd members with a barrier safely between them to avoid accidents.

‘She appeared to get on very well with our other adult female, Ruby, and her new male calf Alan,

‘Reassuringly, we have not seen any issues with the injured leg since.

‘At the moment, she spends most of her day with her mother and we hope soon she will be with her 24 hours a day.

‘There is still a long period of bottle feeding ahead of us but Nancy allows Belle to come to her keepers for her feeds and appears to be tolerating her belated new edition well.

‘It is unclear if Nancy realizes this is her calf, but Rhinos can be amazingly gentle with calves and we hope whatever the situation, the pair form a strong bond.

‘Over the next week and months, we will gradually introduce her to the rest of the herd until she is a fully-fledged member of the crash.’

Although Belle will soon be living with the other adult rhinos, she still has a strong bond with her keepers.

Hayley added: ‘If you spend that much time with an animal you do build a good relationship with them.

‘Her bond with us is stronger than with her mum, unfortunately.’

Mother Leopard Helps Her Cubs Cross The Road, The Video Is Fascinating