To make traditional Dutch stroopwafels, bakers put a layer of gooey caramel syrup between two round wafer-thin waffles, creating a chewy cookie-like dessert that tastes incredible alongside a fresh cup of coffee.

Stroopwafels originated in Gouda between the 18th and 19th centuries. Legend has it bakers would, to avoid wastage, mix up leftover cookie crumbs into a dough. From this, they made waffles, glueing pairs together with sugar syrup – deliberately used as a sweetener. Ultimately, they became a national staple as bakers across the Netherlands jumped on the bandwagon. Fresh stroopwafels are warm and gooey. Packaged, they can turn a little brittle, which is why you’ll see them placed on cups of coffee or tea, with the heat and steam softening them gently. These delicious Dutch treats are available at bakeries, cafes and stores throughout the country. Here are the best places to eat stroopwafels in Amsterdam.

his long-running bakery in central Amsterdam makes superb king-size stroopwafels so big that you can barely hold them with one hand. They’re tasty, crispy and come in two flavours: honey or coffee caramel. The business, run by the same family for four generations, also makes other sensational desserts – several flavours of home-made ice cream, for instance – and bakes batch after batch of familiar pastries daily. Whatever you order, enjoy it in the charming tearoom overlooking the Singel canal.

The founder of this charming stroopwafel stand honed his skills in the city of Gouda, south of Amsterdam, having gleaned a secret recipe from one of the city’s leading bakers. He still uses this mystery formula to create authentic Gouda-style waffles, working with his family out of an old-school food truck in Amsterdam’s famed Albert Cuypmarkt. Rudi’s Original Stroopwafels, where time-honoured methods are strictly observed, serves these gooey, delicious treats straight from the grill. They also come in stacks of 10 or packaged up in decorative cookie tins.

Unlike more traditional stroopwafel vendors, van Wonderen Stroopwafels experiments with its recipes and mixes things up while serving extra chunky toppings. You can choose between several options or create one with additional layers of chocolate, marshmallow and candy. There’s every excuse to stop by regularly – the store is about 100m (328ft) from the floating flower market on Kalverstraat, one of Amsterdam’s most popular shopping streets. 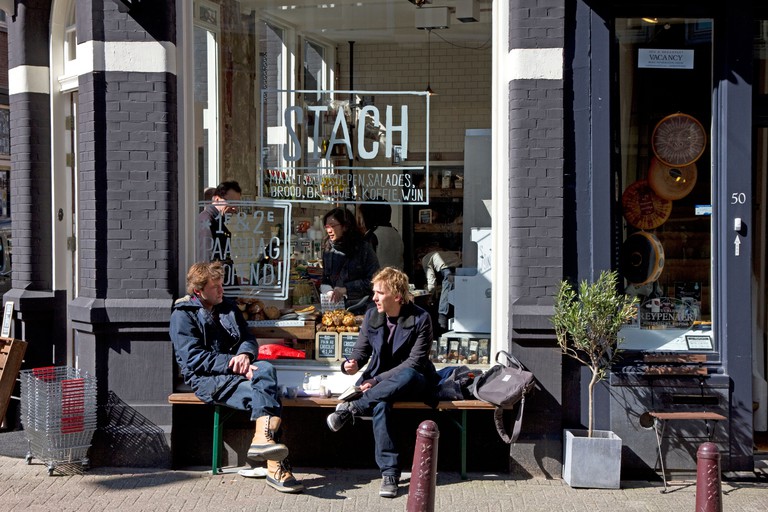 Stach has more than 10 locations in Amsterdam, selling everything from freshly baked bread to trendy imported soft drinks, such as Club-Mate. This small, deli-style grocery store stocks an impressive selection of well-crafted desserts and presents its stroopwafels alongside cookies of a similar size. You can buy its stroopwafels in stacks of 10; they go perfectly with fresh coffee. Stach also offers other delicious baked goods and lunches.’

Here’s a welcoming bakery on the ground floor of an eye-catching art nouveau Amsterdam townhouse on the northern side of Spuistraat. Not only does it bake some of the finest croissants in the city, but it also makes delicious traditional Dutch treats, fresh stroopwafels included, which are sold in handily wrapped small stacks. As it opens early, Croissanterie Hans Egstorf is a beacon for early risers in need of a freshly baked boost to kick start their day.

Recessed into the mossy stone walls of the hulking medieval De Nieuwe Kerk, Melly’s is every bit as cute and cottage-like as the smell of its freshly toasted stroopwafels would have you hope. The waffles themselves are made on-site, and the wafting aromas of cinnamon and caramel will make your mouth water as you agonise over which toppings to choose. With mini Smarties, gold-dusted chocolate pieces, crunchy chunks of meringue and toasted nuts, this part shouldn’t be rushed.

Here, you’ll find regular-size waffles, warm, caramel-oozing discs as big as your head, packaged waffles in cute decorative tins (perfect for a present) and paper cones overflowing with chewy waffle pieces. You’ll have to travel a little beyond the city centre to reach it – this popular market stall is at Albert Cuypmarkt, a three-minute walk from the Stadhouderskade tram station.

10 Reasons to Visit Gouda Other Than the Cheese