Zurich is one of Switzerland’s best known cities and is a major centre for business. Whilst you could easily spend a whole week here exploring the centre and the surrounding area, we’re sharing tips for what to see when you only have one day in Zurich.

One Day in Zurich

Zurich boasts a medieval Old Town that spans both sides of the river Limmat as well as the hip Zurich West district.

With just 1 day in Zurich, the Altstadt, as the old town is known, should be your first port of call. Start in the Lindenhof quarter in District 1, where you’ll find Münsterhof.

It’s the largest square in the old town and has a contemporary fountain as well as some very attractive medieval buildings housing boutiques and restaurants.

When we visited, there was a spectacular temporary artwork suspended over the square,”Black and White Circles in the Sky”, by Swiss artist Claudia Comte. As this square is pedestrianized, you can always get good photos here. 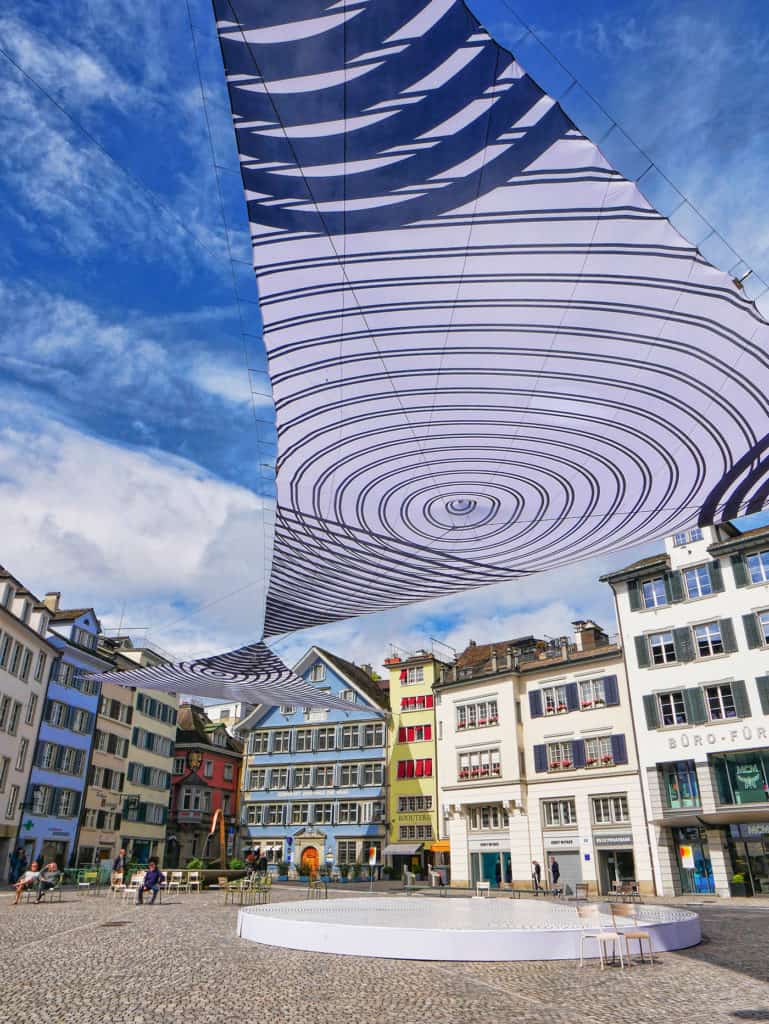 On the side of the square you’ll find Fraumünster Church, famous for its stained glass windows created by Chagall and Giacometti. The entrance to the church is round the corner on Stadthausquai.

You can’t take photos of the interior, but it’s definitely worth a look at these colourful masterpieces. Construction of Münsterbrücke, the bridge that connects Münsterhof to Limmatquai, began in 1835.

This cobbled bridge is still in constant use today and there are great views over the river from here. 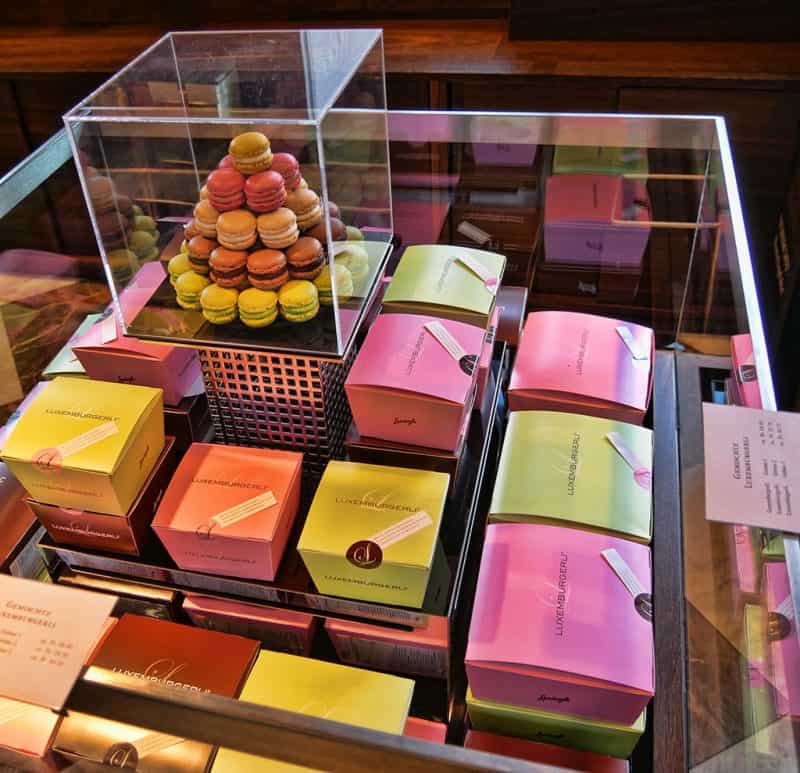 A few minutes walk from here on Schlüsselgasse, you’ll discover Max Chocolatier, one of the best chocolate shops in Zurich. Their hand-made chocolates use natural ingredients and the flavours vary depending on the seasons.

The cobbled street on which its located reminds us of Montparnasse in Paris.

Head up past St Peter church and you’ll come to Lindenhof, one of the most famous Zurich attractions. This historical hilltop square was a Celtic and Gallo-Roman settlement and is listed as a Swiss heritage site of national significance.

The Hedwig fountain dates from 1688 and commemorates the actions of the women of Zurich who defended their town in 1292. From Lindenhof there’s a panoramic view over Zurich.

A few minutes from Lindenhof, there’s a great place to eat on Rennweg, Boucherie AuGust. They specialize in meat dishes but have a good selection for non-meat eaters too.

Head back down via Schlüsselgasse and you’ll come to a narrow stairway, Thermengasse. It takes its name from the Roman baths discovered in 1983, the remains of which can be seen through a metal grating under your feet. 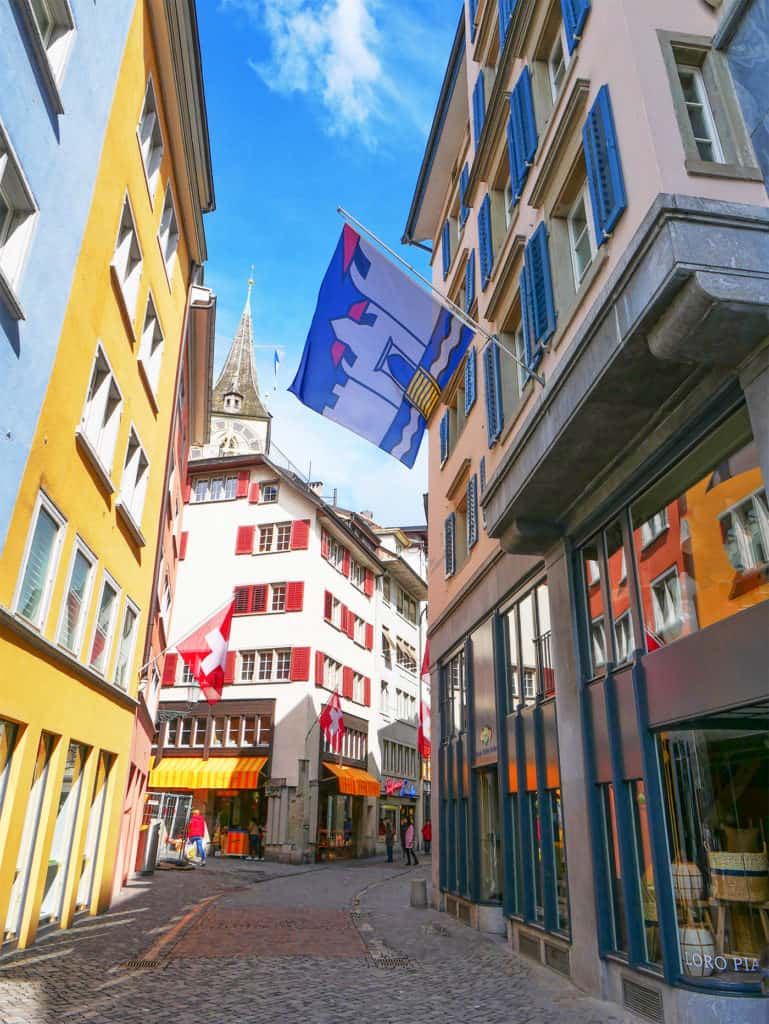 The five star Hotel Storchen is at the end of the street. It’s a lovely place to stay, with great views over the river and 66 stylish rooms and suites as well as a newly redecorated bar where you can get a coffee with a photo of your face on it! 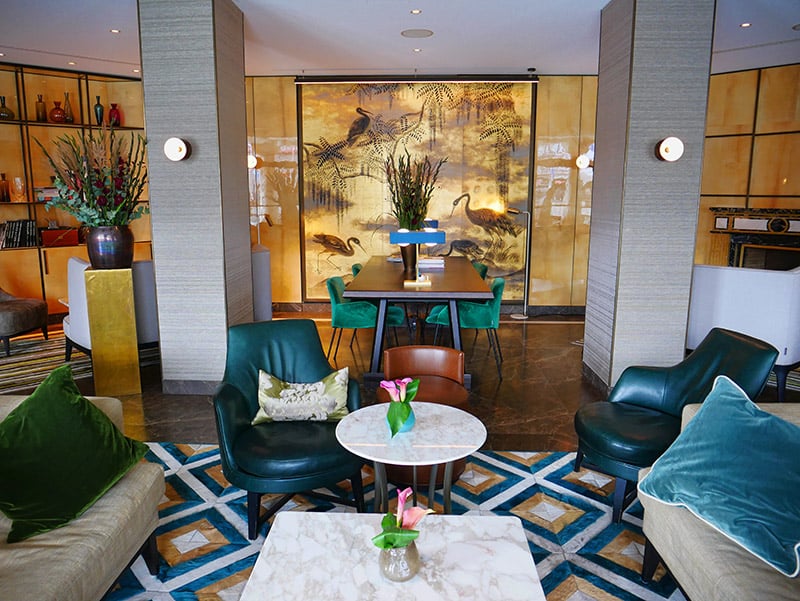 Cross over the river at Weinplatz via Gmüesbrugg bridge to explore the rest of Zurich old town. Most of it is pedestrianized and it’s a pleasure to wander around.

You’ll spot decorative enclosed balconies, wall frescoes and buildings adorned with flowers. Grossmünster is a Protestant church with twin towers that’s one of the most famous Zurich landmarks. 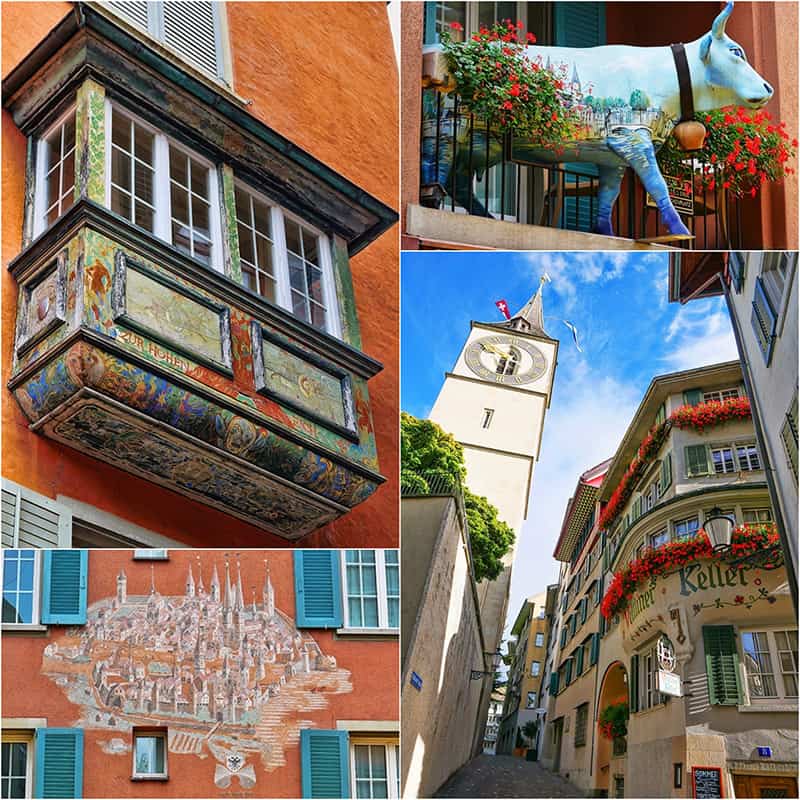 Another must-see if you’re visiting Zurich in a day is Cabaret Voltaire on Spiegelgasse. This colorful building was the birthplace of the Dadaism anarchic art movement in 1916. It is still open to the public, as an exhibition space and bar. 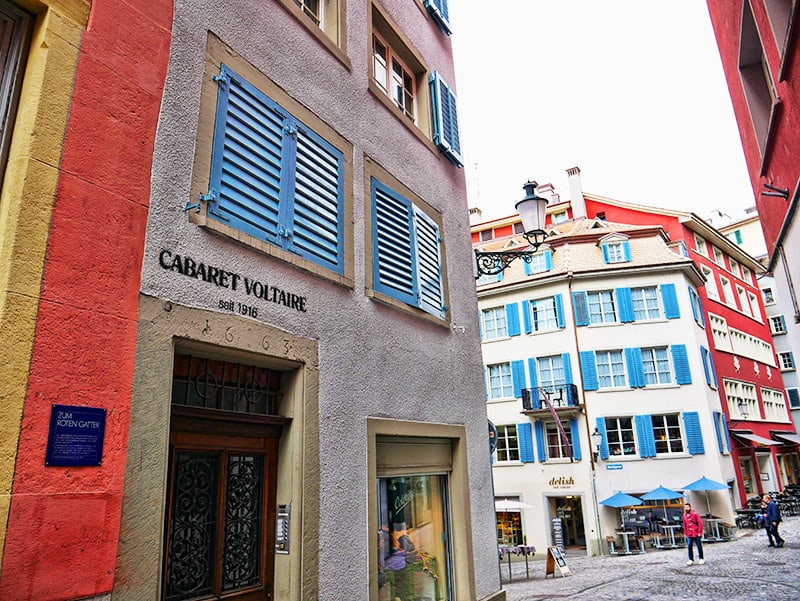 Nearby on Napfgasse, Cafe Schober is a historic coffee shop which has some delicious cakes and sweet treats. There’s a lovely terrace and the interior is decorated in Baroque style.

Also on Napfgasse, the My Muesli store is actually part of a Swedish chain but they have muesli boxes decorated with a Zurich photo that would make a great souvenir or gift.

If you’re looking for somewhere stylish to eat on this side of the river, Kronenhalle on Rämistrasse is an excellent choice. It’s famous for its art collection, with paintings by Picasso, Chagall, Matisse as well as its delicious Swiss cuisine.

While you’re walking around Zurich centre, you’re likely to come to Lake Zurich. Also known as Zurichsee, this is a popular destination for picnicking and watersports.

You have a nice view of the lake from Bürkliplatz, which is also a departure point for Zurich river cruises. There’s a flea market on the square every Saturday and a lovely river view from Bürkliterrasse.

Be sure to try fischknusperli, fried fish in batter from Lake Zurich at one of the local restaurants.

The main shopping street in Zurich is Bahnhofstrasse. The word bahnhof means railway station and this street starts at Zurich train station.

Zurich Main Station is impressive in its own right. Built in 1871, the vast building contains a 36 feet suspended guardian angel sculpture by the artist Niki de Saint Phalle.

Grieder is a luxury Zurich department store, in a six storey Gothic Revival building dating from 1913. Designed by Otto Münch, the building is also known as Peterhof. 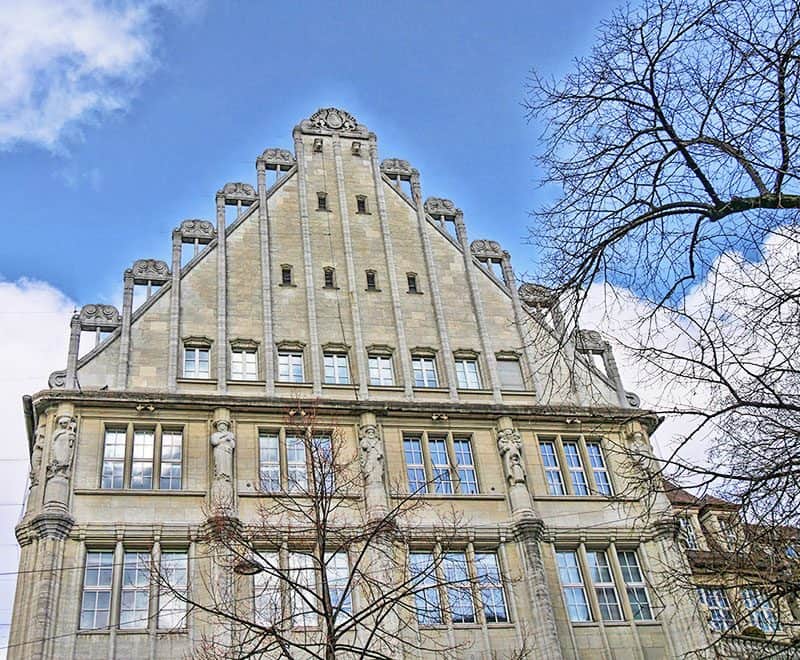 This extraordinary museum looks like a castle and was built in 1898. There’s a fascinating History of Switzerland exhibition, as well as a permanent display, Simply Zurich. 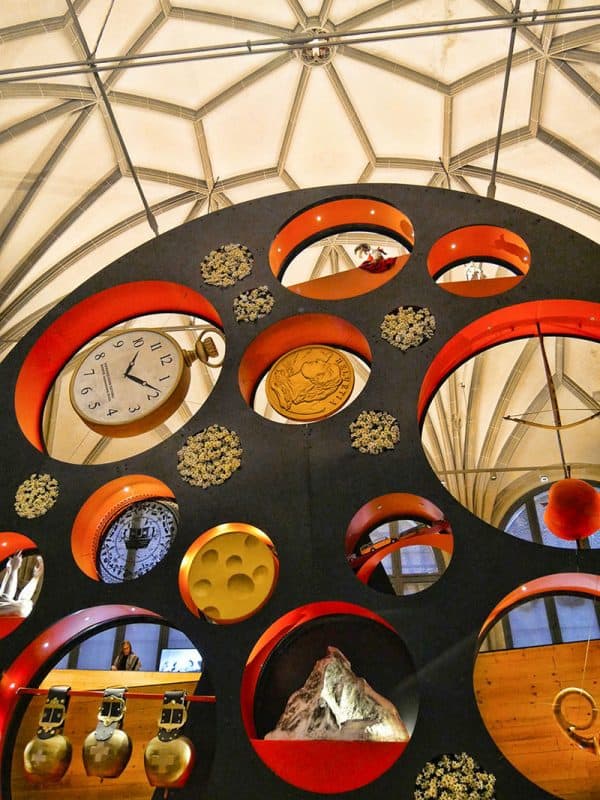 If visiting Zurich in one day, you also want to get a taste of the city’s contemporary side. After lunch, head to Zurich-West. It’s a trendy area with lots of cool bars and shops.

Frau Gerolds Garten is an oasis of greenery on Geroldstrasse. This casual eatery also holds events and is open until midnight in Summer. However, this hipster paradise is also popular in Winter for its delicious cheese fondue. 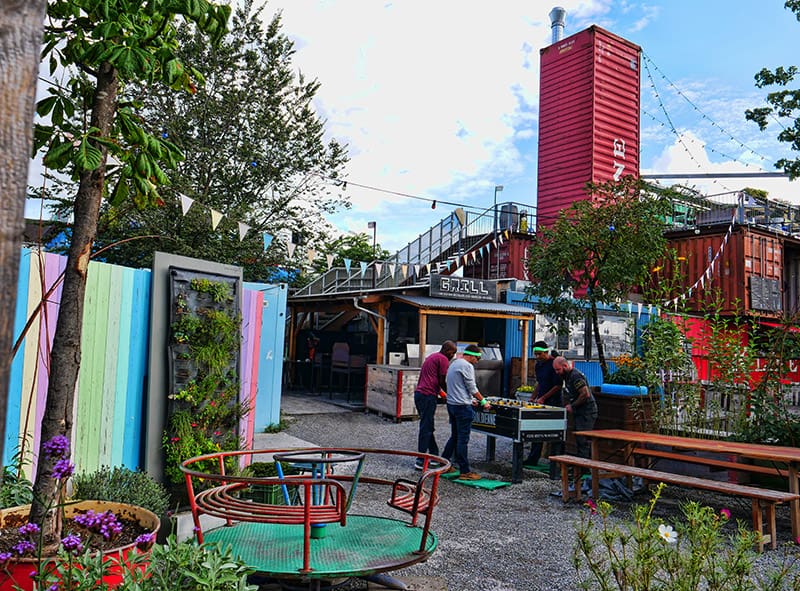 Don’t miss the colorful Gerold Cuchi umbrellas, in the alleyway just off Geroldstrasse. This colorful place is a very popular Zurich Instagram spot! 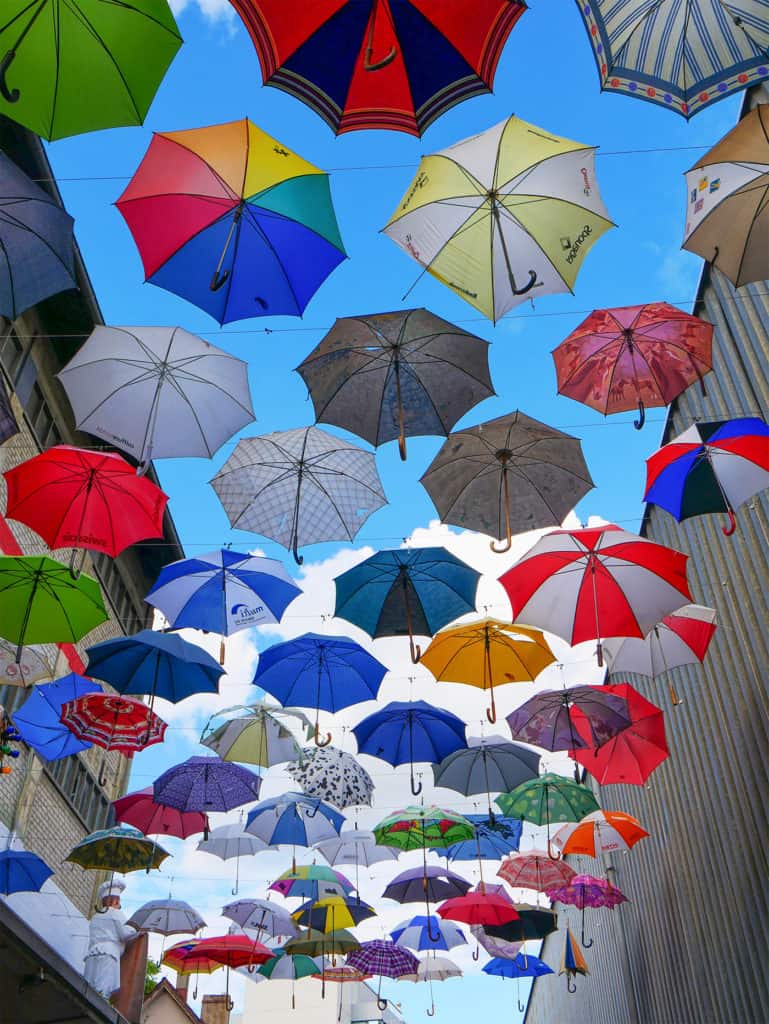 One of the most fun things to do in Zurich is to try out Citywave® , an urban surf experience tucked away on Geroldstrasse and open in Summertime. Whether you’re a surfer or not, it’s a fun place to grab a drink and watch the action.

At the end of Geroldstrasse you’ll find Im Viadukt on Viaduktstrasse. These former railway arches were built in 1894 and have been given a new lease of life with fashionable boutiques, delicatessens and a Market Hall gathering 20 local food vendors. 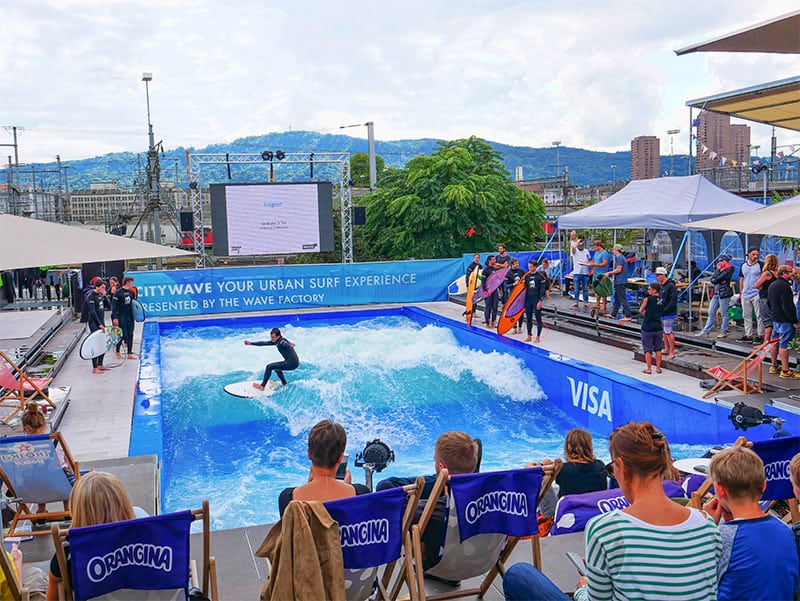 10 minutes walk from here, you’ll come to Schiffbau on Schiffbaustrasse. This former ship-building factory has been converted into a cultural centre where the Zurich Schauspielhaus theatre company holds performances on three stages. 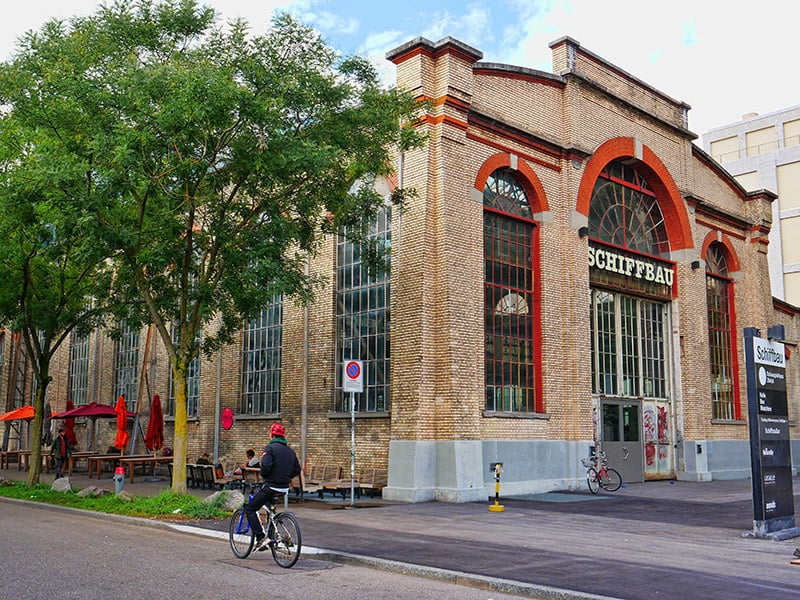 How to Get to Zurich

There are regular flights from most international airports to Zurich airport. We travelled with Swiss from London City airport and the journey took only 1 hour and 45 minutes. From the airport it’s only 10 minutes by train or 15 minutes by taxi.

As you can see, there’s a lot to fit in with just one day in Zurich, so why not spend longer there? Another great place to visit is Thermalbad, a luxurious spa in a former brewery with a rooftop pool and fantastic views over the city.

And if you happen to visit the city in September, then the Zurich Street Food Festival is a must. During this week-long celebration of all things foodie, there are events throughout the city and a huge selection of different cuisines of the world.

Where to Stay in Zurich

A great mid-range option is 25 Hours Langstrasse. Popular with locals for its lively bar, this 4 star Zurich hotel has lots of modern art and design touches.

Near Zurich airport, Kameha Grand Zurich is a fun option. This quirky Zurich hotel is just 5 minutes drive or 11 minutes by tram from the airport.

In Zurich city centre, we recommend Hotel Storchen. This luxurious 5 star hotel has a great location on Weinplatz overlooking the Limmat river. 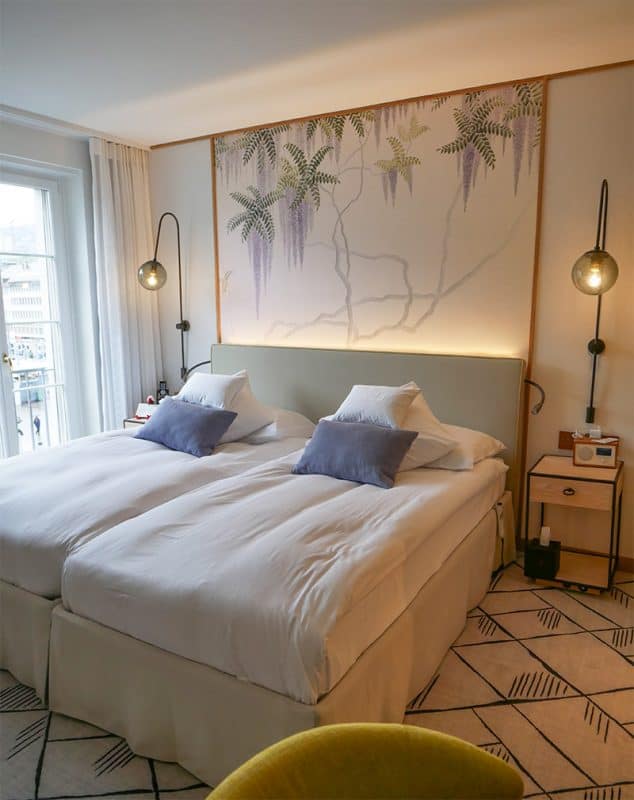 We hope that you’ve found these recommendations of places to visit in Zurich in 1 day helpful.

The 10 Most Beautiful Towns in Switzerland