Lucerne, with its idyllic location nestled amidst the Alps and overlooking Lake Lucerne, is one of Switzerland’s most picturesque towns. Also known as Luzern, the main language is Swiss German however everyone speaks excellent English.

Famed for its iconic wooden covered bridge, there are lots of things to do in Lucerne. Read on to find out what to see in Lucerne in 2 days or more with our travel tips.

What to See in Lucerne, Switzerland

We recommend starting in Lucerne Old Town where there are lots of interesting attractions. Wandering around the medieval squares, it’s easy to see why this is considered to be one of the most beautiful places in Switzerland.

If you’re wondering what to see in Lucerne, then look no further than the iconic Kapellbrucke, aka Chapel Bridge. This iconic Lucerne landmark is equally beautiful in the daytime or at night.

The 34 metre high Water Tower adjoins the bridge and dates from around 1300. At one point it was a prison and torture chamber – today it’s Switzerland’s most photographed monument. Constructed in the 14th century, its painted panels were added in the 17th century. 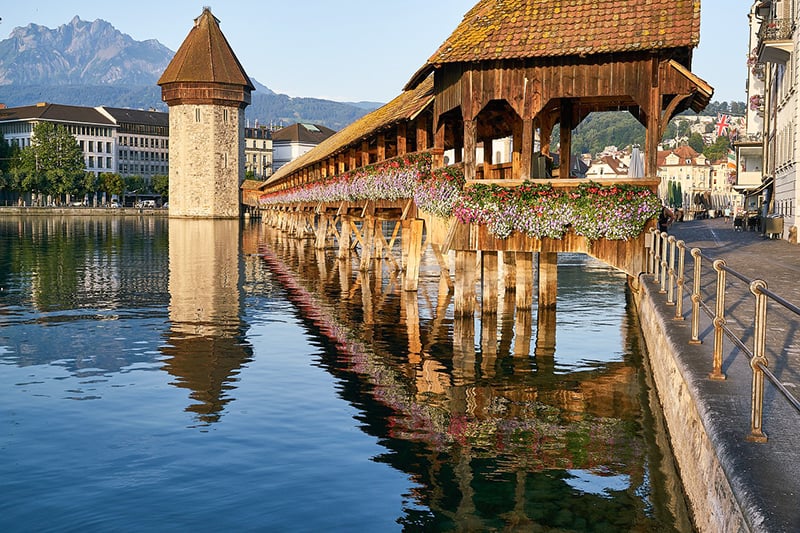 The neighbouring Old Town has some very attractive squares and buildings decorated with frescoes. Whether you have just 24 hours in Lucerne or more, this area is not to be missed.

Many visitors don’t realize that there’s a second covered wooden bridge in the centre, Spreuer Bridge. It’s the oldest timber bridge in Switzerland and dates from 1408. It features a Dance Macabre or Dance with Death added in the 17th century.

The city’s medieval fortifications, Mussegg Wall, comprise nine towers. Four of them are open to the public from April to November.

Lucerne is blessed with some fantastic museums and it’s well worth purchasing the Lucerne Museum Card. At CHF 36 per person it covers all the major museums. KKL Luzern is a new concert hall and contemporary art museum designed by famous French architect Jean Nouvel.

If you’re a fan of Picasso and Paul Klee then you’ll love the Rosengart Collection. It’s one of the best things to do in Lucerne for art lovers. There are some really impressive paintings by both artists and also features works by Chagall, Monet, Bonnard and Matisse.

One of the most fascinating Lucerne attractions is the Bourbaki Panorama, an enormous painting created in 1871 by Edouard Castres. He had experienced the French-German war of 1870-1871 as a Red Cross volunteer and this round tableau is surprisingly lifelike. In recent years props such as people and drums have been added in front of the painting, making it even more realistic.

The Gletschergarten or Glacier Garden is close by, and great fun for children or big children like us. This natural monument was discovered in 1872 by a workman and proves that Lucerne was covered by glaciers during the Ice Age.

There’s an Alhambra Mirror Maze that is great fun to wander around. Inside the maze and outside the building, there are distorting mirrors to try out.

Outside the Glacier Museum you’ll find the impressive Lion Monument. This famous Swiss monument was described by Mark Twain as “the saddest and most moving piece of rock in the world”.

It depicts a dying lion who symbolises the bravery of Swiss soldiers in 1792. They died whilst protecting the Tuileries Palace in Paris during the French Revolution.

Standing directly opposite Chapel Bridge, on the banks of the river Reuss, Lucerne Jesuit Church is a Baroque masterpiece. The church was consecrated in 1677 and the iconic onion towers were added in 1893.

Inspired by the Church of the Gesu in Rome, this was the first important sacred building constructed in the baroque style in Switzerland. The church is open from 6.30 am to 6.30 pm every day apart from Mondays and Thursdays when it opens at 9.30 am.

We’ve saved one of the best attractions in Lucerne until last. The Transport Museum or Verkehrshaus der Schweiz might sound like rather a specialised interest but in fact it’s a must see, particularly if you’re with children.

They will love having a go in the road construction arena and on the flight simulators. Put on the Swiss slippers provided and step onto Swissarena, the world’s largest walkable aerial photo of a country.

The Transport Museum is located next to Lake Lucerne and it’s a lovely area for a stroll afterwards. If you only have one day or 36 hours in Lucerne then we’d advise on skipping some of the museums if the weather is good and walking around the lake instead.

If you’re wondering where to eat in Lucerne, take the world’s shortest funicular up to the Montana Hotel. For a taste of luxury and fantastic views towards Lake Lucerne, their Art Deco Scala restaurant holds 15 Gault-Millau points. You’ll pass the Swiss Hospitality School on the way up in the funicular.

Mill’feuille is popular with locals for its unfussy dishes. Try the Fritschi-Pastete, puff pastry filled with a meat and creamy mushroom sauce.

The Old Swiss House is conveniently located next to the Bourbaki Panorama and close to the Lion Monument and Glacier Museum. Still owned by the same family, it’s famous for its pan fried escalope prepared at the table.

Where to Stay in Lucerne

There are some stunning hotels in the city centre and the surrounding area. One of the most luxurious places to stay in Lucerne is Château Gütsch. This small boutique hotel has been lovingly restored to its former glory.

With panoramic views towards the town and the lake, its reachable by its very own cable lift and by road.

This charming city is easily accessible via Zurich airport and from there it’s a 45 minute train ride or drive to the centre. Whether you have a weekend, 36 hours in Lucerne or more, it’s a magical place that everyone should visit at least once.

With a little more time, you’ll be able to visit majestic Mount Pilatus and the surrounding area or head further afield to Lugano near the Italian border.

Is Switzerland Really So Expensive In 2021?

2 thoughts on “What To See In Lucerne In 2 Days: Best Lucerne Itinerary”