Although not a large country, Switzerland is blessed with so much beauty that many other destinations should be envious. Imagine waking up in the morning to the sound of cowbells and looking out of your hotel window with views of majestic mountains and shimmering clear blue lakes. I quote someone who summed up Swiss beauty perfectly, “Every picture I took in Switzerland looked like it’s from a postcard.”

One interesting fact is that many Swiss speak several languages. These can include the four national ones – French, German, Italian, and Romansh. However, you will find fluent English spoken almost everywhere.

Let’s break down the reasons to consider a Switzerland vacation.

Switzerland has an abundance of scenic lakes and it could be difficult to choose which one(s) to include on your trip to Switzerland. There are several thousand lakes in the country but obviously, you’ll want to primarily visit the lakes of significance.

Lake Geneva is the largest body of water in Switzerland by far. On the Swiss side, you have the Jura Mountains, and across the border in France, the glistening, snow-capped peak of Europe’s highest mountain, Mont Blanc is visible on clear days. Montreux is located at the eastern end of the lake between steep hills and the lakefront. It is known for its mild climate and its annual International Jazz Festival in July. Walk along the promenade, which is lined with flowers and beautiful 19th-century buildings. Just outside the city is the Chateau de Chillon, the most visited castle on Switzerland tours, situated on an island. The castle can be reached by boat from Montreux. Inside the castle are wall paintings from the 14th century, subterranean vaults and dungeons. Lausanne is one of the must-visit places on trips to Switzerland. It has been called the most beautiful city in Switzerland, however, in fairness, there are many rivals to consider. The city hugs the edge of Lake Geneva and climbs up the steep hillsides to the historic Old Town from which you can have spectacular views. 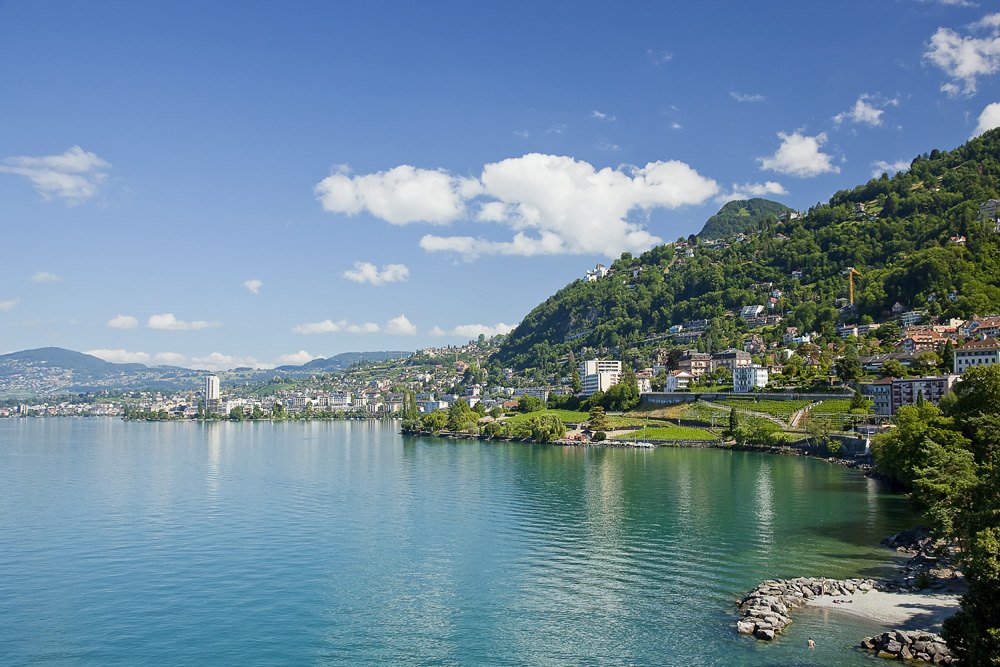 If looking for an attractive lakeside city on a trip to Switzerland, Lucerne, located on the fourth-largest lake, is the place to visit. It has an old, medieval town with 15th-century colourful houses and covered bridges. Lucerne is also a great base for exploring the area. The nearby impressive mountains include Mount Pilatus, which literally overlooks the city and can be reached by a cogwheel railway. Wonderful boat cruises can be enjoyed, lasting from one hour up to 3 hours on Lake Lucerne. 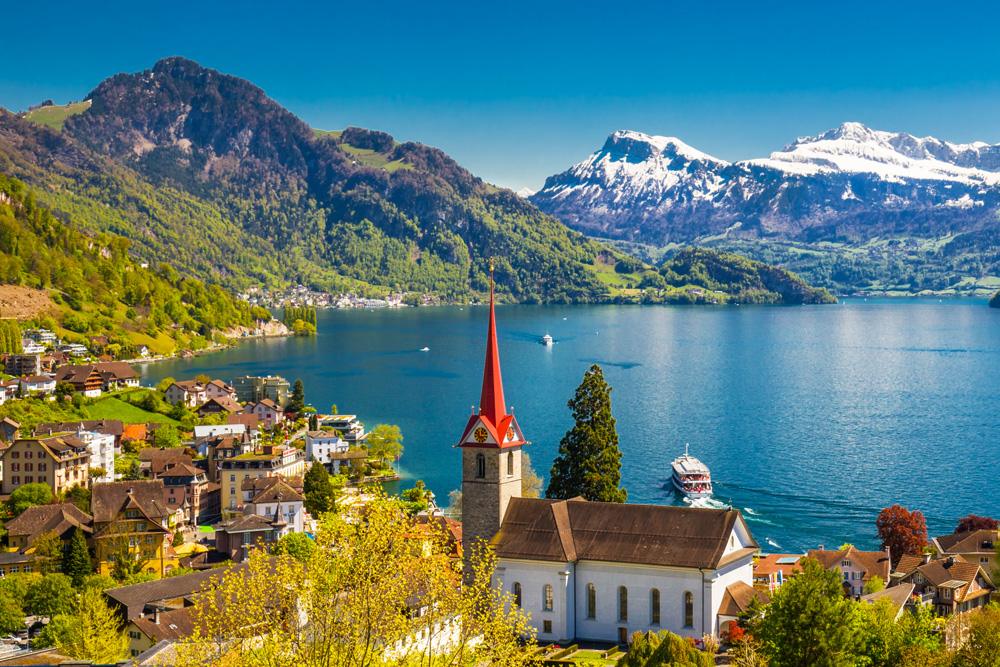 The city of Lugano has been described as a town “with a Mediterranean flair,” with its palm trees and “Swiss with an Italian accent.” (The principal language here is Italian.) Located on the lake, it is surrounded by mountains and is a town of numerous parks, sub-tropical plants, and colourful villas. Its historic centre is traffic-free. The two closest mountains to Lugano are Monte San Salvatore and Monte Bre, both of which can be reached by funicular railway which provide panoramic views of the town, the lake, and the alpine scenery including views into nearby Italy. Lake Lugano is perfect for boat cruises. There are hop on hop off cruises to allow you to explore the numerous attractive villages located on the lake’s waterfront. 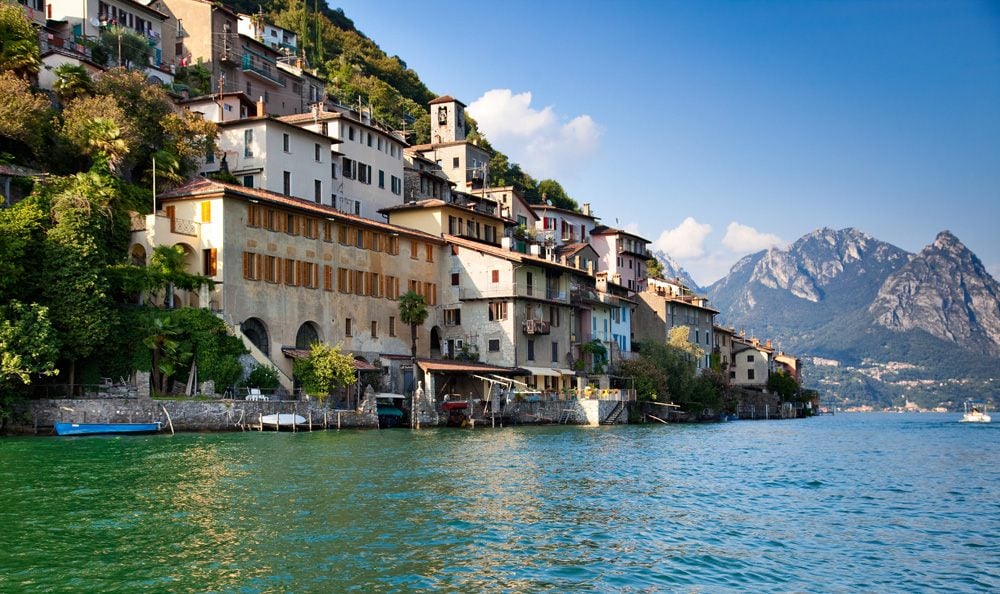 These two lakes are connected by the town of Interlaken, where it is recommended to stay for not only great lake views, but due to its proximity, to several delightful mountain resorts such as Grindelwald, Wengen, and Murren, all reached by local train or cable car. Boat trips can be taken on turquoise-coloured water from both lakes. Close by is the Jungfrau region, quintessentially typical of what Switzerland vacations are all about. It offers mountain scenery with alpine peaks, waterfalls, beautiful lakes, unusual railway journeys, and the opportunity to simply relax in gorgeous scenic countryside. The Jungfraujoch is a mountain reached by a cogwheel railway that takes visitors up to the top. On arrival at the peak, you will feel you are on top of the world. On clear days, the view extends to the Vosges Mountains in France and the Black Forest in Germany. 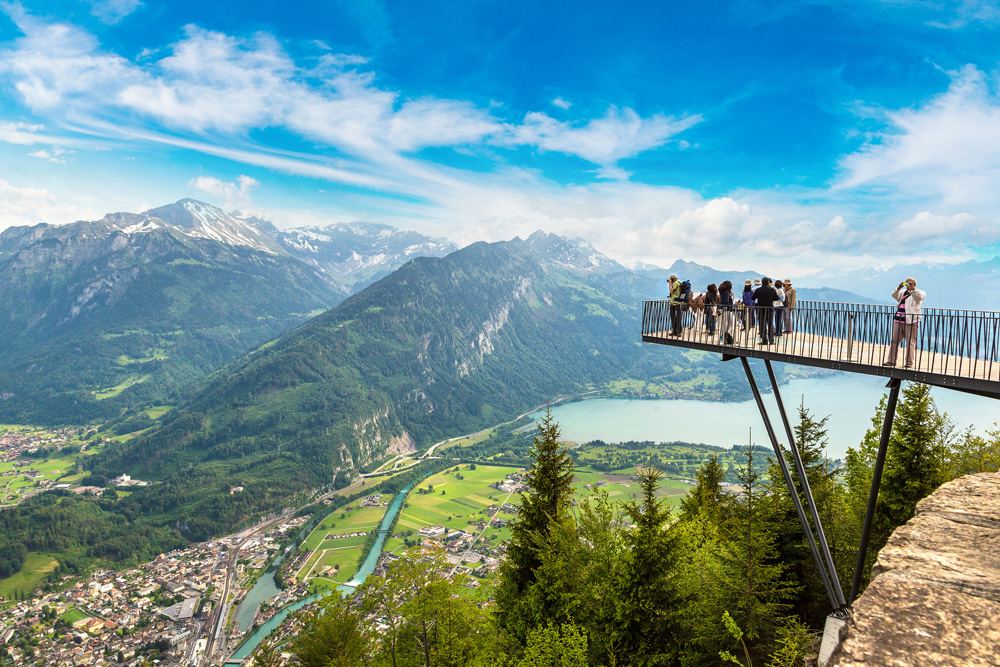 There are many outstanding mountain resorts to choose from. Here is a small selection to consider for a trip to Switzerland.

By far the most exclusive of resorts on Switzerland vacations, St. Moritz is known for its vast choice of stunning hiking trails. There is a funicular which takes you up to Corviglia, where you have sweeping alpine views. From here, take a cabin cable car for the 10-minute ascent up Piz Nair. In town, the Engadine Museum houses more than 4,000 items illustrating local life from the 13th through to the 19th century. 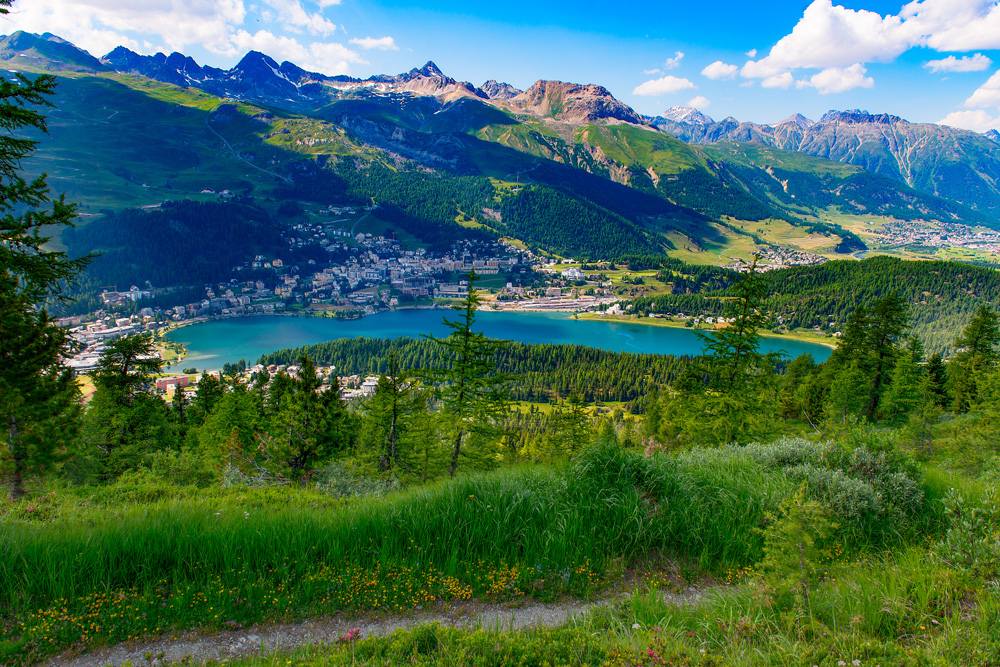 Zermatt has retained its old-world charm which combines chic upscale modern stores and fine dining. Only electric vehicles areallowed here to prevent pollution from obscuring one of the European Alps’ highest alpine peaks, the Matterhorn. Perhaps the most photographed mountain in the world, heading to the Matterhorn is a must. It juts up into the sky and its peak is one of the most spectacular sights anywhere, not to be missed on Switzerland vacations. To reach the Matterhorn, you take Europe’s highest cogwheel railway, the Gornergratbahn. En route, you will view 7 glaciers and 29 peaks. Regular avalanches send the snow down to accumulate on the glaciers at the base of each face. 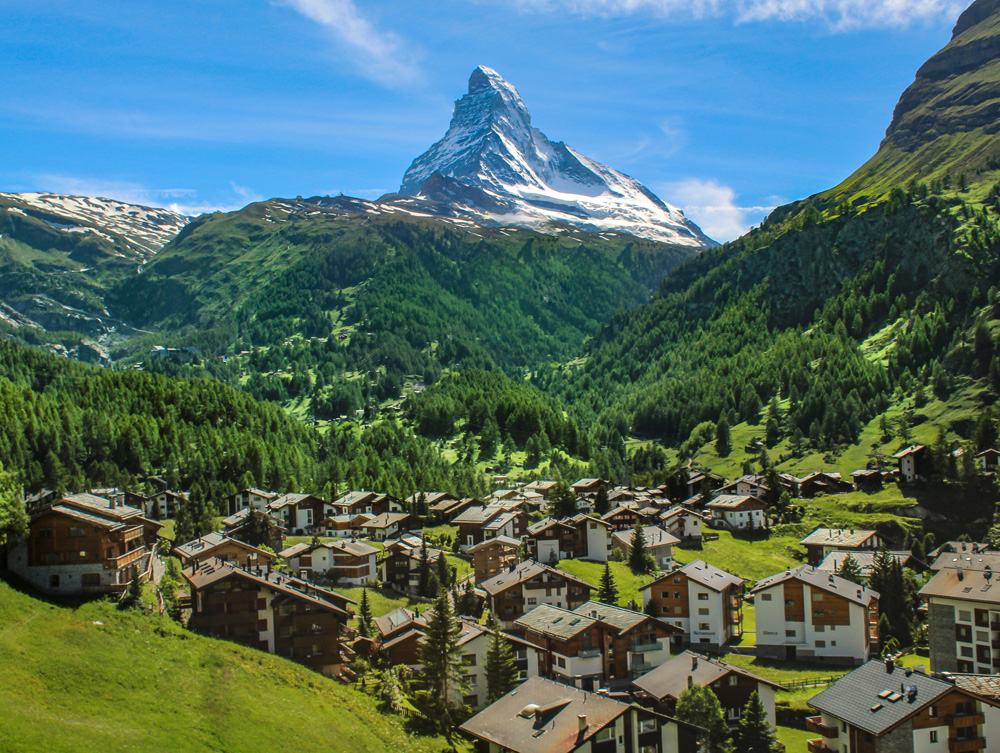 Gstaad, with its top hotels and gourmet restaurants, is a car-free resort in the Bernese Oberland and a popular destination for international celebrities. In the town is a picturesque avenue full of numerous shops, restaurants, art galleries, and hotels. The area around Gstaad is known for its walking and hiking trails of varying degrees of difficulty, its mountain air, and overall ambience. From here, you can take a cable car 10,000 feet up to the top of Les Diablerets Glacier. 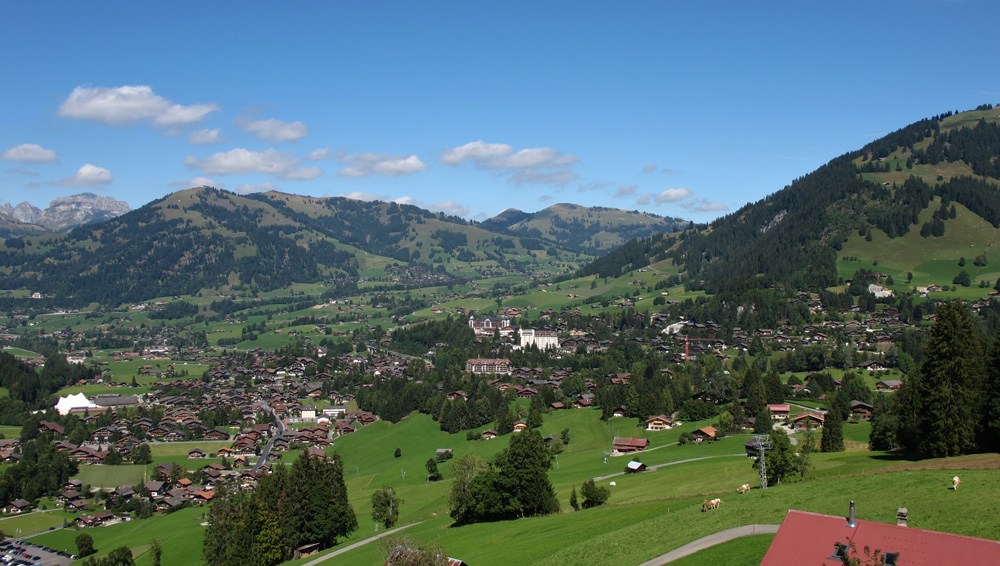 Zurich is the largest city in Switzerland, located at the northern tip of Lake Zurich. It is a city with a long history and boasts many museums (approximately 50) and art galleries (approximately 100). Zurich’s Old Town (Altstadt) contains medieval houses, twisting, narrow lanes, guildhalls, and town halls from the Renaissance period. It is living history and is where most of the churches and interesting old buildings are to be found, as well as the most expensive stores on the famous Bahnhofstrasse. Nearby Lindenhof Hill is the site of a Roman castle. The hilltop area – including its prehistoric, Roman and medieval remains – is listed as a Swiss heritage site of national significance. Something to consider while staying in Zurich is to take a cruise on Lake Zurich, which can last from 1.5 hours to 4 hours. The lake’s scenic backdrop makes this a worthwhile excursion. The Polybahn is a funicular railway which carries you up to a terrace from which you have excellent views of the city and lake. 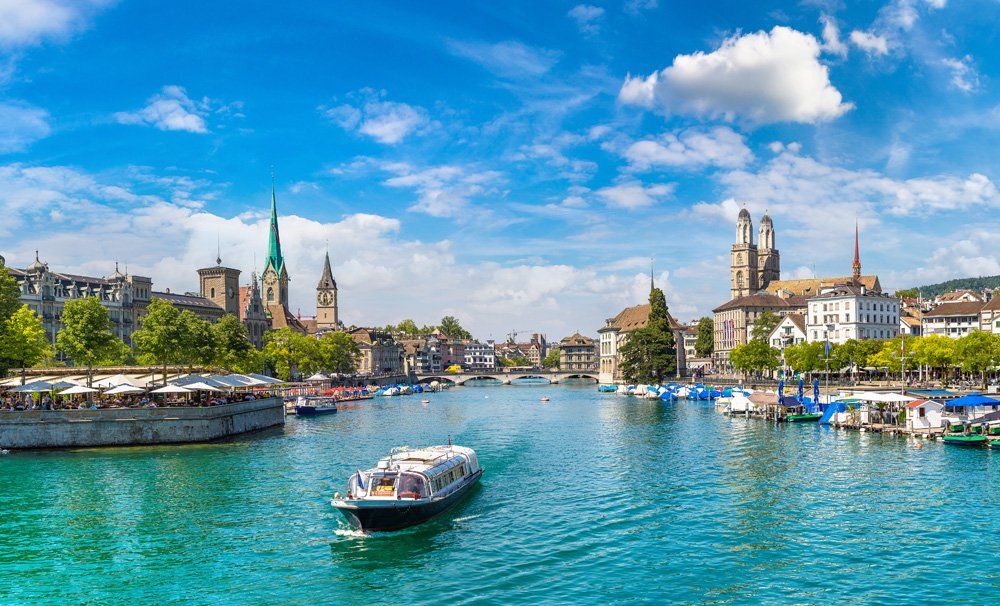 Geneva is the second-largest city in Switzerland, located on the lake of the same name. It is the European headquarters of the United Nations, the World Health Organization (WHO), and the International Federation of the Red Cross. One of the most interesting sights to see in the city while on a trip to Switzerland is the Jet d’Eau (Water-Jet), a large fountain and one of the city’s most famous landmarks. It is one of the largest fountains in the world, visible throughout the city, and is illuminated at night. Another major landmark is the Palace of Nations (Palais des Nations), built to serve as the headquarters of the League of Nations. The Old Town is a picturesque section of Geneva with its cobblestone streets, historic buildings, sidewalk cafes, and restaurants. Among the highlights on Switzerland tours are the City Hall, which is close to Rousseau‘s birth house as well as various antique shops with all sorts of interesting items in their window. The fascinating Quartier des Grottes is an area with interesting shops and a series of residential buildings called “Les Schtroumpfs,” where the architects tried to avoid all straight lines. A pleasant way to spend time in Geneva is to take a cruise on the beautiful Lake Geneva, with its attractive panoramic scenery. 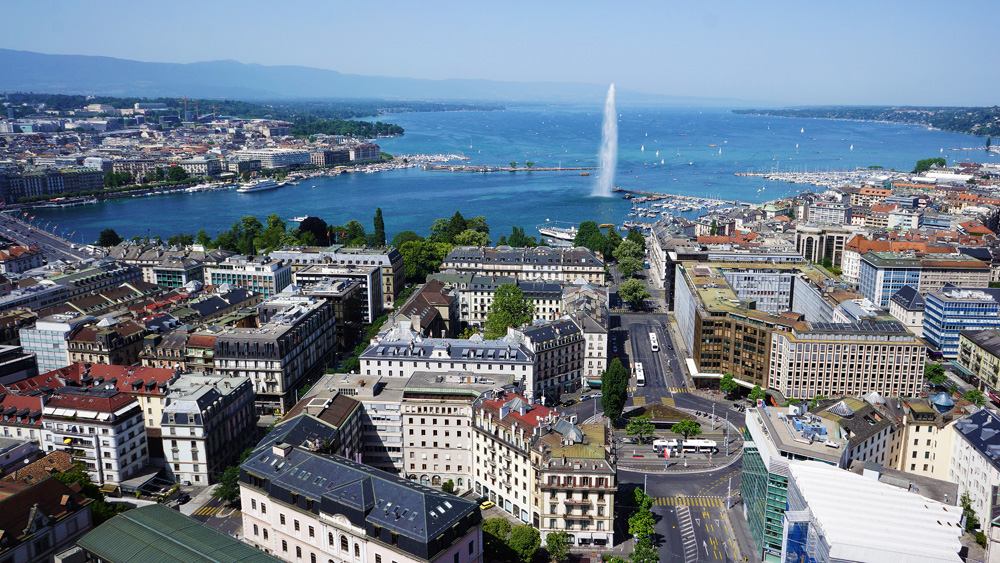 The centre of Bern, Switzerland’s capital, is a UNESCO World Heritage site. This beautiful Old Town has 6 kilometres/3.5 miles of medieval arcades dating back to the 12th century. There are a number of decorative fountains depicting historical and folkloric characters. The arcades contain many shops and bars. Bern’s ornate clock tower (Zytglock) is where revolving figures appear and whirl around at 4 minutes before each hour. There are tours to see how the clock mechanism works. The 15th-century Gothic cathedral has Switzerland’s tallest spire. You can climb a spiral staircase and enjoy views of the city from the top of the cathedral. Bern, of course, is famous for its bears. The Bear Park here is home to two bears that have been living in this park since 2009. The previous home for the bears was in the bear pit in the centre of the city. 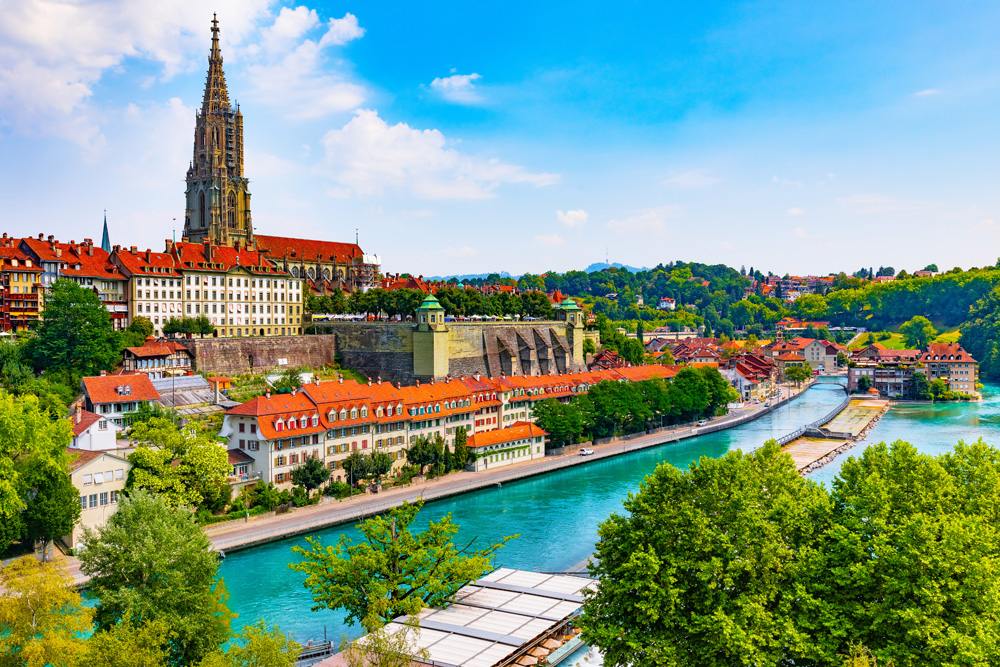 Trains in Switzerland operate extensively throughout the country, are very efficient, and highly recommended for travel from one place to the next. From them, you will pass through the very best scenery you can encounter on a trip to Switzerland.

I mentioned the cog railways, one from Lucerne to Mount Pilatus and the other from Zermatt to the Matterhorn. Two more journeys you can consider on Swiss vacations: The Bernina Express is a train which can be boarded at Davos, St. Moritz, or Chur and travels to Tirano in the Italian Alps. You can do the trip in reverse or both ways. The 4-hour leisurely rail journey travels along a route which has been declared a UNESCO World Heritage Site in itself. This private train has enlarged windows to allow you to view the spectacular Alpine scenery and also supplies an audio guide to enhance your experience. 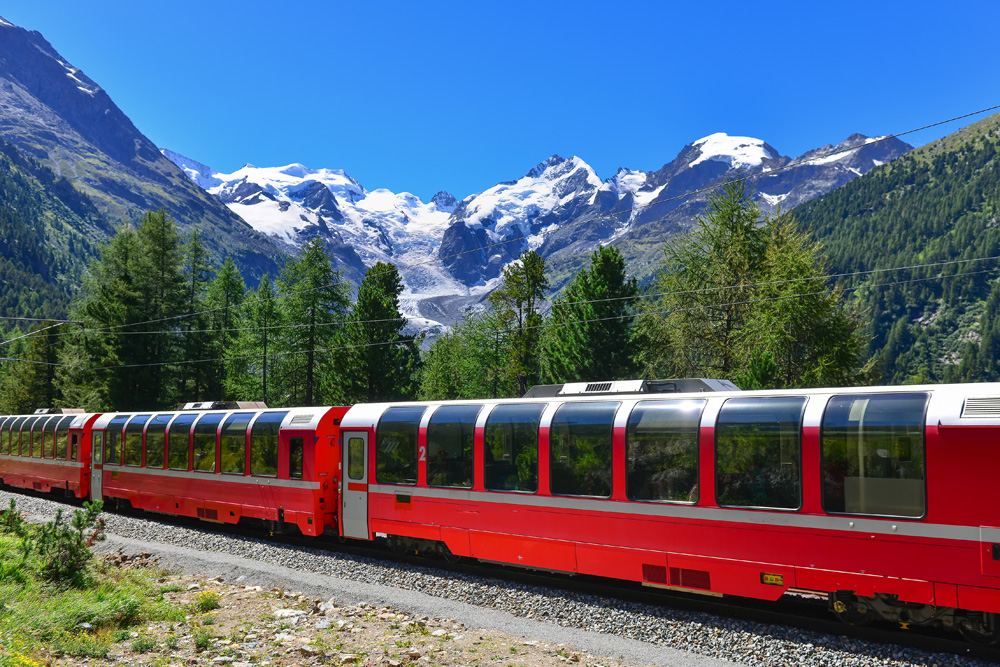 The Glacier Express can again be joined in Davos, St. Moritz, or Chur. It travels across the southern part of Switzerland to Zermatt. The journey can be done in reverse. It is a leisurely 7 1/2-hour summer-only trip which crosses steep mountains while going through 91 tunnels and over 291 bridges. You will experience amazing panoramic views of snow-capped mountains, rushing rivers, alpine pastures, and charming Swiss villages. 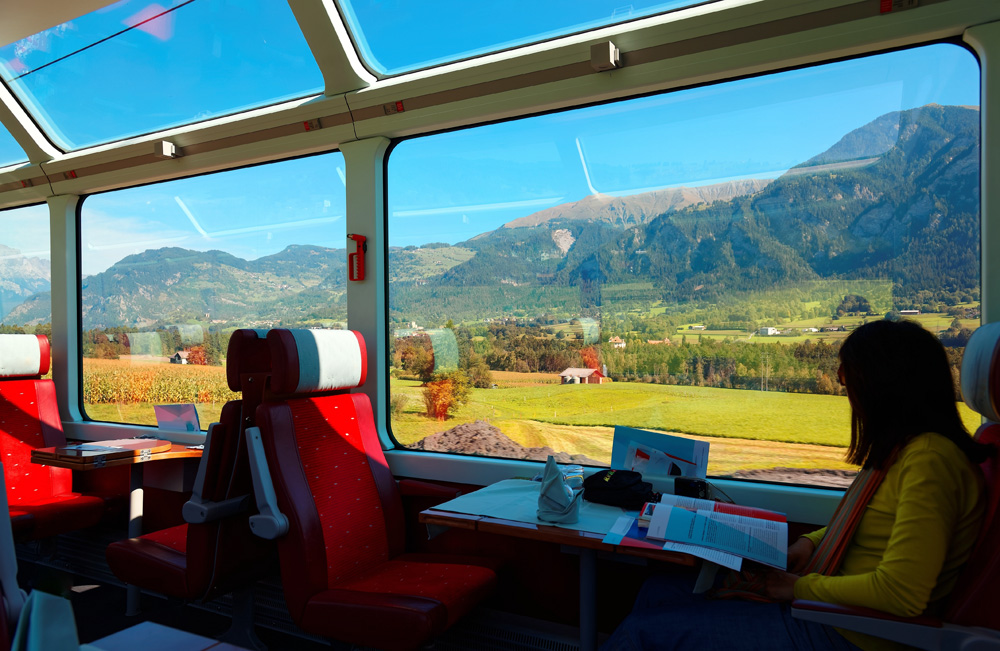 When it was completed in 2016, Switzerland’s 55 kilometre/35 mile-long Gotthard Base Tunnel became the world’s longest rail tunnel. The world’s second-longest land tunnel (and a feat of modern engineering) is in Switzerland too – the 39 kilometre/21 mile long Lotschberg tunnel under the Bernese Alps.

Finally, What about the Chocolate, Cheese and Watches?

I could have mentioned banks and Swiss army knives but they are not vacation subjects! The Swiss, however, have also been making chocolate since the 17th century, mainly milk chocolate, and I am told the Swiss chocolate industry employs 4,500 people! Think Lindt, Toblerone, and Nestle.

There is a great variety of cheeses in Switzerland. There are more than 450 varieties of Swiss cheese and nearly half the milk produced in Switzerland is turned into it. The most produced cheeses are Emmenthal and Gruyere. Try dining on raclette, which is pieces of melted cheese usually added to small potatoes, or enjoy a fondue. 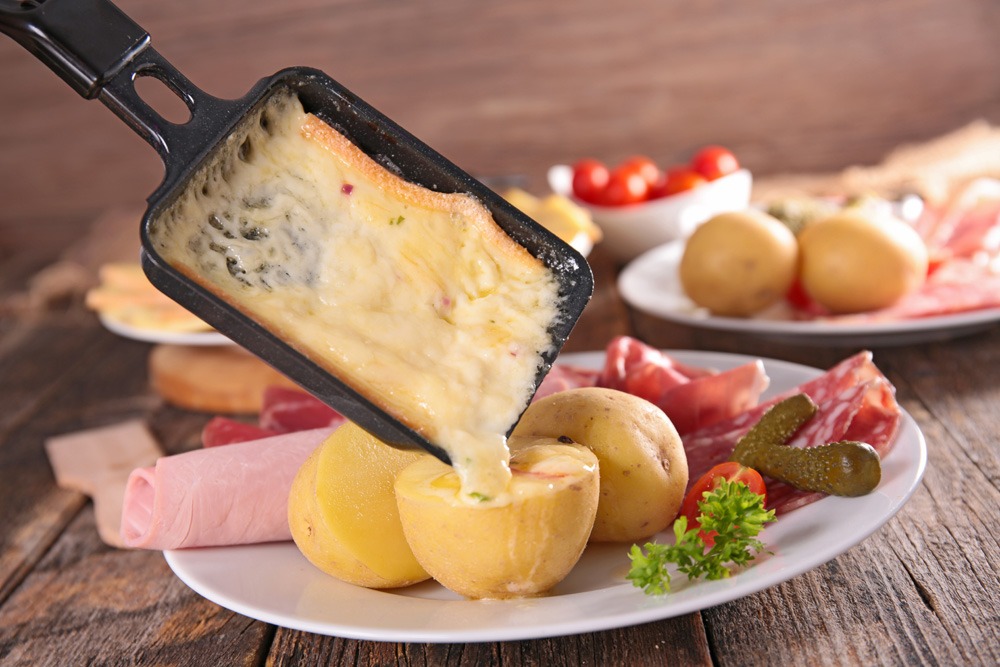 Swiss watches are known as symbols of luxury and status due to their quality, attractive designs, and reliability. Think Rolex, Cartier, Omega, Longines, Tissot, and Swatch. A surprising fact is that most of the watches in Switzerland are made in a very small area, in the French-speaking part of the country.

A Scenic Hike through the Vineyards of Lavaux, Switzerland

20 Most Beautiful Lakes in Switzerland

Vevey, Switzerland’s Top 5 Things To Do