The Catlins is a rough and wild region full of forest-covered rolling hills is filled with beautiful waterfalls, rugged coastlines, and very rare wildlife. Arguably, The Catlins is one of the most unique and interesting areas in New Zealand but often gets overlooked because of its remote location.

The Catlins is the southernmost area of New Zealand’s South Island, in between Balclutha and Invercargill. This area can most definitely be categorized as of-the-beaten-path with all its hidden bays and thick forests. As soon as you venture off the main road you land on dirt and gravel tracks taking you towards a new WiFi-less adventure. These are the best things to do in The Catlins, New Zealand:

Nugget Point is the most well-known attraction in the Catlins, and if you ask us also the most picturesque. On top of the rugged cliffs at the end of a rocky peninsula proudly stands the Nugget Point Lighthouse in solitude, watching wave after wave crash onto the rocks or “nuggets” in the water. Nugget Point owes its name to Captain Cook, who when he first saw these rocks thought they looked like gold nuggets, so he named it Nugget Point. If only they were actual gold nuggets right?! Nevertheless they make for very unique and beautiful scenery.

From the car park, it is a 20-minute walk alongside the impressive cliff’s edge of the peninsula to the lighthouse, and if you take the time to look down into the water every once in a while you might spot some of the resident sea lions or even some seals with their pups playing around in the tidal pools in between the rocks.

Another worthy stop just next to Nugget Point is Roaring Bay. This beautiful bay is a breeding ground for Yellow-eyed penguins, the rarest penguins in the world. With some patience and a bit of luck, you can spot them from the observatory in the bay, usually just after the sun has gone down. 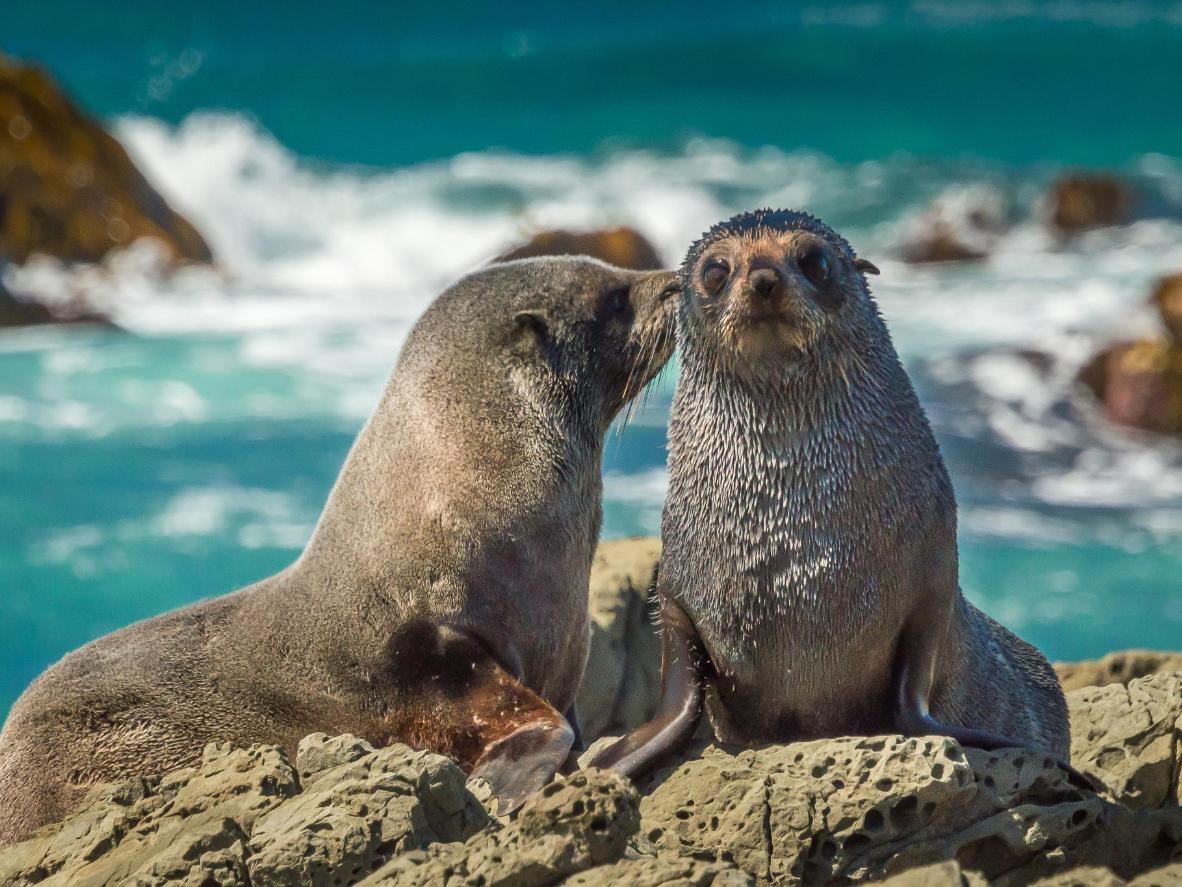 Cannibal Bay sure sounds scary, but don’t worry, there is no one that will try to eat you waiting for you here. Instead, you’ll likely find some big sea lions napping on the barren beach. If you get to Cannibal Bay and it looks like there are no sea lions anywhere, look again. They often partly dig themselves into the sand to keep themselves cool, this way they also blend in and you might mistake them for a rock or just a heap of sand.

Keep your distance from sea lions as they can get quite aggressive, especially if you get between them and the direction they’re heading. They may look fat and slow, but even on land, they’re surprisingly fast.

Purakaunui Bay is rough and wild, but very calming and peaceful at the same time. It lies hidden at the end of a 10-kilometer long gravel road and apart from the occasional like-minded adventurer, heaps of sheep and some seals, and sea lions, you won’t find another soul here. The bay has a wide beach and is surrounded by stunning sea cliffs that are only surpassed in ruggedness by the cliff on the West Coast.

Tom went exploring a bit and climbed up the cliffs on the northern side of the bay. He loved the view so much that he went back twice, once to get the drone and take some pictures, and once more to show this spot to everyone who was interested in coming along.

Purakaunui Bay is also a great spot for experienced surfers as it has the largest recorded winter waved in the country, that neatly breaks and then roll onto the beach, and there is a DOC campsite with basic facilities so you can even stay the night (or two, or three) if you want.

The Catlins is home to some spectacular waterfalls. One of them is Purakaunui Falls, close to Purakaunui Bay. This waterfall cascades down over three tiers and is actually one of the most photographed waterfalls in New Zealand. A 10-minute walk takes you to a viewing platform where you can take your picture, or if you don’t mind a bit of a scramble and the risk of getting wet, you can hop over the rocks in the pool at the bottom and climb up the waterfall itself as Zi did. 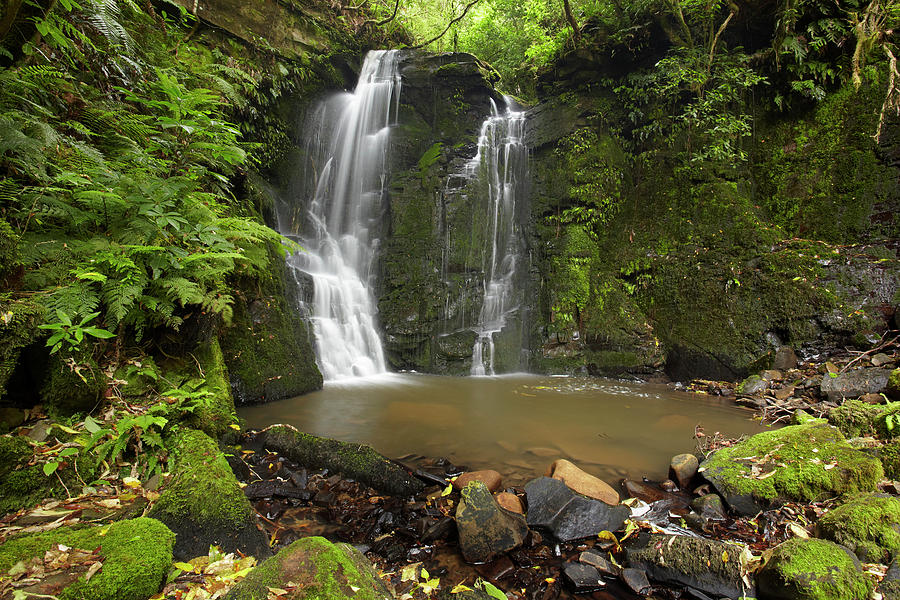 Next up are two waterfalls very close to each other on the same stream. A few minutes after you start walking from the car park you get to a fork in the track. Take the left lane to get to Matai Falls. The falls are only 10 meters high, but the water drops in a very neat rectangular shape, making it a great waterfall for long exposure photography.

If you take the right lane at the fork takes you up a short but steep climb to get to the Horseshoe Falls. Just like the Matai Falls, they are about 10 meters high. The rocks that the water drops over are kinda shaped like the outer bend of a horseshoe, giving it its name. 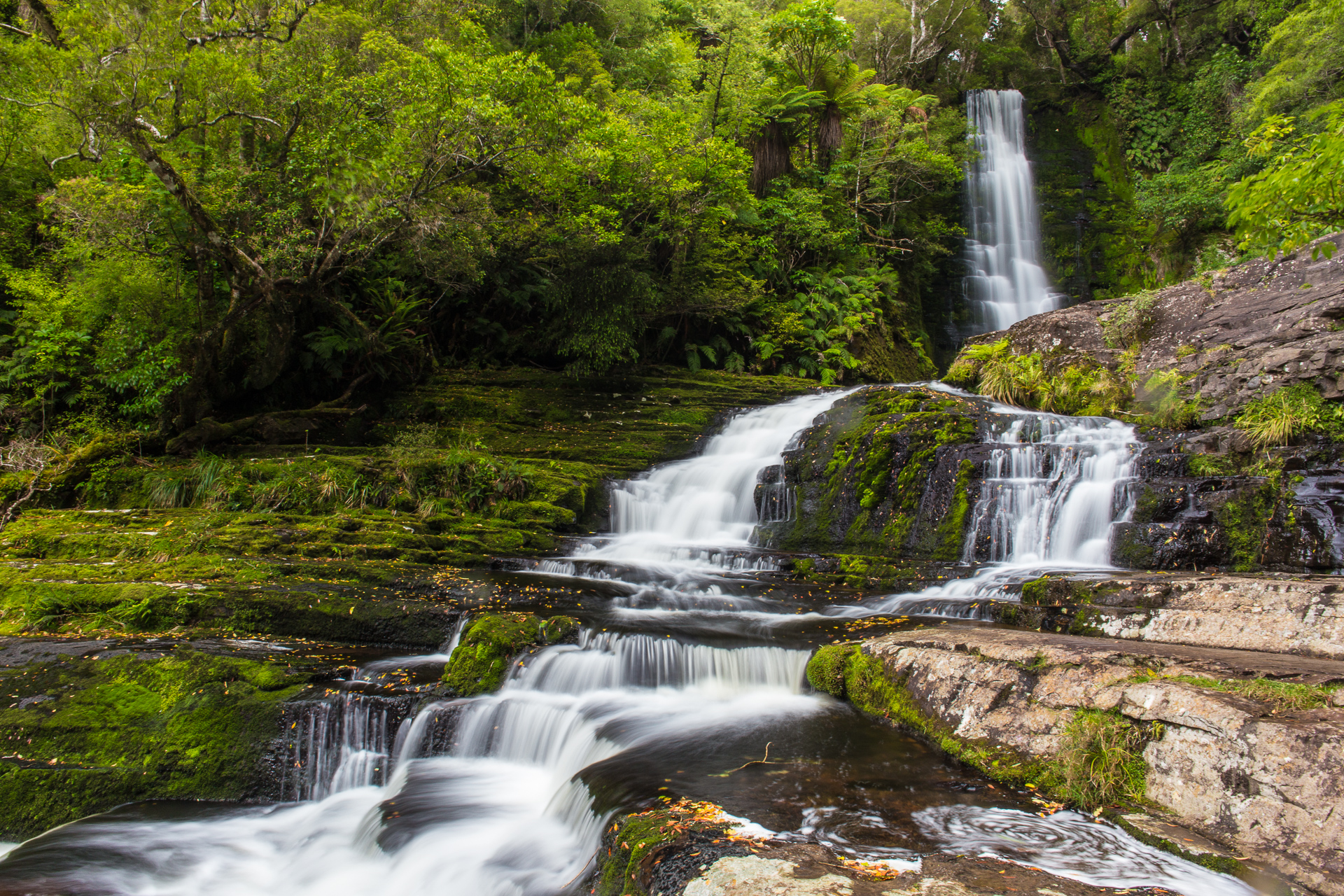 The stunning McLean Falls is our favorite waterfall in the Catlins and even one of our favorites in all of New Zealand. Divided into a top part and a bottom part, the falls at the top part dropdown 22 meters into a pool, to then further cascade down over multiple terraces and finally hurl down smaller falls at the bottom part.

From the carpark, it is about a 15-minute walk to an intersection in the path. Take the left lane to get to the bottom part, and take the right lane which goes up to the top part. Make sure to not miss the right lane, as the top part is by far the most impressive. Once you get to the top part, you can pretty easily climb up some rocks to get to the pool at the foot of the 22 meter high falls, and if you go to McLean Falls in the morning chances are high that you have it all to yourself.

On the northern end of the beautiful Waipati Beach, you can find another cool natural feature. Here thousands of years of wind and waves crashing onto the sandstone coastal cliffs have carved out a 200 meter long and 30-meter high sea cave. During low tide, the water retracts from the cave and you can walk into the caverns.

If you’re lucky, you might even spot some adorable little blue penguins, the smallest penguins in the world, at the far end of the cave. 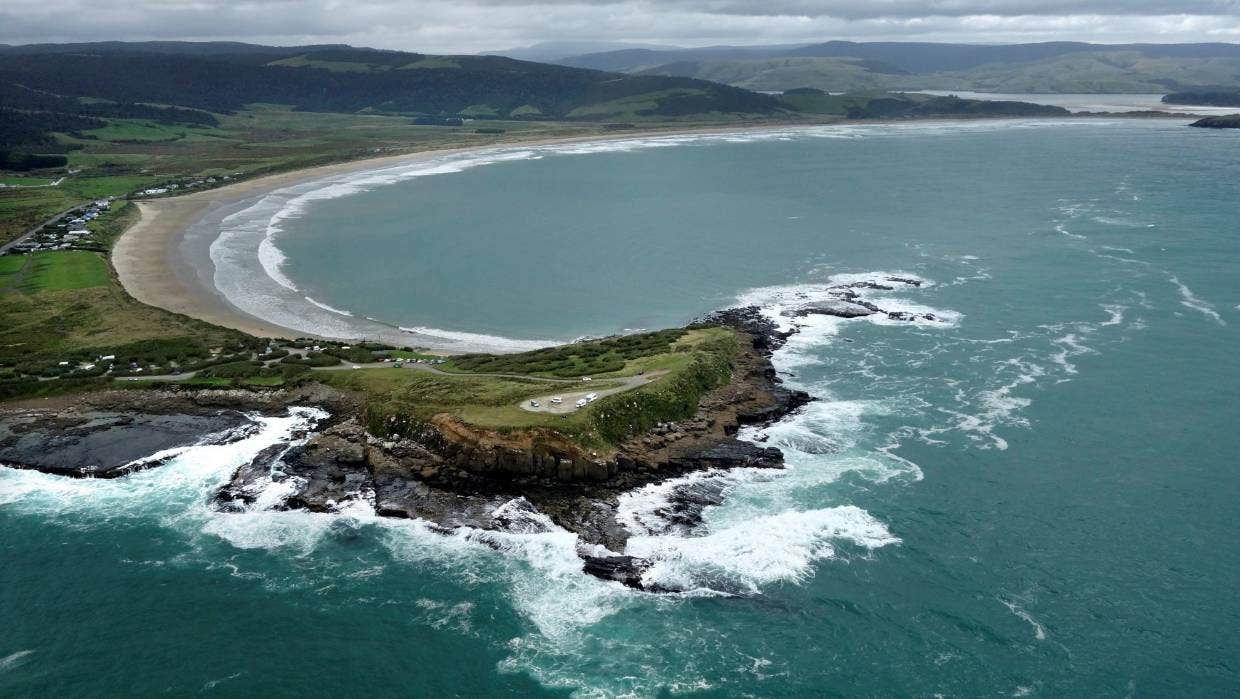 If you like seeing rare wildlife, then you’ll love Curio Bay. Curio Bay is where the best of the Catlins comes together in one location, making it a guaranteed highlight of your trip. Here impressive sea cliffs divide the water into two bays, Curio Bay on the southern side and Porpoise Bay to the north.

On the beach, in Curio Bay, you can still see some of the remains of a petrified forest, but what’s much more interesting is that this is the best spot in the country to see Yellow-eyed penguins, even better than the previously mentioned Roaring Bay. On most days around dusk, the penguins hop out of the water after their day of hunting and standstill on the rocks for a while to dry up before they head to their nests.

Porpoise Bay has some great surf, but possibly even more awesome is what lives in the water. Here you can see and even swim with the super playful Hector’s dolphins, the smallest and rarest dolphins in the world. Pods of Hector’s dolphin often feed in the bay and play in the waves. If you go in the water, chances are pretty high that they’ll come to play around you. We went in with paddleboards and within minutes we had half a dozen Hector’s dolphins coming to say hi and playing around us.

Remember that dolphins are wild animals. You shouldn’t directly approach them as disturbing them can cause them to get stressed and flee from their feeding area. If the dolphins are interested and want to play, they will come to you. If you take the time to visit Slope Point, you might as well check out nearby Waipapa Point. Apart from a pretty lighthouse, Waipapa Point is home to a lot of sea lions. They often hide in the long beach grass or in between the rocks so they are hard to spot, and Zi had a huge scare when she almost stepped on one and it rose up and barked at her. Since there are quite a few sea lions here, they also often get each other in each other’s way and start fighting. You don’t want to be caught in the middle when this happens, but from a safe distance, it is a very spectacular show.

So, did we convince you? We wholeheartedly believe that The Catlins is a truly awesome region for anyone who loves unspoiled nature and unique wildlife and that once you’ve been there you’ll start recommending it to everyone as well!

When you decide to venture into the Catlins, make sure that you’re either in a campervan or bring a tent as there are plenty of places to camp, but not many accommodation options.