Eating raw herring in Amsterdam is about as Dutch as it gets, bar wearing clogs at the same time and downing a Heineken afterwards.

To some it may sound gross and disgusting, while to others it will sound delicious, especially if you like sashimi (raw fish in Japan).

I love sashimi and sushi so for me it’s a no-brainer that it’s good for my taste buds. I’ve had it a few times over the years, and whenever I visit Amsterdam I always go back to the same haringhandel (herring stall) at the Albert Cuyp Market.

This has been a family run stall since 1916 and many tourists, as well as locals, stop by and devour some of the raw fish. In the Netherlands people have been eating this for centuries.

Eating the Raw Herring in Amsterdam

You can either have the raw herring by itself, or with onions and pickles. I took the latter just to show you.

Handing over the fish.

The fish is cut into chunks to make it easier to eat. I couldn’t help but get a photo with some clogs in the background for that full on Dutch effect.

Some of you might not be getting thrilled at the prospect of eating this.

Does that look tasty to you? 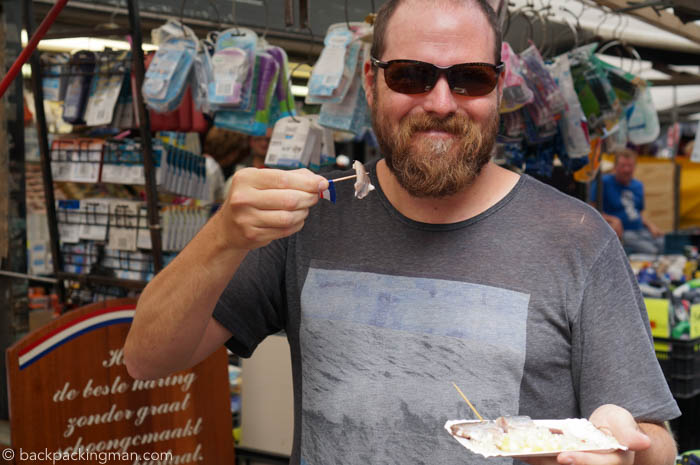 Like I said if you don’t like fish this will gross you out even if it wasn’t raw.

However if you like fish but are not sure about eating it raw then give it a go, you may be surprised.

The traditional Dutch way to eat raw herring is by holding your head back and letting it slip down your throat while you bite at it. Nom nom nom.

You eat the fish first with a few onions on and then the pickle afterwards.

I personally prefer having no onions as it takes away the taste of the fish, but like a pickle afterwards to reset the taste buds.

The raw herring in Amsterdam, or the Netherlands for that matter, is a snack and not a main meal.

You can find these small haringhandel stalls all over the place as the Dutch love them.

Tourists came and went while I hanged around the stall, as they thought over whether they should give it a go.

One woman was seriously trying to come up with an excuse to her husband on why she shouldn’t eat it.

She failed and tried a piece, and the facial expression was priceless. I only wished I had gotten a photo of the reaction.

Other tourists showed up and munched away enjoying it.

If you ever go to Amsterdam then be sure to have a taste.

Look at it as a cultural experience.

I left satisfied and happy that I get to share with you foods from around the world, and maybe inspire you to give them a try.

But this was something I enjoyed, unlike eating rotten shark in Iceland which was one of the most disgusting things ever.

I will be back for more!