The best things to do in Lagos take full advantage of the town’s idyllic seaside setting on the southwestern coast of Portugal. The Atlantic Ocean skirts rugged limestone cliffs, red earth meets golden beaches and fertile hills prove ideal for producing excellent wine. Whitewashed buildings are contrasted by ornately detailed azulejos around every cobbled lane and ancient fortifications capture an air of living in another time.

Lagos has a relaxed atmosphere with just enough nightlife to keep you occupied but a more subdued offering than nearby Albufeira. Spend your days exploring towering sea stacks as you paddle along the coastline in kayaks or stay onshore to relax on the saffron sands of the many beaches and coves nearby. Find all that Lagos is most famous for, below.

Wander the streets within the former city walls 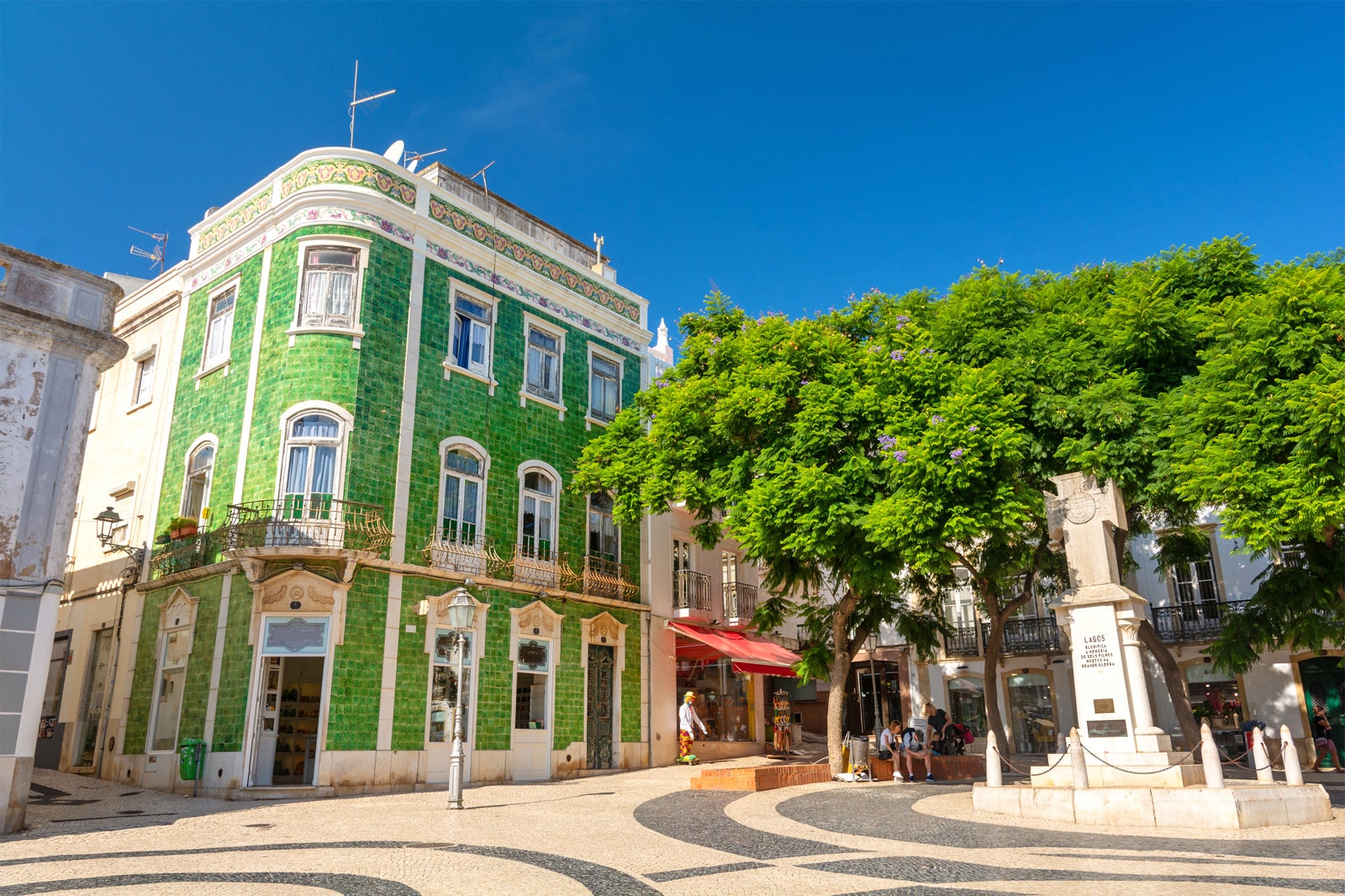 Old Lagos’ warren of cobbled laneways and whitewashed buildings is contained within the partial remains of the 16th-century city walls. Churches open onto sun-soaked squares and intricately decorated azulejos adorn street corners. There’s no shortage of charm throughout the Old Town of Lagos.

Compact enough to see everything in an afternoon, Old Lagos is brimming with historical significance. Wander the streets to discover Forte da Ponta da Bandeira, the site that once guarded the entrance of the Lagos estuary. Opposite, you’ll find Saint Gonçalo’s gate, the best-preserved section of the city walls. Delve into the city’s dark history at Mercado de Escravos, which was the first s.l.a.v.e market in Europe, before walking to Jardim da Constituição by the water. 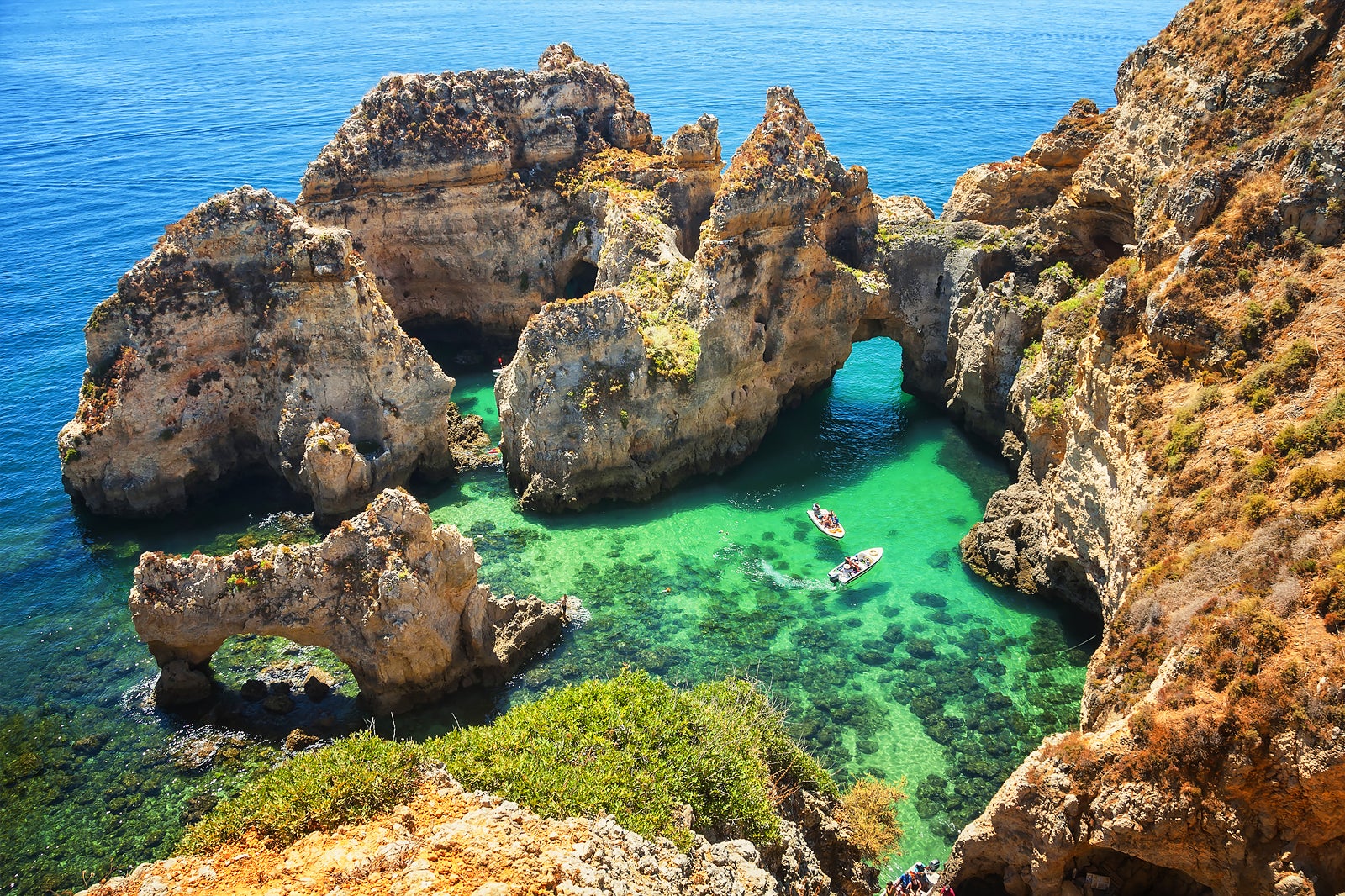 Ponta da Piedade offers perhaps the most iconic vista of the Algarve. The dramatic headland is where the Atlantic Ocean is punctuated by limestone sea stacks. Over centuries, wind and water have carved their way through the cliffs along Portugal’s southern coast to create a network of caves and tunnels that make this locale a wonder of nature.

A short walk west of Lagos, ochre cliffs plunge directly into the ocean and the region takes on a sort of supernatural beauty at sunset. The sun’s rays strike almost parallel to the ocean and are best enjoyed from the bay by boat or on one of the cliffs overlooking the steep staircase that delivers you to the foot of the bay below.

For a dose of culture on the Algarve 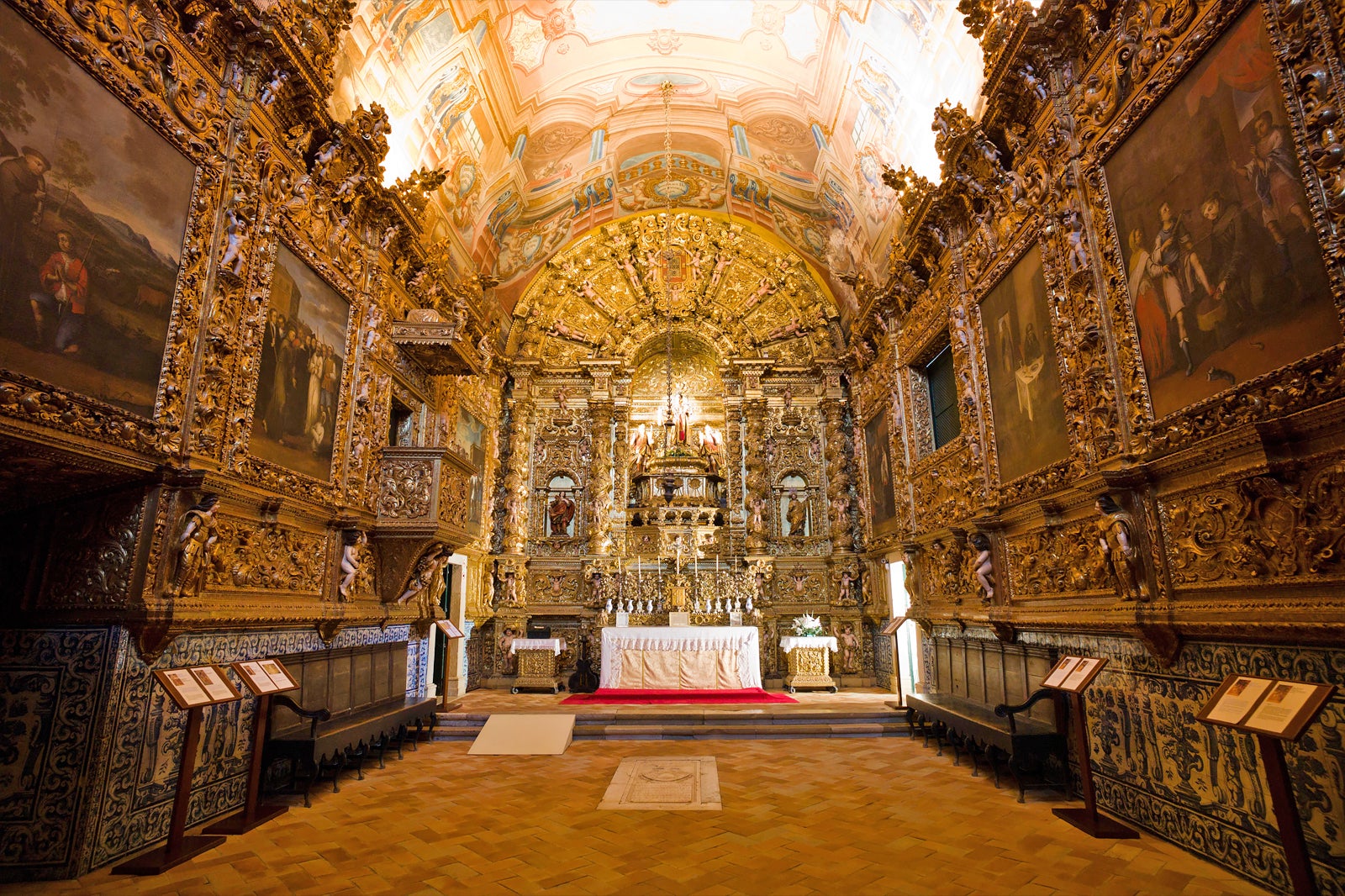 Igreja de Santo António (Santo Antonio Church) is listed as a Portuguese National Monument, with whitewashed exteriors that appear rather unassuming at first glance. Even so, stepping inside will reveal an impressive interior to rival the most renowned religious institutions across Europe. The Baroque gilded woodwork is a work of art complemented by ceiling frescoes and traditional azulejos.

The theme of the artwork inside depicts the life of St Anthony, offering explanations for visitors in both Portuguese and English. Returning outside, 2 bell towers are the most alluring element of its modest exterior. Previously owned by the military, the church now only holds 1 service annually to celebrate its Patron Saint in June.

Explore the rugged coastline by sea 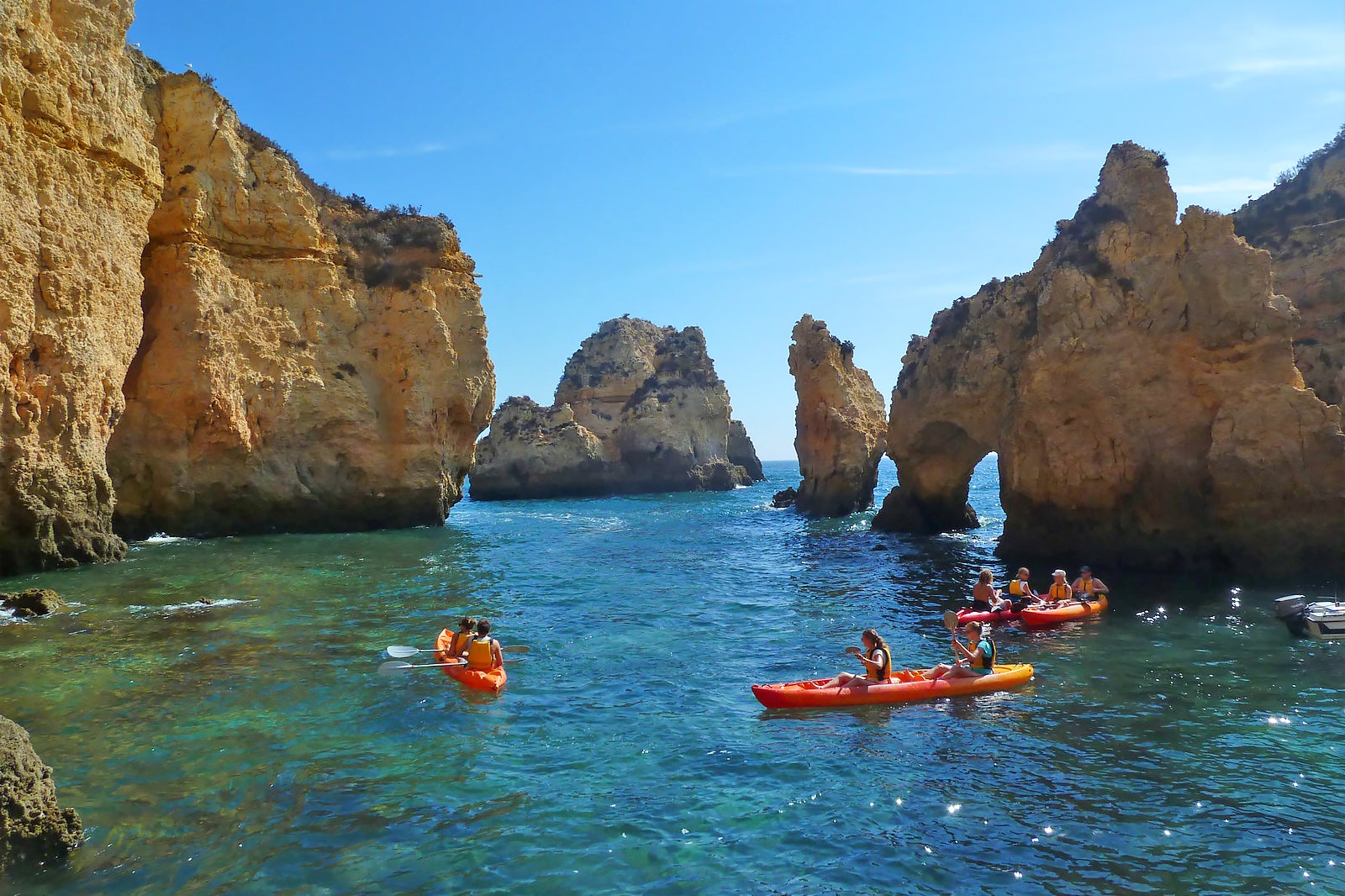 Navigating the Algarve coastline along Lagos by kayak is one of the best ways to explore the rugged cliffs that are so iconic of the region. The southwestern tip of Europe is home to fascinating seascapes that are ideally suited for exploring from the water, giving the best views of the red and yellow-tinged limestone escarpments where they meet bottle-green seas.

Weave your way through caves and tunnels that have been etched into the coastline by water and wind over millennia. Glide across the emerald waters of the Atlantic Ocean as the cliffs tower above and get familiar with the intricacies of the unique sea stacks that rise like nature’s skyscrapers from the sea. With stops in coves and bays nestled within sheer cliffs, an on-water discovery is one of the most idyllic ways to uncover Lagos’ coast.

Experience the freshest catches of the day 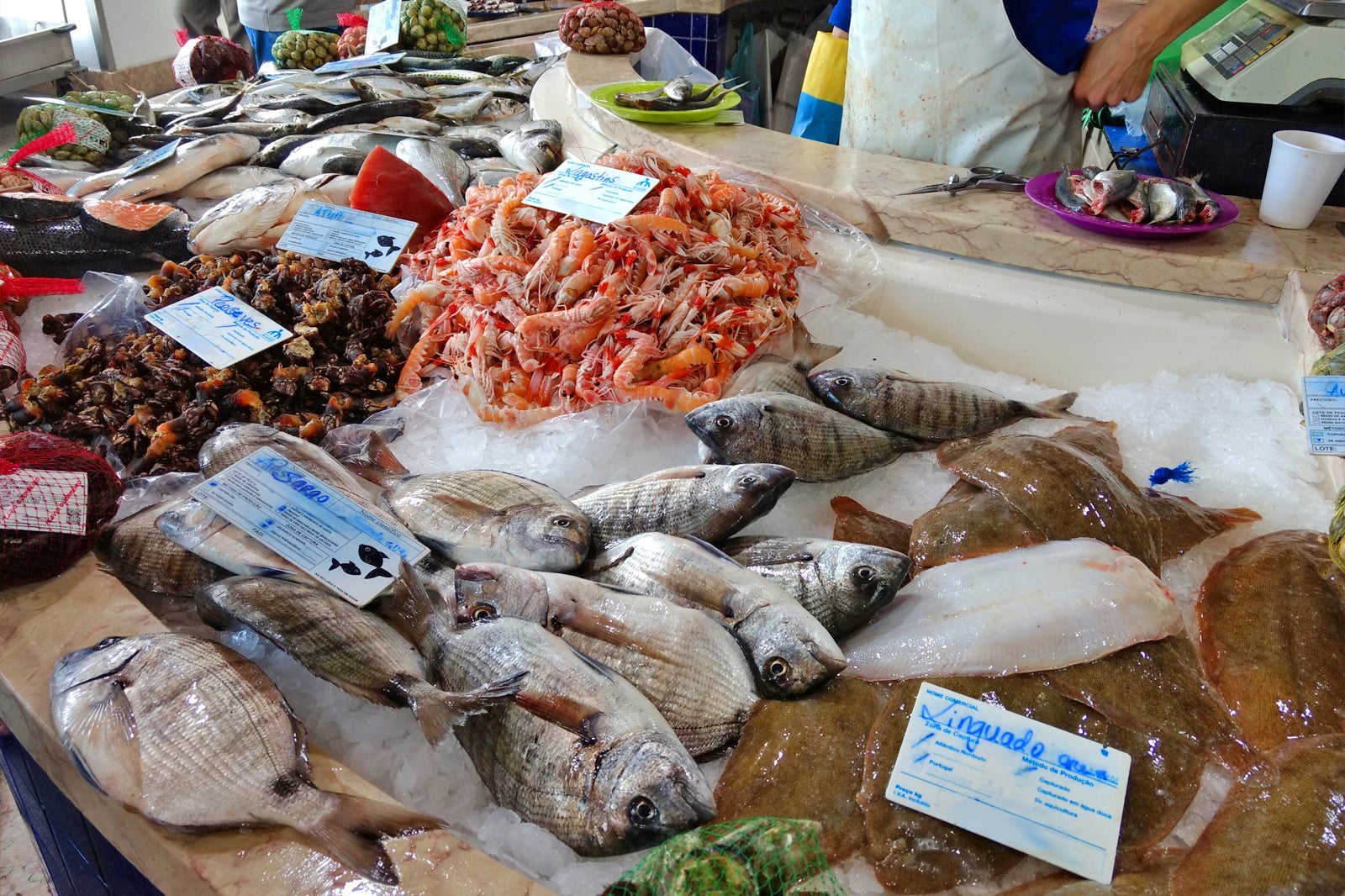 Lagos Municipal Market, or Mercado Municipal de Lagos to locals, is where you can pick up the freshest catches of the day from local fishermen. Early risers will love the opportunity to head out to the market. Set over 3 floors, more than 30 vendors offer a wide variety of fish and fresh seafood, as well as a few others selling fresh produce including fruit and vegetables. There are also several butcher’s stores on site.

Situated opposite the Lagos marina, this is where the locals like to shop. Follow suit with the Portuguese and arrive between 6am and 7am to pick up the best of the day’s catch. If you would prefer to enjoy sampling the finest local food, head upstairs to the 2nd floor to enjoy a meal at the restaurant with stunning harbour views.

Open: Daily from 7 am to 2 pm (closed on Sundays, no fish sold on Mondays)

From land or the sea, try to see these beautiful animals 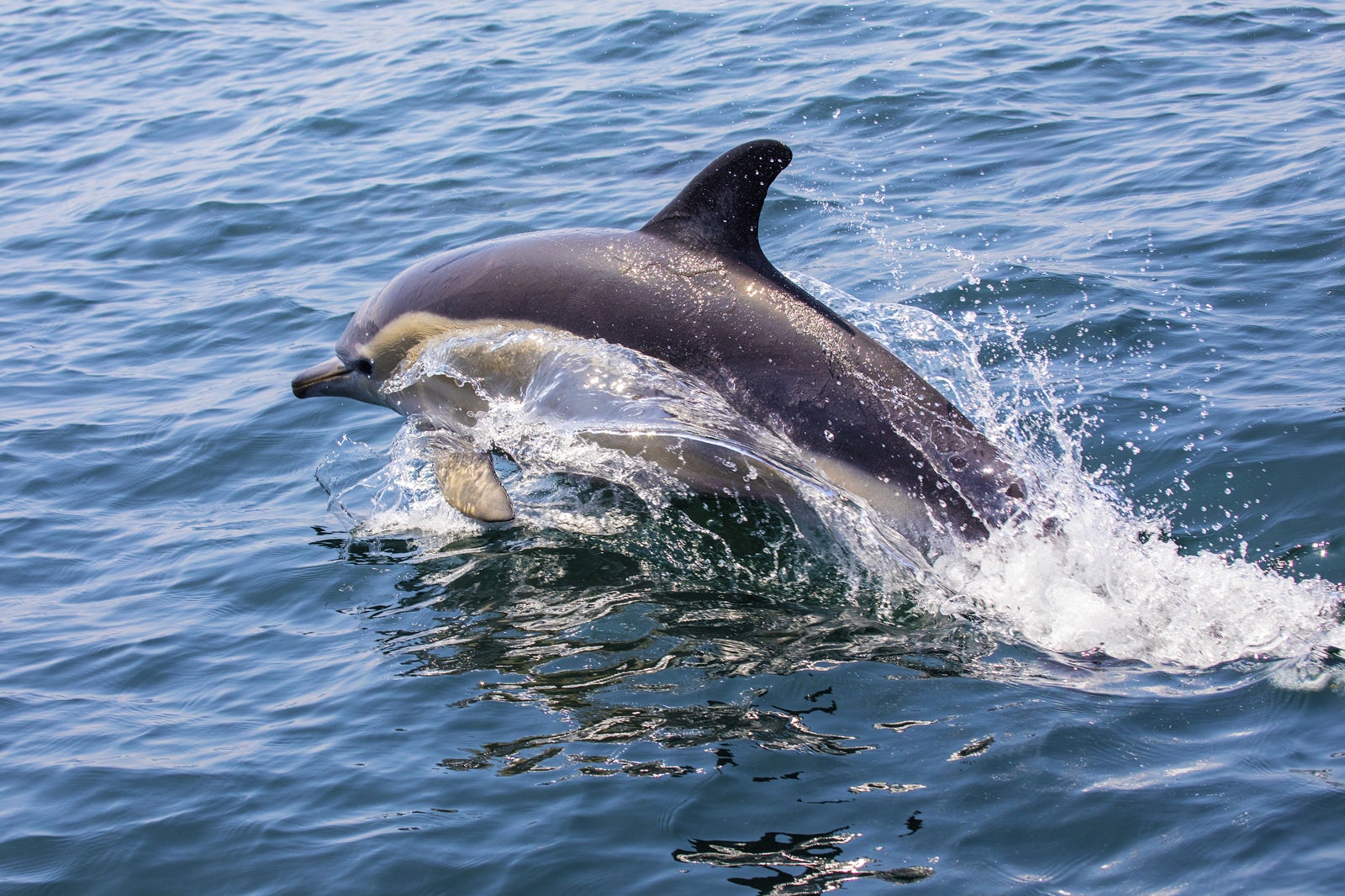 The effort of spotting the dolphins in Lagos is worth every moment as you watch these beautiful beings as they dip and dive through the surf in pods. One of the ocean’s most-loved and playful animals, dolphins enjoy frolicking in the Atlantic waters off the coast of Lagos. And, with the opportunity to see them from March through November, you can take advantage of the long season by taking more trips.

The best way to chance an encounter with dolphins in Lagos is by joining an ethical dolphin spotting tour on a small boat. If you’d prefer to keep your feet planted on the ground then opt to try sighting them from one of the headlands overlooking the sea.

Cool off at one of the region’s best coves 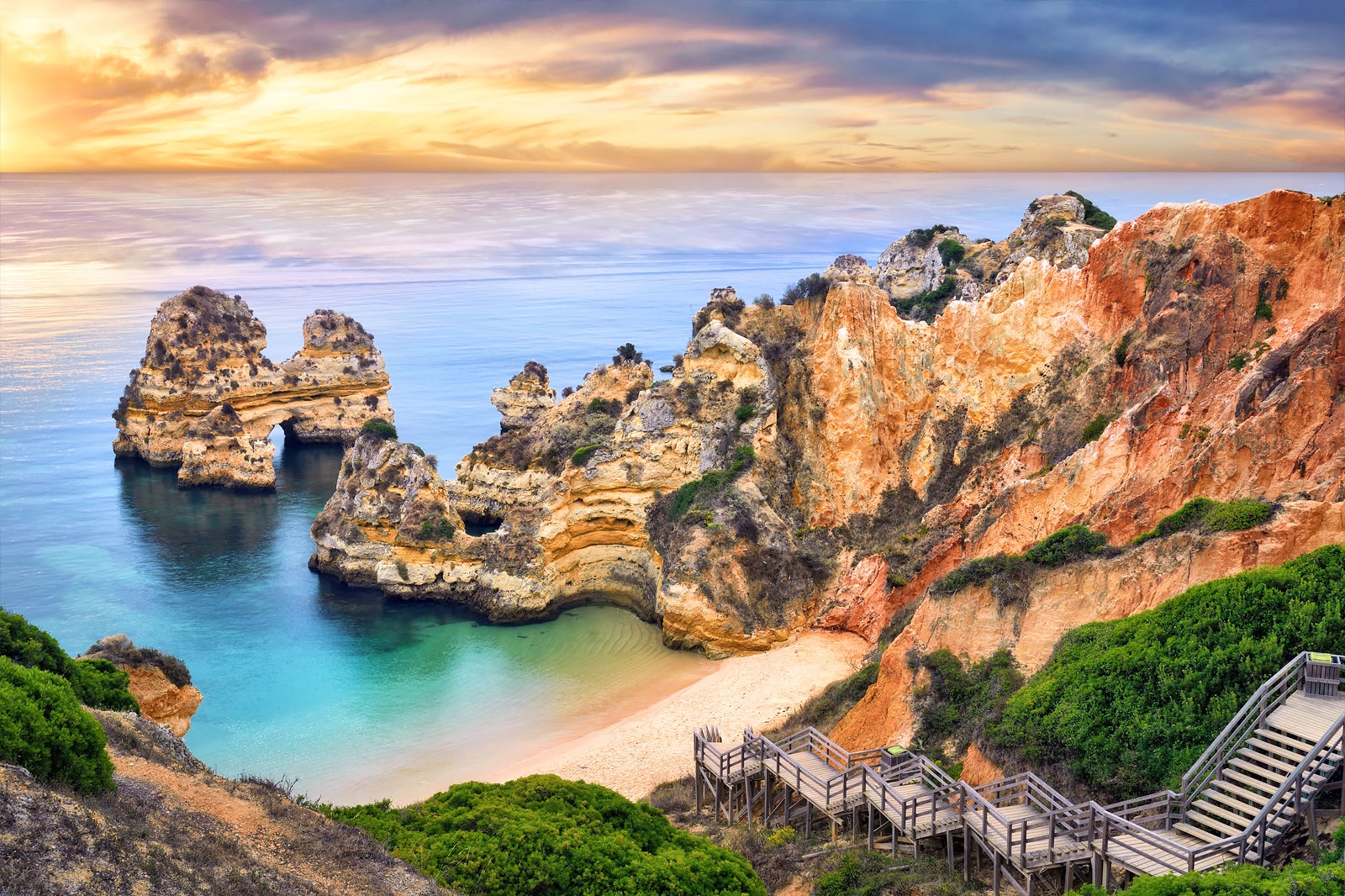 Camilo Beach (Praia do Camilo to locals) is one of the finest places to enjoy the splendours of the Algarve coast. The beach offers panoramic views over the coastline that stretches between Lagos and Albufeira. A wooden staircase leads to a sandy cove at the bottom of truncating cliffs in a sheltered bay with calm waters.

When the tide is low you can walk out to the caves in the bay, walk through the natural tunnel that connects Praia do Camilo to the neighbouring bay or swim around and enjoy a refreshing dip in the Atlantic. During the peak season, the small bay can fill quickly, so arriving early is the best way to get a good spot. Hang around for sunset and you’ll be rewarded with beautiful colours as the lingering light casts a warm glow over the cove.

Learn to surf at one of Europe’s best surfing spots 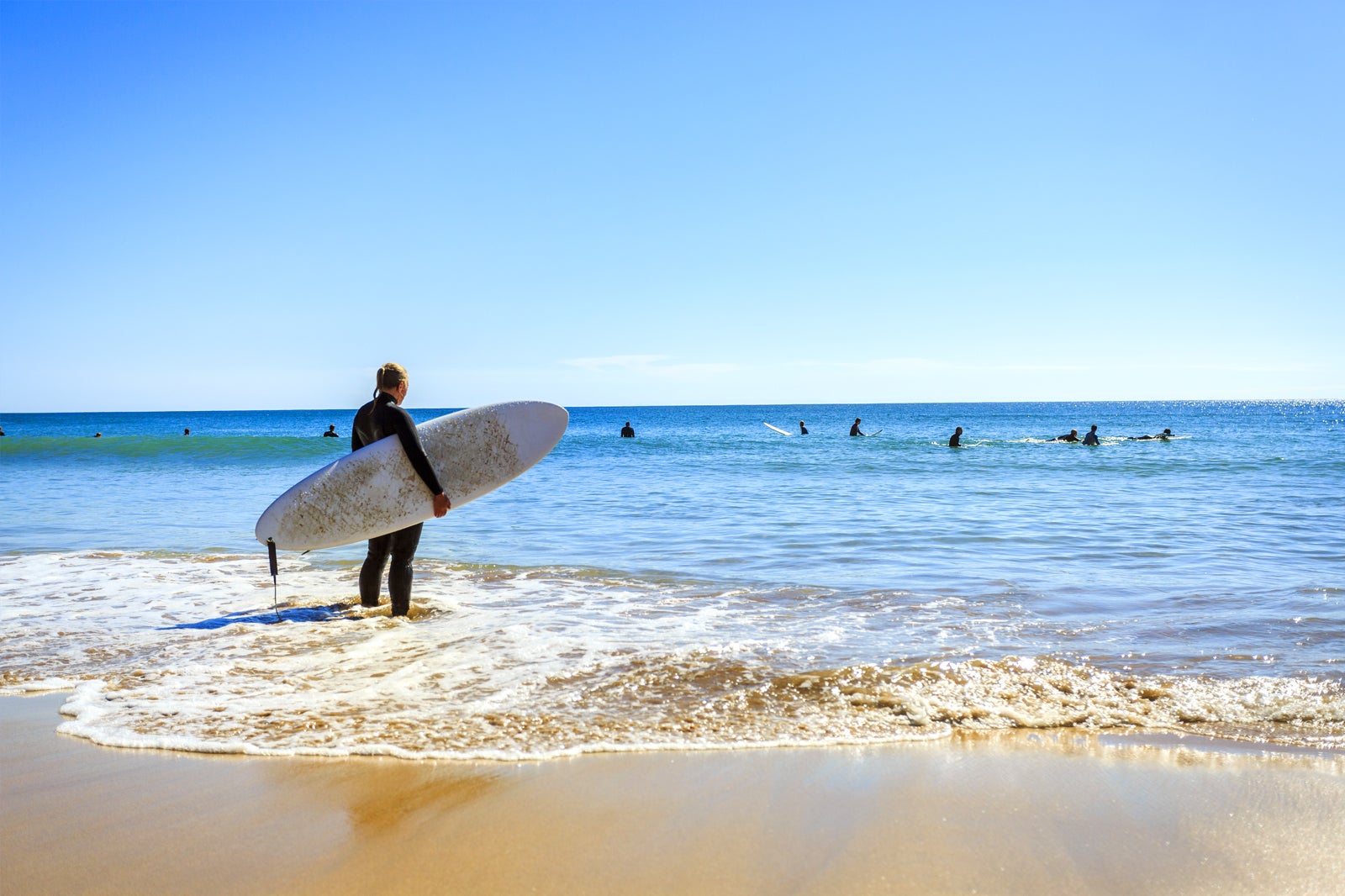 Surfing in Lagos would be high on the list of many as a trip here wouldn’t be complete without catching a few waves. 30 minutes’ drive west of Lagos, you’ll uncover one of the best places to surf on the Algarve. Considered a bit of a surfing mecca by those in the know, beaches both on the south and west of the point at Sagres provide ample opportunity to take advantage of the swell of the Atlantic.

There’s a variety of beaches offering differing levels of difficulty around Sagres. Those looking for a gnarly swell will favour Praia do Beliche which boasts some of the most challenging breaks. Or head to Praia do Tonel for consistent conditions – especially good if you’re short on time. If you’d prefer to catch the waves closer to Lagos, head to Praia da Luz, located just a 15-minute drive from town.

Enjoy the Portuguese take on tapas 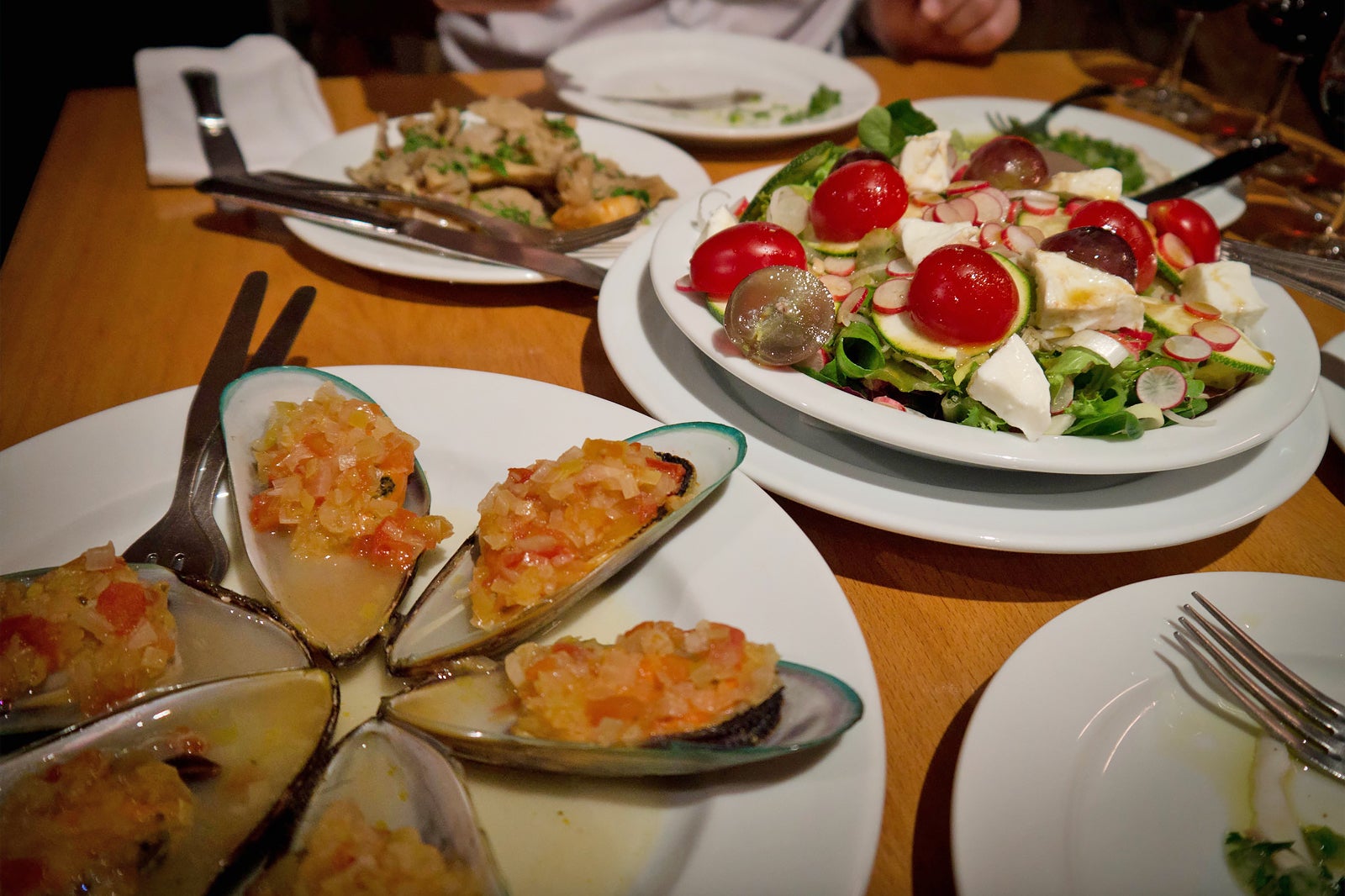 Many of us are familiar with the Spanish pastime of enjoying tapas with friends, but Portugal has its own take on the art of small, bite-sized servings. Despite its humble entrance, Casinha do Petisco in Lagos is one of the best places to sample this Portuguese favourite. Grilled seafood and shellfish fill the menu, drawing on traditional flavours to excite your taste buds.

If you’re in the Algarve in October, Rota do Petisco is a tapas-style food festival running annually. Participating eateries offer a single dish they think you’ll love with a glass of wine for a wallet-friendly fare. To join in the festivities, you simply purchase a ‘passport’ for a small fee and eat your way through several venues in an evening to sample the best of each. 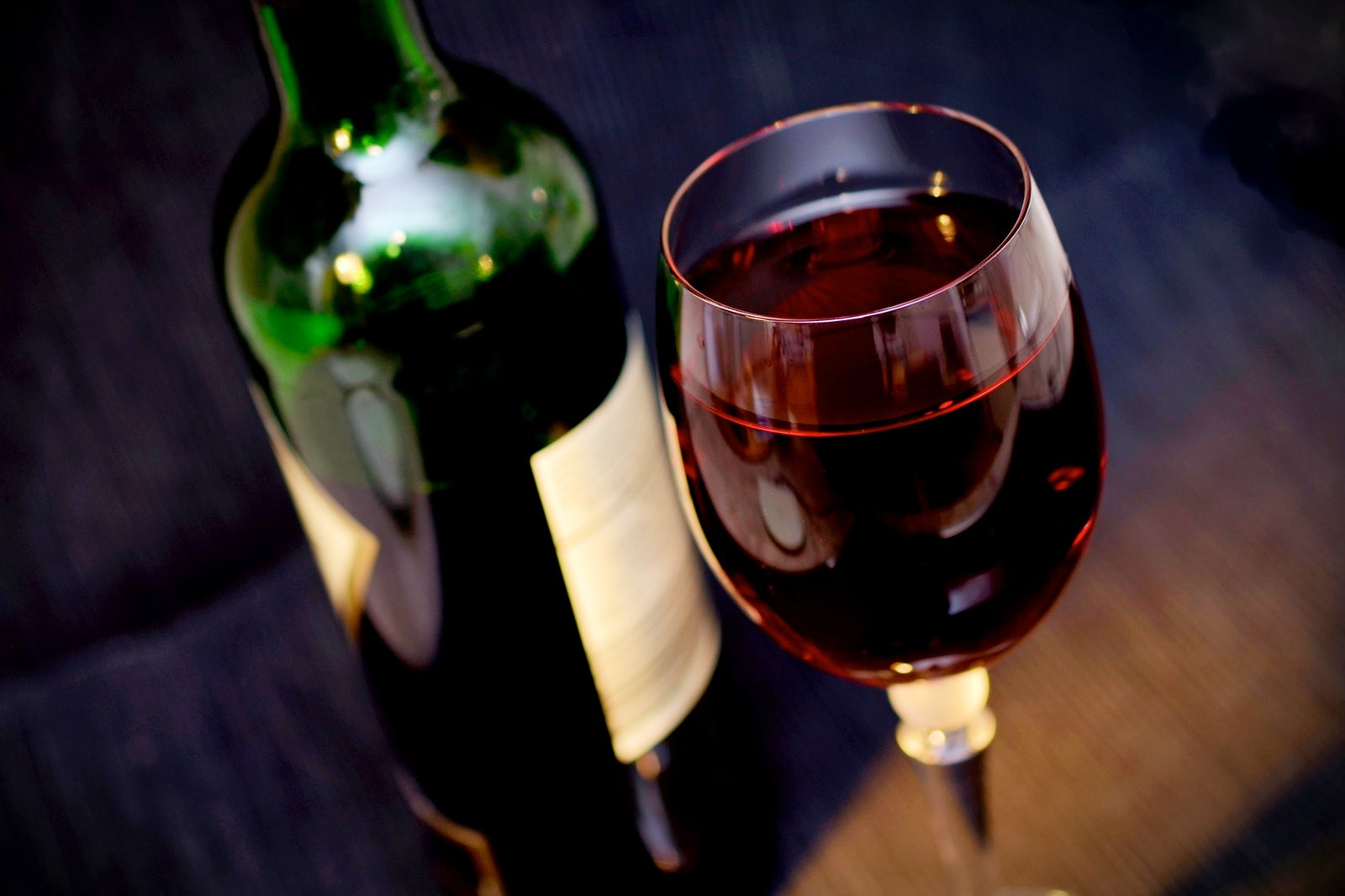 Away from its famous coastline, the Algarve offers bountiful countryside where you’ll discover more than 2,000 vineyards. In a drier-than-usual climate for wine production, these vineyards thrive in the fertile soil.

Head to the hills to explore the flavours and aromas of the wine while infusing your experience with the sense of tradition and culture in the production process. Take a tour of one of the vineyards or hire a car to explore the Algarve’s wine route that stretches through the hilly countryside running west to east.

What is Portugal Known For: Things You Didn’t Realise Portugal Gave The World