Walter Gretzky, the ultimate Canadian hockey dad who taught and nurtured the Great One, has died. He was 82.

The father of Wayne Gretzky became a name himself, a constant in Wayne’s world. As Wayne’s star ascended, Walter remained a blue-collar symbol of a devoted hockey parent in a country filled with them. “It’s with deep sadness that Janet and I share the news of the passing of my dad,” said Wayne. “He bravely battled Parkinson’s and other health issues these last few years, but he never let it get him down.

The two were also often intertwined, their father-son story used in commercials from Tim Hortons to Coca-Cola. And following in the footsteps of Alexander Graham Bell, they made Brantford, Ont., famous.

Walter was celebrated for far more than just fathering a superstar, however. His down-to-earth, no-airs approach to life and devotion to his family struck a chord with Canadians.

“Sometimes, I swear to you, I have to pinch myself to make sure I’m not dreaming,” Walter wrote in his 2001 autobiography “Walter Gretzky. On Family, Hockey and Healing.”

Walter’s celebrity status increased after making a remarkable recovery from a stroke suffered in 1991. His autobiography and a 2005 made-for-TV movie told the story.

Walter Gretzky was the son of immigrants — a Polish mother and Russian father — who started a vegetable farm in 1932 in Canning, Ont., just outside Brantford, on the Nith River, where Wayne learned to skate when he was two. They bought it for $600.

#WalterGretzky, the ultimate Canadian hockey dad who taught and nurtured the Great One, has died. He was 82.
Walter’s father Tony, whose parents had emigrated to the U.S., came to Canada from Chicago to enlist during the First World War with his name switching to Gretzky from Gretsky because he did not know how to write in English. Walter’s mother Mary came to Canada by herself in 1921 as an 18-year-old.

Walter’s parents met in Toronto in the 1930s. He was the fifth of seven children.

He played minor hockey in Paris, Ont., then junior B for four years in Woodstock. He went on to play some senior hockey but said he wasn’t good enough to play pro.

Walter met Phyllis, his wife to be, at a wiener roast at the family farm. She was 15 at the time. Three years later, they got married.

Wayne was the first born in 1961, followed by Kim, Keith, Glen and Brent. Keith and Brent also played professional hockey.

The same year as Wayne was born, Walter fractured his skull in a work accident as a Bell lineman. He spent some time in a coma and was off work for 18 months. Left deaf in his right ear, he was eventually transferred to another Bell department and became an installer/repairman.

The winter when Wayne was four, his father turned the backyard of their Brantford home into a rink which young Wayne called The Wally Coliseum. From the time he was a tot, Wayne wanted to do nothing but play hockey.

Walter decided to make his own rink to avoid having to freeze standing outdoors at some outdoor rink elsewhere — or sit in his car with the engine running to get some heat — while Wayne skated. Gas was too expensive, he said. 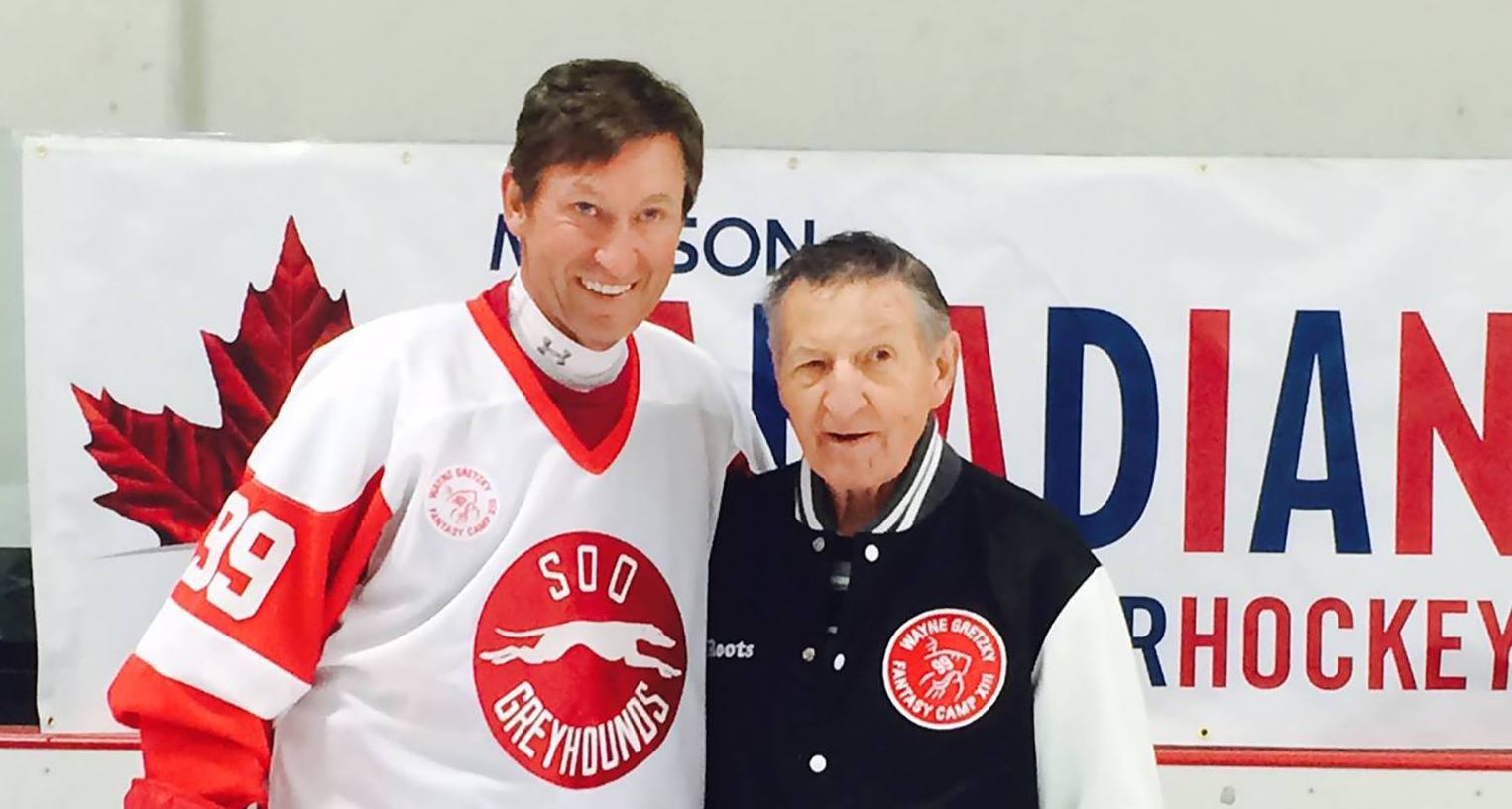 “It truly, truly was self-preservation,” he explained.

Walter fed his eldest child’s obsession, recruiting bigger kids for Wayne to practise against in the backyard rink, and finding him a spot on a team of 10-year-olds when he was six.

“You knew he was good at his age at what he was doing,” Walter said in a 2016 interview. “But to say that one day he’d do what he did, you couldn’t say that. Nobody could.”

Wayne recalled crying after that first year of organized hockey when he didn’t get a trophy at the year-end banquet.

“Wayne, keep practising and one day you’re gonna have so many trophies we’re not going to have room for them all,” his dad said.

After a bad game when he was 11, Wayne got a chewing out from his dad: “People are going to judge you on how you perform every night. Never forget that.”

The NHL star recalls getting a similar earful when he was 21, during the 1983 Stanley Cup playoffs.

“I don’t know where I’d be without him, but I know it wouldn’t be in the NHL,” Wayne said in his autobiography.

“I just think I told him to play good,” said Walter.

At times, hockey got in the way. Walter recalled missing the 1972 birth of Brent, their youngest, because Wayne was playing at a big minor tournament south of the border.

“Phyllis remembers that when I walked into her room in the maternity ward, the first thing I said to her was ‘We won, we won!'” he wrote. “She looked at me like I was crazy and said ‘It’s a boy, Walter.’ I guess I have to admit that sometimes I took my devotion as a hockey dad a little too far!

“But of course, I welcomed my brand new son with open arms — another budding hockey player, after all.”

Walter drove one old blue Chevy station wagon after another — calling each the Blue Goose — until it clocked about 200,000 kilometres or fell apart. He called it a “reliable car for a family of seven.”

Wayne bought his father a blue Cadillac for his parents’ 25th wedding anniversary.

“My hero as a kid was a man with constant headaches, ulcers and ringing in his ears,” Wayne wrote. “He stays in the same house driving the same car — teaching kids the same way he always has, believing in the same things he always had. “On Family, Hockey and Healing” was reproduced in paperback when the movie came out. In the introduction, Walter answered a question: What’s it like being Wayne Gretzky’s dad?

‘”I say that mostly it’s been fantastic beyond my wildest dreams,’” he wrote. ‘”It’s given me the chance to travel widely, meet amazing people and do things that I never would have had the opportunity to do otherwise.

“‘I love to tell stories, and believe me, these experiences have given me some good ones! It’s all been a great adventure, and I’ve been happy to share it with my family and friends.” 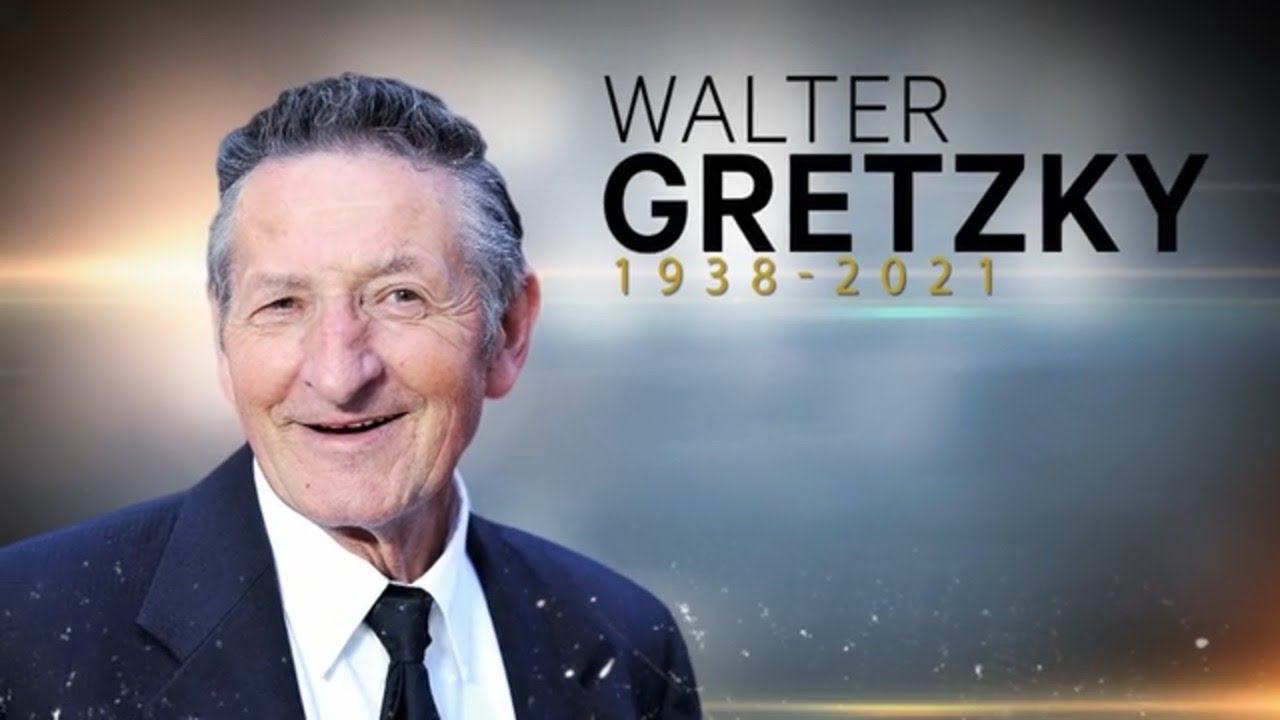 But he said there was another side.

“It’s a privilege but also a responsibility that has to be handled carefully,” he wrote. “Living so close to the spotlight, you can be a magnet for some pretty strange things, and we’ve certainly seen it all: the good, the bad and the ugly,” he wrote.

That was demonstrated in 2020 after some of Wayne’s memorabilia was stolen from his father’s home, which was packed with souvenirs and other mementoes.

Police eventually recovered several items including game-used sticks, hockey gloves, pants, jerseys and the NHL’s Player of the Year award from the 1983-84 season. The estimated value of the recovered property was believed more than US$500,000.

Arrests were made in the case.

Walter travelled afar, including Europe, to watch his sons play hockey, and was a regular visitor to Phoenix after Wayne took over as head coach of the Coyotes in 2005.

He recalled being on a bullet train during the 1998 Nagano Olympics. In a good mood, he stated dancing around the car singing “When Irish Eyes are Smiling.” When he took off his cap at the behest of a friend, a Japanese woman put some money in it.

And while being Wayne’s father opened doors, he stayed true to himself.

In Paris to see a horse owned by Wayne and Bruce McNall run, he and a longtime friend, Charlie Henry, were stunned by the huge rooms they were booked into at the Ritz-Carlton. The two opted to stay in one room, cancelling the other.

He was a much sought-after speaker by groups organizing sports awards dinners, and he worked tirelessly as national spokesman for the Heart and Stroke Foundation of Canada. He was named to the Order of Canada in 2007.

In 2010, Walter carried the Olympic torch on the last day of the Olympic relay in the leadup to the opening ceremonies in Vancouver, where Wayne lit the Olympic flame.

He was 53 when he suffered his stroke, just a few months into retirement after 34 years at Bell. He wasn’t expected to live through the night. But he did, and it changed his life.

He lost much of his memory and it took time to get snippets of it back.

“Those were dark times,” he wrote about the early days after the stroke, “and I wouldn’t want to go back there for anything in the world. It’s an awful thing not to know who or where you are, to feel confused and hopeless and not know whether you are ever going to be able to do all the things your used to to.”

Hockey helped his recovery as he started working with kids in the Brantford Minor Hockey Association. The four- and five-year-olds used to call him Wally.

In his remaining years, he was more outgoing and carefree. After one game when his minor hockey team was downcast, he invited everyone to his home to see Wayne’s memorabilia. There were 61 of them. He also became an avid golfer.

He’d been a hyper chain-smoker before the stroke. He gave that up, while devoting more of his time to worthwhile causes.

‘”I really don’t like to sit still for too long,” he said. “I’m most comfortable when I’m active.”

5 Hikes You Must Take in Whistler