This South Eastern corner of Austria, bordering Slovenia and Italy, has no coastal access, but instead has a delightful series of lakes, surrounded by mountains, warm in summer and perfect for swimming and sunbathing.

Last year, I walked a selection of this trail but missed out on one of the most beautiful parts in Carinthia. That’s a good enough reason to return to Austria, complete a couple of sections and explore the Lake District.

The Alpe-Adria Trail runs for 750km from the foot of the Grossglockner (at 3,798m Austria’s highest mountain), into Slovenia and ends in Italy, near Trieste on the Adriatic coast.

I fly into Klagenfurt in the early evening and take a taxi transfer to Millstätt. After around an hour, we crest a ridge and suddenly Lake Millstätter See is spread out below me, hemmed in by high mountains with snow still visible on the distant peaks. At over seven miles long, it’s only Carinthia’s second largest, but is the deepest, plunging to 146m. So clean that they say you can drink it, and it’s crammed with freshwater fish. 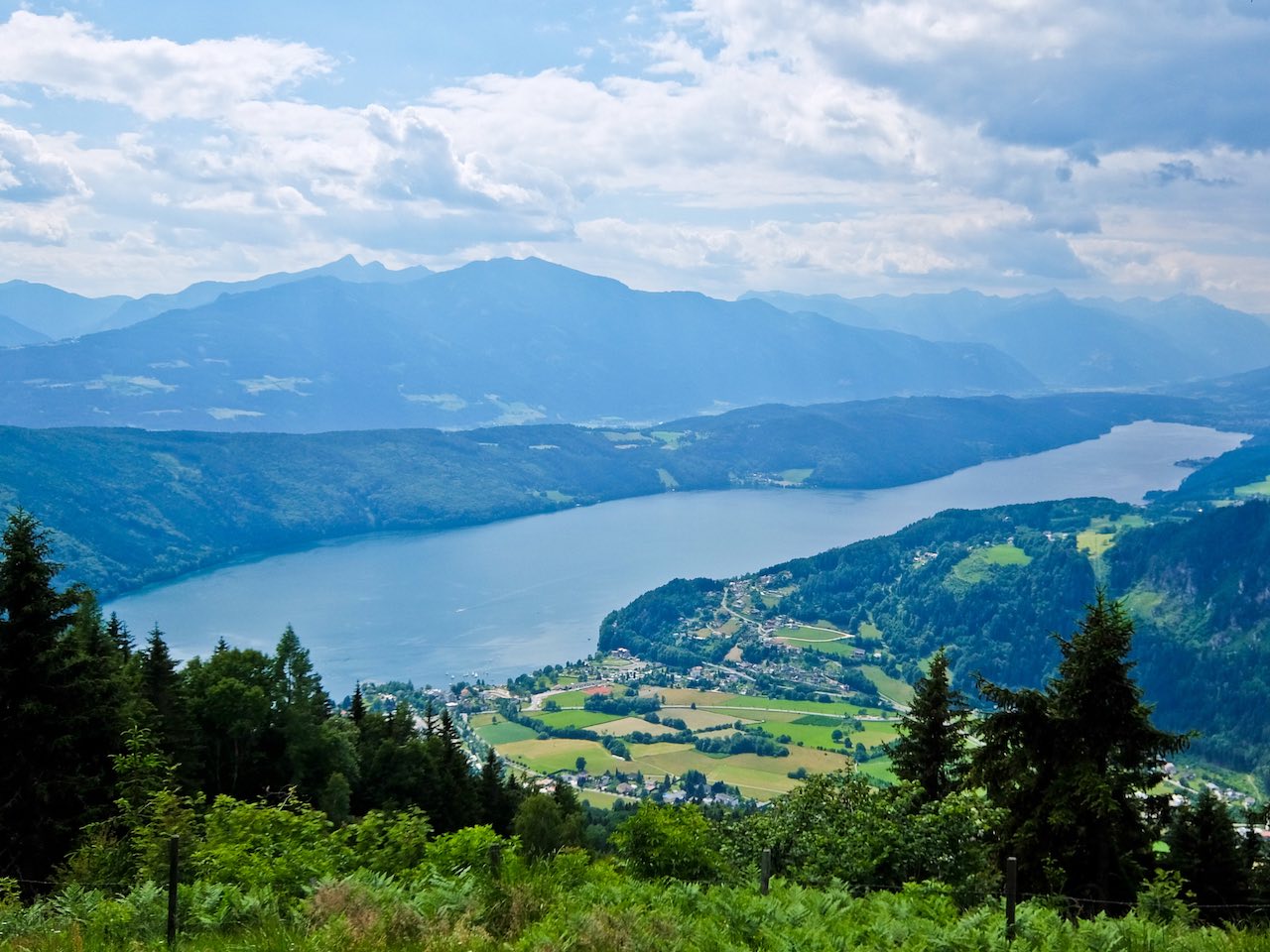 The most famous is the Reinanke, belonging to the salmon family, prosaically known in English as White Fish. It entered the lake at the end of the last ice age from the Arctic sea, and people have been eating it ever since. I

t fed the Benedictine monks in the Millstatt Monastery and in the 19th century the Bacher family were selected to supply the Imperial court in Vienna. Their descendants still have the right to check their nets every morning and bring in the fish for lunch. 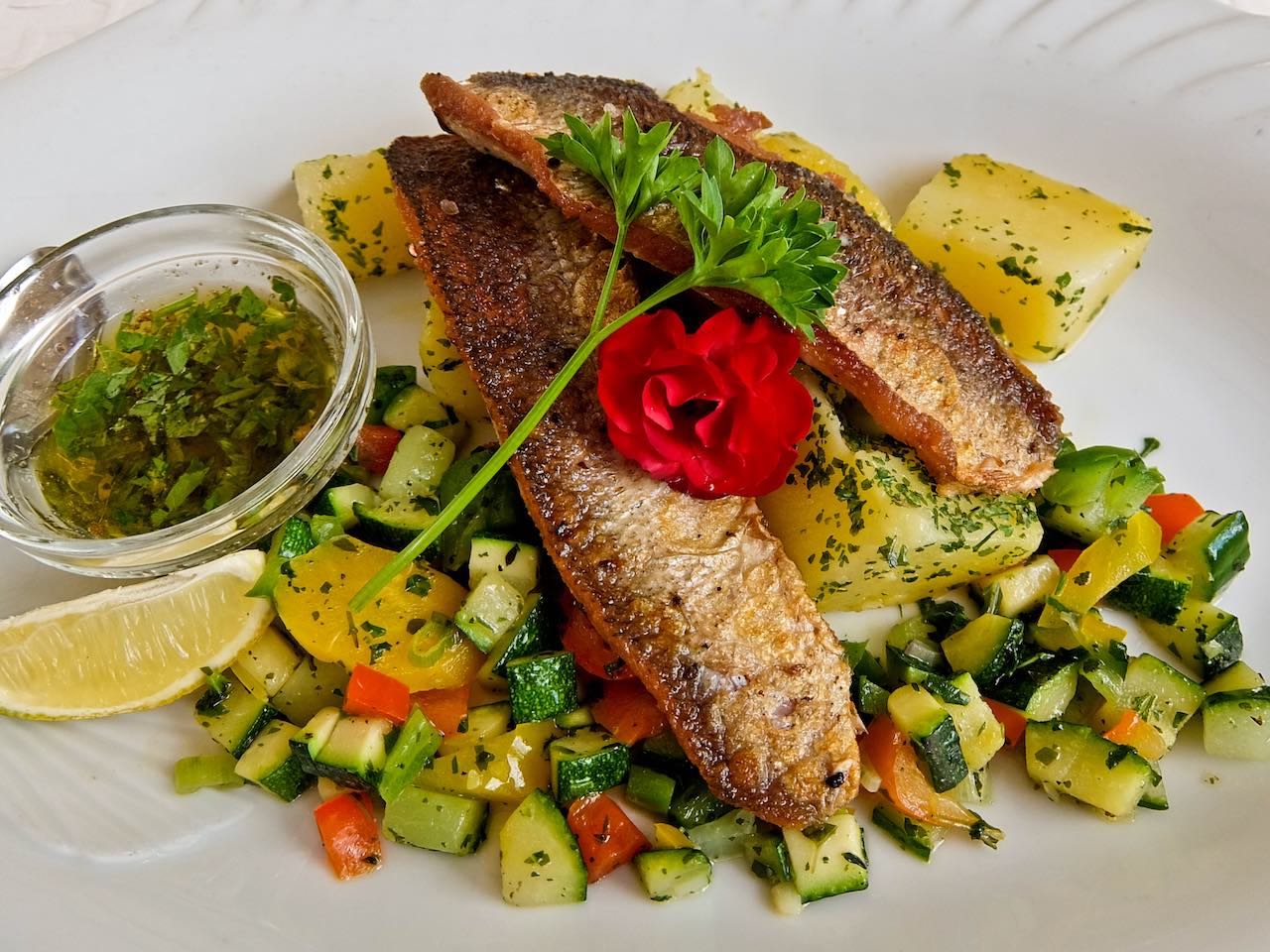 I’m staying right next to lake in the charming Hotel See-Villa, built in 1884, and one of a number of country houses built to cater for aristocrats when they started coming here from Vienna in the 19th century.

The hotel has been in the hands of the Tacoli family for the last 40 years and it shows in the efficient way they run it. The restaurant has tables at the water’s edge, a delightful opportunity to observe the lake in its many moods. It’s surprisingly warm, since no glacial mountain streams drain into it, and temperatures can reach 25°C in summer. I get into the routine of a daily morning and evening dip. 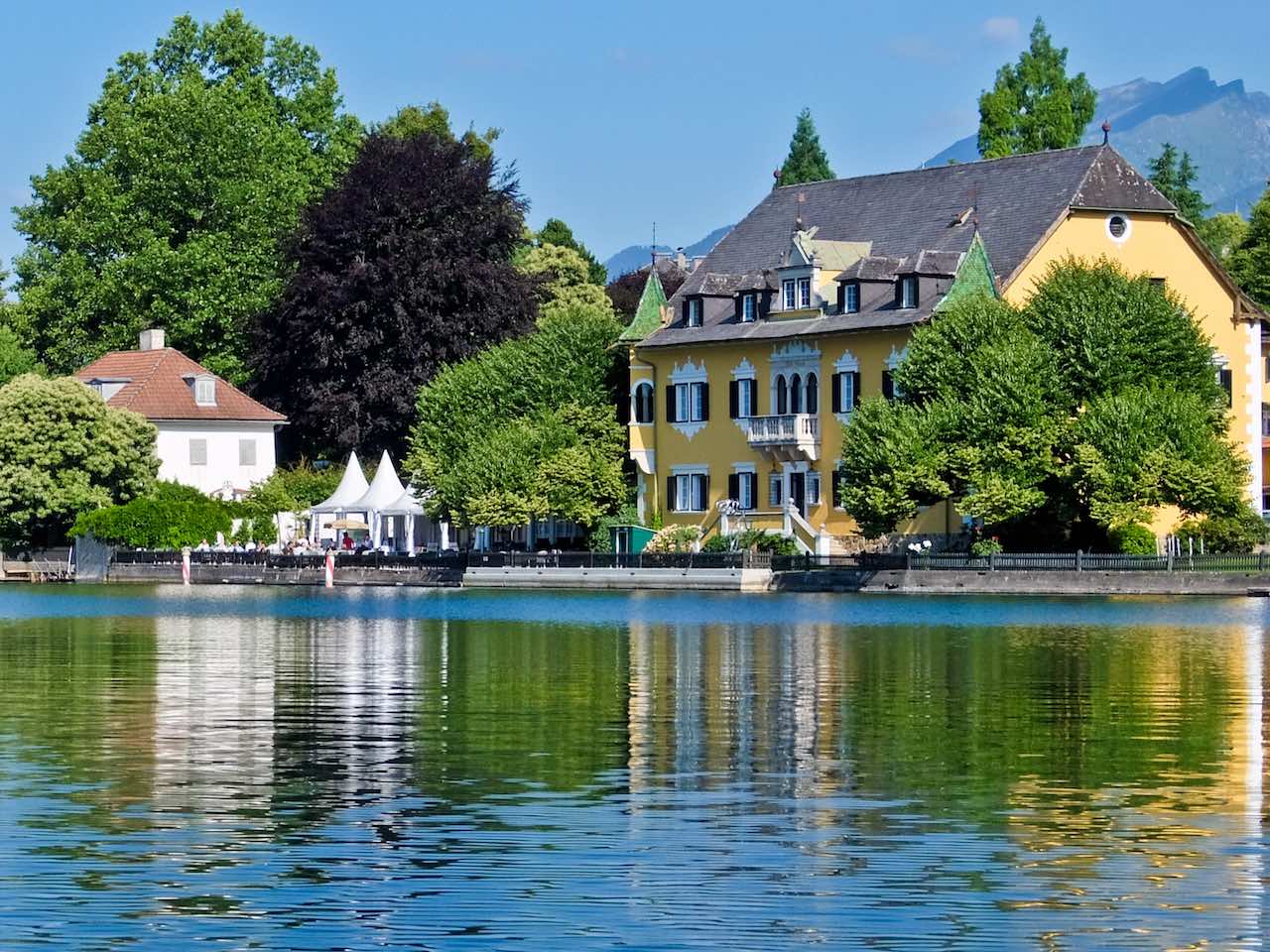 What they’re promoting here is peace and quiet, with the German slogan Zeit zu zweit, although the English Time for Two doesn’t quite have the same ring to it. If you’re a couple, however, a table for two on a pontoon in the middle of the lake, is a romantic option – each course is delivered by boat.

You can also stay in one of seven Biwaks, scattered around the lake, a sort of luxury bivouac in a wooden shed. Inside there’s a large double bed and windows in the roof so you can observe the stars as you drift into sleep. 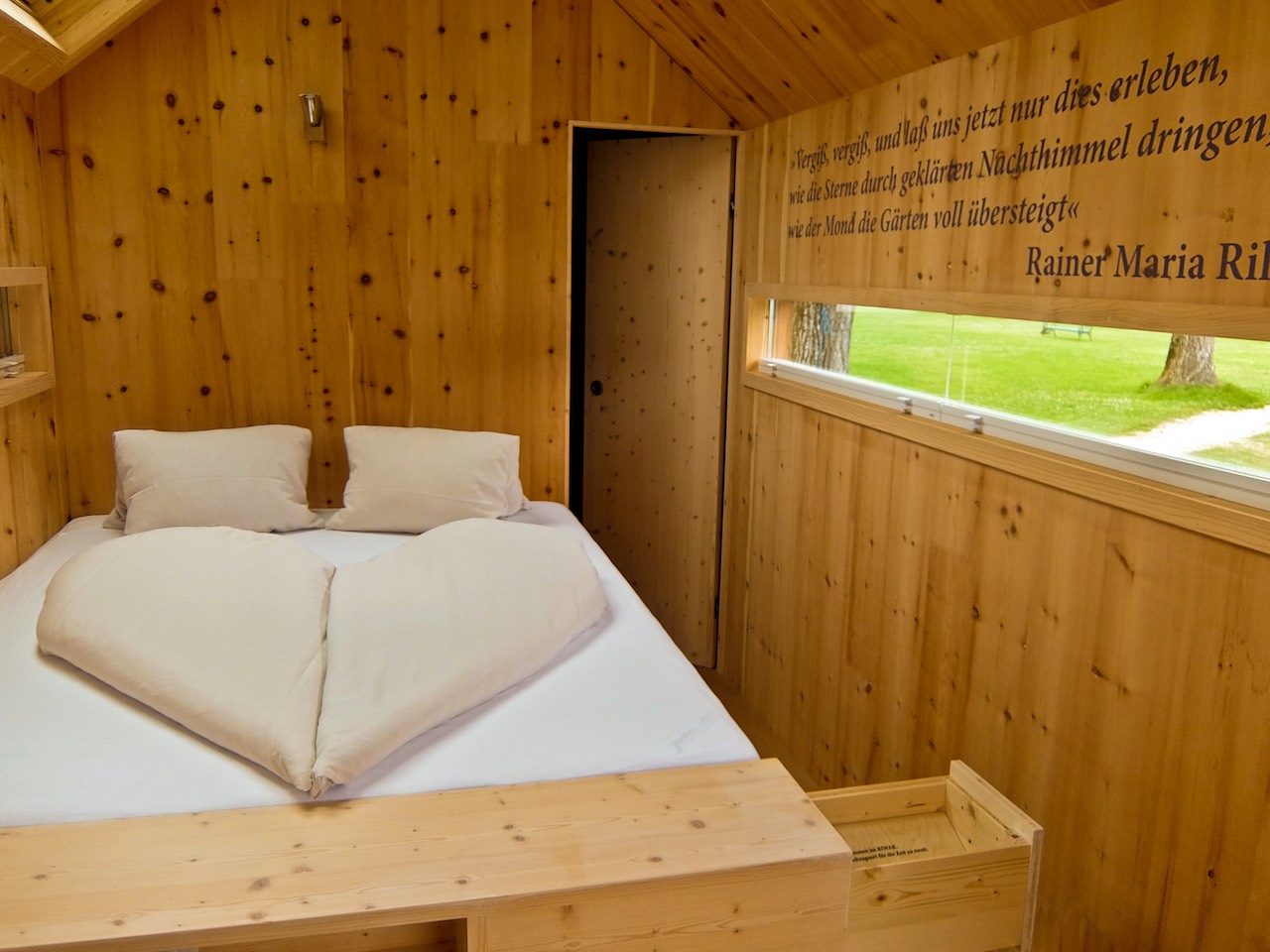 An early morning antique rowing boat trip, across to the unspoilt south side of the lake, is an opportunity to admire the fish in the crystal clear waters, with birdsong the only sound.

Motor boats are restricted and you can happily swim across the lake without fear of being mown down. E-biking is also popular and a circuit of the lake is a pleasant way to spend a morning. Being Austria there are plenty of cafes on the way offering draught beer, sausage and cheese and, of course, Apple Strudel.

I’m here for sterner stuff and the section of the Alpe-Adria Trail that I missed runs high above the lake on a ridge at 2000m over the Nockberge Mountains. It’s a bit of slog up the road from Seeboden, on the lake, to the Pichlhütte, but then I’m on a grassy path. The climb continues until I finally reach the summit of Tschiernock, at 2088m, topped with a large cairn and a huge cross. The lake lies below and there are tremendous mountain views right across to the Grossglockner in the far distance. 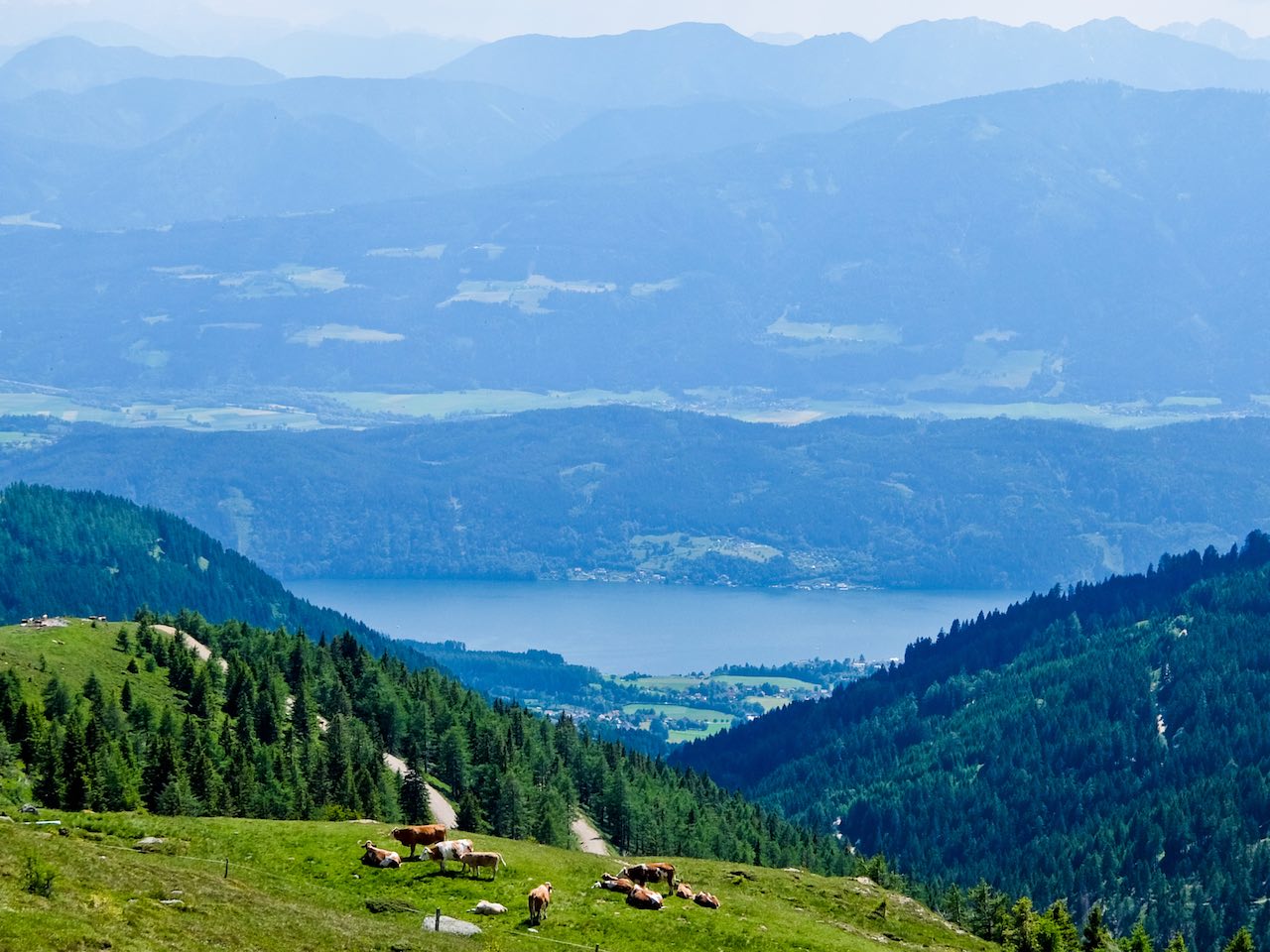 Now it’s an easy ridge walk over the Hockpalfennock and Tschierwegernock peaks before descending steeply to the Alexanderhütte for lunch. They make their own cheese and butter here, with milk from their cows outside munching quality grass. Their speciality is Arnica butter, as yellow as the flowers the cows eat, and ideal to accompany their Harber Kas, a dry strong curd cheese, more like a powder. For the hungry hiker, it tops a thick layer of the butter covering homemade black bread 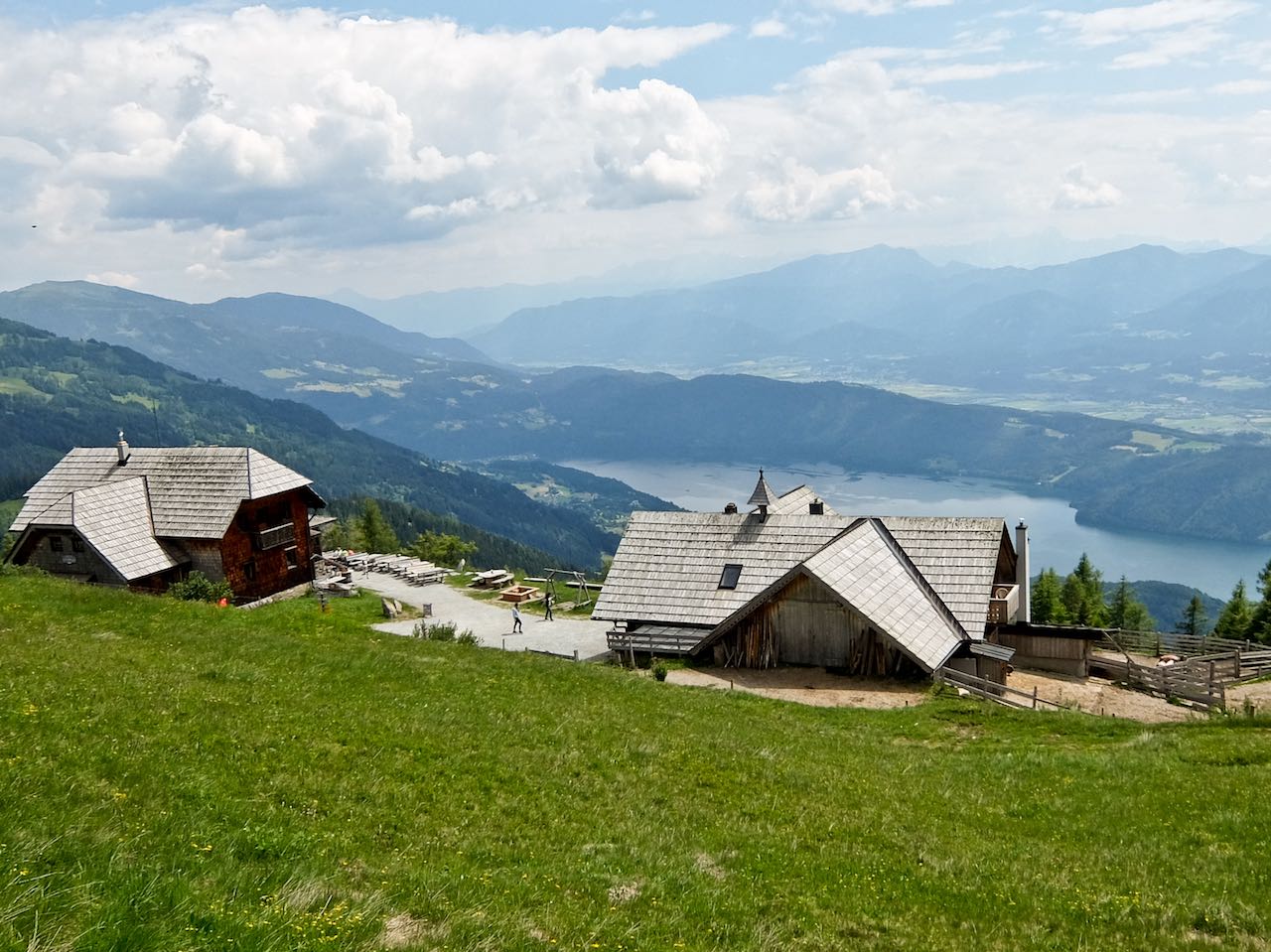 This is fuel for yet another climb on the Weg der Liebe, or Walk of Love, marked by inscriptions and quotations and a wall where people can write their own stories. It crosses Millstätter Alpe at 2091m before reaching the huge Garnet Gate, its metal frame studded with the red gemstones.

The ground round here is full of them and they’ve been mined for centuries. After the summit of Granattor, just ahead, it’s downhill all the way back to the lake at Döbriach. 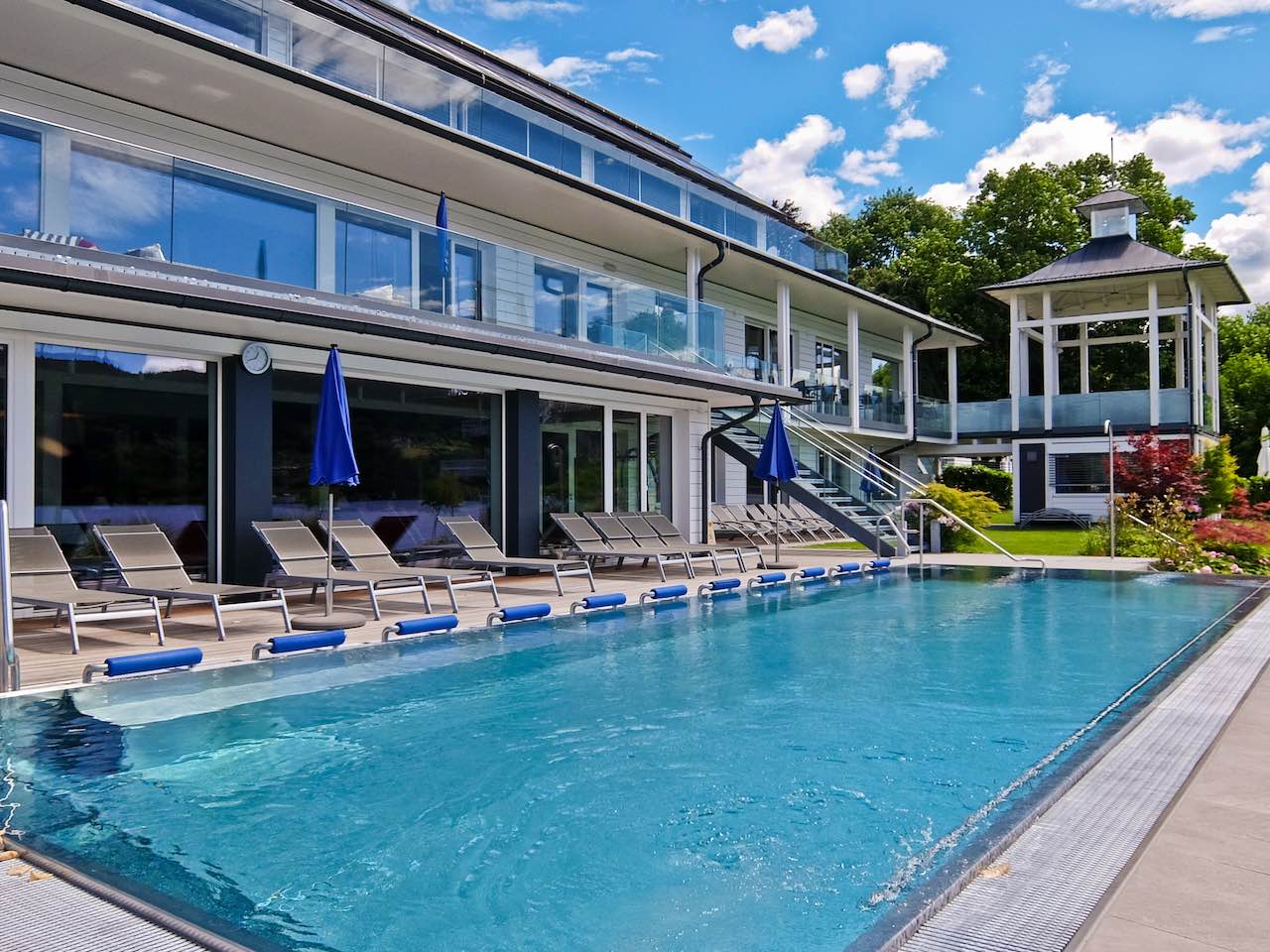 Next day I spend the morning relaxing at the Badehaus, a new spa complex right by the lake. The sauna ease my aches and pains from the previous day’s hiking, before a refreshing dip in the lake waters. I’m still wanting to taste the white fish so I go to the Familienhotel Post in Millstatt where the family has had the Emperor’s permission to put their nets in the lake for 150 years. Of course the Hapsburg Empire collapsed at the end of WW1, but I’m still privileged to get his portion – and very good it is too.

20 Of The Most Beautiful Places To Visit In Austria

Vienna ends lockdown to the east on May 3rd

7 Places to Taste the Best Wiener Schnitzel in Vienna, Austria