Vienna is a city full of charm, history and elegance, and just like any other destination, Austria’s capital has its own spectacular story to tell. Follow us around the Austrian capital as we share our favourite foods, festivities and things to do in Vienna, one of Europe’s imperial cities.

1. Go for a ride on the Giant Ferris Wheel 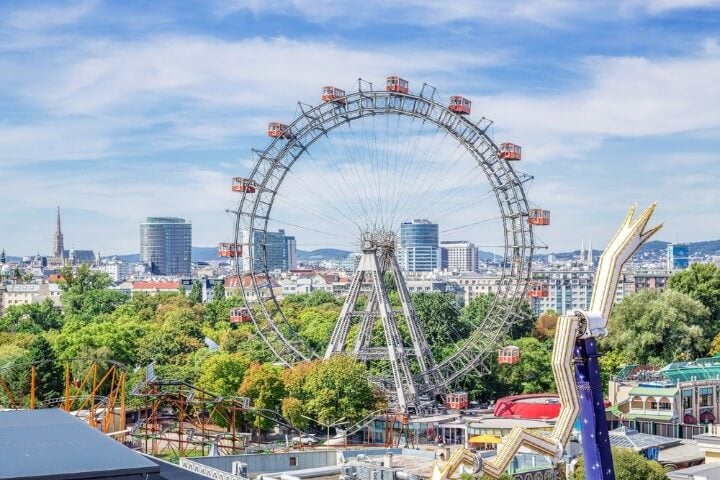 The Giant Ferris Wheel has been an unmistakable part of the Vienna skyline for over a century. The Ferris Wheel was first built all the way back in 1897 to celebrate the Golden Jubilee of Emperor Franz Josef I. Since then it’s seen its fair share of burdens, even getting burnt down during the 1940’s. Sadly, in 2020, the Giant Ferris Wheel got shut down for the first time in 73 years due to the coronavirus pandemic. This Ferris Wheel is an important piece of Vienna’s history – and, if that wasn’t enough, it has the best views of the whole city from up there! If you have time, try out some of the other rides in the Prater amusement park. Some of them might be a bit outdated, but that’s part of their charm!

Prices start from €5 for a child’s ticket and €12 for an adult. The wheel takes between 10 and 20 minutes to do a complete circle, giving you plenty of time to take in the view from all angles.

2. Wander around the magical grounds of the Schönbrunn Palace 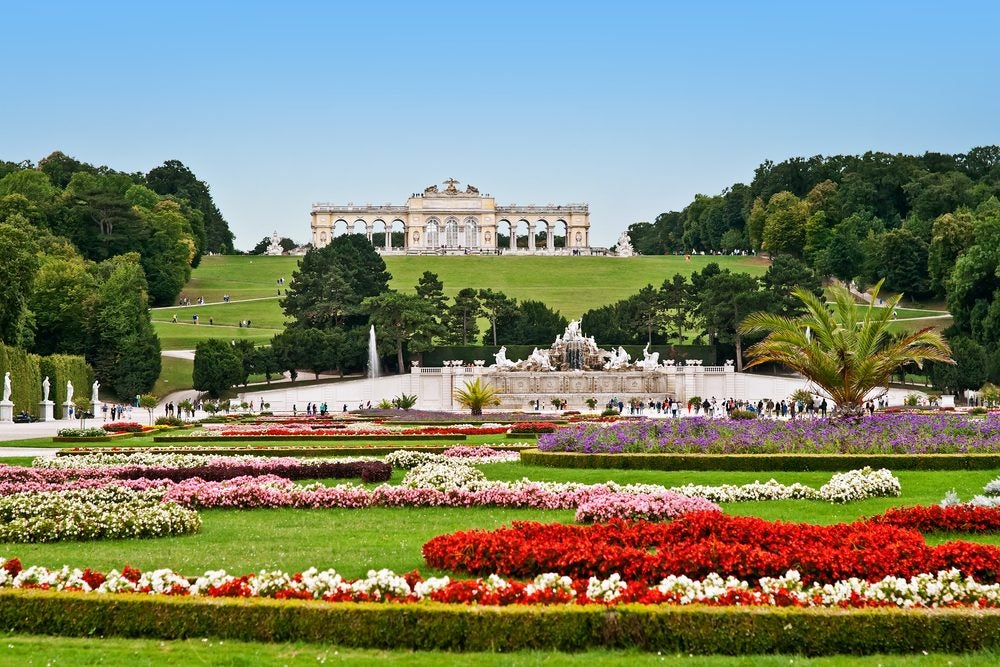 The Schönbrunn Palace was first designed in the seventeenth century as an imperial hunting lodge for the son of Emperor Leopold I. This sprawling palatial masterpiece as it’s seen today is a far cry from what first comes to mind when thinking of a “hunting lodge”. Over the years, it’s grown in size and grandeur to be what it is today. Visiting the Schönbrunn Palace is one of the most popular things to do in Vienna, but what we love the most about it are the gardens. Stretching out for little more than a square kilometer, the gardens showcase all sorts of nature within its grounds. Carefully manicured hedges and lawns, a botanical garden, an orangery and a rustic woodland that gives a nod back to the days when the palace was a hunting lodge. The gates open at 6.30am and the park is free for everyone to enter during its opening times. One of the best things about the Schönbrunn Palace gardens is that the locals are able to enjoy it as their own. You’ll often see joggers running around the gardens in the morning, or families playing in the gardens. However, to visit some of the special attractions within the park, such as the Privy Garden, the maze or the Zoo you will need to purchase individual admission tickets. 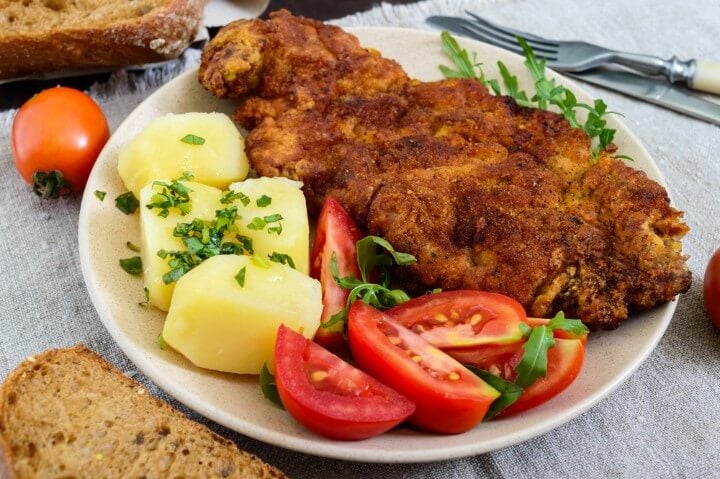 The Viennese schnitzel is the national dish of Austria and you couldn’t possibly visit Vienna without tasting a few. To make this mouthwatering dish, premium veal is fried until golden brown in lard, and is traditionally served with a lemon slice on top that you squeeze all over for a tangy finish. Schnitzel’s often come accompanied with a traditional Viennese potato salad, but you’ll find all sorts of variations depending on where you go. If you’re feeling particularly peckish, try the Viennese schnitzel at Figlmüller. They make one of the best and biggest schnitzels in town. Here, the schnitzels are so big that they fall over the sides of the extra-large plates that they are served on. This cozy traditional Viennese restaurant is nestled into a prime location just behind St. Stephen’s Cathedral – a perfect stop off point after a morning of sightseeing around Vienna.

4. Have lunch at Naschmarkt 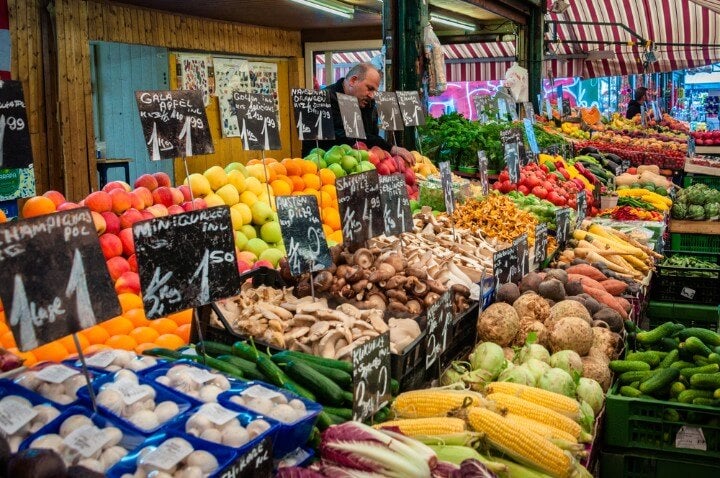 Naschmarkt is the most famous and the most luxurious food and produce market in Austria. A wonderfully eclectic market where you can buy all kinds of things, it’s a great place to grab a cheap, fresh lunch in this normally expensive city. It’s also a chance to sample some of the local produce and support small Austrian businesses while you’re visiting. Locals come to shop here for their daily groceries such as fruits and vegetables. However there are also stalls selling ready to eat food, which attract the tourists, such as baked goods, sandwiches and hot dogs. It’s also a great place to pick up some food for a picnic as the market sells a wide variety of international cheeses, wine and even Japanese sushi! The Naschmarkt is open every day except Sunday, and the best times to visit are between lunchtime and evening.

5. Have a slice of Sacher cake at the Sacher Hotel 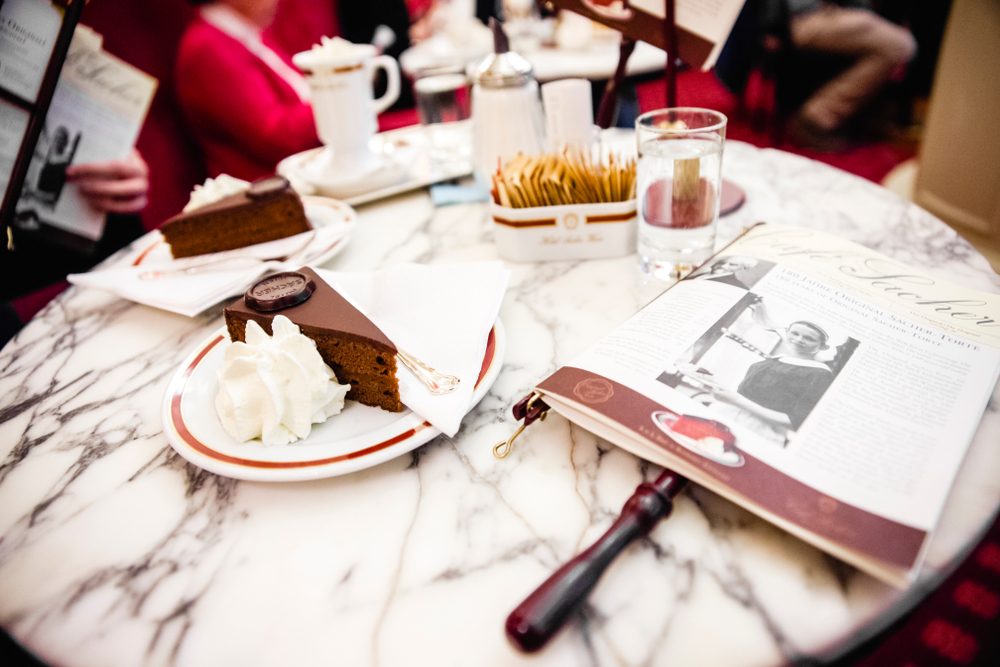 The Sacher cake, or Sachertorte is one of the most famous types of chocolate cake there is. Sachertorte is a chocolate sponge cake cut into three layers, with thickly spread jam sticking the layers together. The whole cake is then coated in a dark chocolate icing to create its signature velvet-like texture. Traditionally served with unsweetened whipped cream.

Where better to enjoy a large slice of chocolatey goodness than the home of Sacher cake itself – the Sacher Hotel. The recipe of Hotel Sacher’s “Original Sacher Torte” is a closely guarded secret, so don’t expect to go home with the recipe any time soon! The secret ingredient to this cake is said to be in the chocolate that ices the cake, rather than in the cake itself. Try it for yourself and see what you think! The Sacher Hotel is an iconic place to stay if you’re visiting Vienna for a special occasion, or a romantic getaway – however there are many other cheaper hotels in Vienna too.

6. Enjoy the festivities at Rathausplatz 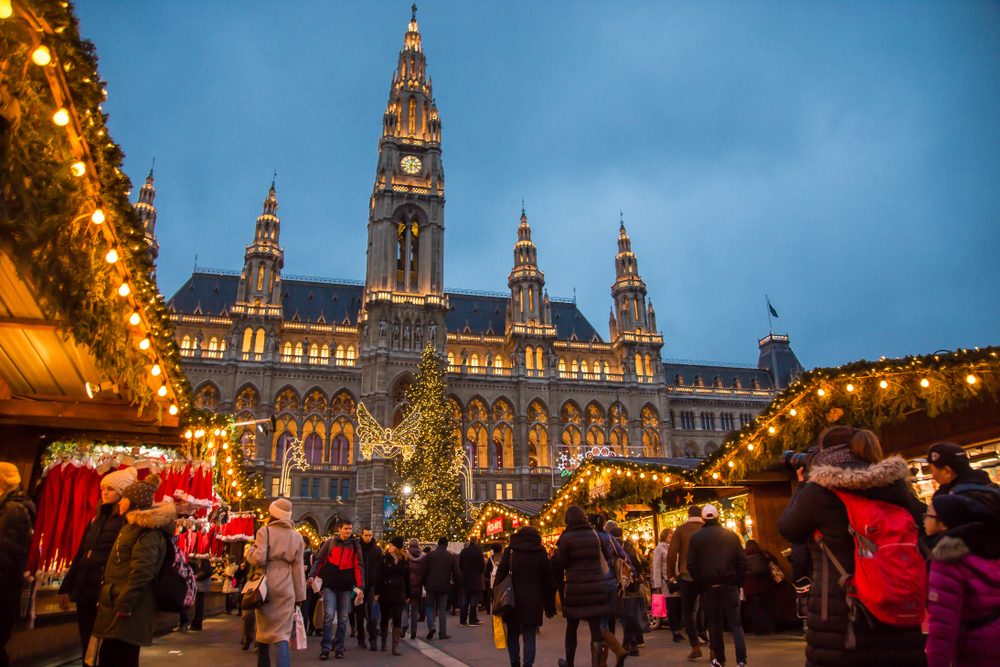 See the Rathaus (Vienna’s City Hall) in all its splendour at night. Impressive even during the day, this breathtaking building becomes even more extraordinary at night. The square in front of the building, the Rathausplatz, is the location of some of the city’s most popular events. The Christkindlmarkt, Rathaus Film Festival, and Vienna Ice World all take place here. Going to the Christkindlmarkt (Christmas market) is one of the best things to do in Vienna around Wintertime. The whole square and City Hall building are lit up in festive lights and Christmas decorations. The Christmas market is set up in late November, and stays until the end of December. But if you visit Vienna after this time, not to worry, as in January the festivities start again – Vienna Ice World opens up from mid-January to early March, turning the Rathausplatz into a huge icey wonderland. Different ice rinks and ice walks wind through the fairy-lit trees, and there are a number of stalls selling food and warm drinks to keep you toasty! 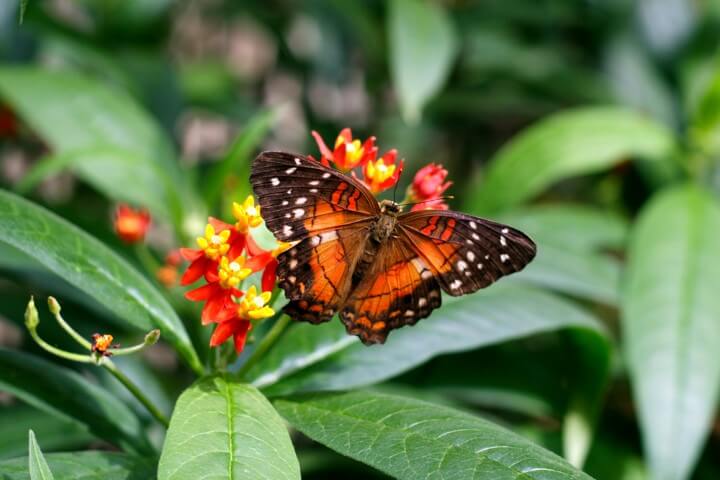 Perhaps one of the most surprising things to do in Vienna is taking a walk through the Butterfly House. The Palm House in Burggarten is one of the most beautiful art nouveau buildings in the world. Since 1998, The Palm House, which extends more than 3,000 square feet in area, towers over the garden of the Imperial Palace. The interior of one part of the Palm House is designed specifically as a butterfly house. It has waterfalls, large trees and exotic plants, making it the optimum surroundings for the hundreds of free-flying tropical butterflies. Make sure to dress in layers that you can easily take off when you visit the Butterfly House, as the temperature stays at 27°C and the humidity is always 80%. The house itself features a fantastic restaurant to cool down after a stint in the humidity. The large glass walls allow the sunshine to beam in, and has beautiful views of the gardens outside.