Salzburg owes much of its fame to prominent former residents, such as composer Wolfgang Amadeus Mozart, poet Georg Trakl and the von Trapp family, who inspired Richard Wise’s movie The Sound of Music. The city was listed as a UNESCO World Heritage Site in 1997 and boasts a vibrant music and art scene, stunning landscapes and a lively folk culture. Here are a few pocket-friendly ways to enjoy beautiful the city at its best.

The cheapest and most authentic way to discover Salzburg is by walking. The city is small enough for you to easily cover all of the historic Old Town on foot. Wander through the old gassen (German for alleyways), like the famous Getreidegasse, the Goldgasse or drift through Kaigasse and up the scenic Nonnberggasse. Admire the quaint medieval houses built into the rock in Steingasse and visit Salzburg’s former red-light district in Herrengasse. 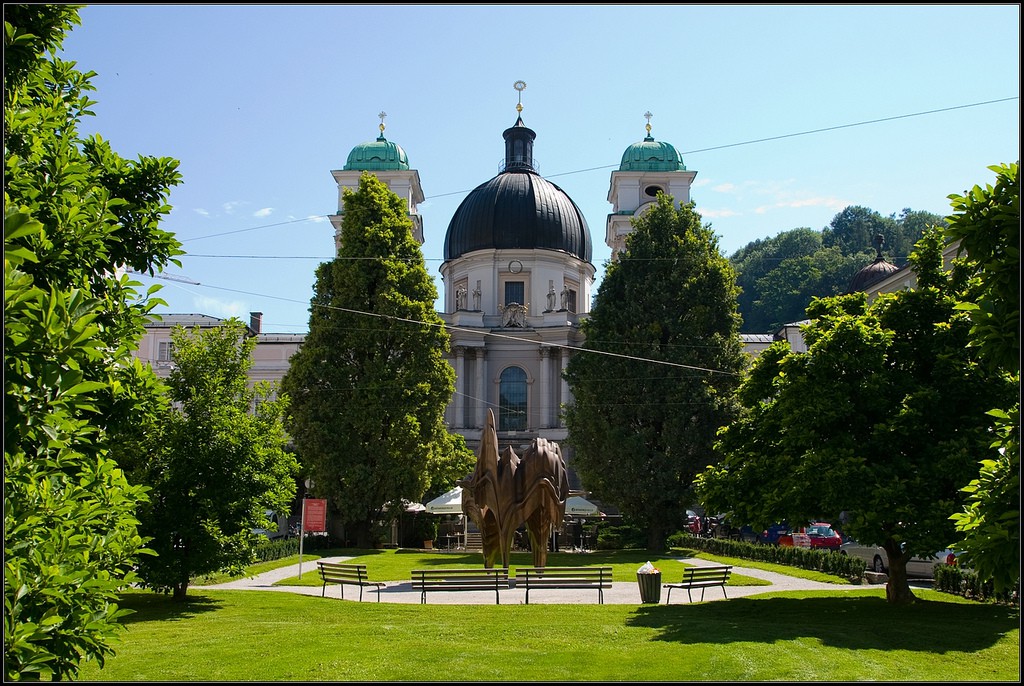 Step inside the cathedral’s opulent gold-laden interior or meditate in the soft light of the simpler Kollegienkirche (University Church). Explore Petersfriedhof, one of Salzburg’s most beautiful cemeteries. Follow the delicious aroma of freshly baked bread down to the Stiftsbäckerei St. Peter, the oldest bakery in town, which is half-hidden behind its impressive mill wheel.

After exploring the Old Town, take a break inside Mirabell Gardens or on the banks of the Salzach river and do some people watching. Salzburg practices a perfect mix of traditional and modern lifestyle: you will spot locals going about their daily business in traditional Austrian outfits, copious amounts of beer being delivered to the Old Town cafés and bars, tourist groups stopping to take pictures, and students of the University for Music and Dramatic Arts Mozarteum hurrying to their lectures with their instruments in tow.

Leave the hustle and bustle of Salzburg’s cobbled streets and wander up one of the nearby mountains. Salzburg was built around, and even into the rock face of Mönchsberg, Nonnberg, Festungsberg and Kapuzinerberg mountains. The Hohensalzburg fortress, a town landmark that sits on one of these mountains, can be reached on foot via Festungsgasse lane. If you head up Festungsgasse and stick to your right, you will pass the entrance to the fortress and eventually reach the serene, wooded Mönchsberg mountain. This place is treasured by the locals as a kind of urban alpine pasture, the perfect escape for exercising, relaxing and enjoying breathtaking panoramas. 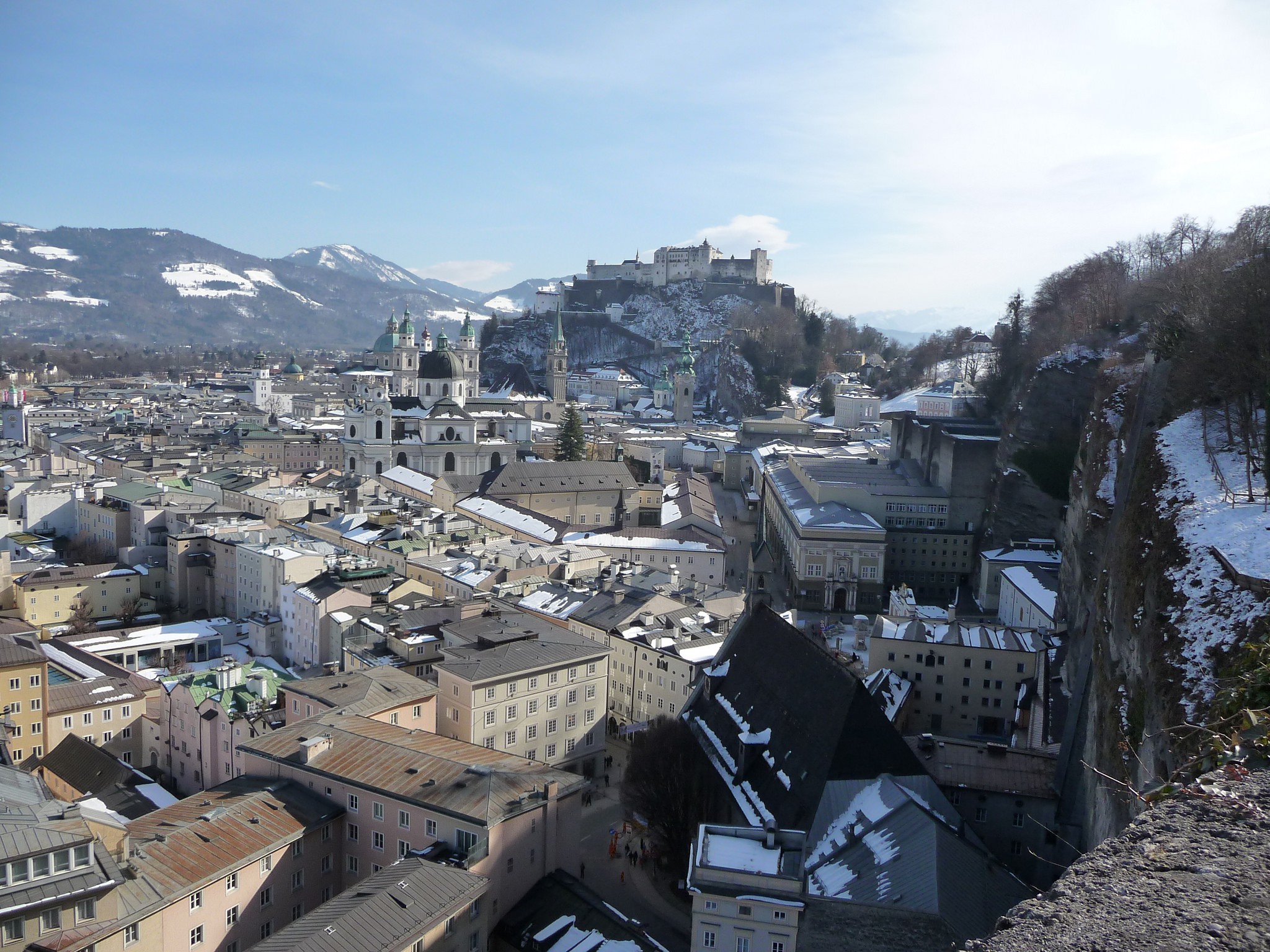 Panorama View from the Moenchsberg of Salzburg City | © Reisender1701 /Flickr

Viewpoints such as Richterhöhe, Neutor and the small square in front of the Museum of Modern Art will be more than enough reward for the hike. If you head left instead when coming up Festungsgasse, you will find Stift Nonnberg, a quiet old convent with an unbelievable view of the surrounding countryside and mountains. Stift Nonneberg is still an active convent and if you time it right, you may get to enjoy a few peaceful moments inside the church and hear the nuns sing vespers. This place also has a claim to fame thanks to The Sound of Music. For another spectacular, little-known viewpoint, head down to the University of Salzburg’s Unipark Nonntal building and go up to the rooftop terrace. Grab a coffee from the UnikumSky café and enjoy a unique 360-degree view of the fortress, the city and the mountains.

Get on your bike

If you prefer a slightly faster mode of transportation and also want to blend in with the locals, why not rent a bike? You can do this near Staatsbrücke Bridge. Salzburg has an extensive and well-maintained network of bike paths, including a cycling superhighway along the main river. Unlike in other Austrian cities, you are allowed to ride your bikes at low speed in pedestrian zones in Salzburg. Follow the Almkanal water channel out to Leopoldskron Palace and nearby lake, which is one of the most famous locations in The Sound of Music. Take about a two-minute ride from Leopoldskron and look for a little path called Wolfgang-Schaffler-Weg. Along this path you will be surprised to find cows, pigs and even flamingos, all right in the middle of the city. 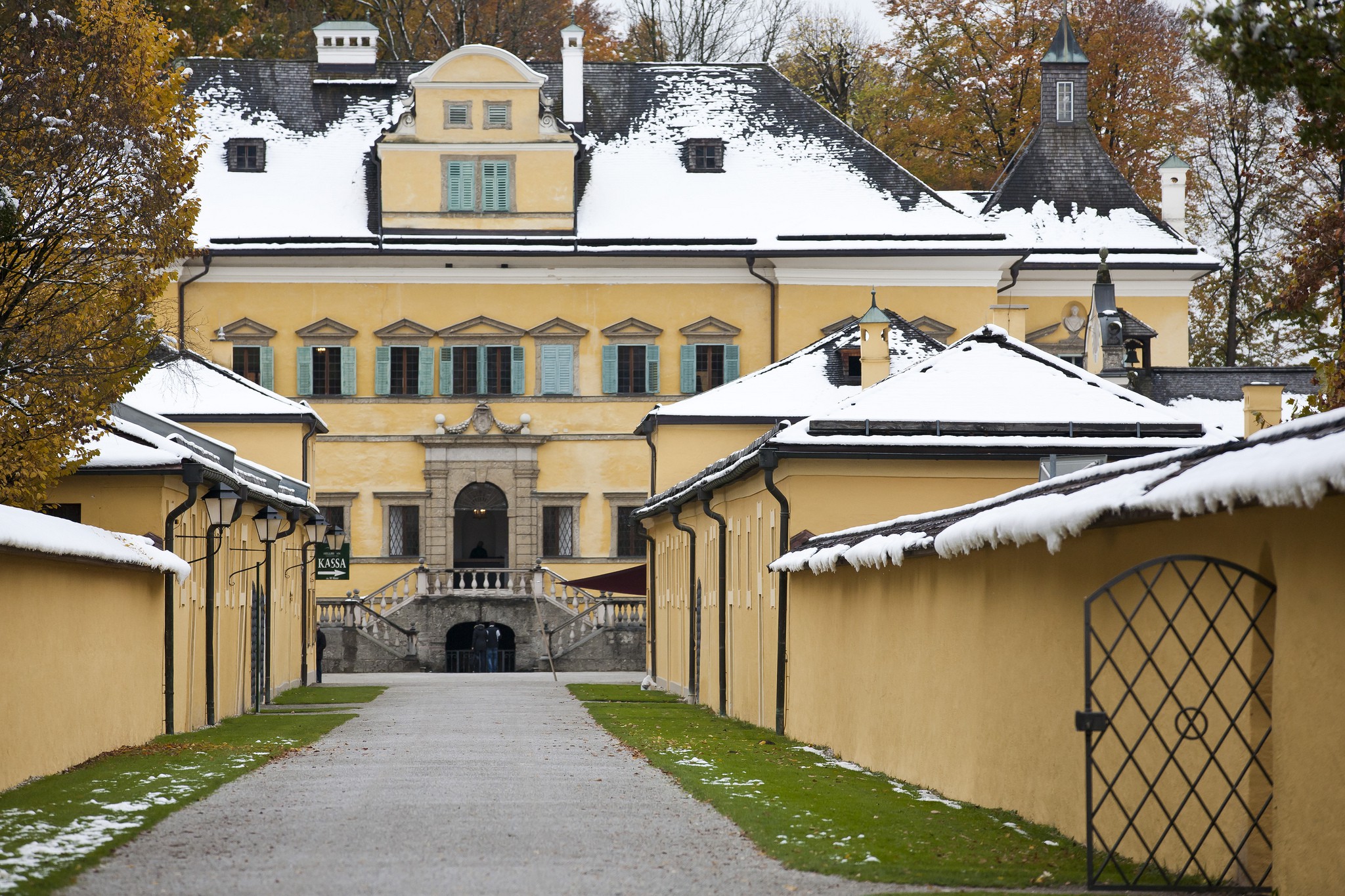 For some stunning glimpses of the Salzburg countryside, bike out to Hellbrunn Palace and gardens along the picturesque, tree-lined Hellbrunner Allee lane. Watch out for dog walkers and people on horseback, who share the lane with bike riders. Once at Hellbrunn, wander around the impressive grounds. Marvel at the size of the fish in the palace ponds. If you are visiting around Christmas time, make sure to enjoy some hot Glühwein and sausages at the Hellbrunn Christmas Market to warm you up.

Art is everywhere in Salzburg. Aside from a range of museums and free galleries, for example, the Galerie Thaddaeus Ropac, sculptures, installations and other works of art can be found throughout the city. Muse about Erwin Wurm’s Gurken (cucumbers) in Furtwänglerpark, visit German contemporary artist Stephan Balkenhohl’s Sphaera on Kapitelplatz, or take a moment to experience the light effects inside James Turrell’s SKY-SPACE near the Museum of Modern Art. Definitely keep your eyes peeled for the 250 Stolpersteine (stumbling blocks) – monuments to the terrible crimes of the Holocaust, which can be found in the sidewalks all over Salzburg. 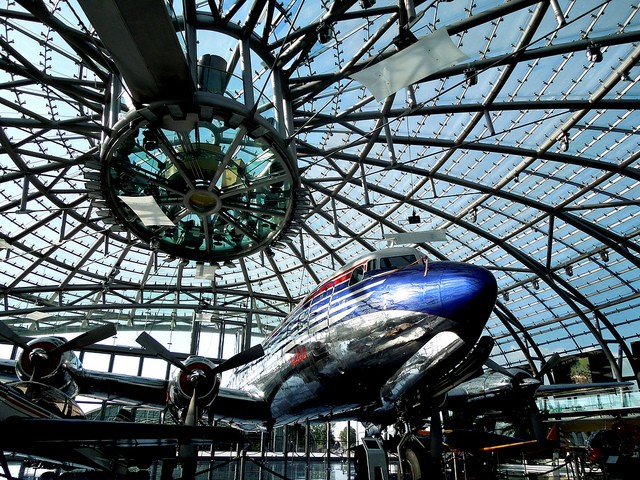 If you are looking for a more unconventional art space, visit Hangar-7, located not far from Salzburg airport. The hangar is the brainchild of Red Bull inventor and Salzburg local Dietrich Mateschitz and is home not only to airplanes, Formula One racing cars, and helicopters, but also features changing art exhibitions, all of which can be visited for free.

Listen to the sound of music 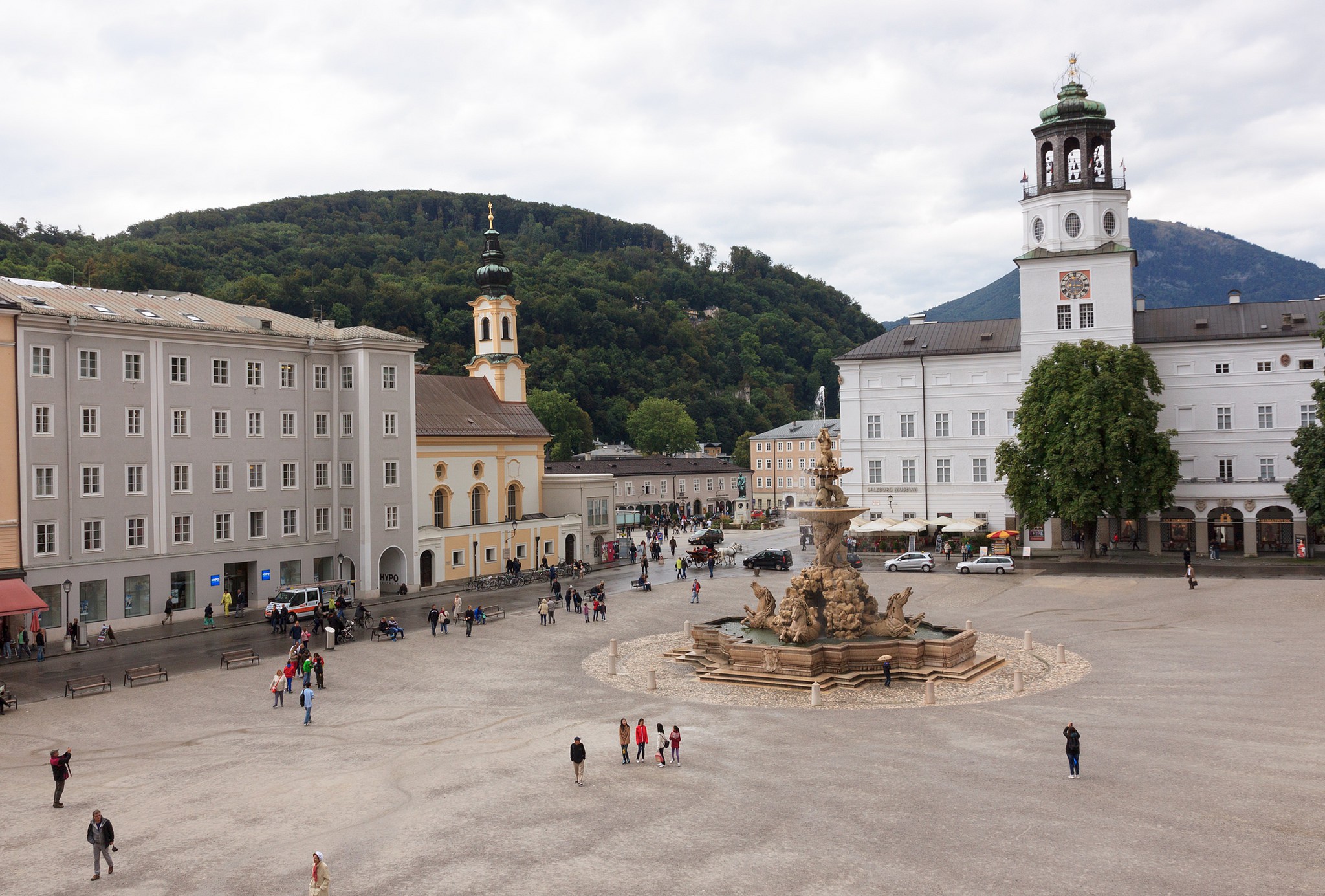 In Salzburg, even the streets are alive with the sound of music, particularly during the Salzburg Festival in the months of July and August. Tickets for a wide array of performances of music and drama are usually in very high demand and can be expensive. However, thanks to its long-standing musical tradition, Salzburg has always attracted immensely talented buskers and music students, who are happy to provide the soundtrack to your afternoon coffee or stroll through the old town. Find them near the Großes Festspielhaus (Great Festival Hall), under the stone arches on either side of the cathedral, on Residenzplatz square and in Mirabell Gardens. If you are in Salzburg during the Festival and want to see Festival productions for free, Siemens Festspielnächte put on daily open-air screenings on Kapitelplatz square, which visitors and locals can enjoy for free. 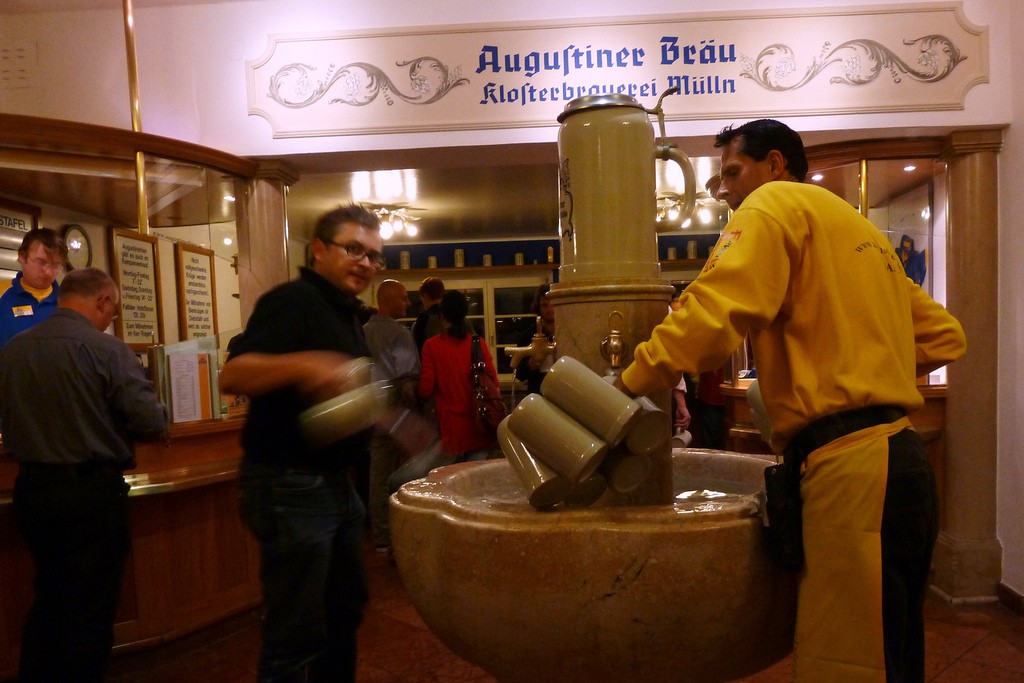 For a relaxing and tasty end of your day, make your way to the Augustiner Braustübel brewery, an old Augustinian monastery-turned-brewery. It is one of the best places in Salzburg to enjoy some fantastic beer and experience Austrian gemütlichkeit (basically a friendly, comfortable atmosphere) in the impressive beer halls, or under the old chestnut trees in the garden. There are stalls selling typical Austrian food and pastries, however, you may want to take advantage of the Augustiner Bräustübel’s BYO rule, which allows guests to bring their own food, as long as all drinks consumed are bought at the brewery.

A Solo Traveler’s Guide to Austria