The Alps of Europe are home to many truly magical sights, but none are quite like the village of Hallstatt. Off in the traditional Salzkammergut region of Austria, this small lakeside village is completely captivating. Surrounded by epic mountains and full of old alpine houses, it’s perfectly easy to see why.

Easily visited from the major Austrian city of Salzburg, the village of Hallstatt is regularly on people’s itineraries when visiting Austria. Photos of Hallstatt are so pristine, that it can be difficult to believe it’s real without seeing it with your own two eyes. It’s this wonderful scenery that makes Hallstatt arguably the best of the many different day trips from Salzburg that you can make. By following these tips for traveling to Hallstatt, hopefully you’ll agree.

So that you can make the most of our travel tips for Hallstatt, you’ll need a bit of background on the small village. And it is small! The population of Hallstatt is fewer than a thousand people. Perhaps part of the reason for its size is due to it being a somewhat remote village located along the northern edge of the country’s Alpine region. Close to the country’s western border with Germany, Salzburg is the nearest major city to Hallstatt.

The region that Hallstatt belongs to is known as the Salzkammergut due to the vast number of salt mines. For millennia, the mountains in the area have been mined and it is this trade that created a settlement and allowed it to prosper during the Middle Ages. In fact, the whole Salzkammergut area including Hallstatt was added to the UNESCO world heritage list because of its mining legacy. It’s fair to say that the mountains have served as more than simply scenery.

Let’s just get this out there – there’s no bad time to visit Hallstatt. This alpine lake village looks incredible in every season, whether it’s decked in snow, bursting with autumn colors, or green and lively. You could return to Hallstatt in each of the four seasons and it wouldn’t grow old.

However, there are factors other than weather to take into consideration and that’s what these Hallstatt travel tips are here to help you with. First, you need to keep in mind that certain attractions like the Salt Mine and its funicular aren’t open year round. Then there’s the matter of peak season, when this small village struggles to deal with the large numbers of tourists who visit during the summer months. These points don’t need to stop you from visiting in winter or summer, but they’re important to take into account. 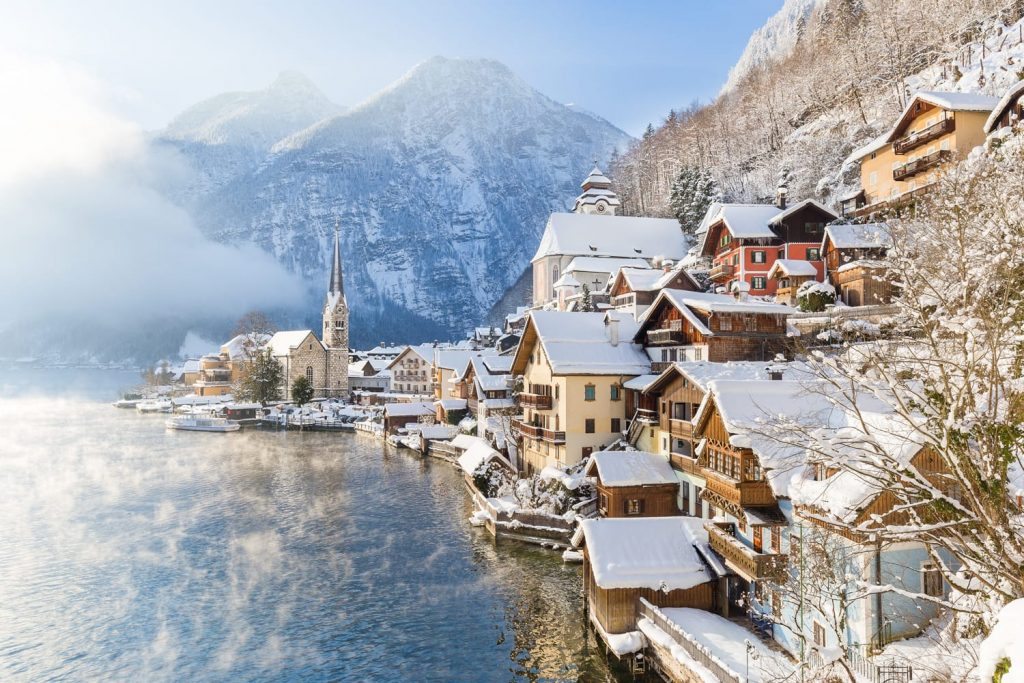 How To Get To Hallstatt From Salzburg

One of the great things about planning a trip to Hallstatt from Salzburg is that it’s such an easy trip to make. Salzburg is a fantastic city with so many things to see and do and it has the added bonus of being a great base to visit Hallstatt from. Even though Hallstatt and Salzburg are only 52 kilometers apart, roughly 32 miles, there are some mountains in the way that make the journey a little longer. Nevertheless, it’s still an easy day trip.

Given how this small alpine village has soared in popularity in recent years, it’s little wonder that there are now many guided tours to Hallstatt. This may be a useful and stress-free way to make your first trip to Hallstatt. These tours tend to run from 5 to 8 hours, depending on what other places they visit besides the village itself. Longer tours often visit different lakes in the area, the spa town of Bad Ischl, and the Dachstein Glacier.

To give yourself the most freedom when traveling this corner of Austria, you may want to consider driving yourself. It will also be the quickest way to reach Hallstatt and allow you to see the village at your own pace. The drive from Salzburg to Hallstatt will take about 70 minutes, although with a few minor detours you can also take in several other nearby lakes along the way. On arrival, look for the large paid parking lot, P2, in the neighborhood of Lahn. This is a convenient place to park both to reach the village and leave again.

To take public transport into Hallstatt, you need to first take the 150 bus to the town of Bad Ischl. From the bus station there, you have the choice to either hop on a bus or take the train for the journey over to Hallstatt. If you go by bus, you’ll need to switch over at Hallstatt Gosaumühle from the 542 to the 543 bus, which will drop you off right at the southern end of the village.

If you choose to travel to Hallstatt by train, it’s important to know that the town’s train station is actually on the far side of the lake. To reach the village, you’ll need to take the year-round ferry that brings train passengers over, a one-way ticket for the ferry costs €3.

What To See And Do in Hallstatt

A common mistake when making a trip to Hallstatt is not allowing enough time to see everything. Many people don’t realize that there’s more to see in Hallstatt than just the village, and they miss out on the other attractions that can be enjoyed there. Therefore, one of our most important travel tips for visiting Hallstatt is to know what you want to do there so that you give yourself enough time. 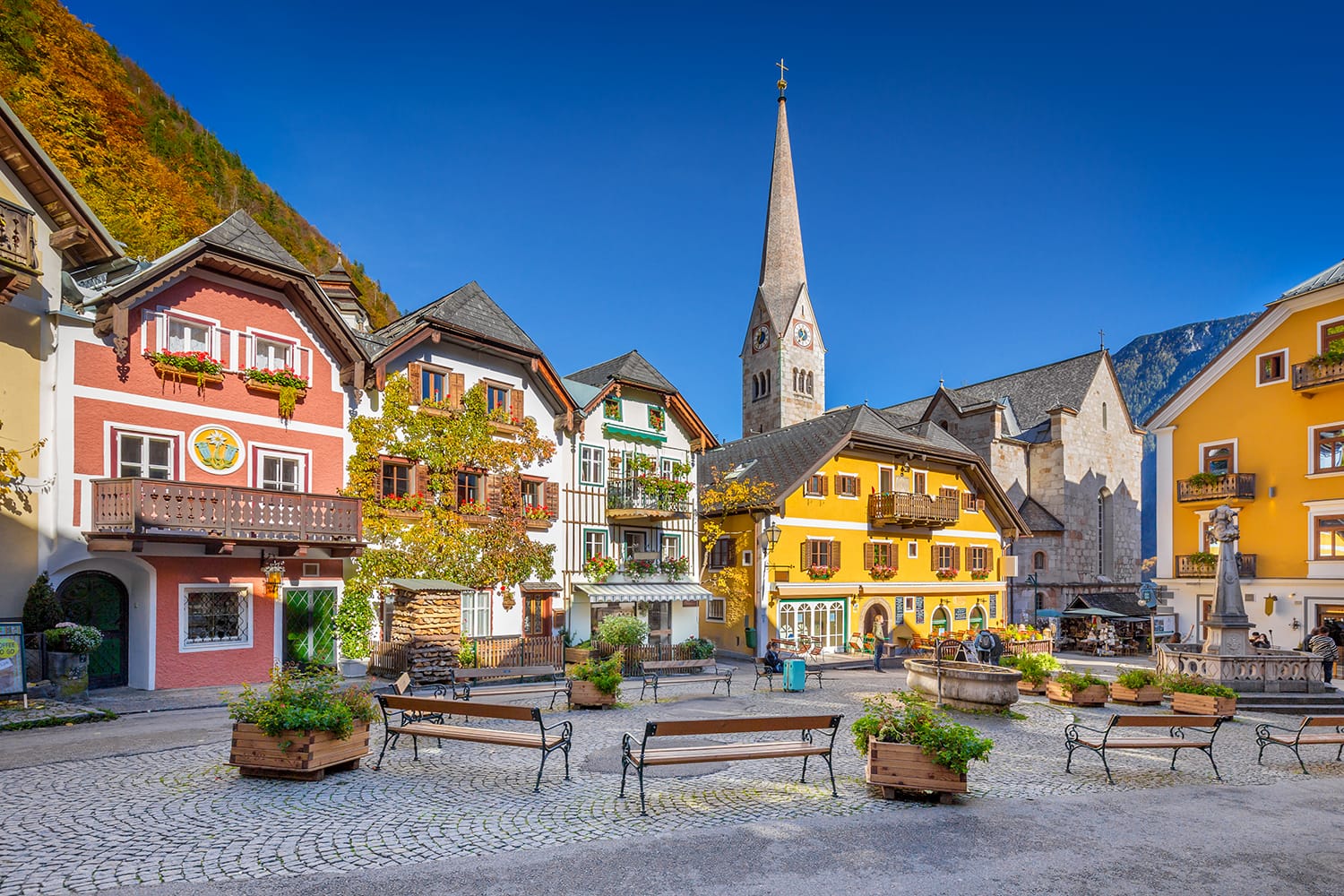 Naturally, the most important thing to do in Hallstatt is to see the village of Hallstatt itself! Since you can walk from one end of the village to the other in twenty minutes or so, that may not seem all that interesting. But when you find yourself stopping every few steps to admire the spectacle in front of you, not to mention the different routes you can take, exploring the village can take quite a while.

First off, you’re going to want to walk along the lake, saying hello to the swans as you survey the iconic waterfront. With old wooden boat sheds by the water’s edge and beautiful wooden alpine houses everywhere, you’re likely going to take a lot of photos. Later on you can follow staircases that lead up to higher parts of Hallstatt and find even more charming houses and entirely new vantage points.

Searching for landmarks, the first to find is the quintessentially pretty Marktplatz. The main square in the village, Marktplatz really is picture perfect. Nearby, you’ll also find several protestant and catholic churches which are best viewed from above, where their spires merge with the village rooftops and create more postcard-worthy scenes. 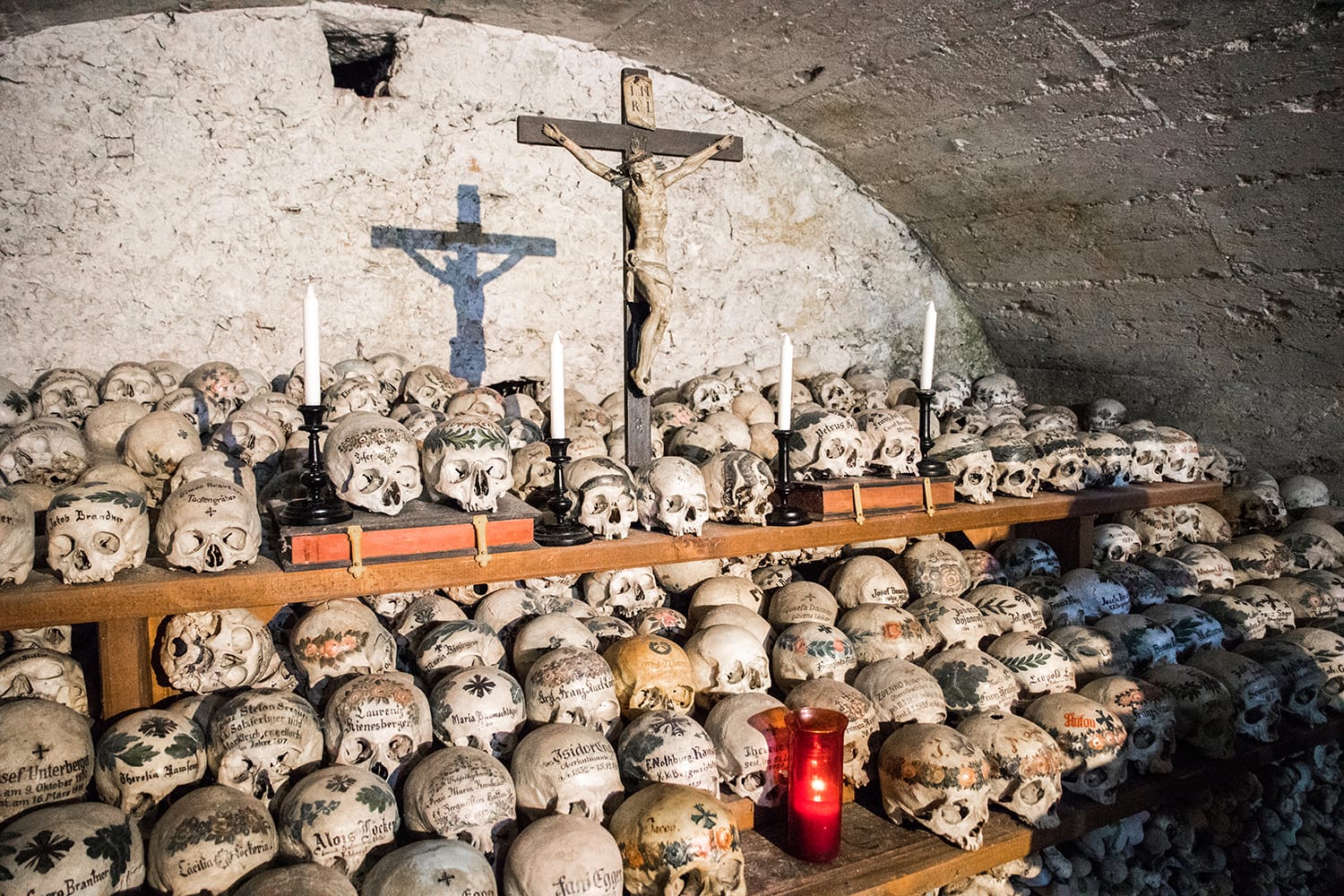 Of Hallstatt landmarks, there is one particularly unusual site that you should seek out. Inside St Michael’s Chapel in the cemetery of the village’s catholic church, you’ll find the Charnel House, otherwise known as the “Bone House”. Due to limited space in Hallstatt, burial plots were reused here and the bones of the dead were stacked in this small ossuary. The skulls are decorated and bear the names of the departed, it’s almost beautiful. 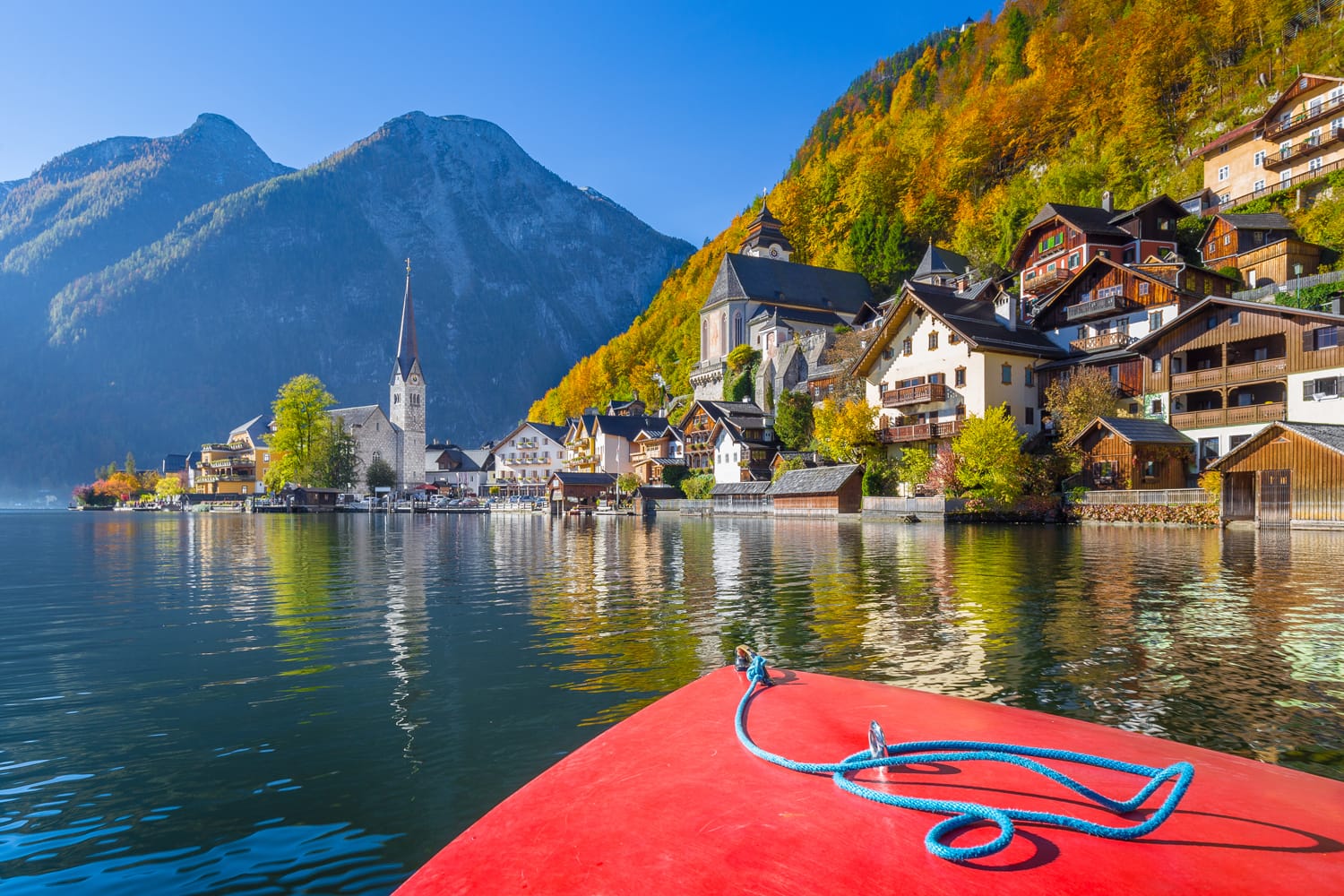 3. Boat Ride on the Hallstätter See

If you haven’t already taken the ferry across the lake from the train station, you may want to consider a gentle boat ride on the Hallstätter See. Not only will it provide you with a new perspective on the village of Hallstatt and the surrounding mountains, but it’ll also treat your legs to a little break. Besides the ferry to the train station, there are also ferries across to Obertraun and up to Obersee. Boats leave from the towns southern Lahn terminal and the northern Markt terminal. 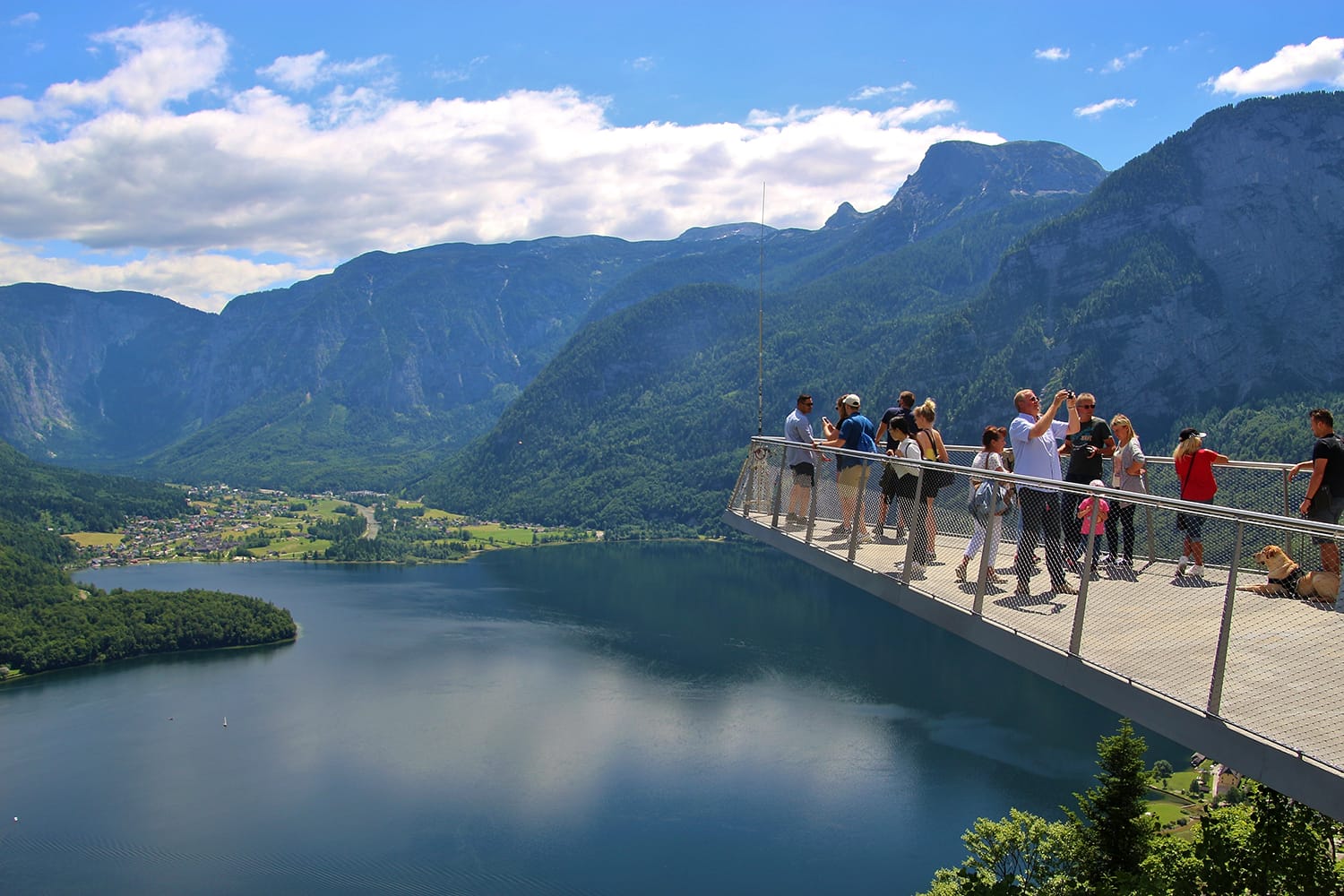 While one side of Hallstatt lies on the shore of the Hallstätter See, the other side of Hallstatt is pressed up against a steep hill. On this hill, behind the village,you’ll find a floating skywalk and with it the World Heritage View lookout platform. 360 meters above the village, you’re treated to unparalleled views from the platform over Hallstatt, the lake, and all the mountains which surround this idyllic spot.

To make your way up to the skywalk, you have the choice either to hike or take the funicular. There are several steep paths out of town that eventually converge and bring you to the top of the hill. Expect the hike up to take you at least an hour and for there to be a few gentle walks to be had once up there. At the top you’ll also find the Rudolfsturm restaurant, if you need coffee or a snack after the walk up.

Up in the mountainside from the Skywalk you’ll find yet another important landmark, the Hallstatt Salt Mine. Although one of many salt mines in this region of Austria, Hallstatt’s has the distinct honor of being the world’s oldest salt mine and still remains active to this day.

While there has been salt mining here since the Bronze Age, today there are over 65 km of tunnels through the mountainside. Although closed from mid-December to the start of March, you can visit the mine the rest of the year, walk through its tunnels, slide down historic wooden slides, and watch a film animation of what life was like there 400 meters below ground.

Your ticket to the Salt Mine doesn’t only include the guided tour, but also allows you to freely take the funicular up and back from the village. 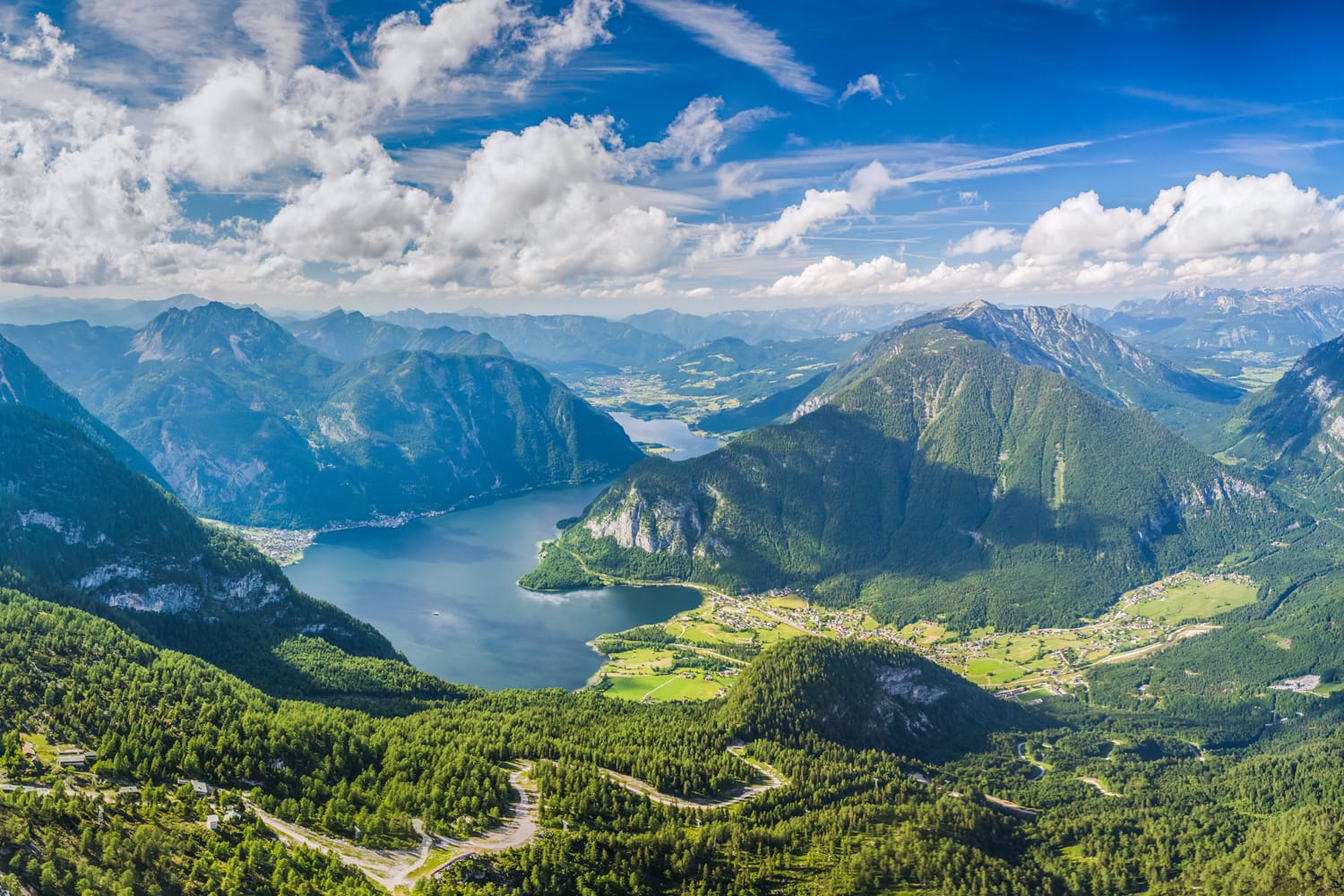 With many mountains surrounding Hallstatt, there are plenty of high places to go for views. And yet, none compete with the 5 Fingers viewpoint atop Mount Krippenstein. Off to the south of the Hallstätter See, this viewpoint includes five separate platforms emerging from the mountain like fingers, as the name would suggest. Each finger offers a slightly different perspective on things, with one even featuring a glass bottom for a perilous view below.

To reach the look out, take the cable car from outside Obertraun up to the Lodge am Krippenstein. Here you can admire the view of the Dachstein Glacier before making the gentle 20 minute walk across to the 5 Fingers. Nearby, you’ll also find a spiral-shaped viewing platform and a remote church chapel.

Where To Eat in Hallstatt

At some point during your explorations of Hallstatt, the need for food is going to come up. For the most part, this small village has two different options. The first are cafes and restaurants like Cafe Derbl or Bräugasthof where you’ll get traditional Austrian dishes like schnitzel and local freshwater fish, plus typical Austrian coffee and cake. In the warmer months, your second option is the many, many ice cream places that pop up all over. You really won’t find too much variety beyond this, but you don’t come to Hallstatt for the food!

Where to Stay in Hallstatt

Most people just do a day trip to Hallstatt from Salzburg but in case you’d like to stay longer in this charming little village, we have listed some places to stay for you below.

Hopefully, our tips for visiting Hallstatt will set you on the right path for a fantastic visit. Considering how enchanting Hallstatt is, it shouldn’t be too hard.

The Best Things to Do In and Around Wildschönau Valley, Austria