You know it’s officially summer once the bears are up and about. More and more people are spotting these giants in provincial parks and sometimes even backyards. A notable recent spotting has to do with a super rare white grizzly in Banff. The elusive creature was caught on camera with its sibling and it hardly looks real.

Bears across Alberta and B.C. are waking up after months of hibernation and are in search of some serious food.

Even in Alberta, Western Canada’s toughest bear named “The Boss” recently woke up and he is now spending his days looking for food and scaring everyone with his intense name. As for the rare white bear, we’ll get your first question out of the way right now. No, it’s not a polar bear.

Parks Canada has told Narcity that this sub-adult grizzly and its sibling are known to be spending much of their time between Banff and Yoho national parks.

While grizzlies are mostly brown, they can come in a wide variety of shades including brown, black, white, or even blonde.

The white colour is believed to be caused by a natural colour phase variation. Parks Canada told us that this colour is unusual but it does happen from time to time. 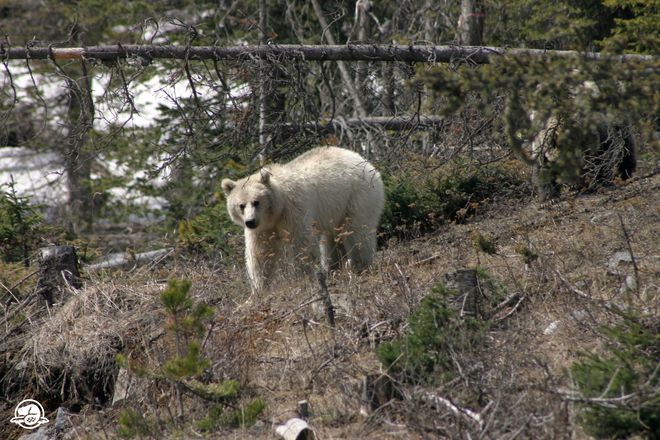 The white grizzly living in Banff is believed to be about three and a half years old. It lives with its sibling. This is the family’s second year away from their mother.

Parks Canada shared some images of the rare bear with Narcity and it truly looks magical.

Its fur is so white that from far away, it could be mistaken for a polar bear.

Upon a closer look (of the photos, not the actual bear), it’s clear to see that it’s a grizzly, as it has some of the defining characteristics including small round ears and a hump between its shoulders. Another grizzly quality less apparent in the photos is the light coloured claws on its front feet. 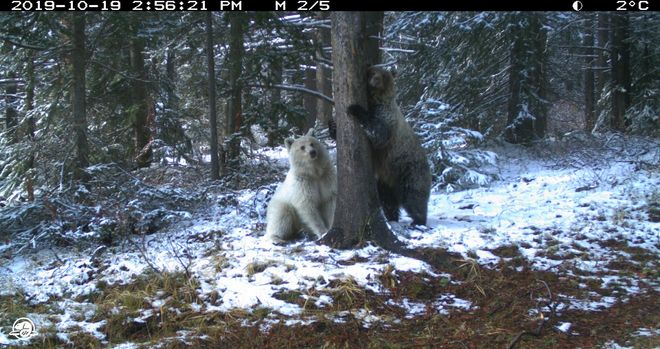 One of the photos even shows the white bear with its sibling and while they couldn’t look more opposite, they don’t seem to mind.

While coming across one of these magical beasts in the wild would be a treat, it’s important to keep in mind that it’s still a wild animal.

Parks Canada wants to remind everyone that if you see the wildlife on the highway, just keep going.

“When visitors see wildlife in other areas they should consider not stopping or, if safe to stop, always stay in their vehicles and give the animal space,” said Parks Canada in an email to Narcity.

“Bears and other wildlife that become comfortable around people and roadsides are at greater risk of being struck by a vehicle.”

Feeding wildlife is also not allowed in any national park. The best thing to do is to keep your distance and always remember that you are in their home.

When you leave an area, take any of your garbage with you in order to make the area less tempting to wildlife.

Who booked the Ubear? Brave group of pals ROAR at shocked bear to scare it off after it broke into their car

Canada Day Events in Vancouver, BC