You’ll find this later on the list, but it’s so important that I want to mention it here too.

Let’s get right to the things you should never do in Hawaii.

1. DON’T TOUCH THE TURTLES IN HAWAII 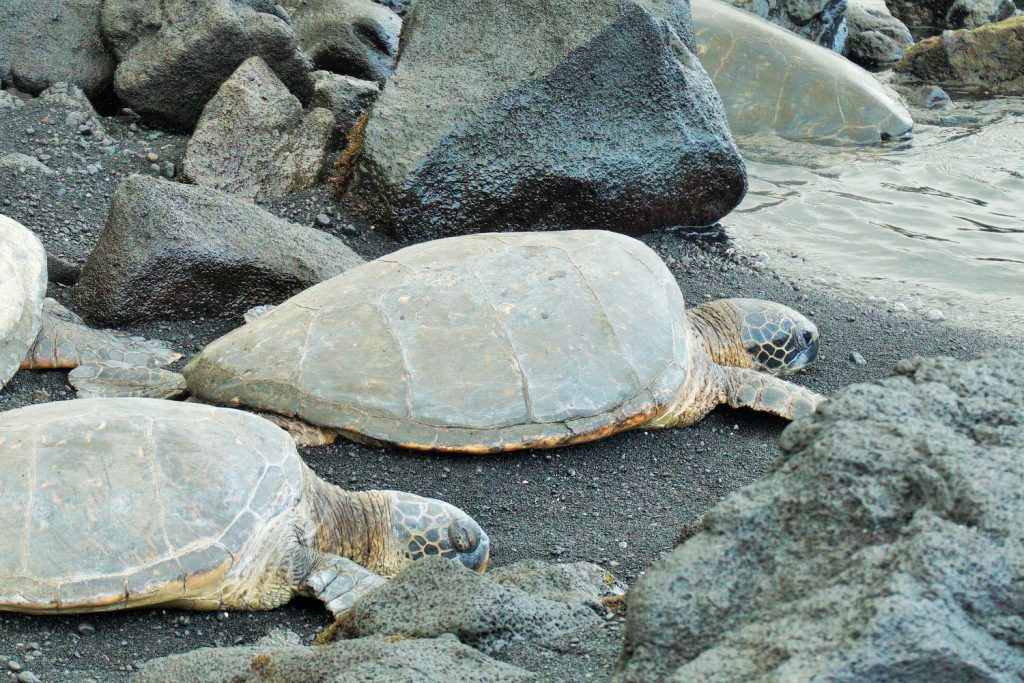 The honu (green sea turtles) are protected and you shouldn’t bother them. Hawaii is also home to four other types of turtles, Hawksbill, leatherback, loggerhead, and olive ridley.

This should go without saying but just leave the turtles alone. Keep a safe distance and remember that this is their home and you are a guest. 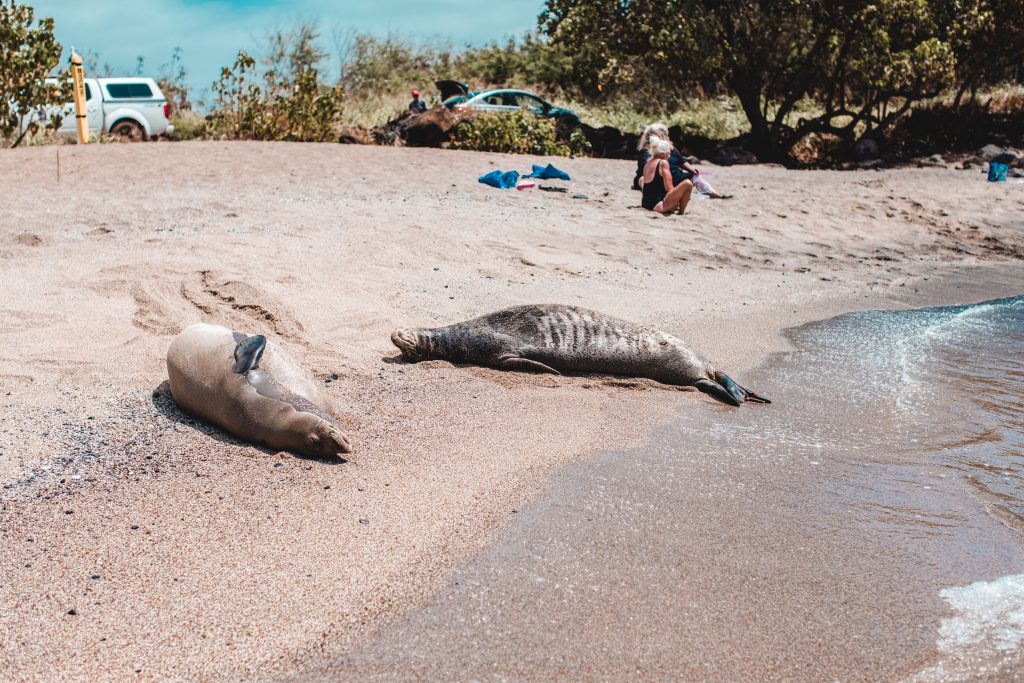 Swimming with dolphins in the wild is a fantastic experience, but keep your distance from dolphins, Hawaiian monk seals, and all other sea creatures.

It’s a privilege to see these beautiful animals, so please be very careful not to disturb them.

3. DON’T TOUCH THE CORAL IN HAWAII

Are you sending a trend with what not to do in Hawaii? There are plenty of “look but don’t touch” things on this list.

Don’t touch the coral, don’t step on the coral, be careful. Touching or stepping on coral can cause irreparable damage to the coral. It can cut you, so be very careful.

You’re probably starting to get the idea. When in doubt, don’t touch it. 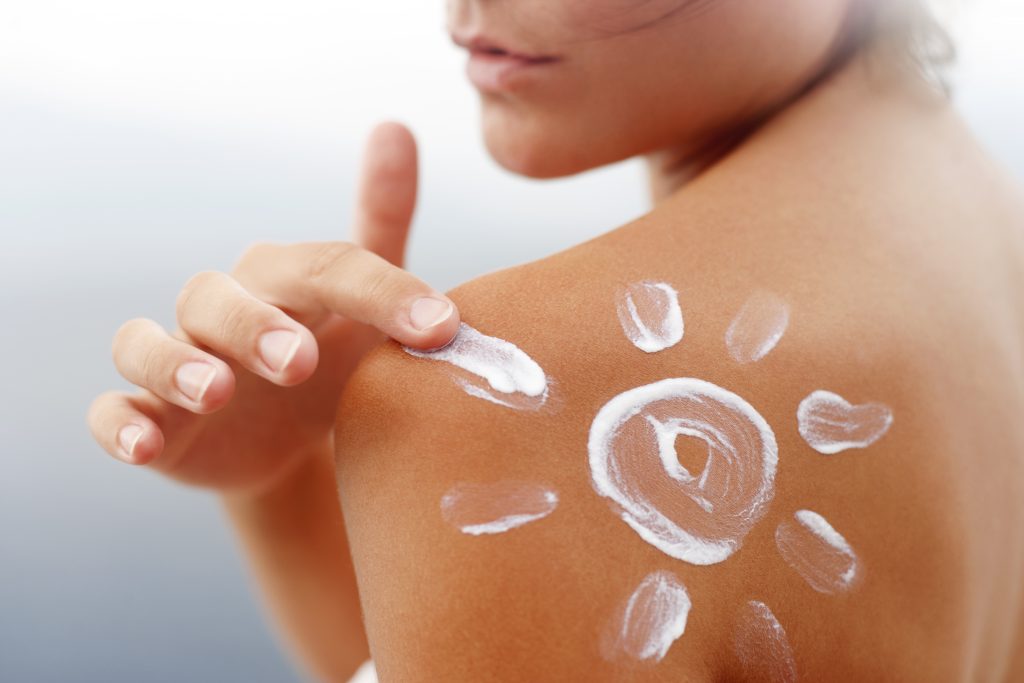 Speaking of coral, make sure to choose a sunscreen that is 100% reef-friendly. I have a blog post about what reef-safe sunscreen is and why it’s important.

Hawaii has phased out sunscreen that isn’t reef-safe, but of course, many tourists still bring their own. Make sure to choose brands that are reef-friendly such as All-Good and Coola.

5. DON’T CALL EVERYONE “HAWAIIAN” IN HAWAII

Being “Hawaiian” isn’t like being “Californian” or a “New Yorker.” Generally, those who live in Hawaii are referred to as “locals.”

You might also see the term “kama’aina” which literally means “child or person of the land.” This is another reference to being local but not necessarily Hawaiian. For example, some restaurants offer “kama’aina” discounts.

6. DON’T UNDERESTIMATE THE POWER OF THE SUN IN HAWAII

I always have people tell me that they “don’t burn,” including my own husband. Hawaii is close to the equator and the sun is intense.

Well, even if you don’t burn at home, you might burn in Hawaii! Make sure to stock up on reef-safe sunscreen before you leave, just in case. 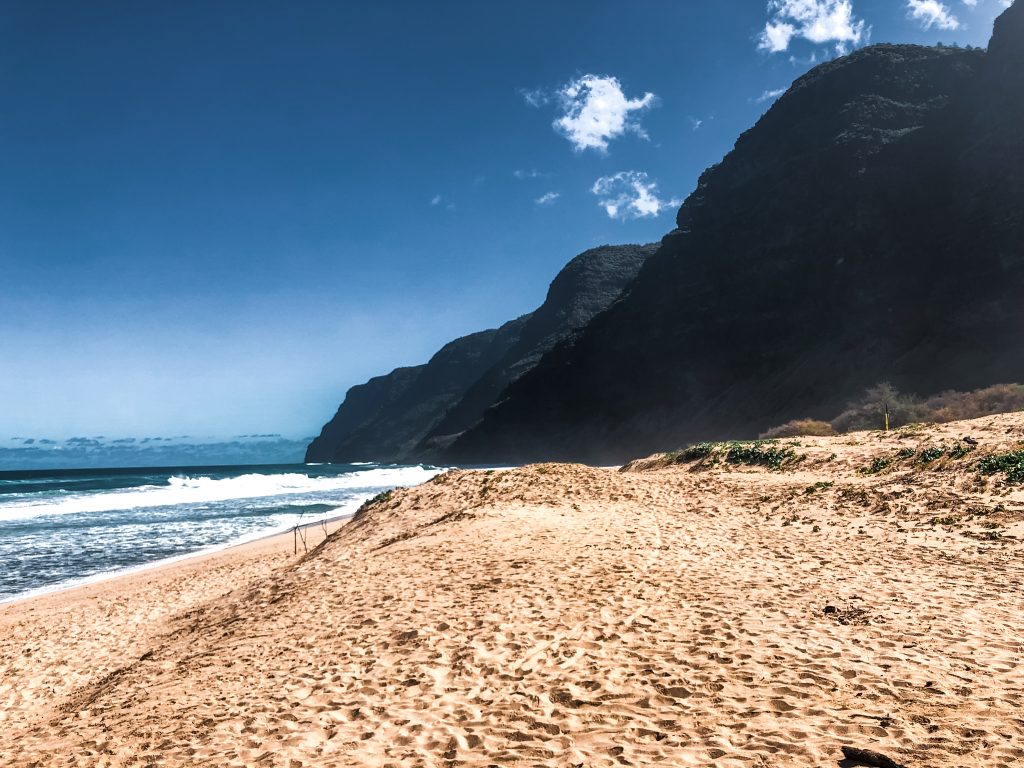 Every island in Hawaii is beautiful, and you’ll need a car to experience most of it. I recommend Discount Hawaii Car Rental. You’ll find the best prices on rental cars in Hawaii.

Trust me, you don’t want to wait until you arrive and pay “tourist prices” at the airport when you realize that you need a car.

In 2021 there has been a serious shortage of rental cars after many rentals were taken off-island during the closures of 2020. Makes sure to reserve a car early to avoid any problems.

Even on Oahu where excellent public transportation exists, you’ll still want to venture out on your own and explore. Some visitors think they won’t need a car, and then spend more money later to get one.

Just trust me that unless you’re spending two days in Waikiki only, you’re going to want a car! Check out my “Do you need a rental car in Hawaii” post or check out Discount Hawaii Car Rental and reserve your car now.

8. DON’T FORGET THAT YOU’RE ON “ISLAND TIME” IN HAWAII

Things tend to move a little slower in Hawaii, and that’s okay. You’re on vacation, so lose your mainland “go go go” attitude and relax.

Most of the speed limits in Hawaii aren’t over 55 miles per hour if that. It’s always a good idea to plan out your days, but remain flexible and try not to rush.

9. DON’T BE AN AGGRESSIVE DRIVER IN HAWAII

Most people in Hawaii are friendly drivers; it’s part of the Aloha spirit. Don’t be an aggressive driver, honk your horn at everyone, etc.

As one commenter pointed out, it is a little different on Oahu. There is definitely more traffic on Oahu, and a bit more road rage.

However, in general, drivers in Hawaii are friendlier than average. On the flip side, locals know the roads better than you do. If you are enjoying the sights but see cars lining up behind you, pull over and let them pass.

10. DON’T BE RUDE TO YOUR RESTAURANT SERVERS/BARTENDERS ETC.

Again, this is something else that shouldn’t have to be said, but it does. Most people in the service industry are paid very little, work very hard, and rely on tips to make money. Just don’t be rude.

Many of those in the service industry also had a very rough year in 2020, so again, just be nice! It takes nothing away from you to be nice to another person.

Here we go. There are two parts to this one. First, Hawaii is part of the United States, so don’t be weird and act like it’s a third-world country. Everyone speaks English, and it’s overall a very safe place to visit.

Second, the history of Hawaii becoming part of the U.S. is very complicated, and some locals aren’t happy about it, so try to be conscientious of that.

Germs aside, it will get expensive renting snorkeling gear over and over. If you plan to snorkel often, bring your own set.

13. DON’T FORGET THAT THERE ARE ALTERNATIVES TO HIGH-END RESORTS

Hawaii has all kinds of accommodations for every budget. From campgrounds to Airbnb condos to boutique hotels to the Presidential Suite at the Four Seasons.

If you’re celebrating a honeymoon or anniversary, check out the best resorts in Hawaii for honeymoons.

No matter what your budget, you can probably find something Expedia. They also have vacation rentals, so if a condo is what you’re looking for, you also have that option.

You can also check out the Farmers Markets for local produce. If you’re on the Big Island, make sure to tour a coffee plantation for Kona coffee.

You can also get great smoothies and juices made from local fruits. My favorite is Kauai Juice Company on Kauai which sources as much local produce as possible.

Checking out a Hawaii pineapple farm is another fun activity. Check out my post about where to find pineapple farms in Hawaii if it’s on your must-do list.

15. DON’T SPEED OR USE YOUR PHONE WHILE DRIVING

You really shouldn’t do these things anywhere, but don’t do them in Hawaii either.

Using your phone while driving is illegal. It’s also good to remember “island time” as I mentioned earlier, most people aren’t in a hurry, and you shouldn’t be in a hurry either.

16. DON’T FORGET TO GIVE YOURSELF AMPLE AMOUNTS OF TRAVEL TIME

Fifty miles in Hawaii isn’t the same as 50 miles on the mainland on an interstate. Depending on where you are, driving 50 miles will likely take an hour, and maybe much longer.

Make sure to do your research and know-how long travel will take and plan accordingly.

The Hana Highway or Road to Hana is an experience that takes a few hours, but did you know it’s only 45 miles from Paia to Hana?

If you’re planning a Maui vacation, don’t miss 50 things to do in Maui. There are plenty of spots on the Road to Hana that made the list.

You know, the signs that say “sharp coral” or “strong current” or “60 people have died here.” If there are a lot of warning signs on a beach, you can always try another beach.

The same goes for a hike; if a trail is closed, there is probably a reason for that! Don’t risk your life for an Instagram photo.

18. DON’T LITTER, SMOKE ON THE BEACH, BE DISRESPECTFUL, ETC. IN HAWAII

Should I have to mention this? I will say it anyway. Smoking on the beach is illegal in Hawaii, so don’t do it. Also, make sure to pick up after yourself. Hawaii is a beautiful place, and everyone would like to keep it that way.

On the subject of being respectful, don’t trespass on private property. Stay away from areas that say Kapu, which can translate to “keep out,” “no trespassing,” “sacred,” etc.

I’ve had a few people ask me about incidents they’ve read about online with tourists having problems with locals. 99% of the time the tourist was trespassing, littering, or being disrespectful to local culture in some way.

Take a few minutes to learn about Hawaiian culture before your vacation to avoid any issues like this.

You can check out my ten things to know before going to Hawaii post for more information. 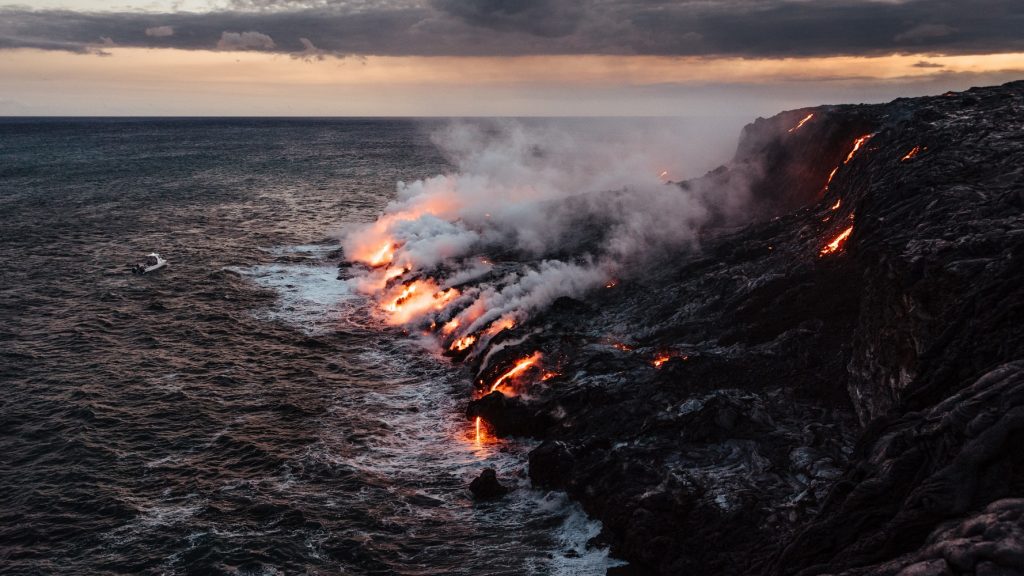 If you have the opportunity to see active lava, don’t touch it. Just don’t do it. This is obvious, right?!

That said, if you have the opportunity to see active lava on the Big Island, you should definitely do it!

Many visitors think that there is always active lava on the Big Island, but that isn’t true. The best way to find out about active lava is to check Hawaii Volcanos National Park website. 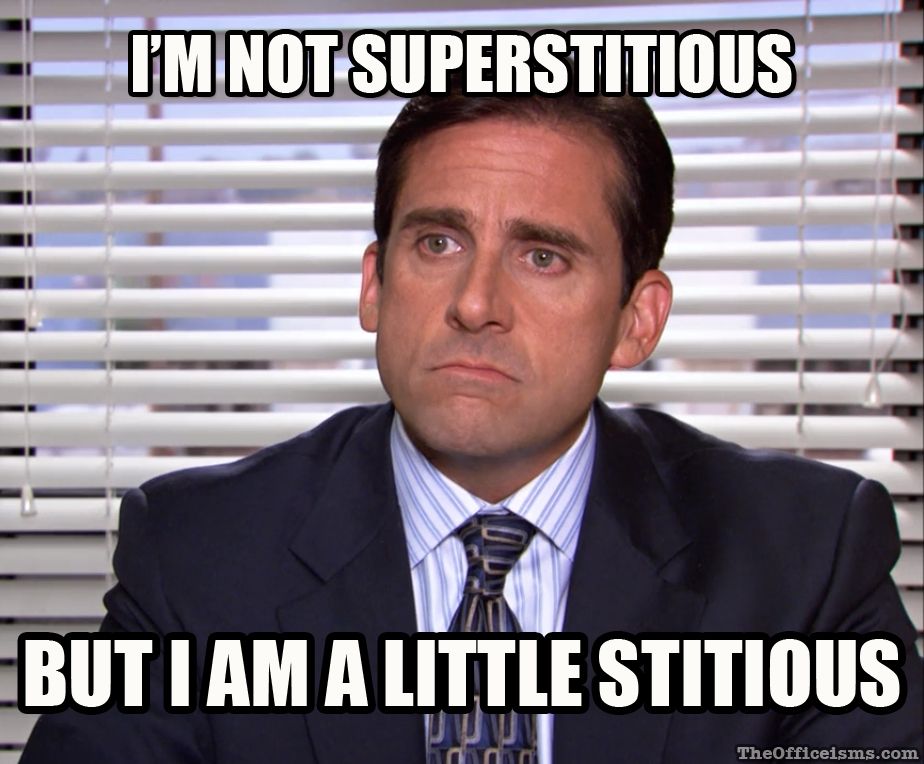 Lava rocks might seem like a great souvenir, but legend has it that you’ll be cursed if you take it home. The elements return to Hawaii is the only thing that will lift the curse.

You might roll your eyes, but the post office sees hundreds of lava rocks, sand, and other materials returned to Hawaii every year! Better safe than cursed, right?!

The Most Adventurous Things to Do in Hawaii