Vienna, Austria, one of the most beautiful and culturally diverse cities in Europe, is often listed as one of the best cities in the world to live in because of the excellent quality of life.

Here are some important tips when planning your trip to Vienna to make the most out of it.

1. When To Visit And How Many Days Should You Plan

Vienna has a similar climate to Boston, with a distinct four seasons. April, May, and June are pleasant months to visit with many public gardens and parks in full bloom and the outdoor cafes buzzing with locals. Much of Vienna empties out during July and August when the Viennese take their annual vacations, but tourist attractions are still heavily booked, so make sure to make your reservations and purchase your tickets in advance. September and October are ideal weather months with crisp temperatures, and you can comfortably navigate the city.

If you don’t mind temperatures in the low 30s Fahrenheit during the day, Vienna is a magical place during the Christmas season. Starting at the end of November and ending on New Year’s, there are over a dozen spectacular Christmas markets all over the city, many with local artisans selling handcrafted merchandise, holiday ornaments, crafts, and hand-knitted sweaters and accessories. Food and drinks are also a big part of the markets, and you can enjoy treats such as mulled wine, hot chocolate, giant pretzels, sausages with mustard, candies, and cookies, and beer on tap.

The streets of Vienna during holiday time are festively decorated with ornate light displays and Christmas trees. There are lots of holiday entertainment including choirs, special Christmas concerts, operas, and dance performances of Swan Lake and The Nutcracker.

Pro Tip: If you go to Vienna during the holiday season, best to go the first two weeks of December to avoid the local crowds. Vienna can easily be done in 3 to 4 full days, but 5 days would be ideal. 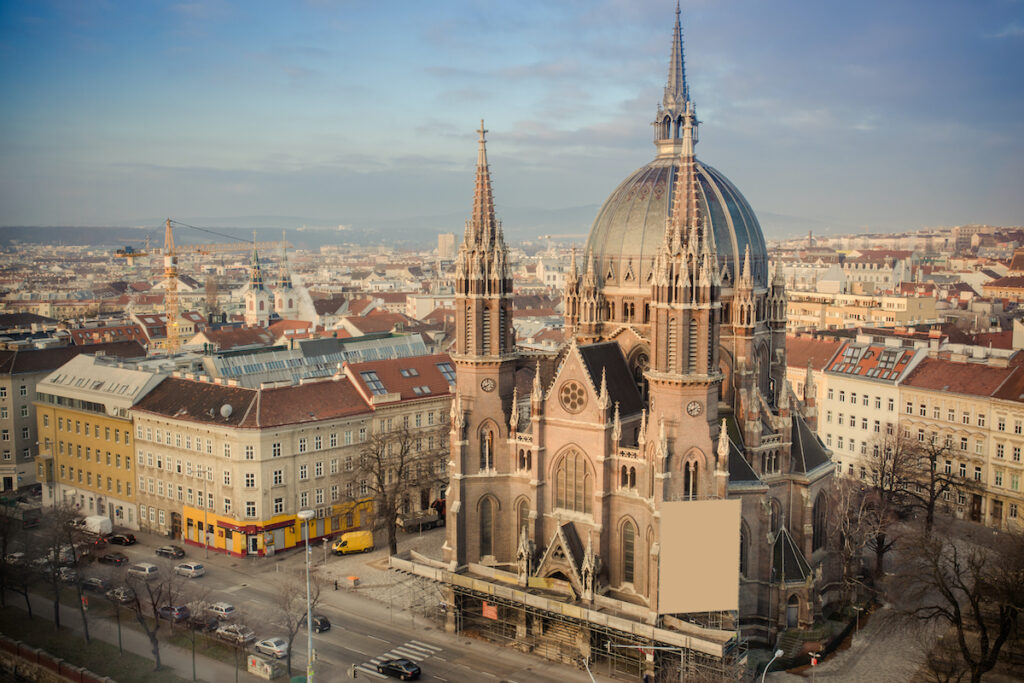 When I visited Vienna, I ordered the Vienna Pass, which was indispensable during my 3-day visit. The pass included entrance to over 60 attractions such as museums, palaces, and castles, free hop on hop off bus service around the city, guided tours, and river cruises. I saved lots of time bypassing the lines at popular sites including the Beethoven Museum and House, Schoenborn Palace, the Jewish Museum, the Belvedere Palace, and Schubert’s birthplace, plus a free river cruise on the Danube. There’s also an option to add a public transportation pass, which I highly recommend. The best deal is the 3-day pass for $125.10 per person.

Vienna is a top destination for classical music with a plethora of concert halls, recital venues, opera houses, and music halls. The Viennese are passionate about their live music and there are more than 15,000 concerts a year of all types of music.

The Vienna Boys Choir is a worldwide sensation, traveling the globe with their young talent, and from September to June they perform at the Holy Mass in the Hofburg Chapel. They also perform at the Muth concert hall where they perform in operas and also recitals on Friday afternoons. 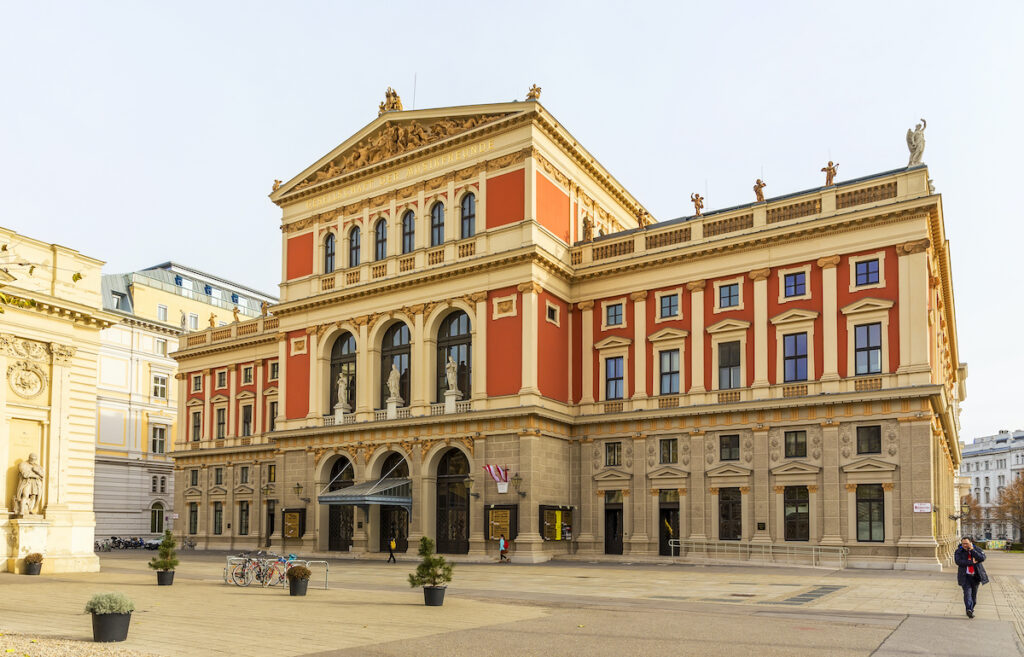 The Musikverein is the premiere music hall in Vienna and where the top classical orchestras and musicians appear. The Vienna Philharmonic plays a special New Year’s Eve concert which is broadcast to an international TV audience. In addition to the main hall, the Musikverein has four other music halls in the same complex where other types of music and performances are offered including jazz concerts, spoken word performances, lectures, and 230 concerts a year catering to a young audience. Every day but Sunday, the Musikverein offers guided, 45-minute tours in English and German.

Another fabulous tradition in Vienna is the ball season, which is considered the 5th season, running from mid-November until March. There are over 450 balls you can attend, all with different themes and various types of dances. Prestigious balls include the Confectioners Ball, where you not only dance in a palace, but leading bakers of the city serve cakes and pastries. The Vienna Opera Ball is where champagne is served and you can listen to some of the best opera singers in the country. At the Vienna Philharmonic Ball, you dance to the music of one of the best orchestras in the world, and the special Concordia Ball, held in September in the stately Vienna City Hall and its courtyard celebrates the freedom of the press.

Concerts and balls sell out quickly so make sure you book your tickets ahead of time. 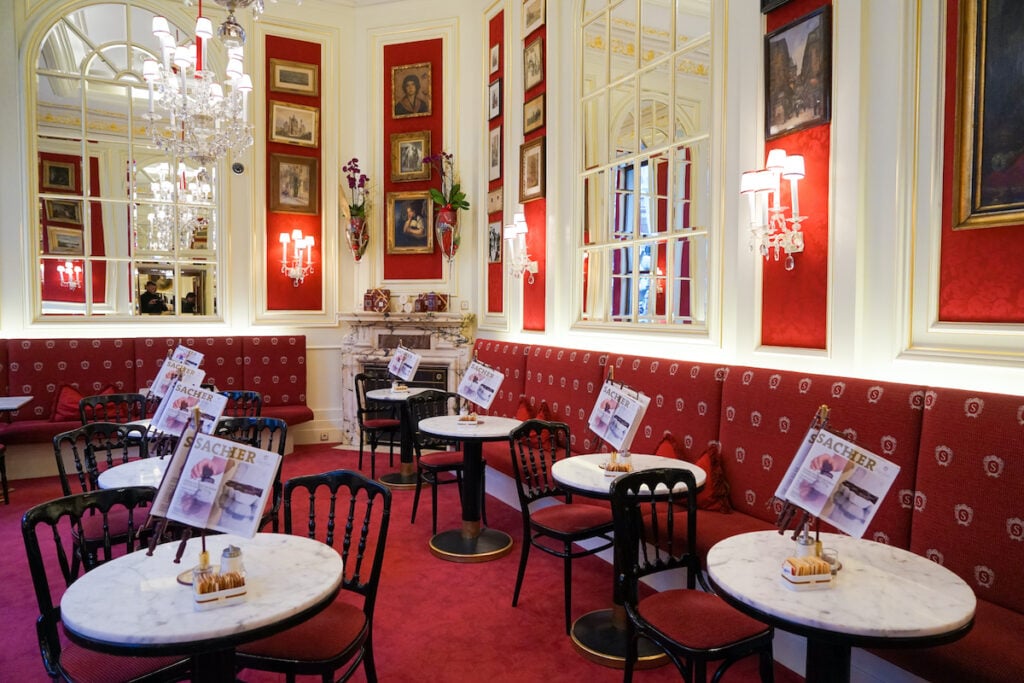 No visit to Vienna would be complete without visiting at least one of its legendary cafes with sumptuous and decadent pastries.

The Sacher Hotel is where the famous sacher torte was invented. Indulge in a slice of the dense chocolate cake at its posh, Sacher Eck Café, decorated with red, satin velvet banquettes, elegant bentwood chairs, and black and white marble floors.

For the best apple strudel in town, Museum Café serves it warm with a choice of either vanilla sauce, fresh whipped cream or vanilla ice cream. The old-world-style café (it was first opened in 1899) has red velvet chairs and sofas, daily newspapers hanging on racks, wood herringbone floors, and high ceilings. Like most traditional Viennese cafes, coffee is served in a white china cup on a metal tray along with a delicate pitcher of warm milk, and a glass of water. 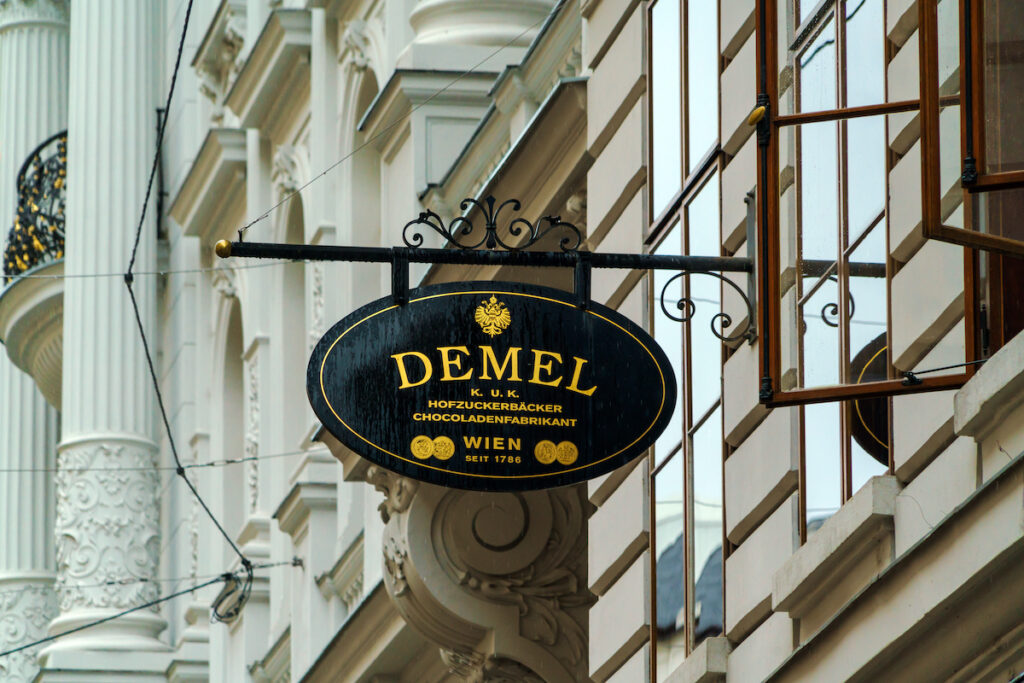 My personal favorite café is Demel, which is also a local favorite. Demel is a turn-of-the-century combination café, restaurant, and confectionery shop and you will be hard-pressed to only choose one dessert or pastry from the insanely long menu that includes sacher torte, cookies, biscuits, cakes, strudels, and kugelhopf. They also serve lunch and one of its specialties is wiener schnitzel.

Unlike the U.S., stores have limited hours in Vienna. Most shops are open 9 a.m. to 6:30 p.m., and on Saturdays, shops close either 5 p.m. or 6 p.m. Almost all shops are closed on Sundays and holidays except for the train stations and museum shops. Museums mostly open from 10 a.m. to 5 p.m., with a late opening one night a week, and are closed one day a week, usually Monday or Tuesday.

The currency in Vienna and all of Austria is the euro. The current exchange rate, as of today, is 1.18€ to a USD.

Most establishments, including shops, bars, restaurants, museums, and hotels accept credit and debit cards. American Express is not widely accepted in Europe, so best to use your Visa or Mastercard.

If you prefer to use cash, the best exchange rates are at the ATM bank machines and the fees are usually minimal, $3 to $5 per transaction.

In Vienna, it’s customary at restaurants, cafes, and bars to leave 5 to 10 percent tip of your final bill (tax is already included) in cash. For taxi drivers and hairstylists, 10 percent is good. Tipping at your hotel is optional and not required.

German is the official language of Vienna and Austria, but English is widely spoken at shops, restaurants, museums, tourist attractions, and hotels.

The phone prefix/country code for Austria is +431.

The electrical current for Austria is 220v.

Vienna is a magical city throughout the 4 seasons. Pick your time to visit to match the activities you want to experience.