In particular, Quedlinburg is famed for it’s 1,300 Romanesque half-timbered houses and later Art Nouveau villas and, of course, the Quedlinburg Romantic Road leading to the Quedlinburg Renaissance Castle, the Collegiate Church of St. Servatius and the town’s cathedral housing the Quedlinburg treasure. No need to ask why the road has this name — though we would say the entire city is one of the most romantic places in the world!

All of this – and more – fuses to create one of the most beautiful medieval towns in Germany, deserving of its UNESCO World Heritage listing and a few days visit if you are traveling around Germany! As I said – It’s worth it, but in case you’re not convinced yet, here are a few things to do in Quedlinburg, Germany!

How do you even pronounce it??!

Well, Quedlinburg (pronounced Keed-lyn-berg) is an exceptionally preserved medieval European town filled with timber-framed buildings, churches, windy lane-ways, and a castle on a hill. Admittedly all reasonably standard for Europe, but the degree to which this has been preserved is astounding and like nowhere else.

You feel like you have been transported back to when the town was a prosperous trading town since the Middle Ages, especially at the Weihnachtsmärkte (Christmas markets), and that at any moment, a bard will break into a tale or the city bells will announce invaders. Hmmm well maybe not — but you get the idea!

Quedlinburg can best be accessed by regional trains from Hanover or Berlin, but being located in the Harz mountains (and the relative seclusion is part of the allure), it does take about 4 hours each way. I would recommend a one night, or two night stay as I did at the Hotel Garni Am Dippeplatz, a gorgeous 13th-century half-timbered house in the center of the old town, in one of the oldest streets of Quedlinburg (and one of the cheapest stays in city).

One of the highlights of my winter trip through Germany – especially as there are way more things to do in Quedlinburg than I ever expected. Screen Shot 2015-12-04 at 10.59.02 pm
When you come here, you are instantly submerged in seven centuries of half-timbered architecture and more than a thousand years of German history and magic in this unique medieval town.

The castle-hill and the Münzenberg,” the Old Town and the historical New Town – There are so many significant sights here to draw you in. It is difficult to separate out such a rich and diverse collection of attractions, but I will make an attempt below to convince you of why this should be on the stop for the next trip to Europe with just a few of the things to do in Quedlinburg Germany! Things To Do In Quedlinburg: Germany’s Medieval Treasure Town 🇩🇪

The Quedlinburg New Town uses the term rather loosely as, in fact, it started to develop around 1,200 AD, and the city spilled out over the walls of the old city. Remarkably different – the residential dwellings here consisted of large entry gates and even larger inner courtyards to accommodate crop storage space and livestock.

Some of the main must-see sights in Quedlinburg New Town are the St. Nikolai Church, The City Towers, and the New Town Churchyard – though, like most of the city, half the joy is simply in wandering aimlessly and discovering the beauty of Quedlinburg for yourself! The Quedlinburg Old Town offers everything you need to create the most beautiful medieval town in Germany, and to be honest, at times it looks just like a movie set.

Get lost in long, unending cobblestone lanes, admire the timber buildings towering above you, get snap-happy with all the different architectural styles, and count just how many churches you can fit into one town.

Towering over the historic town, the Castle-Hill is one of the blatantly obvious things to do in Quedlinburg, and yet it is easily one of the best! Besides offering the best view of Quedlinburg and some of the best photo opportunities, the thousand-year-old Romanesque collegiate church St. Servatius.

Towering high above the old town on a sandstone cliff, the collegiate church St. Servatius.just begs to be explored along with the famous collection of the Quedlinburg church treasures that have been housed within it’s protected vault for generations – and on display since 1993.

One of the top things to do in Quedlinburg is to visit the Münzenberg Museum, which housed the Convent of St. Mary (Marienkloster) until 1525 when an uprising of Peasants occurred, and the site was left to decay.

Reclaimed by various groups over the ages, which is left now, is a selection of rift-raft tiny half-timbered houses laid directly on the ruins, making it charming to explore and learn about the intriguing history of the Münzenberg.

The half-timbered buildings of Quedlinburg not only adds to the charm of the medieval town but also its uniqueness that led to Quedlinburg being inscribed on the UNESCO World Heritage Site.

Because of the uninterrupted progress on half-timbered architecture in Quedlinburg, it is possible to explore the history and to change construction styles over the ages just by wandering from street to street. With the oldest half-timbered houses in Germany, this alone is a reason to visit Quedlinburg!

If the seasons allow, then one of the top things to do in Quedlinburg Germany should be to visit the famous Quedlinburg Christmas market in December.

During this time, the town is magically transformed into a Christmas dreamscape set around the historic town square and offer’s temptations for all the senses. Every public space seems to be alive and humming, and the timelessness of Quedlinburg really comes on display. Everybody seems to be out laughing, snacking on Pretzels, and drinking Glühwein. 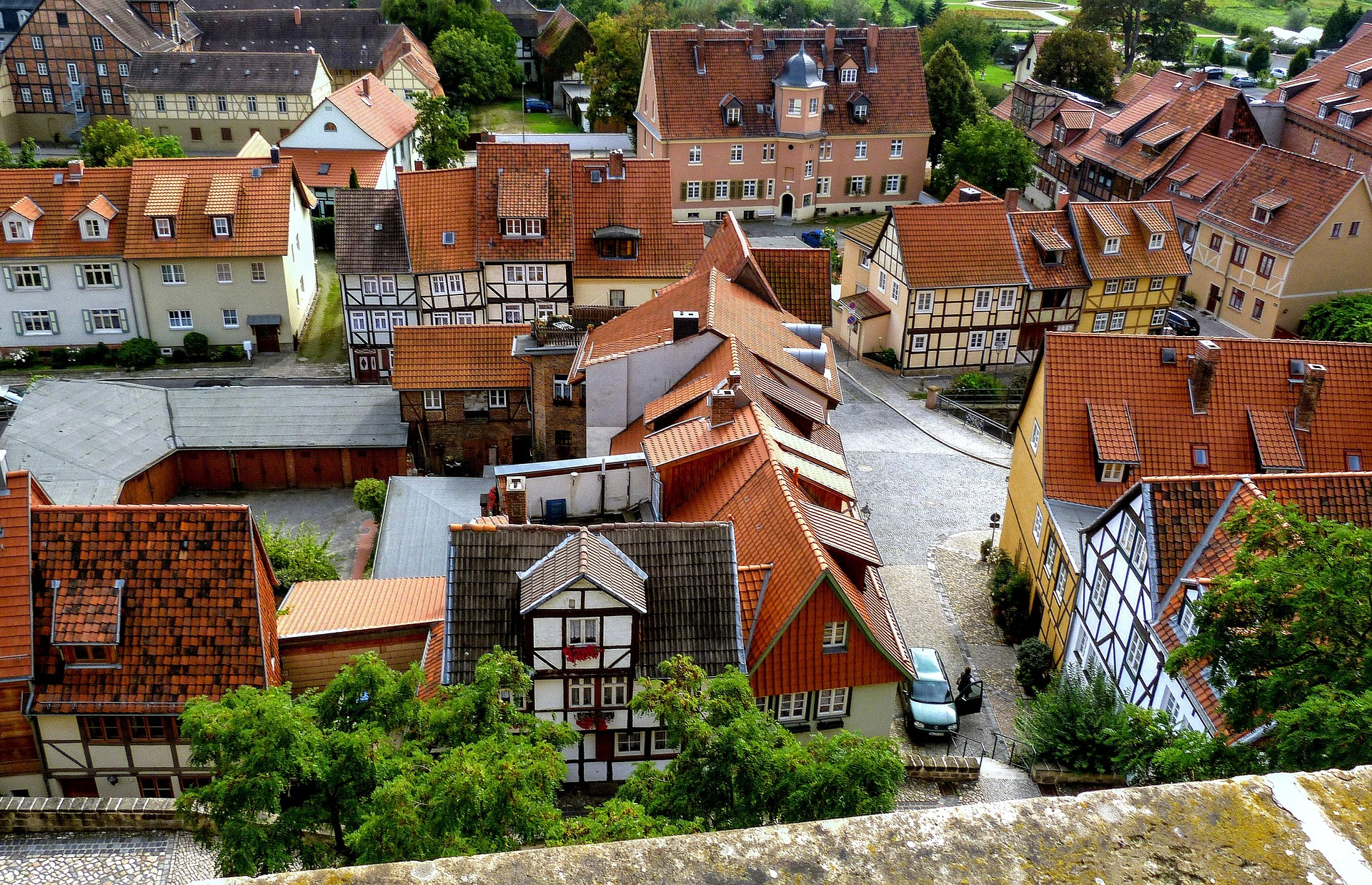 Ok — so the Quedlinburg Christmas market is only on in December but deserves mention as it still those on a winter get-away a reason all of their own to come! This city is so incredible and perfect; photos can only show so much – When you are here, it feels like you are on a movie set or a theme park.

It is unbelievable that people actually live and work here every day, but they do! It’s a bit of a secret treasure at the moment though, mostly unknown outside of Germany, so be sure to add this to your hit list of European ‘must-dos on your next trip and live it up like a medieval king!