Switzerland has a reputation for being, above all, beautiful. But it’s also known as being somewhat safe. Well, this list of traditions, customs, festivals, and obscure sports challenges that reputation. Many of these rituals are linked to the change of seasons, ancient folklore, or rural history. Some are modern-day myths in-the-making. With a constant mountain backdrop, they cover the length and breadth of this country and would provide a highlight of any trip to the Alps. 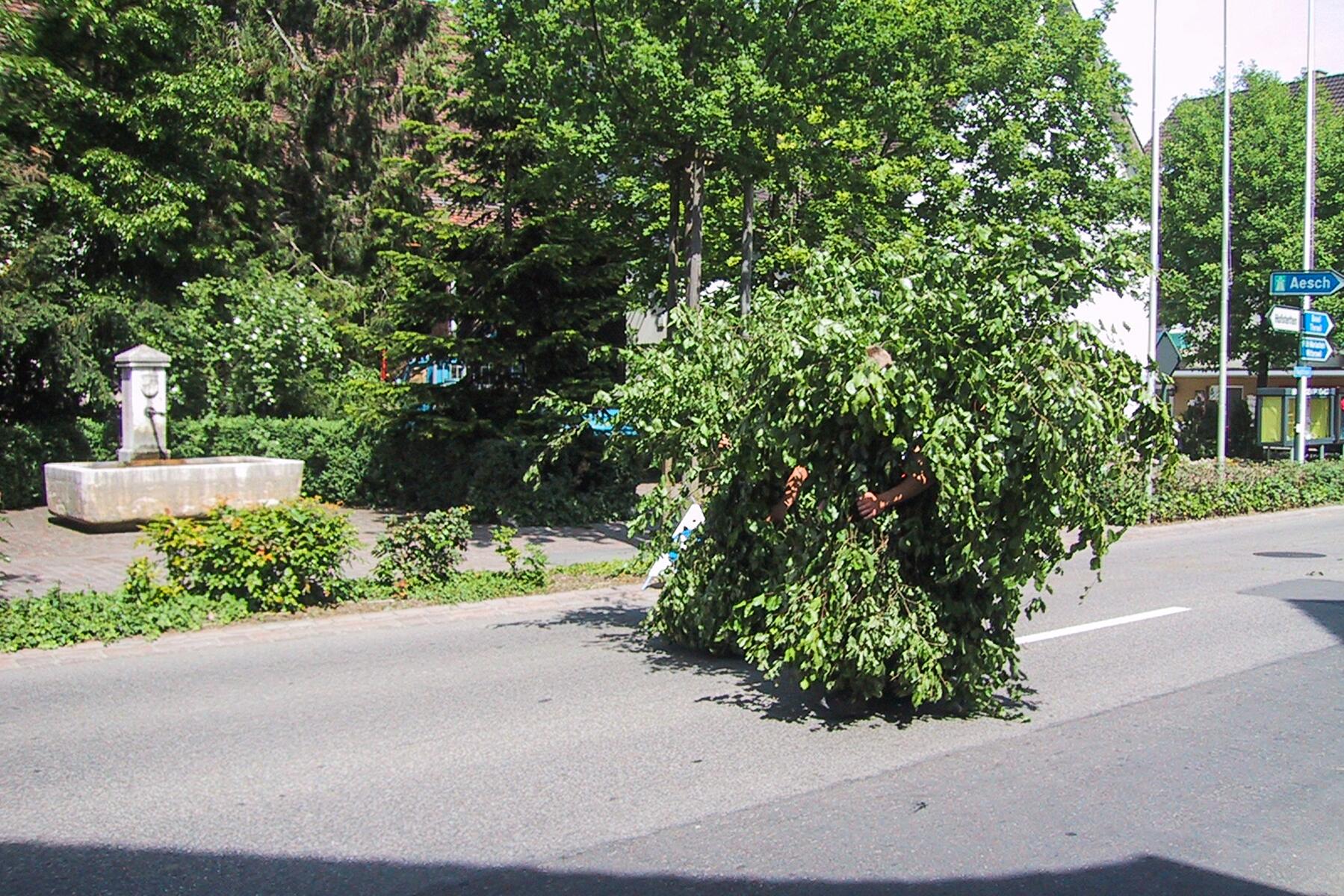 The small community of Ettingen describes itself as “a green village at the foot of the blue.” It’s perhaps appropriate then that as part of an ancient fertility ritual the local men take to dressing up as bushes.

Like many of Switzerland’s odder traditions, Pfingstbluttlern is linked to the Christian calendar, taking place on Pentecost, the 49th day after Easter Sunday. Channeling the spirits of the forest, the town’s men run around, accosting local women and dunking them in drinking fountains. The ritual is little known, even within Switzerland, but had a moment of fame when a Vice article about it went viral in 2014. 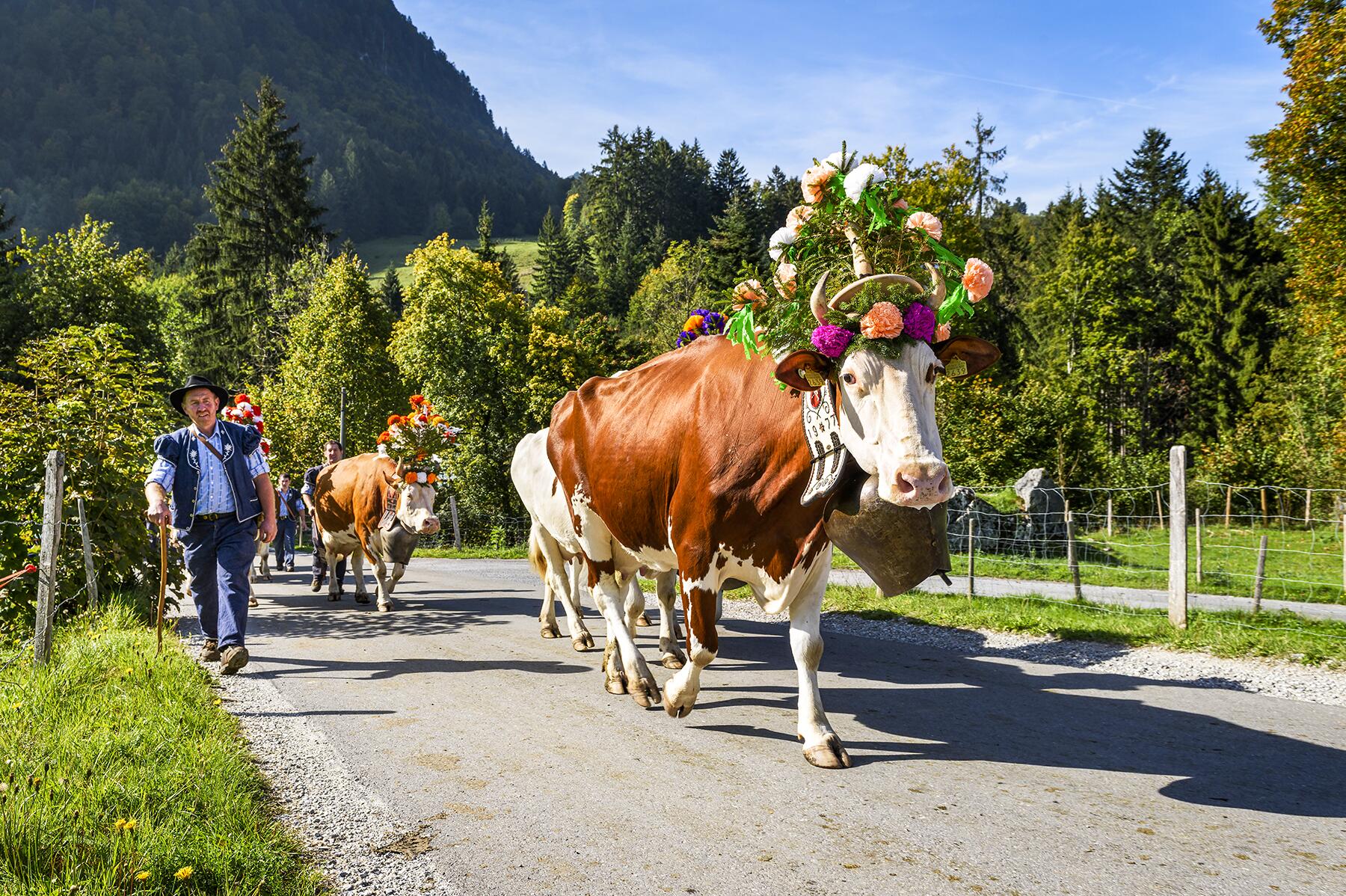 This annual event is one of the highlights of the year in Switzerland. At the end of the summer season, cow farmers bring their livestock down from the hills, and into the local villages. The cows themselves are adorned in floral head-dresses and wear enormous cowbells. They can be heard from miles off. They leave their meadows early in the morning, herded by farming families in their own traditional dress.

These descents take place in villages across the whole country during September, before the first frosts hit at the high altitudes. With good timing, you could see four or five different descents over a number of weeks.

The villages will host market stalls, live music, and food stands. Expect to chow down on a bratwurst to the sound of accordions, and clink glasses of beer with lederhosen-wearing locals. 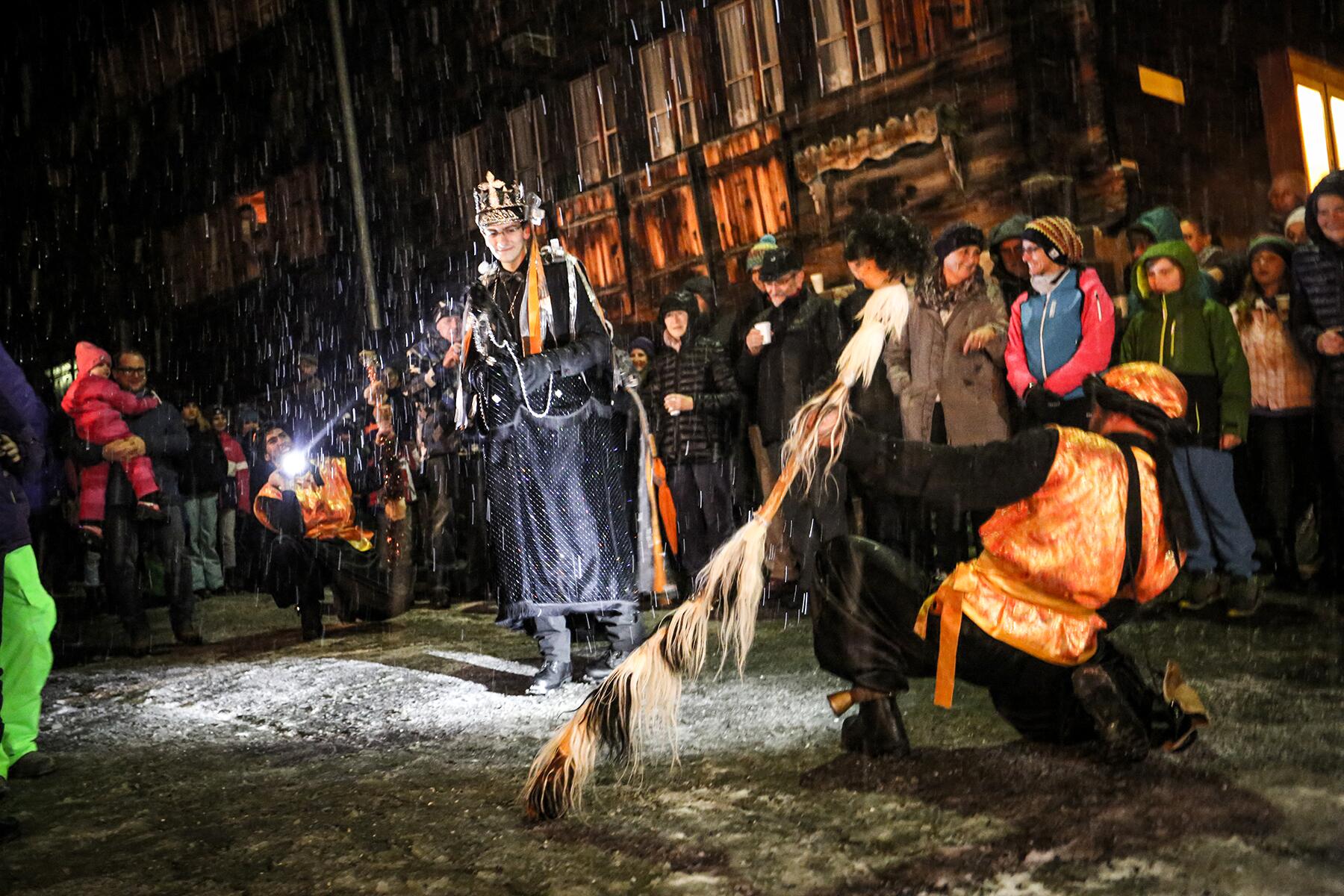 In the dead of winter, on the Saturday known as Epiphany, the peace of the Lötschental valley is broken by the sound of bells. A procession of three boy kings, accompanied by their jesters (Goigglárn), and pantomime horses move through the valley’s villages.

The jesters dress wildly, with props including sticks adorned with (toy) animal heads. The king is paraded and introduced to onlookers, a choir sings New Year songs, and the procession is invited to eat en route.

The Lötschental is the source of many ancient customs, and this is perhaps one of the most at risk of disappearing, as it requires younger generations to carry the mantel. 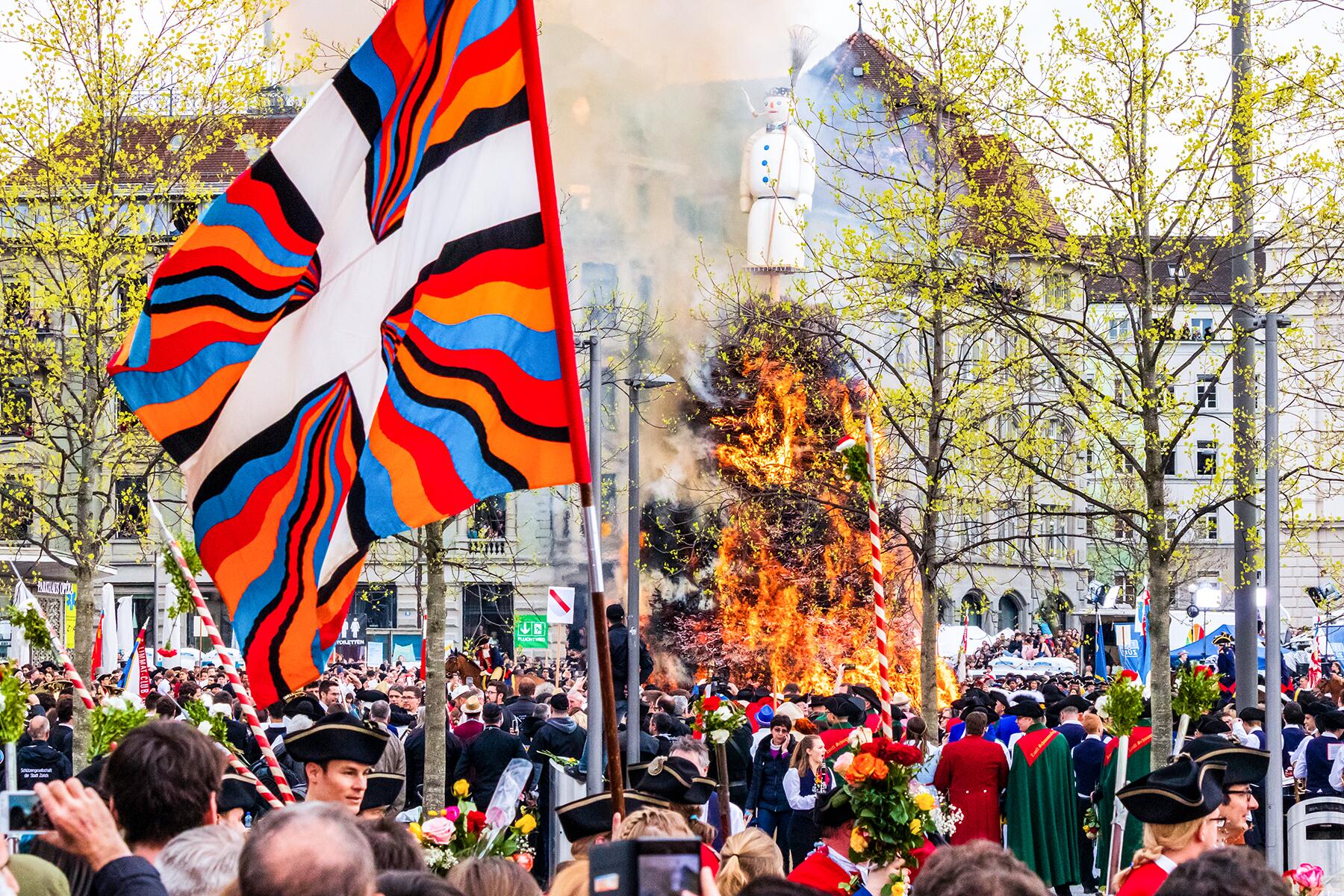 At the start of Spring, Zurich’s ancient guilds parade through the city on foot and horseback, wearing ancient traditional uniforms. The procession passes rows of benches where locals wait with baskets of flowers; when they see a guild member they admire they will run up to them and gift a flower.

The march culminates in the main square, Sechselautenplatz, where a huge bonfire is lit. Atop of the pyre is an effigy of a snowman—called the Böög—stuffed with explosives. The legend goes that the longer it takes for the explosion to occur, the worse the weather will be in Spring. Huge crowds gather to watch this event and then partake in a sausage grill on the embers, once the Böög has exploded. 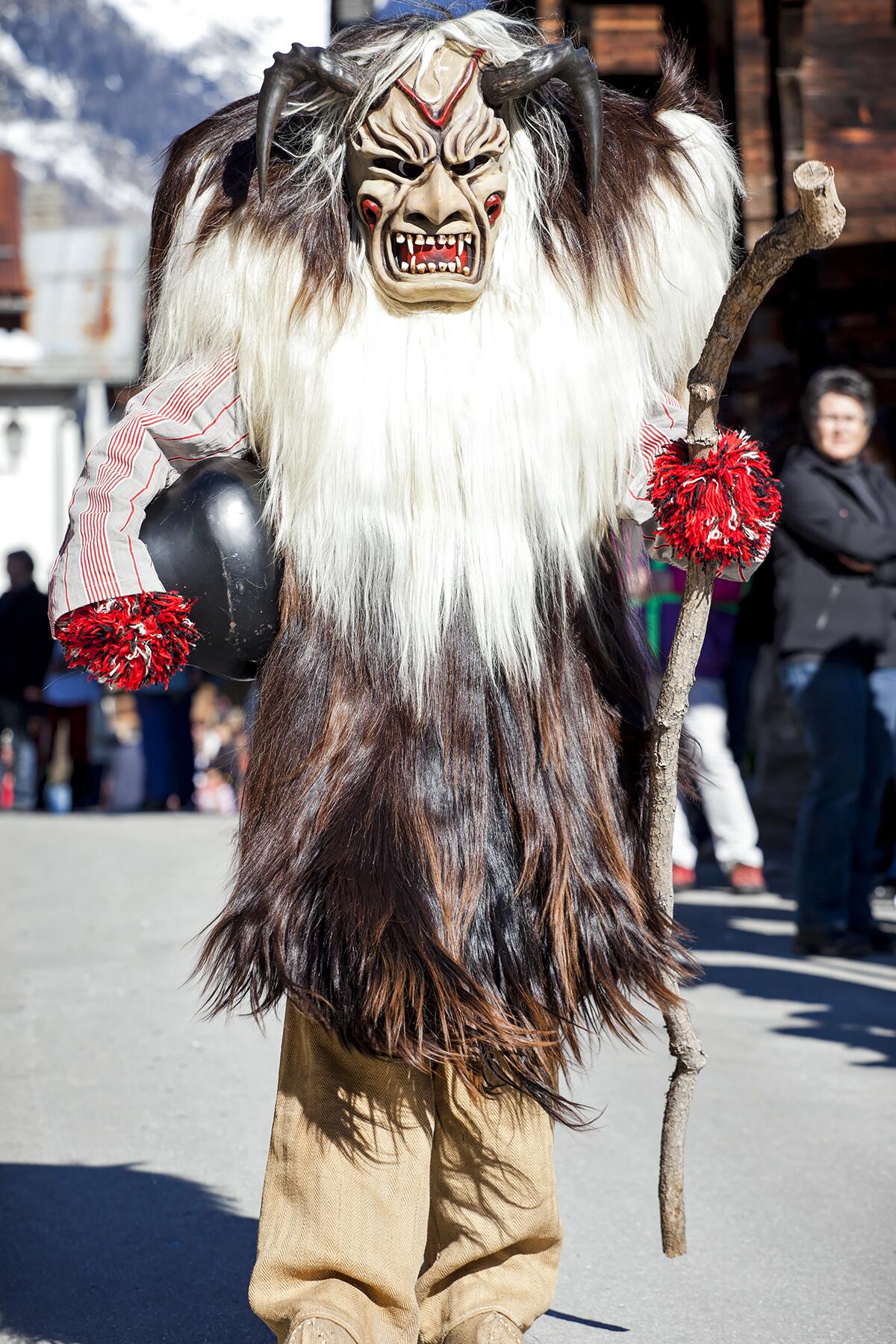 Fur-laden beasts wearing terrifying masks of skulls with gnashing teeth, and wielding sticks maraud the villages of the Loetschental valley in February. The coming-of-spring festival (known as Fastnacht elsewhere in Switzerland) takes on a darker form in this remote valley.

In a bid to stay completely anonymous, these “Tschaggatta” wear their feet in sacks to hide the identity of their shoes; their masks are made from local pinewood, and they’re covered in sheep or goat leather.

WHERE: Various Locations Throughout Switzerland 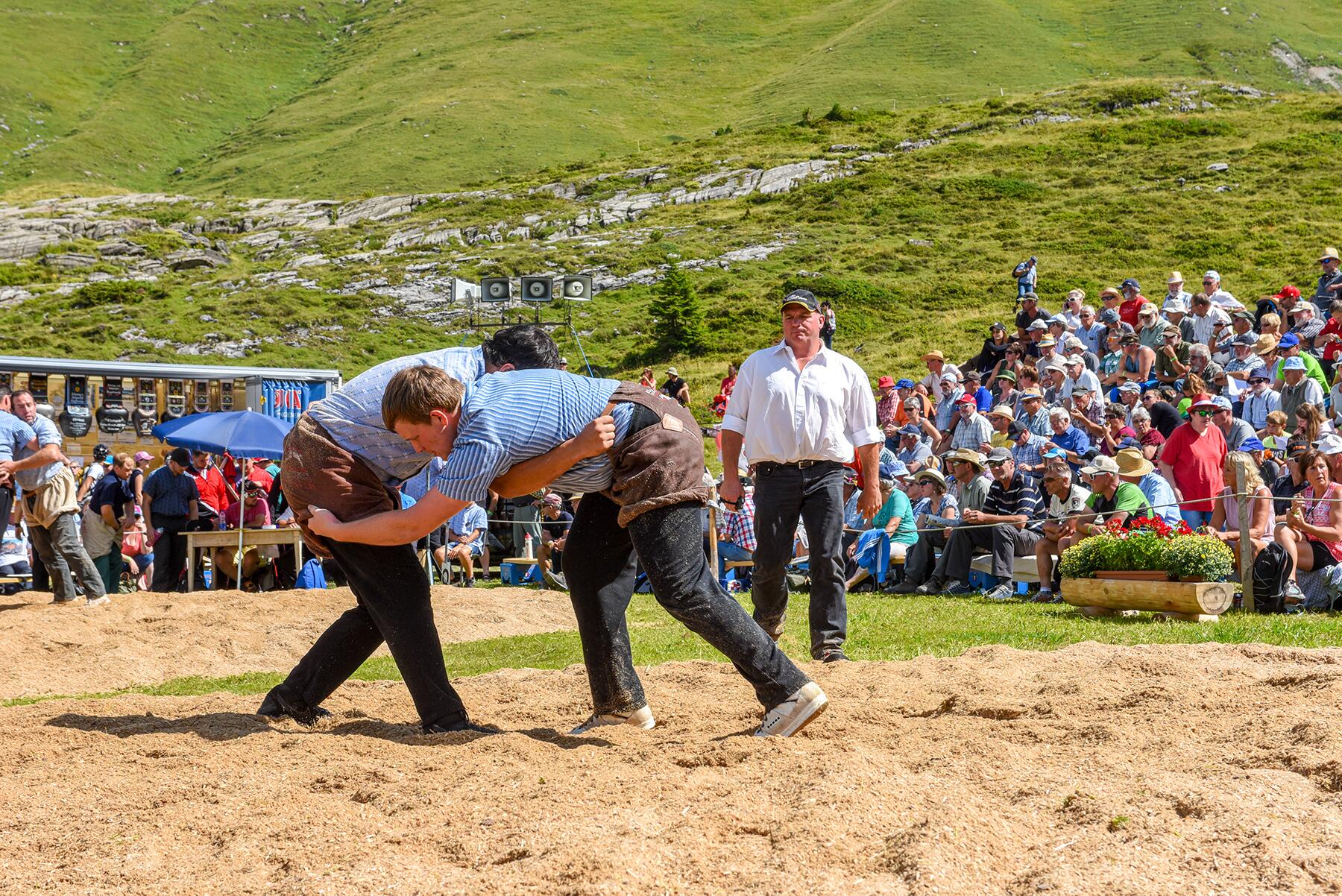 The traditional sport of Alpine wrestling is a grueling duel of strength and endurance. Wearing cloth shorts, schwingers grapple with each other aiming to land their competitor on their back. The battle takes place in a circle of sawdust, often located in a spectacular high-alpine meadow.

Schwingen is undertaken by both the strapping farming men of Alpine villages, as well as urban participants. After a rise in popularity this century, Schwingen has gone on to become Switzerland’s de-facto national sport. Whilst the official prize is a bull, the champion can go on to win sponsorship and endorsement deals from brands. 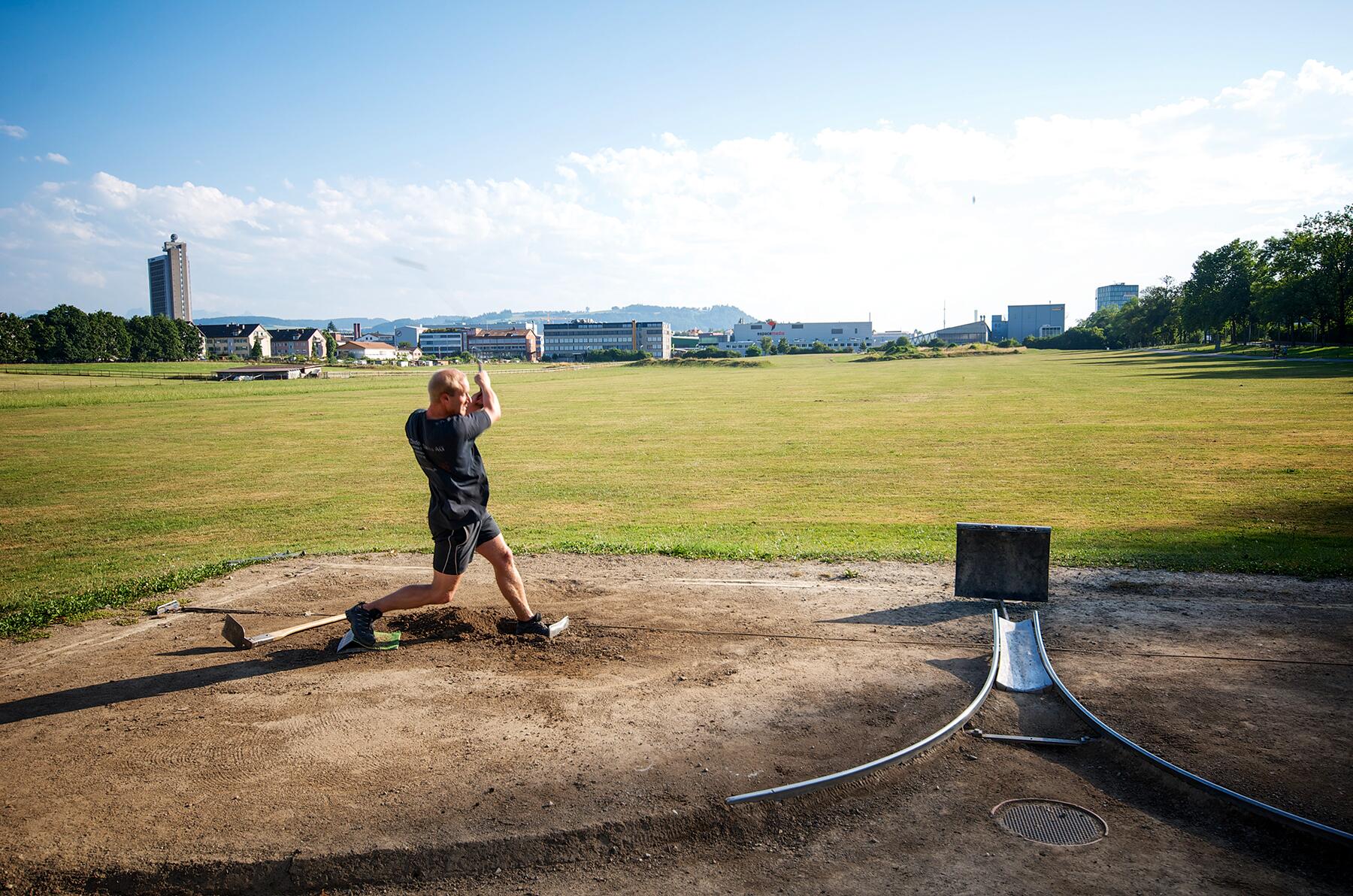 A hybrid of golf, baseball, and discus, this rural sport is traditionally played in the countryside of the Emmental region. The name itself comes from the German for the hornet, which also gives its name of the puck (nouss) which creates a buzzing noise when hit. The sport has been dated back to the 1600s and became popular in the Emmental region (yes, like the cheese).

The nouss is placed on a steel ramp and hit at an incredible velocity by the whip-like stick. Once it takes off, the puck can reach 186 miles per hour. The further the nouss flies, the more points the team gets, but it’s up to the opposing team to stop the nouss landing, which they do with huge paddles. The game is played between two teams of up to 20 players and can last for up to four hours. 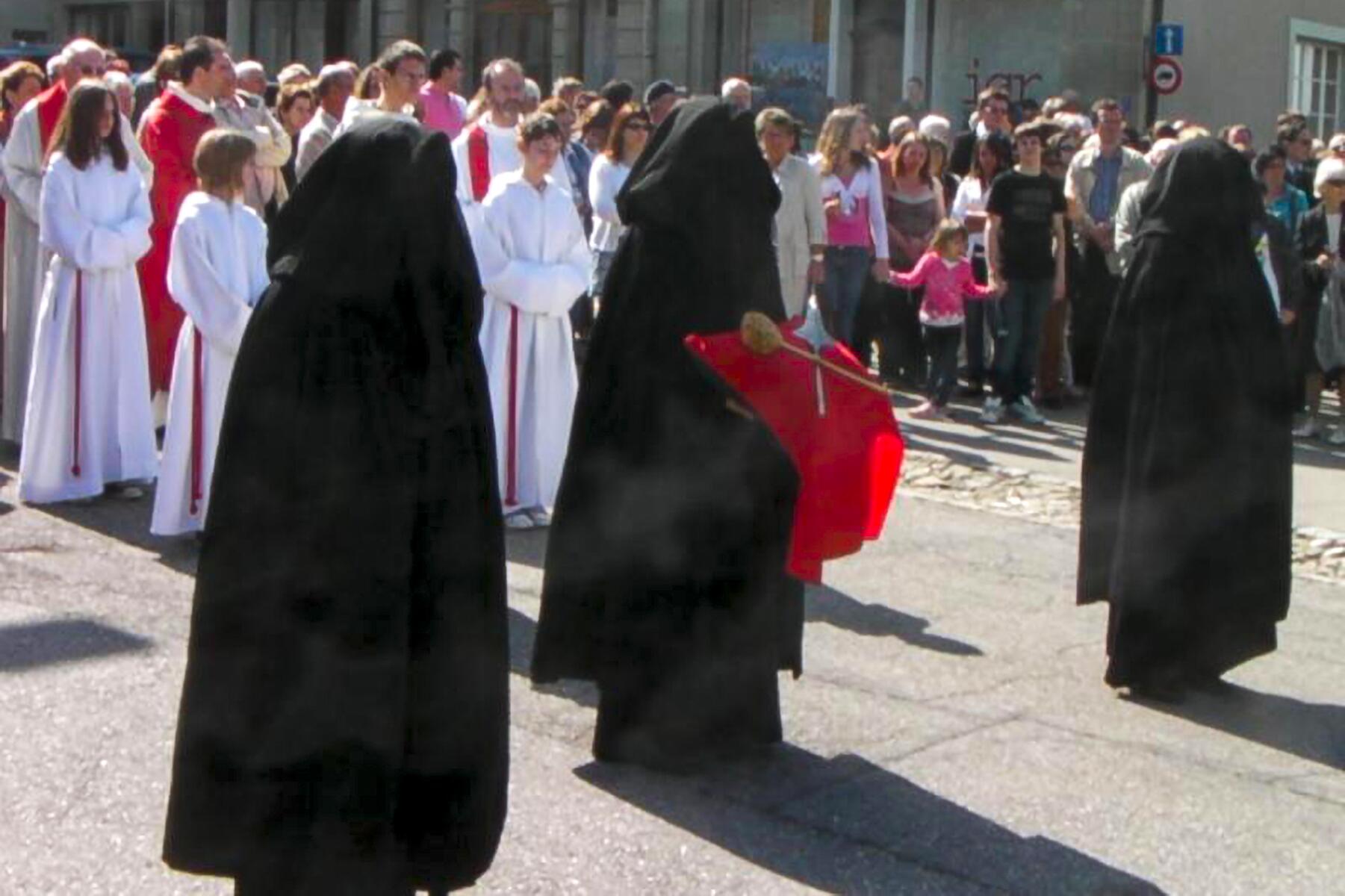 On Good Friday, women dressed in black veils walk slowly through the town of Romont. A cross-bearer wearing black cloth leads the procession of 20 “wailing women.” The women carry with them items such as a crown of thorns, nails, and a whip placed upon blood-red pillows—all to signify the crucifixion of Jesus Christ. The church choir sings as the parade moves through the town. The parade is a somber affair, fitting for this hilltop village steeped in gothic history. 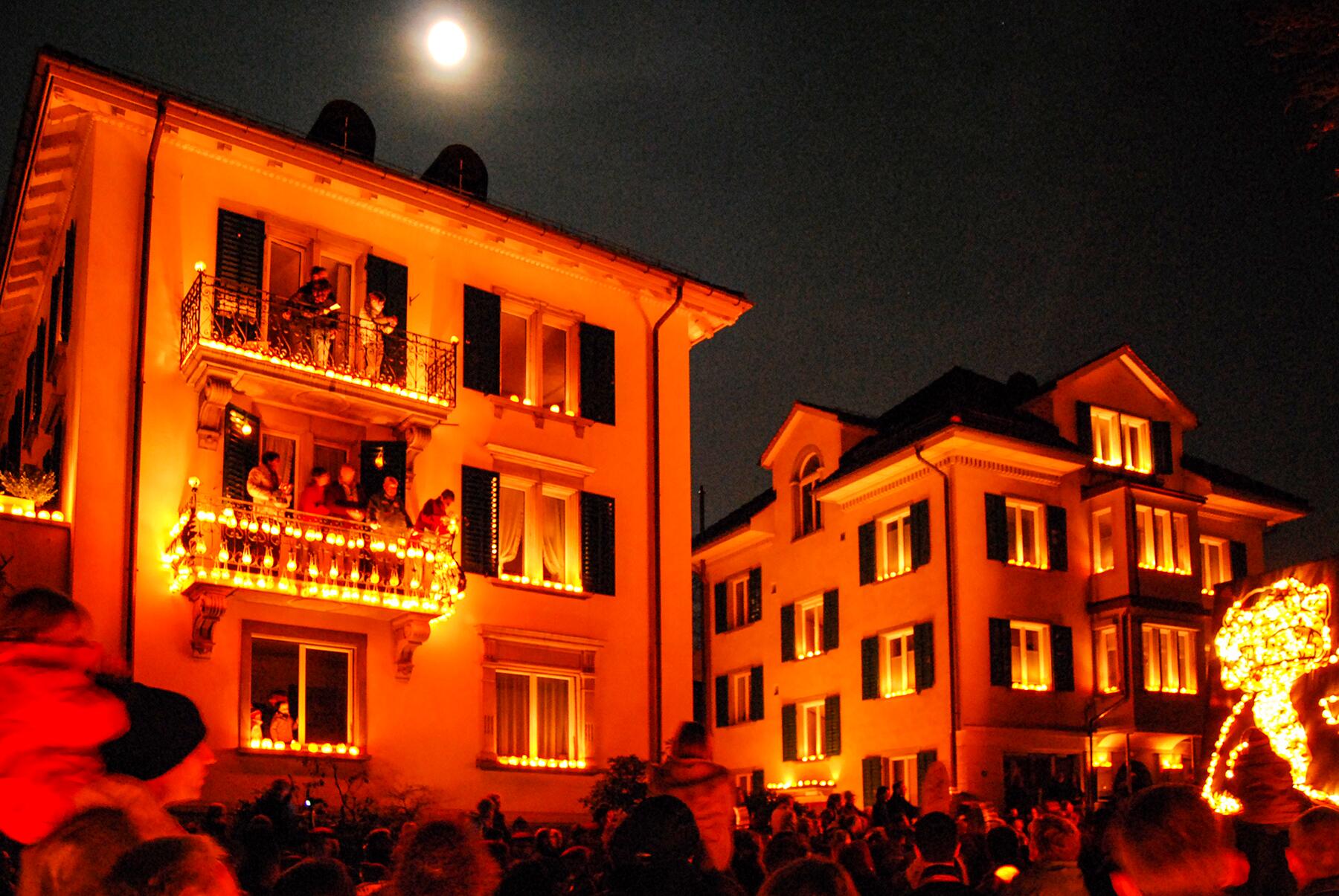 In the lakeside town of Richterswil, autumn is marked by a turnip parade. Schools and groups from the town each construct their own sculptures and images from hundreds of turnips, hollowed out and illuminated with candlelight.

Crowds gather on the streets as the parade marches by, and each household puts on a display in their garden. Visitors can walk the village paths and explore a candlelit wonderland, hopefully stumbling across a food stall or someone selling beer along the way! 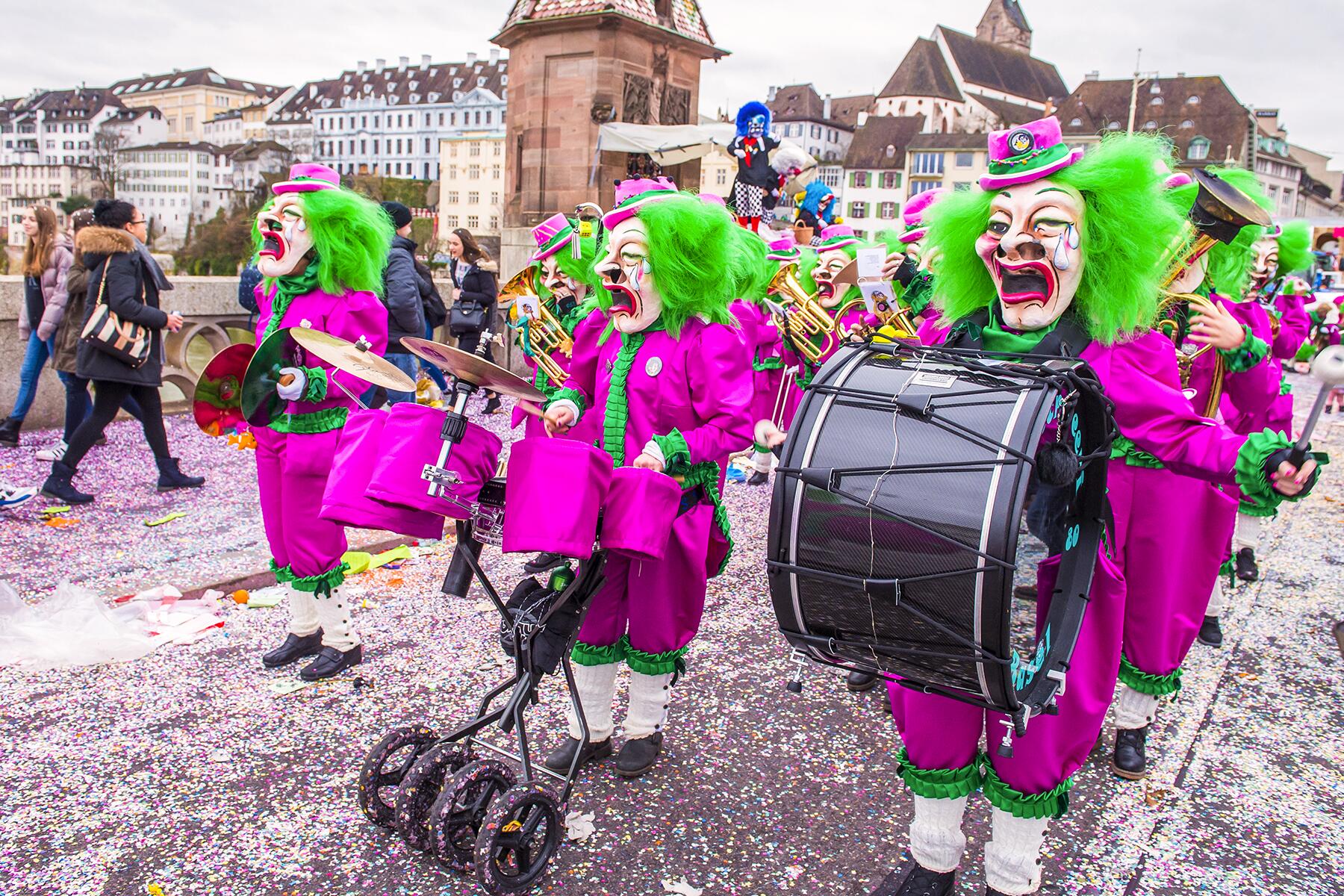 In the city of Basel, the coming of spring kicks off at 4 a.m. on a Monday morning, with Morgenstreich—the official beginning of Fasnacht. As the church bells strike four, the silence is shattered by a huge piccolo and drum-playing procession. A sea of lanterns is illuminated, and the festival has begun.

Over three days countless local groups dress up and parade through the city playing traditional “Guggenmusik.” Costumes in the parade range from the comical and topical to the terrifying and ancient. It’s a riot of color, noise, and confetti. Up to 11,000 people participate.

Basel’s carnival is the most famous and spectacular in Switzerland. It’s so revered that it even has UNESCO protection. 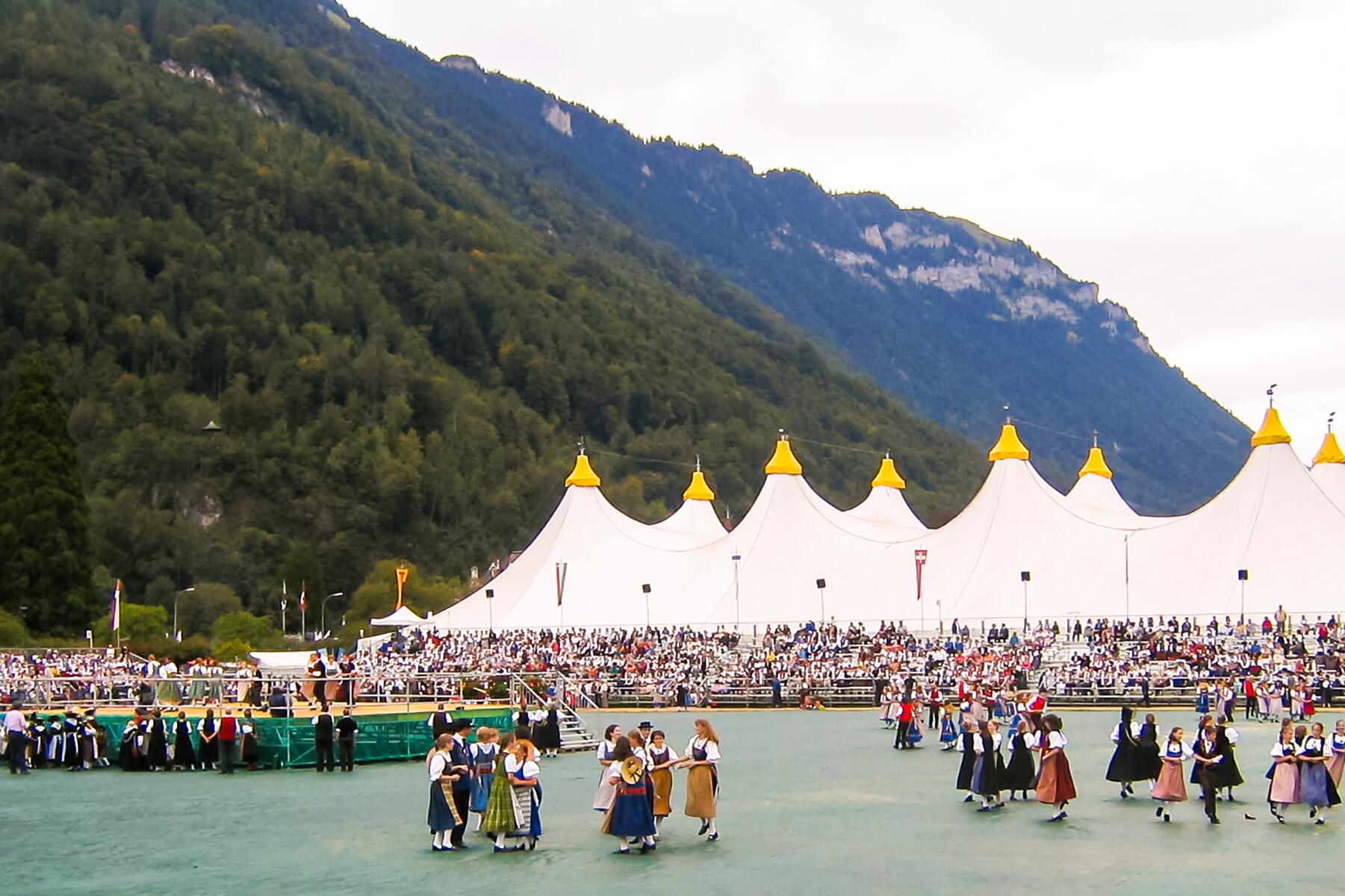 This traditional folk festival takes place in the central Swiss town of Interlaken, in the shadow of the famous Jungfrau. During the festival, visitors are able to see Schwingen, Yodelling, Alphorn blowing, stone-throwing (Steinhausen), as well as traditional dress and dances. Central to the event is a huge stone, which is tossed by competitors. The stone is controversial though and has been stolen twice by regional separatists during recent events. On the Sunday of the festival, a parade takes place—this is the best chance to see all of the regional costumes on display. 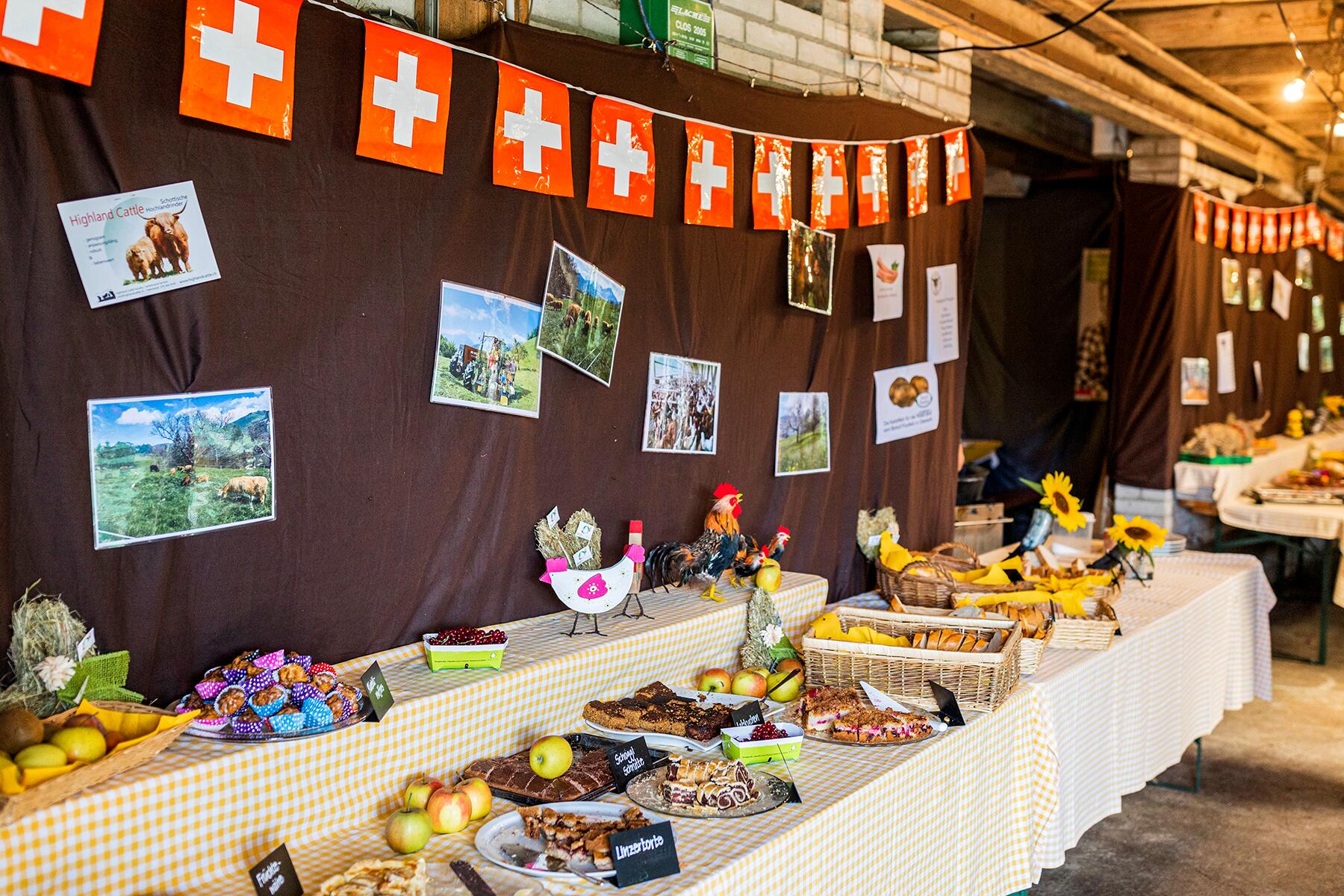 This national holiday takes place on August 1 and celebrates the founding of the country of the Swiss Confederacy. Many celebrations take place across the country, such as fireworks, street festivals, and bonfires. But it’s the more recent tradition of farm brunches that has captured the local’s imagination.

Organized independently by farms across the country, the farm brunch is an opportunity to fill yourself up with local produce, in spectacular rural surroundings. Expect fried potato rösti, eggs, and bacon, as well as a generous cheese platter, cold meats, jams, breads, and cakes.

Guests are seated at long communal tables in barns usually used for livestock or equipment. Visitors are advised to get there early to make the most of the hospitality.