If Portugal’s beaches and coastal towns are calling your name and you’re planning on renting a car, follow this handy guide to the country’s best spots. Get ready for romantic, surf-washed chapels, the scent of freshly caught fish drifting through the air of traditional fishing villages, and Instagram-worthy photos that will make your friends jealous. After all, a road trip is an excellent way to see more of Portuguese culture in a compact amount of time.

Work your way along the Portuguese coast by beginning at the top and heading south. Portugal’s second-largest city is an excellent starting point; the picturesque Ribeira district offers a crash-course on some of the country’s cultural heritage, and the winding network of cobbled roads weave past both modern and ancient buildings. Stop at the Livraria Lello & Irmão bookstore, even if just to snap photos of the lovely Neo-Manueline façade representing symbols of art and science. History buffs should consider visiting the historic, 14th-century house of Henry the Navigator. Porto is also a foodie heaven and the local dishes will leave visitors happily satisfied (have you heard of a francesinha?). Don’t forget to visit the Foz do Douro, Porto’s stunning seafront, rimmed with seafood-focused restaurants and romantic walkways. 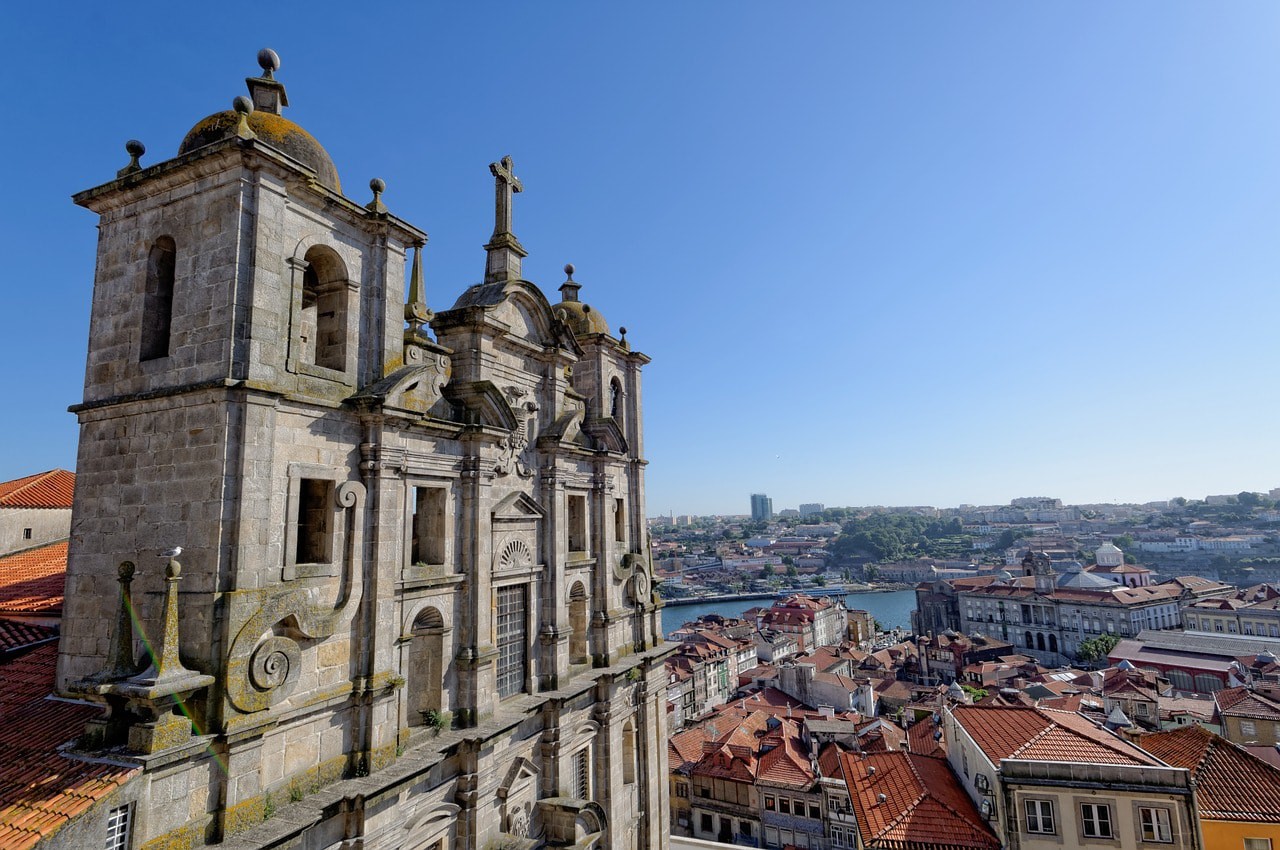 Head to the Praia da Miramar

Once you’re ready to kick your trip into gear, you’ll only have 13 kilometers (eight miles) to go before reaching the first must-see landmark. Get your camera ready, because the Chapel of Senhor da Pedra, sitting alone on a rocky bed at Miramar Beach, calls for photos (especially at sunset). Solitary and washed by waves, it is a mysterious building as it is, but made even more so by its pagan stories and connection. 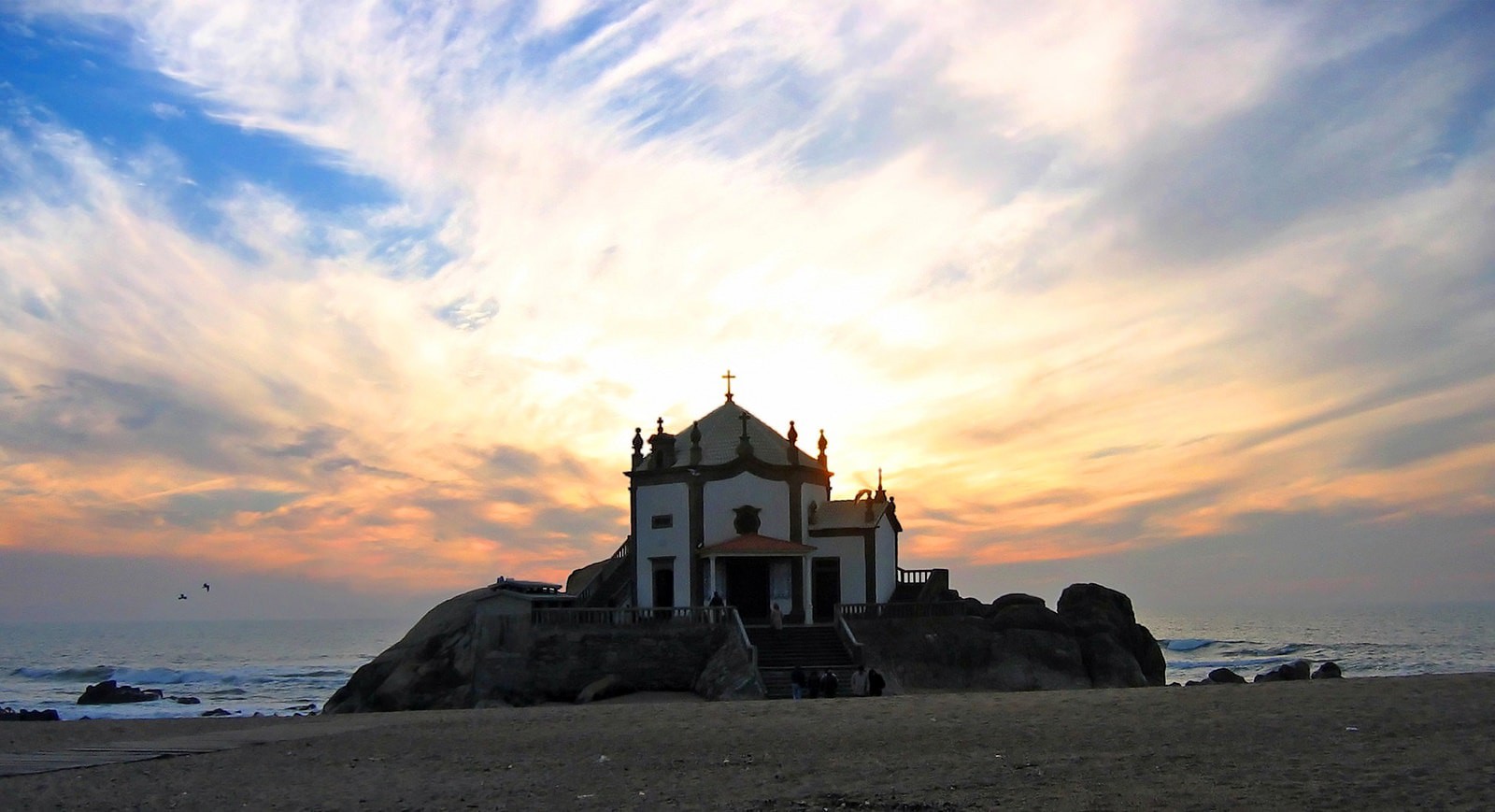 Just before hitting the one-hour driving mark, you’ll see dreamy Art Nouveau buildings line the colorful, boat-filled canals. Aveiro is known as the “Venice of Portugal” for good reason; the gondola-like boats (called moliceiros) float lazily through the canals, carrying groups of tourists for a unique view of the decorative architecture, also characteristic of the town. Visit the 15th-century convent that is now the Aveiro Museum and then cross the street to snap more photos of the 15th-century cathedral. One of the town’s best highlights, though, is the row of rainbow-hued coastal cottages in Costa Nova. Before you leave to continue on your trip, buy a box of sweet ovos moles, a locally made confection of sugar and eggs, to enjoy on the road. 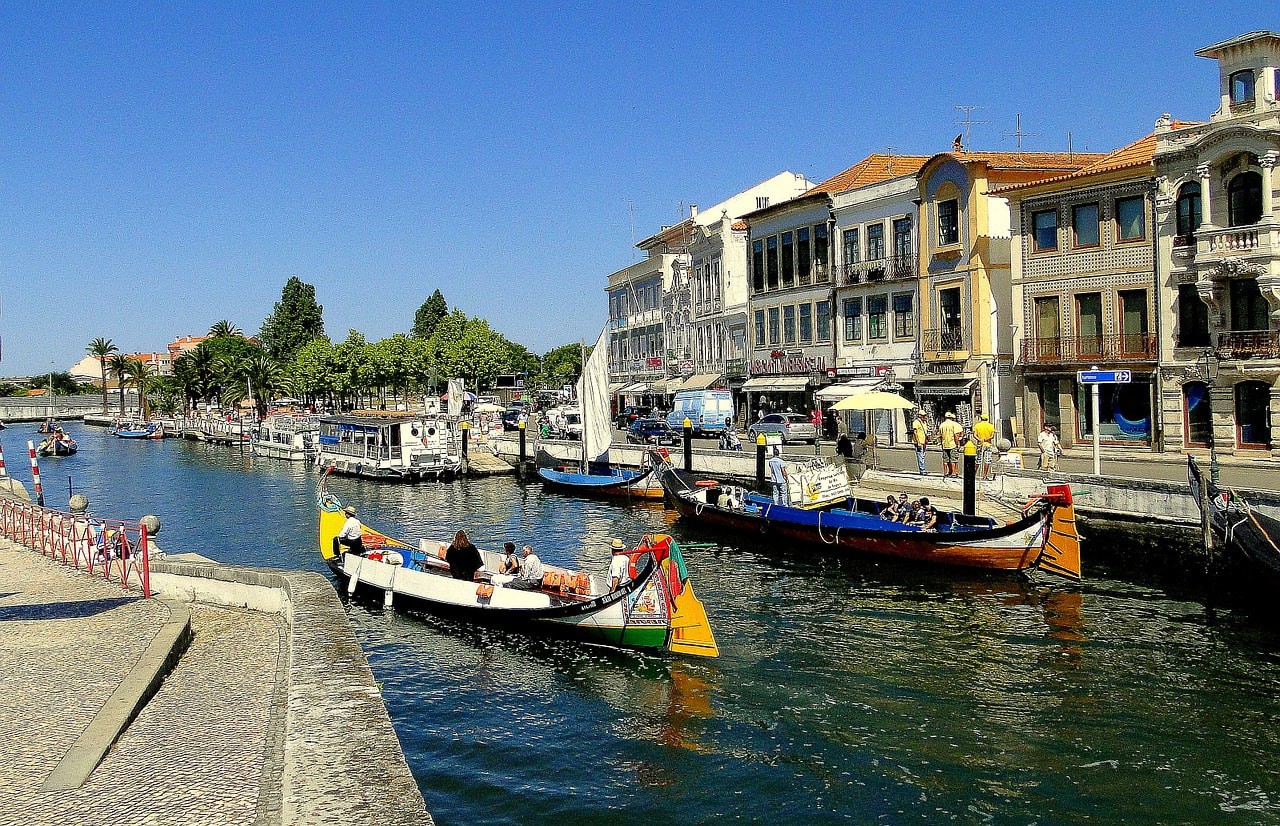 Watch the pros surf in Nazaré

You may want to think twice before jumping on a surfboard in Nazaré, as the massive waves are more than a bit intimidating. That shouldn’t stop you from finding a cozy place to sit and watch the pros, however. After all, this beautiful fishing town holds the world record for largest wave surfed, but it is so much more than a global surf spot. Nazaré’s connection to the sea is apparent and the local culture can be seen in every direction—from the charming, painted boats along the beach’s sandy edge to the women in traditional dresses and multi-layered outfits complete with headscarves.

Visit the forts in Peniche

Stone fortifications played a key role in protecting Portugal from sea attacks, and they can be found all along the coast, but Peniche’s two forts are extra special. The main fortress of Peniche, built in the 16th century, was converted into a military prison during the 20th-century dictatorship and is now a museum (showcasing both roles as a prison and coastal defense). The second fort, the 17th-century Fort of São João Baptista, is approximately 10 kilometers (6.2 miles) off the coast in the Berlengas Islands. The latter is now a bed and breakfast, inviting guests to the islands for sunbathing and snorkeling. Peniche, like Nazaré, is also characterized by massive waves and a strong maritime history. Fresh, locally caught seafood is sold at the restaurants lining the main street by the sea. 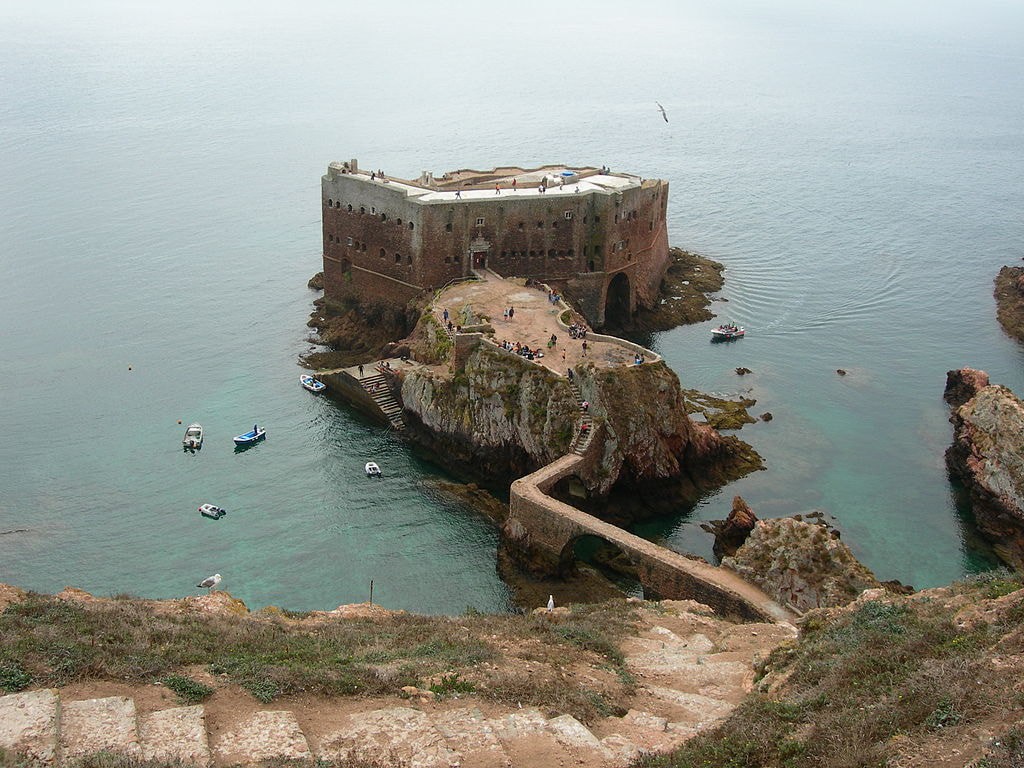 Window shop in Cascais and see landmarks in Lisbon

From Peniche, make your way to Lisbon (you can’t miss the capital, after all) and visit Cascais. There is a wealth of historic and cultural treasures to explore in Lisbon, but the main sights include the bright Praça do Comércio (try to sync your trip with the square’s flea market), the sparkling Tagus River—where locals and tourists sit on lounge chairs gazing at the water and Portugal’s version of the Golden Gate Bridge—and the energetic, cobbled streets, filled with tasca restaurants, small markets, aged homes, and creative bars. In luxurious Cascais, take some time to go window shopping by the trendy shops and traditional maritime souvenirs stores, before making your way to Boca do Inferno, a coastal cliff formation where the powerful waves have led to the area’s dramatic name: Mouth of Hell.

It would take forever to list each of Portugal’s beautiful beaches, but the white-sand coast, the dolphin-watching opportunities, and the feeling of seclusion hike the Tróia Peninsula to the top. Between the Atlantic Ocean and the Sado Estuary, the peninsula stretches nearly 13 kilometers (eight miles). Mostly frequented by Portuguese residents, it gets quieter the further along the peninsula you go.

By the time you reach this stretch of natural park, there’s a good chance you’ll need some rest and relaxation. Pick one or two of the small villages along the 150 kilometers (93 miles) of natural protected parkland, from Sines to Sagres, and get ready for a peaceful refuge from everyday life. Swimming, sunbathing, surfing, and standup paddleboarding are just some of the activities to look forward to, and this is where the steep coastal cliffs looking over the Atlantic begin making their way towards the southernmost part of the country. 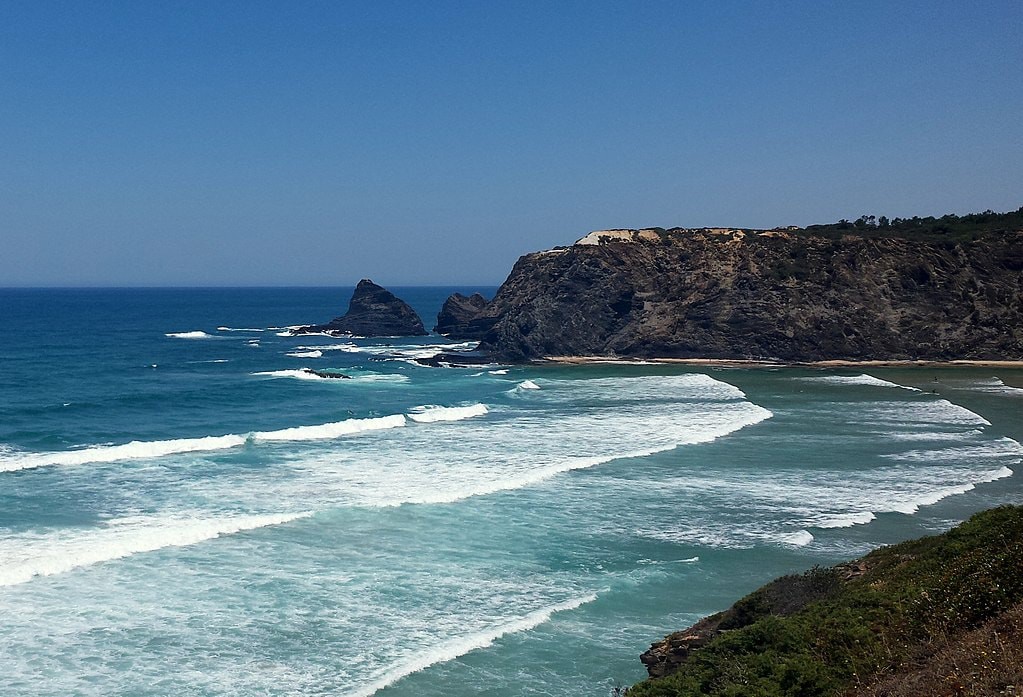 Wrap up in the Algarve

Once you get to the center of the Algarve region, the sun’s warmth and the vibrant town will remind you that you’re in the country’s resort-filled south. Driving away from Sagres and to Lagos, the vegetation of the natural park thins out and the infrastructure starts to pop up. Before your wonderful trip is over, sip on cocktails from the trendy local bars and seaside cafés, take a boat trip through the seaside caves and rock formations, and eat one more delicious seafood dish—a cataplana of steamed shellfish should do the trick.

Dance With the Masked Men of Portugal’s Caretos de Podence