Few neighbourhoods in Lisbon change as much as Bairro Alto. The streets here lead a double life, nearly deserted by day and teeming with a thirsty crowd in the evenings. Although the area is known locally as Lisbon’s party district, before sunset, there’s plenty of art and history to explore and food to sample.

With streets packed with bars, Bairro Alto is often the starting point of a night out in Lisbon. Finding your way through this maze can be a struggle sometimes, even for long-time residents. For newcomers, it’s hard to imagine that this neighbourhood can go from quiet to heaving within the hour. Most people head here for the nightlife. However, during the day, you’ll discover another side of Bairro Alto, one with emerging street art, historical sights and culinary treats from around the world. This guide to the area covers it all, and don’t worry, there’s time for bar-hopping, too. 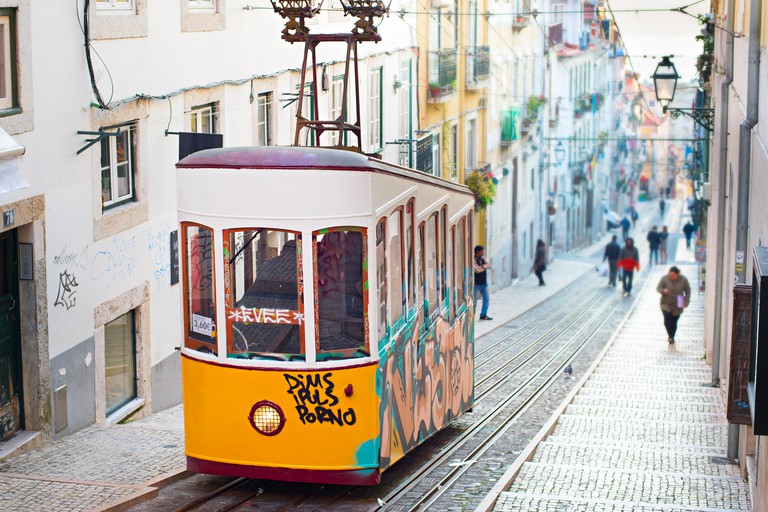 There are many ways to reach Bairro Alto, but usually, it involves going up a hill, as most Lisbon walks do. Back in the 19th century, engineer Raoul Ponsard designed a series of funiculars in the city to help avoid those strenuous climbs. Most of them are still up and running, including the Ascensor da Bica and Ascensor da Glória, two funiculars connected to Bairro Alto. Even if you don’t ride them, you can’t help but admire the picturesque yellow cars as they move up and down the hills. If you do decide to hop on, make sure to get a Zapping ticket in advance for discounts on your ride.

More than just a wool shop, Retrosaria Rosa Pomar is a cosy place to learn about and try traditional crafts in Lisbon. Starting out as an online shop, in 2009 the store found its new home in Bairro Alto at Rua do Loreto. Embroidery, weaving and knitting are a few workshops held here every month. The course teachers usually speak Portuguese and English, so even visitors on a short city-break can join for a session. If you’re comfortable with speaking Portuguese, check out the nearby Mercado de Ofícios, an old food market that has been converted into a training space for arts and crafts.

Take a culinary tour of the neighbourhood 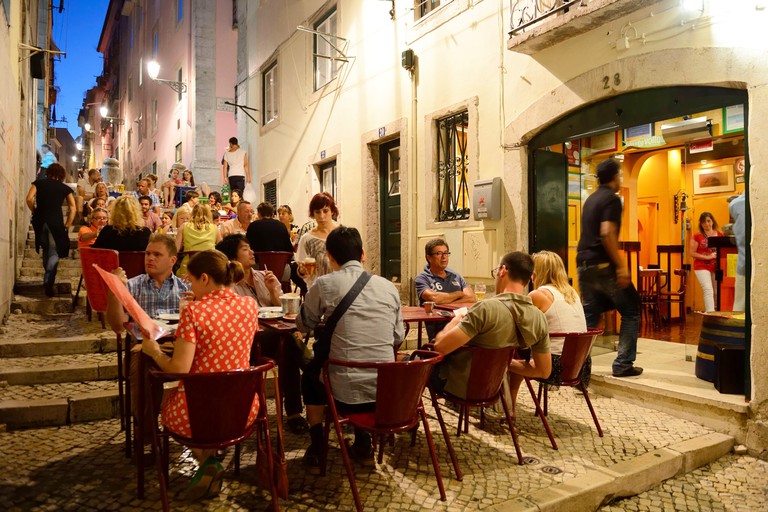 Bairro Alto is slowly becoming a culinary hotspot. You’ll find several Portuguese tascas offering traditional dishes like petiscos and codfish, but this neighbourhood also has its share of international restaurants. Middle Eastern restaurant Tantura serves delicious falafel and hummus, Grill de Korea offers Korean-style barbecue, and Valdo Gatti bakes Neapolitan pizzas made with organic ingredients. Portugal’s younger residents are also finding room for their new businesses here, with places like Miolo serving sandwiches, tempting cakes and sweet treats. Be sure to check the opening times before you go, as most restaurants in Lisbon close on Mondays. 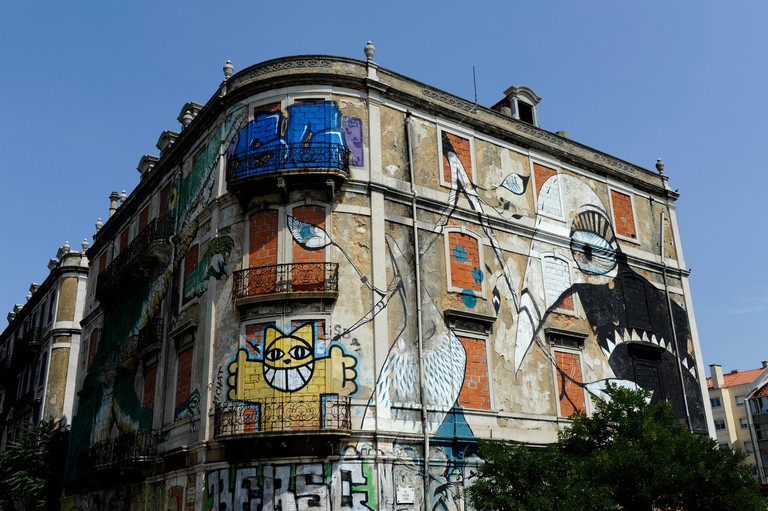 Street art is everywhere in Lisbon, and Bairro Alto is no exception. Walk around the neighbourhood to discover colourful pieces by Portuguese and international artists. Some are tiny black stencils, others occupy whole walls, like the mural at Travessa dos Fiéis de Deus. RIGO and António Alves are the two artists behind this piece, which was inspired by 1970s leftist propaganda. Other areas worth checking out for street art include Rua da Vinha, Rua de São Boaventura and Calçada da Glória. To learn more about the history of each piece, you can join a guided walking tour with Lisbon Street Art Tours. 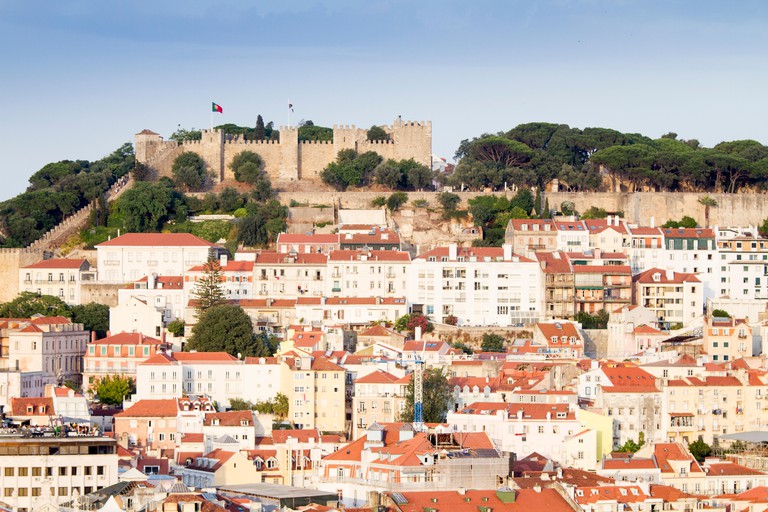 Set on a hill, the Bairro Alto neighbourhood offers a privileged vantage point of Lisbon’s river from nearly every street. However, there’s no better way to get sweeping views of the city than from the city’s most iconic observation points, Miradouro São Pedro de Alcântara. The terraced view point overlooks the river and the São Jorge castle, which rises above the terracotta roofs of Alfama. Once you get to São Pedro de Alcântara, grab a drink at the kiosk or bring a bottle of wine, and start off the night like most of Bairro Alto’s residents. 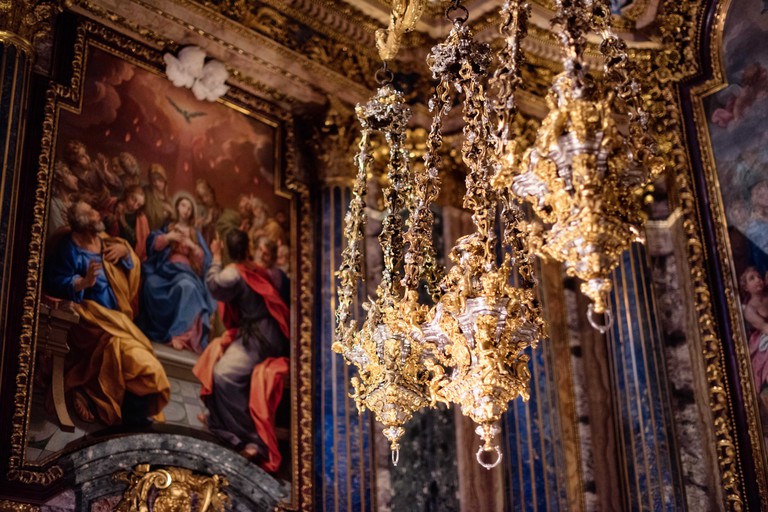 For years, Largo de São Roque was the central meeting point in the neighbourhood. It was a place where workers would come together to start their working day, and the ardinas (paperboys) would distribute newspapers. Right in the centre, you’ll find Igreja de São Roque, a former Jesuit church. The Roman Catholic church is unpretentious on the outside, but is decorated with lavish Baroque detail on the inside. Opulent materials like gold, ivory, agate and lapis lazuli were used to adorn one of its chapels. During the church’s construction in the 18th century, three ships were known to have transported the heavy materials from Rome to Lisbon. Next to the church is a museum that has an extensive collection of historic religious art on display, including sculptures, paintings, jewellery as well as Flemish tapestries. 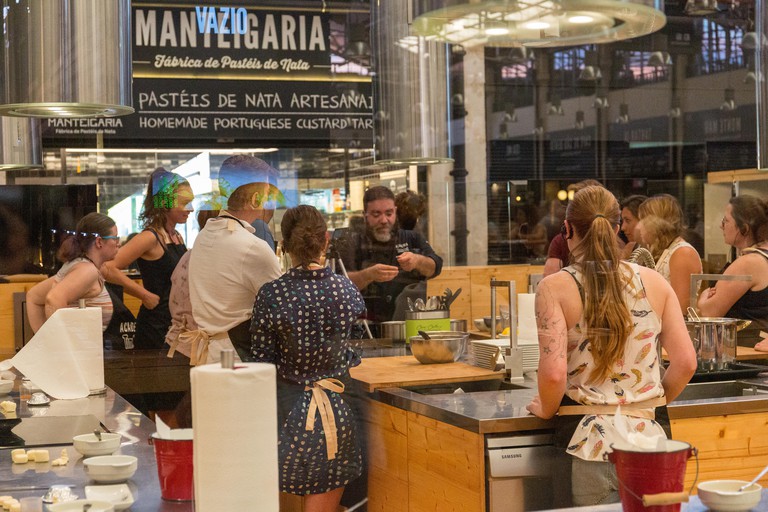 According to Lisbon’s local residents, the Manteigaria bakery serves some of the most delicious pastéis de nata (custard tarts) in Lisbon, drawing large crowds on a daily basis. This Bairro Alto bake shop is an excellent alternative to the city’s world-famous custard tart shop Pastéis de Belém. For an early breakfast or a midnight snack, treat yourself to a sweet pastry at any time of the day, as the bakery is open until midnight. Step inside to order and watch the staff prepare the next batch of pastéis through the glass, while you wait. Note that there’s not much room to eat here, so grab a box and enjoy pastries or tarts on-the-go.

Listen to a fado performance at Tasca do Chico 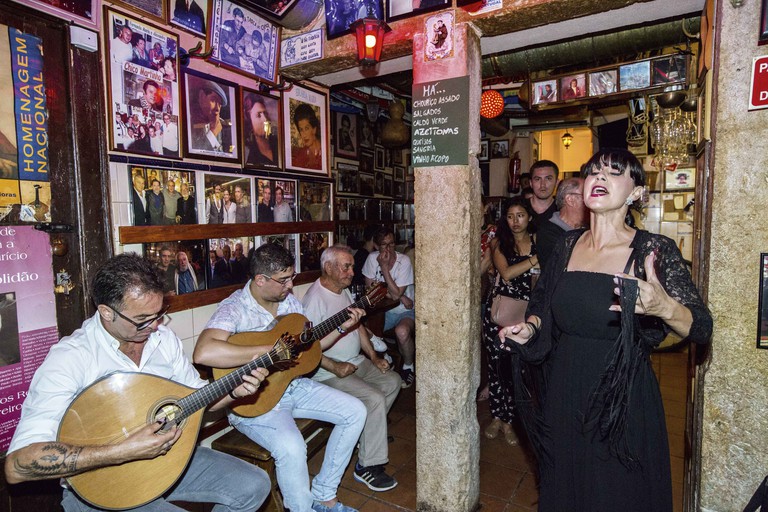 Football scarves hang from the ceiling, and colourful picture frames clutter the walls at Tasca do Chico. Every night at around 8pm, this traditional bar hosts a number of fado performances – a melancholic music genre that is unique to Portugal. The show is free, but whilst you’re waiting, order yourself a glass of wine and accompany it with snacks, like the chouriço assado (flame-grilled chouriço). Make sure to come early to guarantee a seat, or book a table in advance. Note that cards aren’t accepted here, so be sure to bring cash.

Set up in the 1990s by a group of local artists, Zé dos Bois (ZDB) is a non-profit organisation that champions Portugal’s booming art and music scene. Settling in an 18th-century palace in Rua da Barroca, the artists transformed the space into one of Lisbon’s liveliest venues. Today, ZDB doubles as a bar, cultural centre and art gallery, promoting local artists and also those from across the globe. It plays host to hundreds of cultural events a year, including concerts, exhibitions and dance performances. In the summer, the rooftop becomes the club’s meeting point with alternative open-air cinema viewing scheduled during the warmer months. 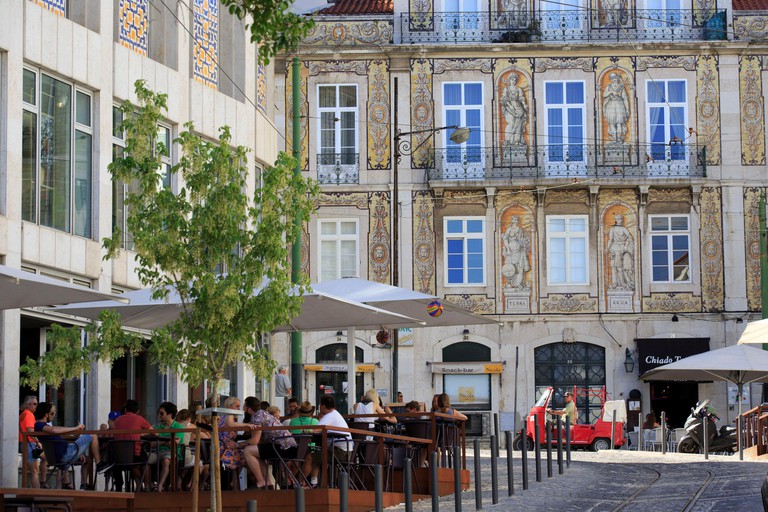 Bairro Alto is known as Lisbon’s party district, so as the weekend approaches, bustling crowds take over the neighbourhood. Most bars are tiny, so people tend to spill out into the streets, hopping from bar to bar with a glass in hand. By midnight, you have to jostle your way through flocks of people in search of an empty drinking spot. Still, there’s no shortage of options here. Head to Loucos e Sonhadores for a low-key drink or enjoy the jazz nights at Páginas Tantas. For a stylish option, head to Pavilhão Chinês, which was once a grocery store and is now decorated with trinkets and curiosities that make the space feel more like an antique shop or museum. During the hotter months, head to Bairo Alto’s best rooftop bars like Park and Insólito, where you can enjoy a cocktail with panoramic views of the city.

A Guide To Aveiro, Portugal: Things To Do In The City Of Canals