Germany, like a soccer team, has always been there or thereabouts in terms of world rankings. With strong world cup and European championship finishes in recent years, they have produced some of the most talented footballers the world has ever seen.

However, since the catastrophe that was the 2018 world cup for Germany, they’ve gone through a major rebuild of the national side. Now we are seeing a new young, fresh crop of players coming through that are looking very strong going into next summer’s European Championships.

Below is a list of the top 10 German players to grace the soccer field at this moment in time.

So, without further ado: 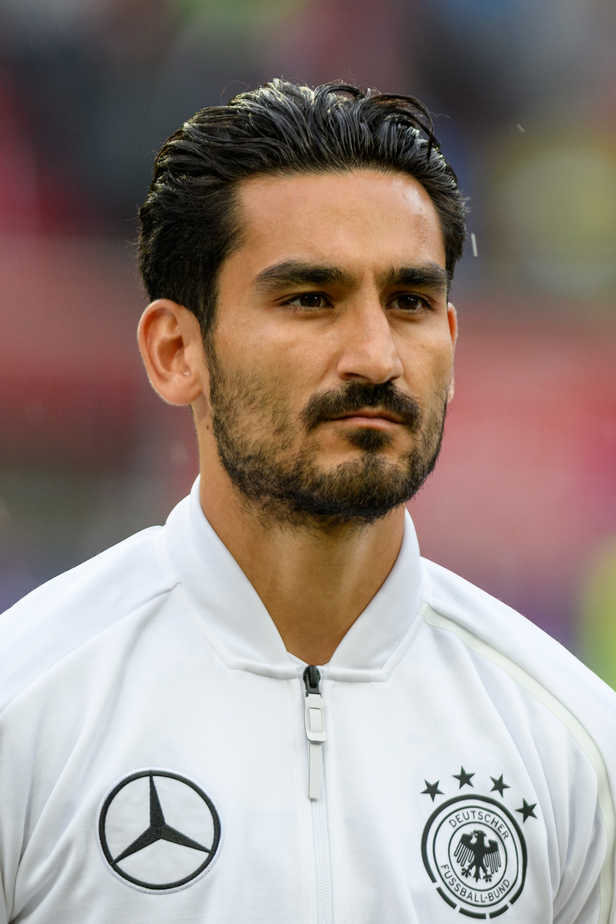 It’s been a rather strange career for Gündoğan so far. After having shone under Klopp in his Borussia Dortmund team and after having got that big-money move to Manchester City in 2016, he has never really cemented himself into the first team at City, but that’s changed this season.

He’s been playing an awful lot under Pep at the Etihad Stadium so far this campaign. You could possibly pin that on the injuries Pep has had to deal with in defense and midfield, but with that, Gündoğan has really taken his chance, and now, when all are fit at City, Pep will really have a hard decision to make on who he chooses to start in that central midfield role.

Even on the international stage, Gundogen is taking his chances, by scoring twice against the Republic of Ireland in the latest round of European Qualifiers, which would have done him no harm in making the squad for the Championships next summer.

This guy can play anywhere. Possibly the world’s best utility player, and I do not mean that to be a knock against this guy at all. One of Europes best right back’s when he plays there, and one of Europes best defensively minded central midfielders when he plays there as well.
Another Bayern Munich product, Joshua Kimmich will be a mainstay in that Munich side and the international team for years to come.

For every generation, there seems to be a German player who stays in both the Munich first team and the German first team for what seems like an eternity.
Klose, Schweinsteiger, Müller and now, with the amount of experience he has at this stage in his career already, I would put money down on it being Kimmich this time around. 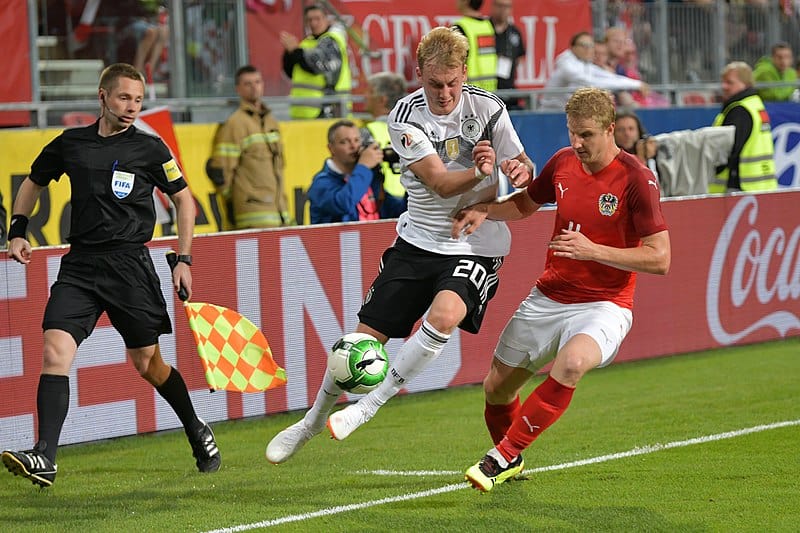 Julian Brandt playing in a friendly match for Germany against Austria.

After signing for Borussia Dortmund this summer, the hype around this 23-year-old midfielder was high.
However, Brandt has been in and out of the starting 11 so far this season, but when he plays, it does appear this creative midfielder has the natural ability to become a staple in the Dortmund side for years to come.

After really impressing at Bayern Leverkusen, Dortmund appeared to be the perfect move for him, and seeing what he is capable of producing on a football field, he will most likely prove to be one of Bundesliga’s’s top midfield players.

Another young midfielder to make this list. Kai Havertz is a very two-footed, surprisingly imposing footballer, whose playing style has been compared to the likes of Michael Ballack, Toni Kroos and Mesut Özil.

After signing for Bayern Leverkusen at the age of 11 and working his way up through their youth academy, Havertz has impressed year after year, earning international call-ups throughout thanks to his technical ability, goal threat and his talent on the ball with both his right and left foot.

Already an experienced player in the Bundesliga at his age. He was the youngest player in the league’s history to reach 50 appearances. I think it’s safe to say, Havertz is already proving to be a key component of the Leverkusen side.

Impressive performances season after season has meant that Havertz is now being heavily linked with a big-money move to England, Spain and the top German sides; and with Leverkusen under-performing so far this season, both domestically and in Europe, it isn’t too farfetched to assume that his big move may come sooner rather than later. 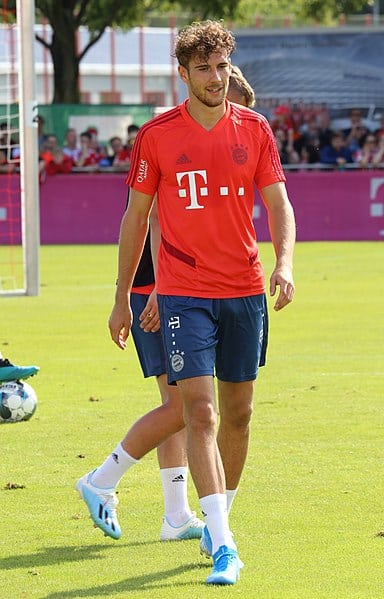 Yes. Another young, German, Bayern Munich player to make this list, but can you blame me? Goretzka is another in the long line of talented players Bayern Munich have on their books.

Injury has also hampered this German since his move to Bayern a couple of years ago, but the Bayern boss Niko Kovac is a fan and does believe that Goretzka has everything in his locker to become a world-class midfield player.

Being hailed at such a young age as the “talent of the century” by Peter Neururer. (Goretzka’s head coach at VfL Bochum) He is now reaching the peak years of his football career at 24 years of age.
Goretzka is another powerful and silky midfield player who, once he stays fit, will undoubtedly reach the heights that so many people expect him to hit.

A controversial pick I admit. Sané is currently sidelined with a serious injury that’s set to rule him out for the majority of this season. However, still only 23-years-old, Sané still has the ability to become a truly world-class player.

Last season should provide enough evidence to suggest that that is a real possibility.

Sané not being picked for the world cup squad in 2018 was, in my opinion, a shocking decision by the manager. When he gets back to full fitness for Manchester City and Germany, he will be a force to be reckoned with going forward.

Winning the young player of the year award in the Premier League for his stunning performances throughout the 2017/18 season, it’s obvious Sané has the ability to push his career further.
But I feel his biggest test will come when he makes that return because those incredibly hight expectations of him will still be there, given those performances he was putting in for City before the injury.

A veteran at this point with all of his experience and he’s still performing at the very top level. Yes, he’s had a couple of pretty big injury setbacks, but he’s come back this season looking as good as ever.

At 33 years of age, Neuer still has several years at the top level left in him and he’s already won every piece of silverware available to him. With the years he has left, I imagine he will want to really cement his place as one of the best goalkeepers to ever play the game, and if he stays fit, I can’t see why that would not be the case.

I don’t think I’ll be alone here when I say that Barcelona haven’t really been the same dominant force they were a decade or so ago. They seem to appear to be more of a one-man team when Messi is in the starting 11. But this season, ter Stegen has stepped up and got Barcelona out of jail on more than one occasion so far this campaign, most notably in the Champions League match away at Dortmund.

That form has been a key part of Barcelona’s season so far with the Catalan club’s defense being rather susceptible again in the 2019/20 campaign.

It’s an incredible headache for Joachim Löw to have just before a European Championship, ter Stegen or Neuer? No matter who he chooses, there will be a great goalie between the sticks for Germany next summer.

Like many Bayern Munich players this season, Süle really came to my attention in that 2-7 demolition of Spurs in London earlier this season. It’s not as if I hadn’t heard of him before, but this was evidence that he can really mix it up on the big stage, and keep one of the Premier League’s most prolific goalscorers (Harry Kane) rather quiet for 90 minutes.

It seems every top-class center-back nowadays costs an absolute fortune, so Munich find themselves in a very strong position when it comes to Süle. I’m sure it’ll take a monstrous fee for Bayern to let him go but if they keep him, they have a no-nonsense, bullish, and dominating defender for years to come. 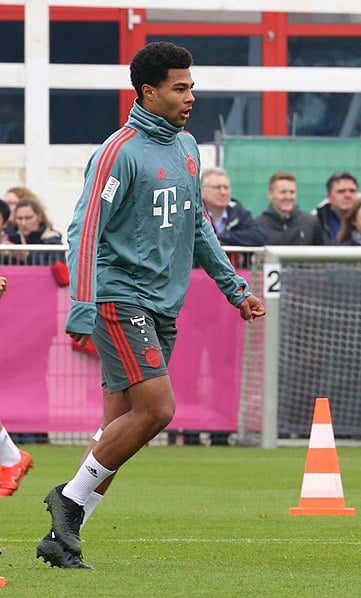 Serge Gnabry. What more could be said about this kid? He is absolutely tearing it up so far this season, both on the international stage and at club level for Bayern Munich. 4 goals away at Spurs earlier in the Champions League really woke everyone up, outside of Germany, to this forwards talent.

A lot of people are asking why Arsenal let him go, and I’m asking that as well. He’s certainly proving any doubters wrong and it looks like he’s not going to be letting up anytime soon.

He has a rapid and clinical style of play, he’s strong with both feet and is as fast as anyone around right now. Gnabry causes havoc to defenses whenever he plays anywhere across the front three and with service certainly not being an issue at Bayern Munich, this season expect Gnabry to hit 20+ goals.

There are a whole bunch of talented German players I haven’t included in this list, and I’m sure many of you reading this would have wanted to see one or two other names in there. However, I truly believe the 10 players I have listed above are currently, the top 10 best German footballers in the world right now.

7 Of The Most Beautiful Lakes In Germany