This is the adorable moment a brown bear cub showed off his dancing skills and made moves reminiscent of Baloo in the Jungle Book’s Bare Necessities.

Hilarious pictures snapped by Robert Hawthorne, 21, show the boogieing bear standing upright kicking his legs up and out while swinging his arms by his sides.

Certainly not camera shy, the little cub also appeared to try and impress his mom as she watched the performance in Katmai National Park in Alaska, US, in July.

Despite the youngsters’ best Baloo impression, the large mom bear simply appeared amused at her child dancing in the shallow water on a tidal flat. 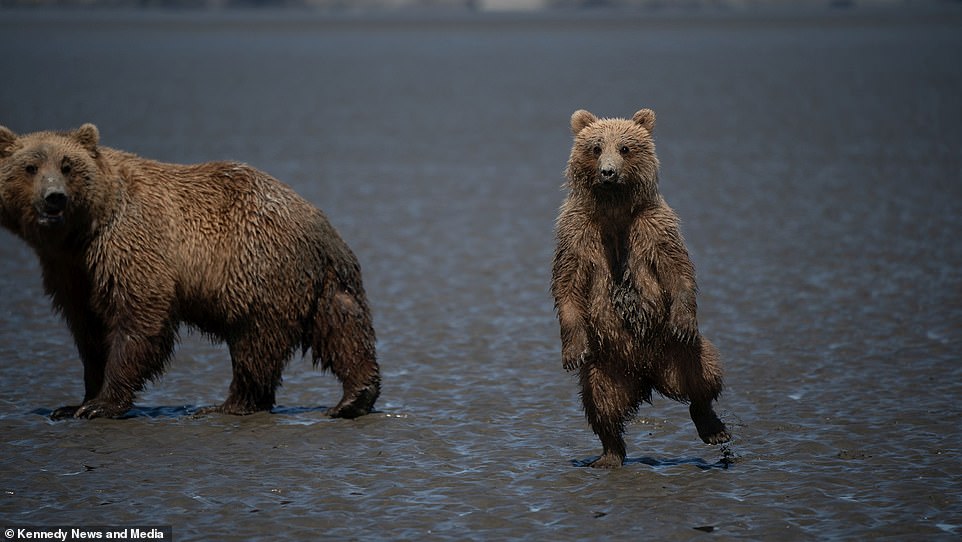 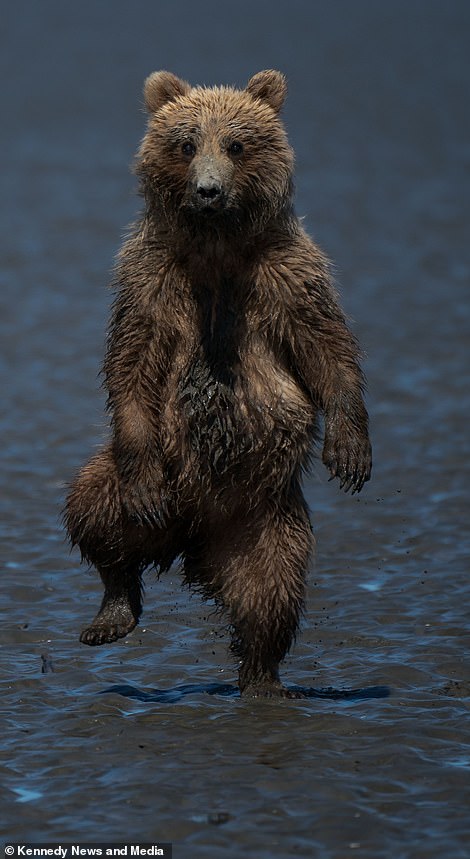 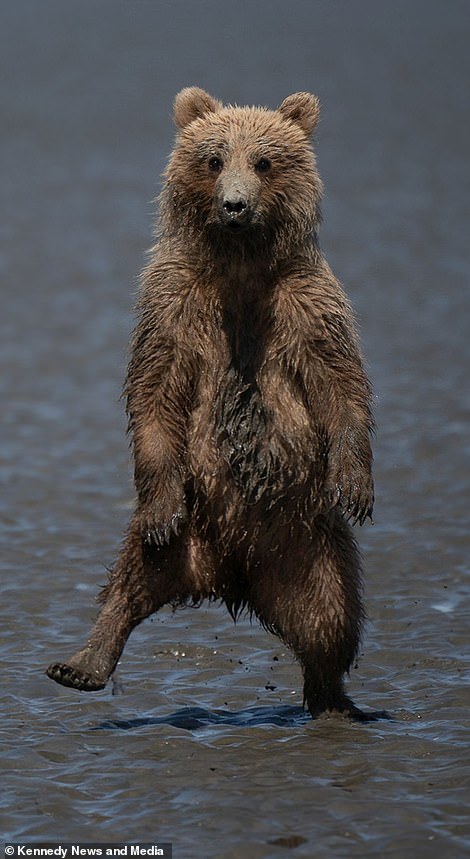 The young brown cub lifted one of his legs and swung his arms, left, before putting a foot back down, right, while making sure to keep looking at the camera

Wildlife photographer Robert was kneeling in the mud watching the pair dig for razor clams when he captured the hilarious pictures.

He said: ‘It is not very often that you can capture a bear in such a unique pose.

‘I have been lucky enough to have the cub [focusing] his attention on me when this took place – I managed to have great catch light in both of his eyes.

‘[The photos] usually get people laughing and many can’t help but mimic the bear’s posture in the photo. It is often people’s favorite from my trip to Alaska.

‘Because who doesn’t love bear cubs? He is a cute cub with a lot of attitude in his facial expression.’

Robert, who is from Bozeman, Montana, said bears are his favorite to photograph because of their ‘complex personalities and often comical behavior’. 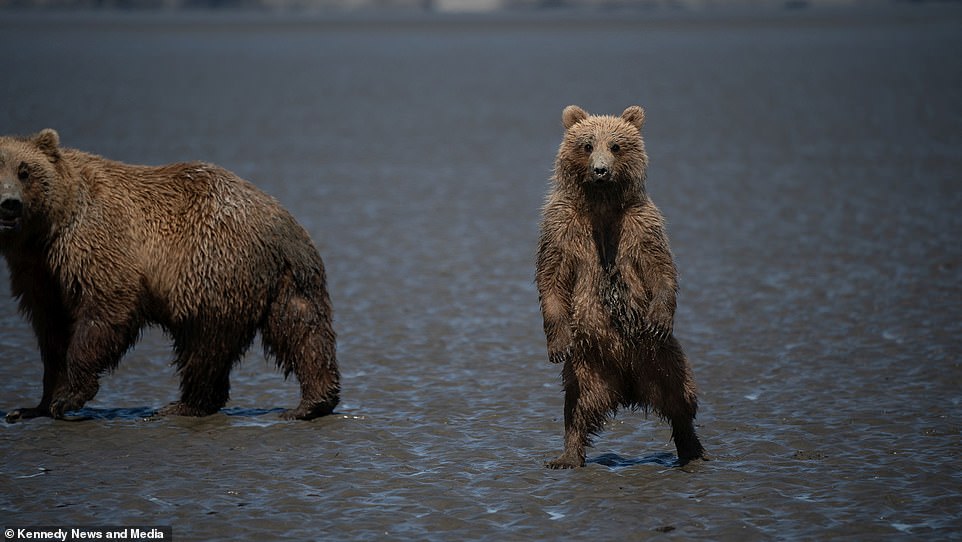 Photographer Robert Hawthorne, 21, snapped the pictures while kneeling in the mud in July and said the baby bear was ‘cute with a lot of attitude in his facial expression’ 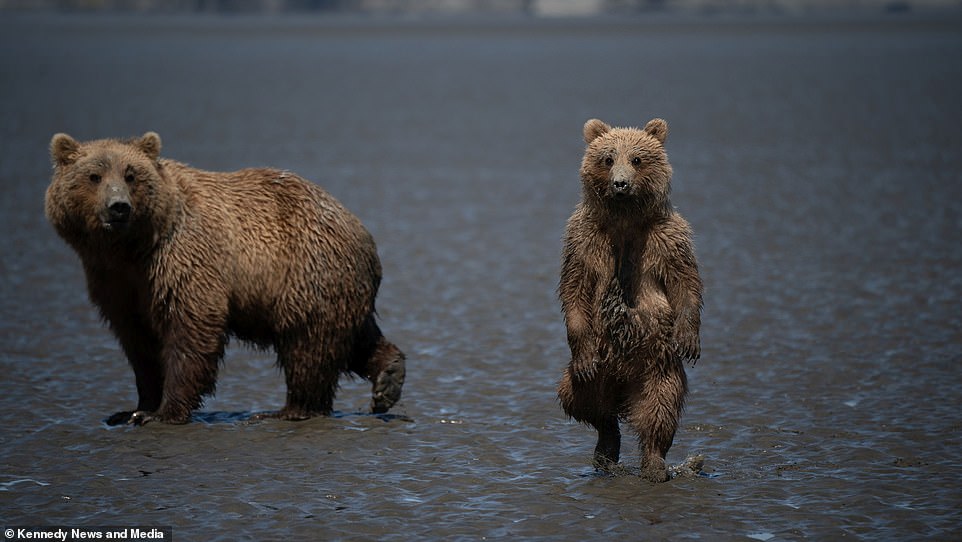 Robert thinks that the cub, pictured moving its arms as the mom bear watches, was trying to attempt a ‘bluff charge’ to scare him off from the tidal flat

He said: ‘They can be among the most cooperative animals for photos as well.

‘Bears will often tolerate people as if they were never even there, creating some of the most unimaginable encounters you will have to see to believe.’

The wildlife photographer, who has been working for four years, also revealed that sometimes cubs will attempt a ‘bluff charge’, like they have seen their mom’s do.

He explained that the baby’s might have seen parents defend them and some are curious to find out if they can also scare off potential danger. 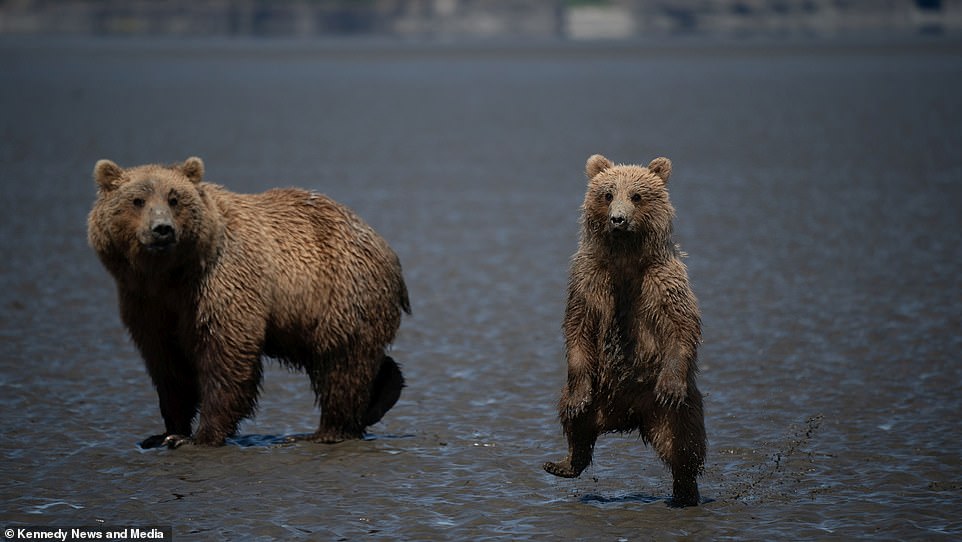 The mom, right, appeared bemused by her cub’s moves and simply watched him as he stood on his rear legs and looked at photographer Robert

He believes this dancing cub was either testing his boundaries or alerting mom to his presence by standing on his hind legs and taking several big steps toward him.

Robert said: ‘In this case, the mom knew of my presence long before the cub did, so this alert was no surprise to her.

‘The mom was almost amused at her cub’s attempt to scare me off. She has most likely seen people several times in her life and knows we do not pose a threat.

‘The cub, however, quite likely had never seen a human before. It only took a few steps in my direction and then quickly fell back in line with mom.’