Lisbon is a football-obsessed city, with supporters of all ages fanatic about their teams. Wander Lisbon’s streets and there’ll invariably be a TV in the corner of a bar showing a match, or locals glued to their phones and radios for the latest updates. Whether it’s Benfica, Sporting or Belenenses, you can find out more than you might think about Lisbon and its people from the team they support.

Founded by wealthy owners in 1906 and hailing from the central suburb of Alvalade, Sporting is the most upmarket of Lisbon’s football clubs. Benfica, meanwhile, are the more working-class team from the eponymous district three kilometres (two miles) to the west.

Founded in 1904 by students as a sports and social club, Benfica’s full name is ‘Sport Lisboa and Benfica’, while Sporting Lisbon is officially ‘Sporting Clube de Portugal’, and was founded in 1906. 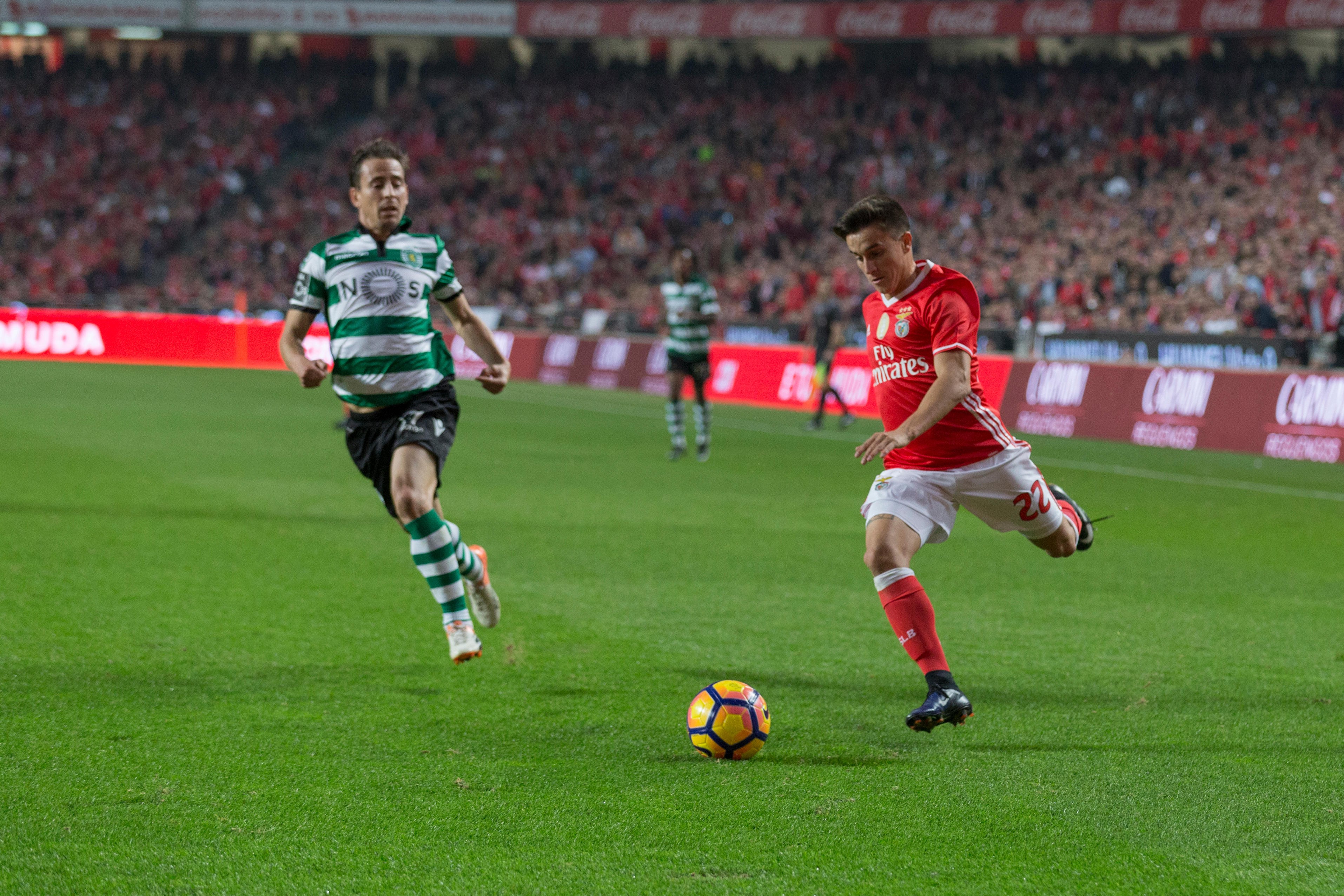 “What makes Sporting special is that it’s more than a football team,” says Ivo Costa from the Núcleo do Sporting Club de Portugal, a supporters’ club in London. “It’s a sports club with over 30 European Cups from football, handball, hockey, judo, athletics and futsal.”

Sporting’s various activities were originally played in the grounds of the wealthy Viscount of Alvalade, who gave his name to the current stadium – the Estádio José Alvalade – in the same area. Fast-forward 113 years and the premise is much the same: a thriving sports club with various other sports teams alongside the famous football side. 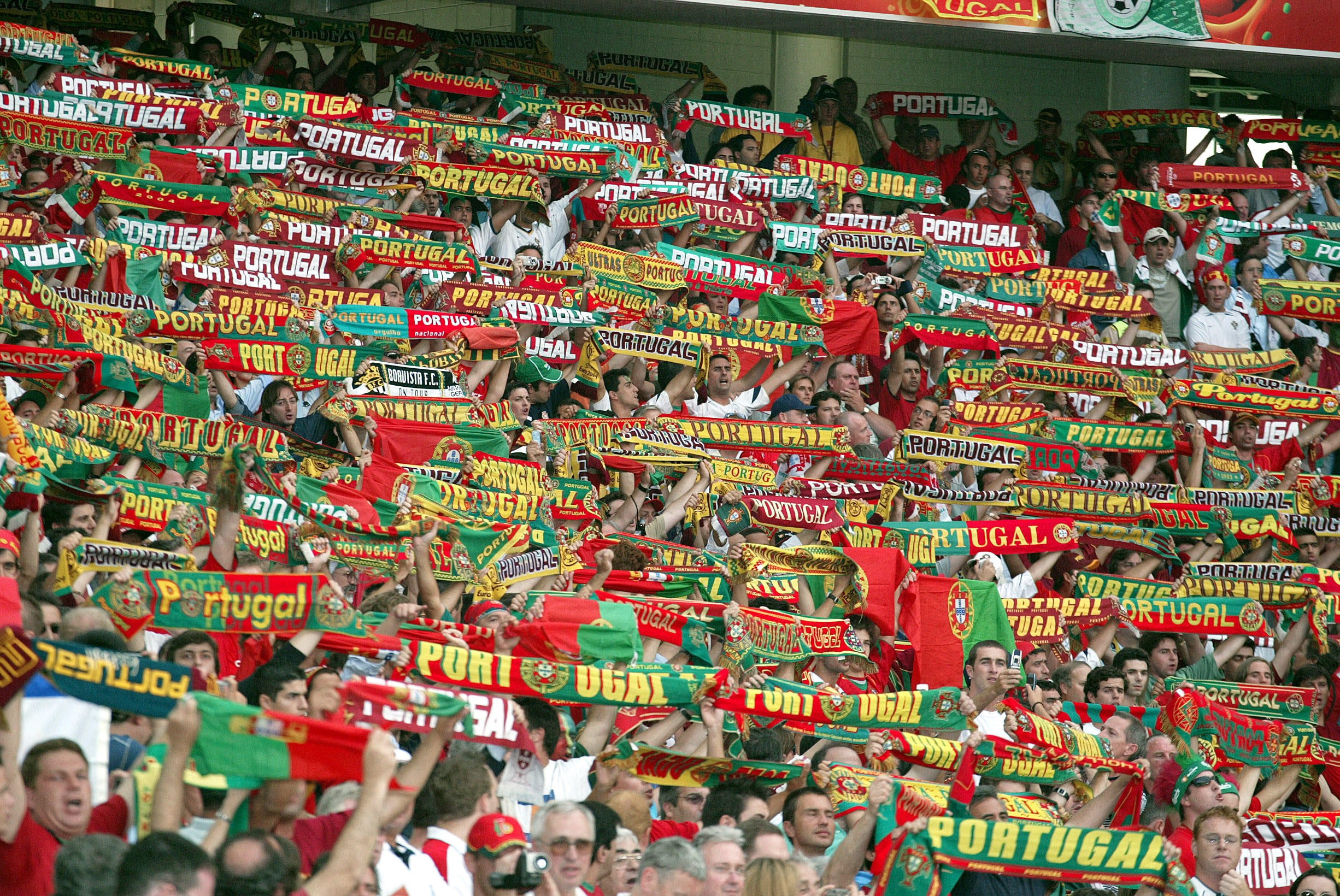 Sporting’s football side have won the Portuguese league 18 times, and boasts a hugely successful academy that has produced stellar talents such as Luís Figo, João Moutinho and, of course, Cristiano Ronaldo.

The club has loyal followers throughout Lisbon and beyond, and passions often run high. Both Sporting and Benfica have their ultras (they’re usually the ones with massive flags behind the goals), and in 2018, when problems on the pitch were followed by rumours that Sporting would cut back some of its non-football sports, the crisis reached a head when some fans attacked their own players after a training session.

But the majority of supporters are representative of the city as a whole: laid-back and good humoured. You’ll find plenty of women supporters, too. “It’s common for women to follow football, even from a young age,” says Costa. “You often see older women on their own at the matches, too.”

The growth of the women’s game is now being actively encouraged in Portugal, with over 20 FIFA academies set up around the country for girls aged 12 to 17. As a result, women’s football has taken giant strides. This season, perhaps envious of the success of Sporting’s women’s team, Benfica formed a women’s team for the first time, recruiting some top international players.

As newcomers, Benfica’s women’s team started from the bottom of the league pyramid. They duly won their first 14 games, scoring 257 goals with none conceded, including a record-breaking 32–0 win.

Silverware seems to come as standard for Benfica teams: the men’s team is historically hugely successful, winning the European Cup twice and being runners-up on five other occasions. They are current Portuguese champions and have won the Portuguese league 37 times. 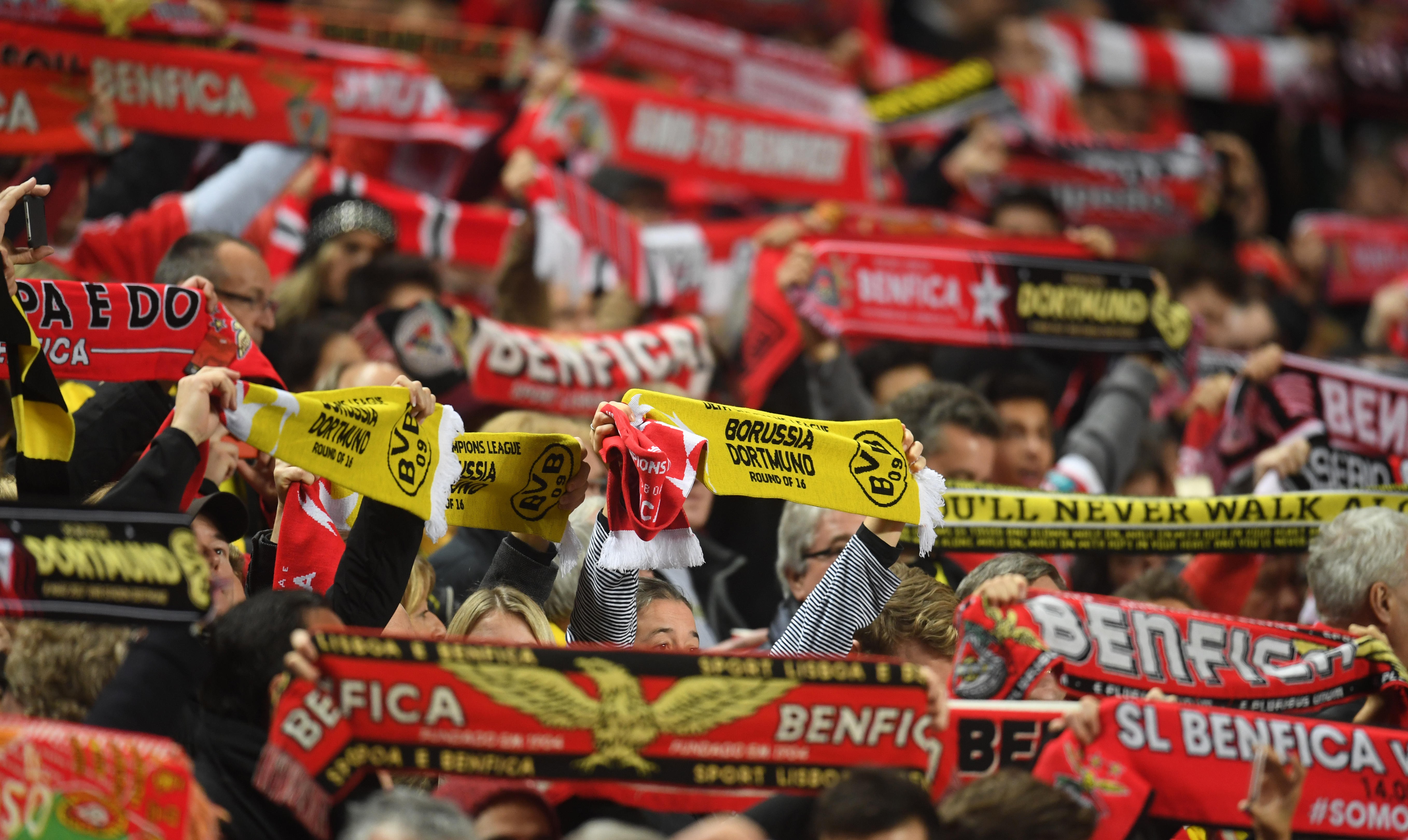 Benfica is one of the best-supported teams in the world, with 160,000 paying members | © dpa picture alliance / Alamy Stock Photo

For a time, Benfica officially had the most paid-up members of any football team in the world, at more than 160,000. When the old Estádio da Luz first opened in 1954, its 120,000 capacity made it the largest stadium in Europe (though its current incarnation is far smaller). “They say Benfica is the biggest club in the world,” says Carlo Maximino, owner of the Mundial Hotel in Lisbon. “In Benfica, everything is lived with the responsibility of being the greatest. The true Benfiquista always ‘has in his soul immense flame’, as in the chorus of our hymn.”

Benfica’s mass appeal is partly historical. Portugal spent much of the 20th century under the dictatorship of António Salazar. He was keen to promote football along with religion and music as a trio of traditions he believed would motivate his hard-pressed working classes. These were billed as the three Fs: fado (the traditional Portuguese music), Fátima (the Catholic pilgrimage site) and futebol. In a country mired by poverty and with few other forms of release, football was a useful propaganda tool for Salazar, who was happy to sing the praises of a successful Benfica team made up solely of Portuguese players. Indeed, the player Eusébio later said, “Benfica must have talked with Salazar, and he called for me and told me I couldn’t leave the country, because I was an asset of the state.”

Salazar’s ruthless policies also meant thousands of people emigrated to find a better life elsewhere, taking their love of football with them. As retired quarry worker Manuel Honardo explains, “People from poor families, supporters of Benfica, set out to other richer countries in Europe, Canada and Venezuela. It was only natural to set up ‘Casas de Benfica’ – supporters clubs based on the local passion – for us to have a beer and meet fellow Portuguese people.” There are now Casas de Benfica and Núcleos do Sporting Club all around the world.

Portugal’s leading novelist, António Lobo Antunes, served in Angola during the colonial wars in the 1960s and explained in an interview with a Portuguese newspaper that, when Benfica were playing, his fellow soldiers turned their radios towards the woods where their enemy were hiding, knowing that they would never attack them during a match: the Angolans were all Benfica fans, too.

It is said that nearly 50 percent of fans in Portugal support Benfica. “Sporting is just for the rich,” says Benfica fan Vasco Gil, a production manager. “The tudos por um that we chant before matches unites us, the Eagle as a Mascot gives us strength and football is our national passion,” says Nuno Rocha, a librarian. “Benfica is the club with the largest amount of members because it historically identifies with the worker.” It is rare to find a family with divided loyalties. “I’ve never met a family that has people supporting both teams,” says economics student Henrique Pinto. “Apparently they do exist, but so does Father Christmas.”

There is a third Lisbon team, Belenenses, who traditionally play at the picturesque Restelo stadium overlooking the historic monuments in the suburb of Belém. Even though their only league success was in 1946, you will still find football passions running high here. The team was founded in 1919 when eight former Sporting and Benfica players decided to form a team to represent their seafront neighbourhood. They chose blue shirts to represent their connection to the sea and became known as Rapazes da Praia (Beach Boys). 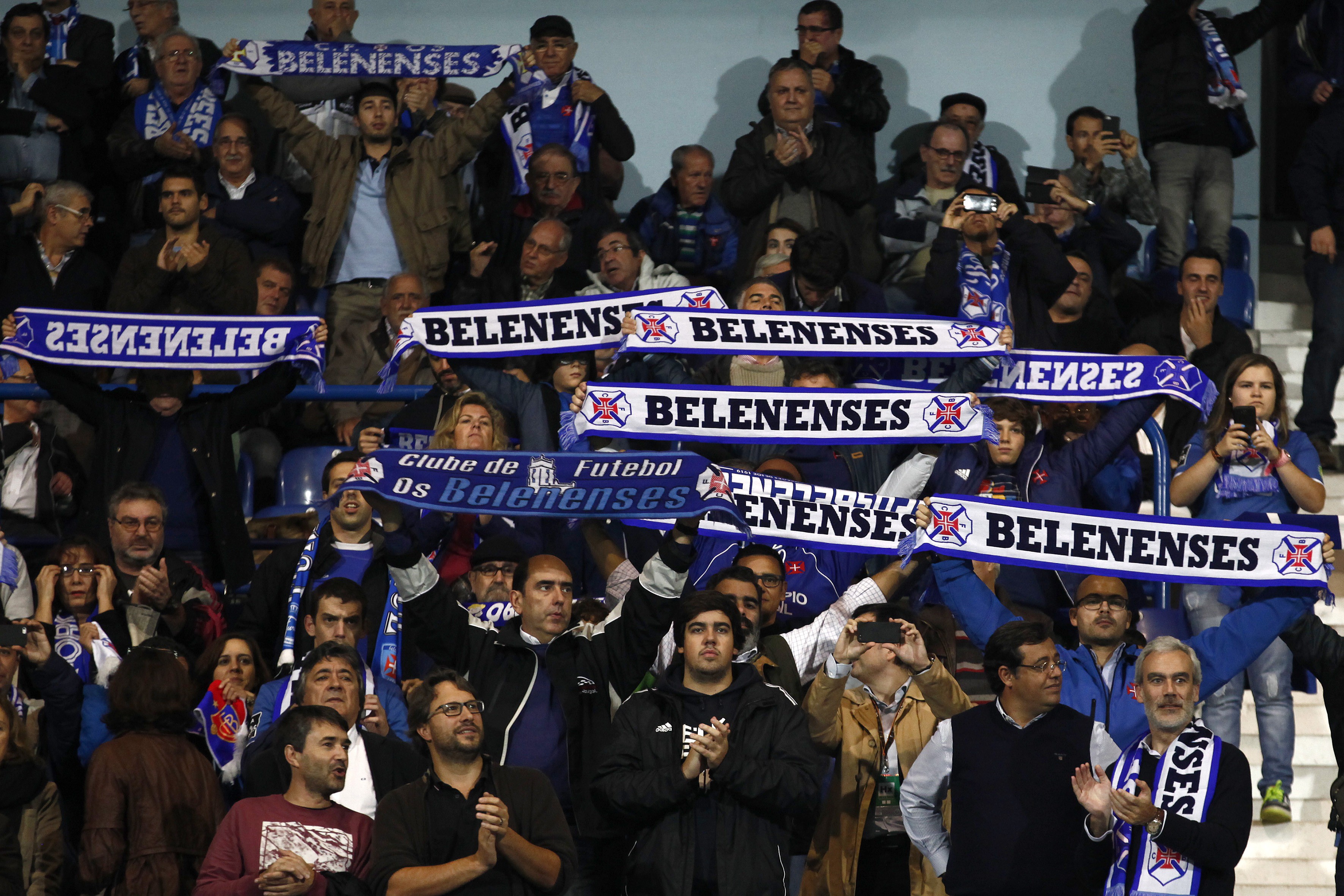 Belenenses might be less well known than their illustrious neighbours, but the team is still well supported in the Portuguese capital | © Carlos Rodrigues / Getty Images

To this day they are seen as the ‘alternative’ team to support in Lisbon. Owner Rui Pedro Soares told Culture Trip, “In Portugal, about 90 percent of the media space and income goes to three clubs [Sporting, Benfica and Porto], creating a largely uneven sporting culture where few prosper. Belenenses, from its foundation, fought against these practices. We are one of the voices of this battle within the Portuguese Football League looking to create the conditions that will allow us, in the long run, to dim the asymmetries that currently exist.”

At the end of the 2017–18 season, the club suffered an acrimonious split as it changed from a public-owned sporting club to a football-only limited company. The original Os Belenenses maintained the right to run other non-footballing sports events at its stadium, while the limited company, known as Belenenses SAD, retained the professional football team but lost the right to play at the stadium.

Horrified fans were determined that their old football club continue as it had before, forming a new football team that can play at the old stadium. Although this new team had to start again in Portugal’s lowest tier, the fans turned up in droves to support them, with attendances of up to 5,000 (far higher than many top league teams get).

Meanwhile Belenenses SAD were forced to play at the nearby National Stadium. Although they remain in the top league, their new limited company status and different home means they rarely get more than a few hundred supporters.

So whichever is the Lisbon team for you, make sure you head to a game during your trip, and see some of the world’s most passionate fans first-hand.