The Netherlands is packed with tulip fields, an enchanting maze of canals cutting through cities, some of the oldest windmills in the world, and unending bicycle paths through towns and countryside. While Amsterdam is usually at the top of the list for visitors to the Netherlands, small towns such as Zaanse Schans and Volendam offer a rare glimpse into much older areas where history is still alive. This is also where many of the best photography opportunities exist.

Whether you’re in the Netherlands searching for adventure, history, or architecture, there’s beauty everywhere here and lots of amazing things waiting to be photographed. 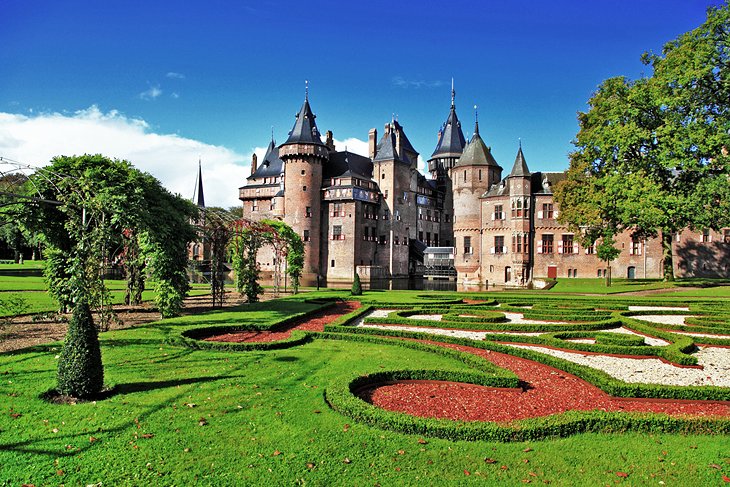 Surrounded by a small lake and 45 hectares of well-manicured parks, De Haar Castle was severely damaged in the 1500s and its garden almost completely destroyed during WWII. It was then completely restored in the late 19th century in a Neo-Gothic style. The castle is home to many fairs during the year, including the famous costume and fantasy festival known as Elfia. 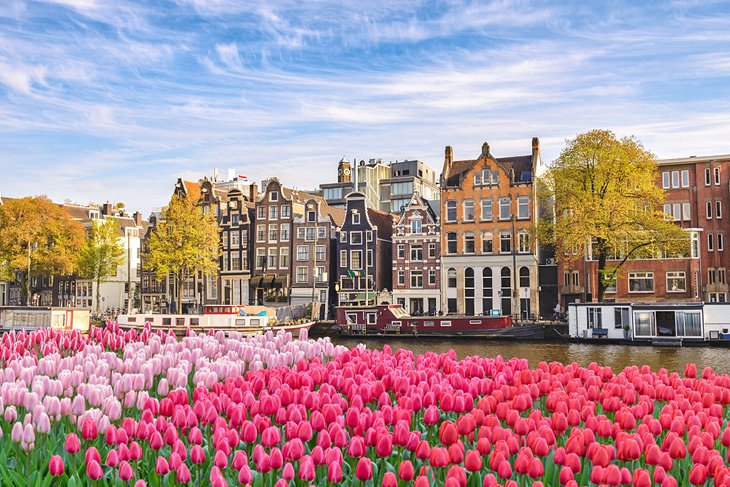 Amsterdam’s traditional row houses-which are colorful, narrow, and skewed because they’re set on wooden poles that have tilted throughout the centuries-are particularly beautiful to photograph at night, with lights reflecting on the water. Most canal houses (known locally as merchant houses or “koopmanshuizen”) date back to the 17th century and the Golden Age of Amsterdam.

Accommodation: Where to Stay in Amsterdam: Best Areas & Hotels 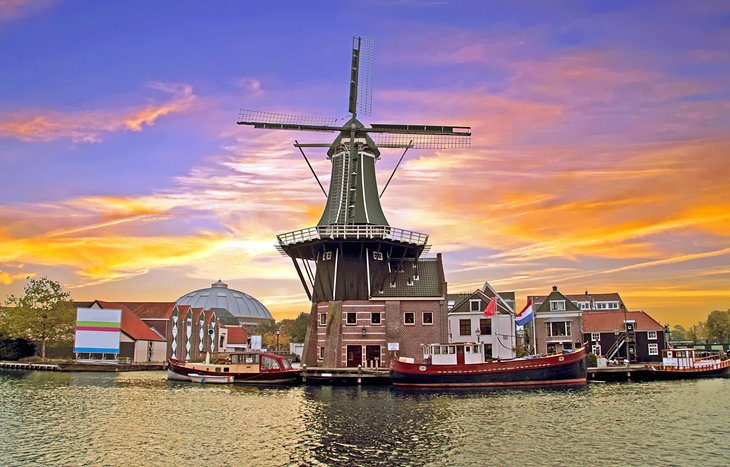 Windmill at sunset in Haarlem

The city of Haarlem, a short 15-minute commute from Amsterdam, is home to colorful architecture and the fully-functional De Adriaan windmill. Haarlem sits on the River Spaarne, near coastal dunes, and has a long history of seafarers and Renaissance and Gothic architecture. 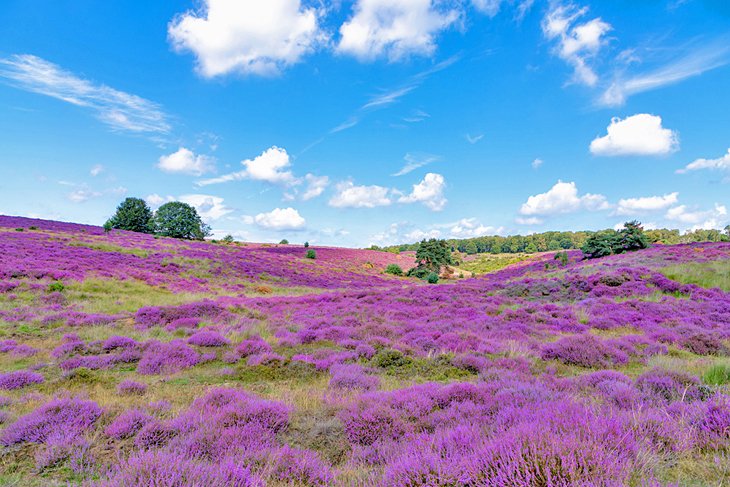 Veluwezoom National Park, the oldest national park in the Netherlands, is particularly striking in summer, when the purple fields of heather are in bloom. Trails cut throughout the park, crossing through thick fern forests and offering many chances for hiking, cycling, and horse riding. The park is home to red deer, wild boars, and many species of birds. 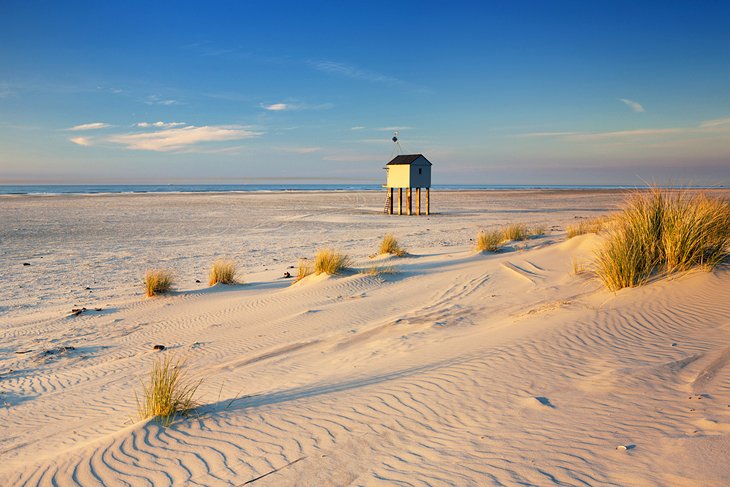 The shores on Terschelling Island are still home to emergency refuge shelters built long ago for shipwreck victims. Much of the island is a nature preserve, covered in both forests and tidal marshes that extend as far as the eye can see. When the tide is at its lowest, it’s possible to walk on the bottom of the Wadden Sea, toes digging deep into the muddy seabanks. 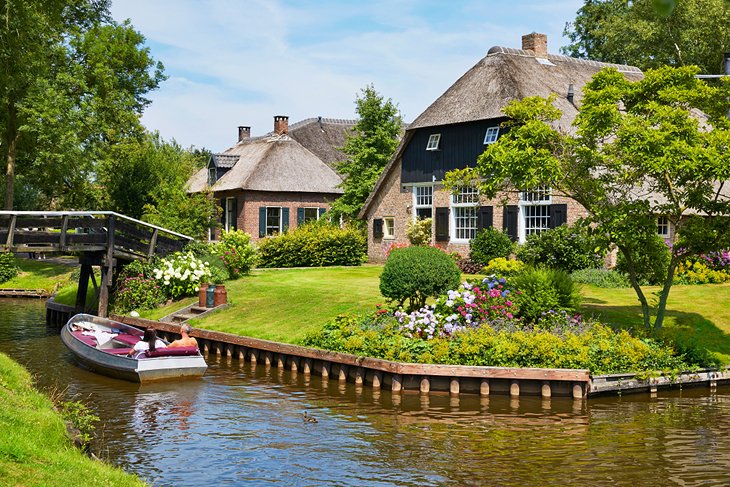 Boats, not cars, connect the canal “streets” in the village of Giethoorn, aptly nicknamed “Little Venice.” The area, famous for its thatched-roof farmhouses and almost 100 kilometers of canoe trails, is also home to over 150 bridges. Bike and hiking trails crisscross over wooden bridges and alongside the canals, allowing visitors to reach cafés and small museums. 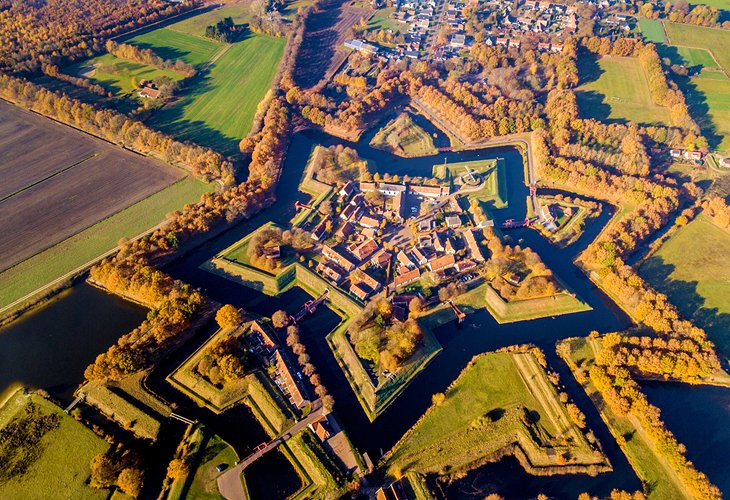 Star-shaped Fort Bourtange was built in 1593 to protect the only road that connected Groningen and Germany during the Eighty Years’ War with Spain. Groningen village, which originally fell within the borders of the fort, now sits on the edge of Bourtange moor, a major natural preserve and special protection area for wild birds. 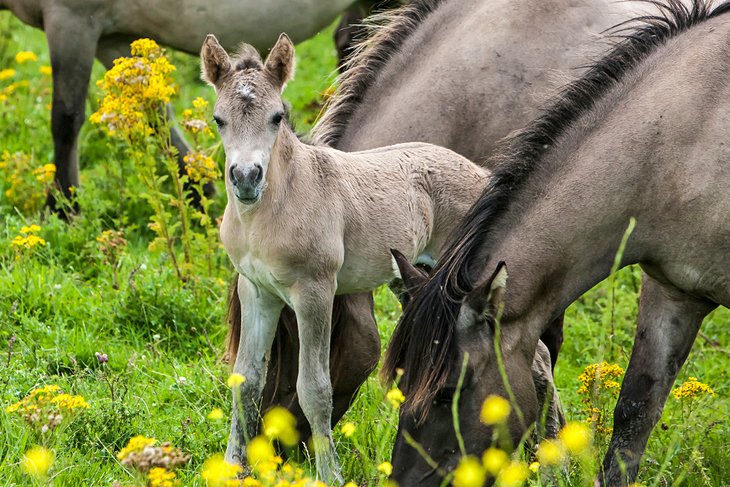 The Oostvaardersplassen nature reserve is unique because of its large population of Konik horses, semi-feral, free-roaming horses that are native to Poland. The area, which is a mix of wetlands and bushy flatland, also serves as a major bird preserve-black storks, white-tail eagles, and the Eurasian spoonbill all call this place home. Only certain areas of the reserve are open to the public to ensure the animals can live undisturbed. 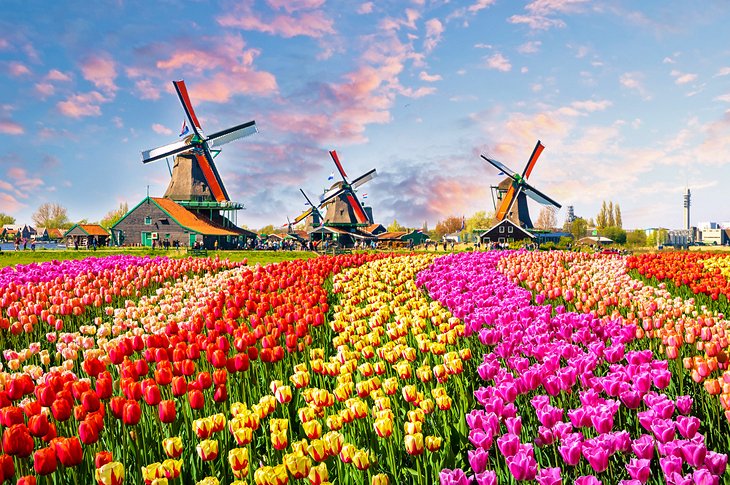 Tulips and windmills in Zaanse Schans

De Kat (The Cat), built in 1646, is the only windmill in the world still in working order that produces dye. This medieval town is also home to seven museums, including a bakery museum and a historic fisherman’s home. 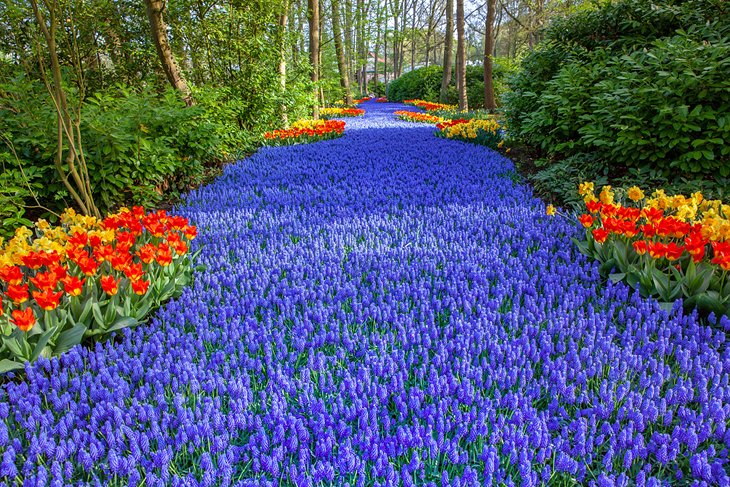 One of the world’s largest flower gardens, Keukenhof Park is covered in over seven million flowers between March and May. The park is particularly busy with visitors during April, when the tulips are in full bloom. Located on former 15th-century hunting grounds, the park covers 32 hectares and is home to a small castle. 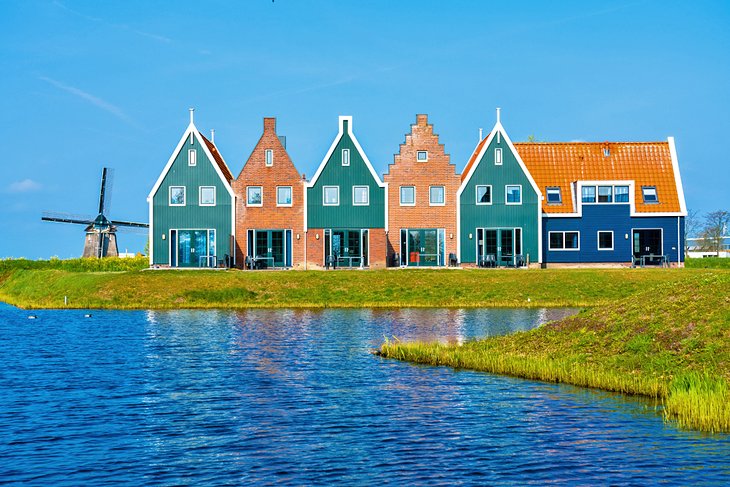 The lakeside fishing village of Volendam is famous for its bright wooden houses and old Dutch ships rocking away on the harbor. This picturesque 14th-century town is famous for its main harbor strip, home to not only traditional row houses but also cozy cafés, a small museum, and outdoor vendors. 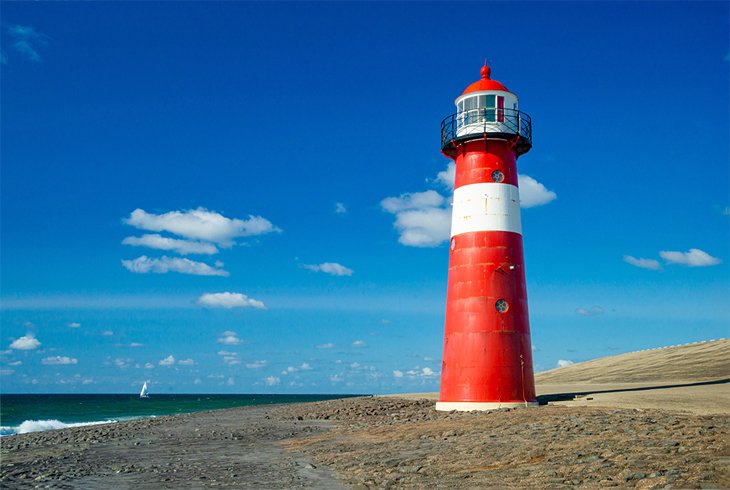 The town of Westkapelle is surrounded by the lulling sea on three of its sides and is home to two active 19th-century lighthouses. White sandy dunes and beach huts line up the coastline and extend all the way to the edge of the picturesque stone streets. Westkapelle sits next to the Noordervroon natural reserve, home to many bird species and a bird observatory. 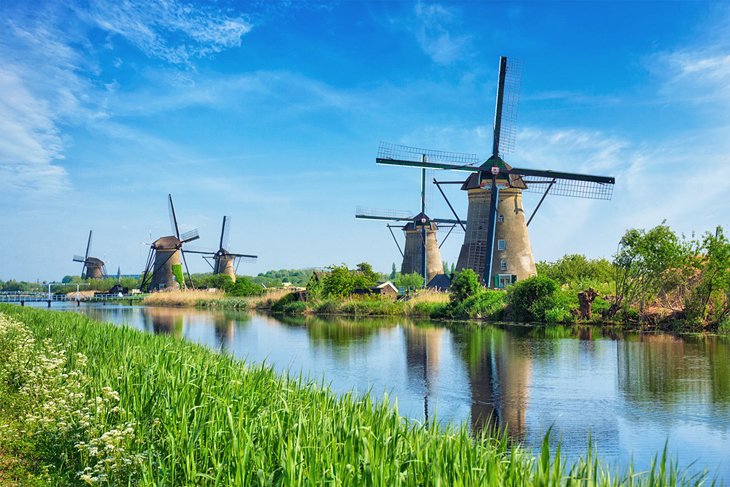 The village of Kinderdijk has the largest concentration of windmills in the country-19 windmills from the 18th-century sit against the river here, in an area designated as a UNESCO World Heritage site. Although they were originally created to manage the water levels and prevent floods, they are now one of the most visited tourist places in the Netherlands. 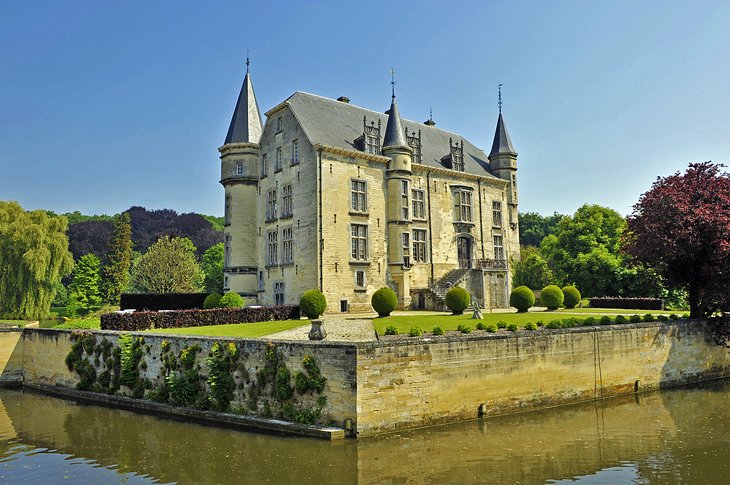 The Netherland’s only hill castle, Castle Schaloen, dates back to the 1200s, although it was destroyed and reconstructed several times throughout the centuries. The town of Valkenburg is also home to several caves that date back to Roman times and the ruins of a castle on top of Dwingelrots (Castle Rock), where you can still see the many secret passageways carved underground leading to and away from the castle. 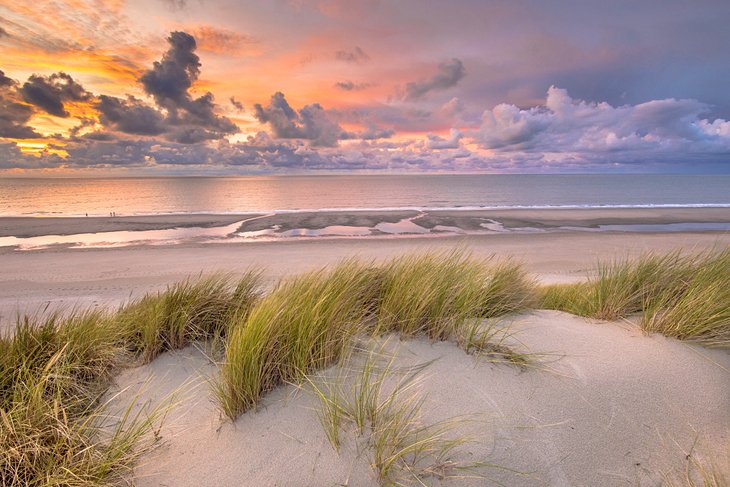 Sand dunes at sunset in Zeeland

Islands and soft beaches looking over the North Sea make up most of Zeeland, the westernmost province in the country. Quiet and unspoiled, this region offers coastal beauty, but also bike-friendly parks, charming villages that still look the same as they did centuries ago, and a strong history of shipbuilding and a relationship with the sea.