The beautiful city of Erfurt is a place with a lot of historical significance. Once home to the father of Protestantism, Martin Luther, it was the place where he grew up at. Erfurt was once part of the Holy Roman Empire and is currently the largest city in the German state of Thuringia. Unlike other German cities, Erfurt was one of the few lucky ones that escaped the destruction of World War II. This means that a lot of its historical architecture and buildings remain intact, giving you a glimpse of the city’s lively past. We’ve compiled a list of the top 10 best things to do in Erfurt that will leave you craving to visit it. The Krämerbrücke is a medieval bridge that is one of a kind. It connects the Benediktsplatz and Wenigemarkt and is aligned with half-timbered buildings on both sides. It was once a major pilgrims’ road network linked to Rome. The bridge is also located along the main route for pilgrims who are on their way to the Camino de Santiago. Despite being plagued by numerous fires over the centuries, the bridge still survives along with its unique medieval architecture. A walk on the bridge is a must for you to experience something from long ago. The Gothic-styled Erfurt Cathedral is one of the most important landmarks in the city. This church is over a millennia-old and is the seat of the Roman Catholic Diocese of Erfurt. The famous Martin Luther was ordained in this very place in the year 1507. The world’s largest medieval free-swinging bell, the Maria Gloriosa, sits up high in the cathedral tower. The interior of the Cathedral is very interesting with many different ancient relics and treasures. The Old Synagogue in Erfurt is one of the most well-preserved medieval synagogues in the whole of Europe. The oldest parts of the synagogue date way back to the 11th century. It was converted into a local Jewish history museum in 2009. They’ve got the Erfurt Hebrew Manuscripts that are important religious texts that date back to the medieval period. The coolest exhibition here is perhaps the Erfurt Treasure. They are widely believed to be the hidden properties of the local Jews in 1349 during the time of the Black Death.

Standing right beside the Erfurt Cathedral is the Church of St. Severus (Severikirche). This church together with the Erfurt Cathedral forms the most important Roman Catholic site in Erfurt. The architecture of the church is considered unusual for a Gothic building. Perhaps the most important relic here is the remains of Severus of Ravenna, the patron saint of the Church. Severikirche was devastated during the town fires of 1472 and over the years, it was remedied back to its original state. The citadel of Petersburg (Zitadelle Petersburg) is another great example of an old monument that stood the test of time. The fortress is said to be the largest and most well-preserved citadel in the whole of Europe. Erected in the 17th century, the citadel of Petersburg was used to repel the Protestant powers. Its strategic location was recognized by the ruling French and the Prussians during the course of history. You can go on a guided tour here and explore the mass labyrinth of tunnels below the citadel. If you’d like a nice place with peace and quiet, head down to the serene Ega Park. It is one of the most beautiful parks in Germany with over 150,000 spring flowers on display. It is also dubbed the place with Europe’s largest ornamental flowerbed. Ignite your senses and discover the beautiful tranquility that lies within. Go for a light stroll here and breathe in nature all around you. Like any other city, a visit is not complete without visiting its town hall. Located at the vibrant Fischmarkt, the town hall originated hundreds of years ago. The first town hall dates all the way back to the 12th century and was expanded until the early 17th century. There are a series of interesting murals inside that depict legend of the old and the life of Martin Luther. You can also take a guided tour inside the town hall where you’ll learn more about the stories behind these murals.

The Anger Museum was founded in the year 1886 and is now a museum with an extensive array of medieval artwork from Erfurt. There’s also a variety of graphic and artistic materials that make up the picture gallery. The building that houses the Anger museum is also interesting since it was made in the baroque era. There are always plenty of exhibitions going on and a guided tour is also available for visitors. 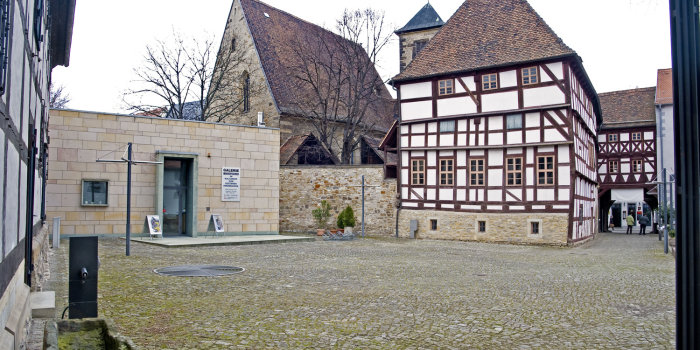 Editor’s Note: There’s no photo available at the time of writing

The Kulturhof is also another interesting building that is located on a medieval road. This building complex includes the main house, a huge courtyard inside, and several other smaller buildings surrounding it. It was once a trading center in Erfurt and is thought to be owned by a Jewish citizen in the 12th century. This place is worth the visit since there are always exhibitions and events being held on its grounds. The Domplatz is a huge market square that houses Erfurt’s most important cathedral and churches. Aside from that, this place plays host to Erfurt’s colorful Christmas Market, which opens during the Christmas season every year. The Martini Festival is also held here every year to honor Martin Luther and Saint Martin. When Pope Benedict XVI came to Erfurt, he also conducted a mass here with over 30,000 people.

With so many historical and cool places to visit, you’ll be left scratching your head on which one to see first. Erfurt is home to many exciting sights so this list is a great way to start you off. So what are you waiting for? Start your trip in the enchanting city of Erfurt.