Vienna takes Christmas seriously, with Advent markets popping up all over town and people merrily drinking glühwein in the shadow of some of the city’s most recognisable monuments. Whether you plan to experience the Austrian capital’s famous musical heritage or shop for artisanal Christmas gifts, these are the best things to do in Vienna during the holidays.

Vienna is said to have one of the longest-running Christmas markets in the world, the Altwiener Christkindlmarkt on Freyung square, and the tradition has grown and grown over time. Wander round Vienna in the run-up to Christmas and you’ll find that seemingly every square is filled with wooden stalls selling warming drinks, maroni (roasted chestnuts), Christmassy food, handmade Christmas tree decorations, handcrafted toys and more. But it’s not just the Advent markets that make Vienna well worth a visit at Christmas; the city sets up ice-skating rinks and hosts popular festive concerts that give an insight into the city’s impressive musical offering, while the streets themselves are decorated with festive light displays, making simply wandering the city a great way to get into the seasonal spirit. 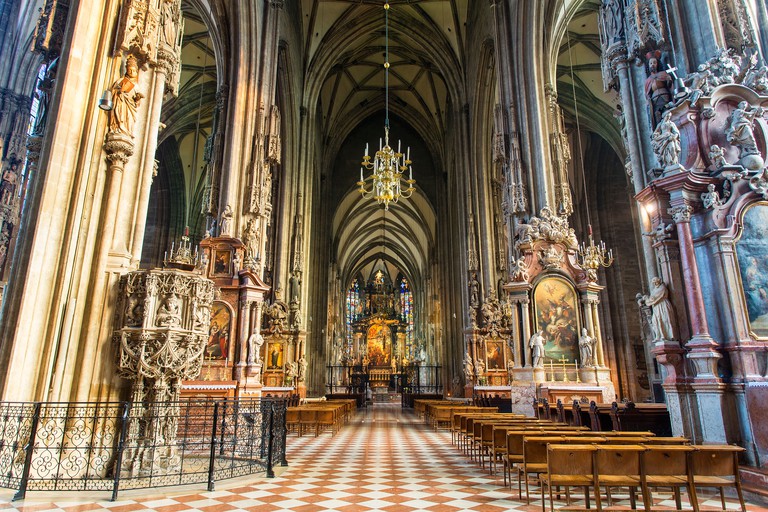 For a chance to see world-class music in the magnificent setting of Vienna’s St Stephen’s Cathedral, take in a performance of the Advent Concert Series, which takes place on various dates in December. Listen to chamber music and Christmas songs provided by the Harmonia Ensemble Wien, which include pieces of chamber music and works by Mozart, Bach, Schubert, and Haydn as well as many popular carols. The cathedral itself, with its stunning blue-and-yellow zig-zag patterned tiled roof, lies in Stephansplatz, right in the heart of the city, with a U-Bahn stop conveniently right outside. The famous cathedral has previously been used for classical concerts and recordings by leading artists, including Sarah Brightman. 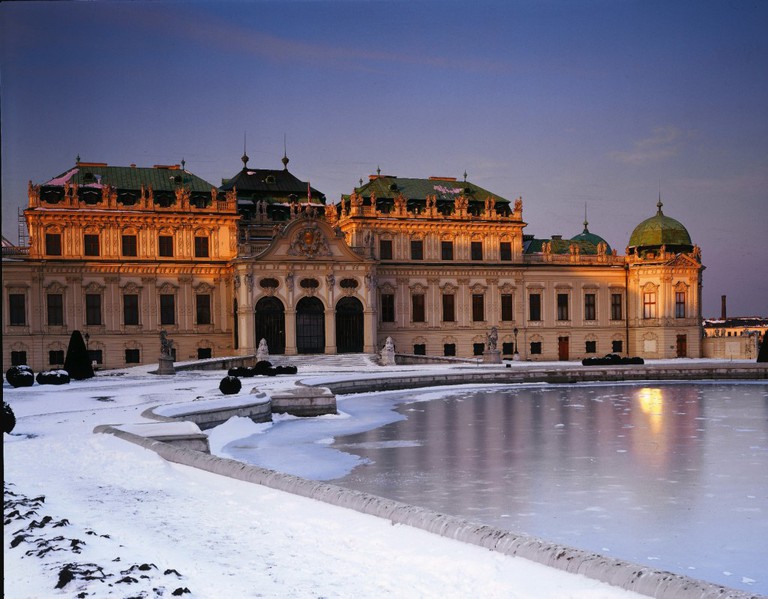 Throughout the spring and summer months, the mirror pool in front of Vienna’s Belvedere Palace beautifully reflects the palace’s Baroque façade. But come October, when the weather cools down and the water becomes at risk of freezing and cracking, the pool is emptied. In the run up to Advent, the dry basin is filled with hay and a small petting farm as part of the Belvedere Palace Christmas Market. During this period, it becomes frequented by children and adults alike, who play in the straw in-between snacking on the Christmas market’s treats, such as heart-shaped waffles or raclette (melted cheese). The Belvedere Palace Christmas Market runs all the way up to Christmas Eve and is one of the newest and least commercial markets held across the city, making it a more intimate fair than some of the bigger markets, such as those outside the Rathaus and the Schönbrunn Palace.

The Museumsquartier is one of Vienna’s great marvels – the area is packed with world-leading art galleries and museums. And each Christmas, the sizeable courtyard between the sites transforms to host an extravaganza of events. The atmospheric square hosts live concerts and DJs, as well as light shows, under a winter canopy. There are also copious amounts of specialty punch served at the event to keep visitors merry and warm. Events take place each year from December 9-23.

Attend the famous New Year concert at the Schönbrunn Palace

The Schönbrunn Palace has been a popular venue for classical music since the days of Austria’s Habsburg rule, and it was the location of the Vienna Philharmonic Orchestra’s very first performance. Tickets for the annual Christmas and New Year concert sell quickly, drawing crowds from across the world. The concert itself features a wonderfully Viennese repertoire, with music from Austrian home-grown favourites Mozart and Strauss, and is performed in the gloriously imperial setting of the Schönbrunn Orangery. There is also the option of purchasing a “VIP” ticket, which includes a three-course dinner and glass of bubbly in the intermission. Today, the event is also broadcast on television and viewed across the world. The palace grounds also hold a brilliant Christmas market, with open-air stalls in the shadow of the grand palace itself and activities such as marzipan creating and Lebkuchen decorating on offer. 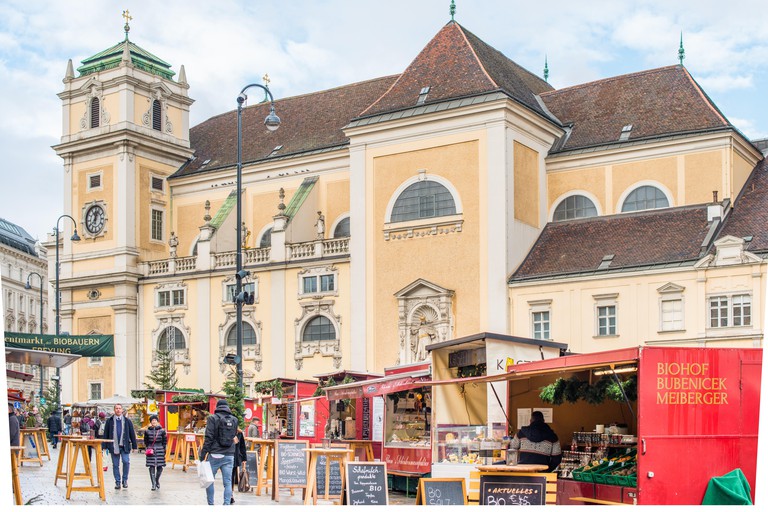 The oldest Christmas market in Vienna, and indeed said to be the longest-running in Europe, the Christmas market at Freyung dates back to 1772. Thanks to this long heritage, it’s a little more traditional than some of the newer, glitzier markets in Vienna. There are Punch and Judy puppet shows for children and music is performed each afternoon after 4.30 pm. The market is also home to the longest nativity scene in Austria. During the rest of the year, the beautiful Freyung square hosts an organic farmers market, meaning that during the Advent period, the food stalls at Freyung are particularly special, serving up traditional cured and smoked meats and cheeses.

The beautiful Wiener Konzerthaus (Vienna Concert House), with its gilded ceiling, hanging chandeliers, and red and gold details, is a fantastic setting for any concert, but at Christmas it’s particularly special. Each December, the concert house draws acclaimed opera singers for its Christmas in Vienna concert, which has been running since 1992. Previous performers have included Plácido Domingo, José Carreras and Luciano Pavarotti.

Ice skating is very popular in Vienna in wintertime, and there are ice rinks set up across the city during the winter months. One of the most spectacular is in the gardens of the Wilhelminenberg Palace and in front of the Rathaus. Around 3,000-metres-squared of skating trails are laid in the area, meaning this isn’t your average pop-up open-air rink. Pre-heated ice skates are available for hire and there’s a practice area that can be used for free until 4pm on weekdays, while later in the evening the area transforms into curling lanes. From mid-January, the rink is expanded, and it stays open until well into the new year, usually closing in late March. 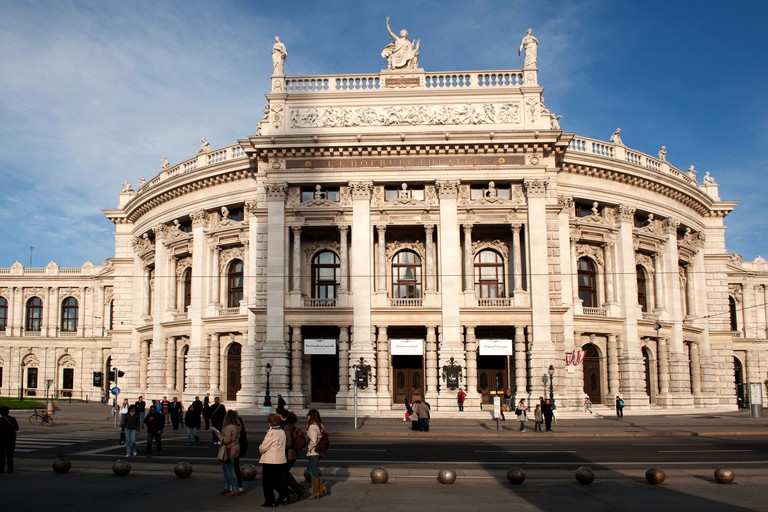 Vienna’s City Hall towers over the Rathausplatz, where a troop of statues surround the square itself. And below lies the biggest Christmas market in Vienna, and boasts over 100 market stalls, selling all manner of goods, from artisan handicrafts to stuffed toys, handmade woollen santas, traditional tree decorations, homemade candles, ceramics and more, all topped by an impressive display of lights and a huge Christmas tree. There are also live performances from choirs and bands. 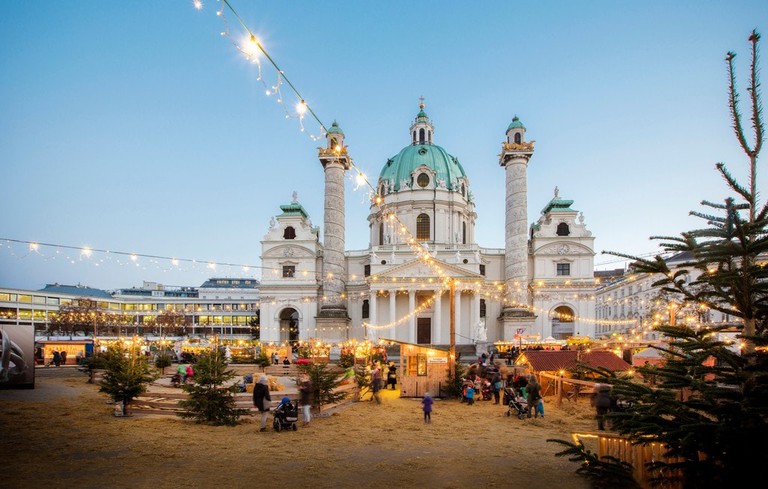 Art Advent, the Christmas market at Karlsplatz on the south side of the Ringstrasse, is run by Divina Art, an association of arts and crafts professionals, and it’s a great place to buy artisanal products in Vienna in winter, including Christmas presents. All of the items sold at the market have to pass a committee and must be made by the stall seller, so you can be assured of the quality of the goods, while the food sold here is organic. There are also traditional cakes, mulled wine and punch, live music, and a live nativity scene for children. All of this takes place in front of the Karlskirche, one of the finest Baroque churches in Europe, built by Johann Bernhard Fischer von Erlach in the 18th century.

Everything You Need to Know about Eating Sachertorte in Vienna