Alright, here’s the naked truth when it comes to n.u.d.i.s.t beaches in Australia. We uncover the top strips of sand to strip off your top, bare all on the best beaches to bare all and reveal the stark truth of getting starkers – no ifs, butts or maybes. If you want to swap your bathing suit for your birthday suit (and not get arrested for it), check out these nine naturist beaches around Australia.

Australia’s first legal n.u.d.e beach hosted three-legged running races (and no, that’s not a smutty double entendre) since 1983 under the ‘N.u.d.e Olympics’ banner until those wowsers from the Australian Olympic Committee forced them to change the name to the Pilwarren Maslin Beach N.u.d.e Games in 2013 – but the new title hasn’t dampened spirits for balloon races, doughnut eating tussles and the hotly contested ‘best bum’ competition each January. Year round, this cliffside beach, which is just half an hour’s drive south of Adelaide, is a must-visit destination for naturists.

Maslin might have achieved legal n.u.d.e status in 1975, but naturists have been flocking to this Eastern Suburbs favourite for decades before bare bathing was legalised there in 1976. The picturesque cove in Sydney Harbour is easily accessible by the Watsons Bay ferry and is bookended by two rocky outcrops for privacy… although stickybeak tourists do enjoy having a peak from the top of the cliffs. Maybe they’re just admiring the city skyline in the distance.

On the northern side of the harbour is the n.u.d.e beach that hosts the annual Sydney Skinny each February, a 900-metre swim unencumbered by bathing suits that aims to empower participants by encouraging them to step out of their comfort zone. On quieter weekends, Cobblers attracts a mixed crowd working on their all-over tan, and just across the road on the other side of Middle Head, Obelisk Beach is an even quieter, gay-friendly n.u.d.i.s.t beach.

Melbourne’s favourite n.u.d.e beach is hidden away near Mount Eliza on the Mornington Peninsula, attracting big crowds of starkers swimmers since it was made ‘clothing optional’ in 1983. Sunnyside North is particularly comfortable for beginners to baring their bum – it’s a 10-minute walk from the car park and sheltered from the nearest non-n.u.d.e beach, so there’s no chance of wandering into the clothed area where even a Speedo is considered immodest.

There’s a very blurred line between which parts of Perth’s premier n.u.d.i.s.t beach are considered ‘clothing optional’ and which parts aren’t, making for a few awkward misunderstandings. However, that grey area was clarified somewhat by signage installed in 2008 and has never discouraged naturists from flocking to this open strip of sand just 20 minutes from the city centre 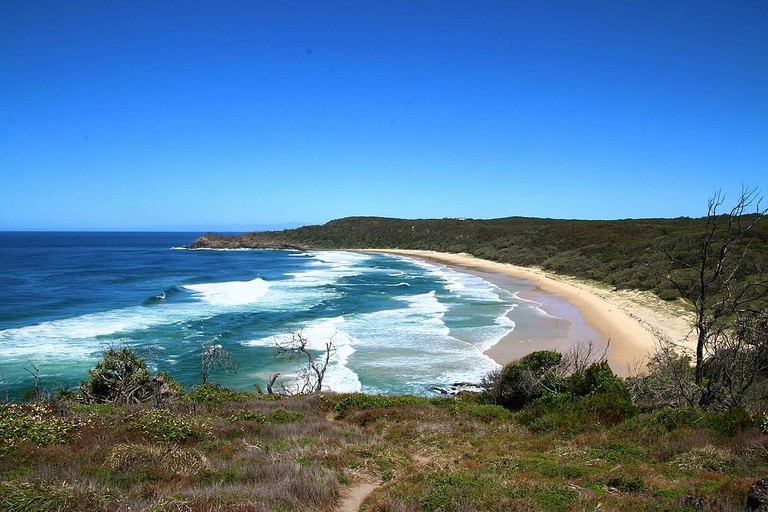 This stunningly remote beach sheltered by the Daintree Rainforest near Cairns is a spectacularly secluded place to strip off… but be warned. Firstly, there are crocodiles and jellyfish in the water. And secondly, Queensland is the only state in Australia without a legal n.u.d.e beach (prudes!), so you run the risk of a fine if you get your kit off – and that’s a serious concern, because it’s very uncomfortable to carry a wallet when you’re not wearing any clothes. Alexandria Bay hidden in the Noosa National Park further south also accepted bare bathers for years without a problem until an overzealous police crackdown in 2016, so n.u.d.e up at your own risk.

Okay, if you strip down on the banks of the River Derwent 364 days of the year, you’ll earn more than a few raised eyebrows – but on the shortest day of the year, you’ll be joined by hundreds of your closest nude friends. In 2017, more than 1,000 participants ignored the four-degree temperatures (and the unforgiving shrinkage that comes with that glacial water) at the crack of dawn to take part in the Dark Mofo Nude Solstice Swim, part of the annual winter festival thrown by the Museum of Old and New Art (MONA), Hobart’s cutting-edge art gallery that’s revolutionised Tasmanian tourism.

A One Week Itinerary to Victoria, Australia

15 Top-Rated Attractions & Things to Do in Hobart