Built for the 1998 Lisbon World Exposition, simply known as Expo ’98, Parque das Nações is one of the city’s most modern neighborhoods. The long boardwalk is a favorite strip, where locals walk or run along the Tagus River, and is lined with a mix of traditional and internationally inspired restaurants and bars, in addition to some lovely contemporary buildings. Here are our top picks for the best contemporary architecture in Parque das Nações. 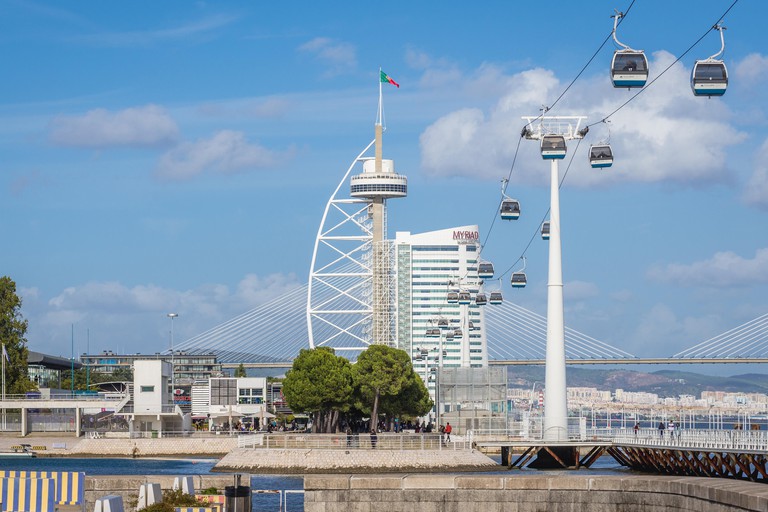 Without a doubt, the Vasco da Gama Tower (Torre Vasco da Gama) is among the more noteworthy landmarks in Parque das Nações, not only for its beautiful architecture but also as the tallest skyscraper in the city. Standing at 145 meters (475 feet) tall, it is a striking building, originally intended to be an observation deck but later converted into a luxury hotel. You will find it shining by the river behind Oriente Station. Unfortunately, only guests of the hotel are allowed onto the observation deck at the top. 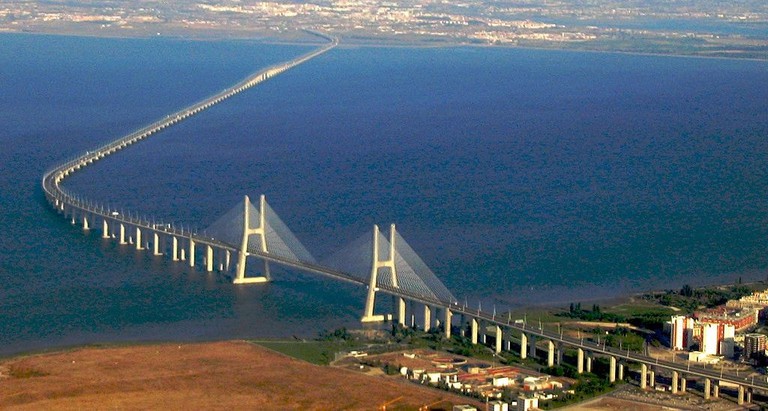 Built just in time for Expo ’98, the Vasco da Gama Bridge is one of two bridges in the city, along with the Ponte 25 de Abril, and connects the eastern side of Lisbon with Montijo across the river. Stretching for 17 kilometers (10.5 miles), it is the longest bridge in Europe and a landmark that can be seen from multiple points in Lisbon—and one of the first sights of Lisbon before landing at the airport. 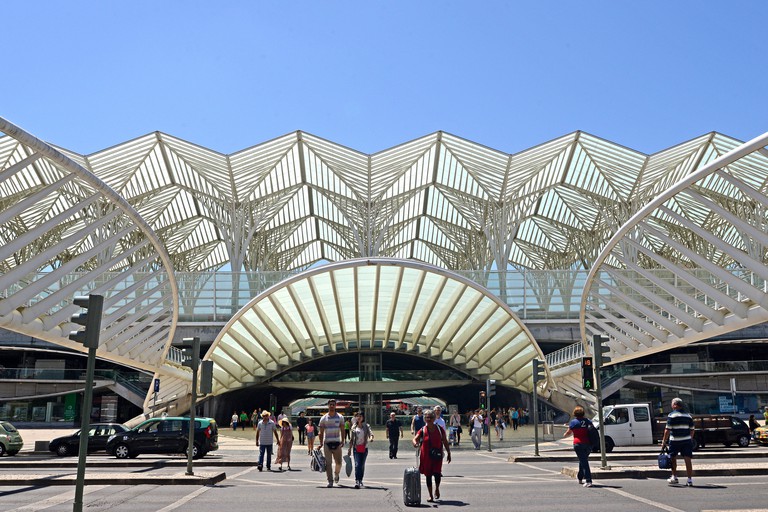 The bright white and arched Estação do Oriente is the main entrance and exit for travelers heading in and out of Lisbon by train and bus. Designed by famous architect Santiago Calatrava, it is locally known as the Gare do Oriente. The maritime theme of Expo ’98 can be seen mirrored in the station’s wave-like beams at the entrance. It comprises two levels: the ground level, where bus terminals are found, as well as cafés, banks, and shops, and the bottom level, where you’ll find the entrance to the metro and trains that run through the upper level. 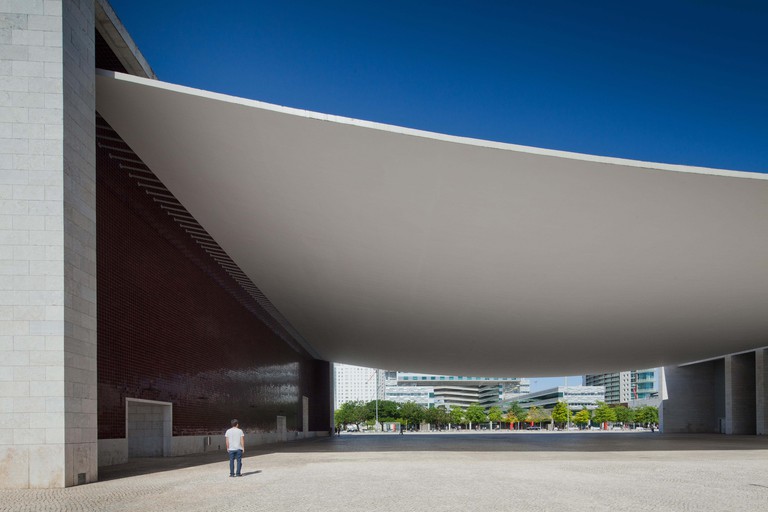 The Pavilhão de Portugal, or Pavilion of Portugal, is a perfect vision of gravity defiance. Designed by Portuguese architect Álvaro Siza Vieira, who also designed the Museum of Contemporary Art in Porto, it was intended to look like a curved sheet of paper balanced between two pillars. The amazing roof, which architect-lovers may revel to stand underneath, weighs an incredible 1,400 tonnes (1,568 tons). The Pavilhão de Portugal is connected to a museum belonging to the University of Lisbon. 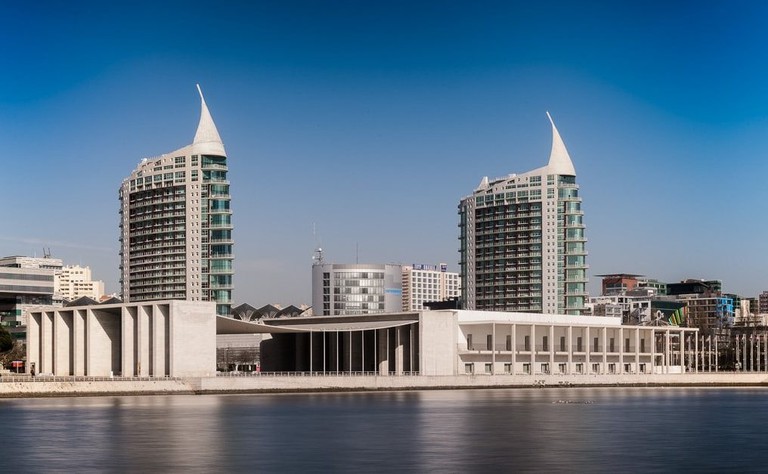 These two twin skyscrapers were added to Parque das Nações after Expo ’98. The first opened in 2000 and the second in 2004. They are a mix of luxury homes and short-term rentals. The identical buildings were designed to resemble the hull of a boat, maintaining the nautical theme of the neighborhood. 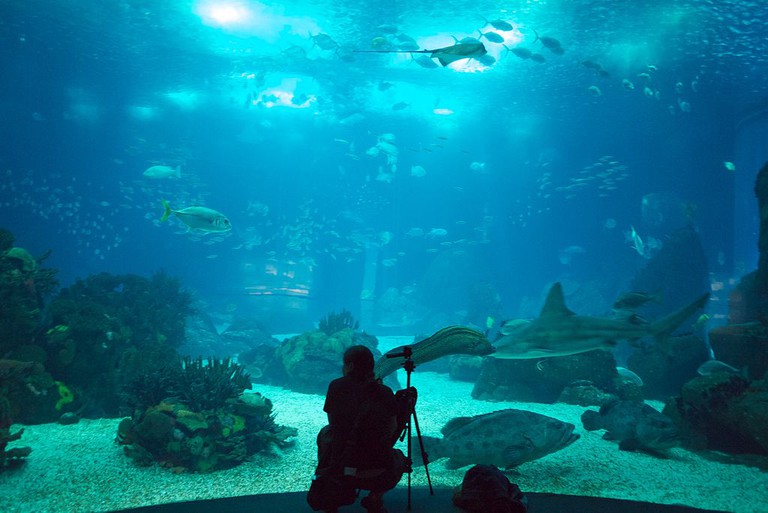 The Lisbon Oceanarium’s circular design centers around a huge indoor tank (the largest in Europe) that allows visitors to get a fascinating view of the aquarium as they head in and out of other exhibits. This way, visitors can get up close to exotic flora, mammals, and invertebrates, while always appreciating the five-million-liter seawater tank inside. The regular admission fee costs €18 (£16) but drops to €15 (£13) for those only interested in seeing the permanent exhibits.

This is one of Lisbon’s largest malls and perhaps the most beautiful. Located across the street from Oriente Station, it is a steel and glass building, with a glass roof, and houses some of the trendiest clothing stores, makeup counters, a food court, a grocery store, and a cinema. Open since 2009, it attracts tourists and locals alike.

The Best Markets in Lisbon, Portugal

8 Customs Only Residents of Lisbon Can Understand