The capital of Australia’s southeastern state of Victoria is globally renowned, too. It’s the world’s second-best city to live in, according to The Economist’s latest Global Liveability Index – where it’s occupied a top-two spot for eight consecutive years.

You’ll fit right in, as 34% of the city’s five million people were born abroad, which is part of the reason why Melbourne contains 140 gloriously varied cultures.

You deserve to find a home that matches the city’s excellent reputation, but with 482 suburbs (that’s what Australians call neighbourhoods) to choose from, it’s not easy. Don’t worry, though – we’re here to help.

Whether you want an area with the best culture, the best parks, or the best chance of finding a bargain property, we’ve got you covered, from Abbotsford to Yering.

The best neighbourhoods in Melbourne for cheap property

Fortunately, there are plenty of affordable areas in Melbourne.

It only takes an average of 18 months to save enough for a 5% deposit in Melbourne, according to Domain – and here are a couple of the best bargains.

This picturesque suburb of 22,000 people was added to the Melbourne area in the 2012 census, and it’s well worth a look if you’re searching for a good deal.

You only have to save up for 54 weeks to secure a 20% deposit on an entry-priced home, according to Domain’s First Home Buyers Report, which shows how affordable the area is.

The average three-bedroom home goes for A$555,000 (£303,000), and allows you access to Bacchus Marsh’s charming hiking trails, orchards, and historical buildings – plus you’re only 50 minutes from the centre of Melbourne. 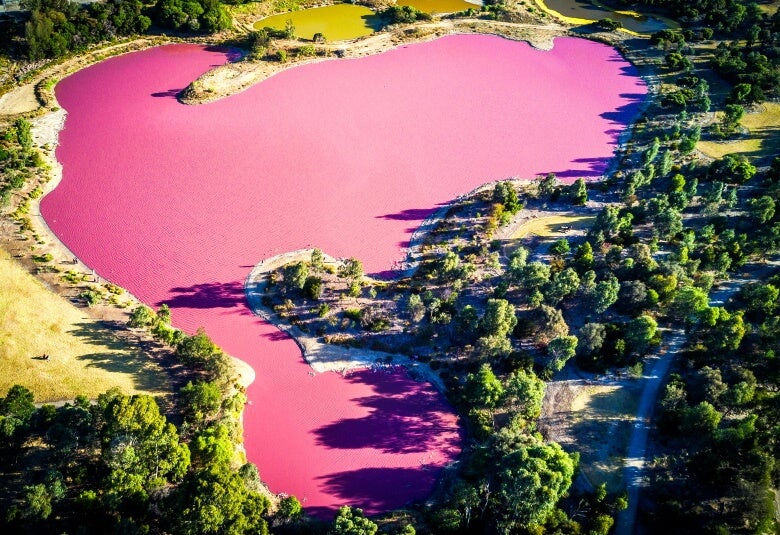 Westgate Park’s pink lake is stunning, and a totally natural result of algae and salt

You can walk the volcanic hills of the Mount Holden Reserve, and see animals like platypuses and parakeets in their natural habitat at the Emu Bottom Wetlands.

Plus, it was in Sunbury that the original Ashes urn was handed to England cricket captain Ivo Bligh in 1882.

The gift was a cheeky reference to Australia’s first victory in England a few months earlier, which had prompted one newspaper to write an obituary that said English cricket would now be cremated and flown to Australia.

The best neighbourhoods in Melbourne for green spaces

Melbourne consciously works to maintain and develop its natural offerings, so you can feel confident about finding a place near lots of green spaces.

19% of the city is given over to nature, which means you’ll have a host of choices.

Only around 1,000 people live in Lysterfield South – because the great majority of the suburb is made up of green spaces.

You can see kangaroos and interesting birds while walking through the 670-acre Churchill National Park, which is never more than a five-minute drive away, wherever you are in the area.

There’s also the lovely Essex Park to enjoy, and you can entertain the kids for hours at the Parkside Boulevard Reserve Playground.

This gorgeous inner suburb just to the east of the city centre is blessed with a number of playgrounds and parks that mean nature is never too far away.

Visit the wide open spaces and excellent playground at Hays Paddock, then spend the next few years exploring every delightful nook and cranny of Victoria Park, Stradbroke Park, Studley Park, and Willsmere Park.

And if you’re so inclined, you can also check out the enormous, 5.9km-long Green Acres Golf Club.

The best neighbourhood in Melbourne for culture

Society can turn its nose up at the hipster wave all it likes – and it does – but taking a trendier approach to an area can have fascinating, wonderfully diverse results.

Fitzroy is Melbourne’s ultimate example of this phenomenon in action. Independent creativity spills out of every pore, from its independent shops and vintage stores to the Rose Street Artists’ Market.

Browse the shelves at the vegan Cruelty Free Shop, grab a meal at the delicious meat-free Transformer restaurant, savour possibly the best croissants in the world (no, really) at Lune Croissanterie, and refuel with – what else? – a coffee at Grace, on Rose Street.

Then claim a spot at Naked for Satan, a rooftop tapas bar that’s become iconic in recent years, before perusing the street art on Johnston Street – but make sure you block out several hours to get lost in the seemingly endless, mesmeric wonder of it all. 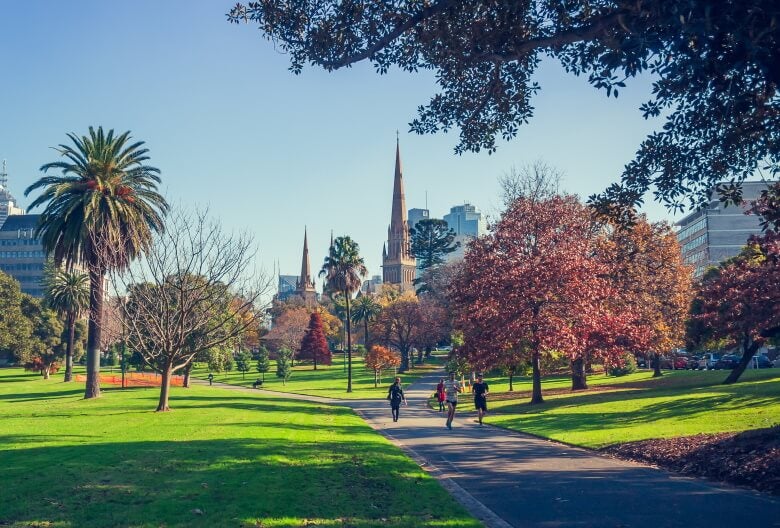 Fitzroy Park is one of the loveliest in Melbourne

The best neighbourhood in Melbourne for food

Don’t try to get a reservation in Brunswick, and don’t expect too much fine dining – but do prepare yourself for some of the best taste sensations of your life, all for a cheap price.

Tuck into Indian street food at Bhang, get your fill of Asian tapas at The Brunswick Mess Hall, cool off with a margarita and fish tacos at the incredibly popular Los Hermanos Mexican Taqueria, and try some modern Australian cuisine at seafood specialists Etta.

Make sure to also visit Bar Idda for some innovative Italian cooking. Get the slow-roasted lamb soaked in conza spice, then thank me and all the events that led you to this delicious, life-affirming experience.

The best neighbourhood in Melbourne for nightlife

This gentrified, hipster inner suburb is the perfect place for a night out.

If you’re after those prohibition era speakeasy vibes, drop by The Noble Experiment and Caz Reitop’s Dirty Secret – or, if you’d rather get a more familiar hit of nostalgia, throw yourself into the arcade wonderland of Pixel Alley (yes, there are games you can play).

Fans of beer have a ridiculous number of options in Collingwood, so go hopping mad and visit The Mill Brewery, Molly Rose Brewery, and the Stomping Ground Brewery and Beer Hall. There’s also The Incubator, a gloriously experimental tasting room that’s staunchly anti-reservations.

Once you’ve had a drink or two, you’ll be ready to see a punk or indie concert at the Tote Hotel – where bands like Fugazi, The White Stripes, and the Cosmic Psychos have played.

And if you don’t like the act that’s on there, Collingwood is full to bursting with live music. We recommend heading to The Gasometer, The Gem, or the Grace Darling Hotel.

The best neighbourhood in Melbourne for schools

Just a 25-minute drive east from the city centre lies the best school district in the city, and one of the best in the country.

And when your children are older, you can choose from nearby five-star institutions like Balwyn High School, Box Hill High School, and Koonung Secondary College – which are all public – and private schools like Camberwell Grammar School and Scotch College.

Finding a place to live in Melbourne

By now, you should have a pretty good idea of where you’d like to live when you move to glorious Melbourne. That’s a massive step.

The next part is finding a home in the right neighbourhood and securing it.

That’s where PerchPeek can help. PerchPeek can provide you with specialists who know the local area, and are happy to talk any time of day.

They’ll help find you a place, get you a viewing, sort out the paperwork, and get you settled in.

Just pop your details in this short form to sign up for a free consultation phone call.

2 thoughts on “The 8 Best Places to Live in Melbourne”