South Australia is mostly famous for its outback landscapes. Often overlooked by tourists, South Australia is actually much more diverse than you think. Indeed, there is a lot of vegetation close to the coastline and the banks of the Murray, Australia‘s longest river, and many hidden gems!

Do you know what are the most famous landmarks in South Australia?

Here is the list of the 17 best South Australia landmarks, natural and man made included!

The Full List of the 17 Most Famous South Australia Landmarks

Although its lands are mainly arid, South Australia offers incredible natural landmarks that are well worth a visit!

Below, discover 9 natural landmarks South Australia has to offer.

Located about 5 hours drive from Adelaide, Remarkable Rocks are probably the most popular thing to visit in South Australia. This incredible attraction is located in the Flinders Chase National Park on Kangaroo Island, the third biggest island of Australia.

Remarkable Rocks is a set of granite blocks sculpted by erosion at the top of a huge dome that plunges into the ocean. 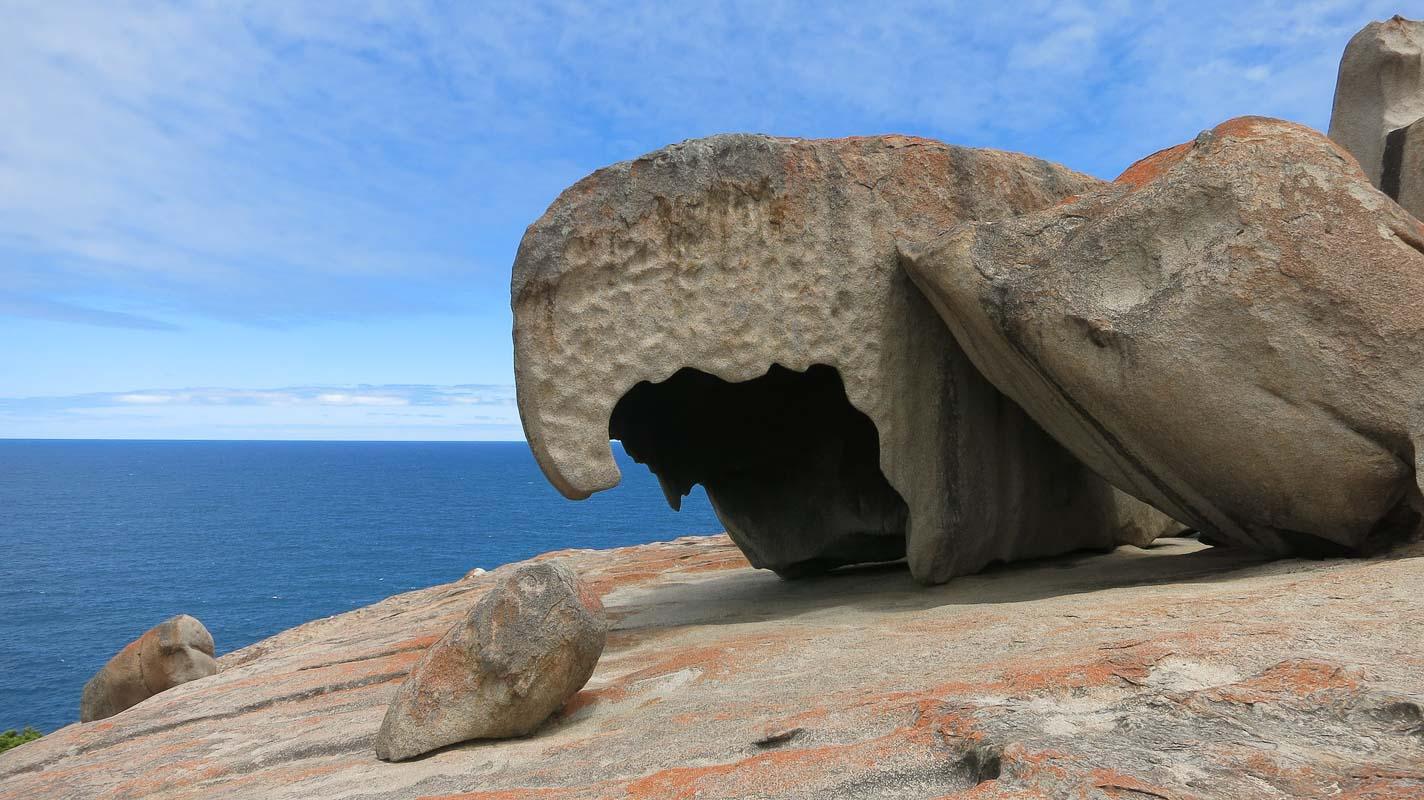 These rocks are spectacular because of their size and shape, but also because of the location: the rocks overlook the entire coast, with incredible views of the surrounding beaches and vegetation.

Among South Australia famous landmarks, Remarkable Rocks is for sure the most iconic!

Fun fact: Remarkable Rocks is the result of 500 million years of wind, rain and pounding waves.

The explanation of its so intense blue would be due to the reaction of several natural materials including crystals present in the rocks. 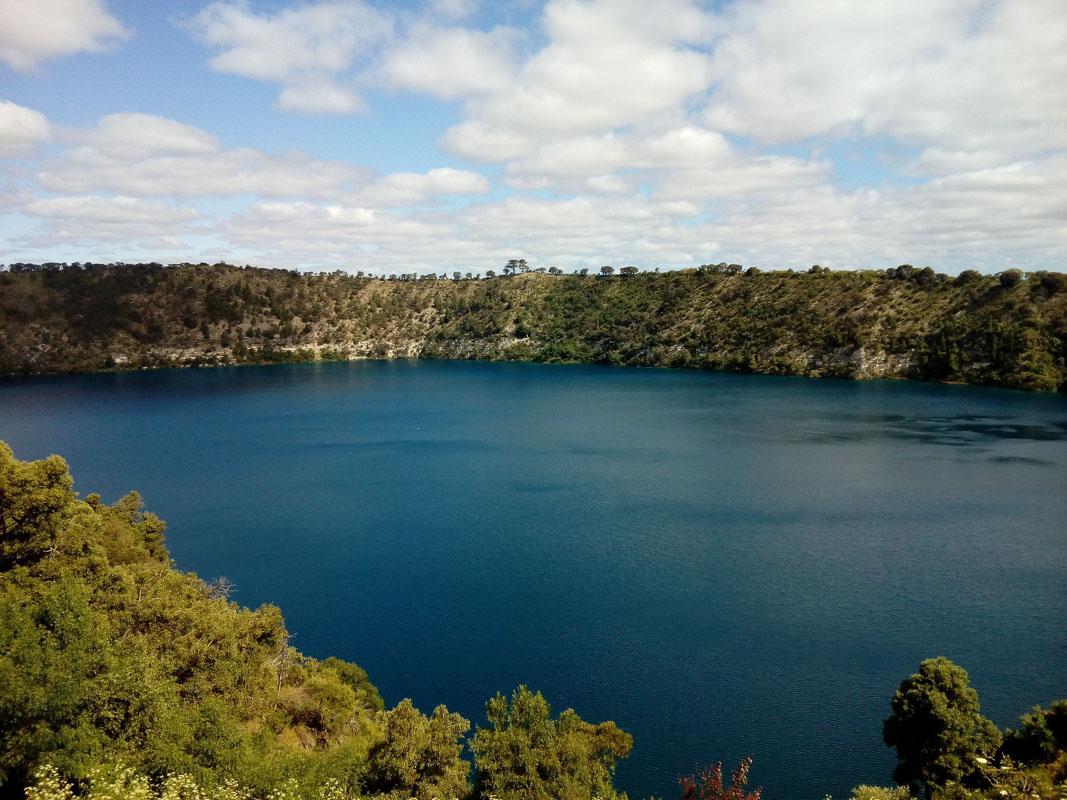 With a circumference of only 5km, you can easily walk around the crater and take breaks at each point of view to contemplate the lake from all sides!

Fun fact: The crater was named “Blue Lake” due to an incredible phenomenon: while in winter the lake is an ordinary blue-gray, it turns into a dazzling turquoise blue when summer comes.

Also known as the Sunken Garden, Umpherston Sinkhole is a massive hole that takes you in another world, where fauna and flora coexist beautifully.

Located in Mount Gambier, Umpherston Sinkhole is the legacy of the Limestone Coast’s volcanic past and was caused by the rock erosion. 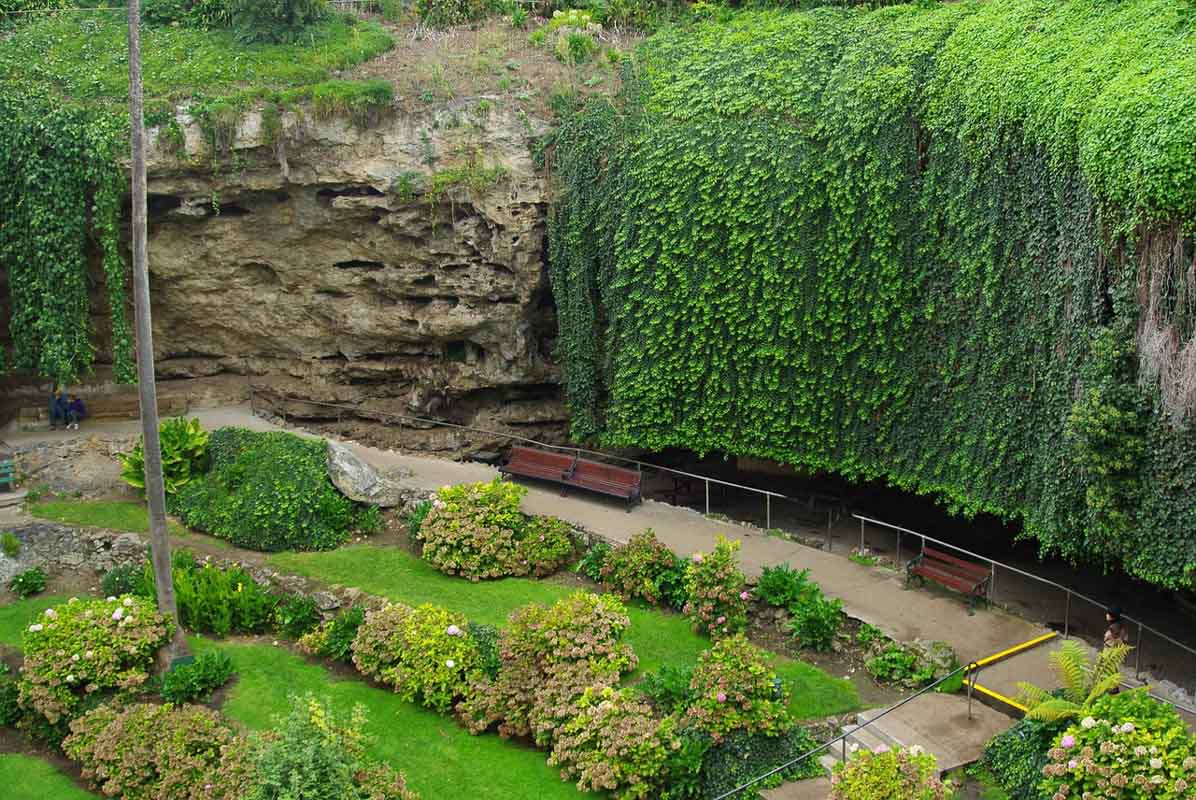 Inside, you can stroll between flowers and palm trees, look at the rocks and meet some Australian possums if you’re lucky.

This is one of the most unique natural landmarks in South Australia, and definitely needs to be added to your Australia bucket list!

Fun fact: The sinkhole was named after James Umpherston who started planting a garden inside in 1886.

Coffin Bay National Park is home to some of South Australia’s most spectacular coastal scenery, from ancient cliffs to long beaches lined with white sand dunes. 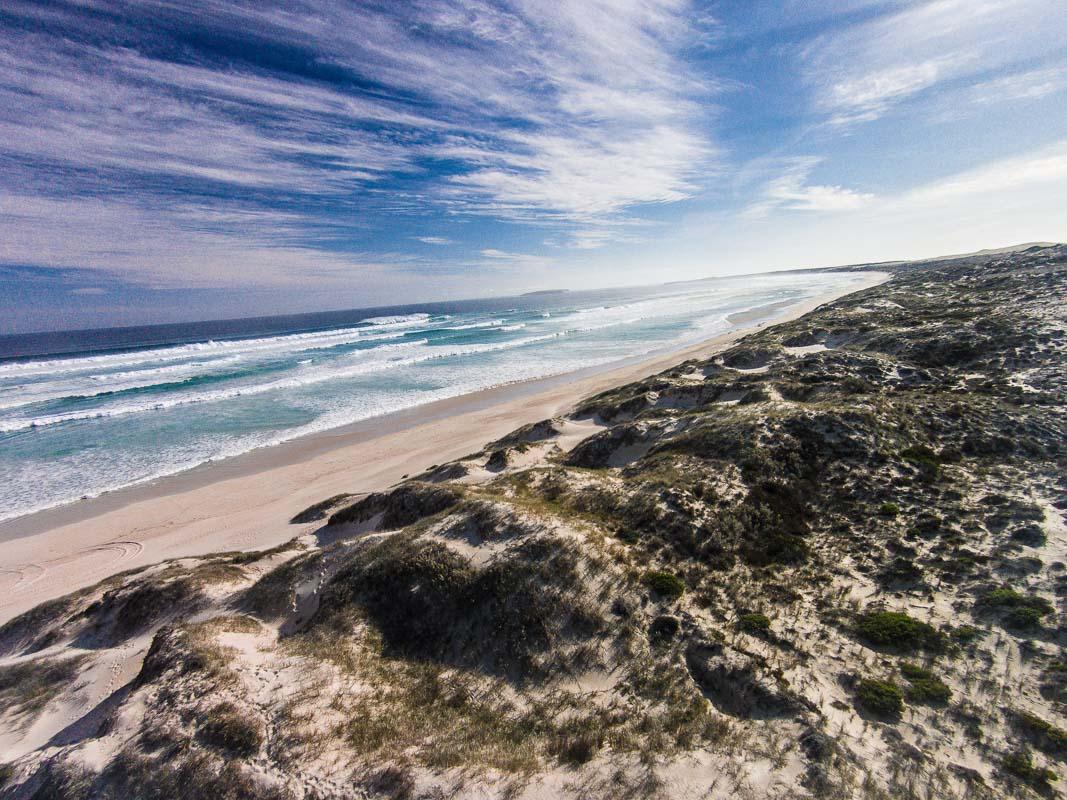 Located at 300km West from Adelaide in the Eyre peninsula, Coffin Bay is the ideal spot to any water activity such as paddle, boating, scuba diving, fishing… Near Point Avoid, the Almonta and Gunyah beaches are very famous for surfing.

Coffin Bay is also a great destination for birdwatchers as you can find many kind of seabirds.

Fun fact: some areas of Coffin Bay National Park are only accessible by 2WD or 4WD.

Naracoorte Caves is the only UNESCO World Heritage site of South Australia.

The caves are part of the Limestone Coast that used to be submerged by the ocean for millions years, that’s why you can observe the sediments remains of this period, including fossils. 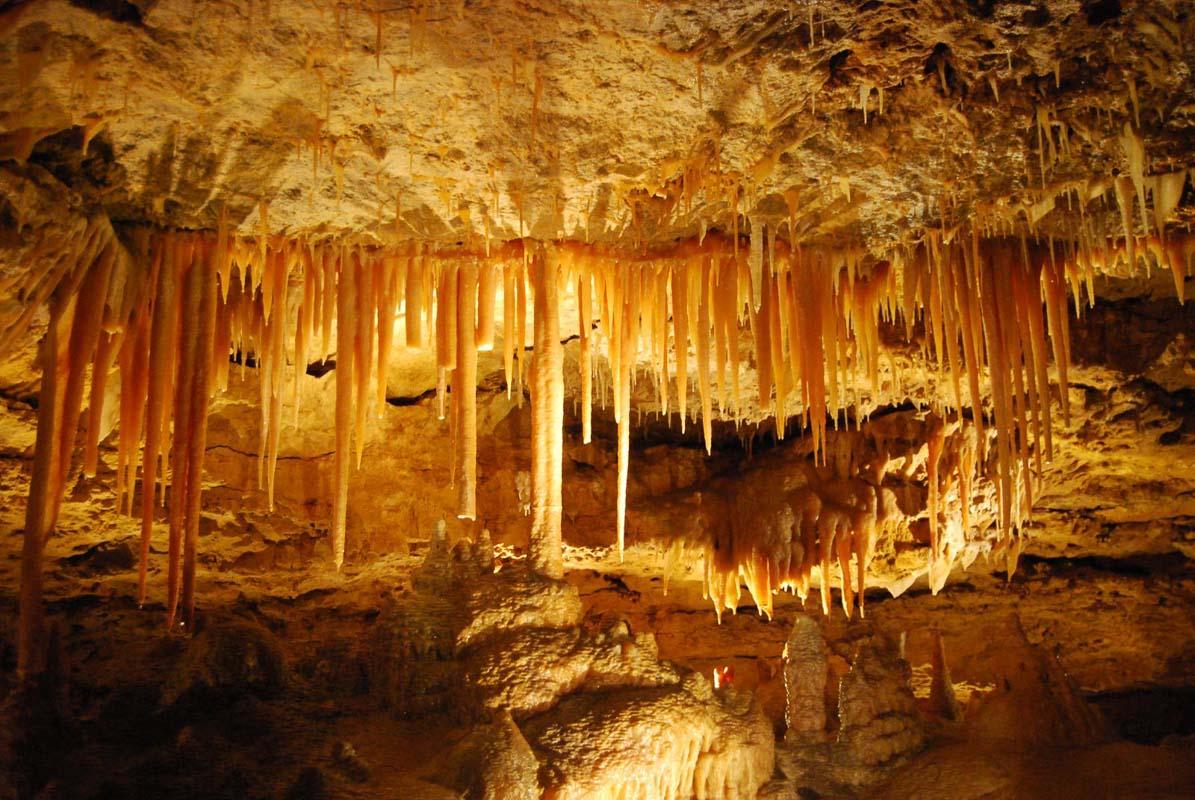 It’s a much visited landmark: one of the most popular attractions in the national park is the Bat Cave where thousands of bats live.

A full hike in the Naracoorte Caves is 2.2km and takes about 1 hour.

Fun fact: The discovery of the Naracoorte Caves was completely random. The story tells that after the herds were scattered by the aborigines, the colons went in search of the lost animals and fell on the caves.

The amazing Ikara-Flinders Ranges National Park is located in the central part of the Flinders Ranges, 450 km from Adelaide and 162 km from Port Augusta. It’s usually accessed via the Wilpena Road that connects Hawker to Blinman. 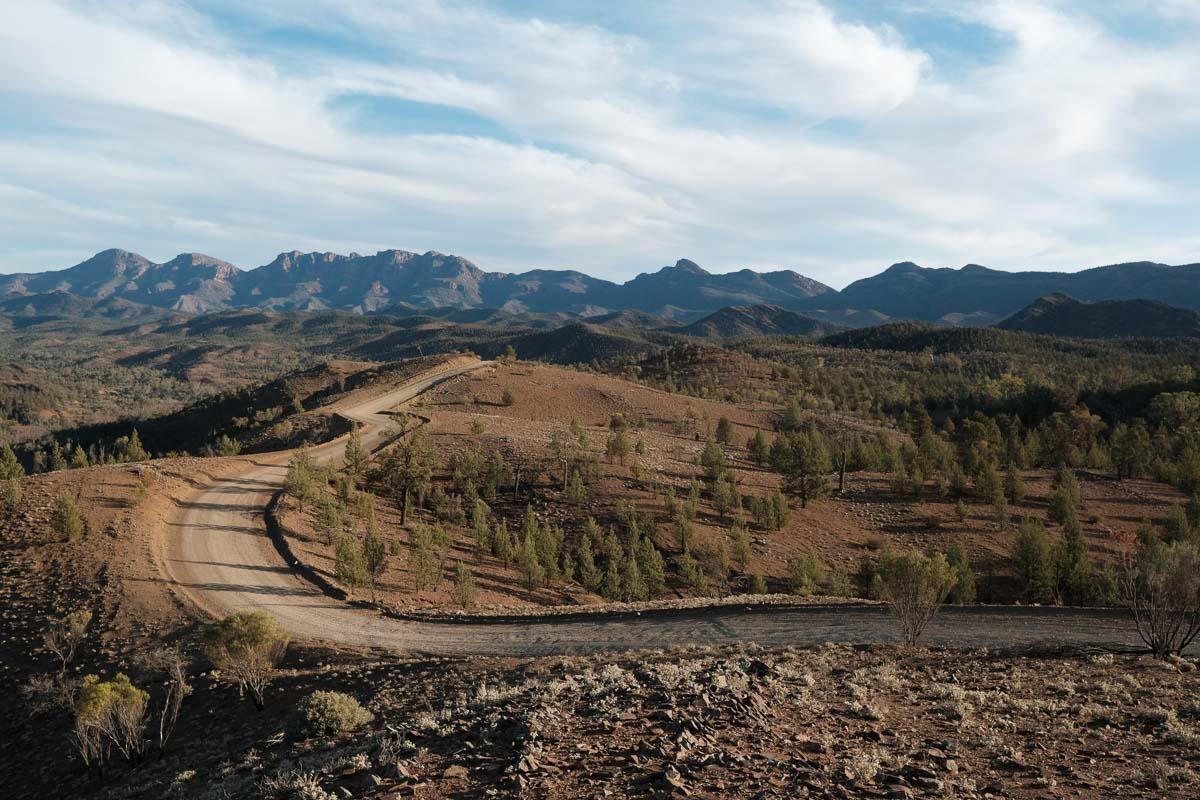 The park’s most renown spot is Wilpena Pound, a natural mountain amphitheater of almost 80km². Seen from below, Wilpena Pound’s red quartzite cliffs create a massive wall of more than 500 meters high.

Bumbunga is a small town located at only 1h40 drive north of Adelaide and is home to this long pink and salty lake.

The lake is known to change color, from pink to white to blue, depending on the salinity of the water at different times of the year. The place is rather deserted and it’s strongly advised not to swim in the lake. 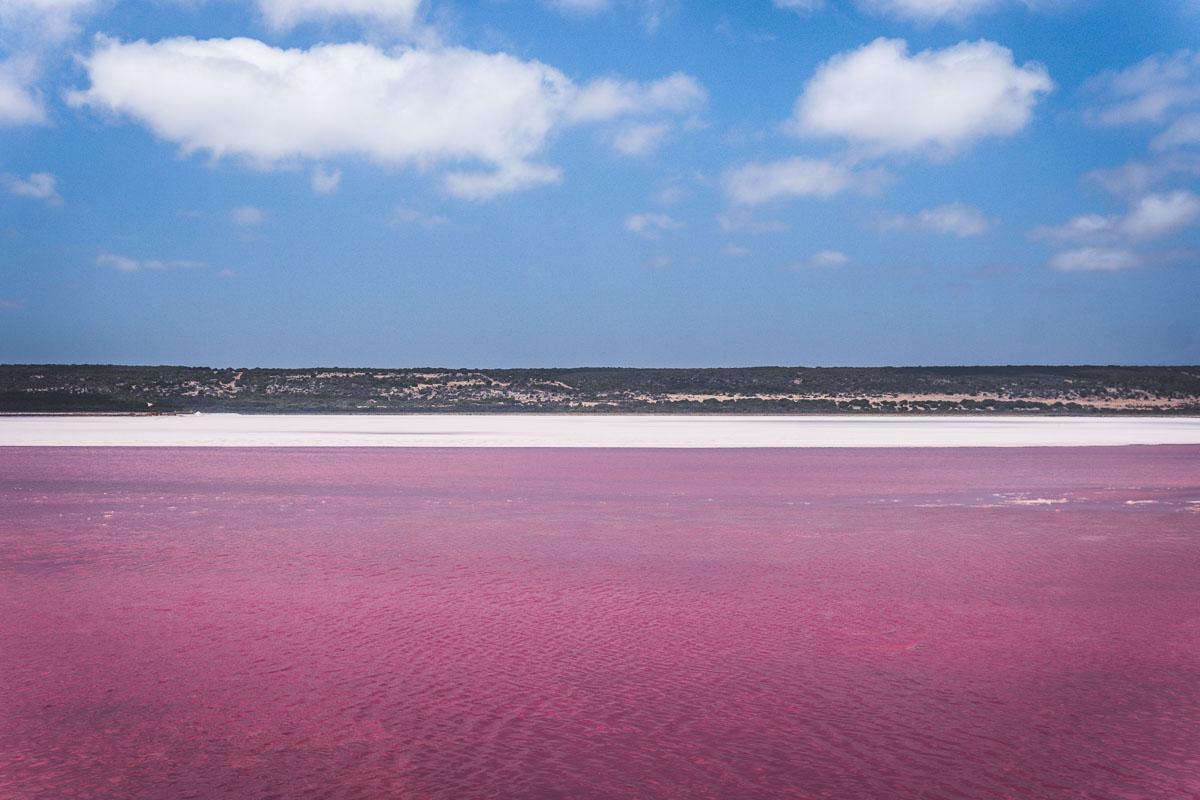 Not very well known by tourists, you will find a certain tranquility there. Indeed, the Pink Lake of Bumbunga is much less visited than that of Lake Hillier in Western Australia, which means you can really enjoy this unique place while avoiding crowds.

Fun fact: The lake is about 14km²and is close to the famous wine region of Clare Valley, offering incredible sceneries.

Located in the Adelaide Hills and close to Piccadilly Valley, Mount Lofty Botanic Garden is a great place to escape the city and get fresh air in an amazing nature. 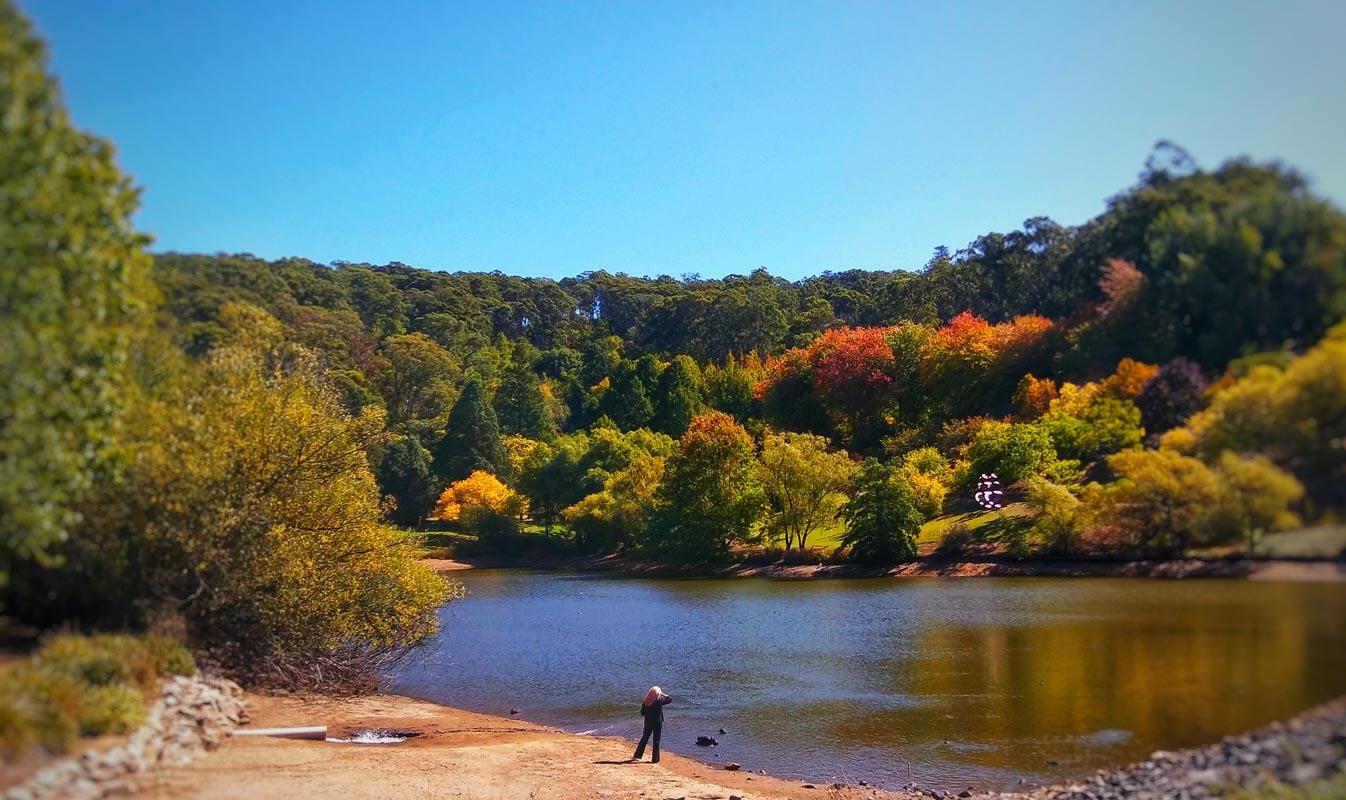 Stretching over 97 hectares, Mount Lofty Botanic Garden changes its face every season: in spring, the garden is totally blooming and you can admire magnolias, camellias and much more; during summer, Adelaide people escape the heat in the shade of the trees while in winter, the garden offers incredible foggy and misty sceneries.

Located 15km North East from Minnipa, Pildappa Rock is also known as South Australia’s “Wave Rock” because of its sandstone waves that are well worth a visit. 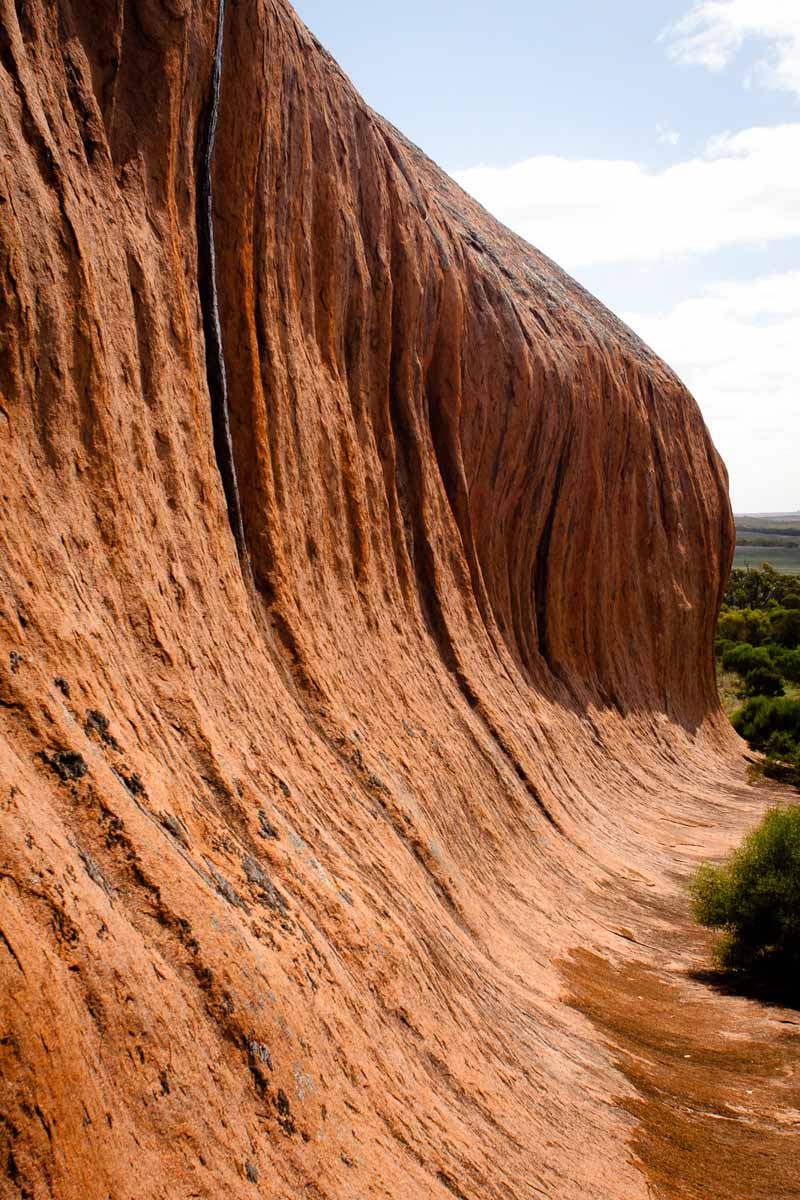 It’s the longest and highest wave formation on the Eyre Peninsula. People can climb on the rock to enjoy great views of the Gawler Ranges National Park. Below, you can find barbecue and picnic facilities.

Fun fact: Pildappa Rock was formed about 1,500 million years ago and belongs to the rich pink granites dating from the Precambrian age.

Man Made Landmarks of South Australia

Here are 8 man made attractions in Tasmania you might have heard about.

Founded in 1869, St Peter’s Cathedral is one of the major landmarks in Adelaide as it’s an important part of the heritage of the city. Besides its architecture that is incredibly beautiful, the cathedral is Adelaide’s mother church of the Anglican Diocese. 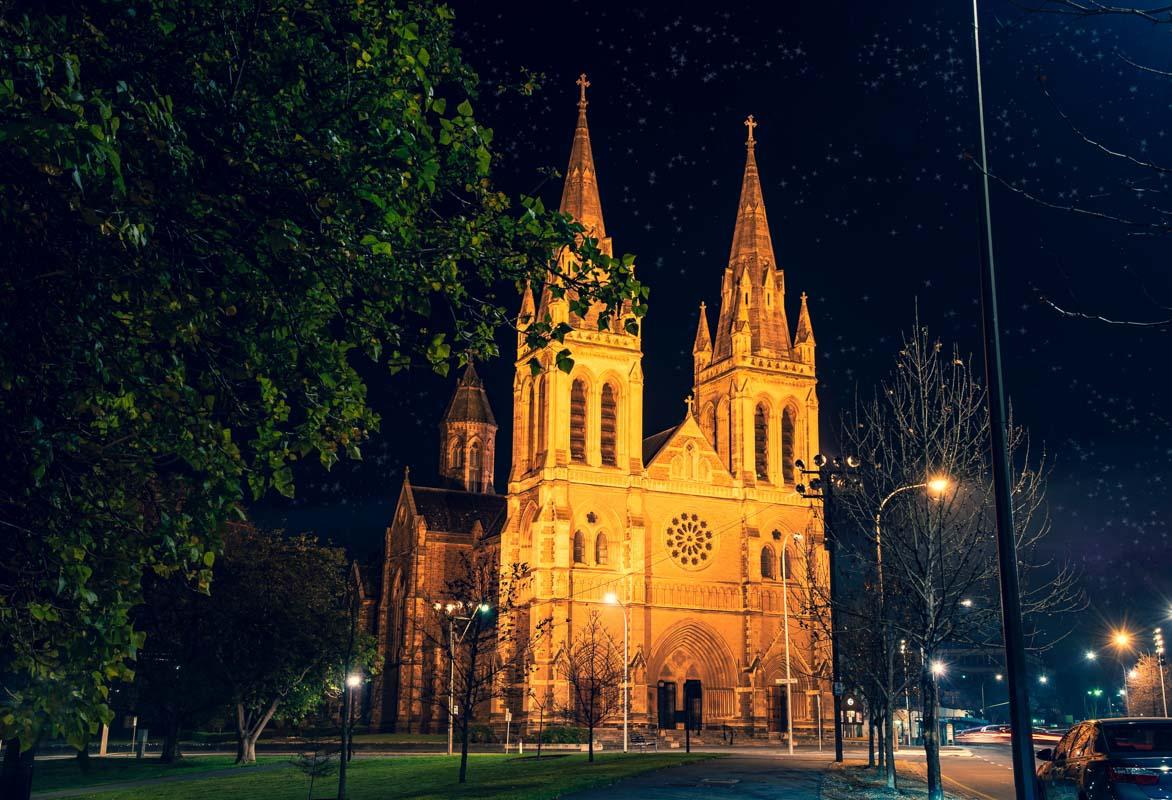 St Peter’s Cathedral is 62 meters long and 51 meters tall. The building was inspired by the French Gothic architecture : the church’s south front is similar to the Notre Dame Cathedral in Paris.

Fun fact: Some stones that were used to build the cathedral are the same as the stones used for Adelaide Town Hall.

Located in the very heart of the city, Adelaide Botanic Garden will let bewitched by the thrilling perfume of roses, near the tropical greenhouse built by the architect Guy Maron. Definitely the best place to escape the heat! 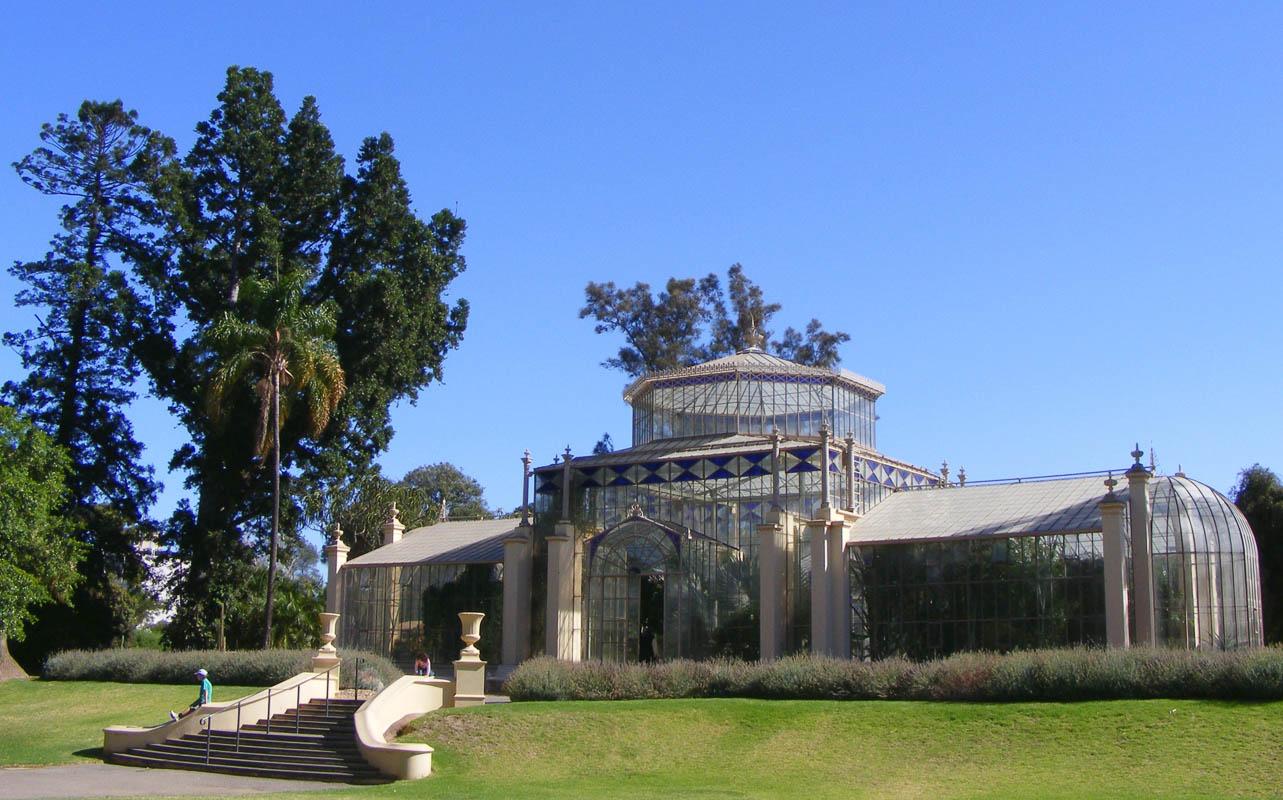 Stretching over 50 hectares, Adelaide Botanic Garden is the largest greenhouse in the southern hemisphere. Tourists can take an organized tour of the garden to get a full experience. You can also relax in the pleasant cafeteria in the middle of the vegetation.

Fun fact: The garden was opened in 1857 and houses many historic buildings such as the Goodman Building and State Herbarium or the Santos Museum of Economic Botany.

South Australian Museum is well known for its rooms and galeries rooms dedicated to biodiversity, ancient Egypt and the Australian explorer Douglas Mawson. But the visit is especially worth the detour for its priceless collection of Aboriginal art. 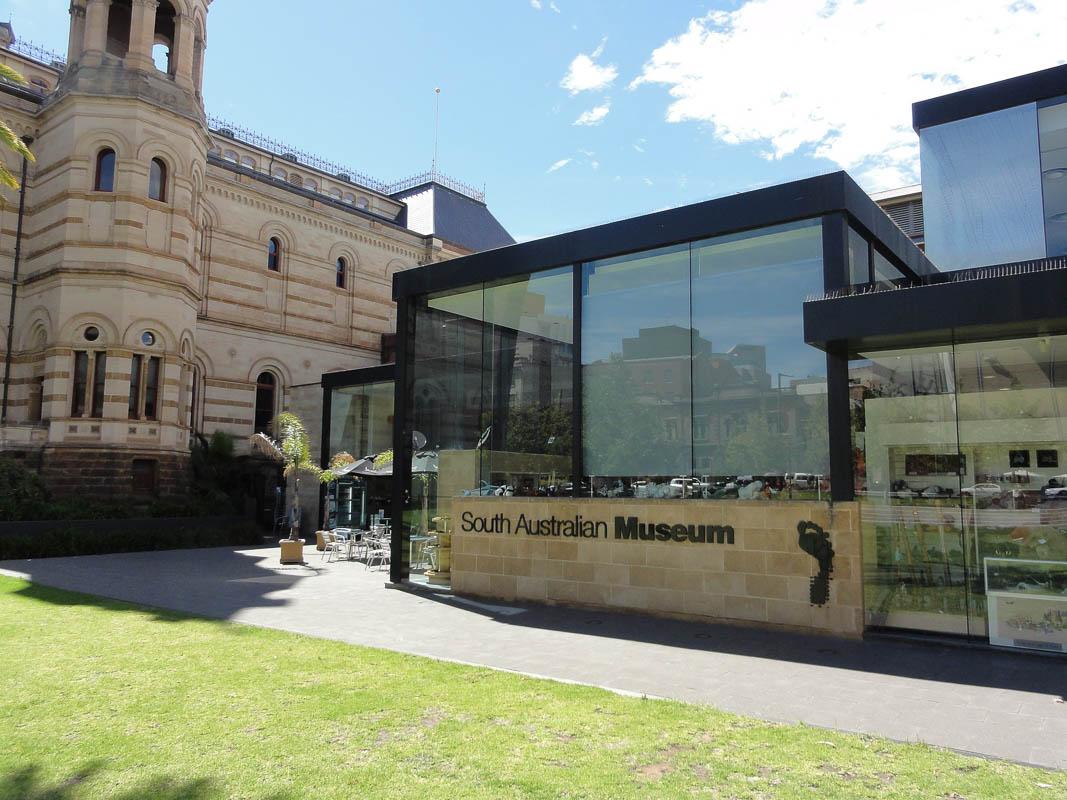 Located in the center of Adelaide, the museum hosts the largest collection of Australian Aboriginal cultural material in the world. Definitely a must-see to know more about Australia’s history! 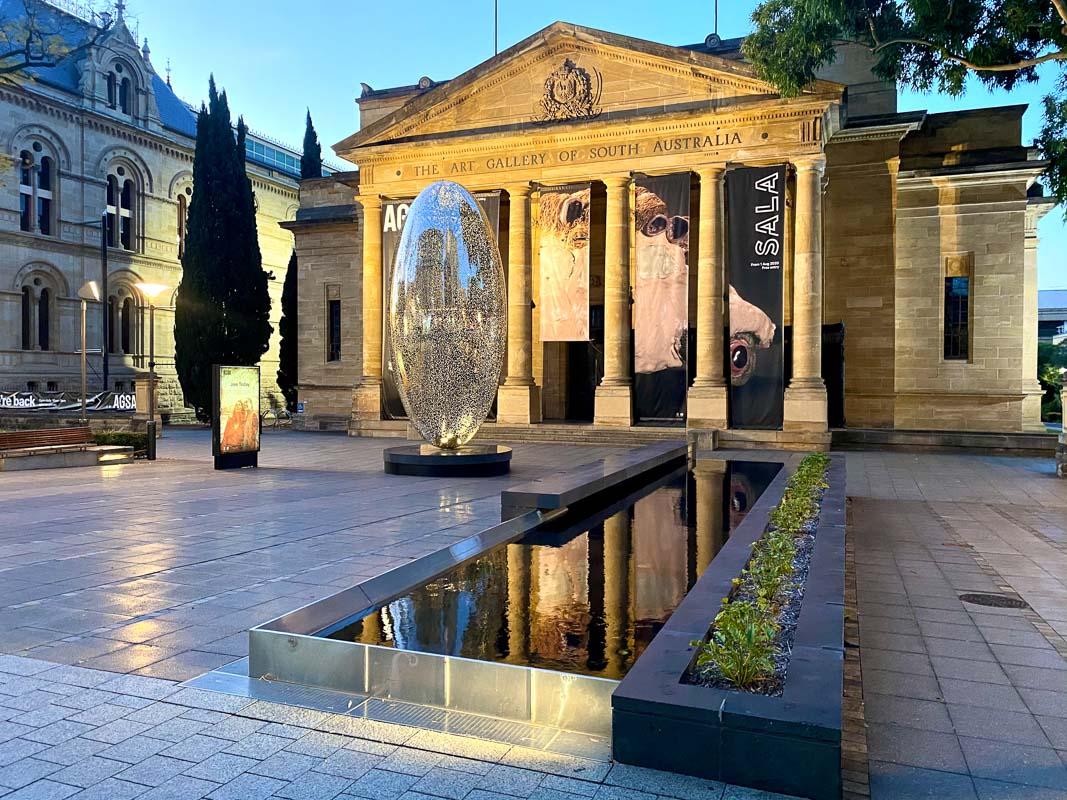 Established in 1881, the gallery welcomes every year about 800,000 visitors from all around the world.

Fun fact: In 1939, the Art Gallery of South Australia was the first state gallery to get an Aboriginal artist’s work.

Renowned for its bush landscapes and wild animals, Cleland Conservation Park along with the Wildlife Park provide a wonderful experience as you can get close to Australia’s wildlife as most of the animals move freely in the 35-hectare park. 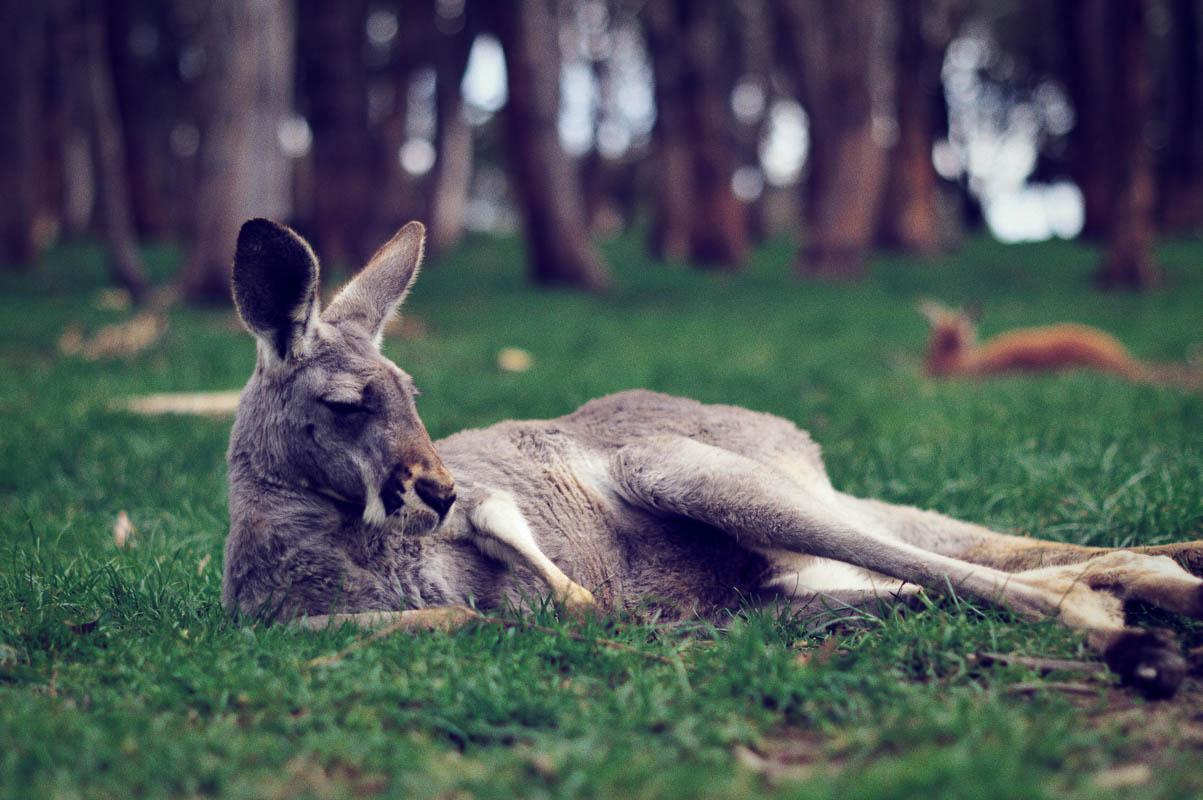 Located in the Adelaide Hills, it takes only 30 minutes from Adelaide’s CDB to get there. If you love hiking, take a morning hike from Waterfall Gully, climb the bush-covered hills to the top of Mount Lofty and enjoy the view of Adelaide. During the hike, you can see koalas and kangaroos if you’re lucky.

Fun fact: The park is home to more than 130 species of Australian wildlife. 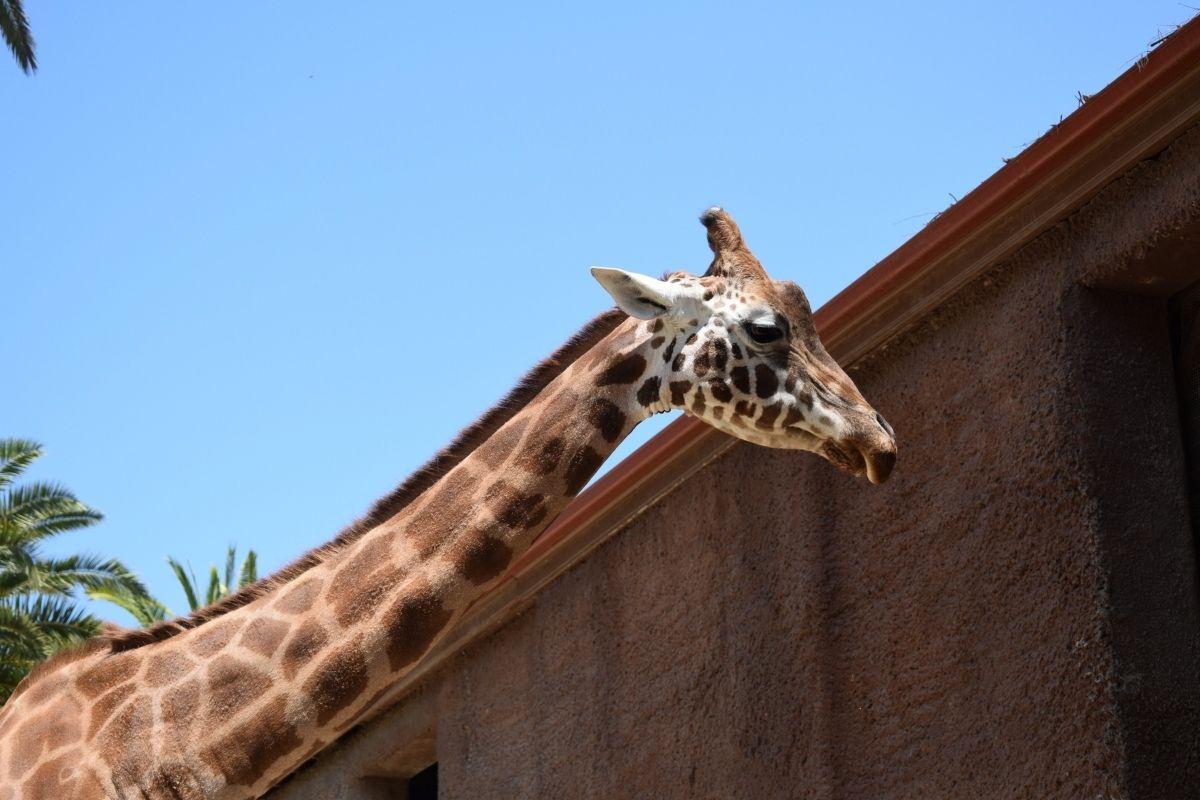 Adelaide Zoo offers a very unique experience as it was designed to immerse people and make feel walking through the jungle among tigers and orangutans.

The Adelaide Oval is a sport stadium located in the center of the city. It’s mostly used for cricket and Australian football and concerts. 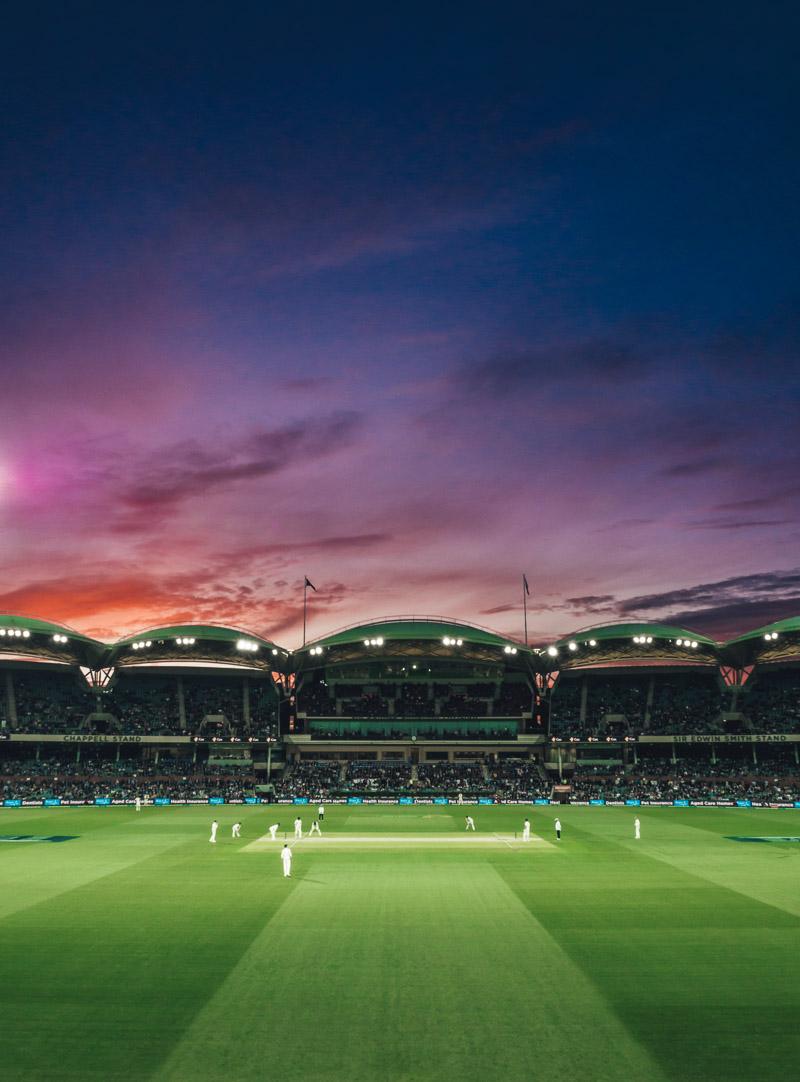 Founded in 1871, Adelaide Oval is the most picturesque cricket ground in the world. The stadium guided tour is a wonderful experience as you can taste the Hill of Grace Restaurant’s food and try the sky high adventure at the RoofClimb.

Definitely the most incredible constructed attractions in South Australia!

Fun fact: Within the Adelaide Oval, no spectator is more than 40 meters from the closest toilet, food or beverage outlet.

Elder Park is Adelaide’s most iconic park. The park is located in the very center of the city on the banks of the River Torrens. The park is famous because of its rotunda that was built in 1882, and the river’s fountain you can see from the park. 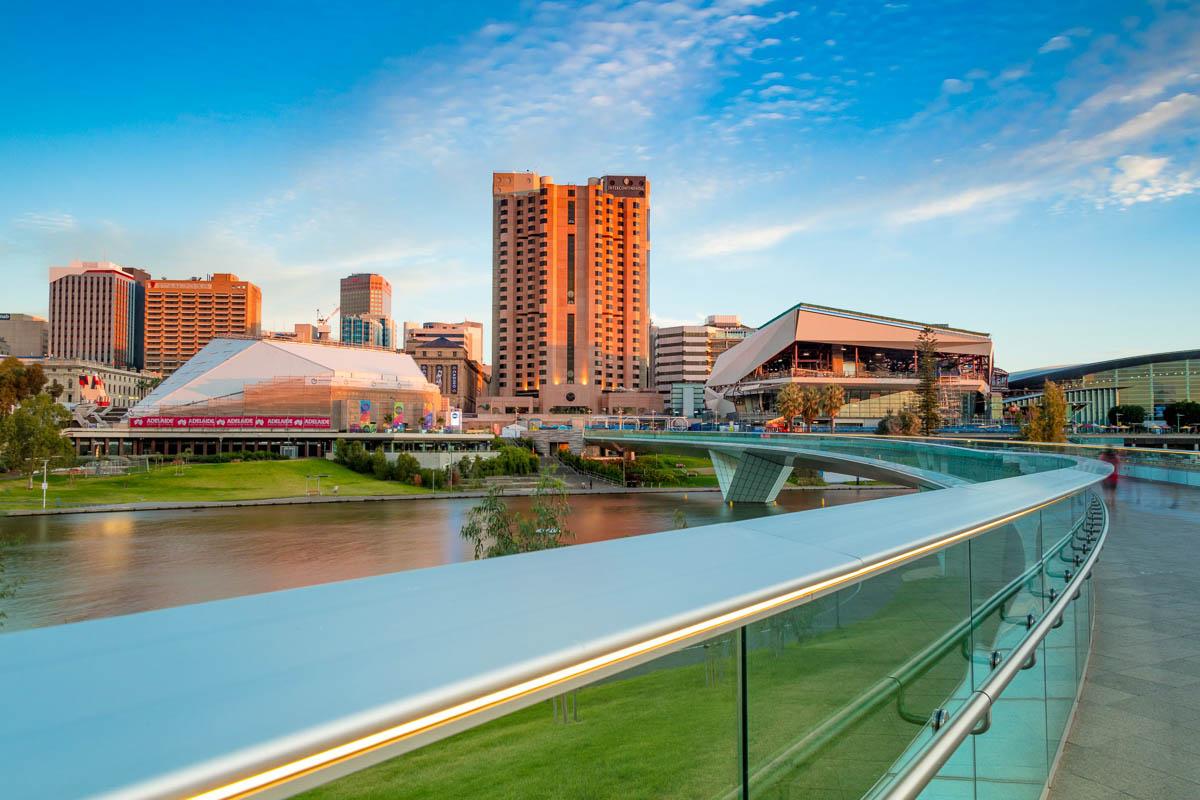 Every year, the park hosts Carols by Candlelight, the Symphony under the Stars, New Year’s Eve, the Festival of Arts and more. Visitors can take Adelaide’s famous boat, Popeye, from Elder park for a 20-minute cruise.

Fun fact: The park was named after the Elder family, founders of the Elder Smith company and Adelaide early settlers.

So there you have them all, the 17 famous landmarks South Australia has to offer.

11 Things You Should Know About Indigenous Australian Culture