Seeing a koala in Australia is a must-do. You can’t go half the way across the world and not come away having seen one of these gorgeous and iconic. It’s really easy to see one in a zoo, but it’s far more fulfilling to see one in their natural envrionment.

What you may not know is that they are endangered. Koalas are difficult to see in the wild and their habitat is getting smaller and smaller. However, if you know the right places you can find one.

Where can I see a wild koala?

These are the best places to see a wild koala:

To make it easier, we’ve grouped the best spots by location – Sydney, South Australia and then Victoria.

Best places to see a wild koala near Sydney

These are the best places to see a koala near Sydney:

Koalas have become really endangered in New South Wales, so unlike kangaroos trying to see a wild koala near Sydney is pretty hard when compared to Victoria, South Australia and even Queensland. We’ve not had too much luck with the completely wild areas (having only seen them in Tucki Tucki), but there are several spots you can try and get lucky. If you don’t manage as a back up there are places you can see rescued or semi-wild koalas in sanctuaries.

Whilst we know of very small populations living as near to Sydney as Campbelltown (45 minutes from the city centre) they would be very difficult to spot so we’ve included some areas that are further away but give you a higher chance of success.

Near Tea Gardens in Port Stephens is the closest area to Sydney where we know several people have spotted koalas, though we have tried and were not so lucky. The place to look is either side of the road in the gumtrees just before the Singing Bridge. Koalas are sleepy in the day time so the best chance to see them would be early morning or around dusk.

Be warned that a large colony of Flying Foxes live in the reserve alongside the koalas so if you plan on heading inside the forest rather than just walking along the perimeter we’d recommend bringing a poncho to protect you from the spray….! 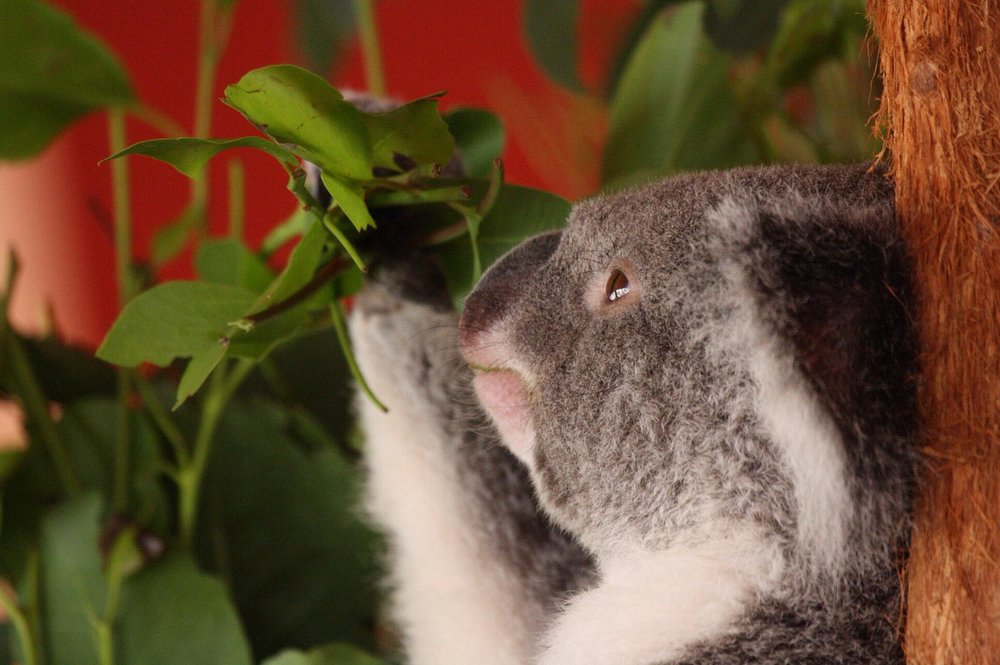 There is also a small tourist information centre in Tea Gardens where we popped in and found out where to look If you haven’t spotted any it would be worth stopping in and seeing whether the locals have had any recent sightings in other nearby areas.

Getting there: Port Stephens is 2.5 hours away by car from Sydney. Like Port MacQuarie, it’s a good stop on any East Coast road trip.

Tucki Tucki nature reserve is our top tip for koalas in New South Wales as we actually saw two here in a short amount of time!

It’s an area that’s small enough to be able to walk around easily and see several of them as there’s a relatively high population for the small space. 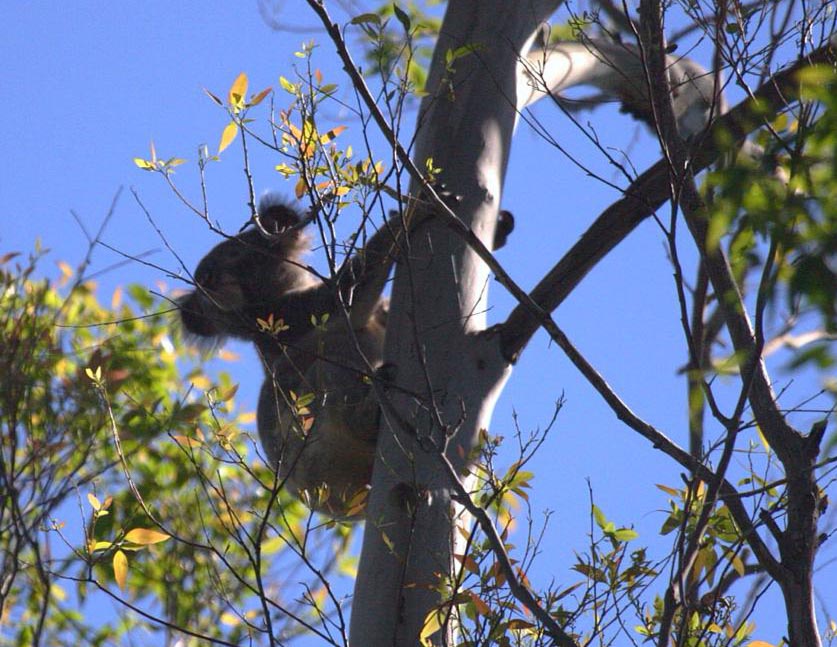 Tucki Tucki would best be combined with a trip to Byron Bay, only one hour away. We visited as part of an east coast road trip and it’s only an hours diversion from the coast road, well worth the trip.

Getting there: Tucki Tucki is about an eight hour drive away from Sydney. The closest place of note is Byron Bay which is an hour’s drive away.

We toyed with putting Tidbinbilla on the list as technically the koalas here aren’t wild, but are in a protected area. We felt it wasn’t a zoo, so was worth putting on the list as it did have a “wild feel”.

As you walk through the gum trees in the koala area you still have to try and hunt them out and we only saw one on our visit so it felt a little more wild than your average sanctuary would. 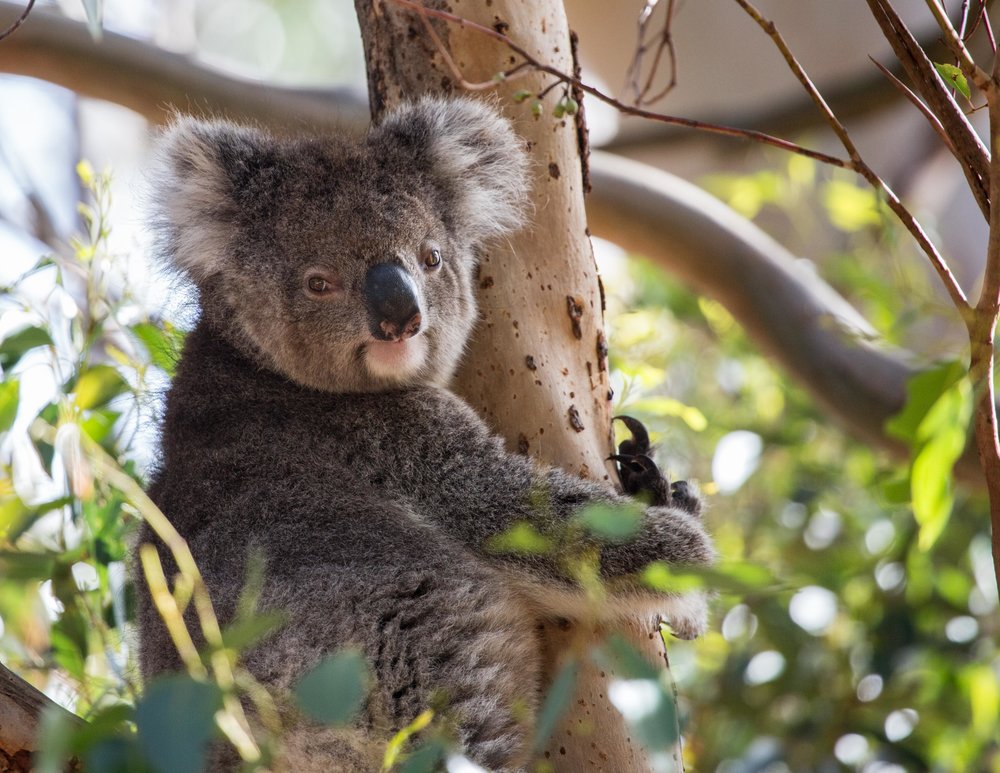 The other benefit of Tidbinbilla is that you can add this into your itinerary for a weekend away in Canberra. Canberra also happens to be the kangaroo capital of Australia and you will see dozens of wild roos on your trip.

Getting there: Tidbinbilla is about 3.5 hours by car from Sydney and 45 minutes from Canberra.

Port MacQuarie is home to the Koala Hospital and a great place to go even if you have been lucky enough to see some in the wild already.

It’s an opportunity to get much closer to them than you would in the wild (unless you are very lucky) and learn more about them, and sadly their plight. 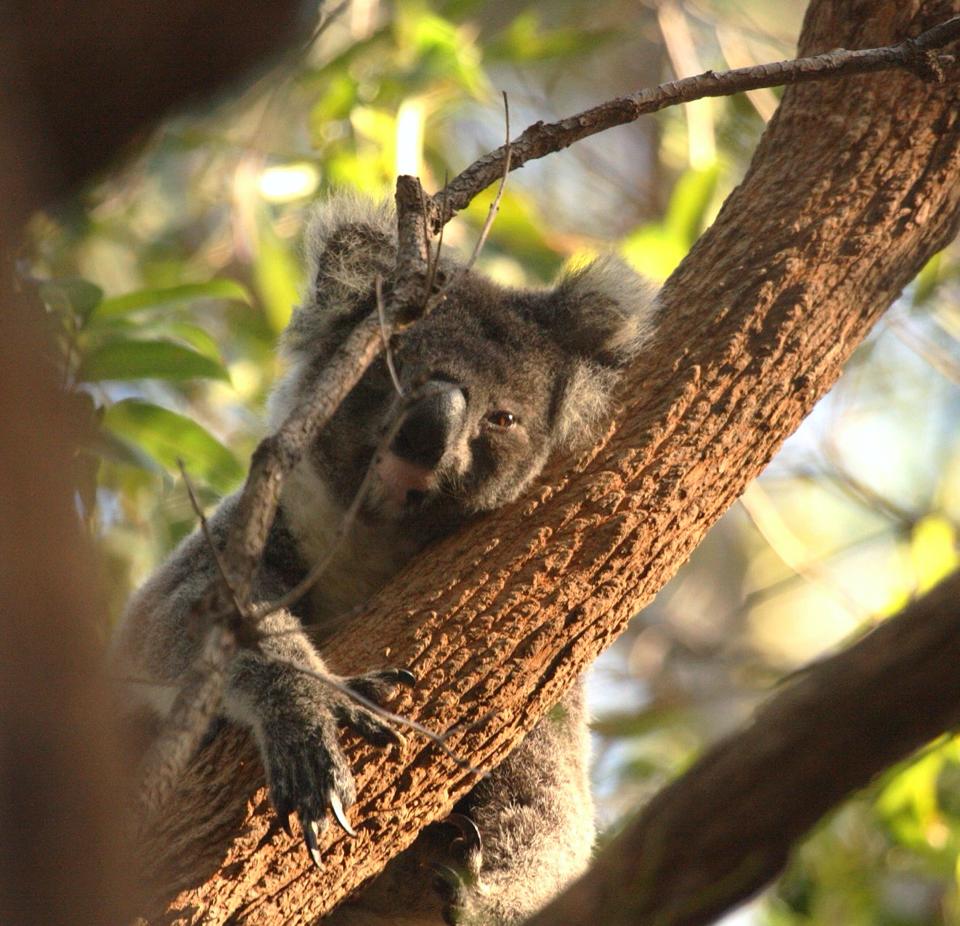 All koalas have been rescued from troubled situations such as dog attack and bush fires so it’s a really great cause to support and one of our treasured Australian experiences.

Getting there: Port MacQuarie is a four hour drive from Sydney and is a great stop on any East Coast Road Trip. It’s best to drive here, but you can get a short flight from Sydney.

Best places to see a koala in the rest of Australia

If you were to ask us what one place you should go to see a wild koala, we’d recommend Kangaroo Island. It’s a place that has a really healthy population and we saw them in multiple places without trying too hard. 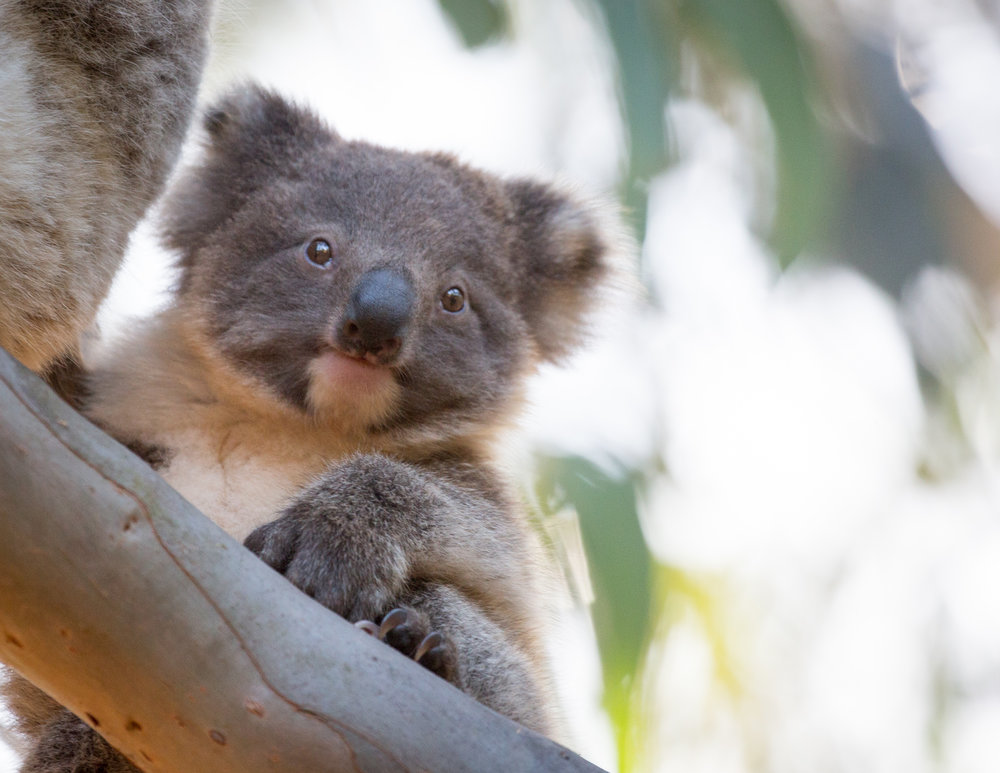 One of the koalas at Hanson Bay, Kangaroo Island

Kangaroo Island is either a short flight from Adelaide or a short ferry trip from Cape Jervis.

A good place to see koalas on Kangaroo Island is along the Heritage Walk, a 1.5km track directly by the visitor’s centre at Flinders Chase National Park.

Whilst walking this trail we saw two adult koalas and one joey in the trees, right along the track.

Just keep looking up in the trees and we’re sure you’ll spot them here. 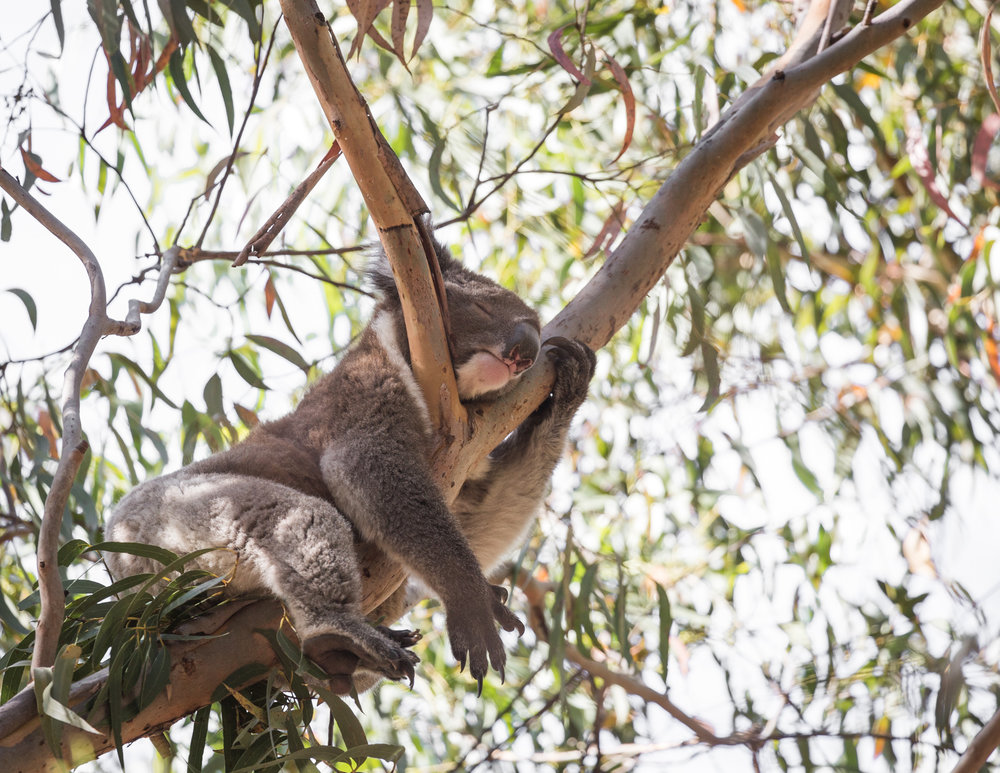 Getting there: Flinders Chase is on the very western part of Kangaroo Island. The Visitor’s Centre is about 1.5 hours away from American River and Kingscote.

If you’d like to see koalas in the wild whilst kayaking, then head to Harriet River.

Whilst paddling along the river we saw two in the trees that arched right above us.

One gave a good old growl as we paddled beneath his tree. 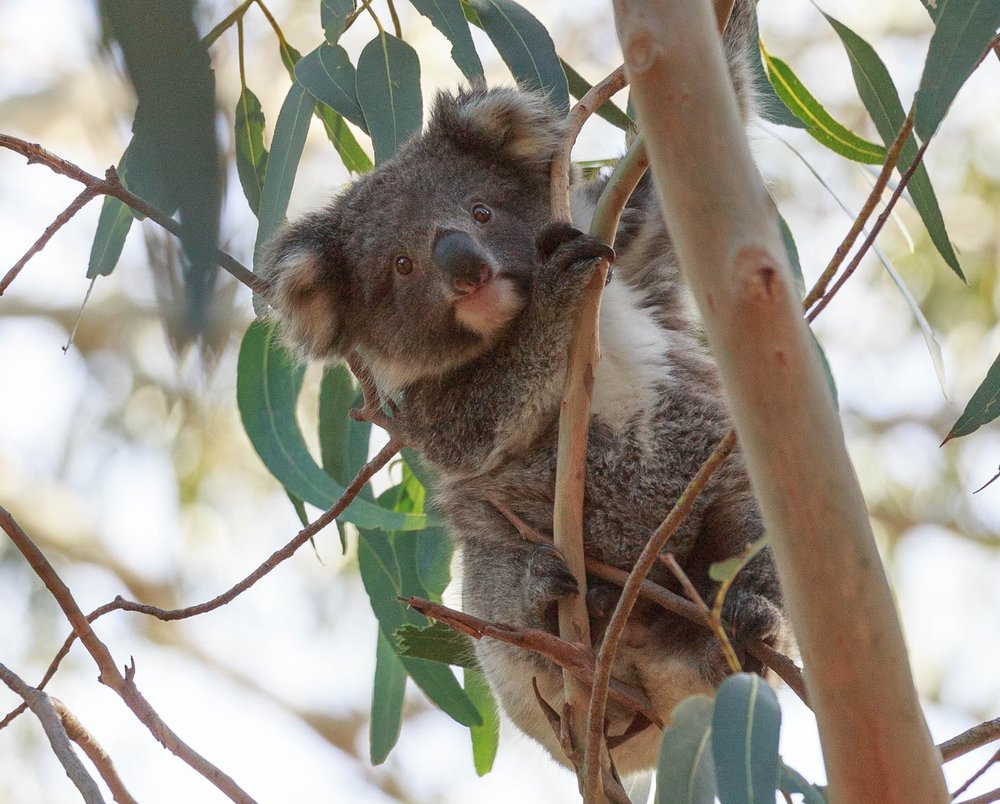 Getting there: You will need to go to Kangaroo Island Outdoor Action to kayak along Harriet River. They’re based by Vivonne Bay which is about one hour away from American River and Kingscote.

Hanson Bay also has a high population of koalas in the area and we heard of some people getting really lucky and seeing them close to the dirt road on the way to the beach. Alternatively, you can go to the sanctuary where a population is being protected.

Every morning spotters put flags below the trees where they are seen. There is a small entrance fee if you aren’t staying at the Hanson Bay cabins. 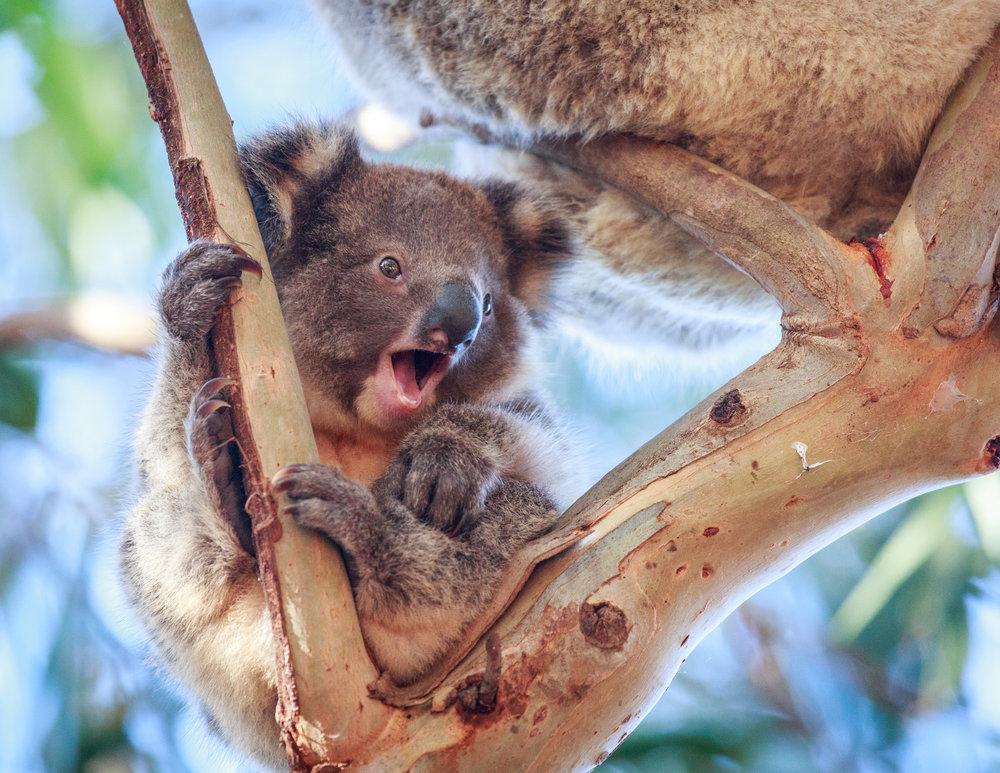 As it’s one of our favourite accommodation we stayed at in Australia we would recommend checking the cabins out.

Getting there: Hanson Bay is an hour away from Kingscote and American River by car.

The Great Ocean Road is a brilliant spot to see wild koalas.

Most people will have luck if spending a few days in the area. One of our friends even saw one crossing the road right in front of their car whilst on this iconic drive! 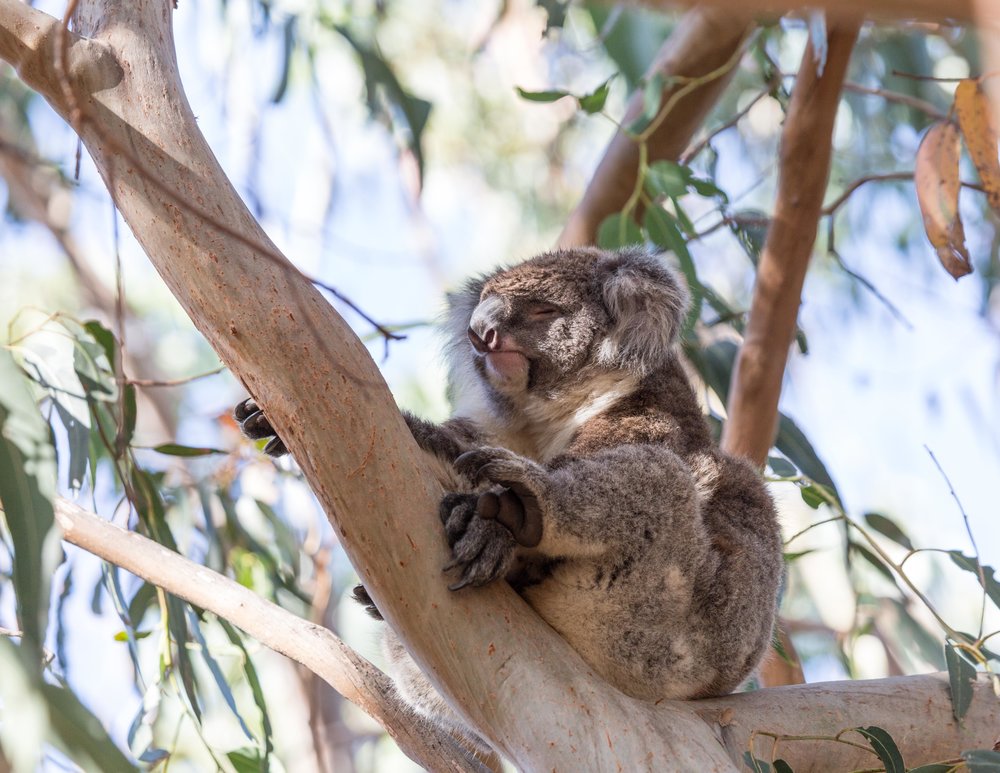 Kennett River is the easiest place to see them, there is a huge population of koalas living in a relatively small area. Head to the koala walk – Grey River Road – which is a road lined with gum trees and should be an easy spotting win.

This tiny little pocket of bushland just an hour west of Melbourne has a small population of koalas. The good news is the best place to see them is along a short (but steep) walking trail to Flinders Peak, which is lined with eucalyptus trees – the koala’s favourite habitat.

This isn’t one of the easiest spots to see koalas on the list but as the trail is just 1.5km long you can concentrate your search in a small area, if you visit early or late in the day you may get lucky! 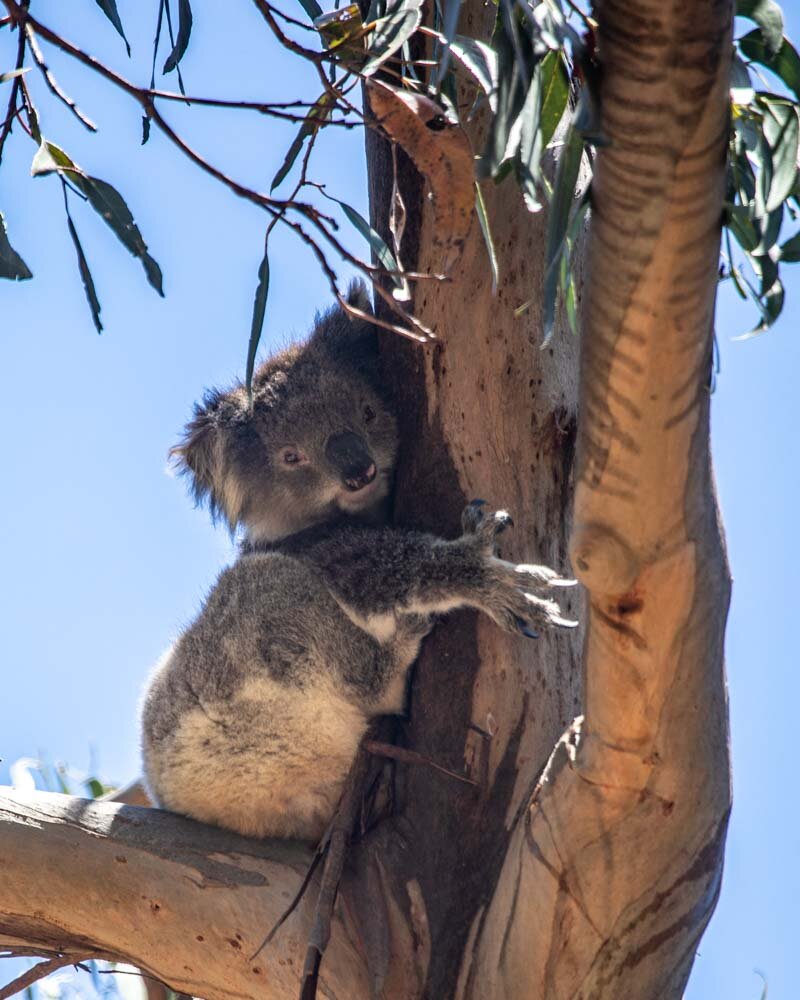 The Otways are a fantastic place to find wild koalas in Victoria and you have lots of options to choose from. A popular place if you are driving the Great Ocean Road and plan on visiting Cape Otway is Lighthouse Road. They are quite easy to spot along the tree lined road particularly if you are able to visit when they are more active in the early morning or towards sunset. 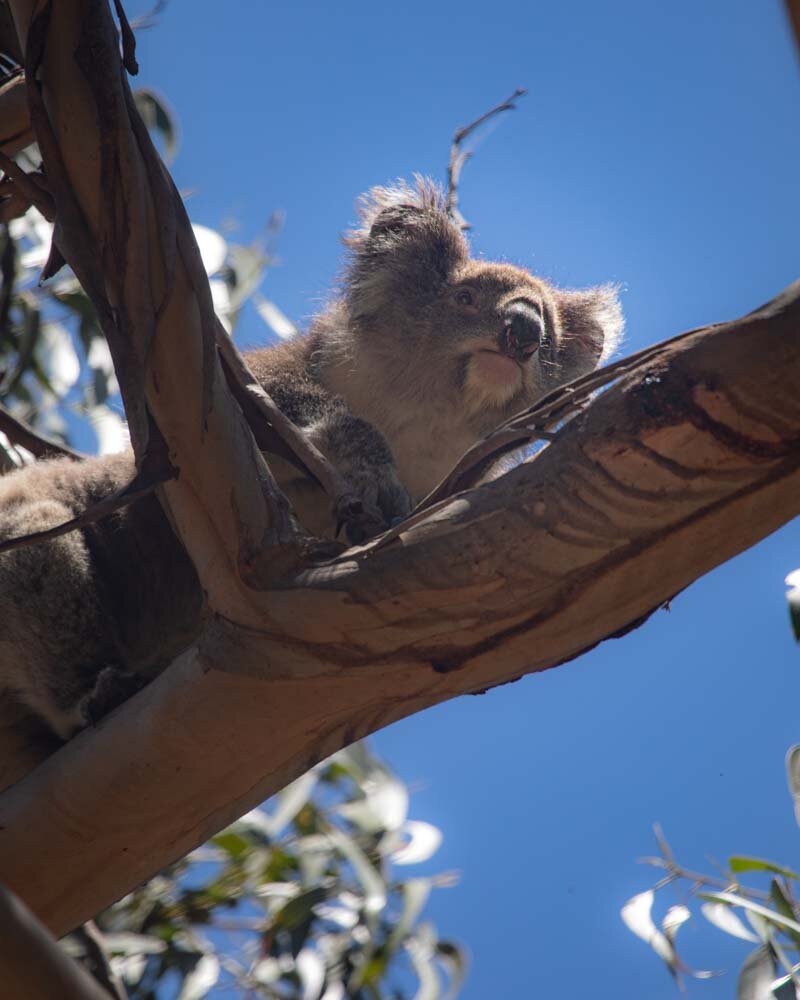 Our personal favourite spot in the Otways is Lake Elizabeth. As well as the chance to spot koalas you might also see a rare platypus in the lake. We were lucky enough to see both species at dusk and the koalas here were more vocal than any we’ve seen outside of Kangaroo Island.

To get to Lake Elizabeth requires a 1km walk (each way) which has one steep section but it’s a lovely stroll through the bush and well worth the effort.

How to spot koalas

What to look for

Koalas can be tricky to find as they tend to be curled up high in gum trees that match the colour of their fur. The best way to see one is to look for an unusually round object high up in a tree, usually close to where a branch comes off the trunk. Another trick is to look for koala poo on the ground!

Koalas are most active at dawn and dusk. This doesn’t mean you’ll see them running around, but it’s the time they’re most likely to move.

Due to their low-energy diet, koalas spent most of the time asleep, especially in the heat of the day. If you can, try to go as close to sunrise or sunset as possible to spot them.

10 Interesting Facts About Australia You May Not Know

How Do Koalas Drink? Scientists Find It’s Not What We Think