For a relatively small, landlocked country, Switzerland contains an exceptional amount of natural beauty and cultural diversity—with four official languages and all the variety they represent. These 10 towns spread across the country demonstrate the best Switzerland has to offer in terms of spectacular mountain scenery, flower-lined nature paths, lakefront beauty, and picturesque historic centers. 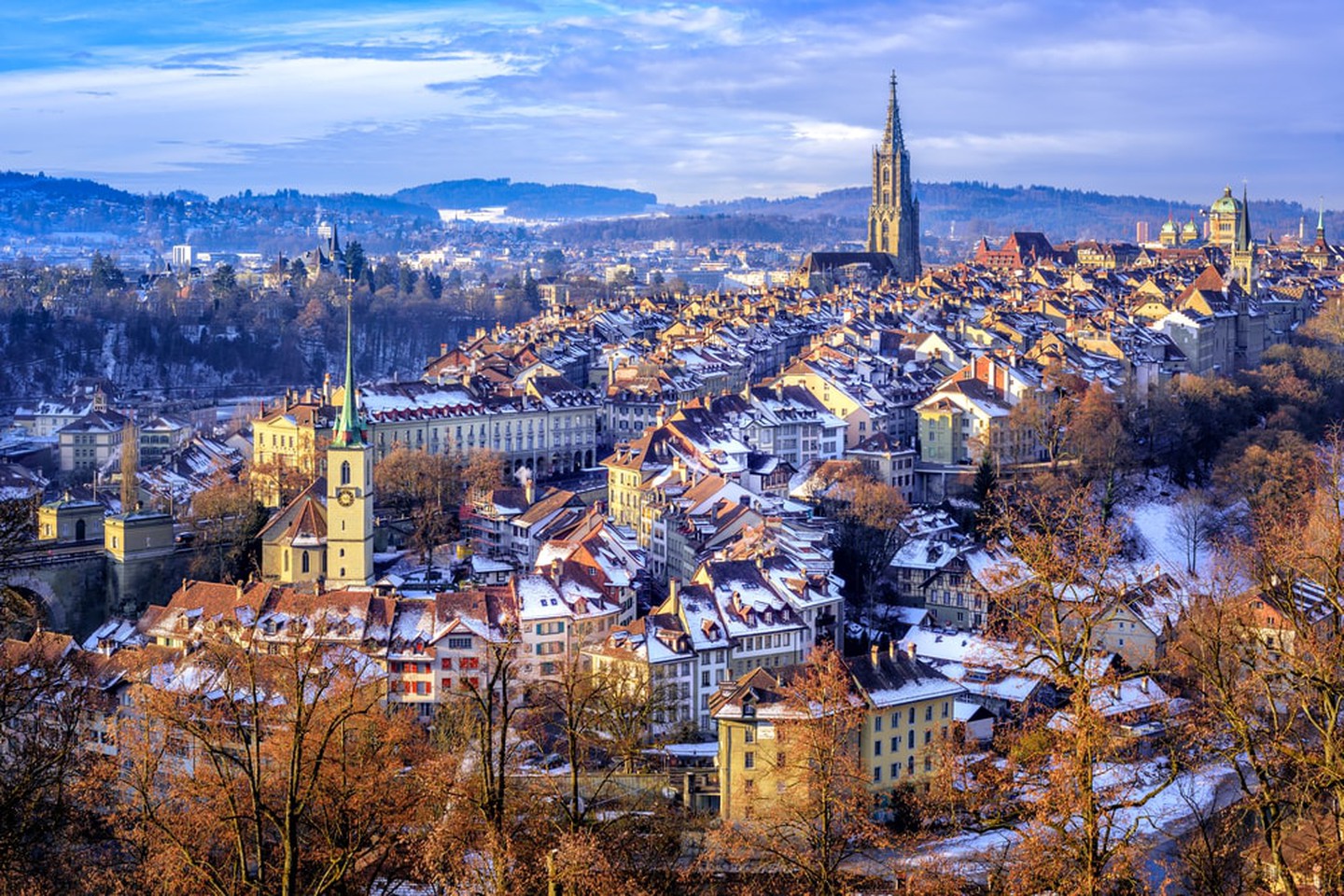 Framed by the Aare river, the Swiss capital of Bern lies in the west-central part of the country. Its charming Old City is a UNESCO World Cultural Heritage Site, and is known for its medieval arcades and many 16th-century fountains that feature painted figures, including the curious “Child Eater Fountain” (Kindlifresserbrunnen). Bern boasts one of the world’s biggest collections of the artist Paul Klee, housed in the Zentrum Paul Klee—designed by renowned Italian architect Renzo Piano. 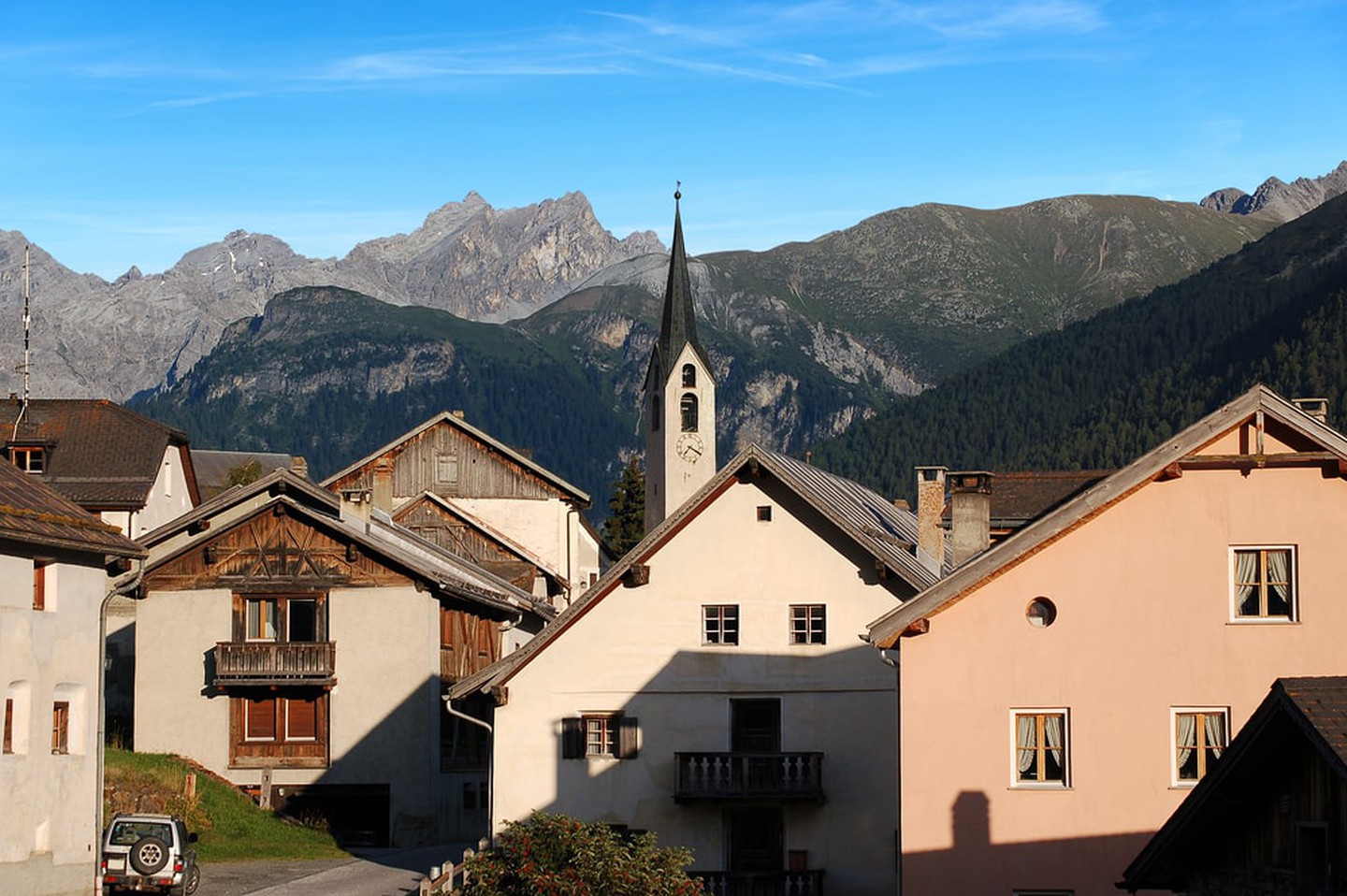 Set 1,650 meters above sea level in the Lower Engadine mountains of the Graubünden canton, Guarda is a tiny remote village whose beautifully painted 17th-century houses have been carefully renovated, earning it the Wakker Prize for preservation of its architectural heritage. The setting of the famous children’s book Schellen-Ursli (1945) by Selina Chönz and Alois Carigiet, Guarda has also preserved traditional customs like the Chalandamarz event in March. The majority of the town’s population still speak Romansch—Switzerland’s fourth official language after German, French, and Italian. 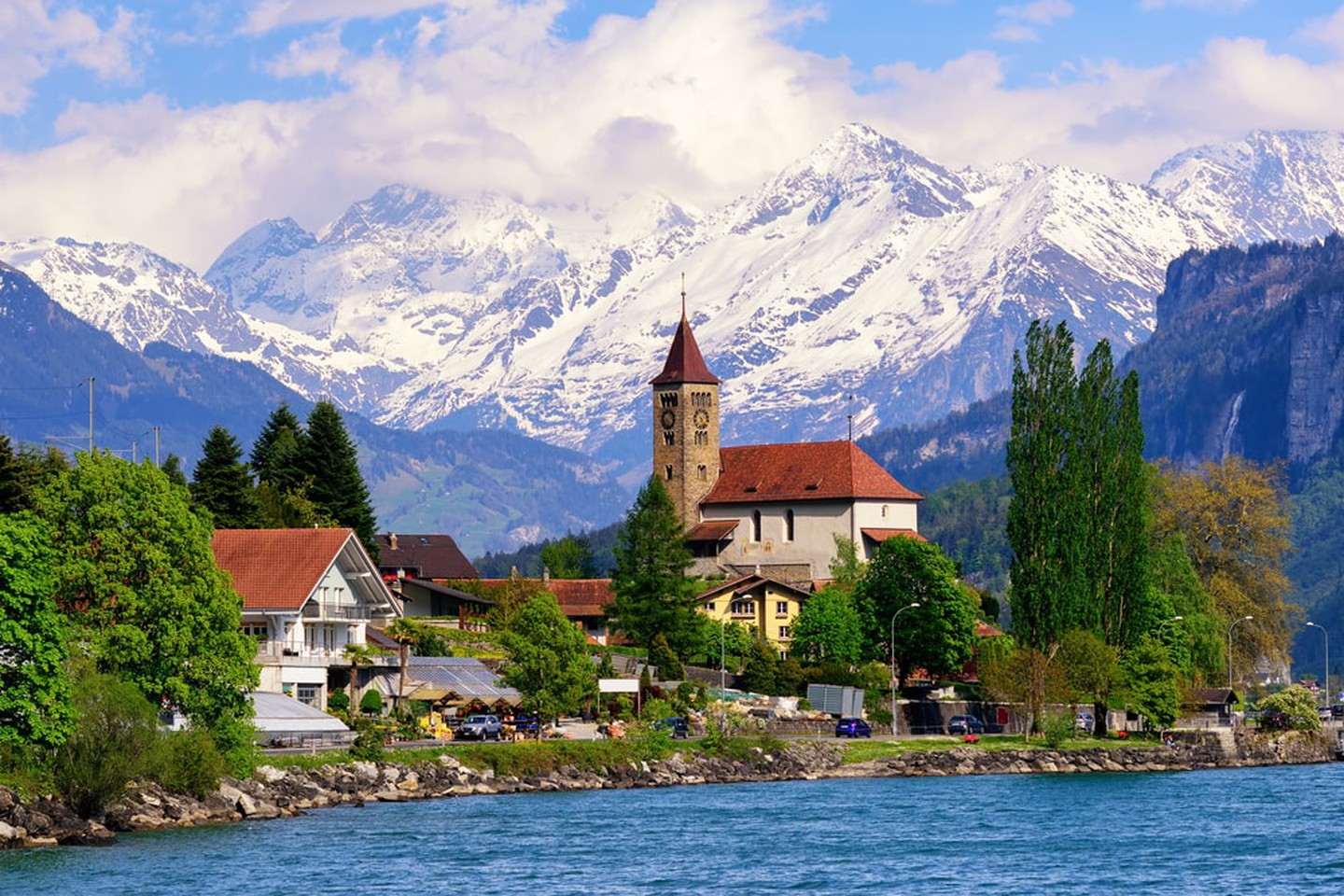 As its name suggests, Interlaken is positioned between two lakes—Lake Thun and Lake Brienz—and surrounded by some of Switzerland’s tallest peaks, thus making it a place for stunning views in every direction. It is also the perfect base from which to enjoy the natural splendors of the country, either lakeside or in the many hiking paths that begin at Harder Kulm, a panoramic viewpoint at 1,322 meters that is accessible by funicular. Since Interlaken lies in the heart of the Bernese Oberland, the big peaks of the region—Eiger, Mönch, and Jungfrau—are also accessible for a closer look via the trains of the Alpine railways. 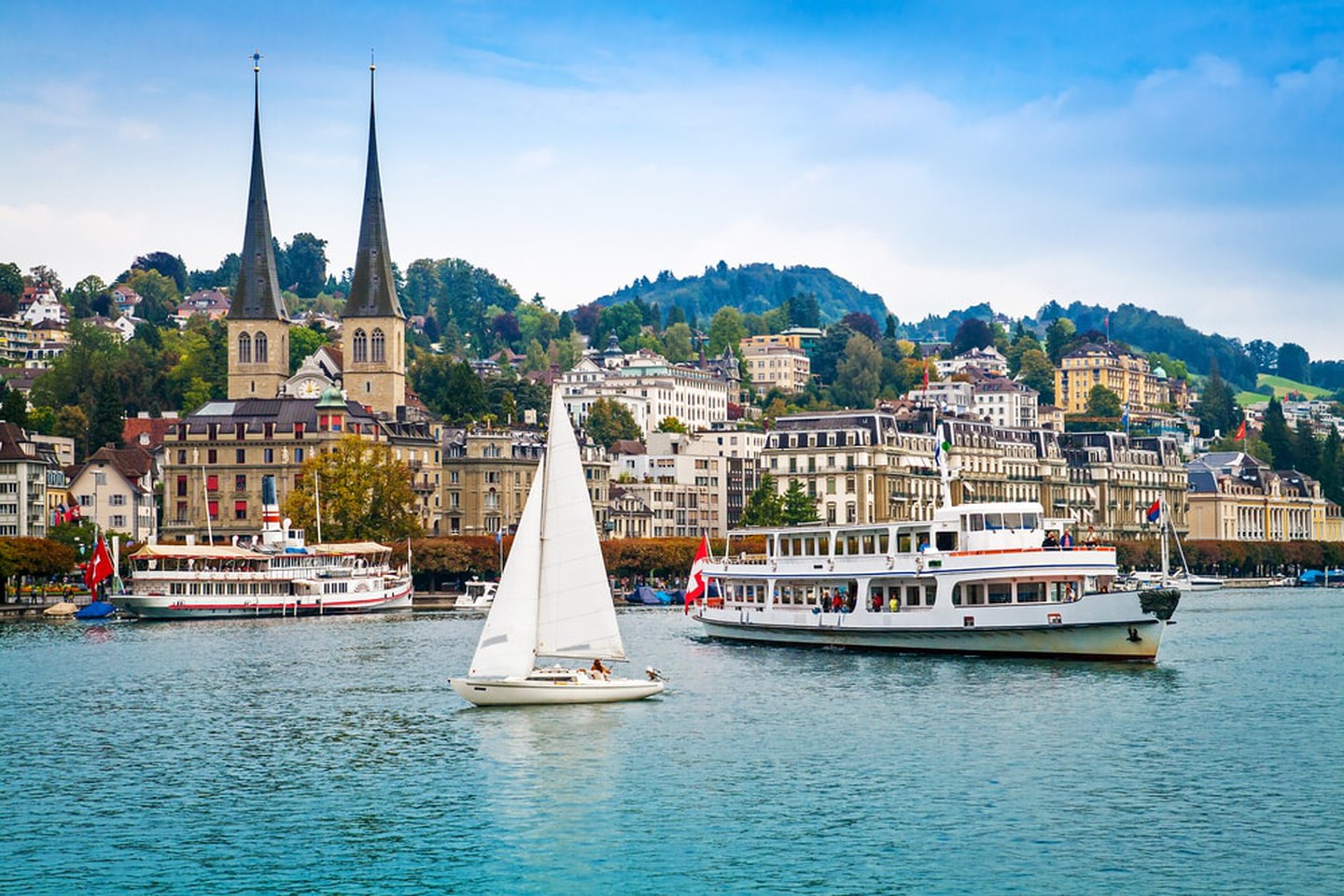 Located in central Switzerland, Lucerne is a picturesque ancient city on Lake Lucerne best enjoyed on foot, where you can stroll along prettily painted historic houses such as those in the central Weinmarkt Square. There are also a number of notable medieval landmarks like the Chapel Bridge (Kapellbrücke), one of Europe’s oldest covered bridges, or Musegg Wall, an intact part of the city’s rampart walls built in 1386. Yet, the city does also have a modern side, exemplified by the architecturally impressive KKL (Culture and Convention Center) designed by French architect Jean Nouvel, and breathtaking Alpine terrain remains easily accessible by cableways up to the Pilatus, Rigi, or Stanserhorn mountains. 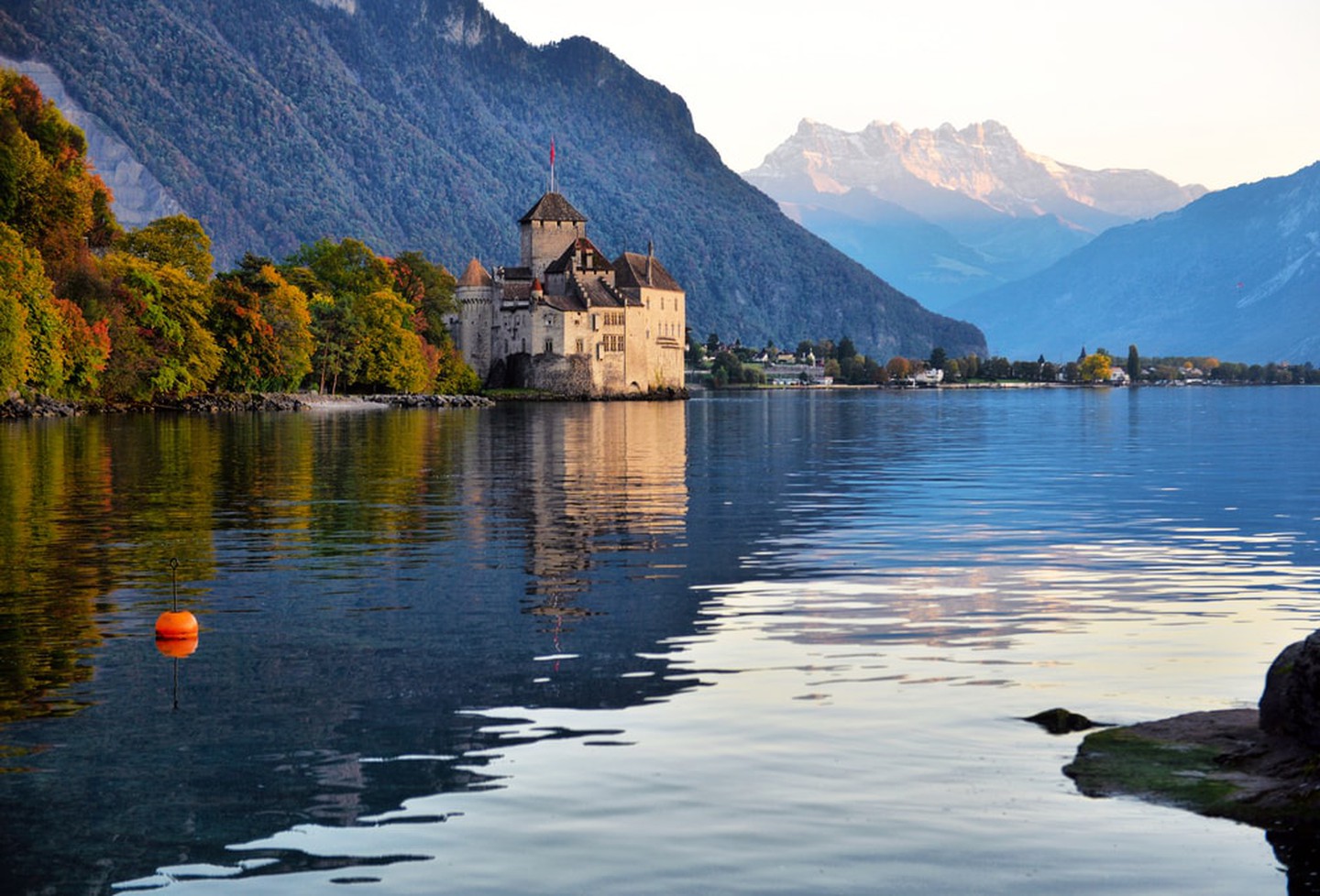 Montreux is a lovely resort situated on a long expanse of Lake Geneva in the French-speaking south-west part of the country. The quays of Montreux offer miles of lakeside strolling, surrounded by exotic flowers and trees and framed by beautiful views of the Alps in the background. The town also boasts a 13th-century castle—Château de Chillon—that looks out onto the lake. The castle, which was originally built by the House of Savoy, has inspired literary works by Jean-Jacques Rousseau and Lord Byron. The cultural events are equally impressive, as the town hosts the Montreux Jazz Festival in early July—the second largest annual jazz festival in the world. 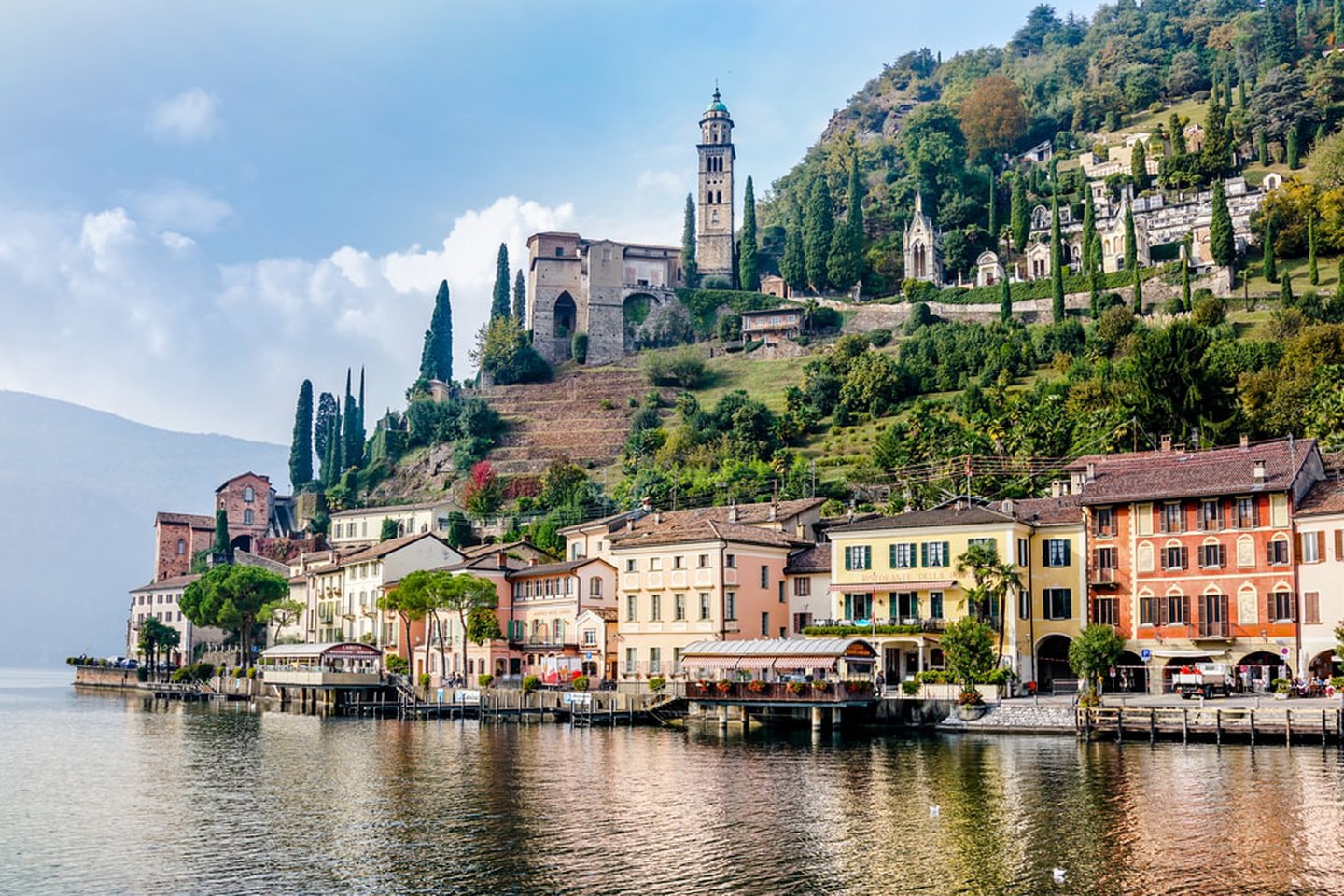 A ferry trip away from Lugano, Morcote is the prettiest village along Lake Lugano’s shoreline. The tiny former fishing village is set into a hillside that offers charming alleys to explore as well as lovely vistas of the lake, with the bell tower of its historic Santa Maria del Sasso Church towering over the houses below. The ambience reflects its location in the Italian-speaking canton of Ticino, and its Parco Scherrer offers an exotic assortment of Mediterranean and Asian flora and architectural touches like Greek sculptures, an Egyptian temple, and even a Siamese tea house, not to mention panoramic views. 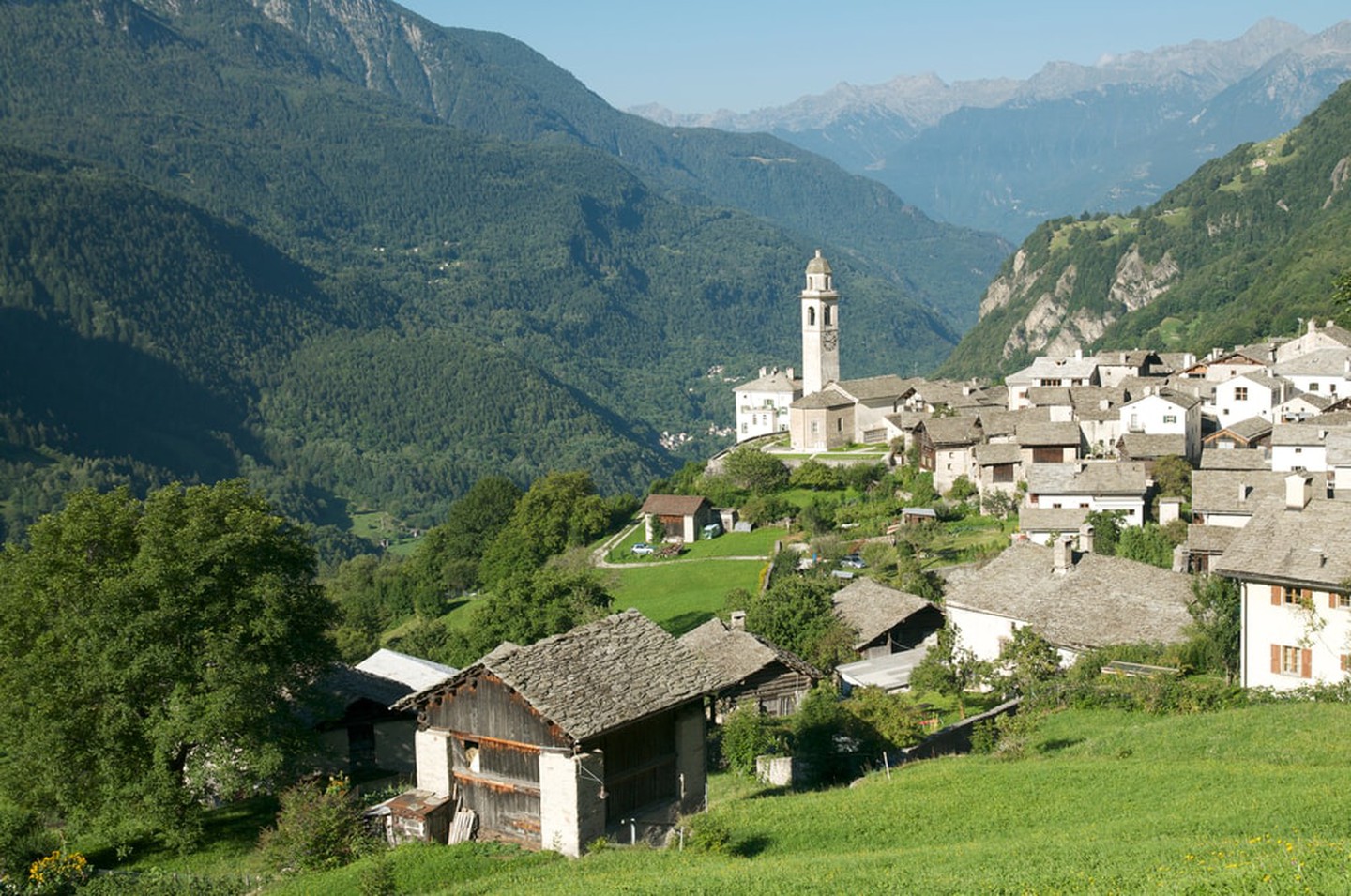 Located in the southern canton of Graubünden, where German, Romansh, and Italian are all spoken, Soglio is a beautiful little village tucked up in the mountains. It features charming cobblestone streets and the landmark Church of St. Lorenzo looming over the village, while its historic hotel, Palazzo Salis, exudes a true Mediterranean feel with its magnificent rose garden and towering sequoia trees. The village’s highlight is the Via Panoramica, a path that travels through a romantic landscape of vibrant wildflowers for which the area is known. 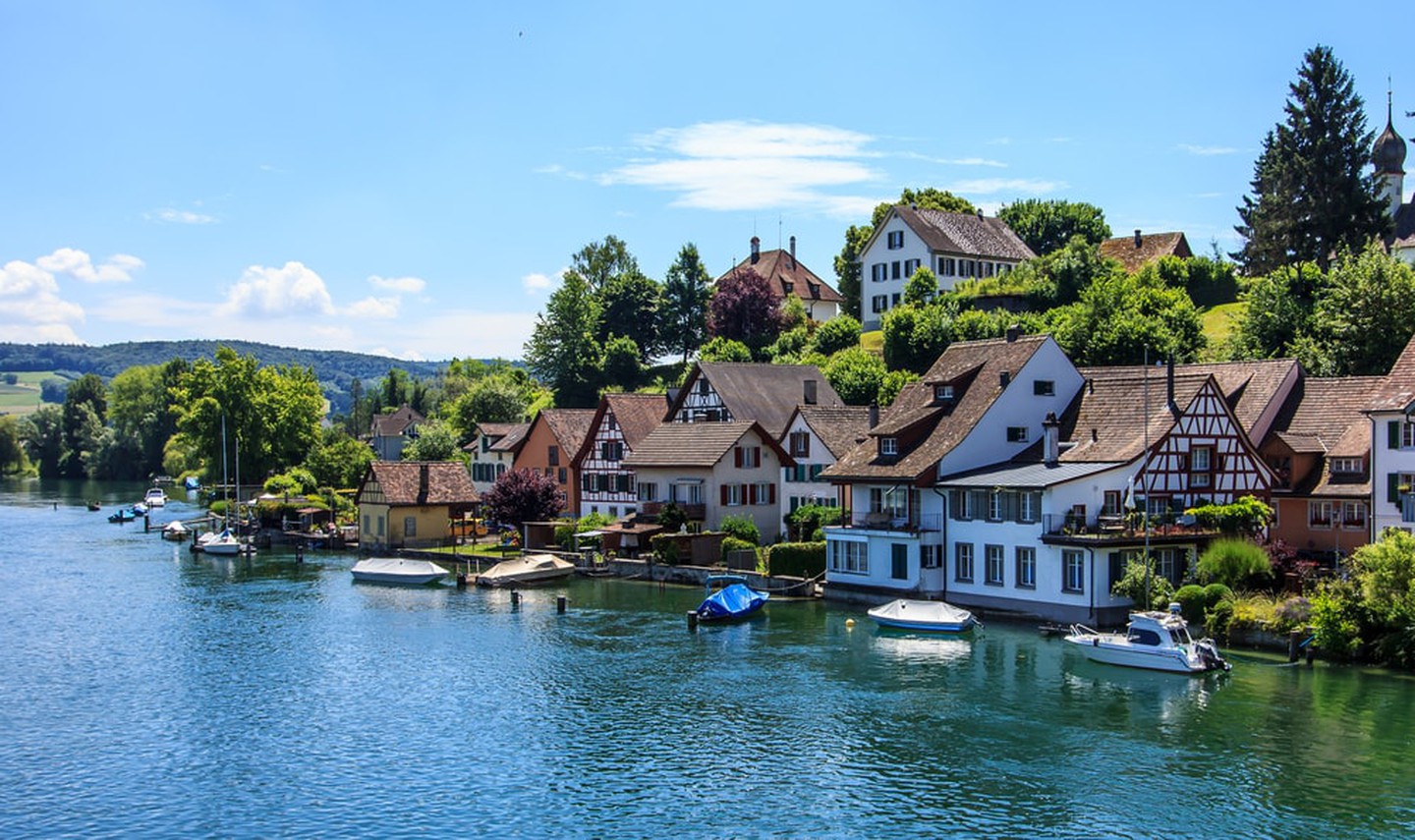 Just what one imagines when conjuring an idea of the perfectly quaint Swiss village, Stein am Rhein’s pedestrian center is a dense collection of well-preserved medieval structures, many of them with exquisitely painted colorful facades. Nicknamed the “Jewel on the Untersee,” situated at the point where Lake Constance becomes the Rhine river in the eastern canton of Schaffhausen, Stein am Rhein boasts a medieval hilltop castle (Hohenklingen Castle) with a bird’s-eye view of the walled town below and a former Benedictine abbey (St. George) founded in the 11th century. 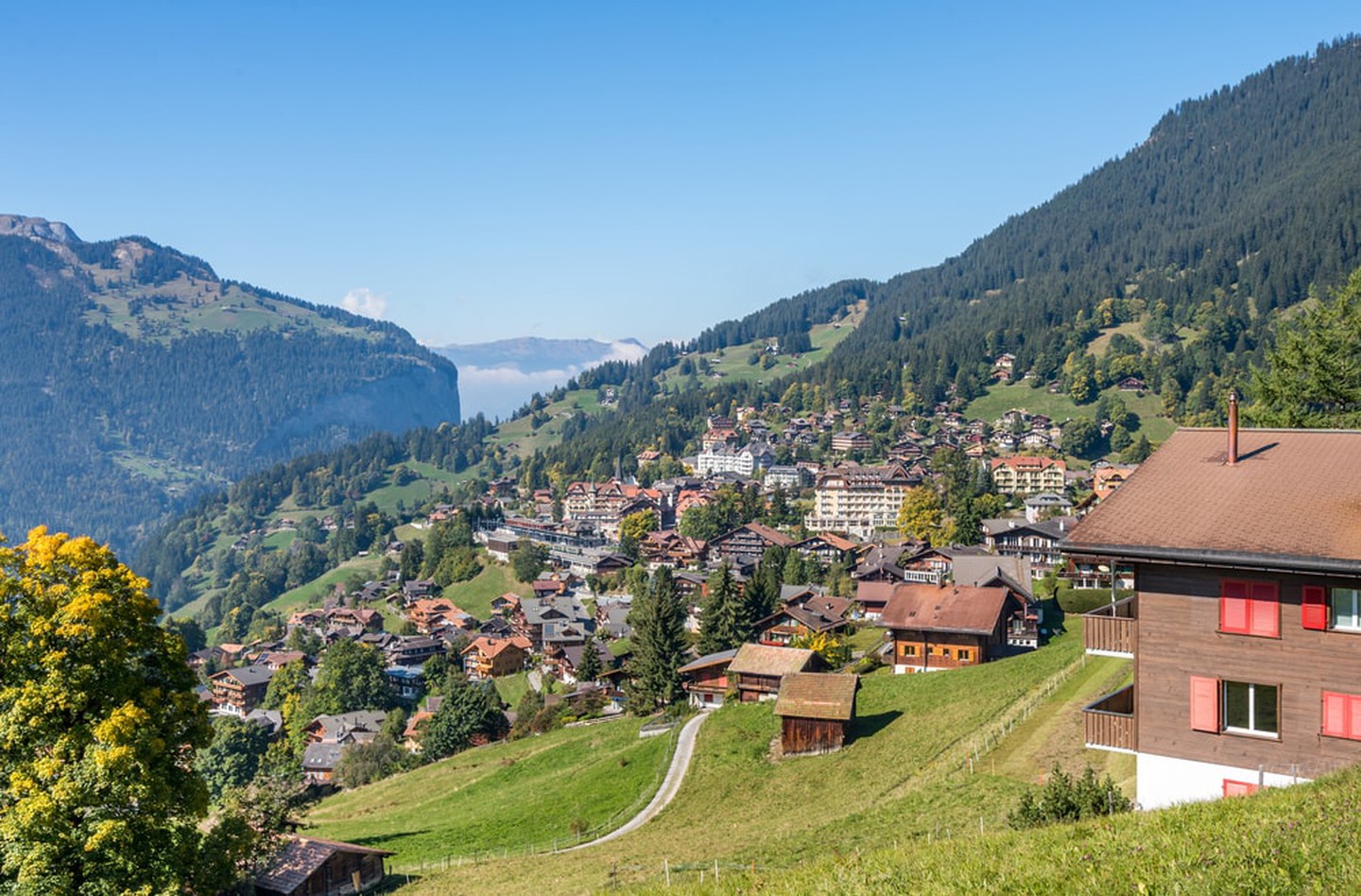 A postcard-perfect mountain village accessible only by train, Wengen is situated on a protected sunny terrace near some of the tallest peaks in the country. The village itself is home to a number of timber houses, chalets, and belle-époque hotels, making for an idyllic base from which to explore the surrounding mountains. Visitors can venture out along one of the many walking trails or take one of the cableways leading to panoramic viewpoints. For the more adventurous, thrilling sports like paragliding and river rafting can also be sought out. 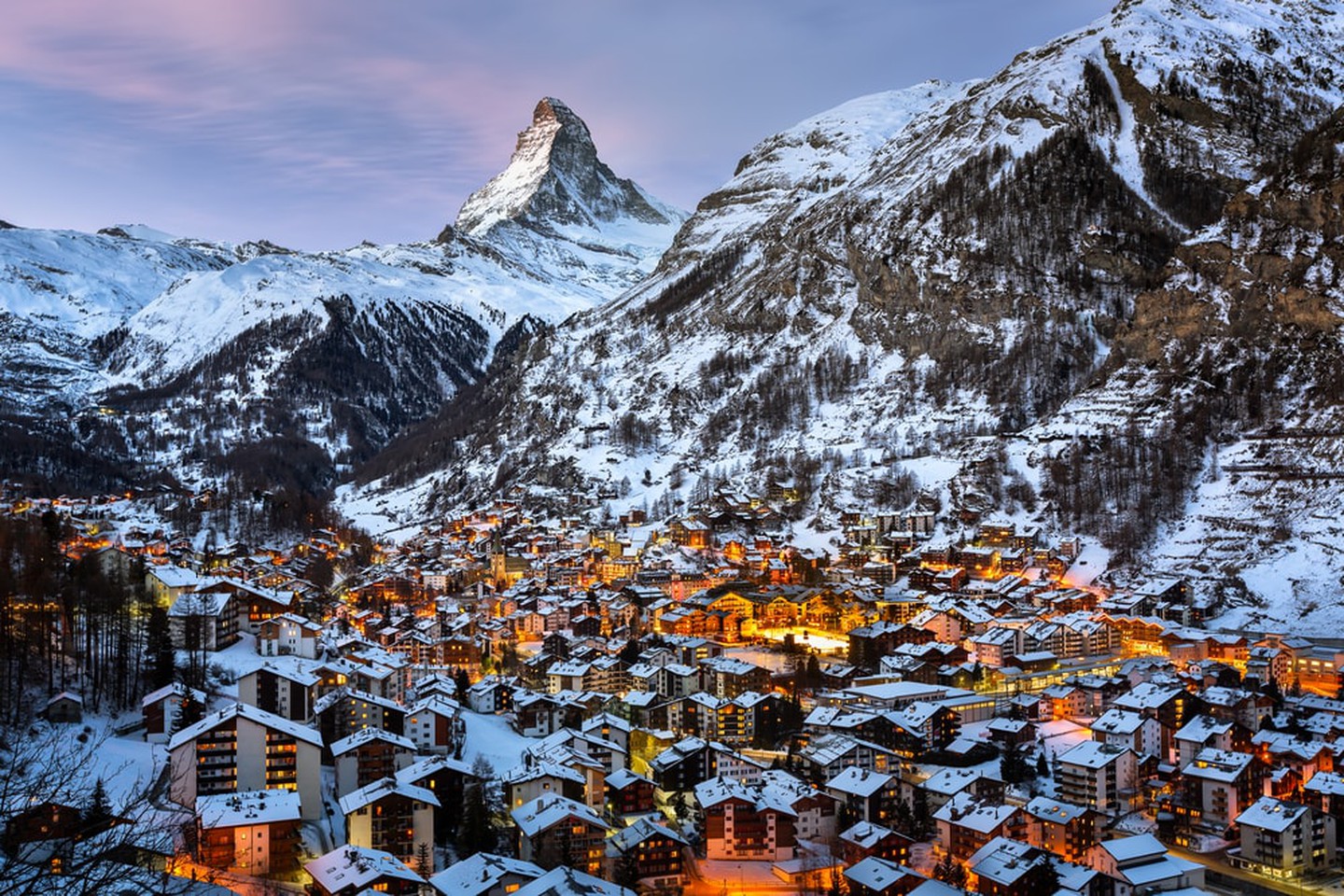 The car-free resort town of Zermatt is the highest in Europe, guaranteeing a long ski season, including year-round skiing on Zermatt’s glacier. The town lies at the base of the famous Matterhorn, where lifts ascend 3,883 meters to reveal expansive Alpine views. In addition to a charming town center, Zermatt is also quite the hot culinary destination, with two restaurants being awarded Michelin stars in 2015—Ristorante Capri in the Mont Cervin Palace, run by chef Salvatore Elefante, and chef Ivo Adam’s After Seven at the Backstage Hotel. In 2015, the Matterhorn celebrated the 150-year anniversary of the first ascent to the summit in 1865, with the town hosting a number of special events.

11 Things To Do In Genava, Switzerland

9 Best Things To Do In Thun, Switzerland