Choosing the most beautiful churches in Portugal is a daunting task, since religious culture has been part of Portugal for hundreds of years. But we made the effort and selected the Portuguese churches that stand out for their beauty, their architecture and their originality.

Judging by beauty, architectural value or originality, we picked 10 out of the myriad churches from different parts of Portugal. Read on for our list of top 10 most beautiful churches in Portugal. 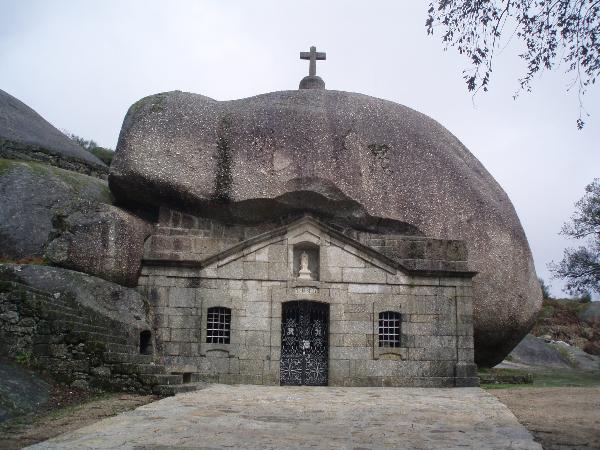 The Chapel of Nossa Senhora da Lapa [Our Lady of the Cave], built in the 60s of the past century, is located near the Gerês, on the Penamourinho hill, in the Soutelo parish. It stands out for the fact that it was built inside a cave on a large hill and used to be one of the most important shrines in Europe.

Legend has it that the Virgin Mary appeared to a young shepherd girl. The devotion led to pilgrimages that motivated the construction of the small chapel. 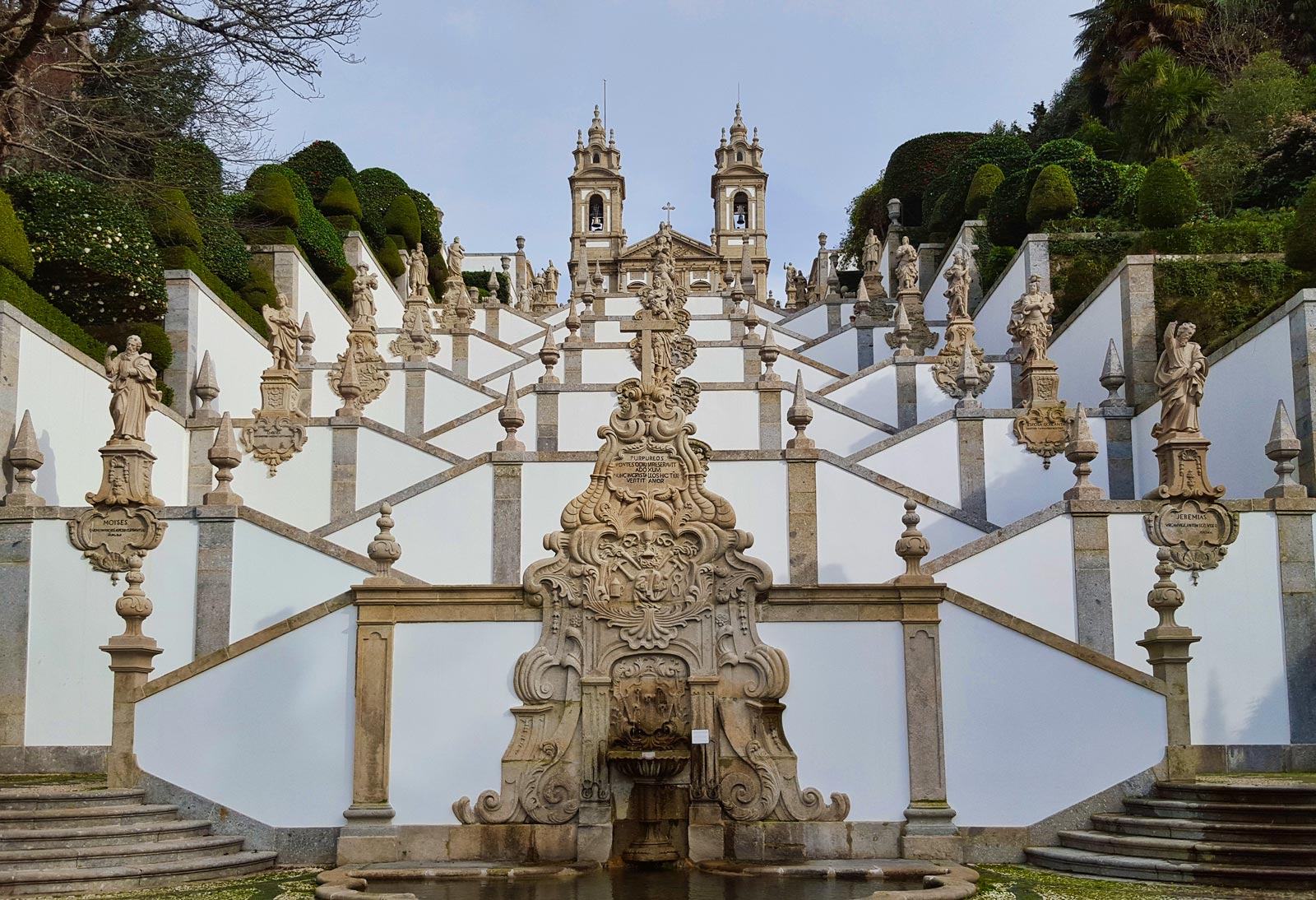 This National Monument and UNESCO World Heritage Site in Braga stands apart from other churches in Portugal due to its extraordinary surroundings and building.

The Bom Jesus do Monte is a Catholic Shrine and architectural-landscape setting that includes a church, a large stairway that serves as a Way of the Cross, and even a forest. The site inspired the construction of the Nossa Senhora dos Remédios Shrine in Lamego. 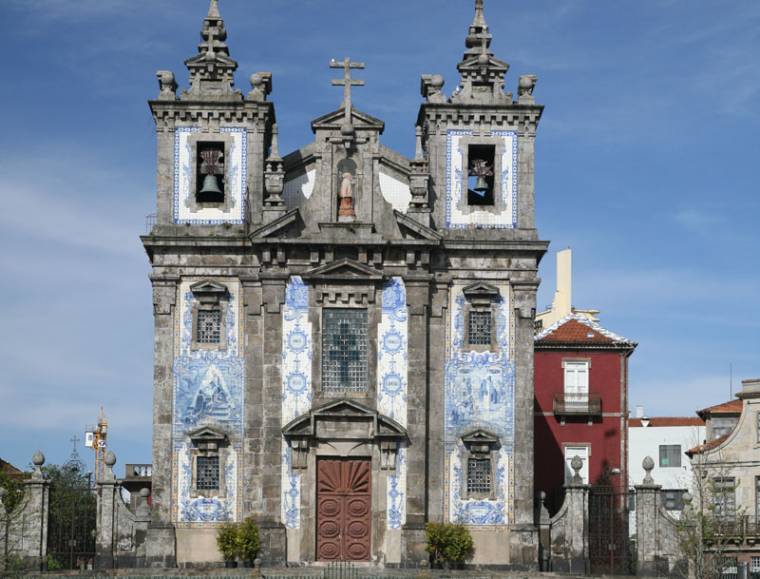 The Church of Saint Ildefonsus, or Santo Ildefonso, in Porto, is an example of the artistic mastery that dominates the majority of Portugal’s churches. Rebuilt in the first half of the XVIII Century, the façade is composed of two bell-towers with cornices and its walls are coated in tiles painted by Jorge Colaço, illustrating scenes from the life of Saint Ildefonsus.

Highlights include the rococo altarpiece in baroque gold-plate and the neo-classical side altars. Just 12 kilometres outside of Porto, on the Miramar beach in Gulpilhares, you’ll find the unique Senhor da Pedra Chapel [Lord of the Rock], that on misty mornings seems to float above the sand.

Raised in 1686 on a rock right by the ocean, its origins lie in a pagan cult that existed among the pre-Christian people who worshiped their Gods in the nature.

The temple would later be converted to Christianity, maintaining the charm of its location and giving rise to one of the most traditional pilgrimages in Vila Nova de Gaia, that takes place every year on the Sunday Feast of the Holy Trinity.

Academics believe that this church dates back at least to the mid XII Century. It is renowned for its magnificent blue and white tiles representing St. Peter, St. Paul, Saint John Bosco, Saint Francis of Assisi, the Sacred Heart of Jesus and the Heart of Mary that line the architecturally rich and decorated building. The church’s façade is considered one of the most impressive in Portugal. Also known as the Santa Maria da Vitória Monastery, it was built in 1386 by D. João I, Master of Avis, in gratitude to Our Lady for the victory over the Castilians in the Battle of Aljubarrota.

It belonged to the Order of Saint Dominic and was only finished in 1563, representing a magnificent example of Gothic architecture in Portugal, having been classified as Unesco World Heritage and chosen as one of the Seven Wonders of Portugal in 2007.

The São Domingos Church, located near the Rossio, in Lisbon, stands out for its baroque and mannerist style. It was also made famous by the Royal Weddings which took place there, as well as the catastrophes that occurred.

Built in the XVIII Century, it survived the 1755 earthquake but was heavily damaged in a massive fire in 1954 that destroyed not only a large part of its structure, but also the gold-plate decorations and several paintings.

Following the fire, it was not fully restored, which leaves a lasting impression on visitors. It was later classified as a national monument. The inside is rich and varied, with large columns and decorated with marble and tiles. 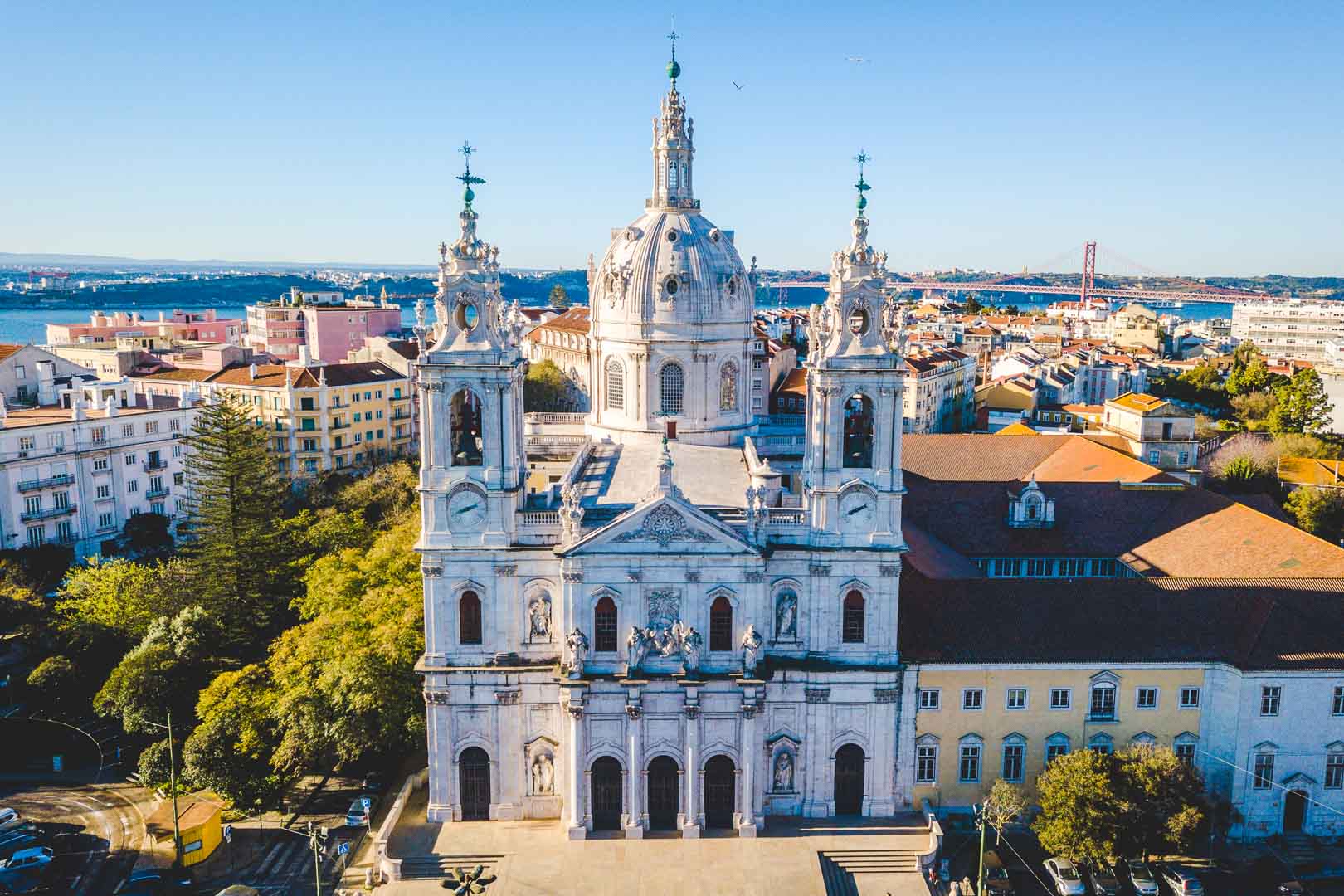 This old Catholic place of worship used to be a Carmelite convent and was built in the second half of the XVIII Century, following a promise by Queen Mary I and D. Pedro III over the birth of a son. It was the first church in the world to be dedicated to the Sacred Heart of Jesus and the Queen herself is buried there.

It stands out for its end of the baroque period and neoclassic styles, the dome and the Machado de Castro statuary in the façade. The use of marble on the inside is impressive, as are the tones of grey, pink and yellow that shine in the sunlight that comes in through the dome.

The extraordinary Machado de Castro nativity scene, composed of over 500 cork and terracotta figures, only comparable to museum pieces, is another reference in this church which stands apart from most Portuguese churches for a variety of reasons.

Also known by the name Santa Maria de Belém Monastery, this national symbol was built in the XVI and has been a UNESCO world heritage site since 1983. In 2007 it was selected as one of the seven wonders of Portugal.

It represents the height of Manueline architecture and is undoubtedly the most notable monastic building of its age in Portugal, considered one of the main salon-churches in Europe.

Highlights include the south and west facing entrances that should be seen as a diptych, sculpted in honour, and to the glory of, King D. Manuel I.

Built on the orders of Rodrigo Afonso de Melo, the first Count of Olivença, in 1485, the Loios Church belonged to the XV Century monastery of the same name that sits on the site of a medieval castle.

The church was elevated to the rank of national monument in 1910 and is renowned for its white marble slabs on which were engraved the figures of its founders. Also noteworthy is the tomb of Francisco de Melo, a renaissance work by Nicolau de Chanterene. Founded in 1879 by mathematician and engineer Miguel Vieira Ferreira, the Brazilian Evangelical Church was immediately recognised by the Imperial Government and attracted members of the upper classes of Rio de Janeiro.

Based on faith in direct revelations of God and the inspiration of the Holy Spirit, it naturally made its way to Portugal over the years.