With rolling green countryside and plenty of natural wonders, Ireland is a walker’s paradise. Even though it is better known for its hills, the Emerald Isle does have more challenges peaks to tempt serious mountaineers.

When it comes to the highest peaks in Ireland, the MacGillycuddy’s Reeks range in Co. Kerry tops them all. All in all, Co. Kerry is home to five of the top ten highest mountains in Ireland, but you can find tall peaks across the Republic and Northern Ireland, so lace up your walking shoes and be ready to start walking as soon as the sun comes out.

Just keep in mind: most hillwalking and mountain climbing in Ireland is done at your own risk, and there are not usually any rangers on the lookout. Be sure to pack enough supplies, and let someone know where you are headed and when you expect to be back.

Ready to walk? Here are the 10 highest mountains in Ireland and the best routes to take to hike to the summit. The star of the MacGillycuddy’s Reeks, Carrauntoohil is the highest peak in the highest mountain range in Ireland – making it the tallest mountain in Ireland. Also sometimes known as Corrán Tuathail, the mountain soars to 3,407 feet (1,038 meters). Found in County Kerry, Carrauntoohil is made of sandstone and has steep ridges that can be difficult for all but the most experienced hikers. However, those who make it to the summit using the trail known as the ​”Devil’s Ladder” will find amazing vistas across the range and a large metal cross that stands on the highest point. Coming in at 3,241 feet (988 meters), Knocknapeasta is the 4th highest peak in the MacGillycuddy’s Reeks in Co. Kerry. The peaks of Benkeragh and Caher both top out a bit higher, but the technical definition of a mountain, which requires a 330-foot (100 m) change in elevation from neighboring mountains, means that these higher peaks technically aren’t counted in the top 10 highest Irish mountains because they are simply too close (and too close in size) to Carrauntoohil. The mountain’s name in Irish is Cnoc na Péiste, which means “hill of the serpent.” The best way to tackle the summit is by taking the Hag’s Glen route, starting from the Cronin’s Yard parking lot. Also found in Co Kerry, at 3,123 feet tall (952 meters) Brandon is the highest mountain in Ireland outside of the MacGillycuddy’s Reeks. Located on the stunningly beautiful Dingle Peninsula, the mountain is named for Saint Brendan, who supposedly visited the area in the 5th century. It’s association with the saint and its dreamy location in the far west of Ireland overlooking the horizon has meant that Mount Brandon has been a part of a pilgrimage route for hundreds of years. A popular 5.5-mile route to take known as the Pilgrim’s Path starts just outside the village of Cloghane and goes up to the summit along a well-marked trail on the east side of the mountain. However, the easiest way to the summit is to take the so-called “Saint’s Route” from Ballybrack in the west. Found in Wicklow Mountain’s National Park, Lugnaquilla is the tallest Irish mountain outside of Co. Kerry. The Co. Wicklow peak rises to 3,035 feet (925 meters) and is the highest mountain in Leinster. The quickest route to the top starts at Fenton’s Pub in the pretty Glen of Imaal. The trail is usually known as the “Tourist Route” but it requires walking along a military access road and pass along an artillery range so use caution and common sense. The shorter hike is about 8 miles roundtrip, but another option is the 9-mile “Glenmalure Loop” which goes to the top of the mountain via Fraughan Rock Glen. Measuring in at 3,012 feet (918 meters), Galtymore on the border of Counties Limerick and Tipperary is the fifth highest mountain in Ireland. Galtymore is the highest peak in the Galty (sometimes spelled “Galtee”) range, which stretches almost 20 miles from east to west. The grass-covered sandstone mountains make for lovely hill walking in Munster. The most common path to the summit is known as the Black Road Route and first summits neighboring Galtybeg (2,621 feet) before continuing to Galtymore. The round trip hike is about 5.5 miles in total.

Head back down to County Kerry to the eastern edge of the Dingle Peninsula to climb Baurtregaum, the sixth highest mountain in Ireland. Baurtregaum comes from the Irish Barr Trí gCom, which means “top of the three hollows,” which probably refers to the three pretty valleys which are carved into the side of the mountain. The 2,792 foot (851 meters) mountain is the highest peak in the Slieve Mish Mountains, and the most popular but most challenging walk takes in Baurtegaum and neighboring Caherconree in the same 7-8 hour loop. The Curraheen Derrymore Loop starts a short distance outside of Tralee. The seventh highest mountain on the Emerald Isle is found in Northern Ireland. Slieve Donard is Ulster’s tallest peak and stretches to 2,790 feet (850 meters). Part of the Mourne Mountain, it sits on the north-eastern edge of the range, overlooking the Irish Sea outside of the town of Newcastle in Co. Down. The mountain is named for Saint Donard, a follower of St. Patrick, who is said to have sought solitude on the peak to study and pray. These days, the mountain is best known for the Mourne Wall and the ancient burial tombs you can find near the summit. Starting from Donard Park, the most popular trail goes along the Glen River. It is about 5.5 miles round trip, and while it does get steep in some places, it is well marked and pretty suitable for people of all abilities. After Lugnaquilla, Mullaghcleevaun is the second highest peak in the Wicklow Mountains and the 8th highest overall in Ireland. The summit of Mullaghcleevaun sits at 2,785 feet (849 meters). Starting at the town of Lacken, you can walk to the top via the Black Hill route. Near the summit, you will find Lough Cleevaun, a small lake sitting in a little scooped out area. This depression at the top is probably where the name of the mountain comes from — in Irish Mullach Cliabháin means “summit of the cradle.” 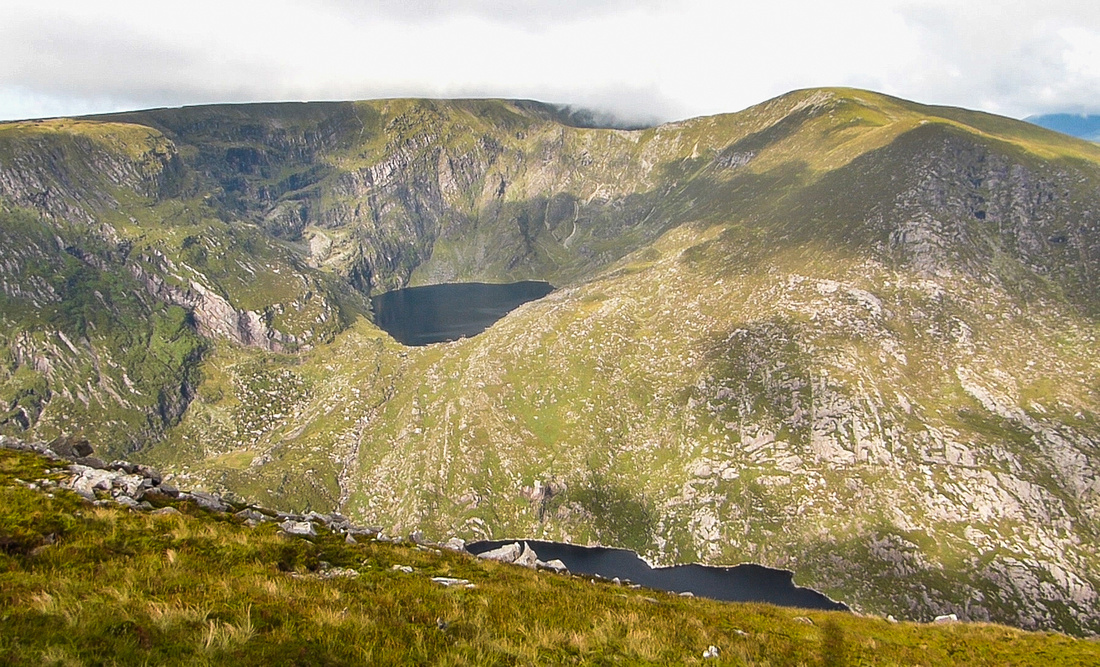 Found near Killarney on the edge of Killarney National Park, Mangerton is the highest peak in a range of mountains with the same name. The summit has an elevation of 2,749 feet (838 meters), and is covered in boggy, wild landscape. The best route to the top is known as the “Devil’s Punchbowl Route,” up the north-west face of the mountain. The 6 mile hike is best in good weather given the boggy nature of the mountain which is made worse by rain and fog. With a peak elevation of 2,740 feet (835 meters), Caherconree in the Slieve Mish mountain range rounds out the top 10 list of highest mountains in Ireland. Set in the gorgeous green landscape of Dingle in Co Kerry, the mountain is often hiked at the same time as its slightly taller neighbor, Baurtregaum (#6 on this list). The mountainous area has long been associated with Irish folklore and myths, and there is an ancient fort on the southeast face of the mountain, which gives the peak its name.

Top 10 Things Ireland Is Famous For

What are the best places to live in Ireland in 2021?