The name Glasgow is derived from the Gaelic word ‘Glaschu’, meaning ‘green hollow’ or ‘dear green place’; Glasgow in its very essence is a haven for parkland and greenery. With over 90 parks and formal gardens dotted around the sublime Scottish city, Glaswegians take the outdoors seriously and encourage their visitors to do the same. Here’s our guide to 10 of the best, most historically compelling parks in this dynamic and creative city. 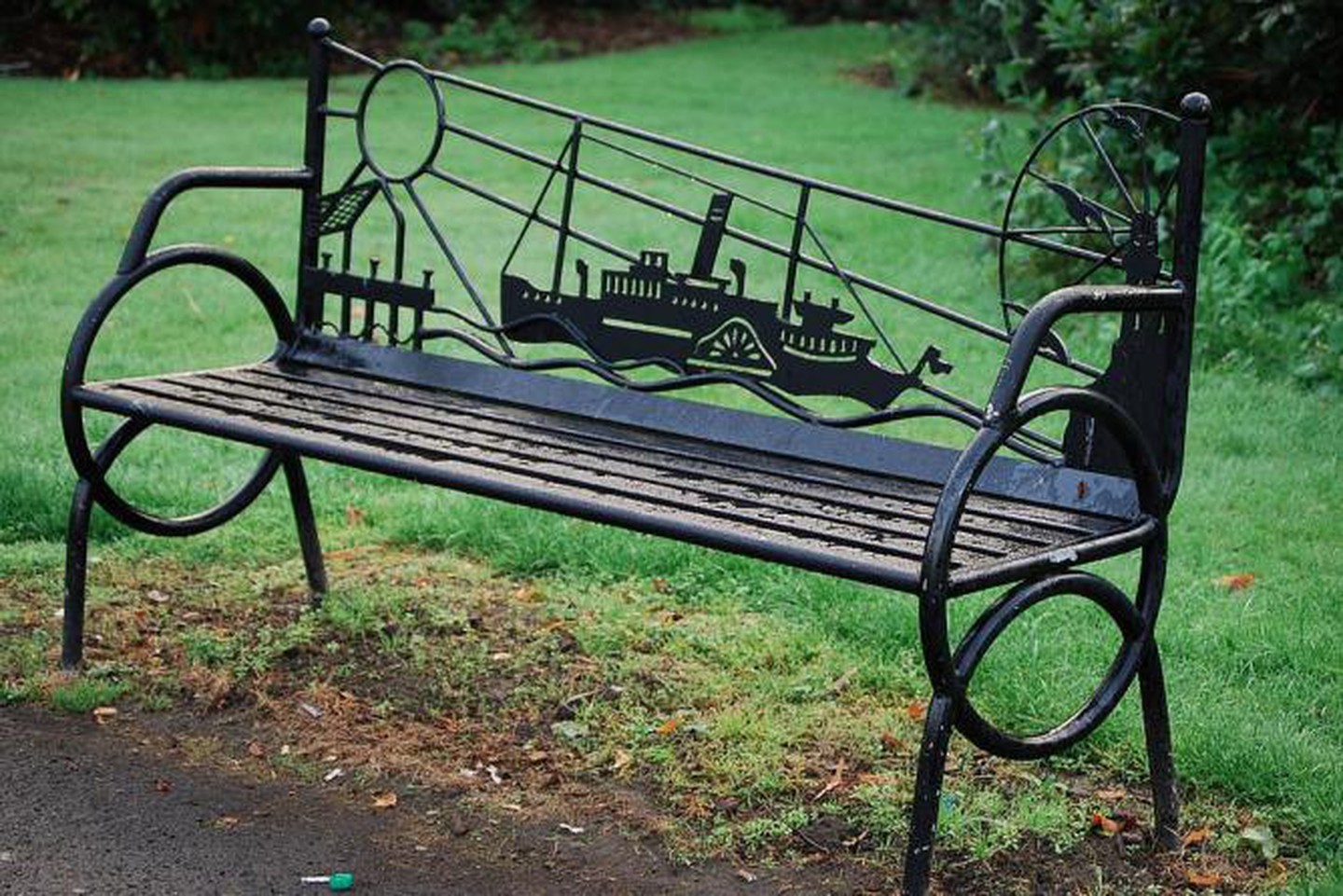 Situated in Glasgow’s trendy West End area full of quirky and idiosyncratic pubs, cafés, and restaurants, visitors can while away a whole day with a jaunt to Kelvingrove Park. Located on the river Kelvin and bordering the famous Kelvingrove Museum and Art Gallery, this gorgeous green space was established in 1852 and had previously been an empty woodland estate before being transformed by eminent gardener Sir Joseph Paxton, a member of parliament at the time. Today a busy public space containing a skate park, bowling and croquet green, and a number of interesting monuments, visitors can expect a lot to do and see during a stroll here. The park has been the venue for a number of important exhibitions including the 1911 Scottish Exhibition of National History, Art and Industry, the area has played an important role in Glasgow’s cultural history. 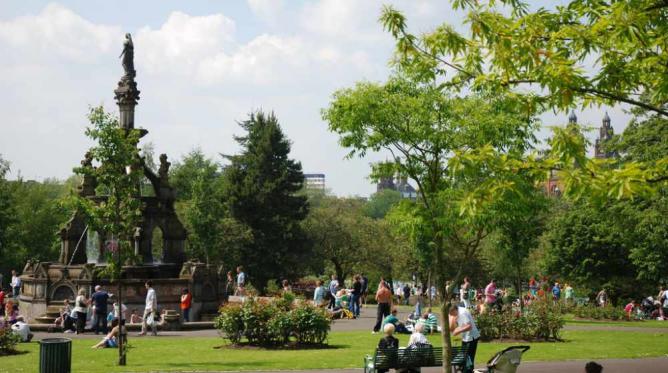 Walk down the winding entrance path to Pollok Country Park and you are almost immediately greeted by a fold of Highland Cattle. Having been bred on the grounds since 1830, the cows have come to be the park’s signature feature, appearing at various galas and show days to reach iconic local status. Venturing further into the park guests will find a number of other attractions including the National Trust for Scotland venue Pollok House. This grand Edwardian manor was once the home of the Maxwell family, a 13th-century clan who were members of the Scottish nobility. Today the house and gardens are open to the public, containing original furnishings used by the Maxwell family as well as a world-class selection of art documenting the life of the Spanish royal family, a collection which includes pieces by eminent artists such as El Greco and Bartolomé Esteban Murillo. The building includes an Edwardian kitchen restaurant situated in the old servant’s quarters, perfect for a spot of afternoon tea. 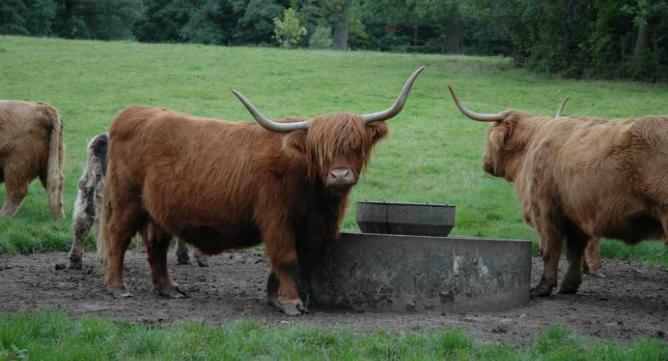 This sprawling 58-acre park is a family-friendly gem in the very heart of the city’s South Side. Gifted to the people of Glasgow in 1906 by the city council, the park has been a much-loved recreational space for over a century. Having been awarded Green Flag status, space is a hub of wildlife, plants, and greenery, and is a setting that provides wonderful moments of peace and tranquility in Scotland’s most densely populated city. Take a stroll around the pond and feed the ducks, have a go at rollerblading in the skate park, or explore the park’s winding pathways which lead to a beautiful waterfall. With outdoor gym equipment including elliptical trainers and weights, fitness lovers can take advantage of the excellent facilities or join one of the park’s various running clubs. The recently renovated Boathouse Café is an absolute must-visit whilst visiting Rouken Glen Park, serving breakfasts, light meals, and coffees, and offering idyllic seating overlooking the tranquil waters of the pond.

On the Northside of the city lies Mugdock Country Park, a mixture of formal and informal landscapes which was once home to the noble Clan Graham. The ruins of Mugdock Castle in the center of the park make for an exciting day of exploration, where generations of the Grahams once lived whilst fighting in the Wars of Scottish Independence. The perfect site for walking, cycling, orienteering, and hiking, visitors don’t have to search long for something to do in this ancient woodland. For children, the countryside ranger service provided by the park runs activity days to teach kids about the park’s wildlife, with the aim of simultaneously raising awareness of environmental issues. The visitors center contains a café and shop where visitors can buy local artwork, sewing, and pottery goods. 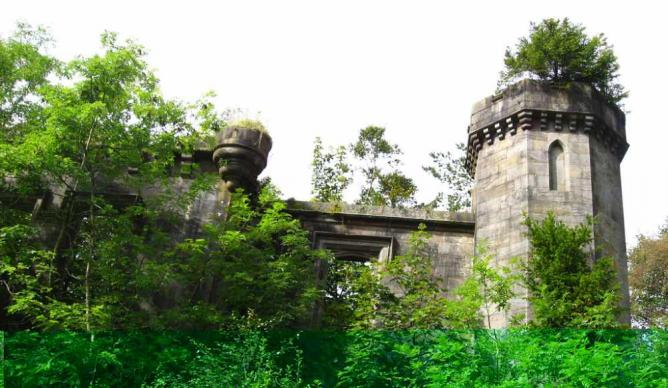 Established in 1886 for Queen Victoria’s jubilee, this West End park is a valued piece of Great Britain’s history. Its facilities include tennis courts, basketball courts, and a putting course, as well as a model yachting pond where visitors can see swans and ducks. For a moment of reflection, guests can visit the memorials for the local residents who gave their lives in World Wars I and II. These spaces are perfectly tended and feature a number of bright and colorful flowerbeds, a vibrant homage to the city’s brave citizens. Victoria Park is also home to a number of the city’s sports clubs and events, including the Victoria Park Athletics Club and the Junior Park Run for athletes aged 4-14 years old.

The second-largest park space in the city, Linn Park stretches over 82 acres of lush greenery. Open all year round, visitors can walk, jog and picnic in the summer, and can return during the winter for stunning snowy walks and excellent sledding areas. The park is home to an 18-hole golf course, two children’s playgrounds, and a number of historic bridges stretching over the stream. With plentiful well-tended paths leading through the forest, guests can choose their walking route in terms of length and difficulty, marveling at the flora, fauna, and waterfalls dotted around the grounds. For horse riders and animal lovers, there is a charitable equestrian center nestled within the park. The venue provides affordable lessons for the general public, as well as hacking experiences where professional instructors lead trails around the park. 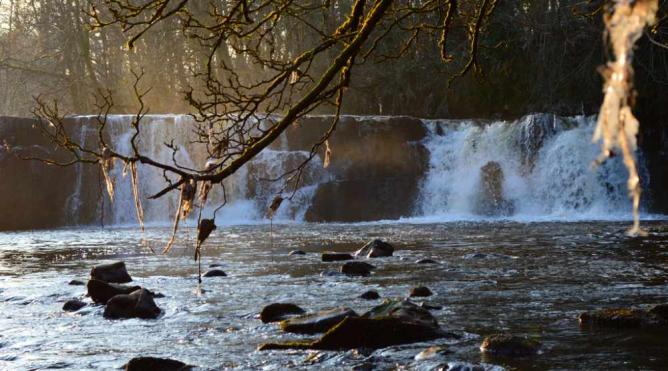 Situated in Glasgow’s East End, this immaculately kept and well laid out park was officially opened in 1870 by King Edward VII. Its many benches, picnic spaces, and pathways make the park an excellent walking and leisure space which is highly popular during the summer months. Those who make it to its highest point will see stunning views of Ben Lomond in the distance and will pass two historical fountains on the way. Visitors can take in the rich history of Alexandra Park before enjoying its more modern facilities such as a golf course, an orienteering track, children’s playgrounds, and a bowling green.

An emblematic city landmark, The Glasgow Botanic Gardens were founded in 1817 by the celebrated botanist Thomas Hopkirk. With over 3000 plants coming together to form the nucleus of the collection, the gardens were initially set up on Sauchiehall Street in the city center before being moved to the banks of the River Kelvin. The gardens have been gradually flourishing over time with the help of a number of famous botanists, including William Jackson Hooker. Today space is a glorious 27-acre exhibition of plants, vegetables, and Victorian cast-iron glasshouses, the most notable of which is the Kibble Palace. This 19th-century glasshouse contains a number of ornate statues and exotic plants, and in 2004 was given a £7 million restoration to repair corrosion damage and increase the exhibition space. With the botanic gardens also being a concert venue where visitors can view a number of musical events, including parts of the acclaimed West End Festival, the park is a hub of life and activity. 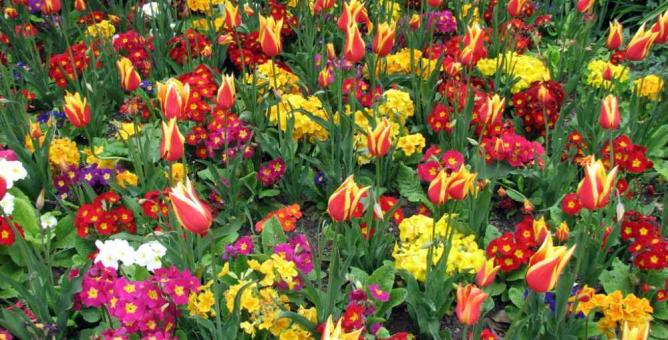 Auchinlea Park lies on the outskirts of Glasgow’s East End, with its main attractions being Provanhall House and Blochairn House, two A-listed buildings. With both datings back to the 15th century, Provanhall House, in particular, has gained some allure due to its history as the previous hunting lodge of King James IV and boasts many colorful ghost stories. The master bedroom is said to have been the setting of a number of paranormal sightings, and allegedly houses the ghost of a soldier who murdered his wife when he returned from war to find her pregnant with another man’s child. Those brave enough to explore can delight in the manor’s spooky history, or visitors can steer clear by traversing the pretty garden grounds, home to many beautiful flower beds and green spaces. The Glasgow Fort Shopping Centre on the park’s southern boundary provides a great opportunity for shopping after a park visit and offers a number of restaurants and cafes in which to grab a bite to eat. 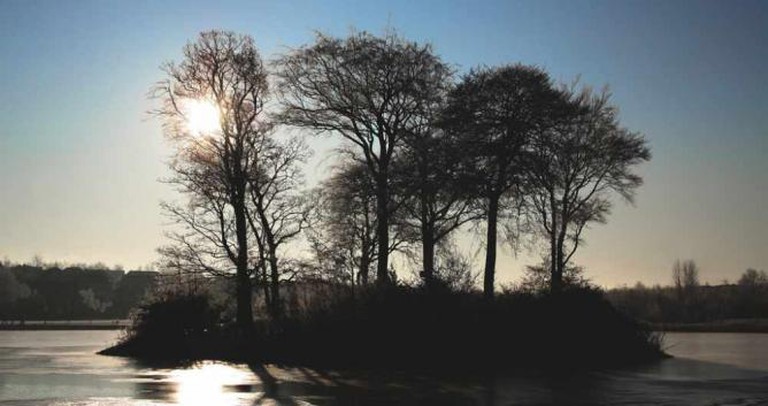 This 4 Star Visit Scotland accredited activity center makes for the perfect day out in East Kilbride, a large town to the south of Glasgow. The park’s 16-acre loch plays host to a number of exciting water sports activities, including windsurfing, power-boating, kayaking, and open water swimming. These activities are provided by notable organizations such as the Royal Yachting Association and the Scottish Canoe Association, which seek to ensure that the park’s natural facilities are put to good use. Visitors who don’t wish to get wet can enjoy a stroll around the loch and visit the 15th century Main’s Castle situated on its banks. This private property was once home to the Comyns, a noble Scottish family who included John III Comyn once Lord of Badenoch and Lord of Lochaber. Gracie’s on the Loch Caféis a perfect place to enjoy a warming coffee and freshly baked scone, with views across the calm waters ensuring a memorable visit to the James Hamilton Heritage Park. 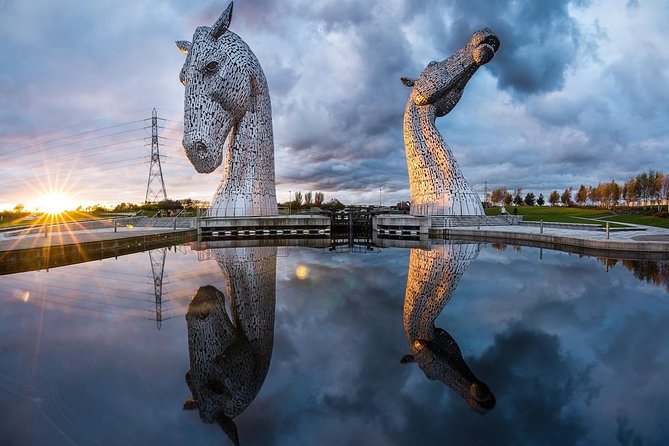