There’s so much to see and do in Vancouver that you might forget to check out what the surrounding area has to offer. A transport hub with great access to the rest of British Columbia, the West Coast metropolis is the perfect jumping-off point for day trips for foodies, history buffs, outdoor adventurers and more. Here are our top 10 escapes from the city.

This ocean-facing city is home to Lonsdale Quay Public Market – complete with food stands and artisan boutiques – plus a once-gritty shipyard that’s been transformed in recent years with boardwalks, restaurants and boutiques (many of them in restored factory sheds). The highlight is the Polygon Gallery, a dramatic contemporary art space that lures culture fans from around the region. Beer enthusiasts are also enticed to North Van – there’s a clutch of microbreweries a ten-minute walk away on East Esplanade. Further inland is one of North Van’s top attractions, the Capilano Suspension Bridge Park. It can be reached by shuttle or bus routes from downtown Vancouver. 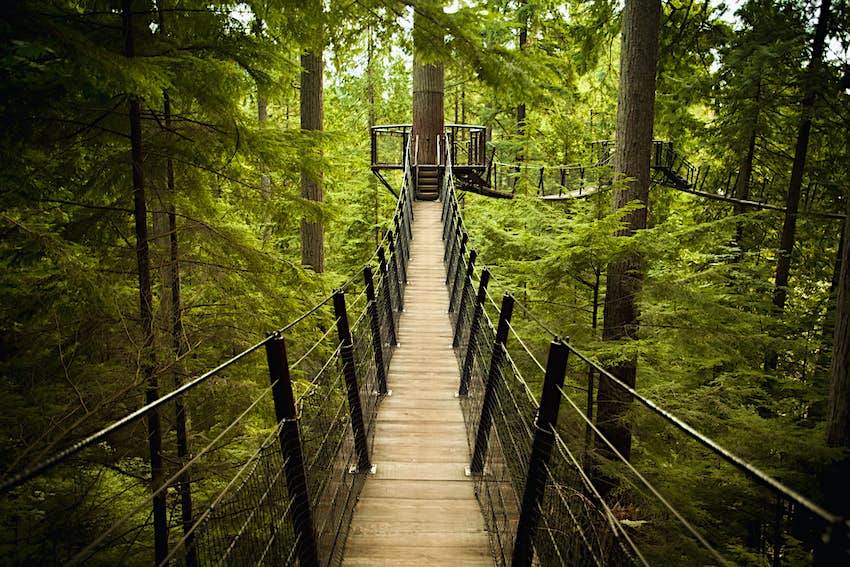 How to get to North Vancouver: It’s an easy trip from downtown Vancouver, just hop on the 12-minute SeaBus transit ferry from Waterfront Station to Lonsdale Quay and you’ll step off in North Van.

2. Vancouver Harbour and beyond

If the rippling water is calling your name, there are dozens of ways to leave the shore and hit the waves around Vancouver. Harbour Cruises’ one-hour tour meanders languidly alongside the city’s waterfront. But its half-day Indian Arm option is a much deeper excursion. As the city shrinks away, you’ll be slowly enveloped in a forested, sheer-cliffed natural wonderland that feels like a Norwegian fjord. 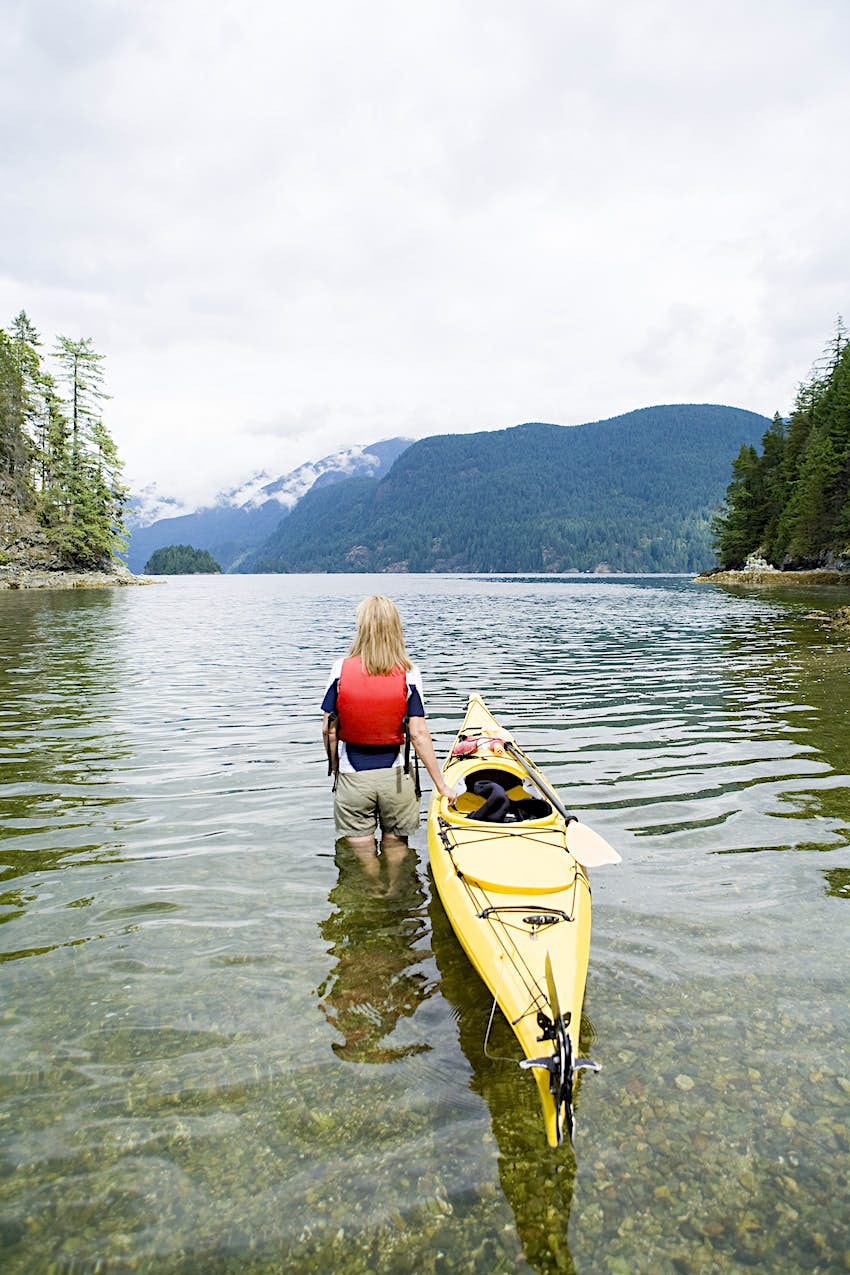 Look out for the community of Deep Cove on your cruise – and consider returning for a kayak or stand-up paddleboarding adventure. Deep Cove Kayak Centre offers tranquillity-hugging guided tours from here that make you feel like cities were never invented.

How to get to Vancouver Harbour: There are many ways to hit the water, but Harbour Cruises can be found near Devonian Harbour Park with more options as you head into Stanley Park.

Cruise amid towering mountains and tree-covered islands to the stunning Bowen Island. Step off in Snug Cove to explore wooden boardwalks, bright-painted storefronts and forest-lined trails where sightings of bald eagles and Bowen’s resident deer are common. Need more? Follow the trail to Opa, a gigantic ancient Douglas fir that’s a highlight for many visitors. 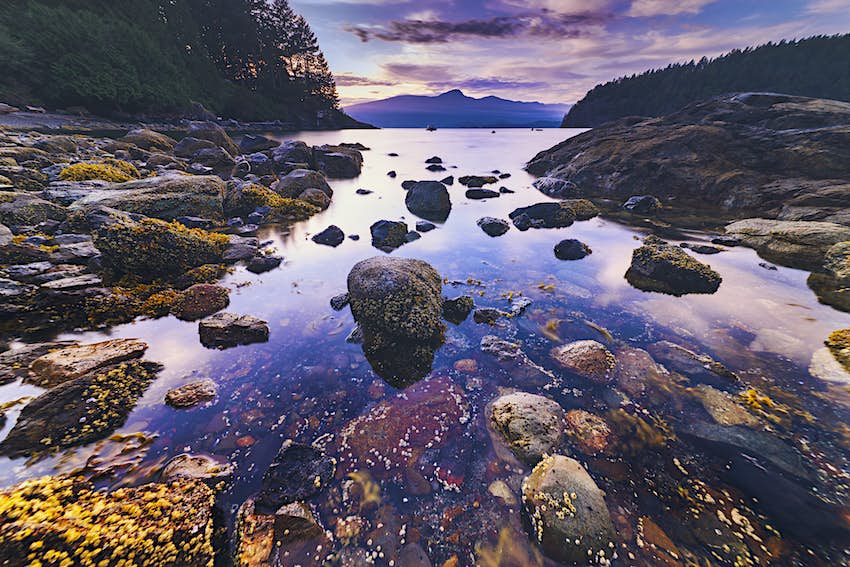 How to get to Bowen Island: Perhaps the best boat trip you can take in this region is the BC Ferries’ service from West Vancouver’s Horseshoe Bay to Bowen Island. The 250 express bus from downtown Vancouver takes you directly to the ferry dock where you can hop on a 20-minute sailing to Bowen.

The popular Sea to Sky Gondola is a super-scenic cable car ride that shimmies up a forested mountainside. The area’s other attractions include the family-friendly Britannia Mine Museum – don’t miss the underground train ride – and the West Coast Railway Heritage Park with its vintage train collection. Also save time for Shannon Falls Provincial Park, home to one of BC’s highest waterfalls. 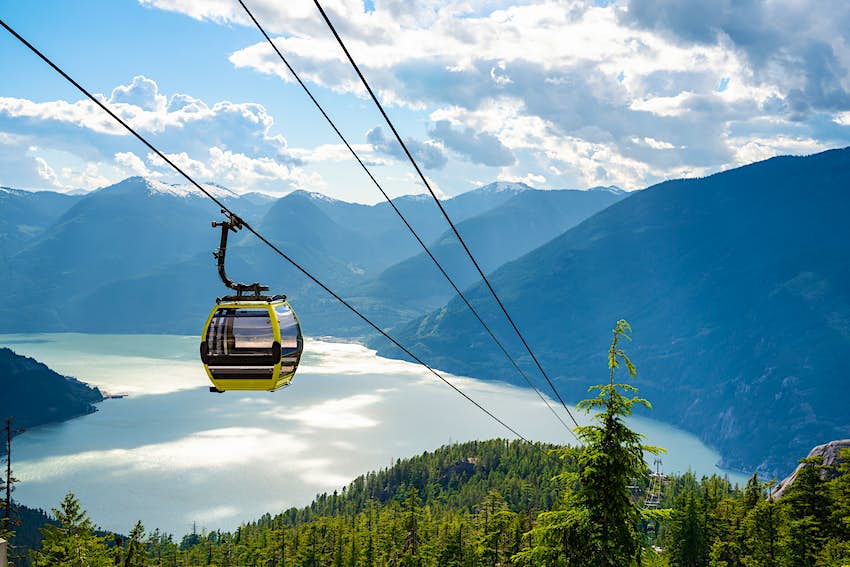 How to get to Squamish: Hire a car for a one-hour Sea to Sky Highway drive north of the city. The dramatic cliffside road is one of BC’s most spectacular routes, but it’s also home to several great attractions, mostly near the town of Squamish less than an hour away. If driving is not an option, there are shuttles that will take you from Vancouver to Squamish, like the BC Connector, Skylynx, and the Squamish Connector.

An hour past Squamish, the Sea to Sky Highway reaches Whistler. A winter playground loved by locals and visiting ski and snowboard fans – the icicle-draped alpine village is beautiful year-round – there are almost as many summer visitors to this area. Don’t miss the striking Audain Art Museum, but also save time to plunge into the great outdoors. There are hikes and bike routes (rentals available) for all abilities and energy levels plus activities from ziplining to river rafting. Don’t miss a ride on the eye-popping scenic Peak 2 Peak Gondola (glass-bottomed car recommended) and then inch across the lofty Cloudraker Skybridge, a steel suspension span with a see-through deck. 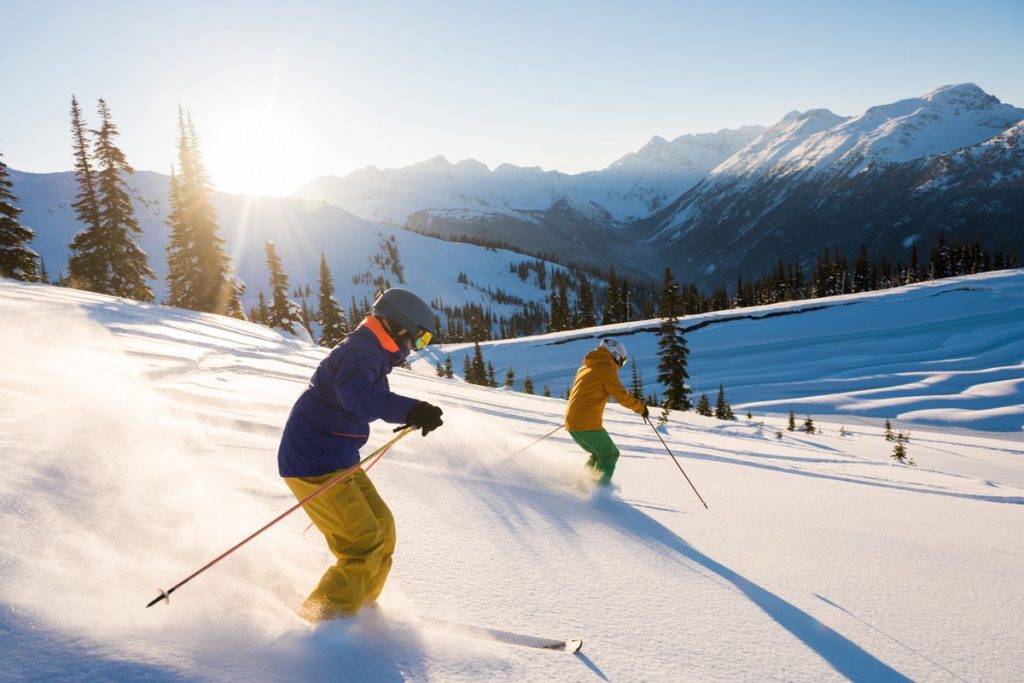 How to get to Whistler: Those who hire a car for the nearly two-hour drive will have more freedom, but similar to Squamish, a number of shuttle buses like Epic Rides and Skylynx will get you there.

It’s no secret that BC’s craft ale scene has surged in recent years. And while Vancouver is studded with lip-smacking tasting rooms, you can also take an unofficial “beer train” out to the suburbs for an afternoon of quaffing with the locals. Radiating along the street like a row of beer taps, you’ll find several intriguing breweries, each with its own inviting tasting rooms and friendly bars.

How to get to Port Moody: Hop on the SkyTrain transit service from downtown Vancouver to Moody Centre Station (it takes about 45 minutes), then walk across the bridge to Murray St in the heart of historic Port Moody.

This charming fishing village fringes the giant Fraser River. But its boat-bobbling wharf isn’t just about wood-sided stores and great fish and chip joints (we recommend Pajo’s) – there’s tons of history here too. Shipbuilding and fish processing made this one of BC’s busiest communities in the late 1800s, and its two National Historic Sites evoke the story perfectly. The Gulf of Georgia Cannery tells you what working as a “slimer” in a fish plant was like, while exhibits at the Britannia Heritage Shipyard illuminate everything from prohibition-era rum-running to WWII Japanese internment.

How to get to Steveston: It’s an hour by transit from Vancouver (Canada Line SkyTrain to Richmond-Brighouse Station then a 407 bus).

Richmond has a modern-day pan-Asian flavor that reflects a community where many locals trace their heritage to China, Korea, Vietnam and beyond. It’s also revered as the home of North America’s richest and most authentic Asian dining scene. 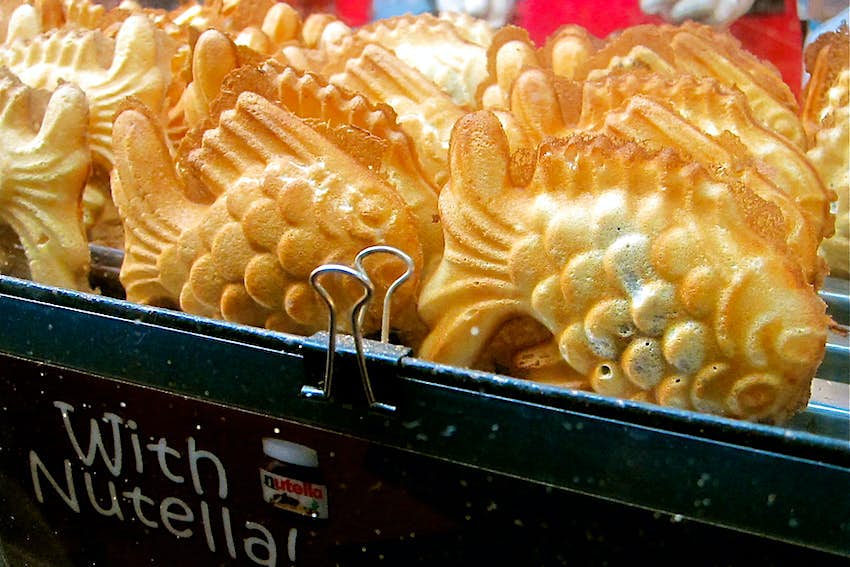 Start with lunch at Parker Place, a Hong Kong-style mall with a food court like a hawker market and dishes ranging from juicy pork buns to crispy Vietnamese subs. Then explore nearby Aberdeen Centre’s culturally-immersive stores, stocking everything from Chinese teas to quirky Japanese dollar store trinkets – save time for a Taiwanese shaved ice treat in the upper floor food court.

Take the foodie theme further at the clamorous Richmond Night Market. Running Fridays to Sundays between May and October, it’s lined with more than 100 steam-shrouded food stands. Arrive hungrily and with a sense of culinary curiosity and get ready for stinky tofu, dragon’s beard candy, nori-topped Japanese fries and much more. Easy to reach from Vancouver, it’s a short walk from Canada Line’s Bridgeport Station.

How to get to Richmond: Richmond is a 20-minute Canada Line hop from Vancouver.

New Westminster – aka the “Royal City” – was the region’s main settlement before Victoria took over in 1866. Start by window-shopping on historic Columbia St, complete with a visit to the landmark Anvil Centre. It’s the home of two free-entry attractions: the popular New Westminster Museum and the New Media Gallery, where avant-garde contemporary exhibits are displayed.

A few steps away, cross the train lines to the other side of the tracks and discover a restored linear park that runs alongside the Fraser River like a grass-fringed boardwalk. Look for public art and grand shoreline views here – herons and cormorant sightings included. Hungry? Check out the food stands at the indoor River Market nearby.

How to get to New Westminster: It’s a 25-minute SkyTrain ride from downtown to New West.

If you’ve been meaning to try birding – a pastime that’s surged in popularity in recent years – BC’s Lower Mainland is also a hotbed of easy-access opportunity. Ladner’s Reifel Migratory Bird Sanctuary, Delta’s Boundary Bay Regional Park and North Vancouver’s Maplewood Flats Conservation Area are all justifiably popular. But Richmond’s Iona Beach Regional Park may be the best of the bunch. Stretching along the Fraser River shoreline, this relatively compact green space is typically home to a huge diversity of local and visiting birds. Bring binoculars and keep your eyes peeled for eagles, hawks, red-winged blackbirds, Anna’s hummingbirds and many more. It’s the kind of back-to-nature haven that couldn’t feel further from the bustling streets of downtown Vancouver. 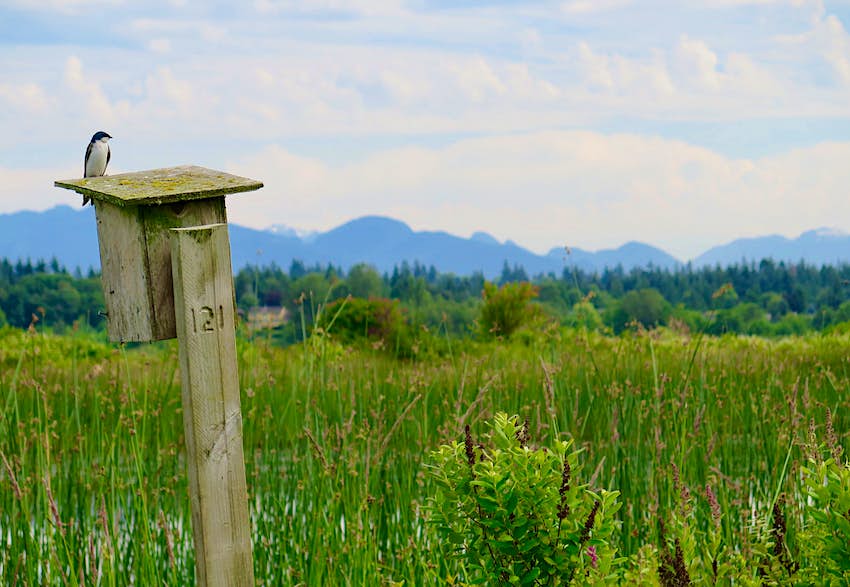 How to get to Iona Beach: Located near the Vancouver International Airport, travelers can drive to the park, or take the Canada Line Skytrain to the airport and then take a taxi.