Moving to Switzerland? Find out where you should start your new life with our guide to the 10 best cities in Switzerland for ex-pats.

Despite its compact size, Switzerland is a land of surprising contrasts nestled in the heart of Europe. From the palm tree-lined shores of the southern lakes to the quaint towns and cities of the Swiss plateau, there is something for every taste in this small country. But knowing which city is right for you can be challenging for an ex-pat moving to Switzerland.

Whether you settle in the cosmopolitan Geneva, the laidback Lugano, or the bustling Zurich will largely depend on you. Think about how you want to live your Swiss life. With a high quality of life throughout the alpine nation and great public transit links, you might not think it matters. However, finding the right home for you and your family can make all the difference to your new life abroad. To give you some inspiration, here’s our guide to the best 10 cities in Switzerland for ex-pats. 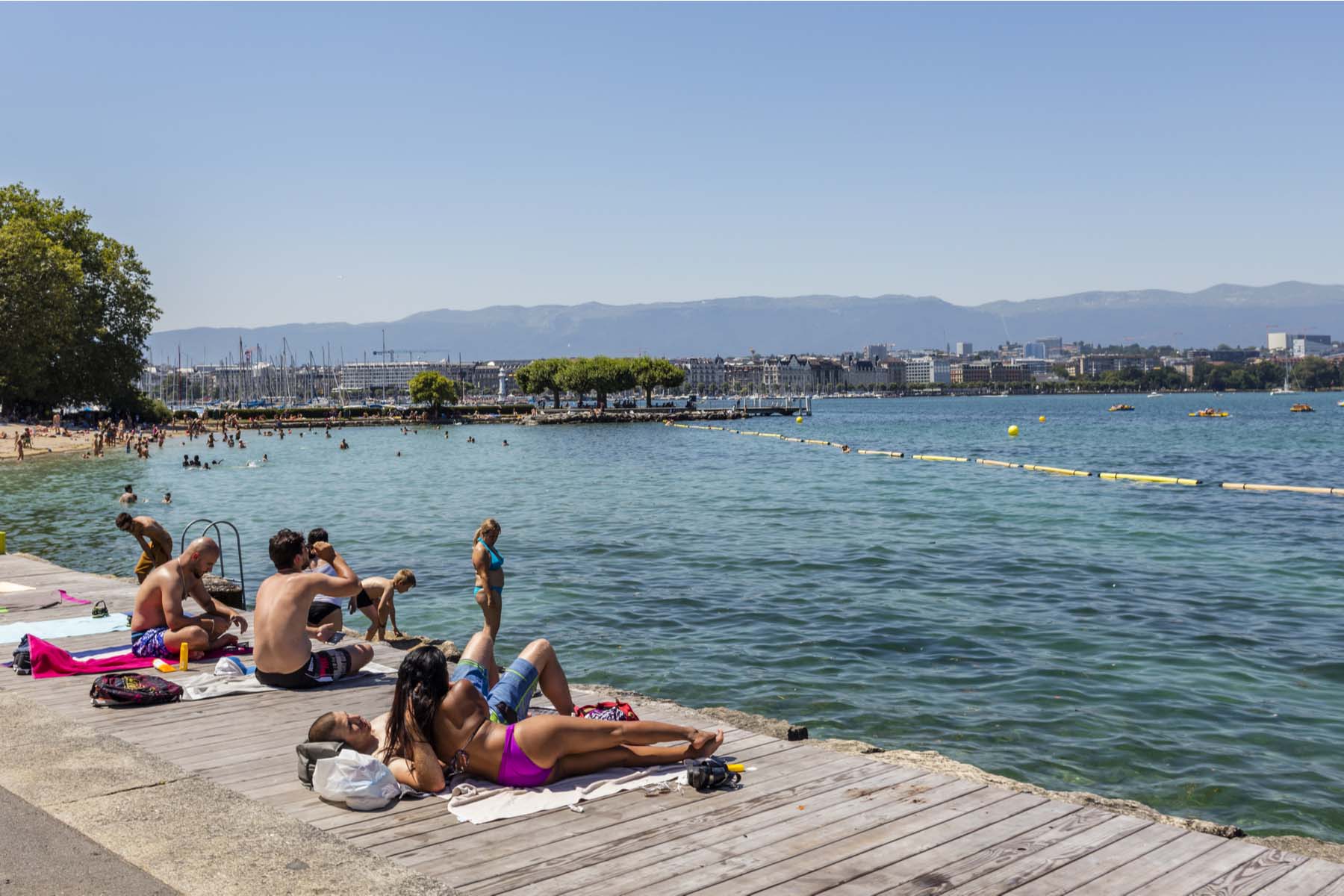 Stretched along the picturesque Lake Geneva, this multicultural gem has long-since been one of the favorite cities in Switzerland for ex-pats. The French-speaking city is home to some of the world’s highest-profile organizations, including the United Nations, Red Cross, and World Health Organization. This makes Geneva popular with diplomats and officials alike, who account for a large number of the city’s ex-pat population.

While Geneva has historically suffered from a reputation of being a little stuffy and soulless, these days Switzerland’s second-largest city enjoys a more laidback vibe. The old town is beautifully preserved and when the summer hits there are few better places for an evening drink and stroll. Geneva also has excellent transit links, while many of Europe’s best ski resorts are a short drive away. 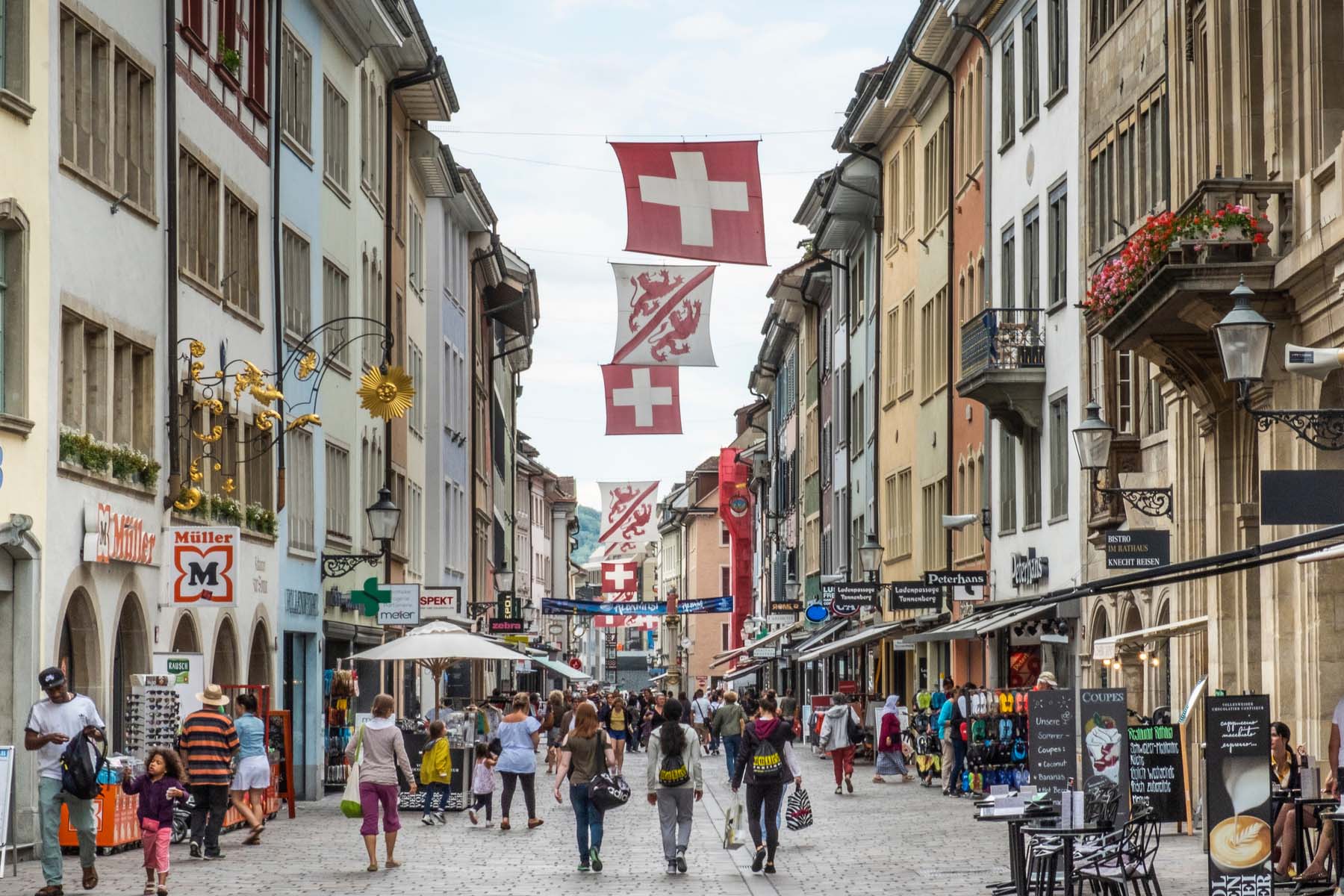 Many ex-pats overlook Winterthur when looking at cities in Switzerland to call their new home, but don’t make that mistake. This cozy little German-speaking city is Switzerland’s sixth-largest and has a surprisingly large ex-pat population. This makes it a great place to get settled in your new Swiss home, and with Zurich just a twenty-minute train ride away, you won’t be far from the bustle of the big city.

For a city of its size, Winterthur definitely packs a punch when it comes to culture. You’ll find museums, art galleries, and plenty of events throughout the year. The city is also pretty small, meaning it’s easy to get around and the city center is extremely walkable. Generally speaking, rental costs and house prices in Winterthur are noticeably cheaper than in Zurich, meaning you’ll get a lot more bang for your franc. 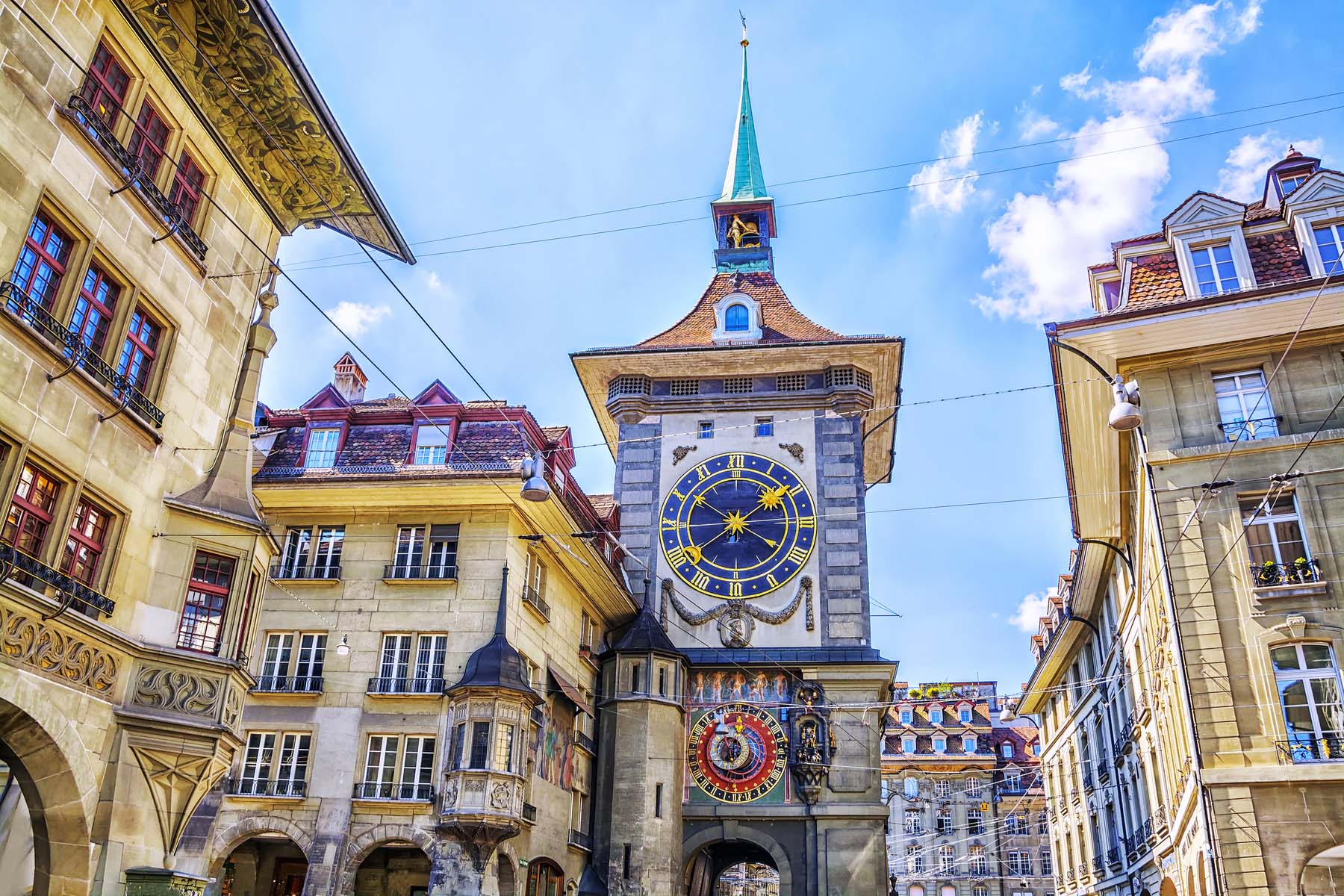 Expats moving to Switzerland might be surprised to find out that the country’s capital is not Geneva or Zurich, but the relatively cozy city of Bern. Nestled near the linguistic border between French and German Switzerland, the city is home to the Swiss parliament. It also has a UNESCO World Heritage-listed city center, some of Switzerland’s best shopping and, of course, the famous bearpit. Home to the city’s enduring symbol, bears.

For a capital city in the heart of Europe, Bern retains that distinctly small-town feel. This is one of the great attractions for the many ex-pats who call the city home, alongside the postcard-perfect streets and laidback attitude. While Bern is well-connected with the rest of the country, when summer hits, the locals are more interested in floating along the turquoise waters of River Aare as it twists through the city. 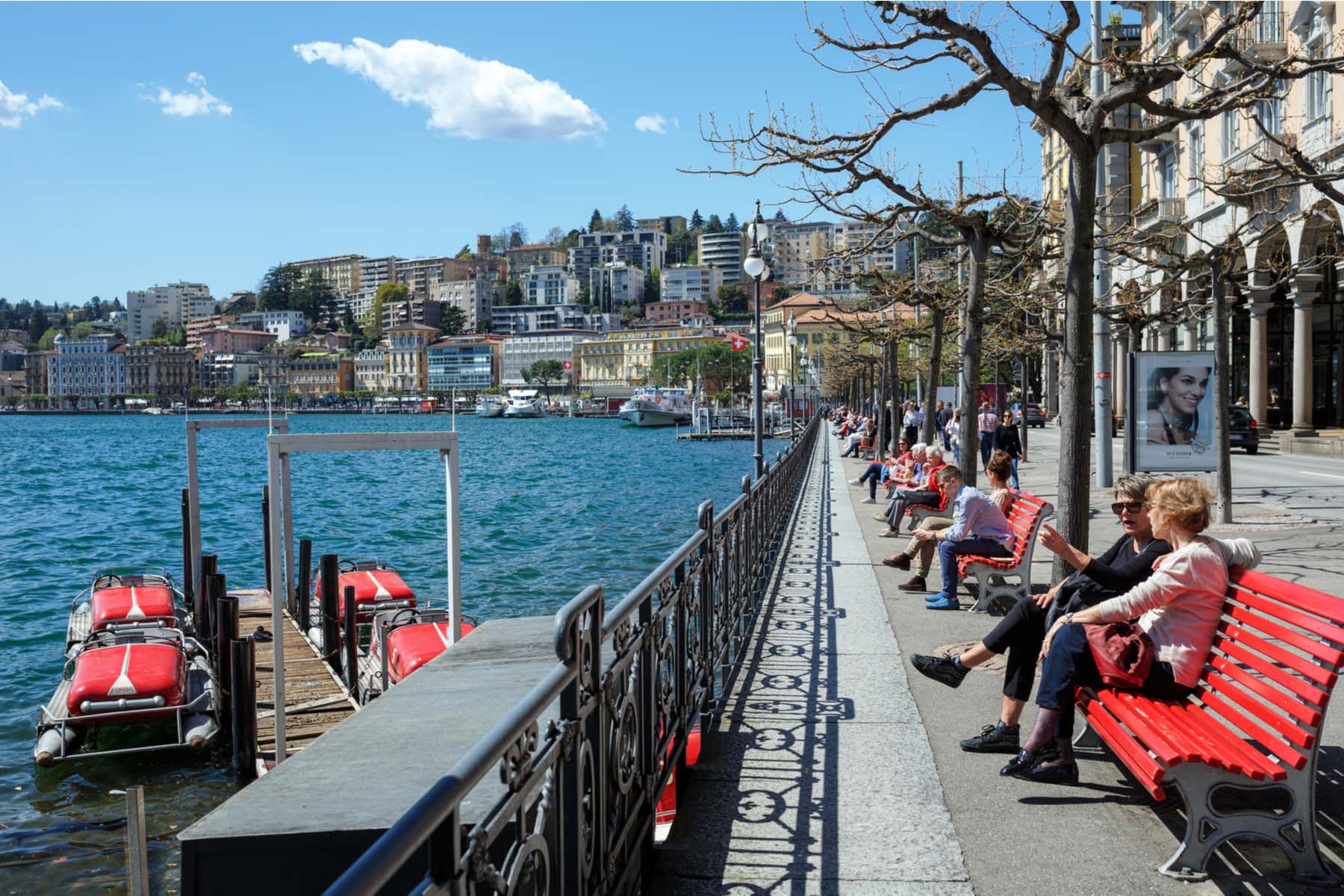 There are few places in the world quite like Lugano. Located on the northern shores of the breathtaking Lake Lugano, the city is seen as the capital of Italian-speaking Switzerland. In fact, it is often said that Lugano is more culturally akin to Milan – just an hour’s drive away over the border – than other cities in Switzerland. From the architecture to the cafe culture and even the balmy Mediterranean breezes, it’s a Swiss slice of la dolce vita.

The warmer climate and laid-back lifestyle attract many ex-pats to this corner of Switzerland. However, due to its mountainous location, you can still expect a generous covering of snowfall come winter. Perfect for those who like to mix things up. If Lugano sounds a little too hectic for you, there are a few other places in the Italian-speaking canton of Ticino you should look. These include lakeside Locarno and the border town of Chiasso. 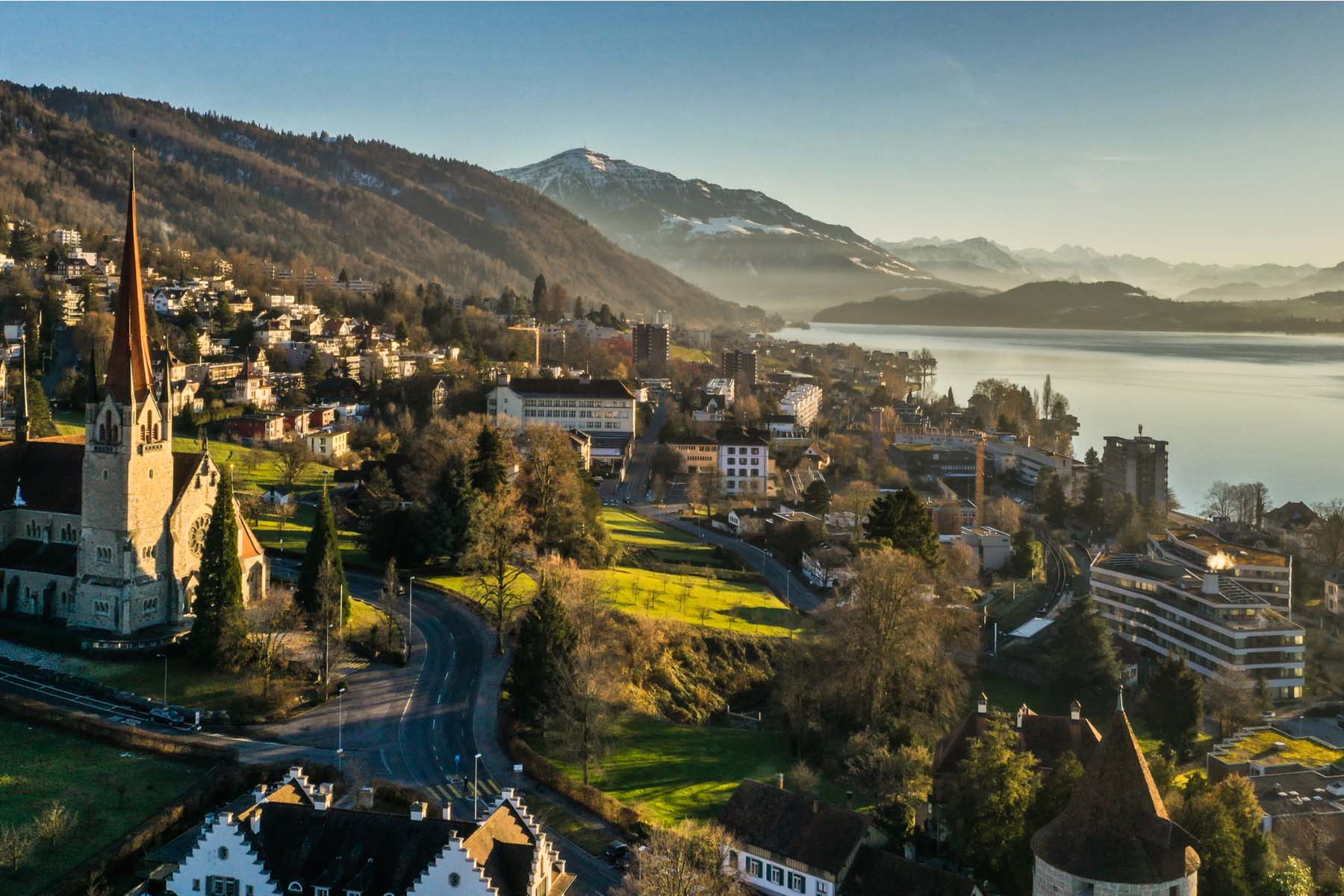 Although technically a town, snug little Zug is another of the best cities in Switzerland for ex-pats. Located between Zurich and Lucerne, German-speaking Zug provides a welcome alternative for ex-pats looking for an altogether quieter Swiss life. And plenty of ex-pats have decided to move to Zug, making it surprisingly multicultural for a town of around 30,000 people. However, with easy access to larger cities and, of course, the Swiss countryside, it’s easy to see why.

Although house prices are increasing in the area, Zug remains cheaper than Zurich, just a twenty-minute train ride away. Being a relatively small town, you won’t find the entertainment options you would in other cities on this list. However, there is still a decent selection of shops and restaurants and, of course, a beautiful lake to enjoy. Zug is definitely a great option for families looking for a little more space and access to greenery. 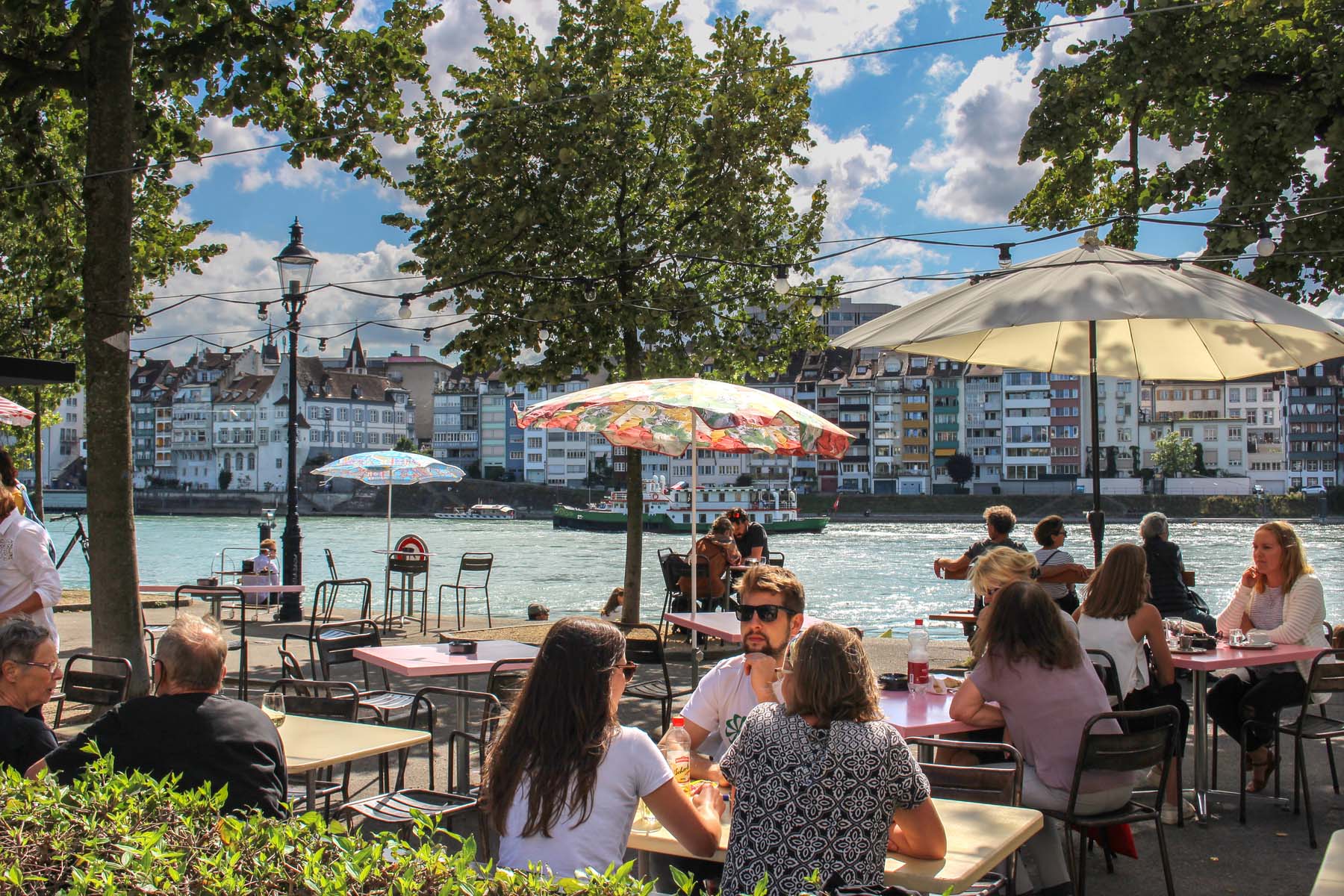 Located near the French and German borders, Basel is seen by many as one of the best cities in Switzerland to live in. This cozy, vibrant city is actually Switzerland’s third-largest. It’s also a cultural center, with a large student population and vibrant nightlife. However, some ex-pats who move to Basel spread their lives over the borders to make things a little cheaper. You can live in Germany, work in Switzerland, and go grocery shopping in France. Whatever works best for you, there are options in the Basel area.

However, whether you’re in Basel or just over the border, there are loads to enjoy in this part of the world. The city’s enchanting old town is home to numerous great bars, restaurants, and boutique shops. Expats living in Basel are also blessed with a lot of outdoor options nearby. Whether exploring the Black Forest in Germany, hiking up the Jura Mountains, or simply lazing along the Rhine River, you’ll never be bored.

Even in a country crammed full of beautiful lakeside locations, few cities in Switzerland come close to Lucerne. Looking for enchanting medieval architecture? Lucerne has it. Are snow-capped mountains looming up all around? Lucerne has these, too. Crystal clear waters that look clean enough to drink? Yep, you guessed it, Lucerne has it all. If you’re looking for the ultimate Swiss experience, you can’t go wrong with Lucerne.

Unsurprisingly, this German-speaking city is popular with ex-pats and tourists alike. It’s small enough to retain that cozy atmosphere, but the churn of visitors gives it an unmistakable big-city buzz. Its size also helps keep transport costs down, as most places are easily accessible. Costs are typically cheaper than Zurich or Geneva but expect to pay more for a view over the iconic Kappelbrug. 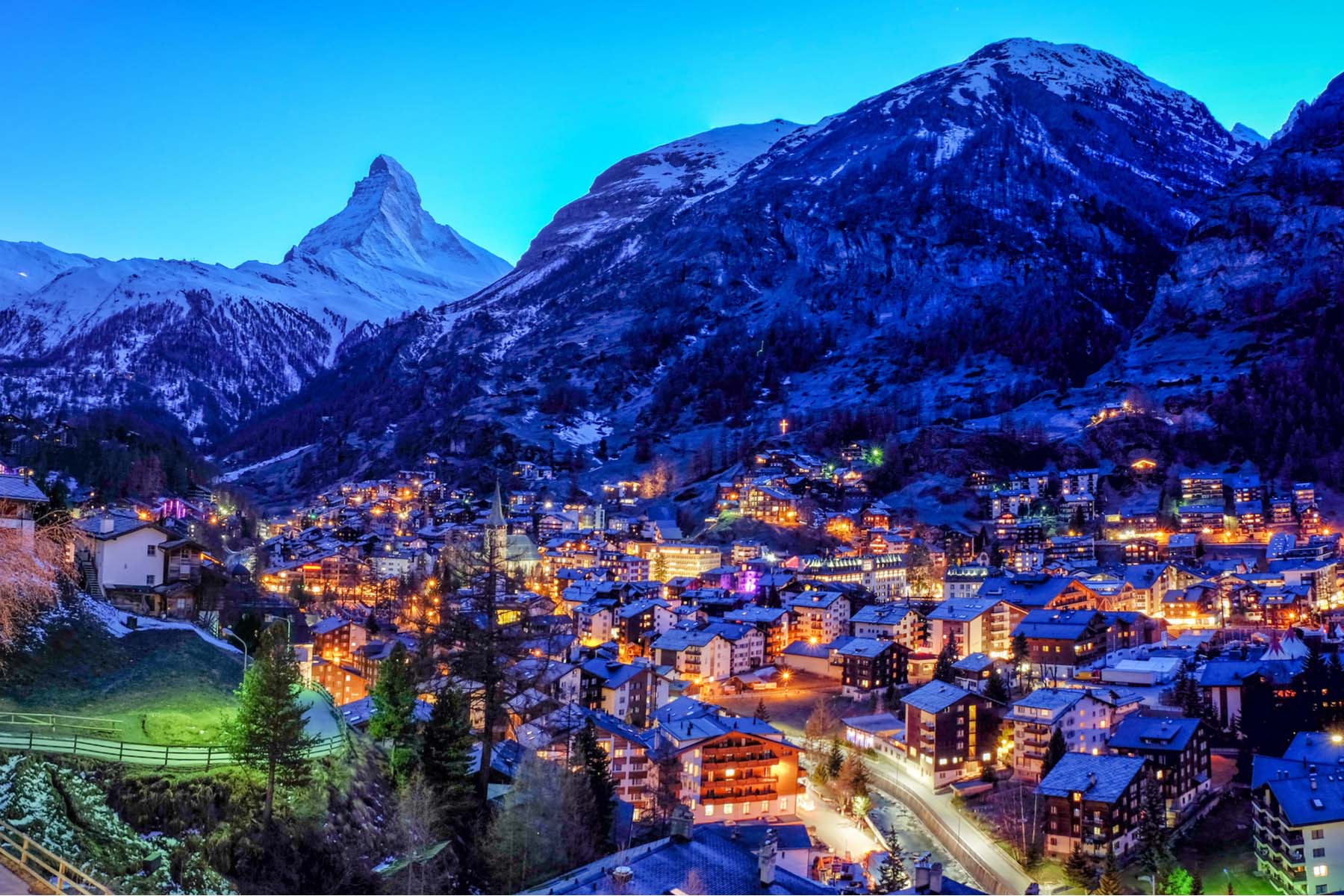 If none of these cities in Switzerland are quite mountainous for you, why not settle down on higher pastures? The French-speaking town of Sion is the capital of the beautiful Valais canton, next to the Italian border. Surrounded by snowy peaks and overlooked by two hilltop castles, the town has all the modern facilities you’ll need. The railway station connects you to Zurich, Bern, and elsewhere, but you’ll probably be too busy up in the mountains.

Outside Sion, you’ll find a whole host of picturesque mountain towns and villages you’ll soon fall in love with. The most famous of these is the ski resort of Zermatt, under the watchful gaze of the Matterhorn. However, while Zermatt attracts crowds all winter, there are quieter options nearby. These include Grimentz, Evolène, and Brig. Perfect if you’re looking for that classic Swiss mountain lifestyle.

No list of the best cities in Switzerland for ex-pats would be complete without mentioning Zurich. The country’s economic powerhouse and largest city is also home to the largest ex-pat community in the country. It won’t take you long to realize why so many foreigners choose to call this German-speaking city home. Great bars and restaurants, excellent transit links to cities across Europe, and the inevitable picture-perfect Swiss lake. What more could you want?

If you’re worried about missing that all-important big-city buzz then Zurich is probably your best bet. Few cities in Switzerland come close to matching Zurich in terms of cultural and entertainment opportunities. However, the Zurich magic comes at a cost. Zurich is one of the most expensive cities in Europe, and you’ll need to look outside the center to squeeze a little more from your francs. Thankfully, the city has an excellent public transit network, which makes soaking up all that magic a little easier. 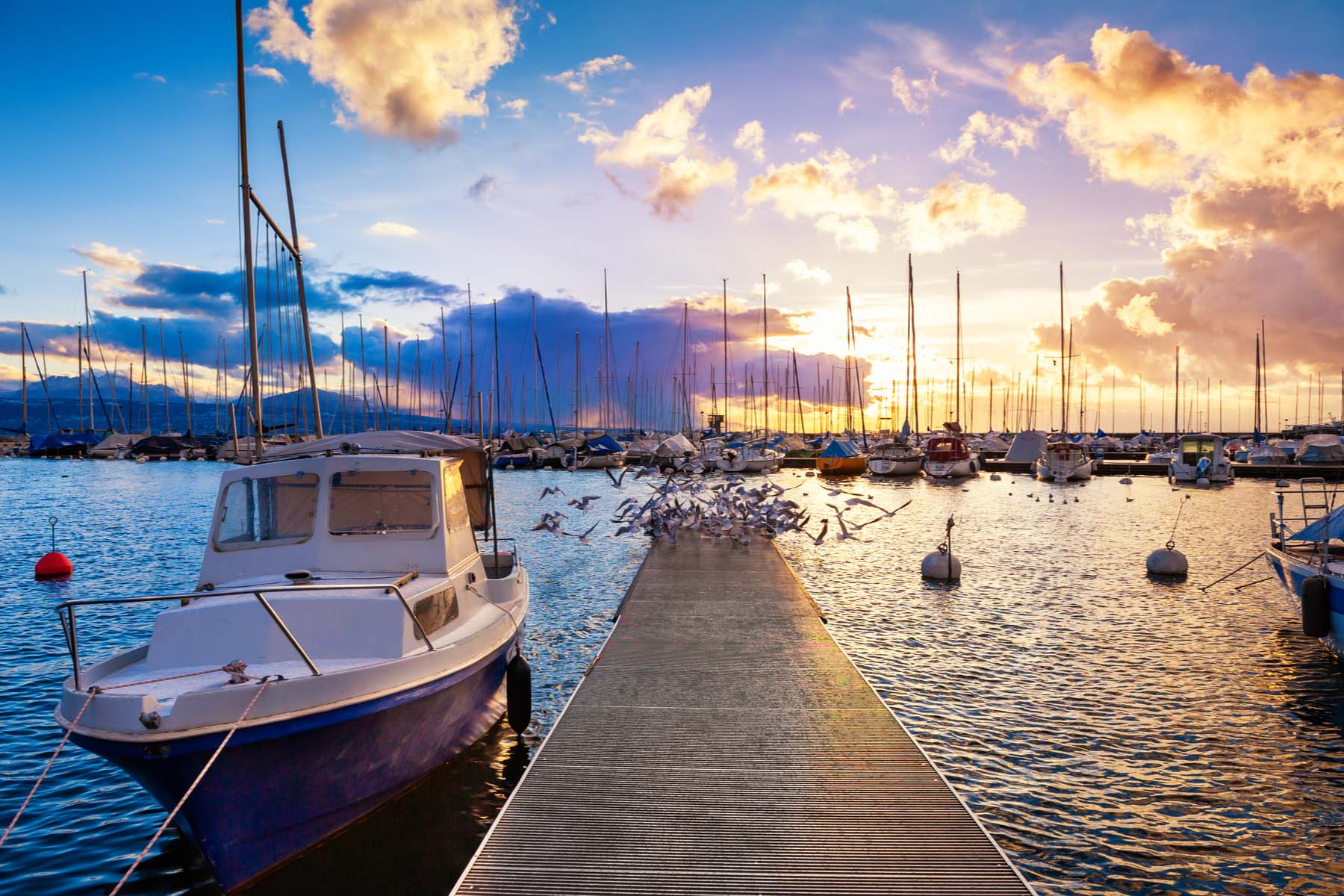 Think we can’t squeeze another lakeside city into this list? Think again. On the shores of Lake Geneva, French-speaking Lausanne is another popular option for ex-pats. The fourth-largest city in Switzerland enjoys a surprisingly cosmopolitan buzz, thanks to its large university and youthful population. It’s also home to a number of international corporations, attracting an ever-growing ex-pat population to the city.

Lausanne is the smallest city in the world to have its own metro system, making it easy to get around. However, if you’re looking for something a little quieter, head east along the shore to the town of Montreux. Residents of this resort town enjoy a mild microclimate and plenty of cultural offerings. This includes the town’s famous jazz festival, which takes place every summer. And, of course, wherever you are the beautiful Alps are just a short hike away.

7 Swiss Musicians You Should Know