Tucked away in the German Alps sits Neuschwanstein castle — a palace that is as much a piece of art like the murals that line its walls.

It’s this artistry and attention to detail that inspired Walt Disney to model his Sleeping Beauty Castle in Disneyland after it. Like Disney, the castle’s original owner was a dreamer and a creative. He built the castle as a tribute to his favorite pieces of art and poetry. Every wall of the castle tells a story of love, heartbreak, triumph, and failure — much like Disney’s movies do.

Take a look inside the castle to see more of what inspired Walt Disney himself.

The castle was originally built for King Ludwig II of Bavaria, who was known as the “Fairy Tale King.” 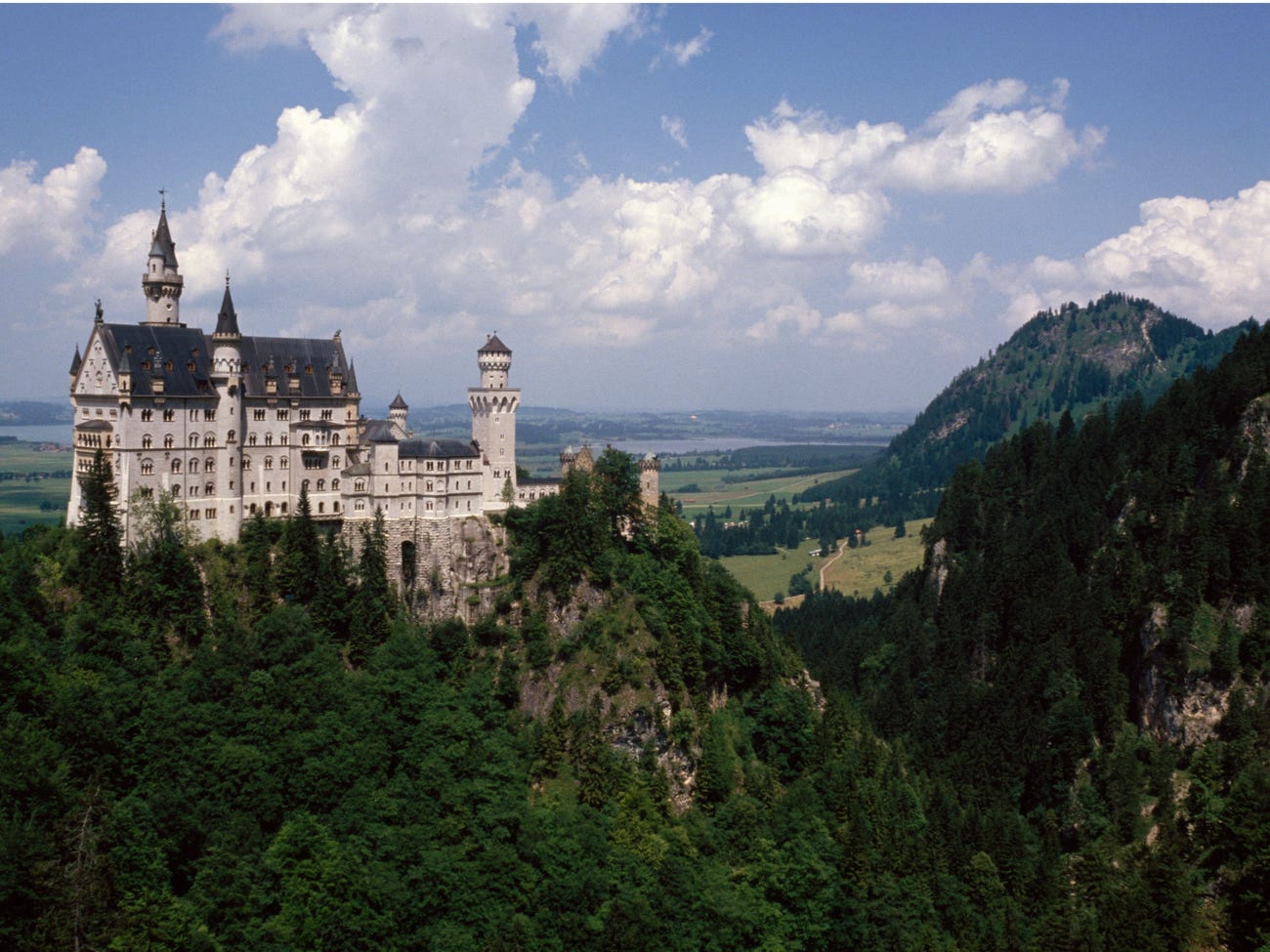 King Ludwig II built the castle as a hideout to pull away from social life after losing the Austro-Prussian war. Construction began in 1869, and it would be a decade until Ludwig was finally able to move in.

Despite being 65,000 square feet, the castle was built for only one person: King Ludwig II. “The location is one of the most beautiful to be found, holy and unapproachable, a worthy temple …” Ludwig wrote to a friend at the time.

King Ludwig II died just a few weeks after moving into the castle, allowing for the palace to be opened to the public. 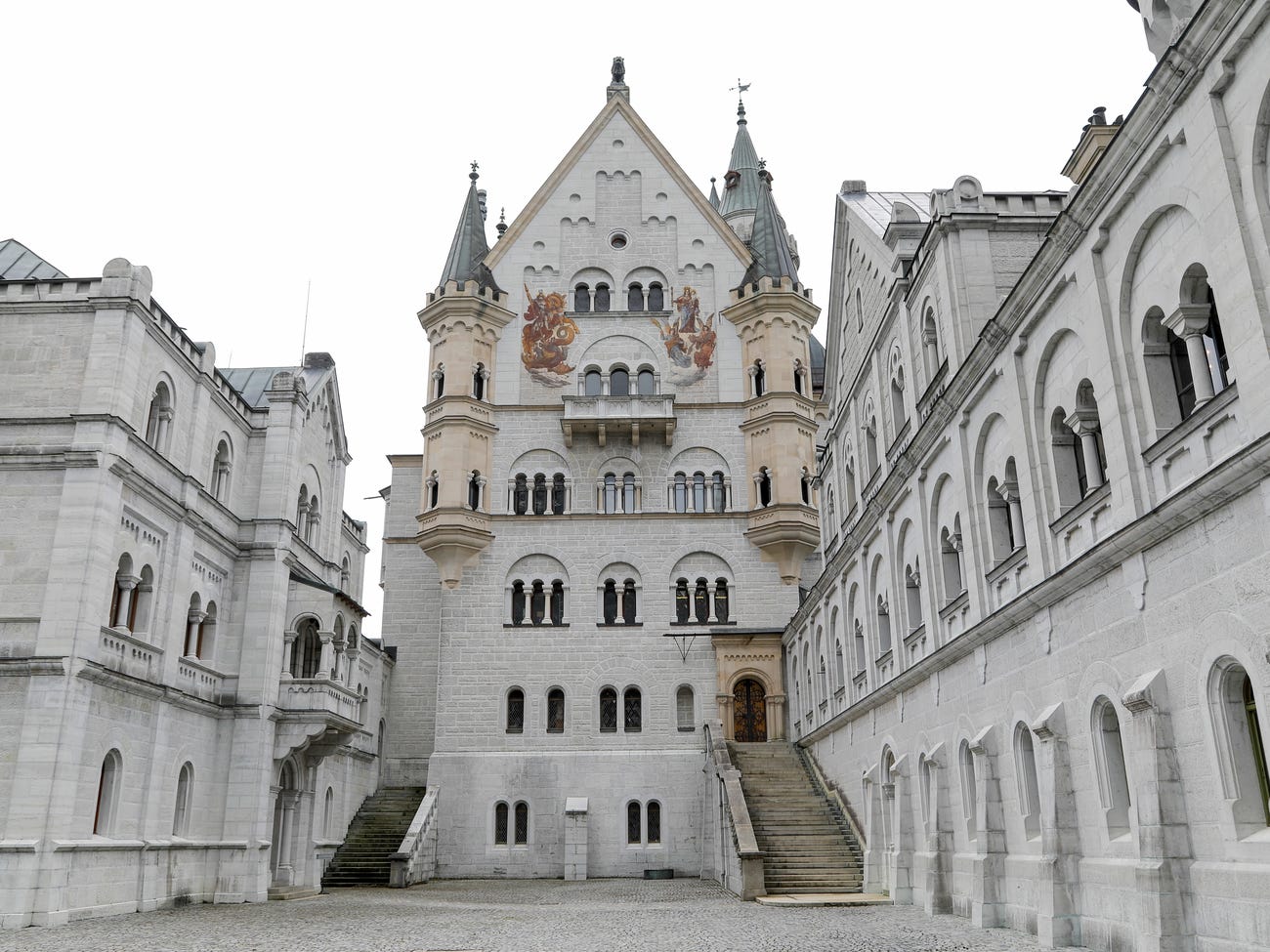 In 1886, just a few short weeks after moving in, King Ludwig II was found dead in a nearby lake. People speculated that it was suicide but others thought it was an assassination. Weeks later the castle was opened to the public, and it has become one of the most visited sites in Germany. 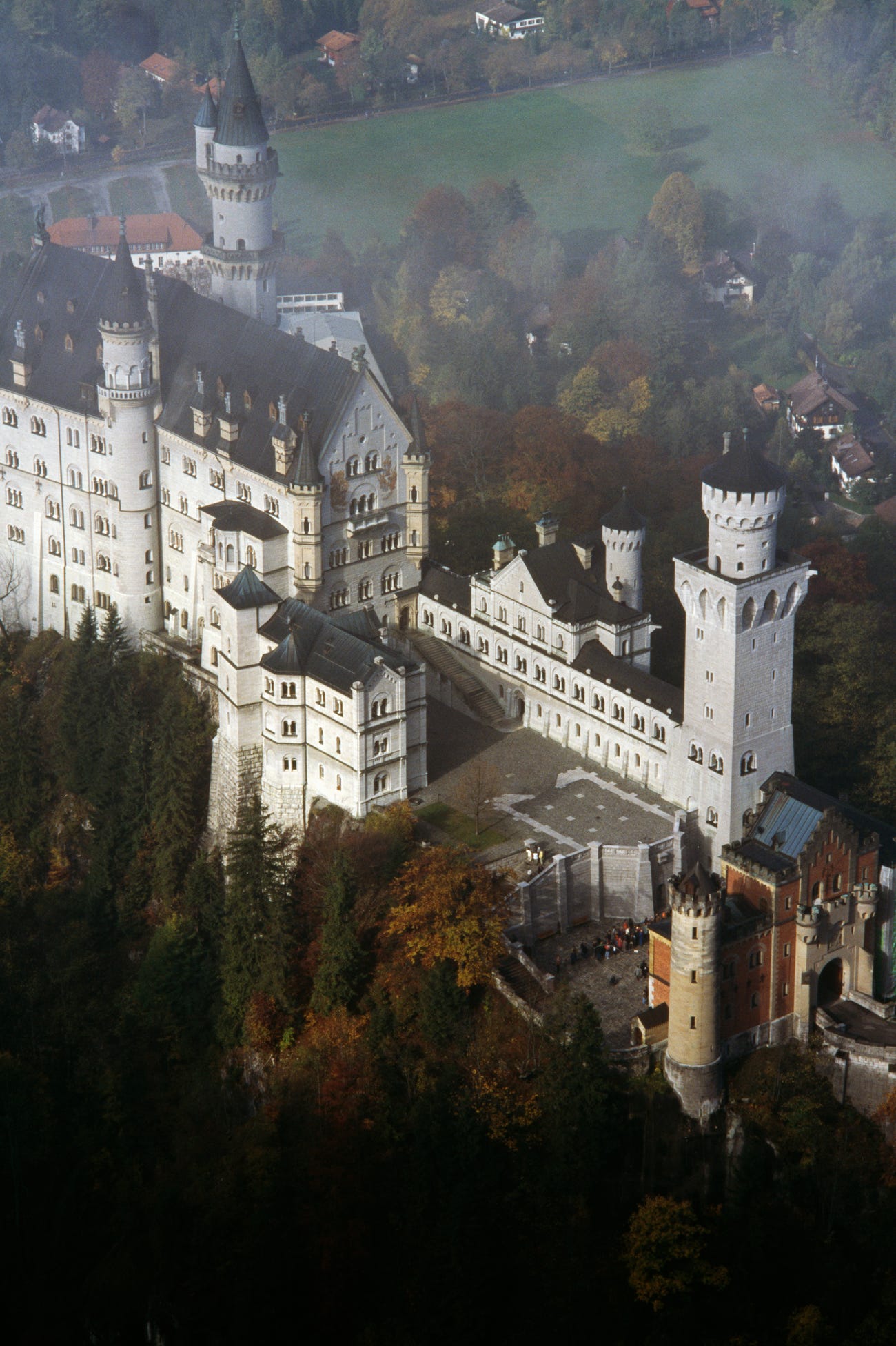 Before opening Disneyland in 1955, Walt Disney and his wife took a trip to Europe and visited Neuschwanstein Castle. It was here that Disney received his inspiration for the Sleeping Beauty Castle.

It’s easy to see how it inspired Disney. 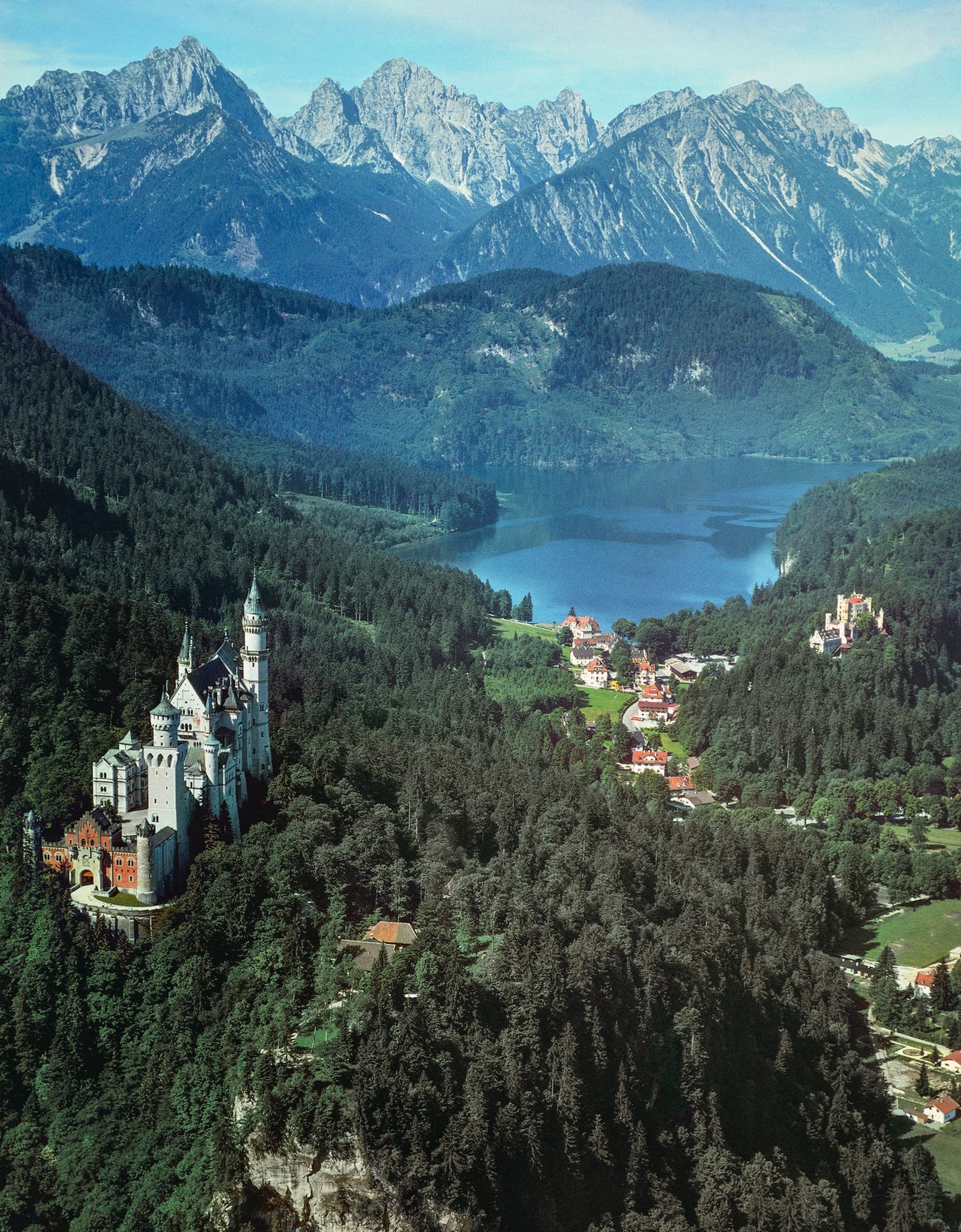 Neuschwanstein Castle has sweeping views of the German Alps.

King Ludwig even had Queen Mary’s Bridge built so that the castle’s beauty could be admired from afar. 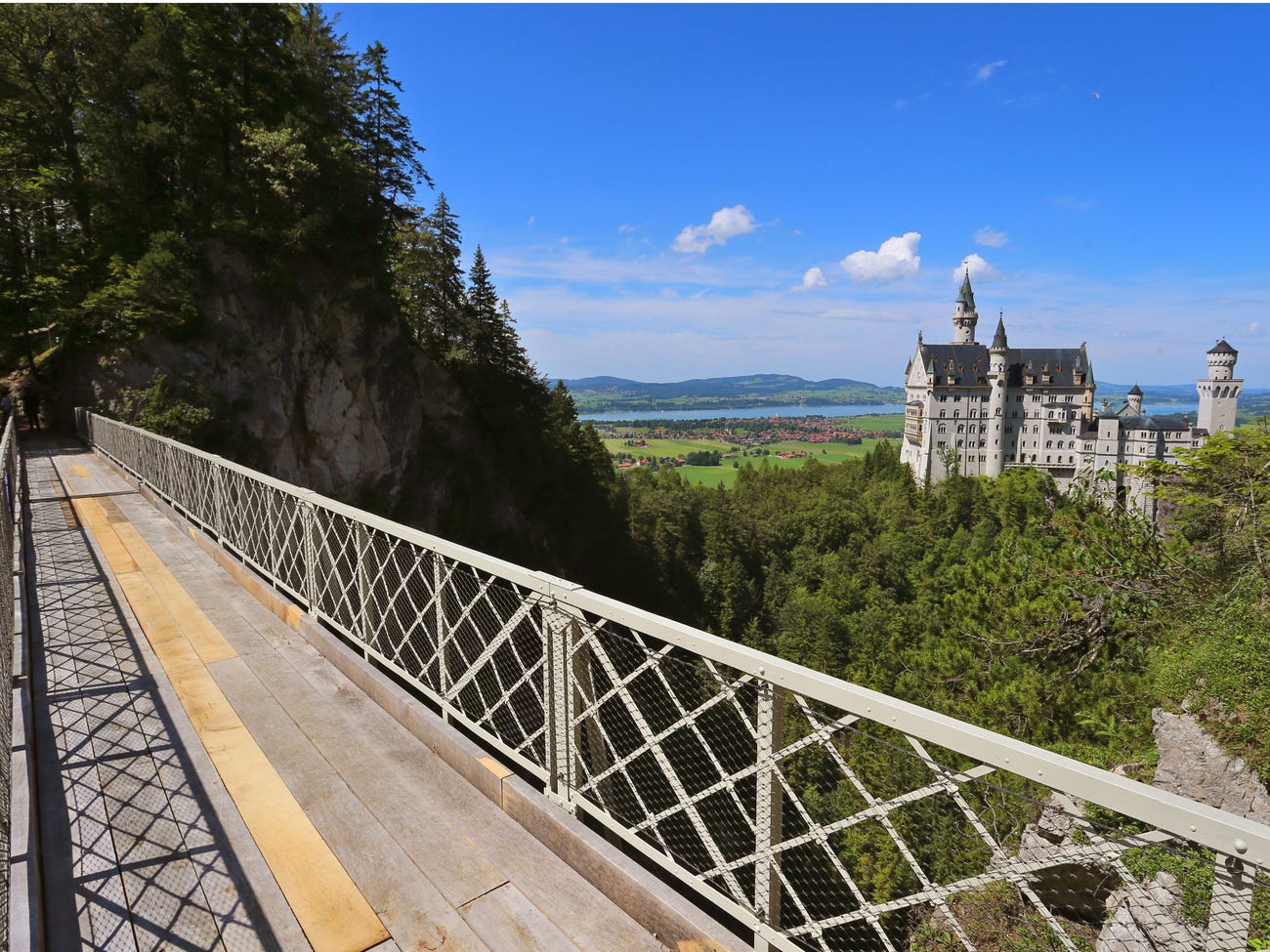 The narrow bridge in the back of the castle was dedicated to King Ludwig’s mother.

But it’s not just the exterior that is gorgeous: the inside is too. 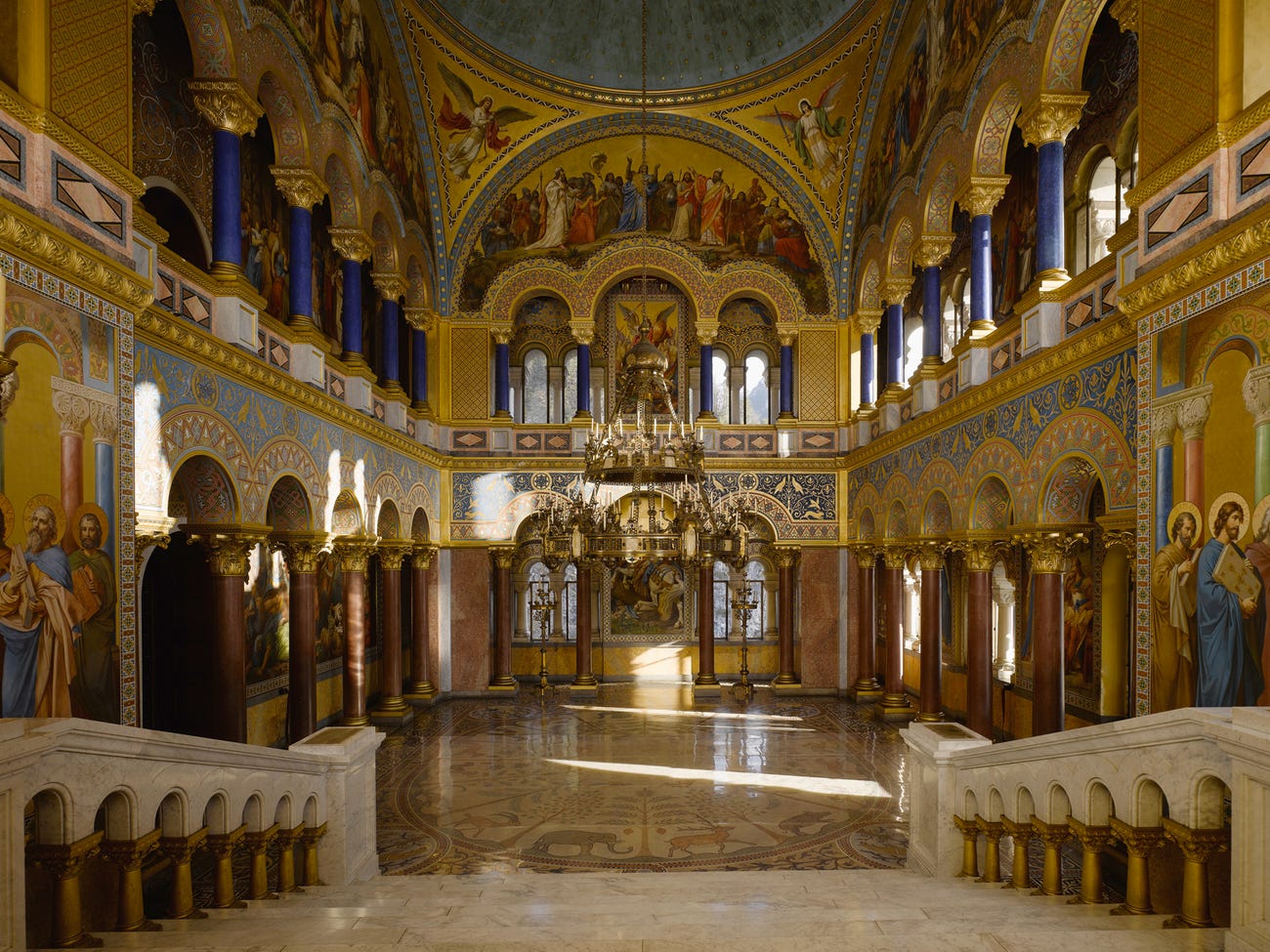 The second floor of the castle remained empty after Ludwig’s death because he was not able to complete his dream project. But the throne room still sits in the west part of the castle and occupies both the third and fourth floors. The king designed the room to resemble Byzantine churches, including a 13-foot chandelier that hangs in the center of the room. An altar was meant to be built in the room, but the plan was abandoned after King Ludwig’s untimely death.

Since the castle was not designed as a palace but as an escape, Ludwig decorated it whimsically, as if it was the setting of a dream. 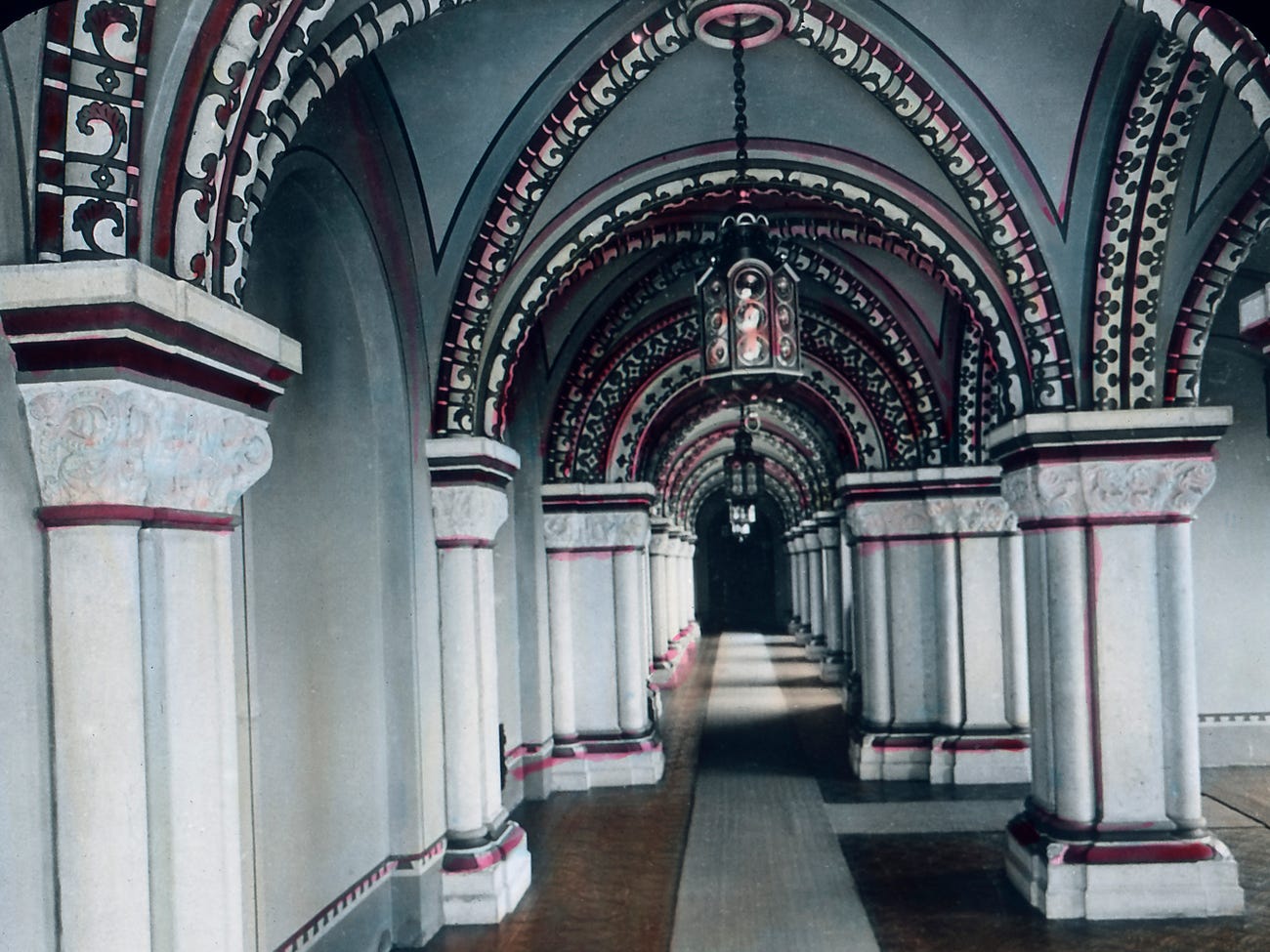 Every room, hallway, and crevice was covered in King Ludwig’s favorite art, poetry, and writing. The Bavarian Palace Department wrote that the decor in the castle deals “with love and guilt, repentance and salvation, kings and knights, poets and lovers.”

The dining room is located on the third floor and is a great example of the castle’s artistic decor. 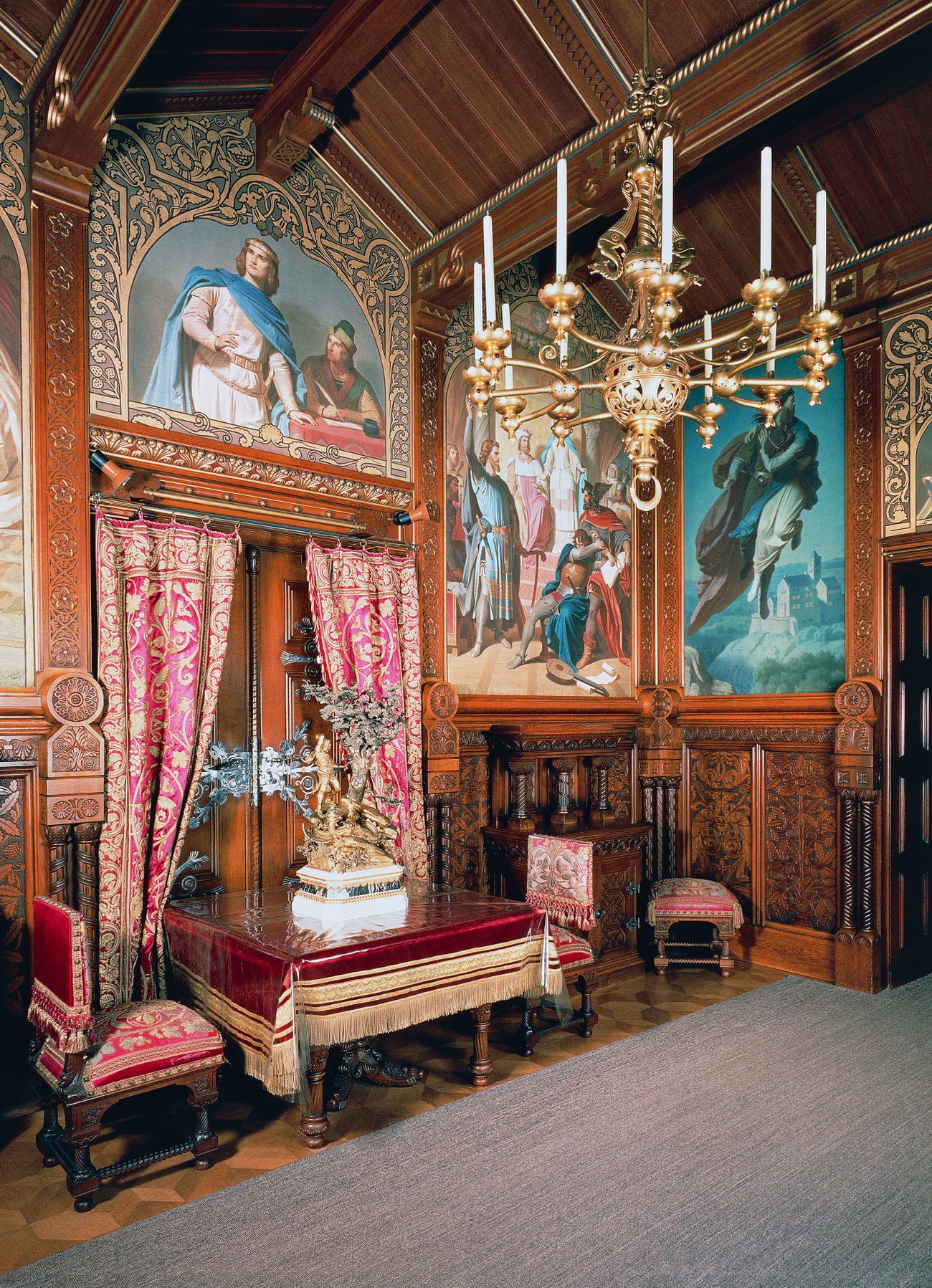 The wood-paneled dining room is one of the grandest rooms in King Ludwig’s apartment on the third floor. The art on the wall depicts famous poets from the 12th and 14th centuries. The sculpture on the table is made of bronze and metal and shows German hero Siegfried fighting a dragon. Additionally, all of the drapery in the room is made of silk and gold.

But King Ludwig’s bedroom is even more elaborate. 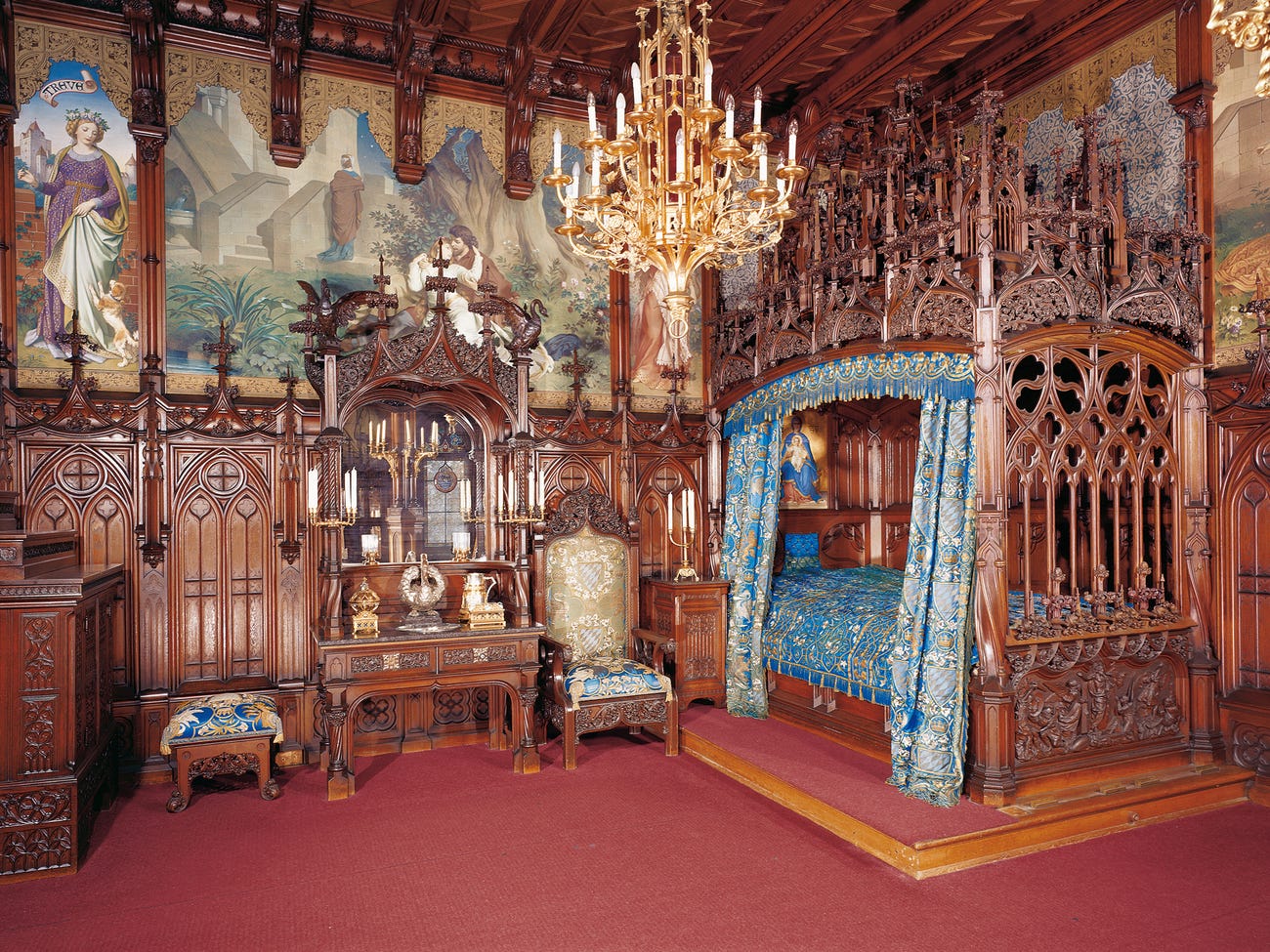 The bedroom actually pays homage to lovers Tristan and Isolde from composer Richard Wagner’s opera. In fact, their image can be seen in the mural on the far wall and in a carving on the door. There are even ceramic sculptures of the ill-fated lovers on the stove. But the eye is immediately drawn to the elaborate bed, which has a neo-gothic style and silk bedding.

The dressing room is yet another example of the prominence of art in the castle. 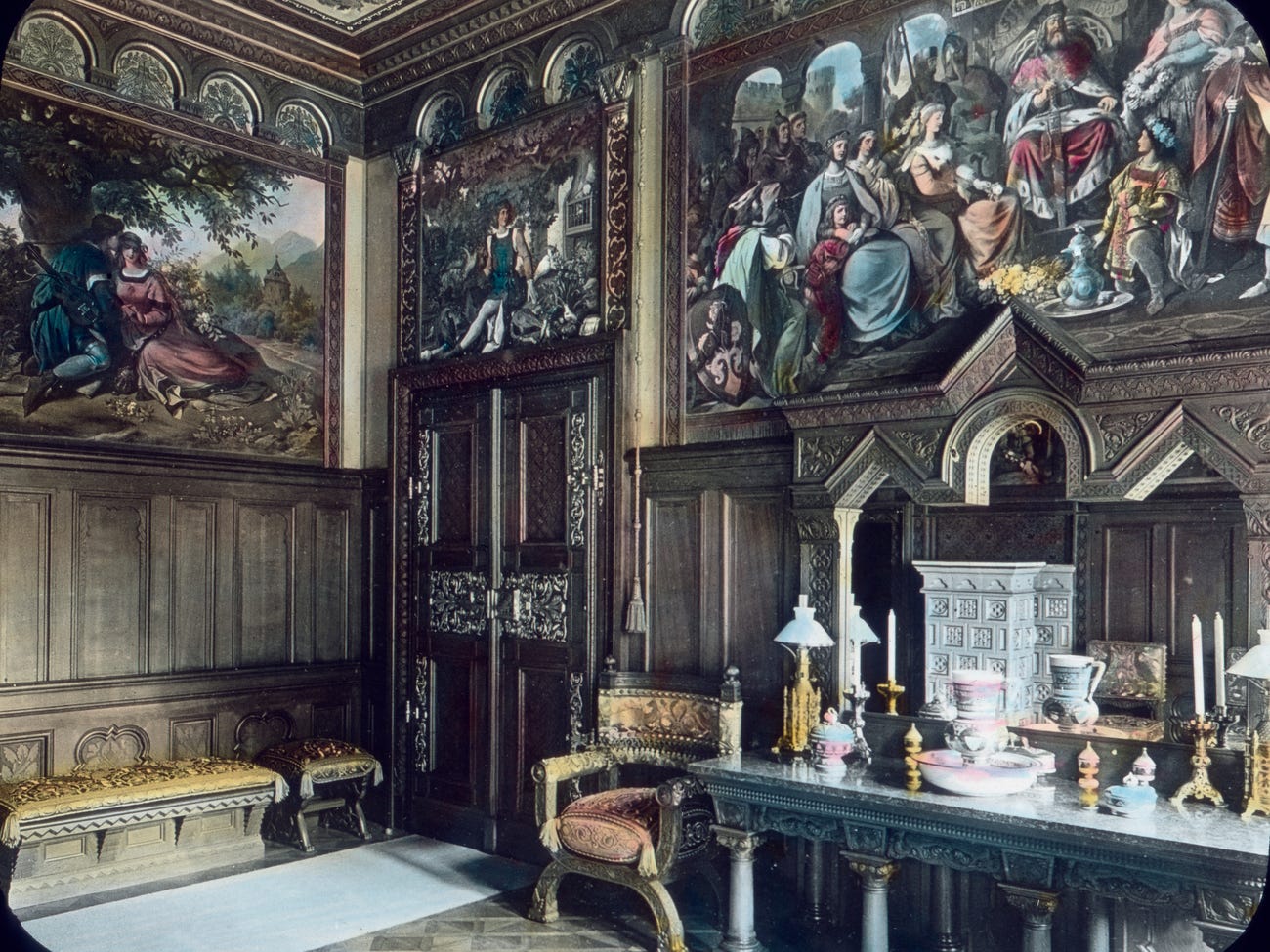 The painting on the upper parts of the wall are scenes from Walther von der Vogelweide and Hans Sachs’ poems.

The salon is an L-shaped room meant to be used for socializing. The salon was also decorated with murals that depicted scenes from poems.

But Singer’s Hall was King Ludwig’s favorite project in the entire castle — and considered the most important. 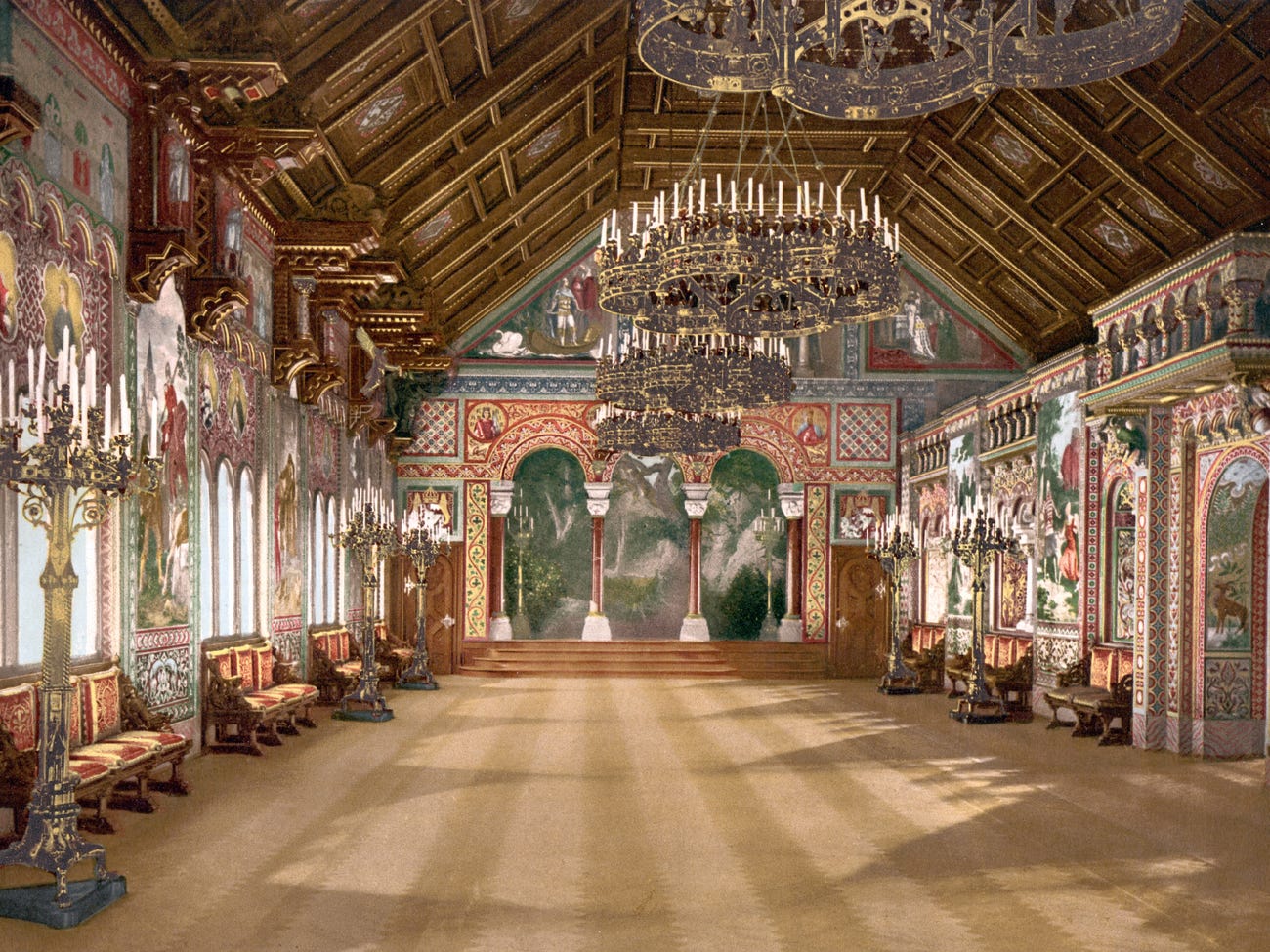 Singer’s Hall takes up the entire fourth floor on the east side of the castle. While it was meant to be used for banquets and parties, the room was never used. The stage at the back of the room is intricately painted with a forest scene that is similar to the trees that surround the castle.

The castle is just as stunning in the winter as it is in the summer or spring. 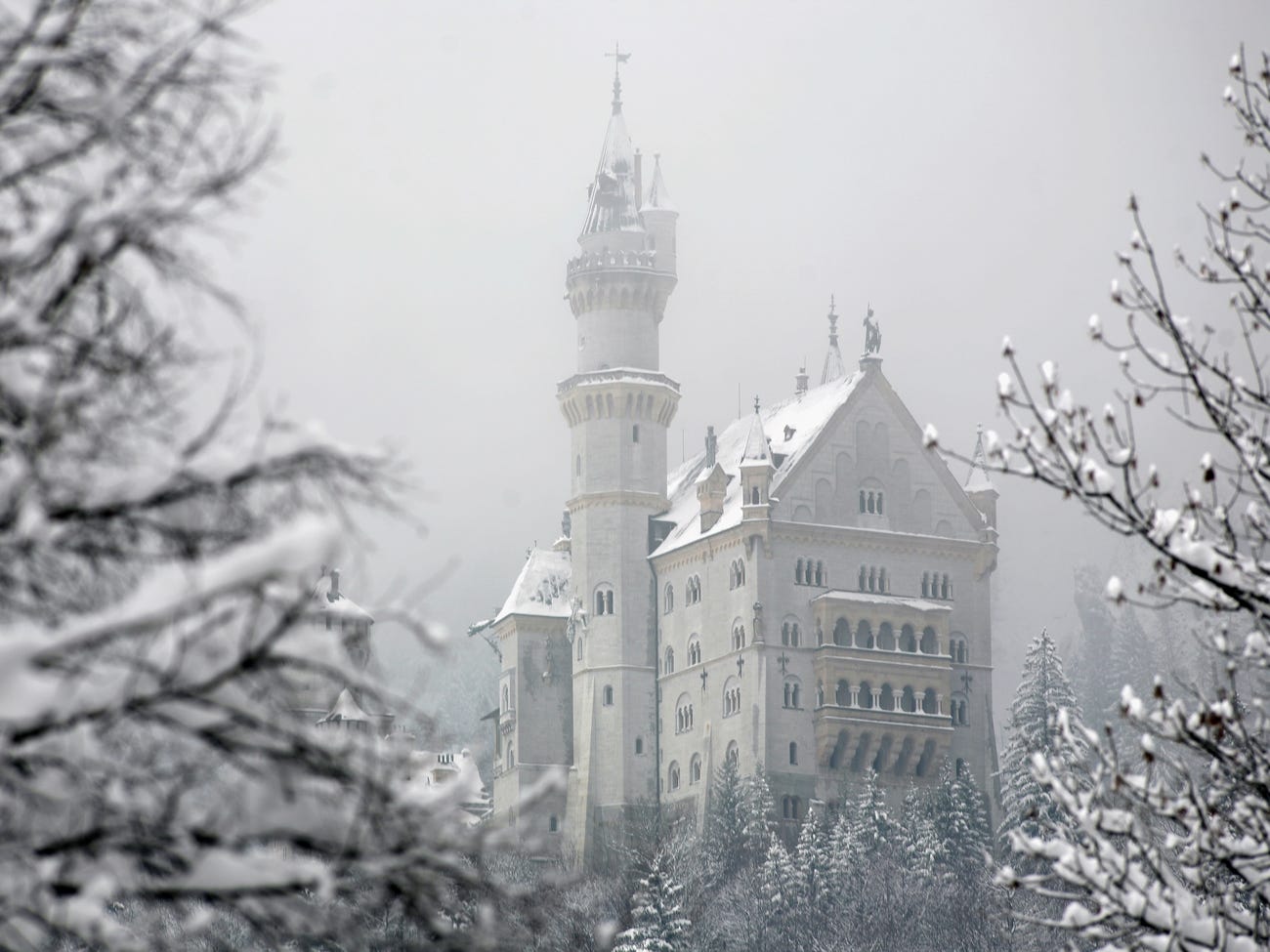 Although the castle is difficult to get to during the winter, the trip is worth it, especially as lines are shorter than in the summer, which is peak season.

But the scenery is stunning year-round. It’s a great time to visit the castle when the surrounding forest is changing colors. Autumn is also a perfect time to book a trip to Germany to coincide with Oktoberfest.

From the man known as the “Fairy Tale King” to the man who made fairy tales come to life, Neuschwanstein is worth a trip.