It’s fairly easy to get to this lake and getting to its best viewpoints, even easier.

In Upper Bavaria, the Isar Valley is home to one of the most captivating sights of the Karwendal Alps. It’s hard to believe that this area is man-made but it is a dam; although, with views such as these, it’s easy to imagine that a river such as this was just part of nature’s plan. With a road that spans the width of the lake, a car is necessary to reach this point but it’s worth finding transportation for. Around this man-made lake are hiking trails that offer even more breathtaking views of both the Karwendal Alps as well as the valleys in between, and during the summer, swimming and boating are popular activities.

In Germany, this is a destination that’s stunning all year-round and there’s no ‘perfect’ time to go because each season transforms this landscape into something new and magical. It’s arguably one of the most well-loved roads to travel in the country or, at least, near Munich.

How The Lake Was Formed 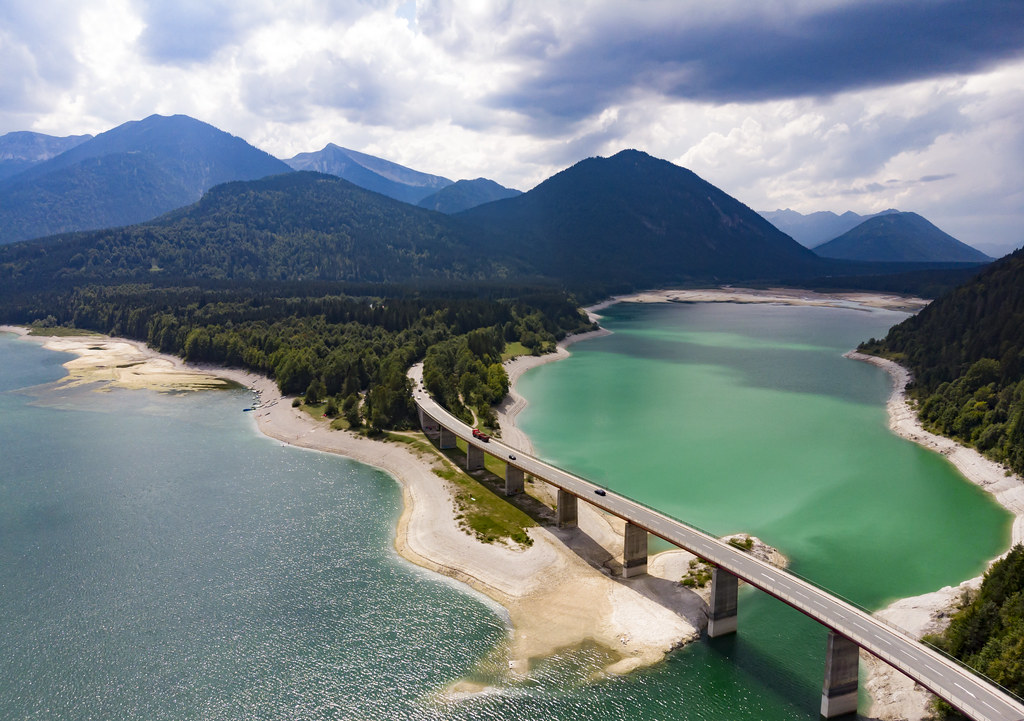 The idea for the dam was set in motion during the 1920s as hydropower plants were built in the upper river which led to an uneven balance of water flow during the dry season. In an effort to counteract this and restore balance, a reservoir was added, thus creating both the dam as well as the lake itself. The dam took nearly five years to built and was completed between the years 1954 and 1959. Luckily, the dam had a dual purpose – in 2005, it was responsible for keeping flooding to a minimum during the European floods. There’s no bad time to visit the lake (except perhaps during inclement weather). During the spring and summer months, the lake is a gorgeous turquoise and surrounded by lush greeneryas far as the eye can see, well into the surrounding mountains. During the fall, the changing colors of the leaves bring this entire area to life, surrounding it with beautiful hues of orange, red, and yellow. During the winter, the mountains seem to be twice their actual size and the snow-covered terrain is reminiscent of the upcoming holidays as well as a winter wonderland, complete with a frozen lake – it’s truly like a scene out of Disney’s Frozen.

There’s plenty to do around the lake for visitors although there are more activities during the months where there isn’t snow on the ground. For those seeking to hike the summits around the lake, there are options for all skill levels from novice to expert. No matter which trail a hiker chooses, they won’t be disappointed since there are views around every corner. Even just taking this scenic drive does the entire Karwendal Alps justice. The best part is that a hike isn’t even needed to appreciate the beauty of this lake and its surrounding mountain range – simply park, get out, and walk! There’s plenty of space to explore at the water’s edge as well as the surrounding ledge that’s at bridge-level, but visitors do have the option to walk up to the viewpoint. To the right of the bridge near the parking area is a small path that visitors can take for a brief mini-hike, and it’s barely even a hike.

While it does change a bit in altitude (in order to gain height from which to take in the views), it’s just enough to keep your body working but short enough that it doesn’t feel like a strenuous mountain trek. The walk up to the viewpoint should only take about ten minutes and sometimes five if the weather is good and the ground is dry and manageable. During the winter months, it might take slightly longer due to snow accumulation, but it’s worth it during any season. This is a great alternative for those who don’t have time or don’t wish to go on a full hike.

Swimming is also an option during the summer months however, due to the altitude it’s likely that the lake will still be chilly. The water here is calm all year-round due to the fact that it is artificial and its shores lend themselves well to picnics and just lounging around. It’s also one of the quietest and least-crowded lakeside near Munich, offering some peace and quiet along with a day of lazy swimming or sunbathing. For those who don’t mind the generally colder waters, swimming here is a serene experience and one where visitors aren’t likely to be bothered. It’s nice to finish up the day with a hike or just taking in the surroundings, or settling down with a good book to enjoy the quiet.