Canada is mighty proud of its railways, which span the entire length of this enormous country. So much so that until recently an image of the Canadian (the country’s transcontinental passenger train) ploughing through the Rockies adorned its $10 bill.

This national pride is not misplaced: the Canadian, which has been running between Vancouver and Toronto since 1955, is considered by many to be among the best train journeys in the world. Here we take a deeper dive into what it’s like to ride this fabled line, and highlight a few of Canada’s other amazing long-distance train journeys. 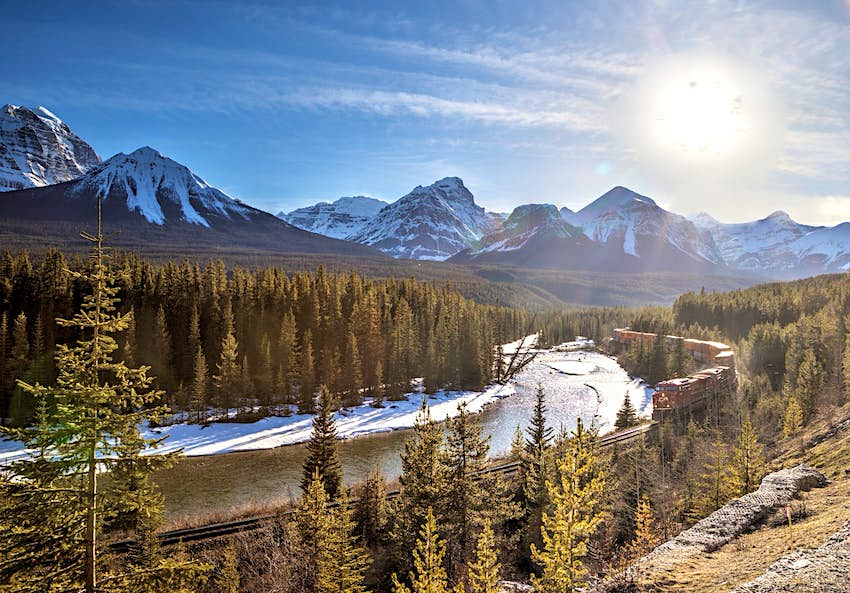 When the Canadian debuted in 1955 this flagship train was a prime example of railway style: stainless-steel carriages outfitted with art-deco furnishings, 360-degree observatory domes and spacious sleeping cars. Since then little has changed, and now it’s a bit dated in an appealing kind of way.

The train’s interiors, while regularly refurbished, maintain the cutting-edge fifties décor, and smartly-dressed crew members still announce dinner in person, rather than over the PA system. The train’s elegant restaurant offers up gourmet meals of anything from prime rib of beef to pan-roasted halibut, plus wines to drink while the train rocks and sways through the countryside.

The Canadian departs late on the Vancouver-to-Toronto leg, so travellers have to wait until the next morning to enjoy the scenery: flashes of green (the ubiquitous pine trees), mountain peaks (with the exception of Mt Robson – the Rockies’ highest peak, which, unfortunately, is usually in the clouds), dozens of river valleys and waterfalls, and animals like grazing elks and, with any luck, grizzly bear (train staff will announce sightings). 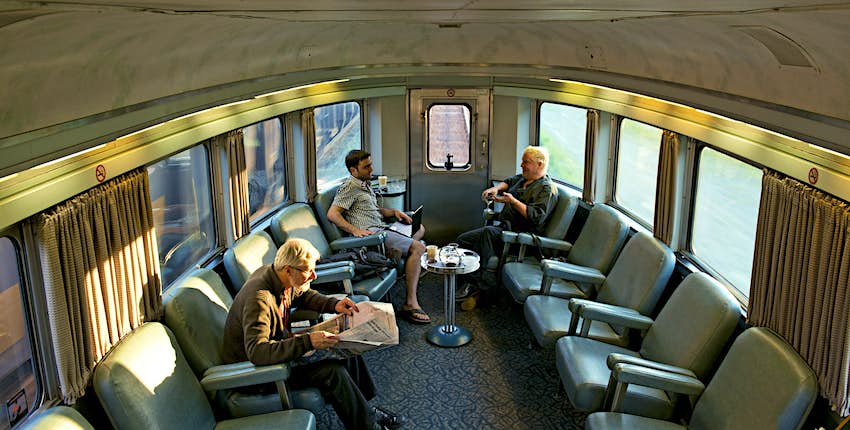 The train passes through Jasper National Park, Mount Robson Provincial Park and on to Jasper, where there’s a short ‘whistle stop’. The scenery from here on begins to change, with the train reaching vast prairie land that continues for miles – across Alberta, Saskatchewan and Manitoba, also known as the breadbasket of Canada. Yellow canola flowers, hemp and flax form massive carpets of colour. Wooden grain elevators stand like track sentinels – striking landmarks against the flat landscape where, locals joke, they can see a stray dog running away for three days. Finally, the train trundles into Toronto, where this mammoth overland odyssey ends.

This two-day, one-night journey runs along the St Lawrence Gulf to Nova Scotia’s eastern coast. Travelling west to east, evening falls just after the train leaves Quebec, and here, too, riders miss some of the scenery. Morning, however, reveals the beautiful Gulf of St Lawrence (a few are lucky enough to spot whales in the St Lawrence River).

From here it’s vista overload: from water (the train crosses the wide Miramichi River, famous for its Atlantic salmon); to the Sugarloaf Mountain, an ancient volcano; then on to quaint Acadian communities that fly blue and red flags. And speaking of colours, fall is a stunning time to do this trip: the leaves turn into rich reds, golds and yellows. 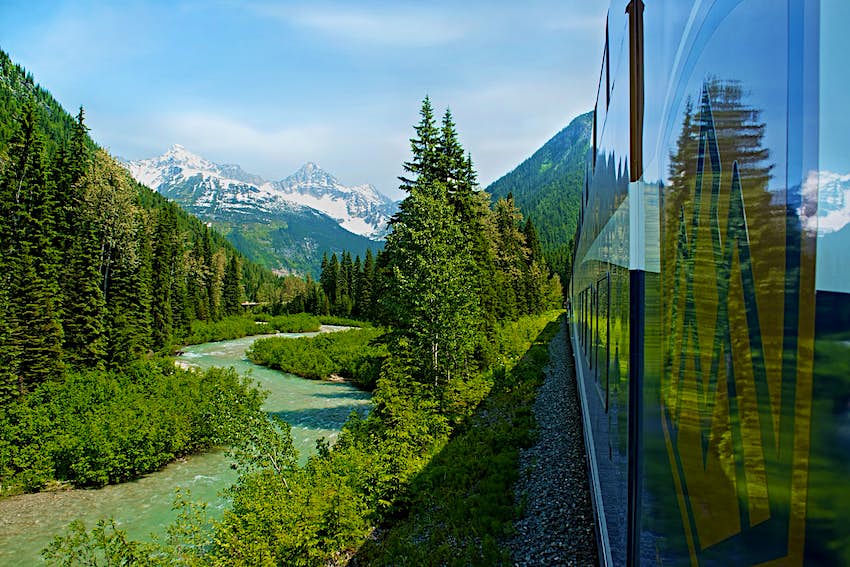 We’ll be upfront about this extraordinary two-day, two night journey from Winnipeg to the waters of the Hudson Bay: it is considered a ‘remote service journey’ for good reason. Once you are north of the tiny town of Gillam, there is no road or plane access. The train is an essential lifeline for the First Nations people whose communities are accessible to the route. This means that along this section, anyone can come up to the track along the route, hold up their hand and the driver is obliged to stop and let them on and off. (Oh, the only stipulation? Canoes cannot be over 18 feet long.)

From here, the landscape gradually morphs into tundra: an expansive, treeless, flat muskeg (Algonquin word for bog). It’s slow going here – the train track dips and shifts because of an extraordinary 12 metres of permafrost that thaws and freezes repetitively. As for those strange white poles in the landscape? They’re tripods supporting communication posts. If you’re lucky, you might spot herds of caribou and, closer to Churchill, polar bears. And there’s more: keep your blinds up at night – this is the place to be dazzled by the Aurora Borealis (Northern Lights).

Canada’s famously scenic railway lines lure travellers from around the world. But while you’ll find yourself swarmed by international visitors on some routes, VIA Rail’s charming two-day Jasper-to-Prince-Rupert service combines stunning backcountry scenery with plenty of chances to meet the northern British Columbia locals, who use the three-times-a-week trundle as a regular link between the area’s remote communities.

Add the excitement of wildlife-spotting opportunities plus vintage steel-sided carriages that echo the golden age of streamlined travel, and this train – fondly nicknamed the Rupert Rocker – becomes one of Canada’s greatest rail journeys. 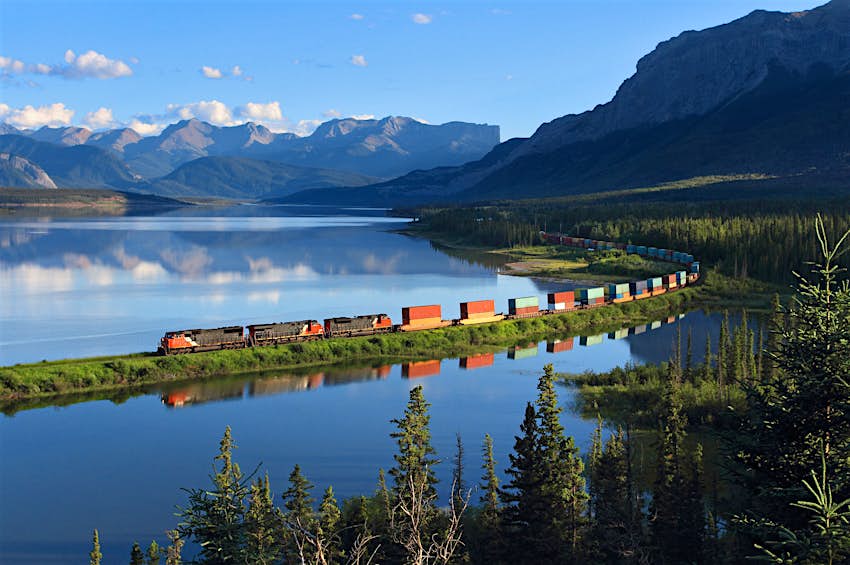 Onboard tips for a more comfortable trip

5 Things To Do In Alberta, Canada