Erikas Plucas came home one day to the most unexpected sight – a baby moose lying all alone just outside his gate. She couldn’t have been more than 2 weeks old.

“The first sight of her was heartbreaking,” Plucas, who lives in Lithuania, told The Dodo. “She was starved, dirty, sad, her fur was infested with flies, and she was so terrified of me when she first saw me but was too weak to run away, to even get up.” 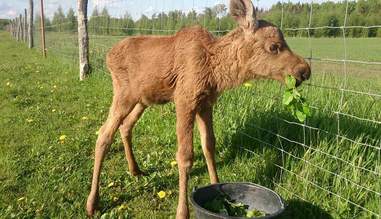 Plucas assumed the baby moose’s mother had probably been shot by hunters and that she’d run off in search of someone who could help her. He quickly carried the skinny, sick moose inside to figure out what he could do.

After contacting animal services, Plucas called some of his friends to ask for advice, but everyone told him he should just stay out of it.

“I was met with hostility and contempt,” Plucas said. “‘It is illegal, you should not do it, let nature take care of it’ was all I heard.” 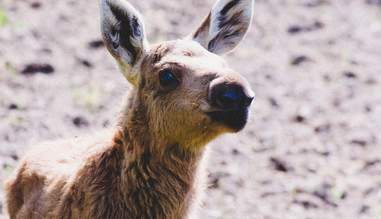 But he refused to listen to them. He knew he had to help her.

While he waited for animal services to arrive, he collected every kind of leaf he could find and got her some milk, and tried desperately to get her to eat. He knew if she didn’t, then she would likely die, and he just couldn’t let that happen. 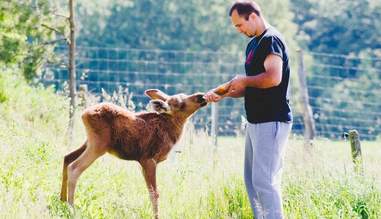 When animal services officers arrived the next day, there unfortunately wasn’t very much they could do.

“Since here in Lithuania we do not have a special institution who would take care of wild orphan animals, they called local hunters and asked if they can take her,” Plucas said. “I knew it meant certain death for her, so I insisted I should keep the baby, and they agreed.”

Plucas named the little moose Emma, and just like that, she was his. 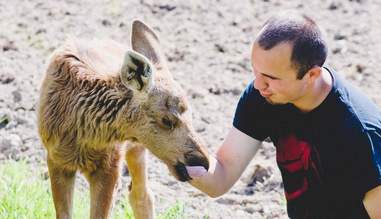 The first few weeks of caring for Emma were definitely a challenge. She had to be fed every four hours and would cry every time Plucas tried to go inside – and so often he slept next to her, sometimes outside and sometimes in his barn, just so she would always feel safe.

“She was afraid of everything but me,” Plucas said. 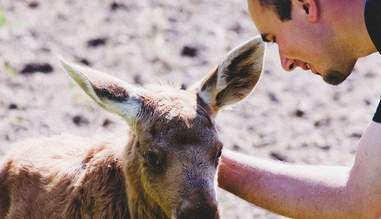 As Emma got bigger, Plucas began taking her for frequent walks in the forest in hopes of reintroducing her to the wild. He tried to teach her what was dangerous and what was safe, and helped her find food so that one day she could do it on her own. Emma was terrified of going into the forest at first, but she loved Plucas and followed him everywhere he went, and so she did it for him. 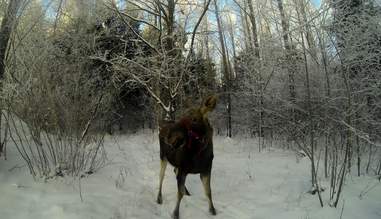 The older Emma got, the more comfortable she became with going into the forest, and soon she even started going there on her own. Soon enough, it was finally time for her to live there full-time. She was ready. 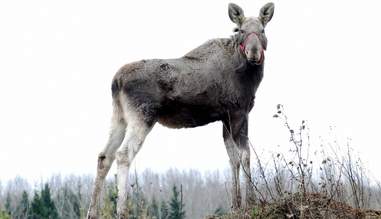 “I remember those first nights that she didn’t come home,” Plucas said. “Oh, I barely slept. But she grew up, I had to get over it. After all, it was my goal from the very beginning.”

Even though Emma is all grown up and living back in the wild now, she still comes back to visit her dad and spend time with him every single day. They go swimming together and he gives her treats, and she shows how grateful she is to him for saving her life. 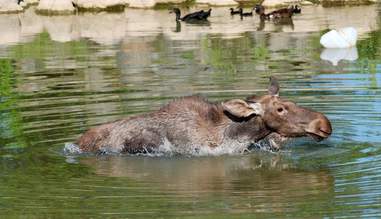 Emma never really warmed up to any other humans except her dad, and it’s clear just how much she loves him. 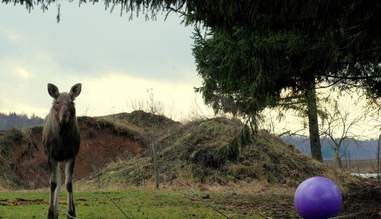 “To me she is gentle and loving,” Plucas said. “She is very careful when we are playing, so she would not hurt me.” 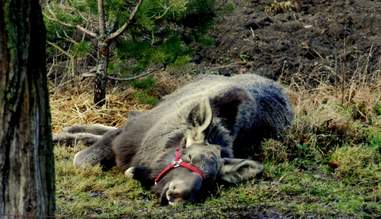 Plucas still worries that Emma might fall victim to some of the hunters in the area, just like her mother likely did, and so he spoke to all the hunters he could find to beg them not to hurt her.

“I had some hunters over for them to see her as not just a nice, warm steak with potatoes and vegetables on the table, but as a very intelligent and loving animal,” Plucas said. “Some claimed they will put down hunting rifles for good, and some promised never to shoot a moose again.” 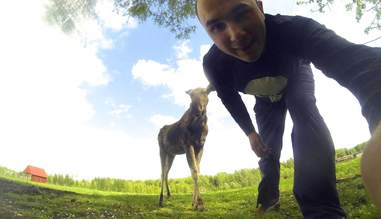 Emma is thriving in her new home in the wild, and will hopefully be happy and protected for a long time thanks to her dad. She’ll still always come home to see him, and soon she might have even more reason to visit – Plucas thinks she might be pregnant. 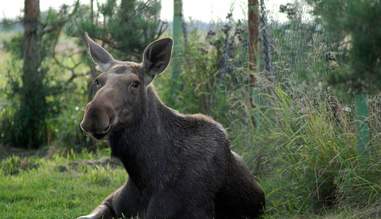 “I’m her world now and she is mine,” Plucas said. “Sometimes I wonder was it me who saved her, or is it the other way around?”