If you want to make a Portuguese person drool, show them a cake. A Portuguese one, of course. To the uninitiated, they might not look that special but trust me, and those who love them, there’s more to Portuguese cakes and desserts than meets the eye.

Little attempt is made to pretty them up so unlike the beautiful colourful displays in French bakeries, or fancy celebratory cakes in Portugal, individual cakes and everyday desserts tend to look rather brown and dull.

Don’t be fooled, Portuguese cakes usually taste much better than they look, as is true for a lot of Portuguese food.

Many of the recipes for the nation’s favourite sweet treats originated in Portugal’s convents and monasteries.

Eggs, especially the yolks, feature heavily. The egg whites were used to starch clothes and preserve wine so the yolks ended up in cakes and puddings.

Along with plenty of sugar.

Almonds are another popular ingredient although each region specialises in incorporating local produce into their cakes whether that’s beans, cheese, carob or chestnuts.

These iconic custard tarts are one such example of the sweet treats that originated in a monastery.

The original recipe from Jerónimos Monastery in Lisbon was sold to a local bakery and they own the rights to the secret recipe and the name Pastel de Belém. All other versions are called pastel de nata but they taste just as good when freshly baked and still warm.

You can learn how to make them at home on a pastel de nata workshop in an authentic Lisbon bakery or just sample as many as possible during your time in Portugal. 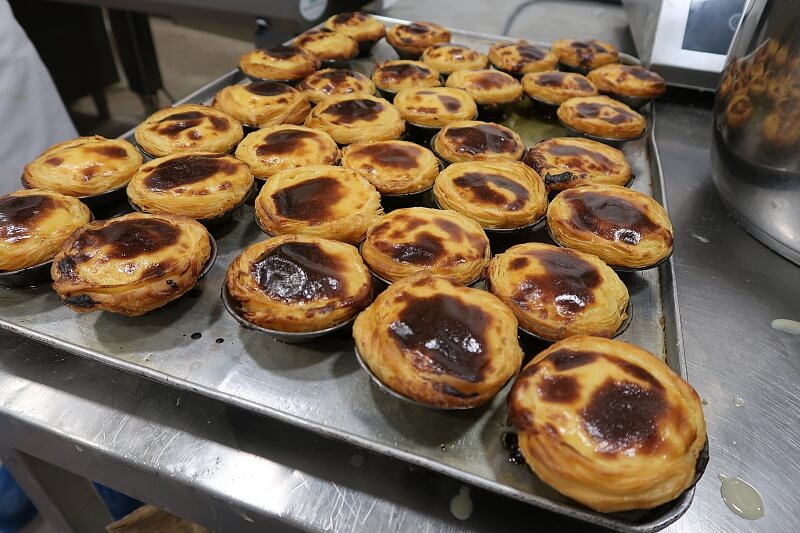 This convent cake from Central Portugal involves a sweet almond and egg filling wrapped inside incredibly fine filo pastry. I was lucky enough to watch the mesmerising process of filo pastry-making at a Tentúgal bakery. 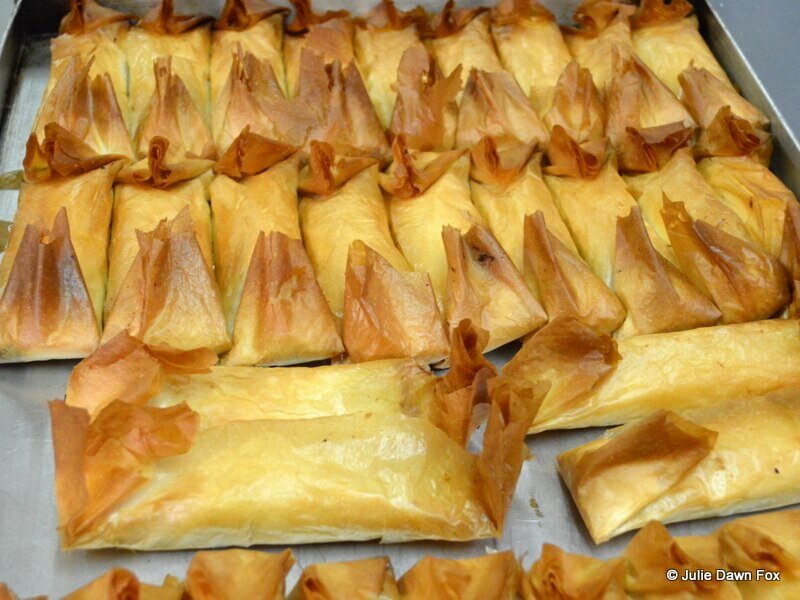 Toucinho do Céu translates as Bacon from Heaven. It’s not actually bacony but it is heavenly. The name stems from the substitution of butter for lard, coupled with the fact that nuns invented the recipe.

Surprisingly moist and decidedly yummy, this one contains almonds as well as the staples of flour, eggs, sugar and cinnamon, although you can use butter instead of lard when cooking at home. 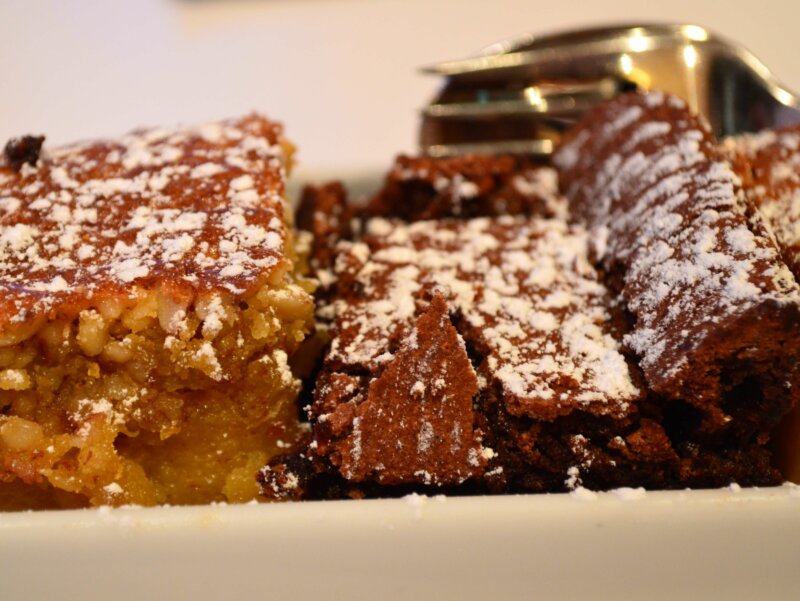 The one one the left is Toucinho do Ceu

Pão de ló is a perfect example of a boring-looking cake that’s surprisingly good, especially considering it has only 3 ingredients. It just goes to show what you can achieve with eggs, flour and sugar.

Pão de ló from Ovar in Central Portugal is an incredibly soft sponge cake with a sweet, liquid filling, which explains why it’s sunk in the middle.

Tip: Pão de ló is a generic name for sponge cake and it doesn’t always have a gooey centre so check what you’re buying to avoid disappointment.

Loggia restaurant in Coimbra claims to serve the world’s best pão de ló but I haven’t tasted enough to agree or disagree with this claim! 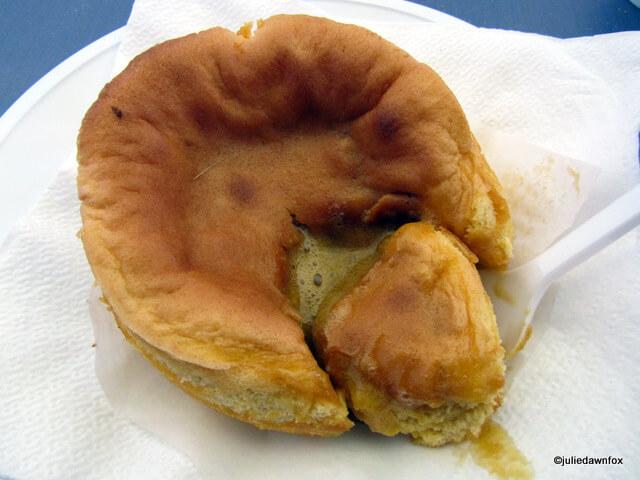 One the most popular Portuguese cakes is the Bola de Berlim. This is a fried sponge cake, a bit like a doughnut, filled with egg-yolk cream. I really wasn’t impressed with the first one I tasted – it was dry and disappointing after all the hype.

However, I have since been converted by the ones that people queue up to buy from Confeitaria Natário in Viana do Castelo and a larger, less sweet version I tried on a Porto food tour. 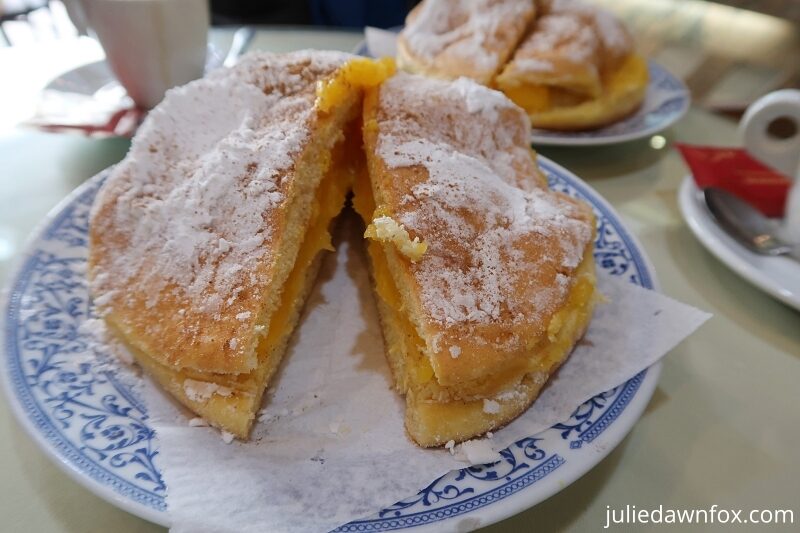 The Jesuíta is folded puff pastry with a thin layer of egg-yolk cream in the middle and a crispy cinnamon meringue topping. It can be a bit too dry for my tastes.

That said, Leitaria do Carmo in Viana do Castelo really do make the best ones I’ve tried. 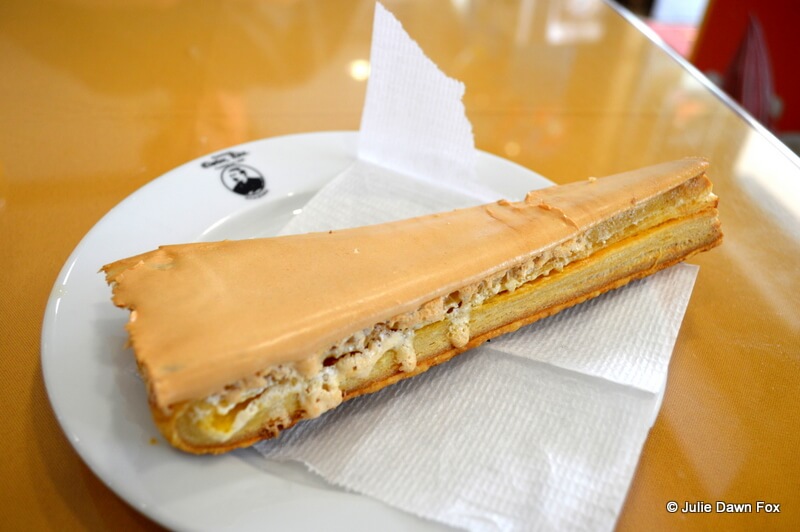 The tiny but pretty village of Azeitão near Lisbon is a foodie heaven. Not only does it give its name to a deliciously runny sheep’s cheese and produce wonderful wines, it’s also famous for some of Portugal’s best cakes, namely the torta de Azeitão. No prizes for guessing the ingredients as flour, sugar, eggs and cinnamon, with a hint of lemon.

This time, the super soft sponge cake is smothered with an eggy cream, sprinkled with cinnamon and rolled. 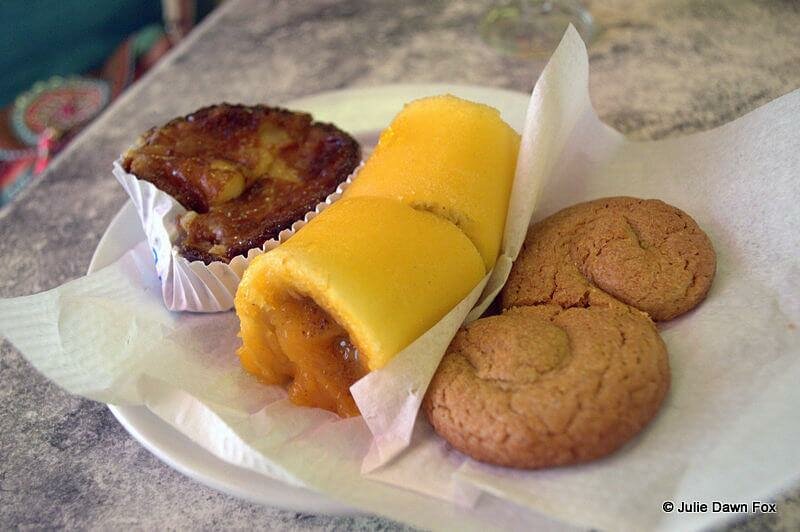 Charuta and Ovos Moles from Aveiro

Charuta is a long, thin cigar made of egg yolk and almonds wrapped in rice paper, sometimes coated in extra sugar, as if it wasn’t sweet enough already!

It’s a regional delicacy from the north of Portugal, especially Ponte de Lima and Arcos de Valdevez, where I bought these.

The same principle of egg and rice paper is applied in the canal-filled city of Aveiro. What differs here is the shape, which is typically a shell. 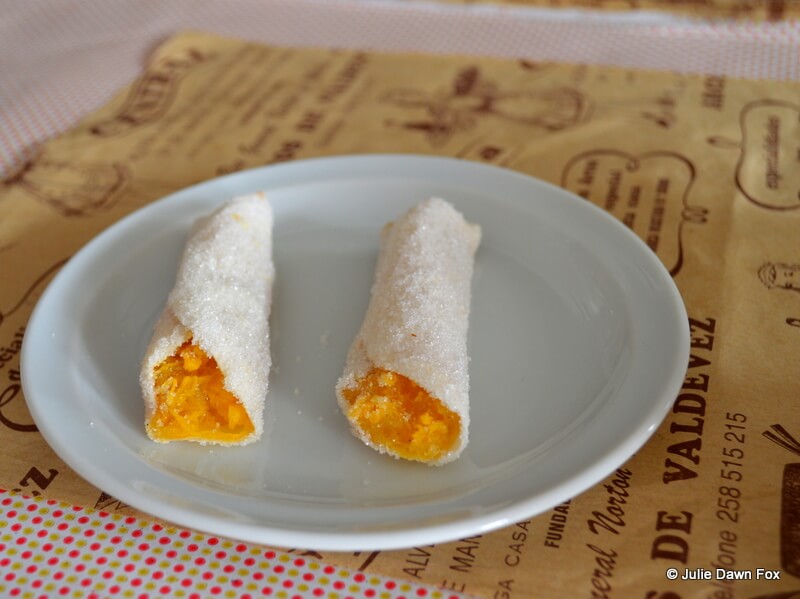 Queijo do figo from the Algarve

Fig cake, called queijo do figo because its shape resembles a typical Portuguese cheese, is one of my favourite Portuguese cakes.

These rich patties of fig, almonds, herbs, and maybe medronho (a spirit made from strawberry trees) are not as sweet as most of the eggy cakes and go very well with a glass of 10-year tawny port.

They are also very pretty to look at as they are decorated with almonds in flower and other patterns. You’ll find them in Algarve markets in the autumn and winter. 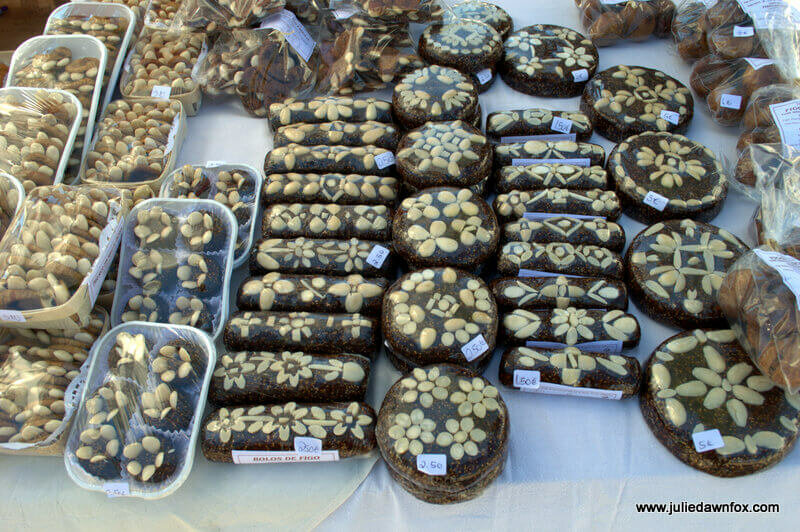 Bolo de mel is a deliciously rich cake from Madeira. The darkness and depth of flavour comes from the use of locally produced mel de cana, i.e. treacle or molasses.

The soft dense texture reminded me a little of rum truffles from the UK – never a bad thing! 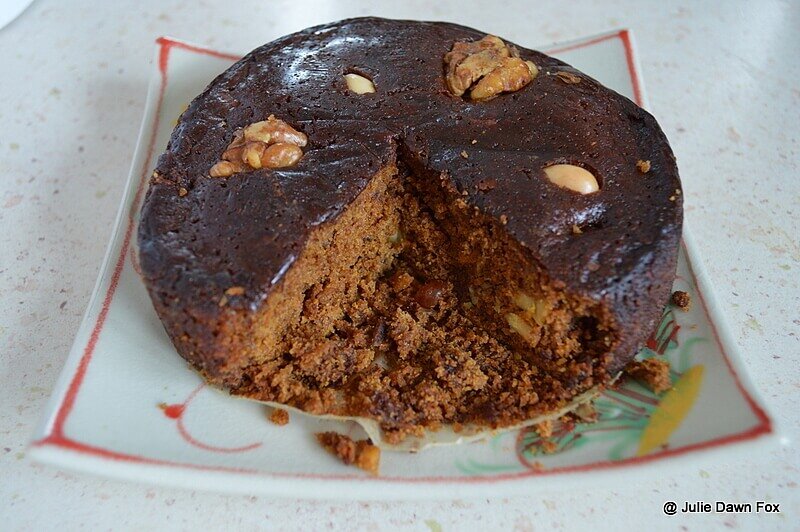 There are two versions of the round, fruit-rich cakes that you’ll see in every bakery in Portugal around Christmas time. The more colourful Bolo de Rei, or King’s cake, has candied fruit that represent the jewels in the king’s crown.

I prefer the more subtle colours and flavours of the Bolo da Rainha, Queen’s cake, which does away with the garish fruits and replaces them with nuts. 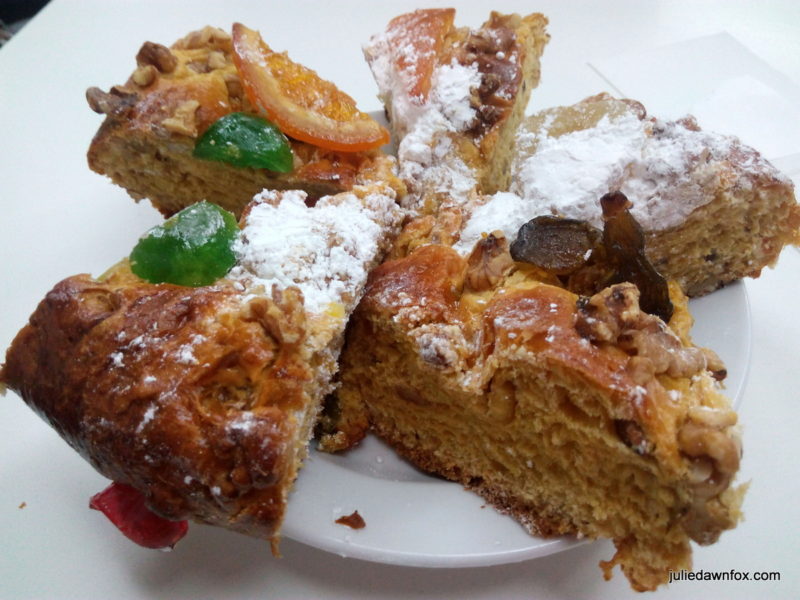 My favourite Portuguese dessert is probably the unassuming but oh, so good, pudim. The home made version of this baked egg pudding is usually delicious and served in a caramel sauce.

Tip: Check that it’s caseiro (home made) before ordering as the packet ones are less than impressive. 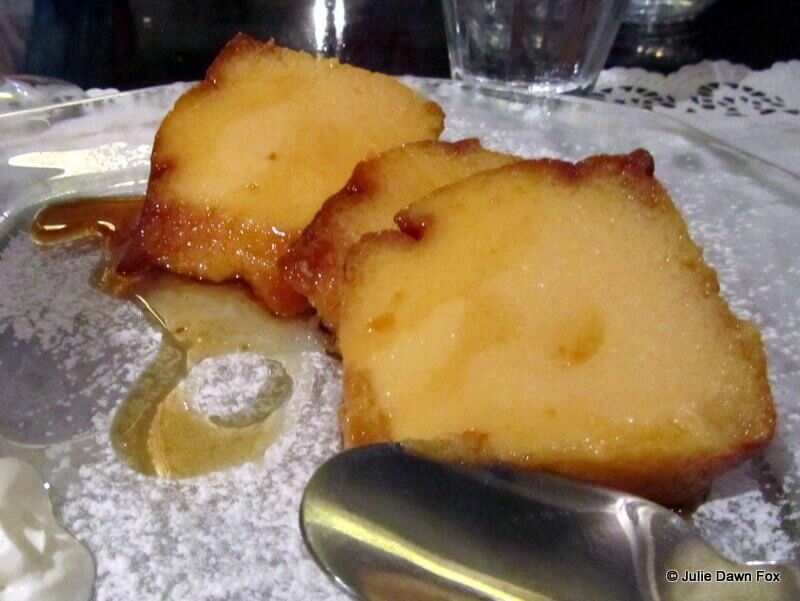 One of my favourite desserts is pudim, a simple, solid baked egg custard drizzled with caramel. It tastes much better than it looks.

Pudim Abade de Priscos is a variation on the theme which uses fatty bacon – don’t worry, you can’t taste it – to add a silky texture to the creme caramel pudding. It’s popular in Braga, the district it originated from.

Sericaia is an amazingly light sponge cake which, for the very sweet-toothed, is often served with preserved plums from the Alentejan town of Elvas. 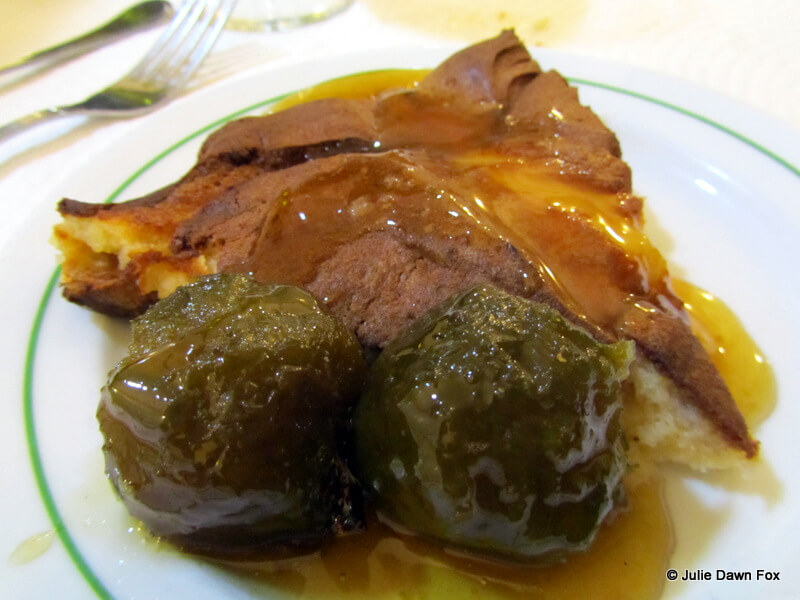 Preserved Elvas plums and a slice of sericaia sponge cake

Papa de milho is a moulded, grainy pudding made from corn. You can get sloppier versions of it, too, which remind me of semolina. Proper comfort food. 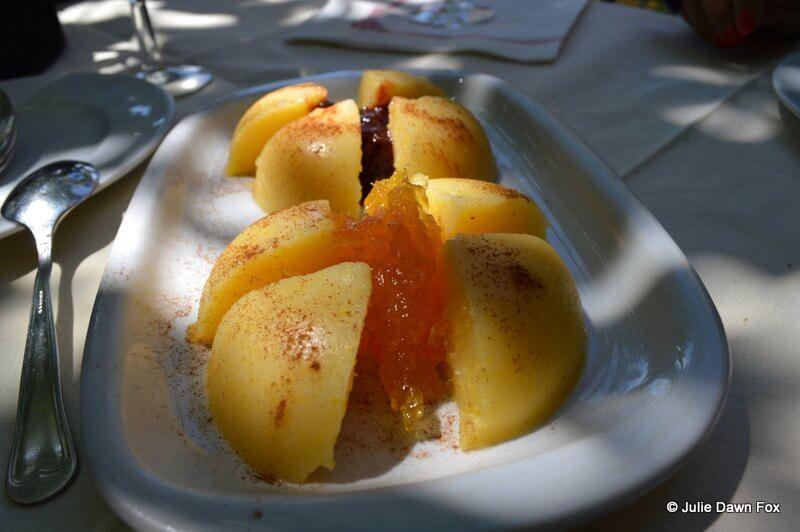 Unlike the rich, creamy hot dessert I grew up with, arroz doce is served cold! It also has a lighter flavour that’s more milky than creamy and sometimes infused with lemon, always decorated with cinnamon. 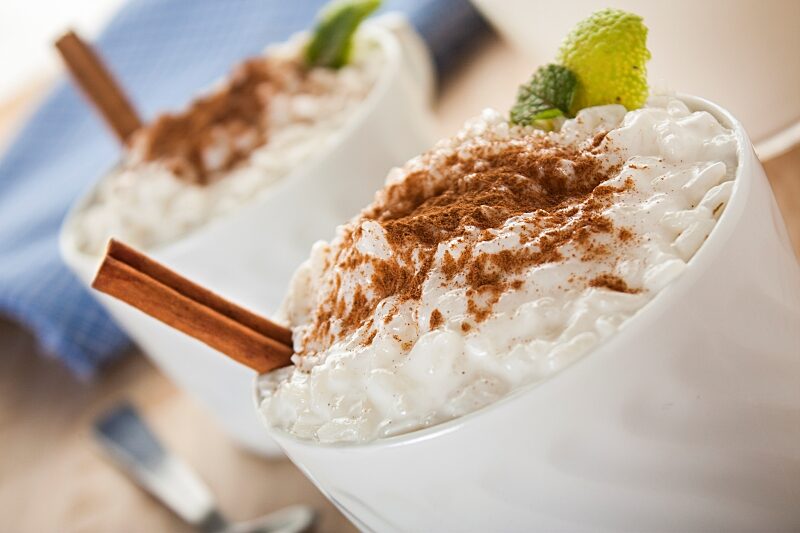 Pêras bebidas are one of the lighter Portuguese desserts. We’re talking whole pears cooked in port wine and sugar, which is relatively refreshing after a heavy meal. I learned how to make these on a Lisbon cooking class. 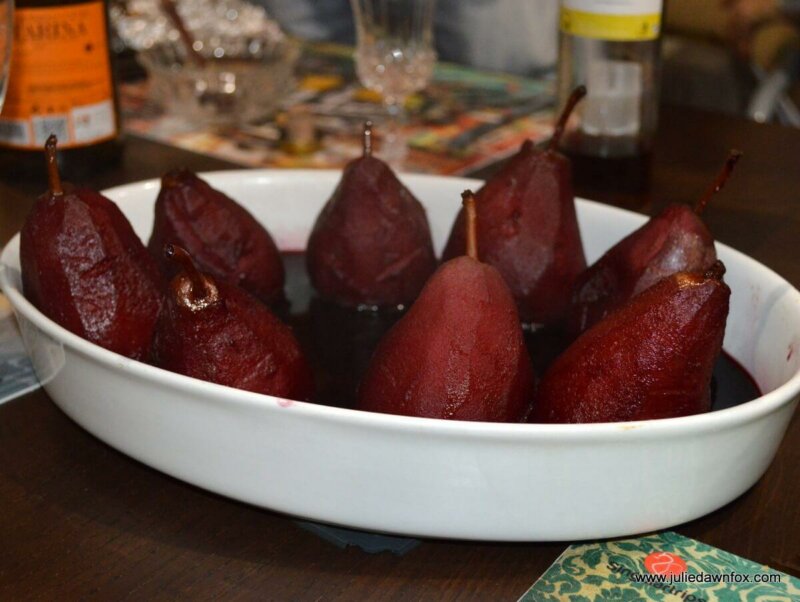