The 40-year-old elephant had gotten stuck in some mud — and no matter how hard he tried, he couldn’t get himself out.

Earlier this week, team members from Big Life Foundation, a wildlife conservation group, saw the elephant near an outpost they use to monitor wildlife and look out for illegal poaching activities in Kiboko, Kenya. They weren’t sure how the elephant had gotten stuck in the mud, but they suspected he’d been trying to have a bath. 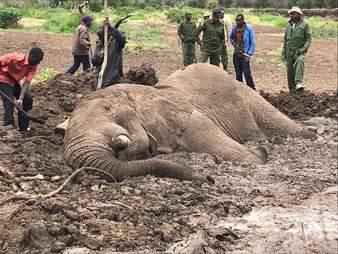 “Elephants of all ages will bathe in mud to coat their skin to protect it against the sun and as a form of insect repellent,” Rob Brandford, executive director of the David Sheldrick Wildlife Trust (DSWT), an organization that saves elephants in need, told The Dodo. 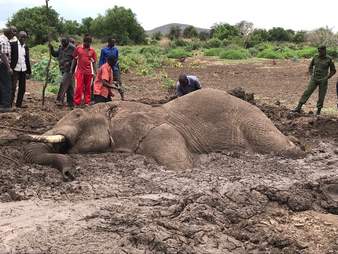 The team at Big Life Foundation knew they couldn’t help the elephant on their own — so they joined forces with the Kenya Wildlife Service (KWS) and DSWT, as well as the local community. Working together, they tried pulling the elephant out with the force of heavy vehicles — but it was extremely difficult. The mud formed a kind of glue around the elephant’s body, keeping him fixed in the mud. 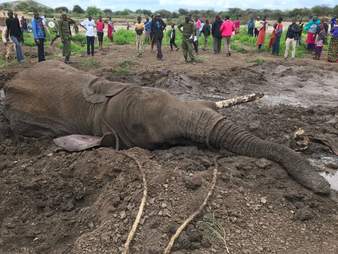 And the longer the elephant stayed in the mud, the greater danger he was in.

“The biggest issue is not being able to eat or drink, which is made worse by the animal’s efforts to extract itself, using up its energy and becoming weaker,” Brandford said. “Additionally this elephant was unable to get into the shade to stay cool, and neither could he use his ears for that purpose, being stuck as they were. Teams were able to create a makeshift water pipe from tubing to at least get some water into the elephant during the operation.” 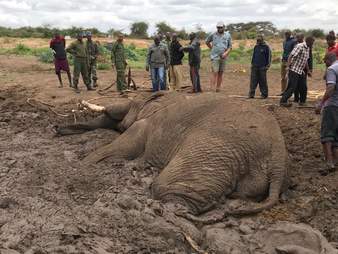 The team worked tirelessly to help the elephant, and at one point, they even pulled him out with two large trucks. But overnight, the elephant somehow managed to slip back into the mud and get stuck again.

After three days of trying, the team had almost started to lose hope. 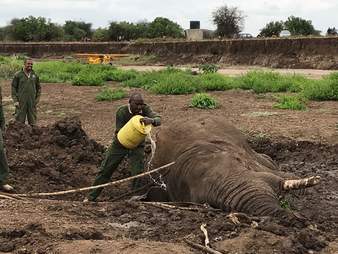 “By day three there were growing concerns, given the difficulty in getting vehicles into the right position to be able to pull him out without causing him injury,” Brandford said. “[There was] treacherous terrain, with vehicles constantly getting stuck. However, with those concerns came a growing resolve from all involved to succeed.” 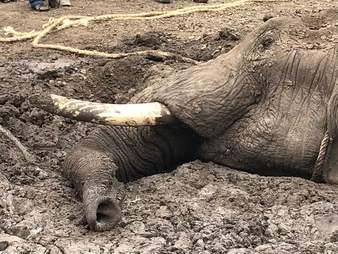 The team managed to pull the elephant out a second time by attaching his body to three Land Cruisers with heavy straps. This time, the elephant managed to stay on dry land once he was pulled out, although he seemed a little bewildered after the long rescue process. 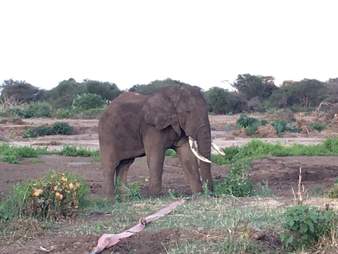 “At first he did little — he was exhausted from the ordeal and having been without food and in the sun for such a long period,” Brandford said. “However, with intravenous fluids provided by DSWT and administered by the KWS vet, he regained his strength and rose to his feet.”

The elephant was a bull, so he was traveling by himself and didn’t belong to a family or herd. However, the rangers at Big Life Foundation have since spotted him several miles from the rescue site, and they report that he’s doing really well. 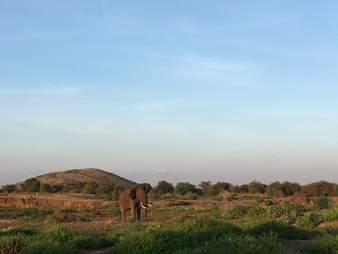 To Brandford, the most uplifting part of this rescue was simply “seeing him on his feet after three days.”

“It was anything but simple to get him in a position where that was possible, and there was certainly a delight and sense of achievement from all involved that the hard work and long days had paid off for this beautiful bull,” Brandford said.