Nail-biting footage shows a hungry wild lion eyeing up a car and its occupants in Kruger National Park in South Africa.

The lion sniffs around the car where a woman is sitting and appears to try and gnaw at the side mirror to try and get the car open.

In an adorable moment, the wild cat places his huge paws against the window and paws the glass as the occupants of the car laugh.

He tries the side mirror routine again before he begins to scrape the window making a toe-curling sound against the glass.

They then start the engine, giving the lion the precursor to moving away from the vehicle because they were worried that his sharp teeth would damage the wheels. 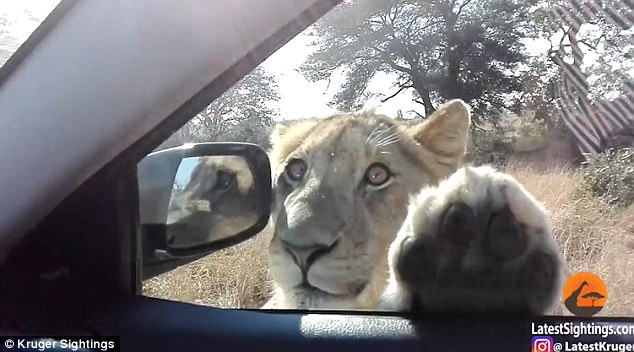 Hang in there, kitty! The lion was spotted a Kruger National Park by a car-load of bemused tourists 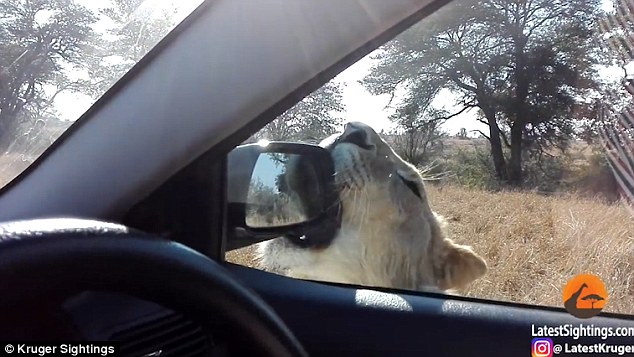 Tasty? The wild cat gnaws at the side mirror as he continues to try to get into the car. The park advises that while traveling around, windows should be kept closed

The video was posted on Latest Sightings by Hannetjie last August.

He wrote: ‘There was a sighting of a pride of 5 lions, but, this pride in Kruger is famous for ‘interacting’ with the cars.

‘There was a young male who was especially curious.

‘We were very excited and scared at first, but then we realized that lion was more curious and playful and was just merely investigating a strange object. 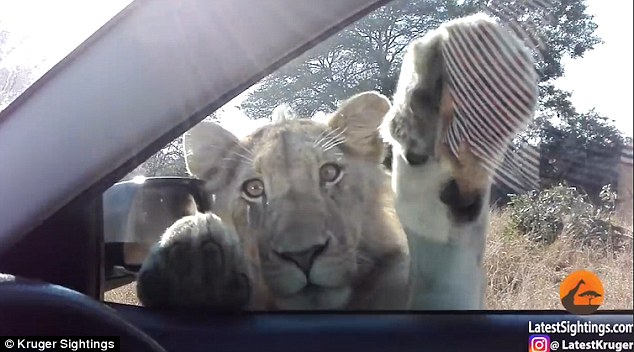 Let me in! He then starts to put his huge paws against the window and scratch his nails along it 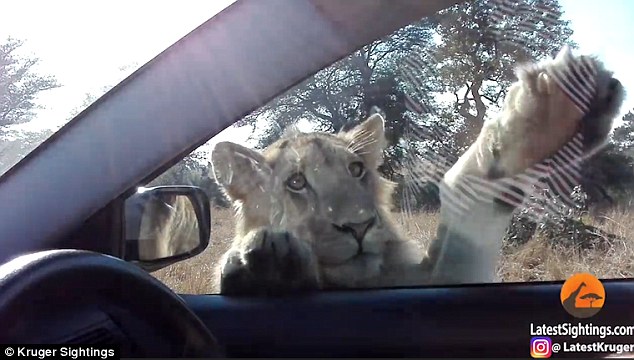 ‘In the park, tourists are allowed to drive with the windows open, and it is actually recommended since you can hear the sounds of the bush.

‘But… If you get to a lion sighting, where the lions are really close to the road, it is recommended to keep the windows closed, in case, well, this happens! This sighting could have ended quite differently if the windows were open.

Hannetjie commented: ‘Most of my 48 years of visiting the park, I have had to use binoculars and a lot of imagination to spot a lion, never ever had an encounter like this!’

By VICTORIA BELL FOR MAILONLINE