At just one week old and measuring three feet tall, she plods along between her mother’s legs on an estate in rural Bedfordshire.

After spending 22 months waiting in her mother’s womb, the little elephant began walking within minutes of her arrival.

The female calf is the newest resident to join Woburn Safari Park near Milton Keynes and is one of the few Asian elephants living in Britain. 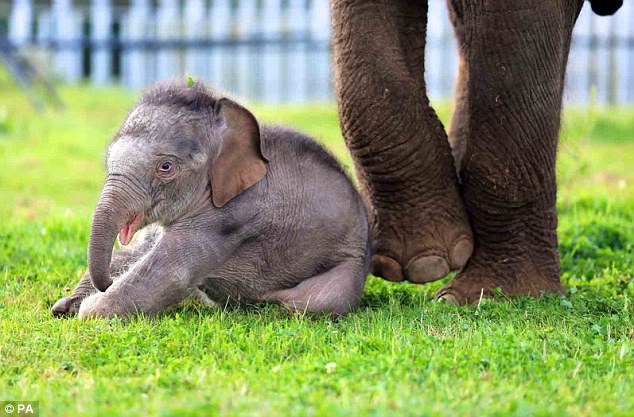 Leg up: The newborn elephant, which is yet to be named, is helped to its feet by its protective mother

Her parents, 20-year-old Damini and father Raja, also 20, live on the estate, owned by the Duke of Bedford, with a herd of five other elephants.

At 19 stone, she already weighs more than most adults but is expected to reach a weight of four tonnes and a height of almost 10 feet by the time she is fully grown.

The calf, who has not yet been named, has spent the first week of her life bonding with her mother and exploring her new home. 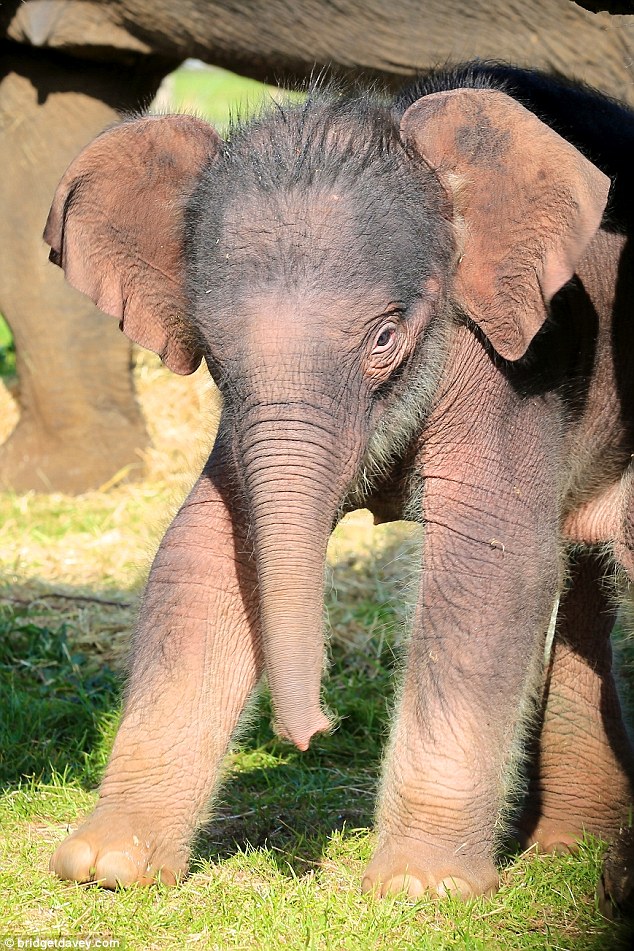 Steady now: The furry calf is up on its feet and walking just days after being born

She rarely strays from her mother’s side while Damini, which means electric, treads carefully around the newborn, always keeping her close.

The elephants live in two paddocks at the park spending around 16 hours each day grazing on nearby trees and logs.

The Asian elephant originally hails from Southeast Asia, Sri Lanka, and Indonesia. There are believed to be between 35,000 and 40,000 Asian elephants left in the world.

Terry Shelton, head of elephants, at the park said: ‘Damini has taken to motherhood fantastically. 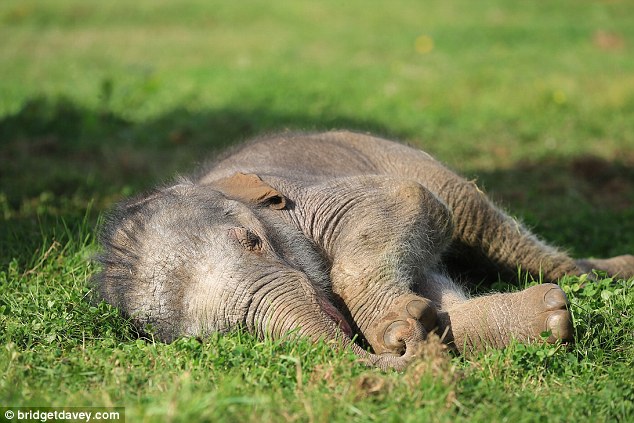 Tiring work: The baby lies down in the grass for a nap after a tough day up on its feet

‘She has been very relaxed, getting to know her newborn with gentle trunk touches whilst her new aunts, Chandrika and Yu-Zin, are able to watch the newborn take its first steps and suckle from Damini.’

The 15th Duke of Bedford, Andrew Russell, said: ‘The birth of our newborn elephant is a tribute to all of the elephant and veterinarian staff who have been working with and looking after Damini during her 22-month pregnancy.

‘It is a fantastic day for Woburn Safari Park and the ongoing conservation of these endangered animals.’

Woburn will be hosting a competition so that visitors can choose a name for the calf. The deadline for entries is November 7 with the name to be announced on November 22.