When you go on safari, you want to get a good view of the animals, and experience nature up close.

One motorist, in the Kruger National Park in South Africa, got more than they bargained for when they were trapped right in the middle of a pride of lions and a ginormous elephant.

The small blue car was powerless to move as more than a dozen large cats from the Vurhami pride lay in its path, with a tusked elephant blocking the route behind. 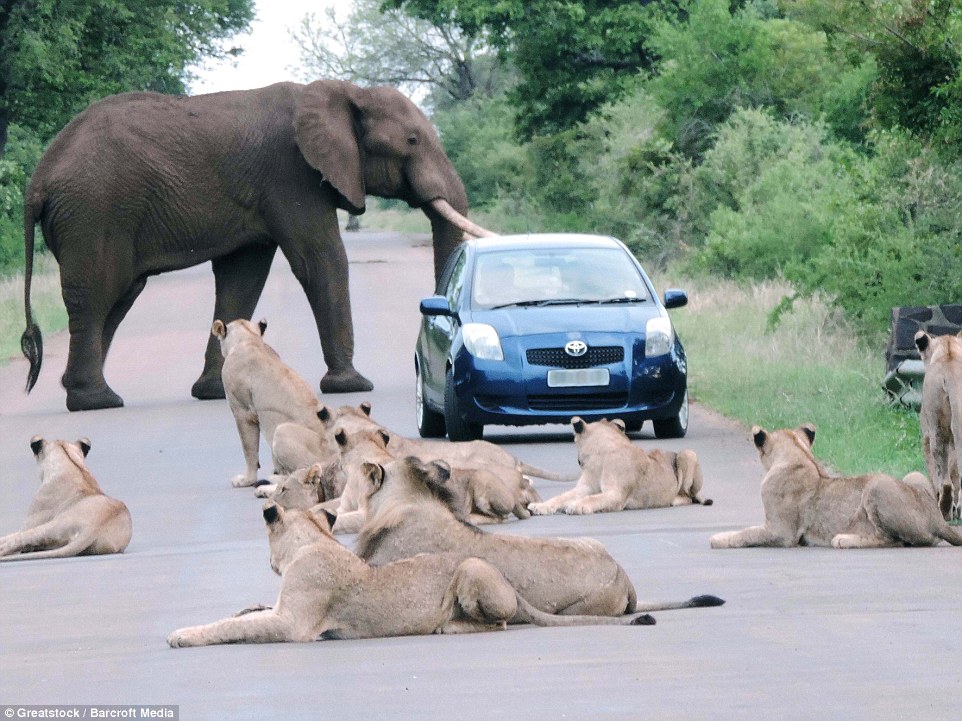 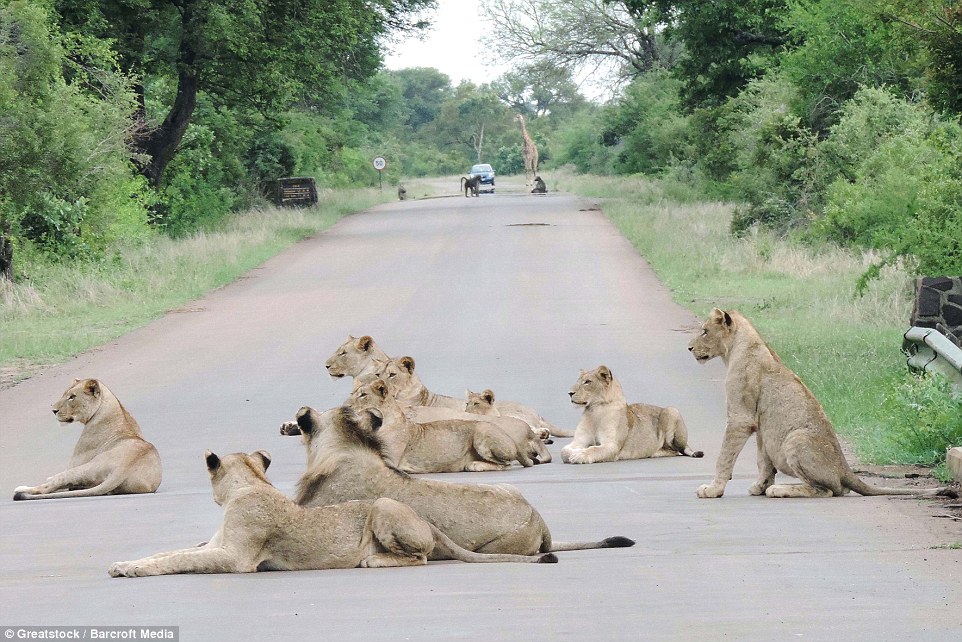 The photographs of the incident were taken by a housewife in another vehicle, who witnessed the scary encounter 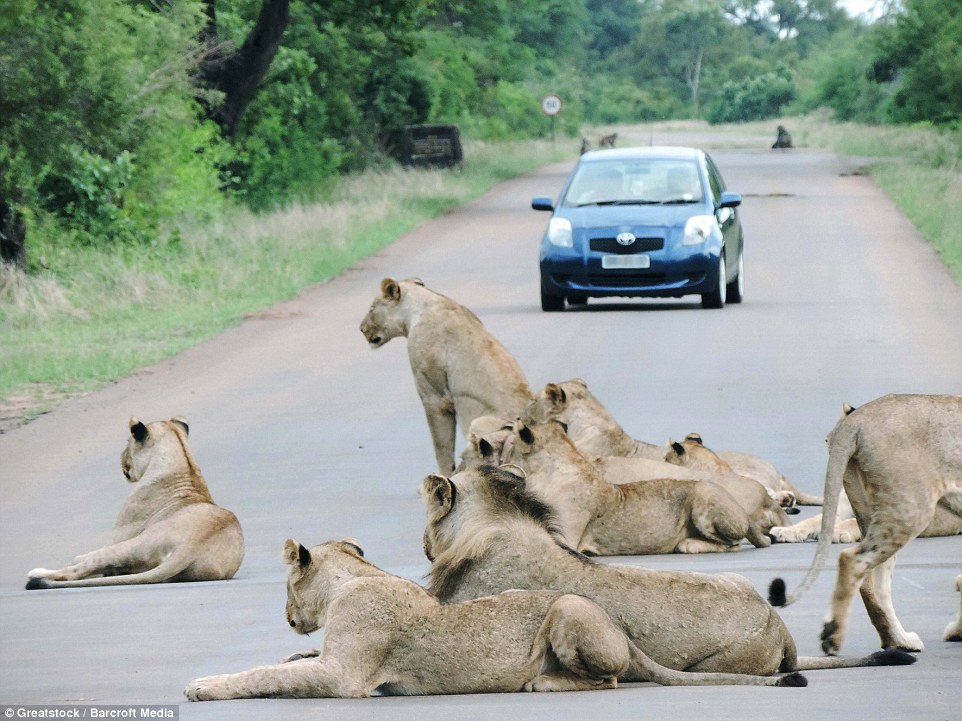 Just lion around! The driver’s path is blocked by a dozen cats, part of the Durham pride, relaxing on the safari road

Thankfully the car owner was in no danger and waited for the elephant to continue its stroll, before managing to escape around the lazy cats.

The dramatic photographs were taken by housewife Stella Stewart in 2013 and have only recently come to light.

The 59-year-old housewife who took pictures from the car opposite said the motorist was in no danger.

She said: ‘There was no aggression from either the elephant or lions so I was more interested in how long she would have to wait for the lions to move over.

‘She wasn’t ever in danger. The elephant didn’t even give it a second glance.

‘But the lions on the other hand were very wary of both the car and elephant.

‘I’ve seen lions and elephants roadblocks but never together and a car stuck between them.’

As the elephant slowly ambled to the other side of the road the driver, who has not been identified, calmly swerved around the side of the pride to avoid the lethargic cats. 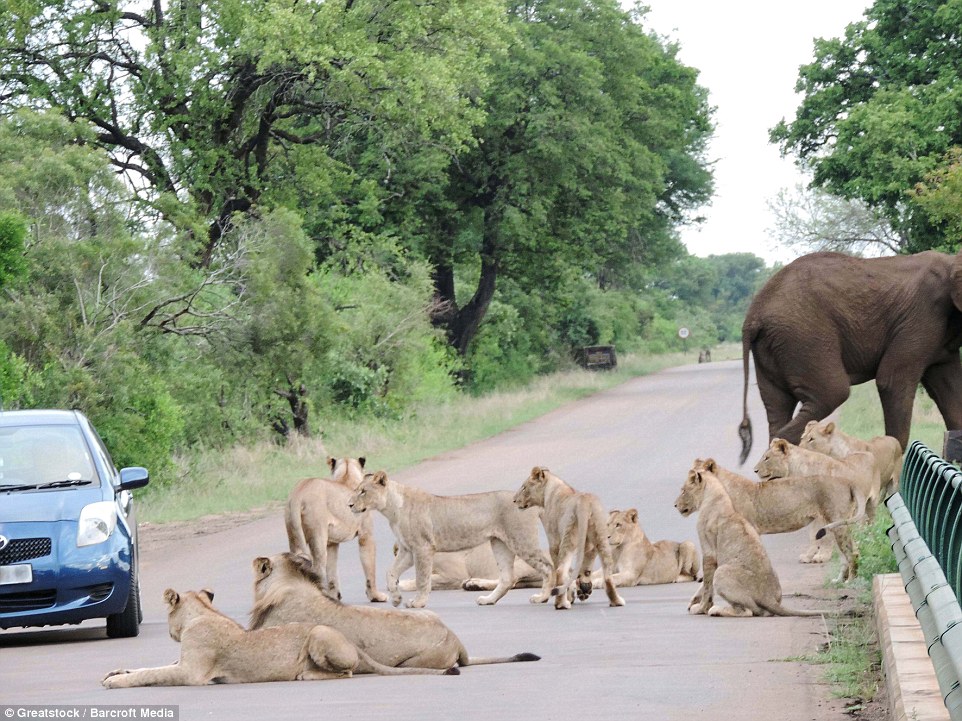 Phew! Thankfully the giant elephant ambles across the road allowing the small car to reverse and escape around the pride of lions

Going neck to neck: Two 20ft giraffes slug it out in heavyweight b.a.t.t.l.e to win right to m.a.t.e with female